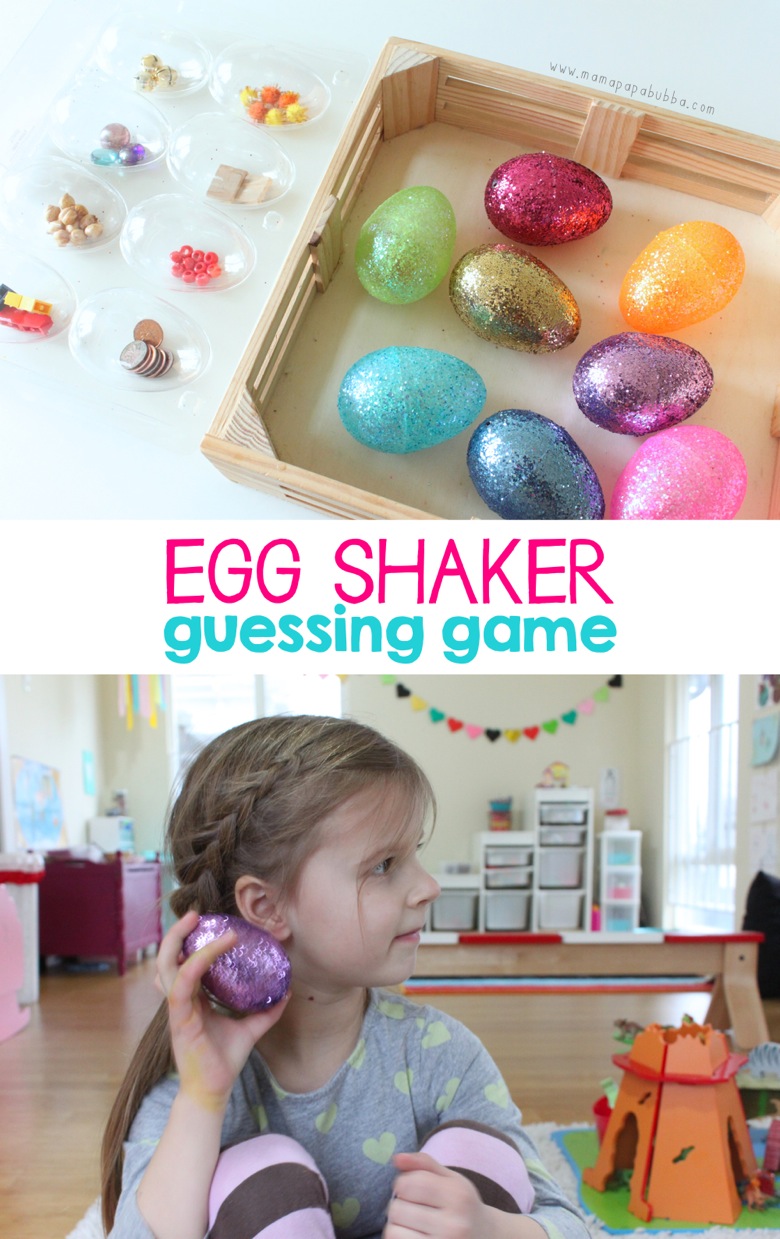 I know that it’s sort of hard to believe {even for me!}, but this past weekend I went out for a good 5 hours all by myself {the perks to having a NICU babe – he’ll happily take a bottle!}  So what did I do with my time?  Well truthfully, I got groceries and did a little bit of shopping, but since I went across the border, it meant Trader Joe’s and Target, which is super exciting in this mom’s books. ☺ 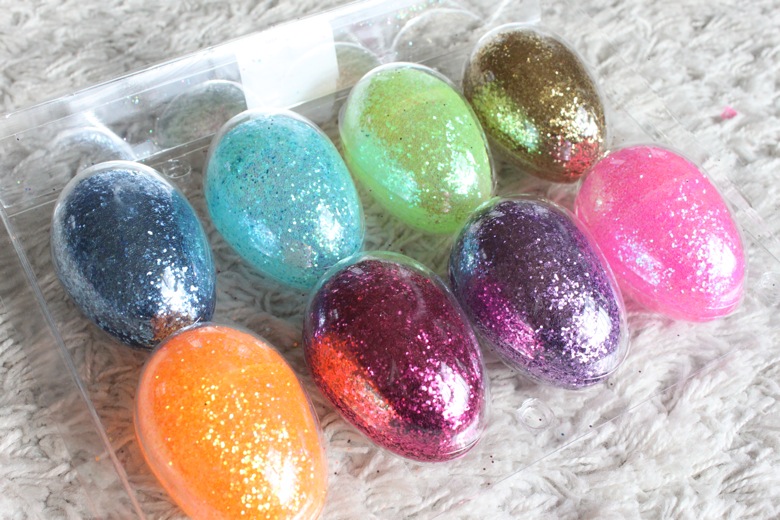 Target already had tons of fun Easter stuff out, and since I rarely don’t have Miss G with me, I decided that I’d pick up a bunch of stuff for the munchkins’ Easter baskets and be ahead of the game {for once}.   One of my favourite finds?  These super glittery eggs.  And because they’re waaaay too cute to be tucked away in a closet until the end of March, I decided we’d use them to play some fun games in the meantime.  First up, an egg shaker guessing game focused on listening. 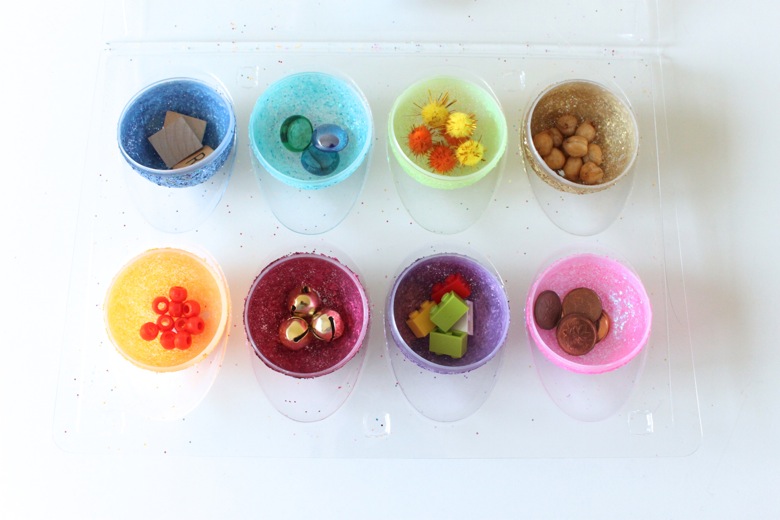 While Miss G was having her daily quiet play time, I scrounged around the house for small objects made of various materials to hide inside the eggs.  I wanted the sounds to be as distinct as possible, so I aimed to find things that were quite different from one another. 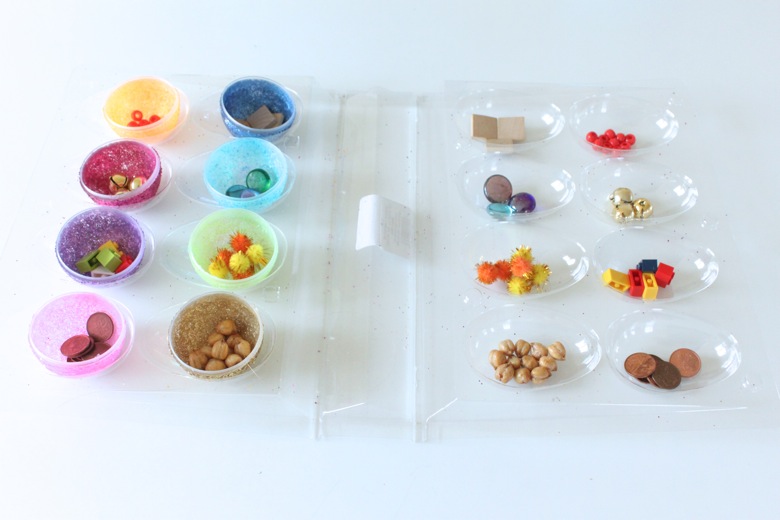 While I was filling the eggs, I filled the egg casing with the same materials too, figuring the casing could be my ‘clues’ once the game was in progress. 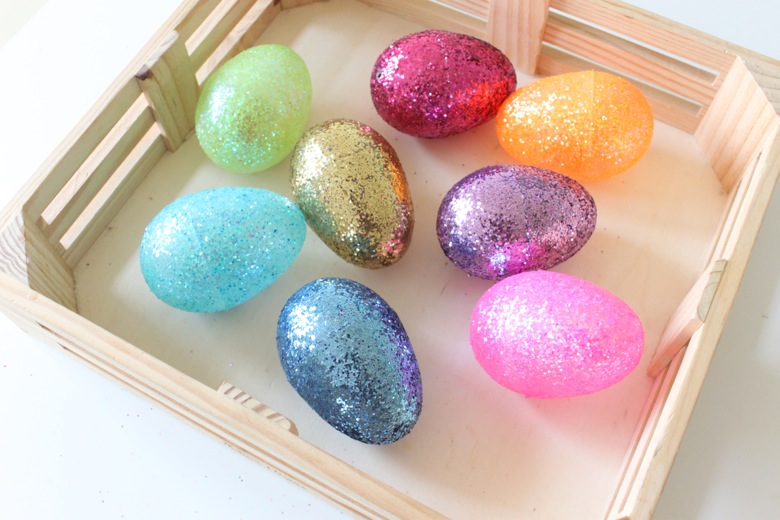 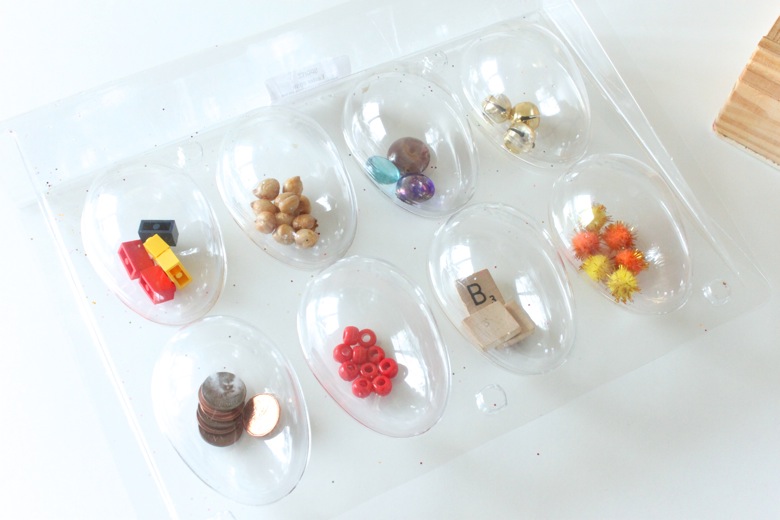 With the eggs and casing filled, I simply closed everything up and we were ready to go. 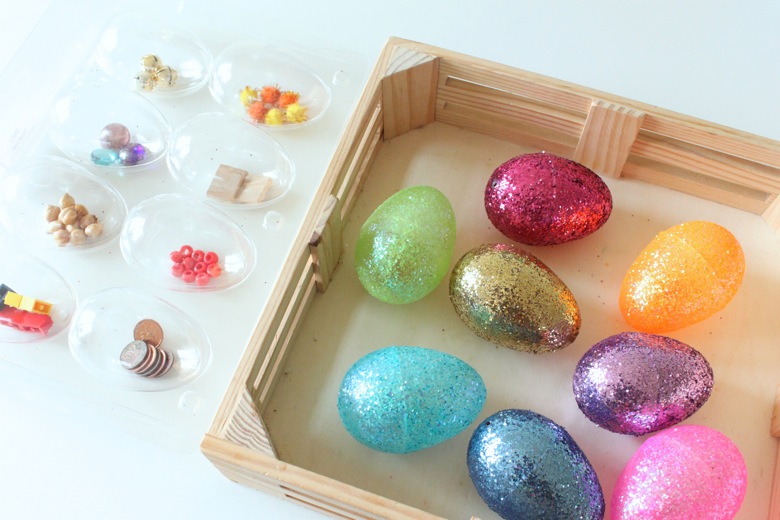 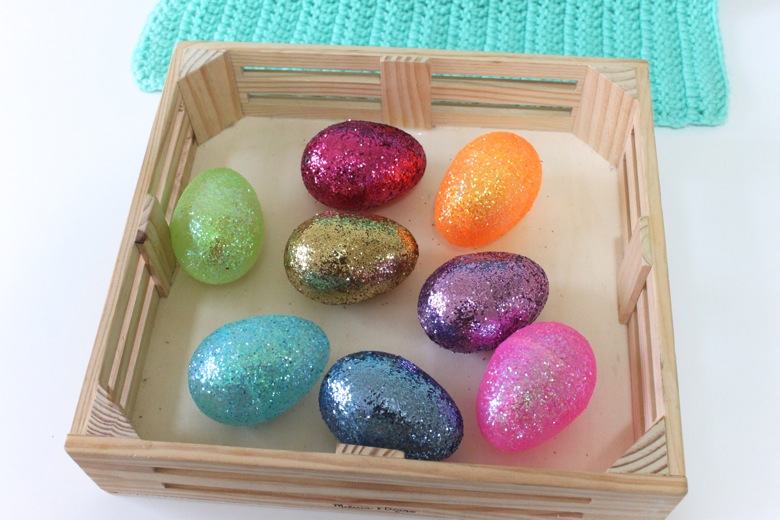 When Miss G was ready to play, I passed her the wooden crate full of egg shakers and kept the clues hidden under a little blanket behind me.  I explained that each egg had something different inside and that if we listened very carefully, we might be able to figure out what they were filled with… 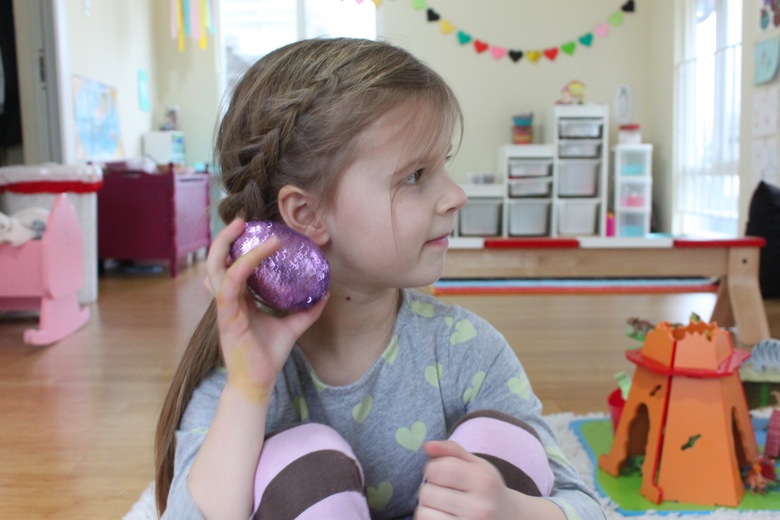 And the shaking and swirling and listening began. 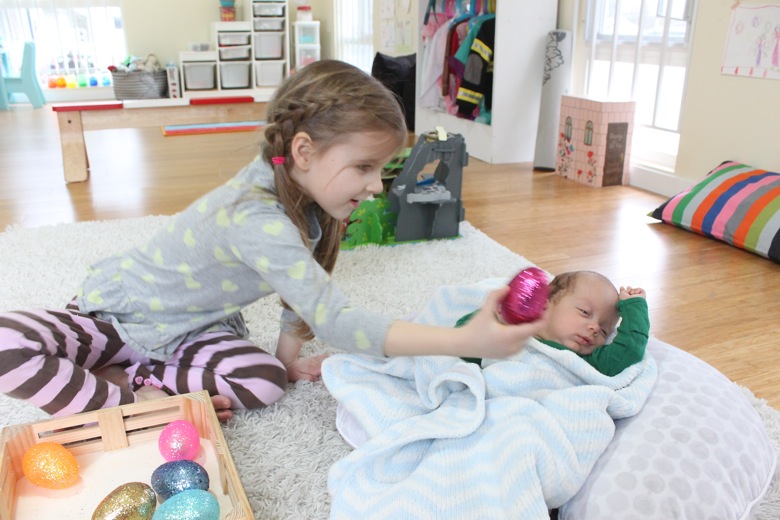 Even poor sleeping little brother got to have a listen. 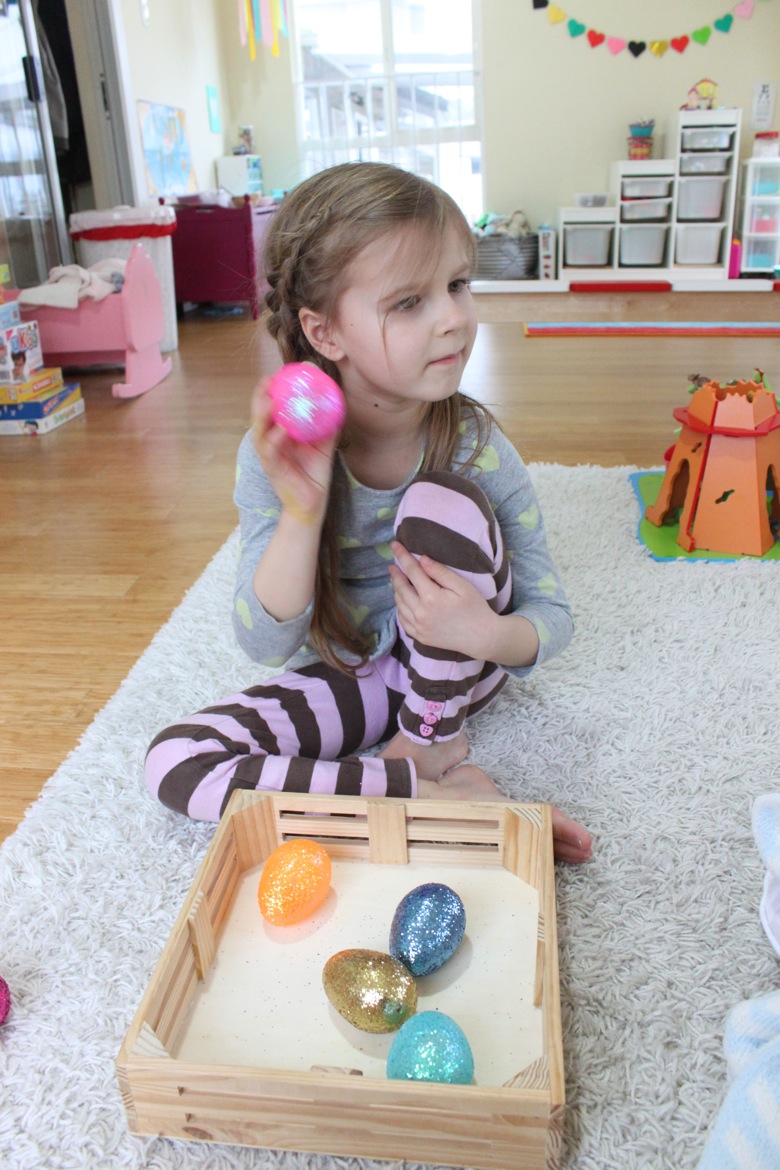 With each egg she made a guess – beads, buttons, coins, bells…  Some were off, but many of them were actually right! 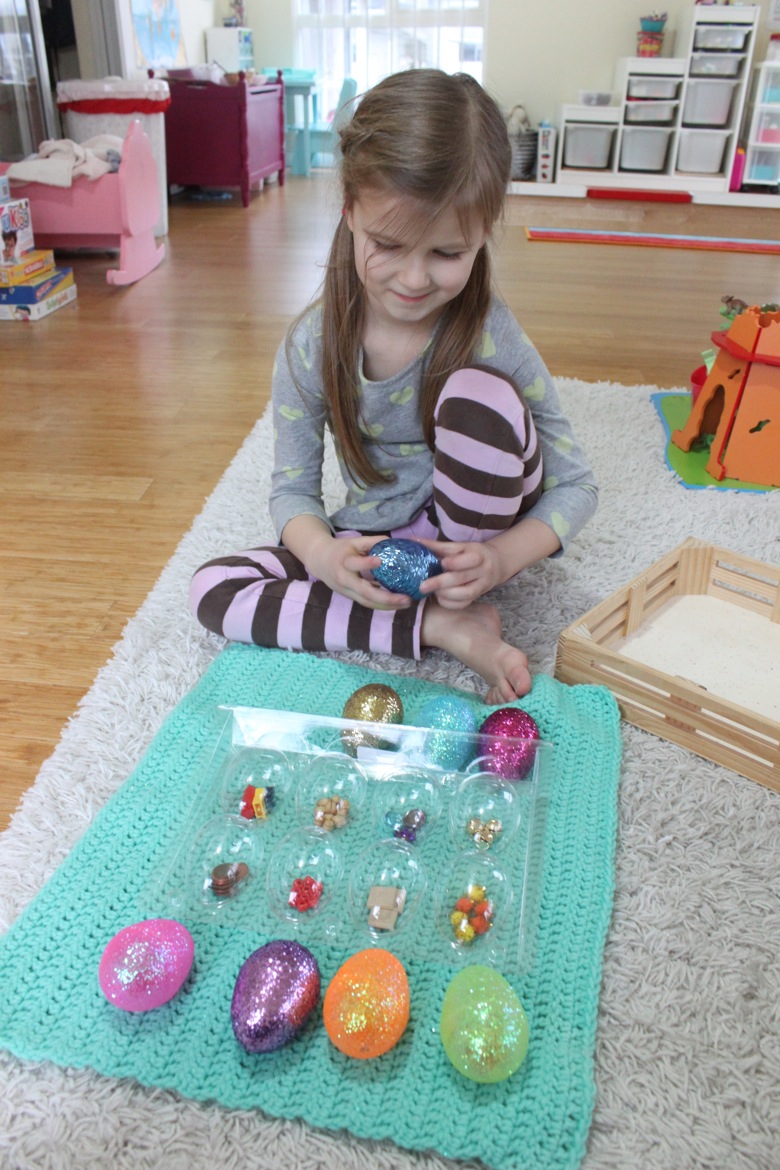 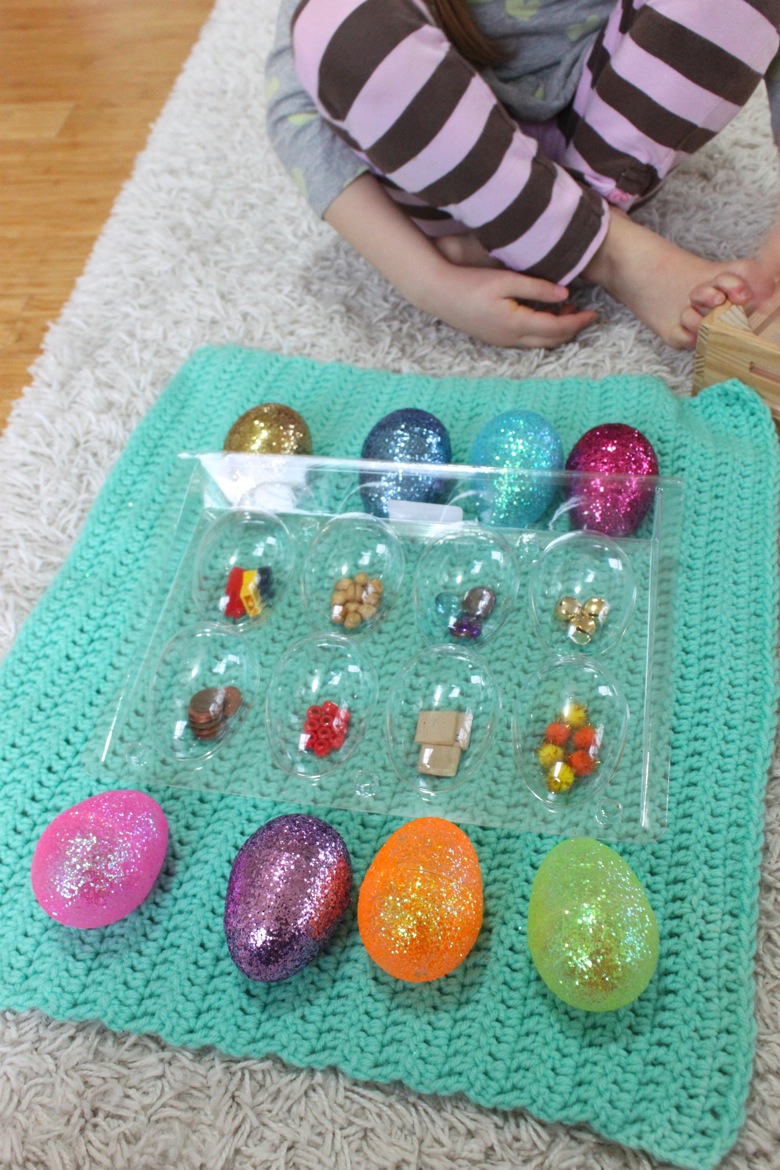 After she’d had a chance to make all of her guesses, I brought out the container and she decided that she’d match them up.  A couple were tricky, but she was pretty good at starting with those she was fairly confident about and then using deductive reasoning to figure out the others. 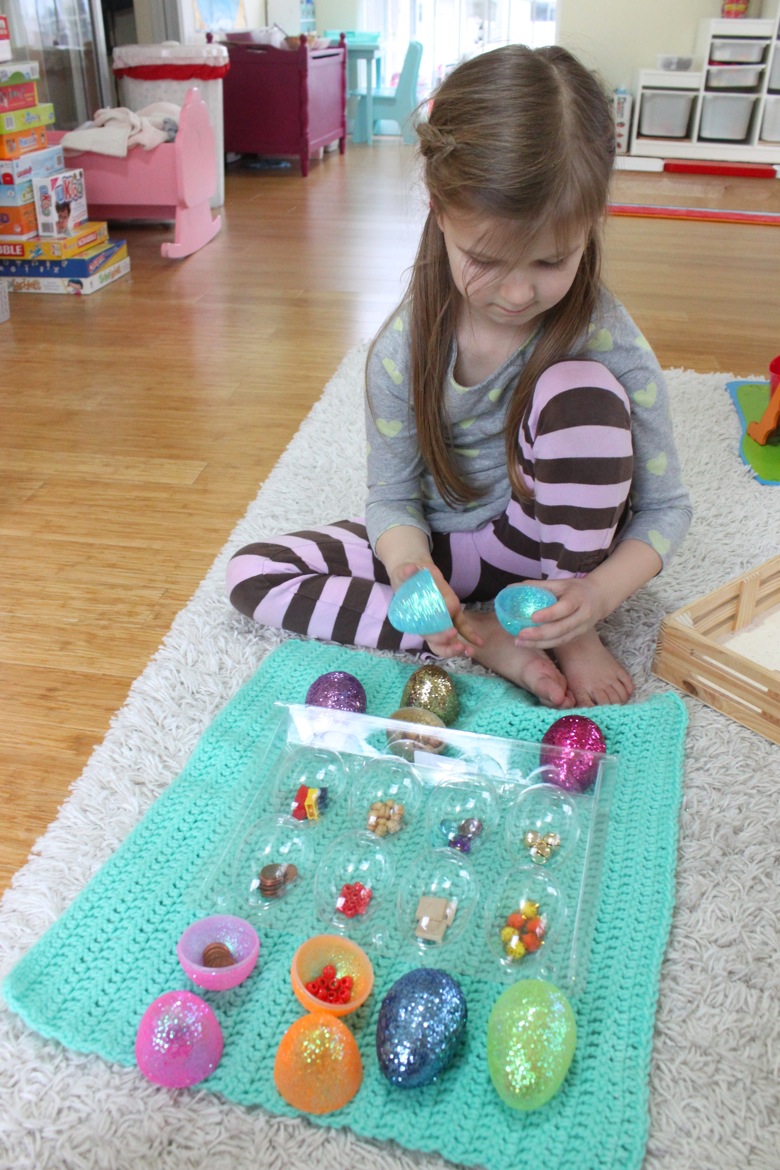 Afterwards, we opened each one to see whether or not she was correct.  If there was one in the wrong spot, she’d move it to the correct spot, then shake, listen, and shuffle until satisfied before opening the next. 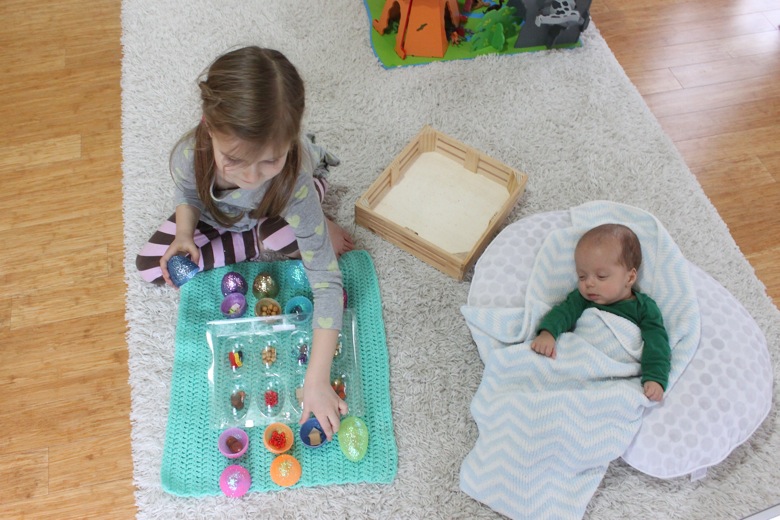 Once done, she packed everything up to challenge her papa with upon his return from work…  We’ll have to see how he does! ☺