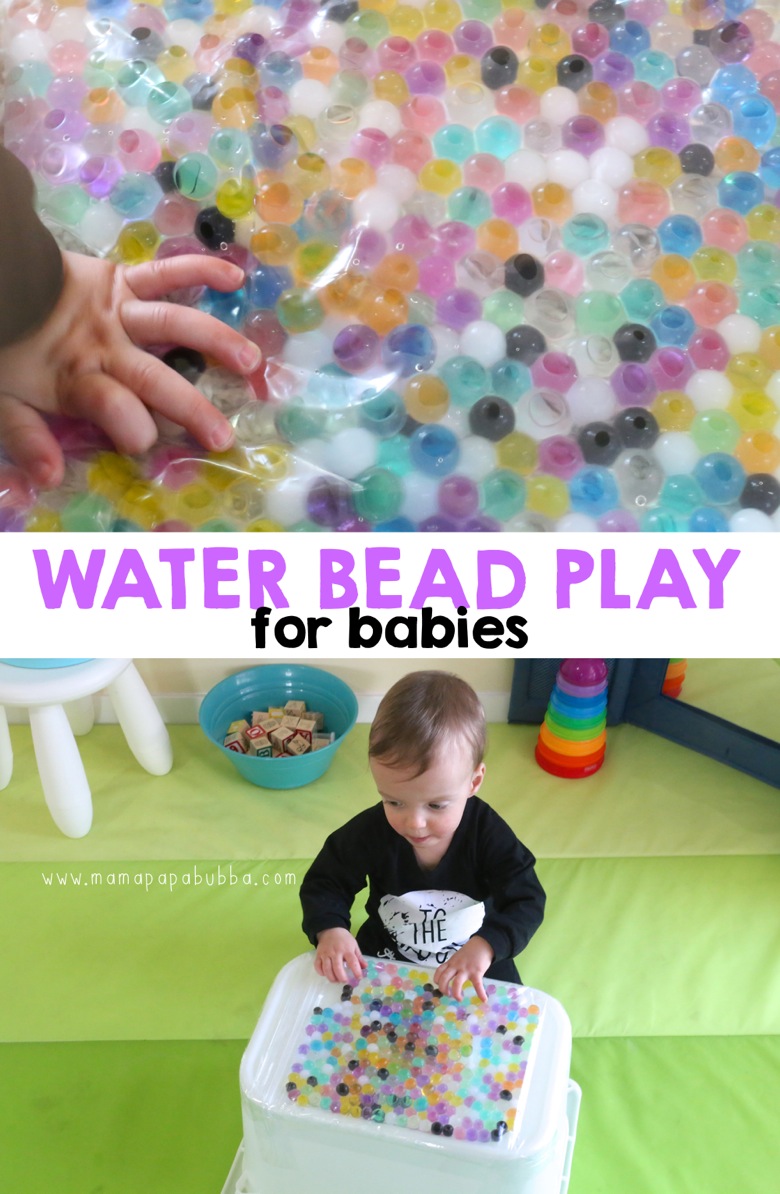 I love, love, love water beads and because Sam absolutely loves anything big or small that is ‘ball’ shaped, I knew he’d love them too.  The trouble is that we’re still very firmly planted in the put everything in the mouth stage.  Old food bits on the floor, dry crunchy leaves, shoes, tissues, sand…it all goes straight into his cute little mouth.  So we’re definitely not ready for a water bead sensory bin just yet.  That being said, a water bead sensory bag – YES!  Putting different activities and materials into a large zip-close bag and taping the top shut is my go-to move when it comes to fun for this little one of mine.  It allows him to explore so many things that would normally either be unsafe or at the very least, extremely messy {not that there’s anything wrong with mess – getting messy is important too} and this little water bead play for babies set-up has been a total hit so far! 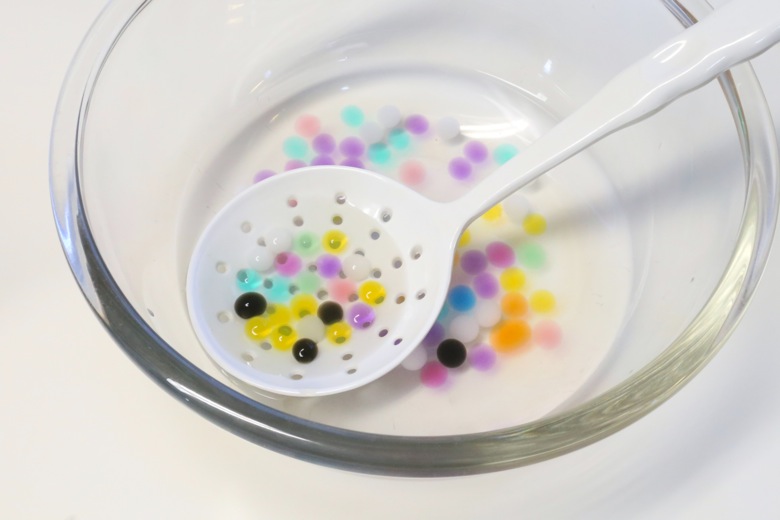 To put it together, I simply soaked some water beads I’d purchased on Amazon…  I chose these because I thought it was so neat that the company offered both white and black beads which are sort of unusual, but you can also find them on Water Beads Canada and from dollar stores and craft stores too. 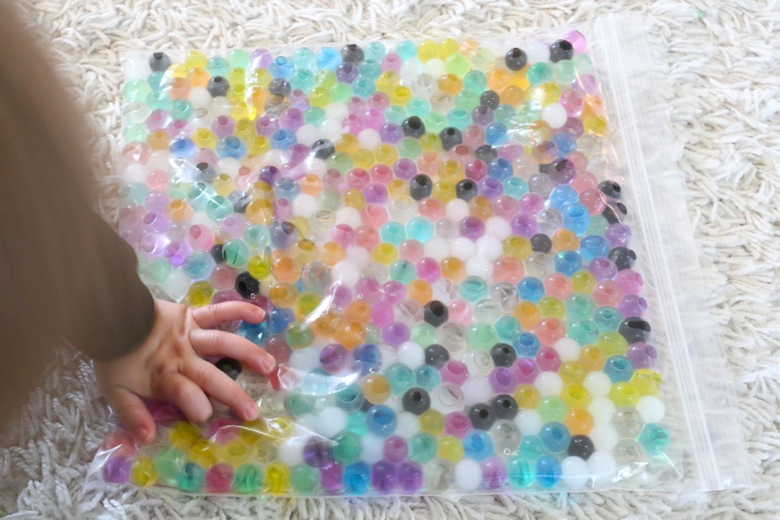 Once they were the size of traditional marbles, I scooped the beads out into a large clear zip-close bag and added just a little bit of water for some extra movement and squishiness.  Then I used clear packing tape to seal up the top of the bag so there was no chance of curious little hands ripping it open.  I often tape the sides of the bags with packing tape too just to give the seams a little added strength, but I had a very excited little boy who was ready to play today, so I skipped that step this time around. 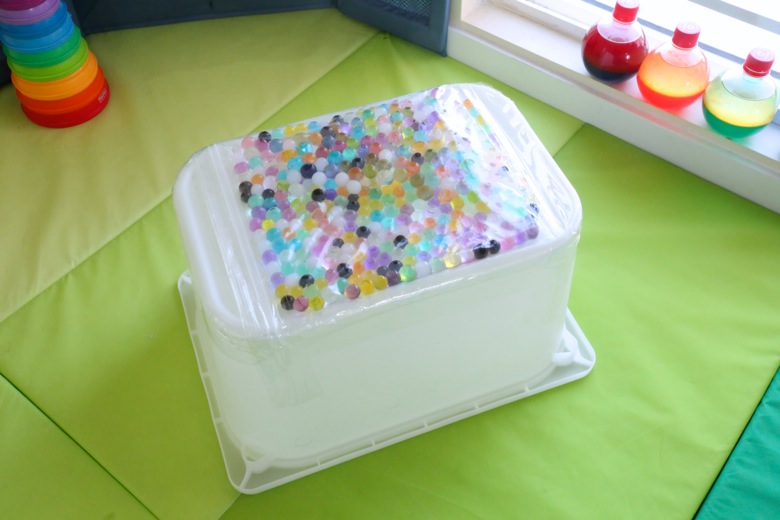 Now so far, I’ve taped our sensory bags to the floor {to encourage all of that tummy time we desperately needed in the beginning} or to the wall {to encourage the sitting skills we were working on more recently}, and I could have done either one with our bag full of water beads this time around, but since Sam is loving being on high knees, in squatting position, and in standing position, I decided to create a little water bead table instead.  I used a just used one of the bins from our Ikea toy organizer, but had I had something just slightly taller near by, I probably would have used that instead.  Either way, this has worked out really well so far. 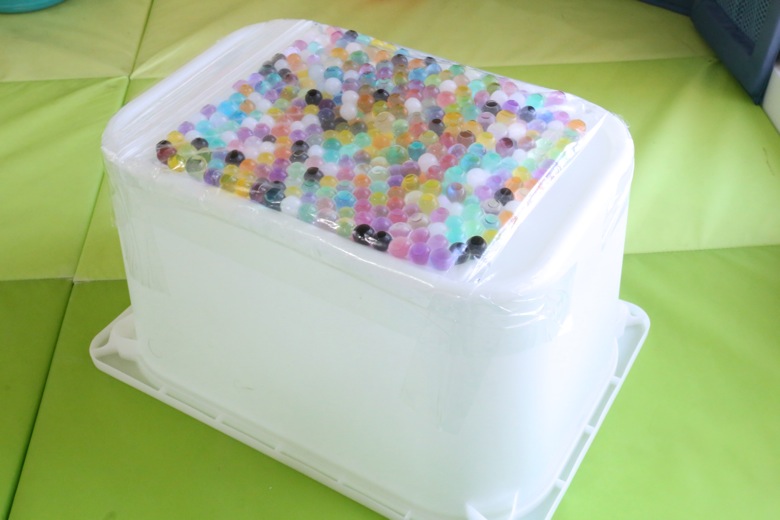 To make sure everything stayed in place, I simply used packaging tape to secure each of the four sides of the bag, and then did one big strip of tape along the top edge of the bin. 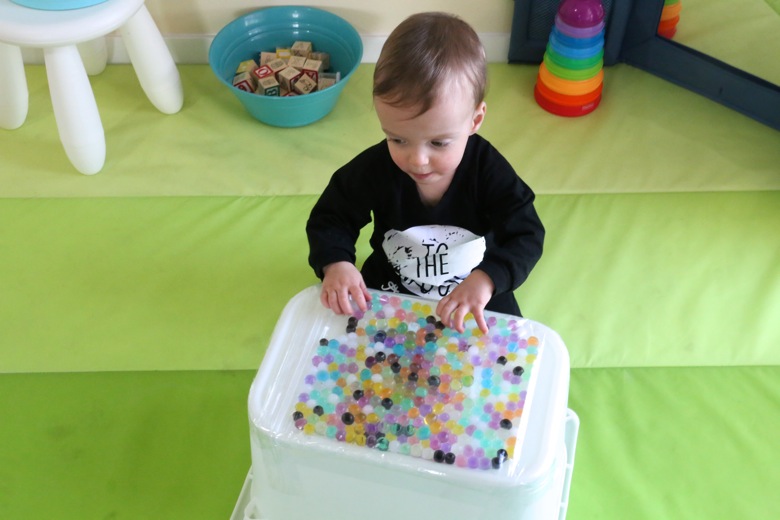 Sam wasted no time checking out the new contraption in his play area. 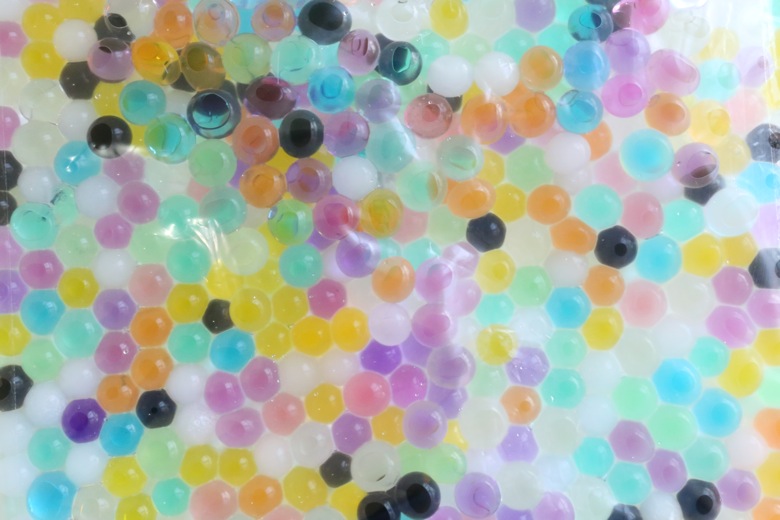 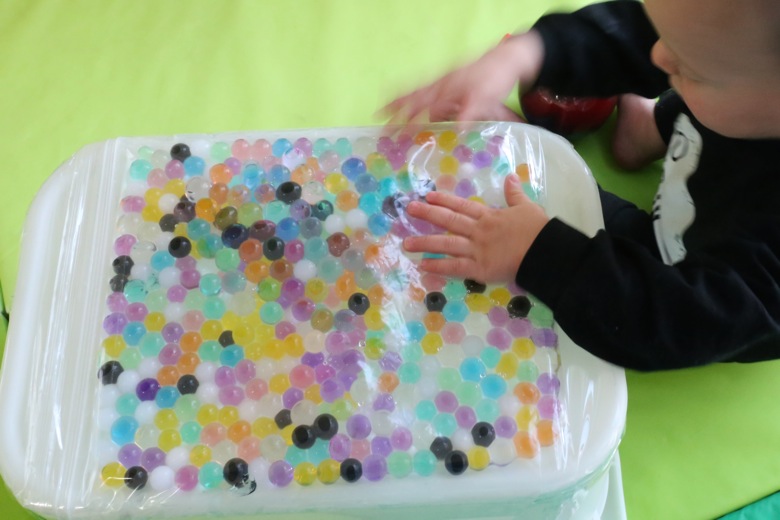 Here he is at play… 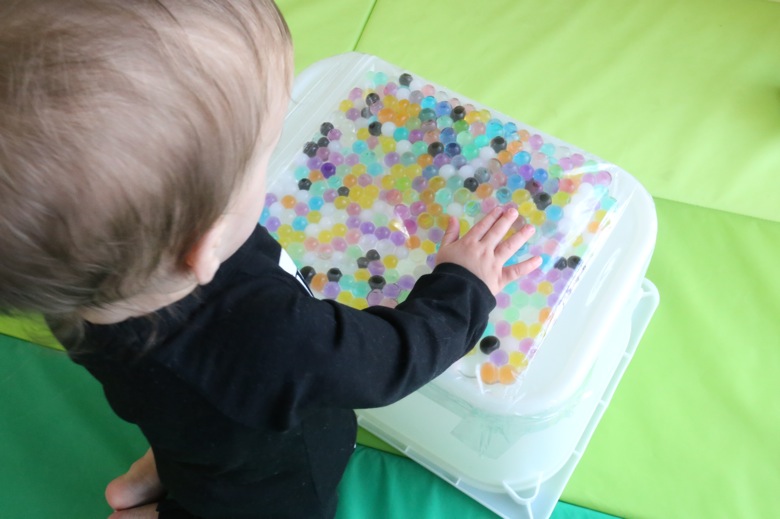 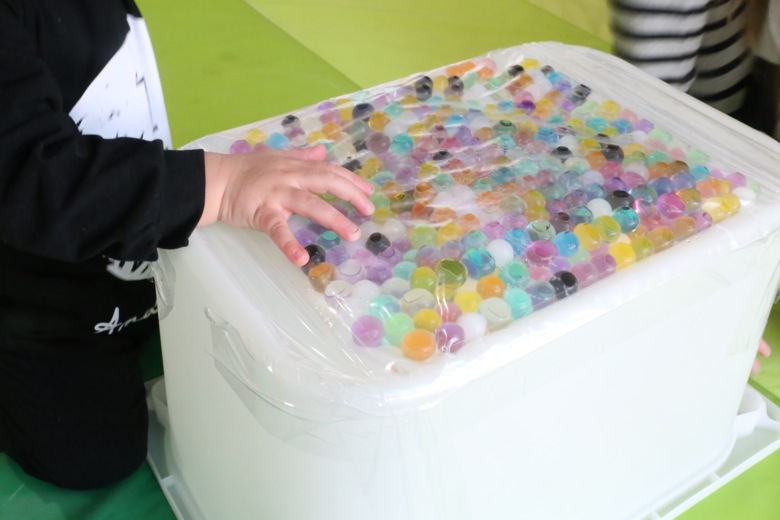 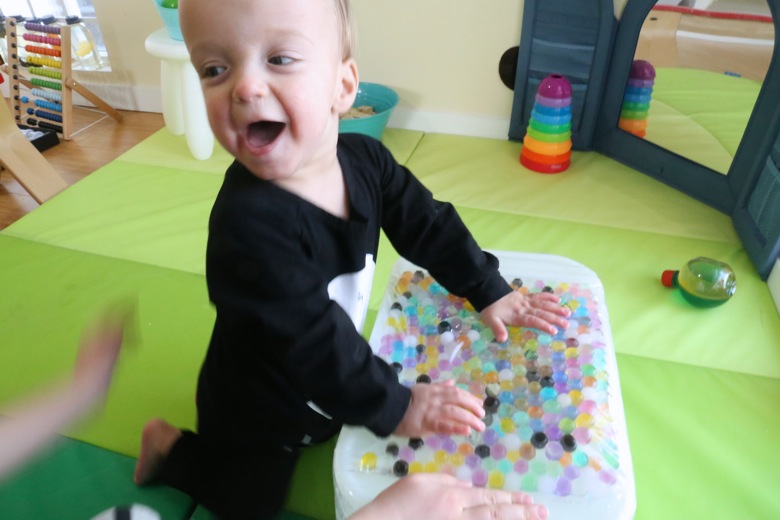 Having SO much fun! 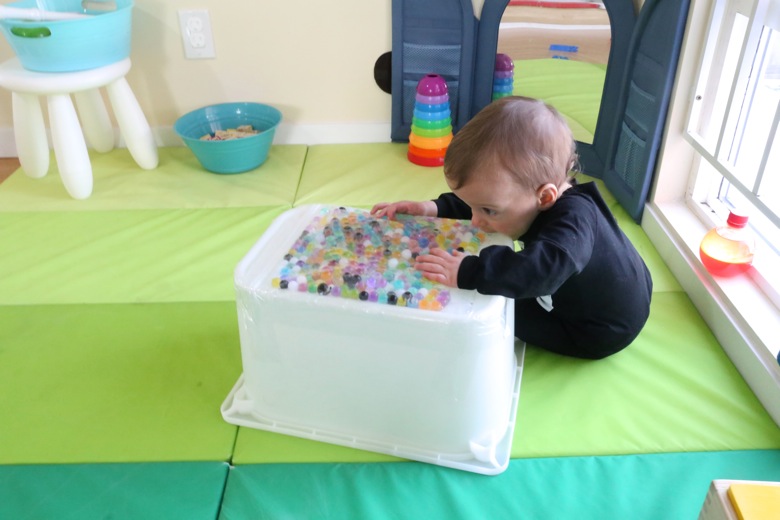 And while he did briefly gnaw on the corner of the bin itself and attempt to actually chew on the bag of water beads, because everything is secured down so well, there’s really nothing to bite. {Plus I’m always right there watching him play.} 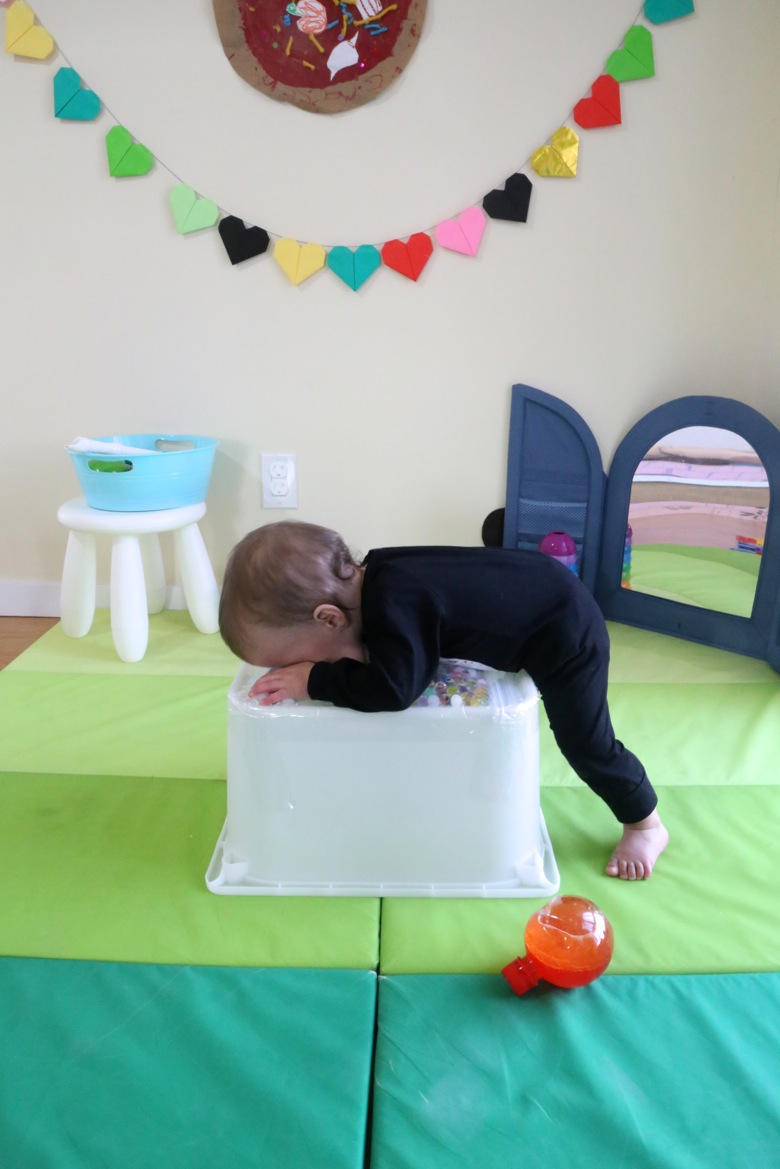 One thought on “Water Bead Play for Babies”