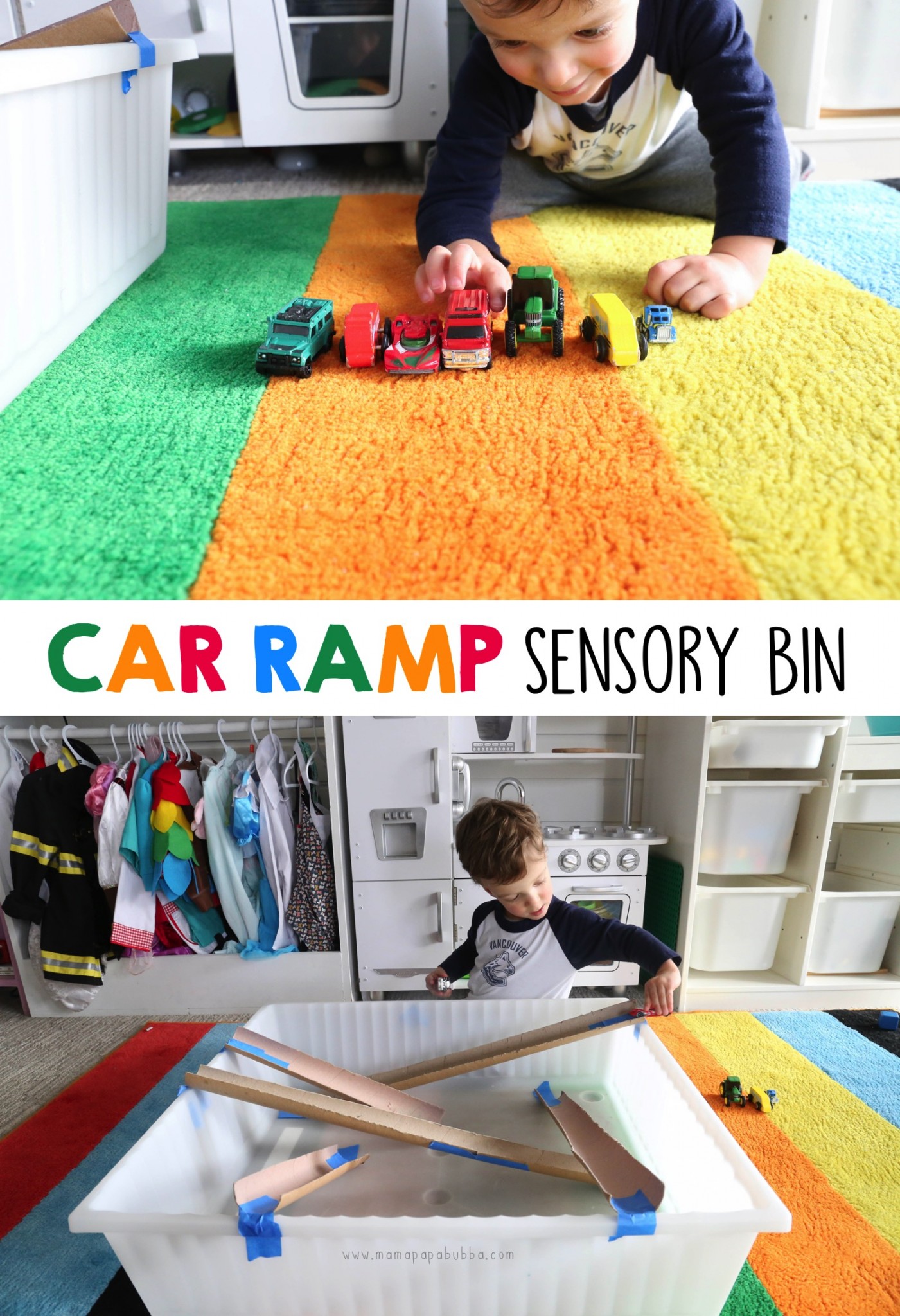 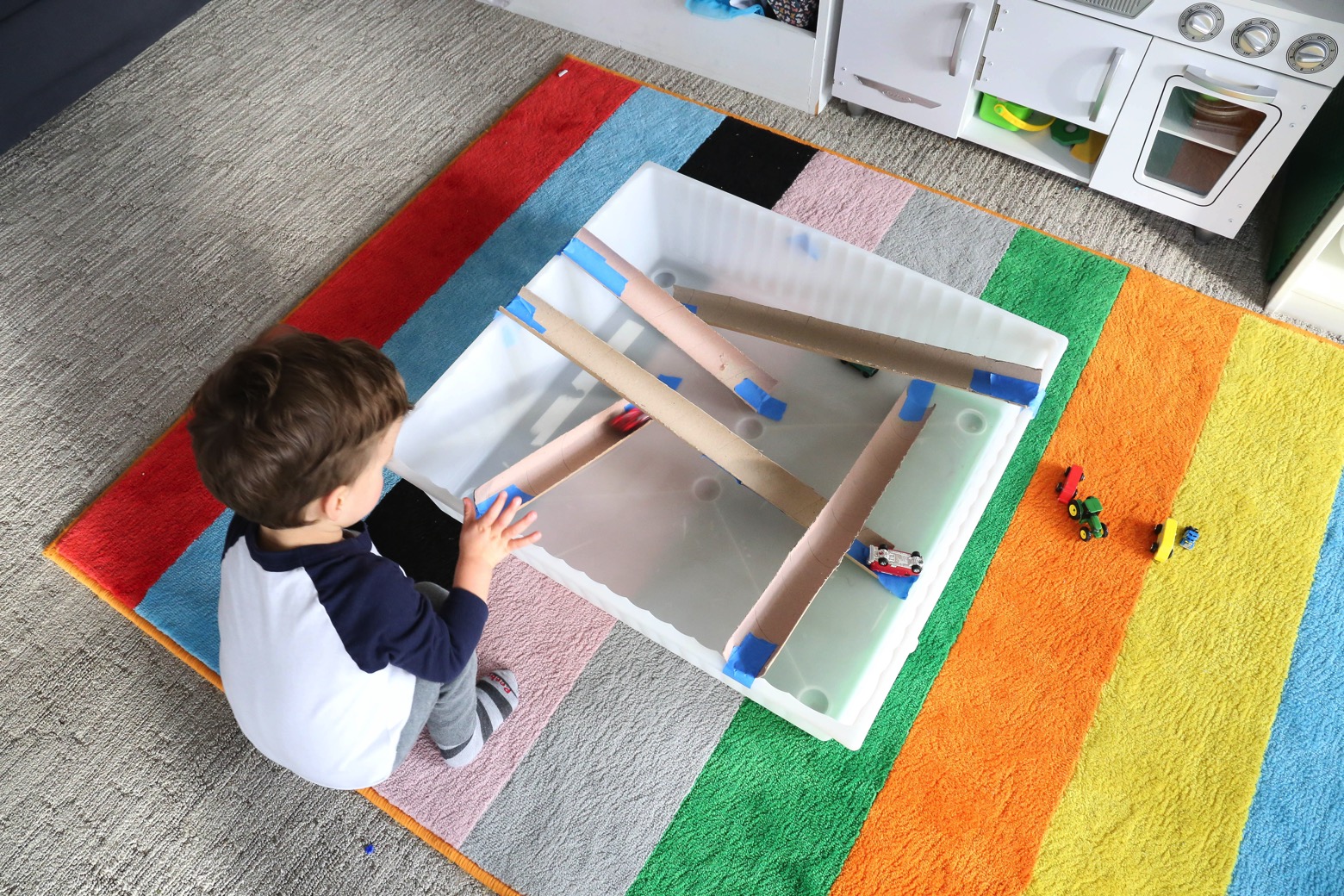 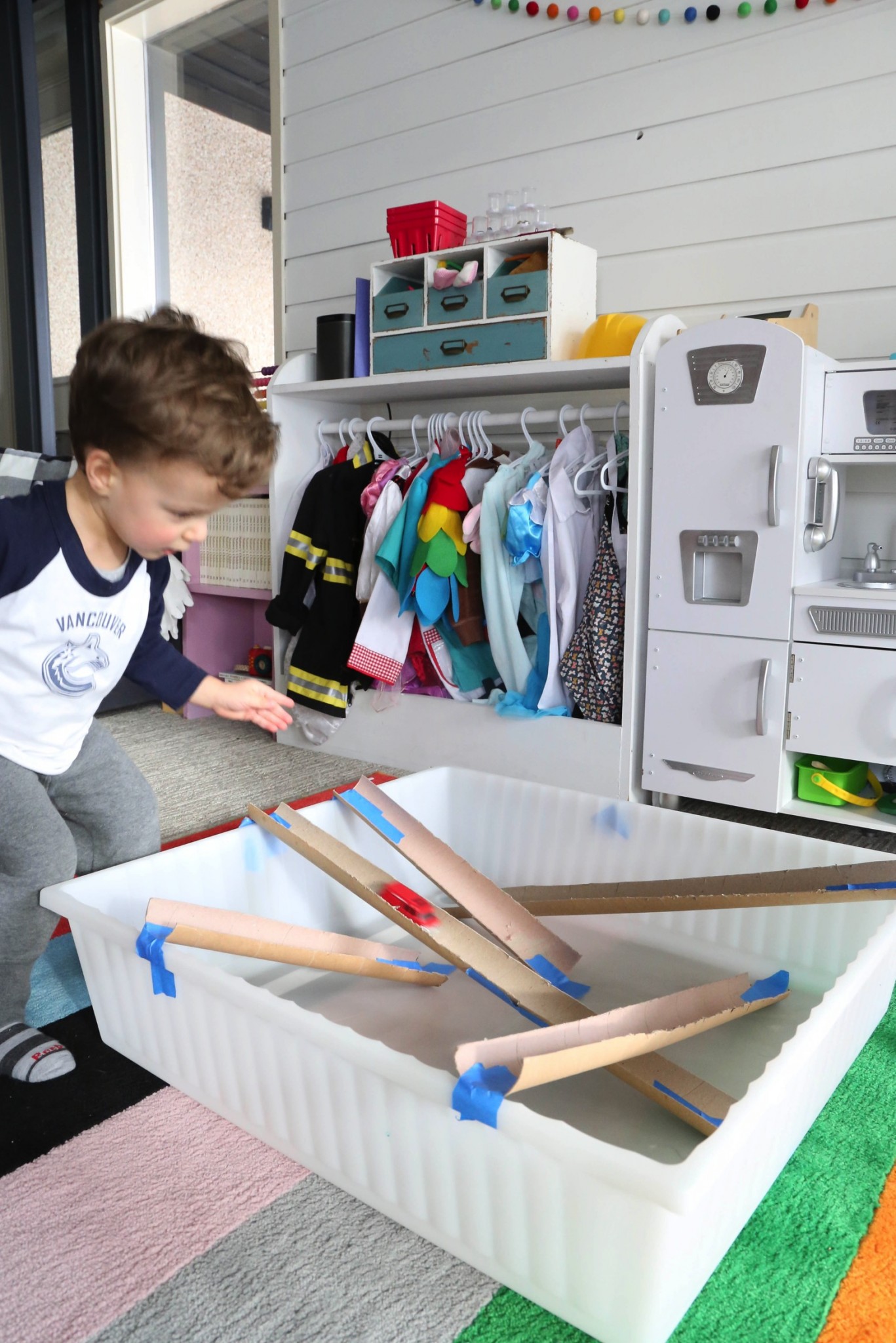 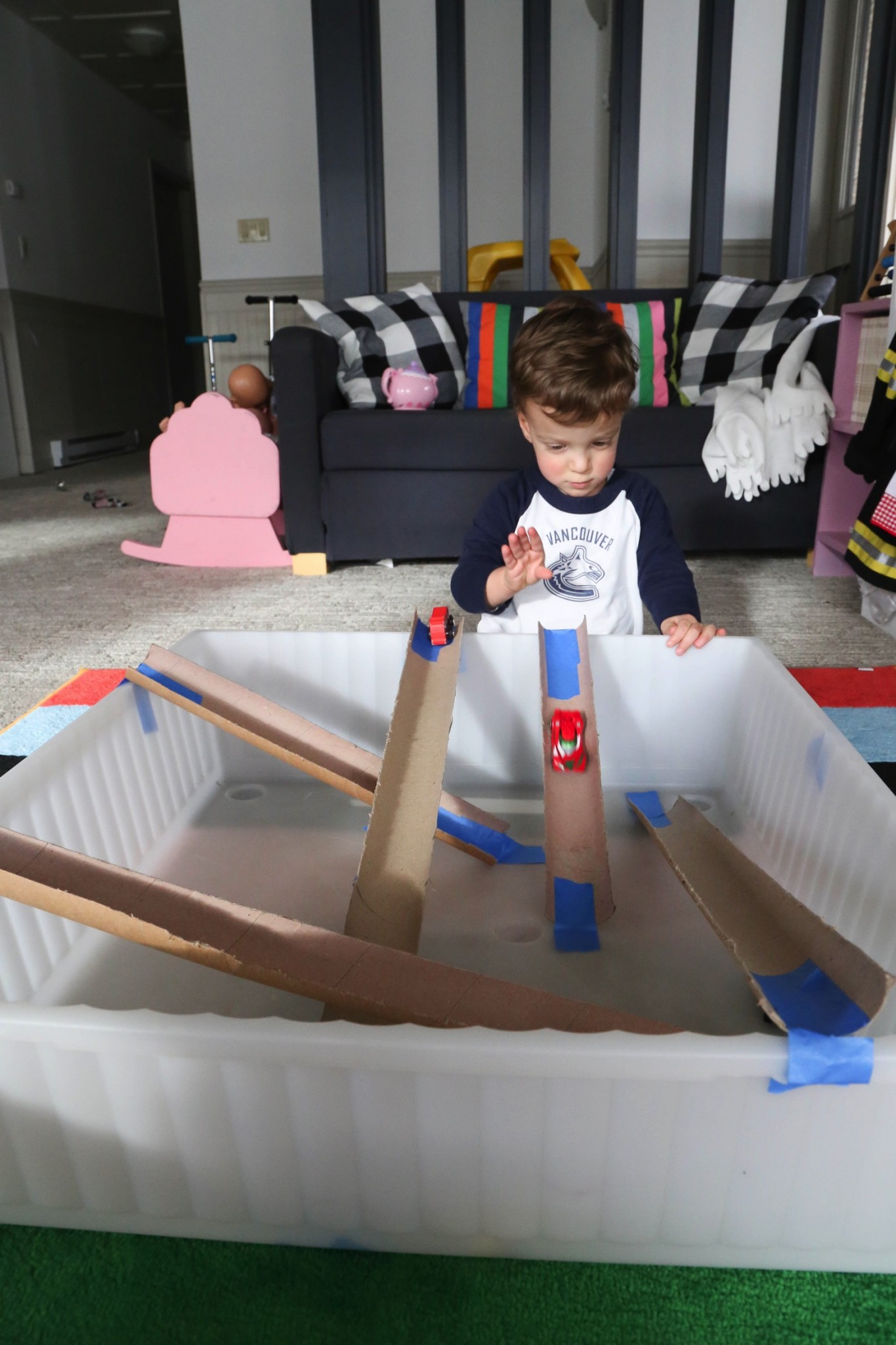 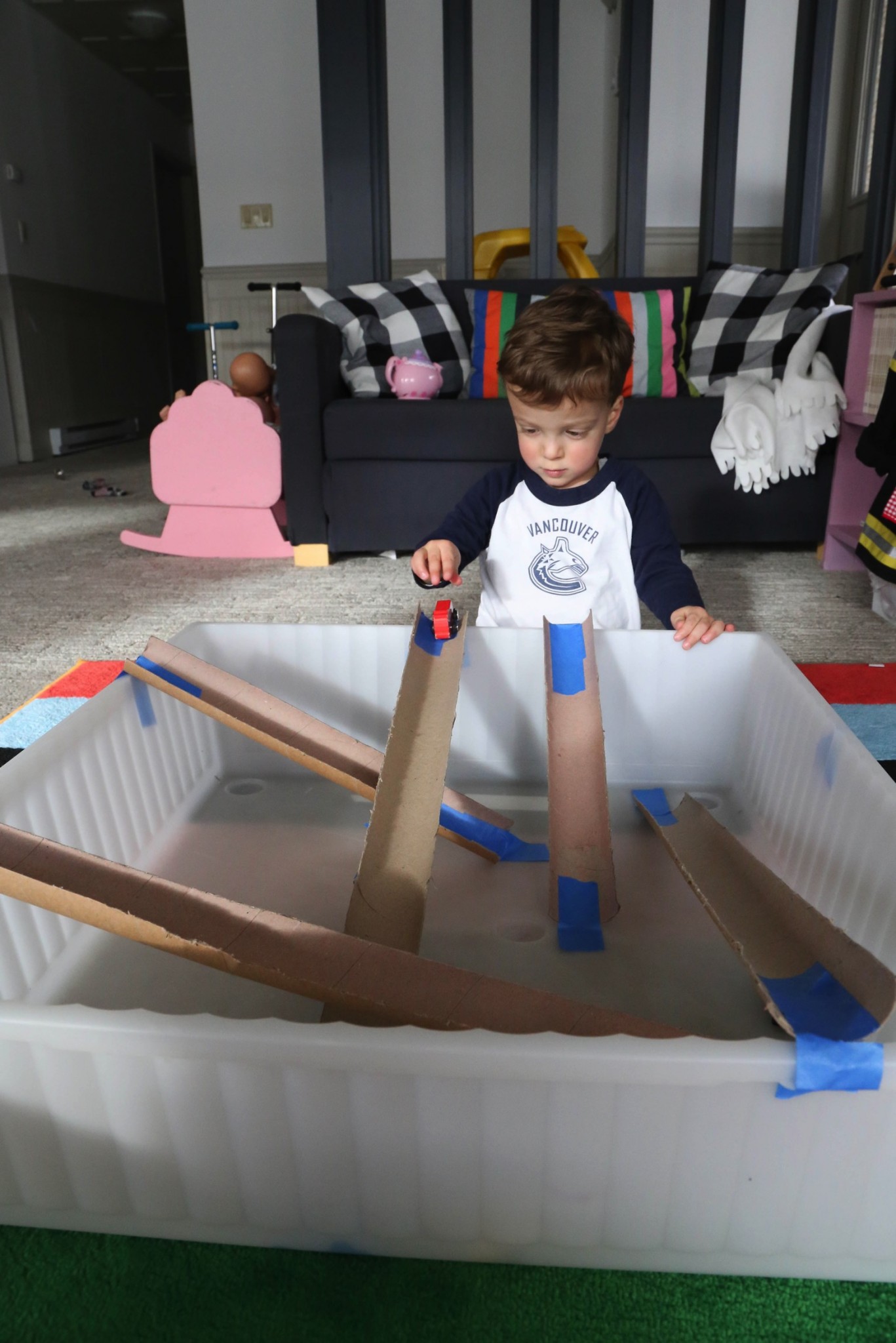 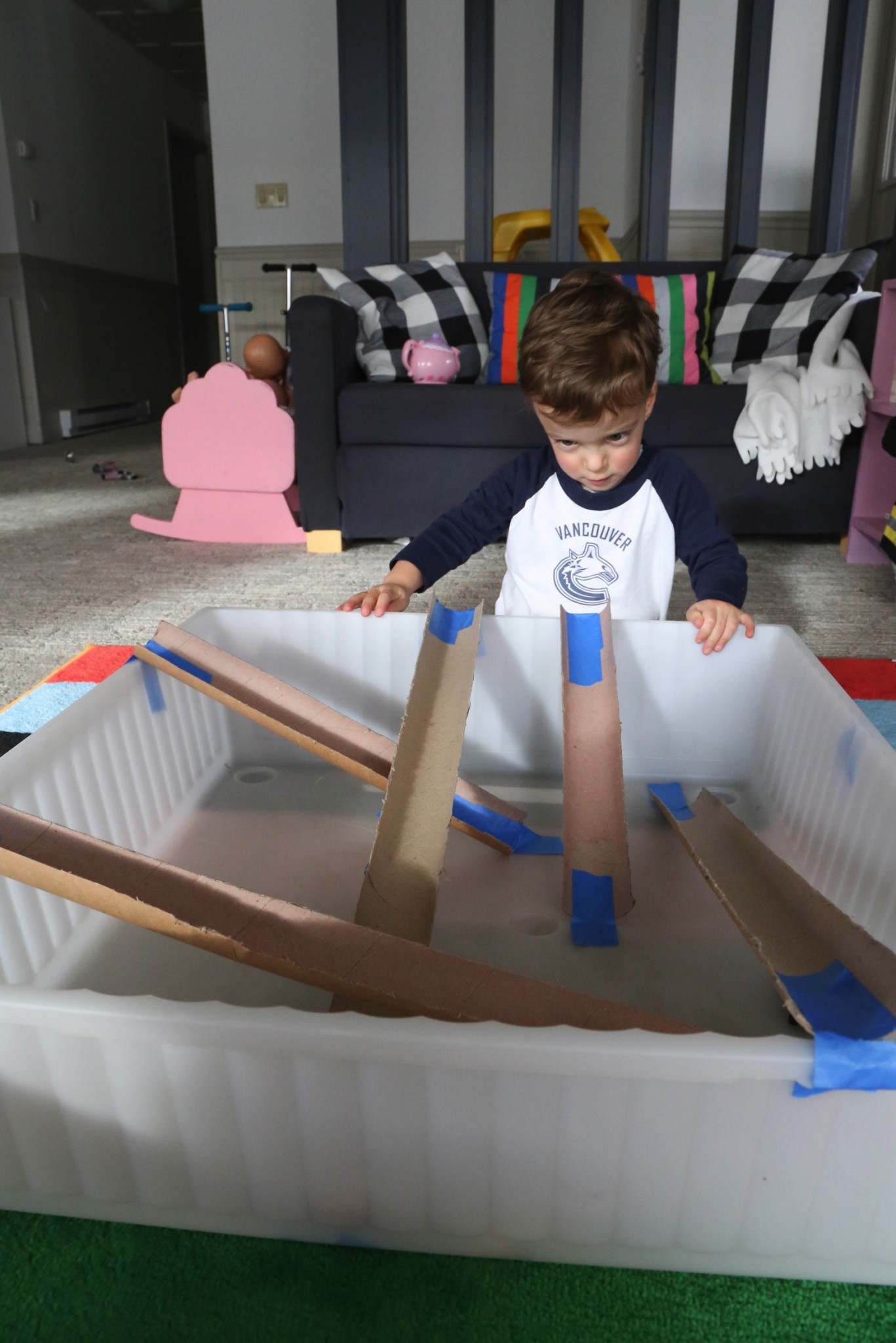 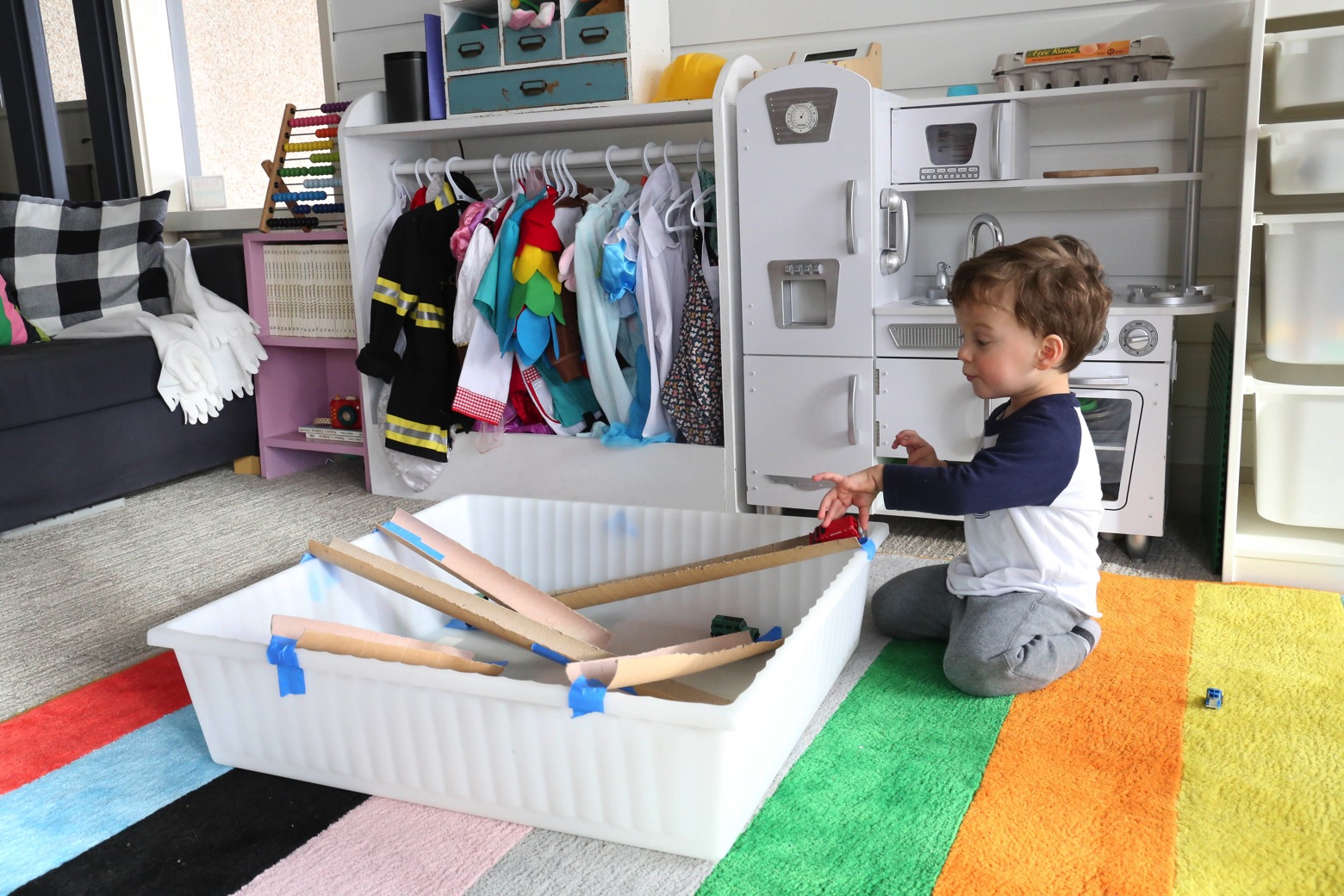 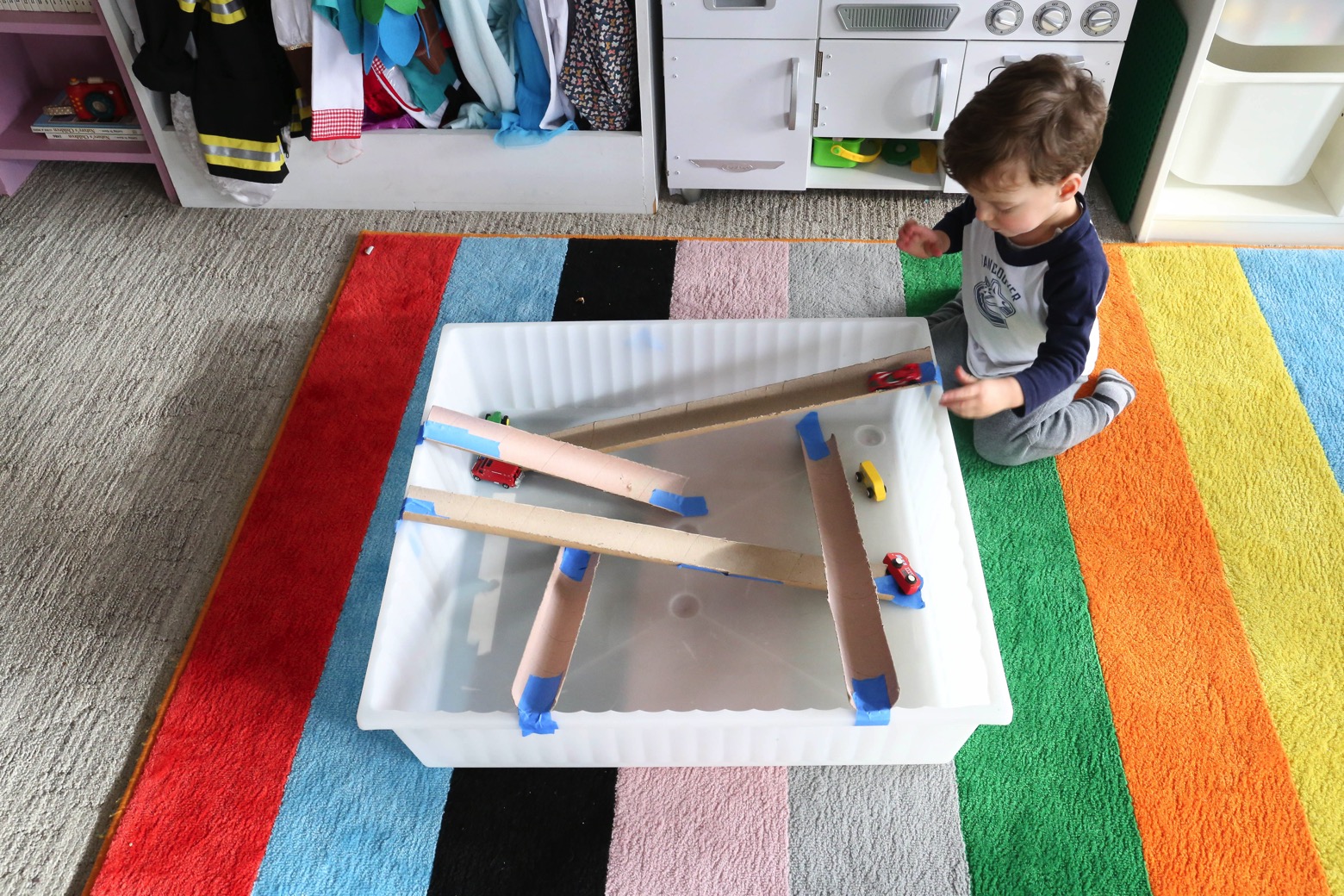 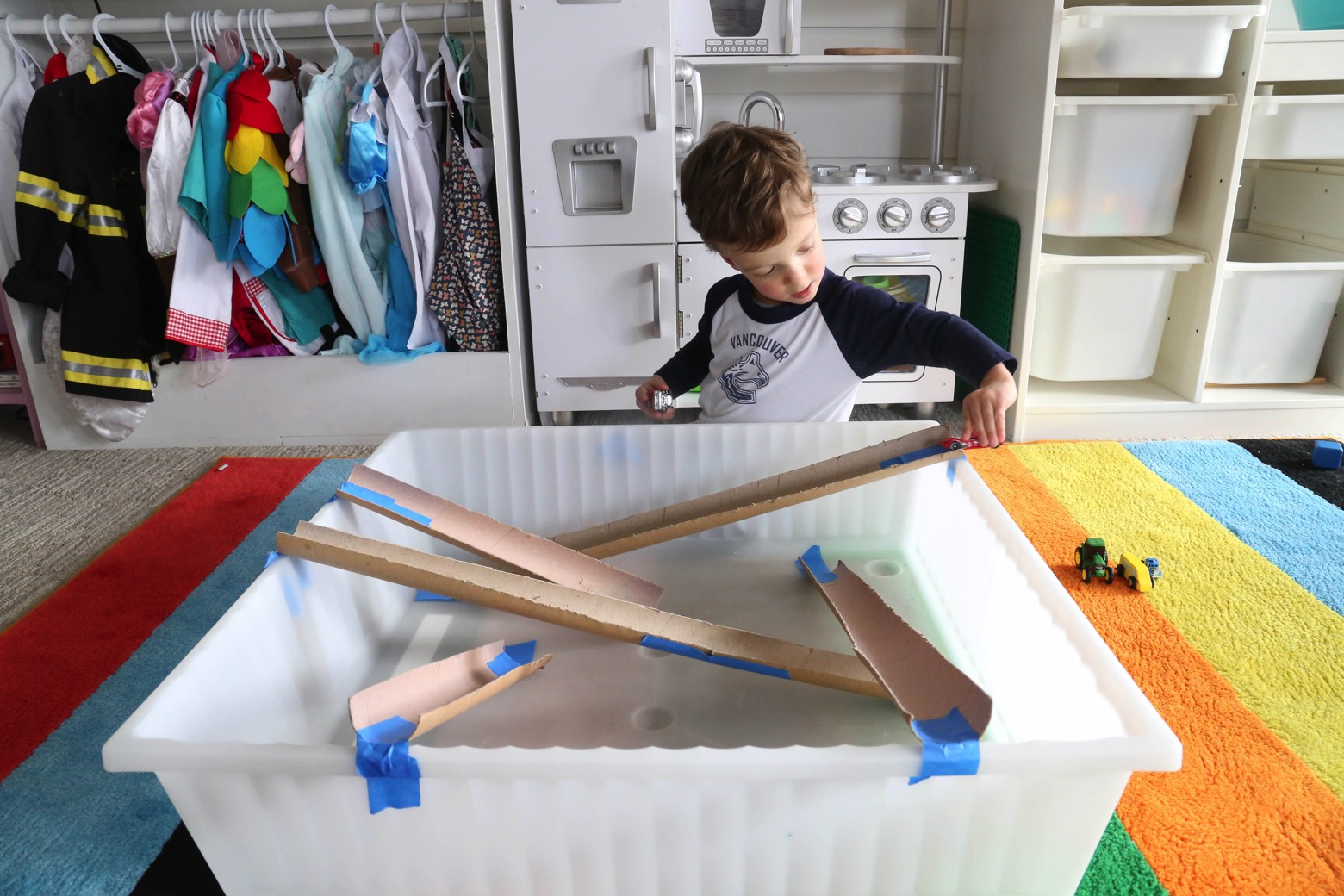 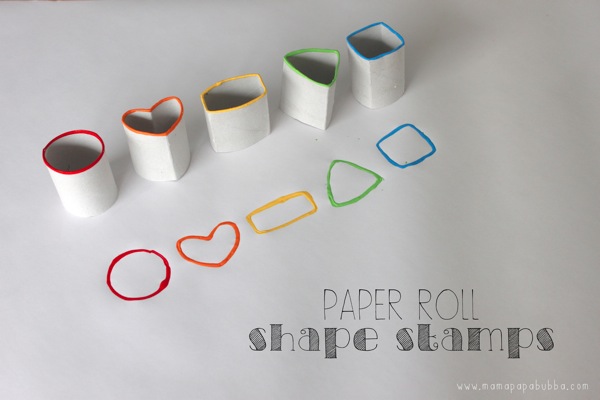 Every once and a while, I seem to go through a paper roll collecting stage.  I have no idea why, because I truly never have anything planned for them, but it happens none the less.  When I noticed a little collection of them today during nap time, I decided we’d put them to use this afternoon. 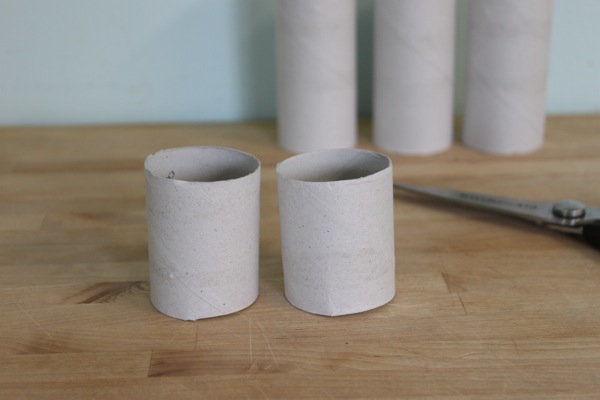 Though we really haven’t done a whole lot of paper tube crafts, I remembered how much Miss G enjoyed the heart stamping activity we did last fall.  Not wanting to do the exact same thing again, I decided to create several different shapes to switch things up a little bit.  To start off, I gently cut the tubes in half. 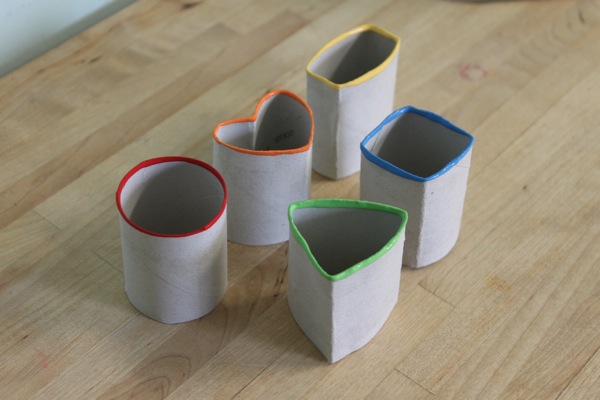 Next, came shaping them.  The good news is that it wasn’t difficult.  For the triangle,  square, and rectangle, I basically made the required number of corners by folding the tubes, then played with the shapes a little bit until I was happy with them.  You can see exactly how to form the heart shape here, and the circle, well, you just leave it as is {obviously}. 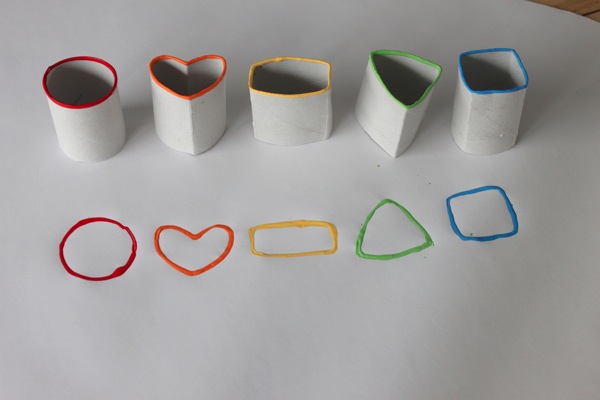 At this point, Gracen was still asleep and I just couldn’t wait test them out.  So I didn’t. ☺ 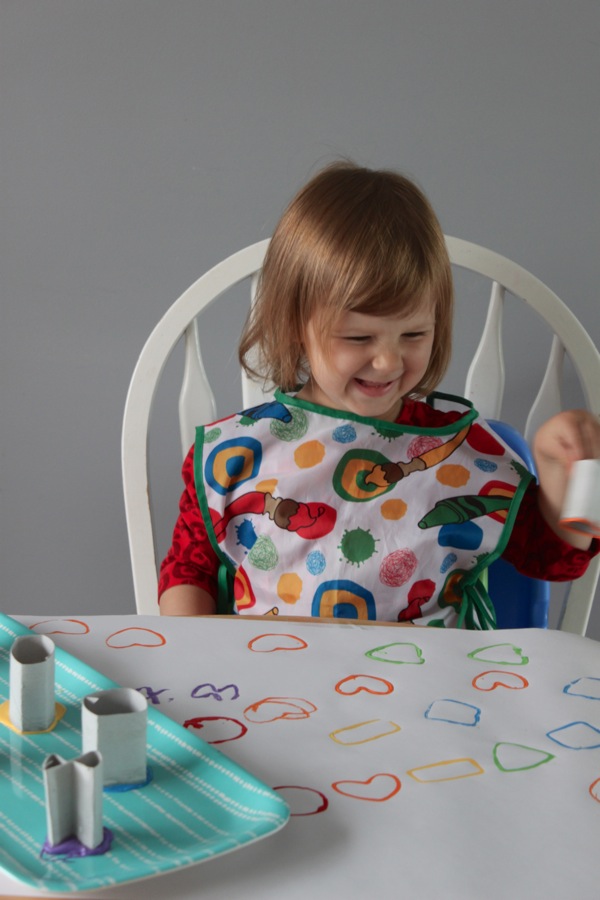 When my little lady woke up, she quickly discovered the stamping station I’d set out for her, and she was thrilled. 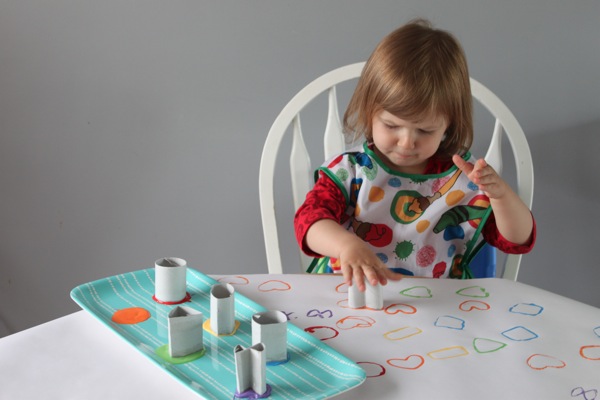 She stamped away testing out each shape thoroughly… 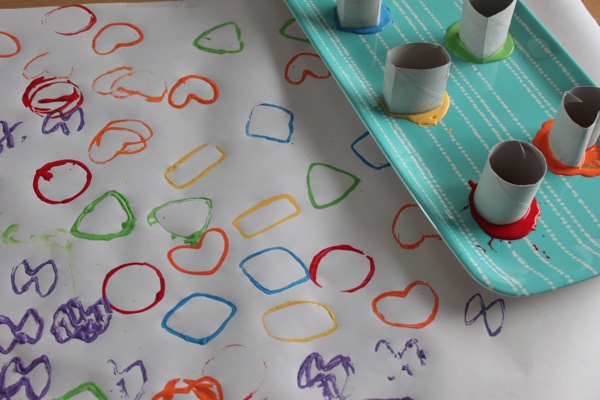 Depending on the paper used for this project, your little one(s) could create a new piece of art for the wall, a piece of wrap for a gift, or a greeting card for someone special.

For one reason or another, I began saving toilet paper rolls a while back. (Don’t ask me why, because I don’t remember. Probably something Pinterest related?) So with a collection of 10 or more paper rolls just sitting around, I decided it was time to do something with them.  I don’t know how I came up with the idea for this project actually…  Maybe I’ve seen it somewhere before? I don’t think so, but it’s certainly a possibility given my tendency to snoop around the internet in the wee hours of the morning.  Either way, I’m probably not the first person in the world to think of using empty toilet paper rolls to create heart-shaped stamps, but since I’ve scoured the web and I can’t find paper roll heart stamps anywhere else on the internet, maybe I’m the first to post about it?

(Disclaimer: While I wouldn’t have my students bring in tp rolls to use for crafts in my classroom, I’m {semi} okay with using rolls from our house in our house.  If you’ve read the same article I read as a beginning teacher about tp rolls being covered in fece particles, you can always opt for paper towel rolls, craft paper rolls, or wrapping paper rolls instead. ☺) 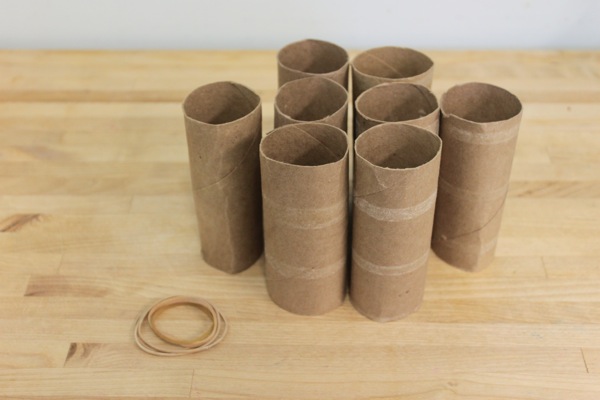 To get started, you’ll need two things: paper tubes and some rubber bands. 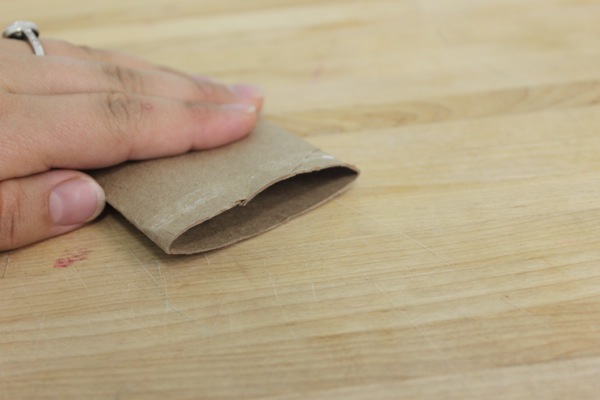 First, flatten your paper tube and press down along the two creases. 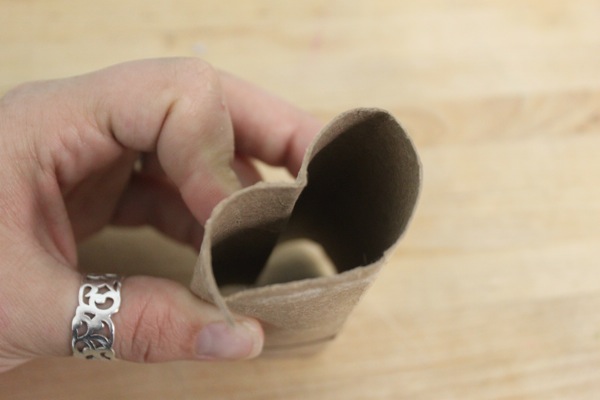 Next, invert one of the creases in order to begin creating a heart shape. 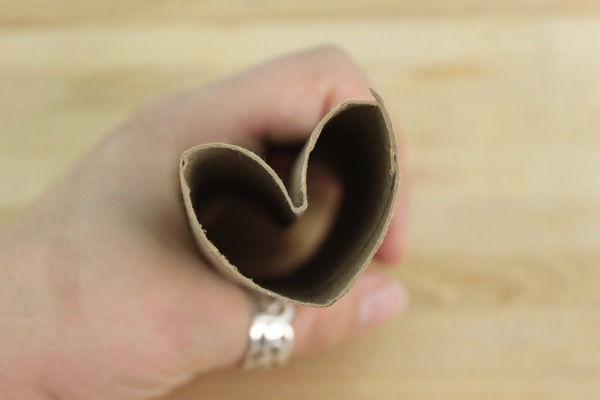 Play with the shape of the heart by squeezing the tube until you’re happy with it. 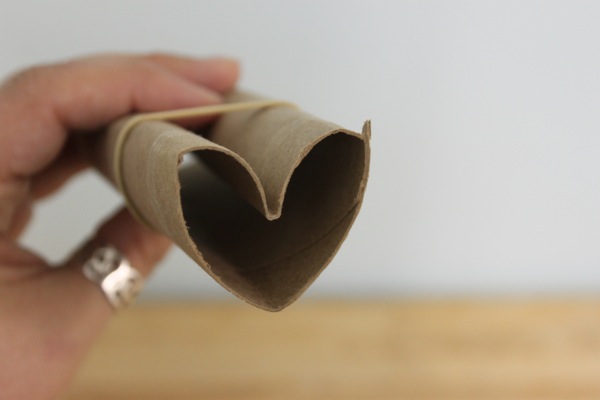 In order to help the heart keep its shape, wrap an elastic band around the tube once or twice. 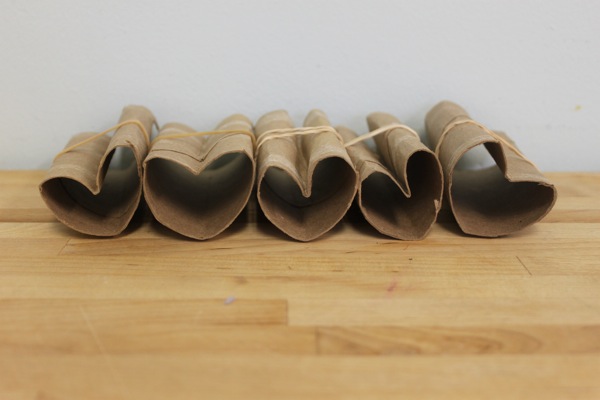 Make one heart stamp for each colour of paint you intend to use. 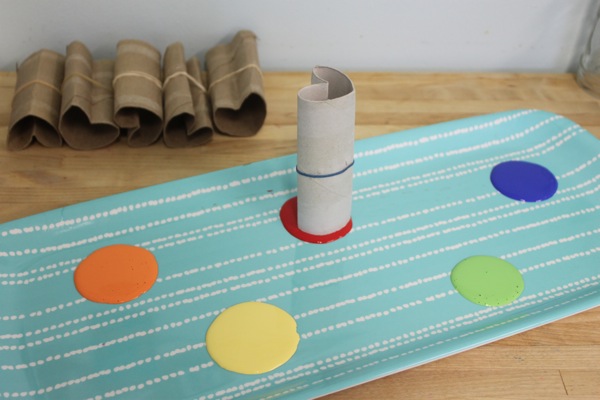 Lastly, pour out a few dollops of paint (we used crafter’s acrylic) and place one stamp in each paint puddle. 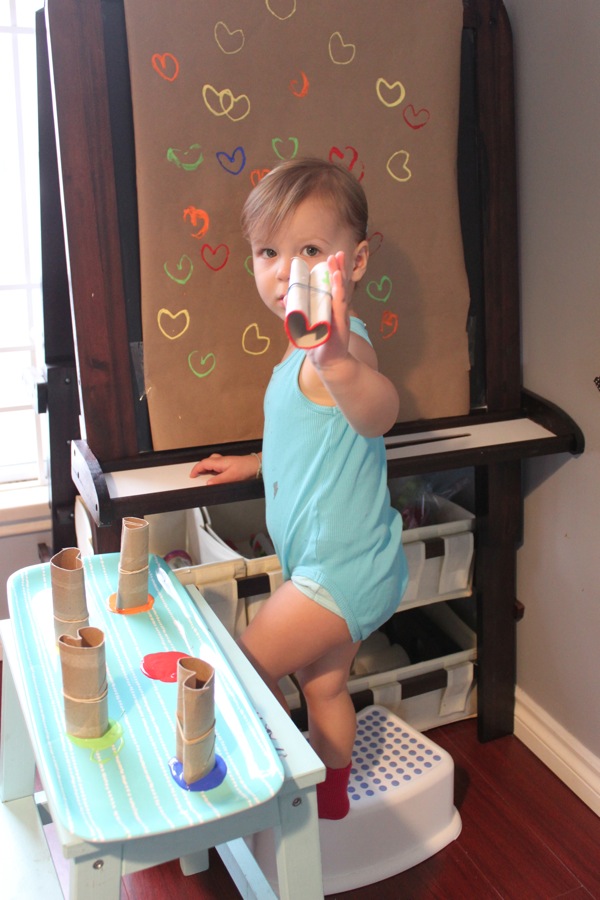 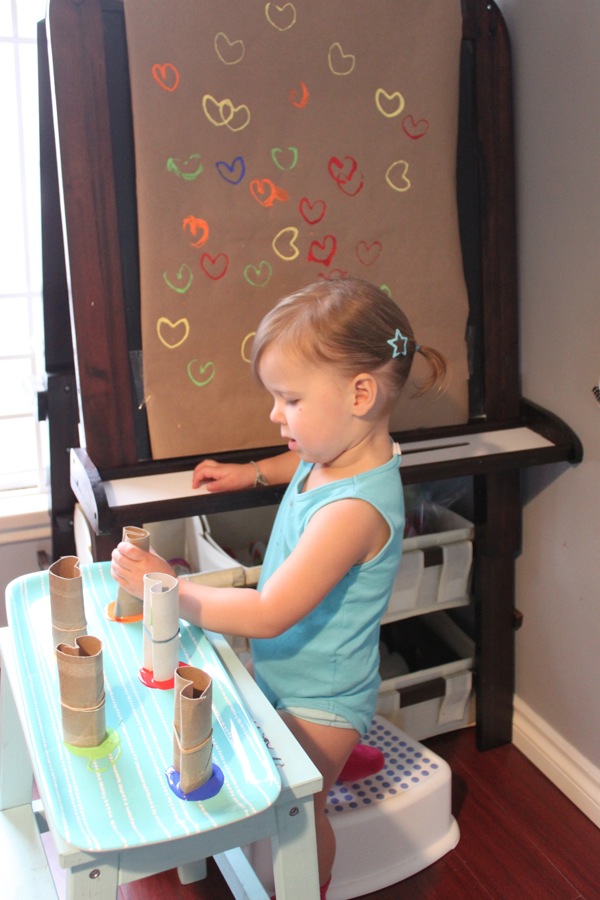 Then set your wee one loose! 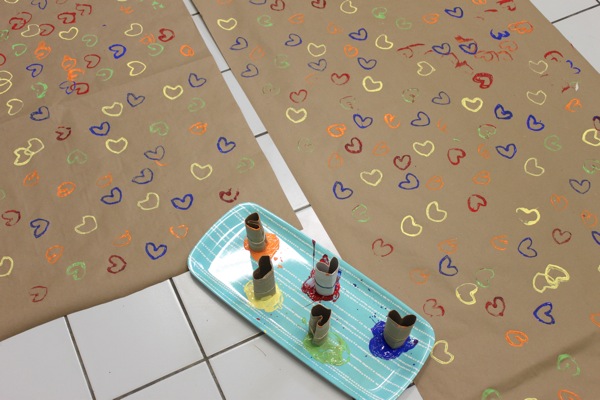 We started on the easel, and ended up on the floor using the stamps to make some homemade wrapping paper, but the stamps would also be perfect for making beautiful homemade cards or some art to hang in your little one’s room.