Well, it’s official…  At 3 years and 3 months, Gracen is completely done with napping.  Truthfully, I’ve dreaded the arrival of this milestone.  I know it sounds dramatic, but I feel like two hours of nap time each afternoon has been key to my being able to be an engaged, {somewhat} organized and on top of things mama during Miss G’s awake hours.  It was my time to tidy up the house, come up with a plan for dinner, make phone calls and return emails, set up an activity for the afternoon, and sneak in a little time for myself.  And when the naps stopped happening, I was a little panicked.  I’m not going to lie…  The transition period has not been easy, but I do feel like we’ve sort of fallen into a routine that is working well for both of us, now several weeks later.

The whole thing started about 6 weeks ago or so… I’d put Grae down as usual, she’d lay there for her normal two hours, and simply not fall asleep.  Soon it became two hours of her calling me to her room repeatedly to make all sorts of requests and tell me she didn’t want to nap.  Afternoons after “nap time” were hard.  She was tired and frantic and needy and without some time to myself, I wasn’t at my best patience-wise.  We’d fumble our way to a very early bedtime, and she’d immediately crash {and I’d want nothing more than to sit on the couch and enjoy some silence, but couldn’t because I had catching up to do from the crazy day that had just come to a close}. Most afternoons, our only saving grace was being outdoors.  After the attempted nap, we’d head downstairs to our courtyard and stay there until dinnertime (I swear that fresh air – and water – have magical powers over tired, cranky, out of sorts kids).  At this point, I really didn’t want to give up on naps all together, because a couple of times a week she’d actually fall asleep when put down, and those afternoons were GLORIOUS.  After a sleep, she’d be happy, easy to reason with, and calm for the rest of the evening.  Dinner wasn’t rushed, and bedtime routines were calm and slow.  Those days were lovely.

Several weeks later, the couple of naps that were happening a week, stopped.  I knew I had to make a change, but I wasn’t sure what the best plan was.  Based on her afternoon demeanour, I honestly felt like Grae still needed a nap, but afternoons were becoming a little less frantic  and cranky, and a little more manageable.  I figured that as long as we both had some time to ourselves to rest and recharge, our afternoons would continue getting easier.

Enter the timer / rest / quiet play time combo – our new afternoon routine that is {*knock on wood*} working really well so far.  After lunch, we get ready for nap time as usual.  Miss G puts on some jammies, picks a couple of books and stuffed animals, and we snuggle and chat about our morning.  I tuck her into her bed, and before leaving, set her timer for one hour.  For that hour, she lays in her darkened room playing with her animals, singing songs, chatting, and reading her books with her glowing night light in hand.  She knows that for that hour, she doesn’t have to sleep, but she does have to lay and rest her body.  Having the timer there seems to have alleviated the problem of her calling me back to her room repeatedly and we both get to enjoy a little downtime to relax and recharge for the afternoon ahead.

Once the timer goes off, she pops up out of bed, turns on her light, and calls me.  I bring her a little drink and snack, set the timer for another hour, and quiet play time begins.  This is one of her favourite times of the day.  She begins hauling out building blocks, dress-up clothes, and toy animals from her drawers and our only rule is that she plays in her room quietly for the full time without coming out.  Most days, it’s no issue at all.  In fact, sometimes the timer goes off and she pops her head out to tell me that she’s not done playing yet and she’d like some more time.  The best part is that the play that happens during this hour is pretty amazing – it’s imaginative, often quite elaborate, and completely independent.  I’ll fully admit that sometimes I eavesdrop to what see what sort of play scene is unfolding behind that closed door.

Today, once the timer had gone, she popped out into the hallway just vibrating with pride and excitement.  “Mama!  I know it’s time to clean up now, but just come and see what I made first!  It’s a coffee shop!  A Duplo one!  And I’m using the little tiny cute cup I got when we got milk the other day.  Come see!  Come see!”  I went into her room and amidst a sea of toys and clothes was this… 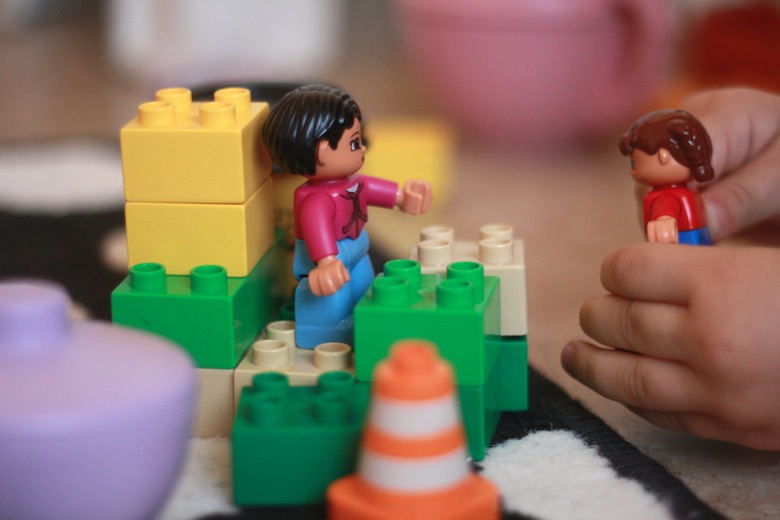 A coffee counter made of Duplo, just as she’d told me, complete with a barista and a customer.

END_OF_DOCUMENT_TOKEN_TO_BE_REPLACED

Unfortunately, we have not quite recovered from when we veered off the path of consistent naps yet…  Gracen is such a routine little thing, that sometimes it’s difficult to get back on track after falling off.  As of now, she goes down for a nap after lunch as usual, she lays in the dark singing and chatting to herself for a good long while, and when she doesn’t fall asleep, I part her curtains just a little to let in some light, and she has some quiet play time alone in her barely-lit room.  Down time we both need.

Besides the fact that she truly does still need her nap and our afternoon is tough without out it, the following morning we are guaranteed to have an extra early wake up (we’re talking somewhere in the 5 a.m. range).  This kid is proof to the fact that good day time sleep equals good nighttime sleep, let me tell you.  Then of course, she’s tired the next morning, nap time is extra tough that day, and the cycle continues.  Viciously.  Ugh.

Oh, and on top of that?  Quiet play time equals this: 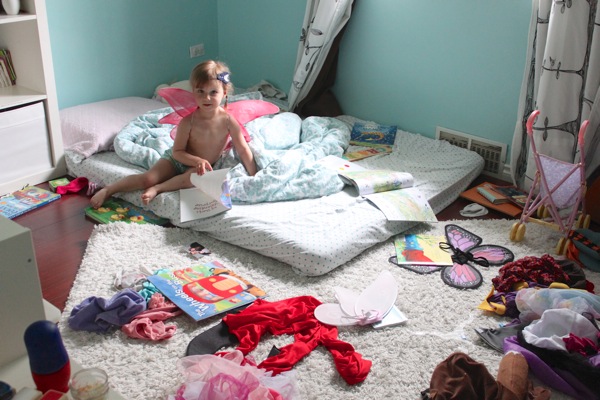 A Grae-nado as we call it.

Here’s hoping for a return of naps, ASAP.