I must admit, we’re pretty strict when it comes to Gracen’s eating habits.  She’s 20 months old now, and we’ve managed to stay clear of all refined sugars, processed foods, and other junk foods thus far (although she did taste her first ever tortilla chip a few days ago while celebrating her Papa’s 30th birthday).  So far, we’ve also avoided all juices too.

But today as we were waiting for last night’s leftover pizza to warm in the oven and I was attempting to chop watermelon with a hungry little munchkin tugging on my pants, I needed a way to get her involved in the lunch preparation for a few minutes.  Off the top of my head, I decided we’d turn the watermelon into a smoothie of sorts, so I sent her into the crisper to retrieve a lemon and we headed outside to pluck a fresh stem of mint from the yard.  What do you get when you combine these 3 simple ingredients?  A citrus mint watermelon cooler (which totally reminds me of something we would have seen on an elaborate “drink” menu during our years in Kuwait). Truthfully, I had no idea how this would turn out, but it was deeeeelish. 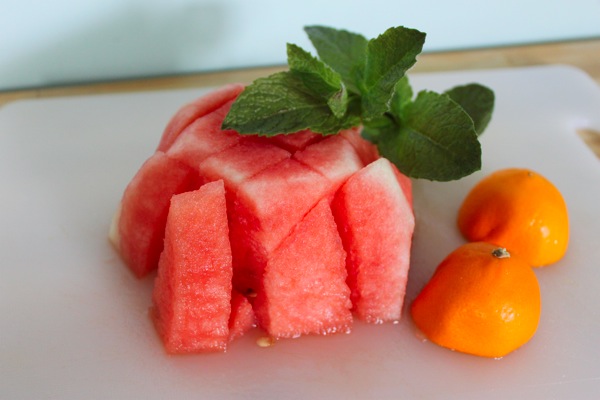 Here are the required ingredients….  Chopped watermelon, fresh mint, and a lemon or two (ours was of the sweet variety, hence the orange colour, but any lemon would do). 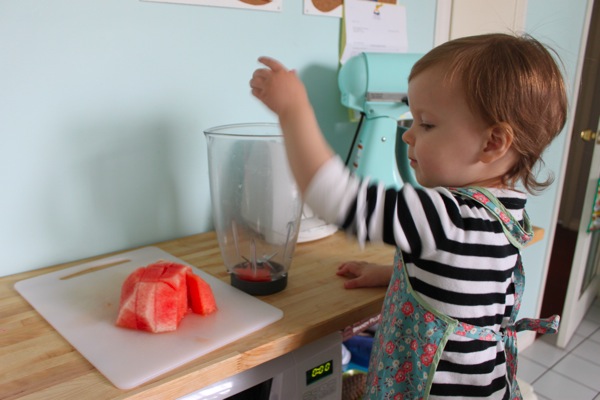 First step – put your watermelon in a blender. 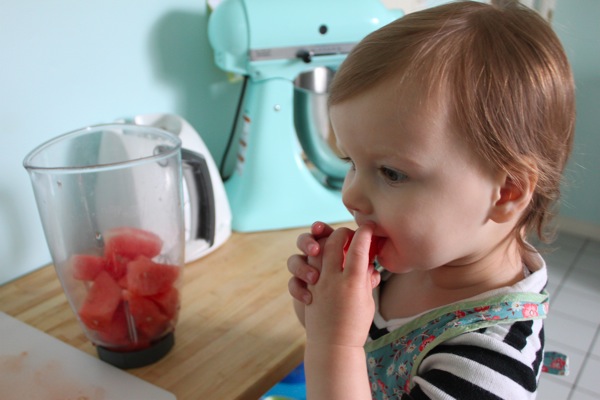 Be sure to save the last chunk for eating purposes. ☺ 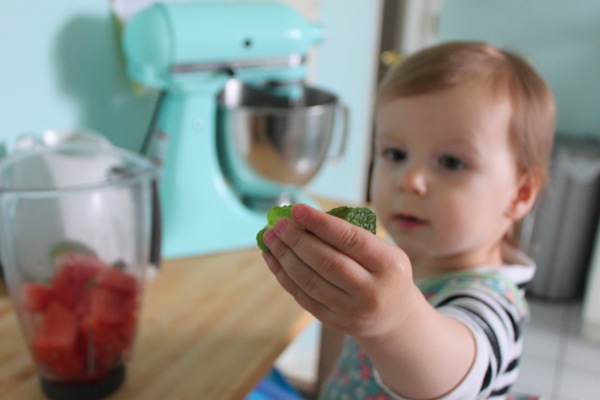 Pluck the mint leaves off of the stem. 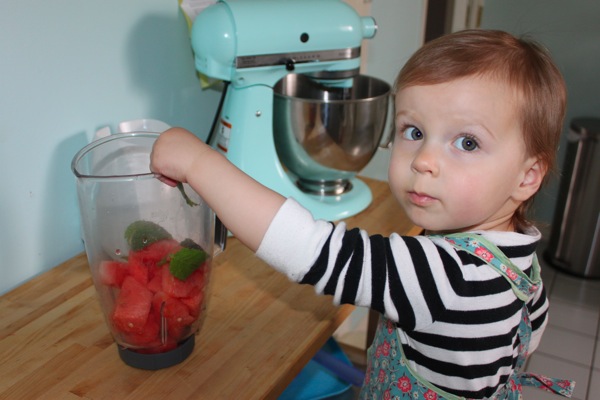 And put them in the blender. 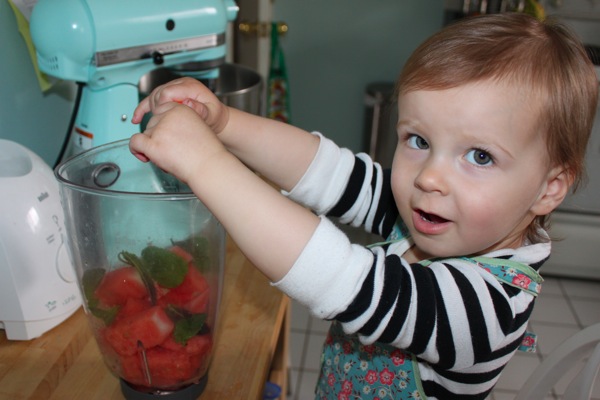 Next, squeeze the juice out of your lemons and into the blender. 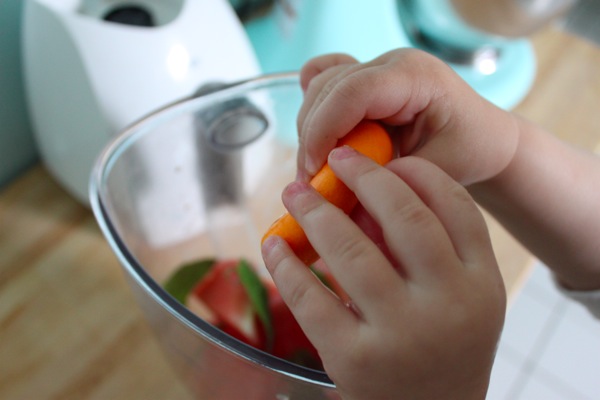 Be sure to remove the seeds first or catch them while squeezing! 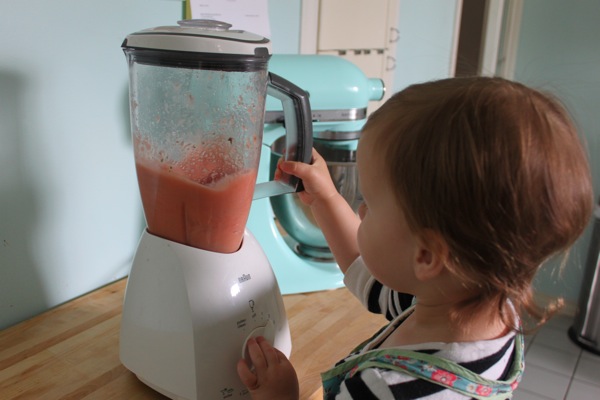 Then, blend!  At first, it may seem as though there is not enough liquid to allow the mixture to blend properly.  Start by ‘pulsing’ and then removing the blender from its base to give it a good shake.  After doing this a few times, you’ll have plenty of liquid to blend the entire mixture.  For a smoother texture, blend for a couple of minutes, and for a chunkier texture, blend less. 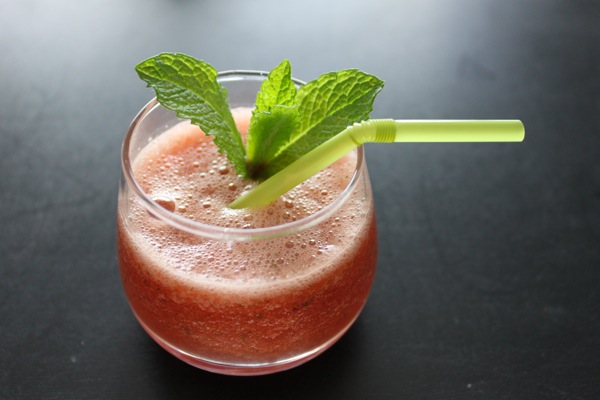 Pour a munchkin-sized glass for your wee one… 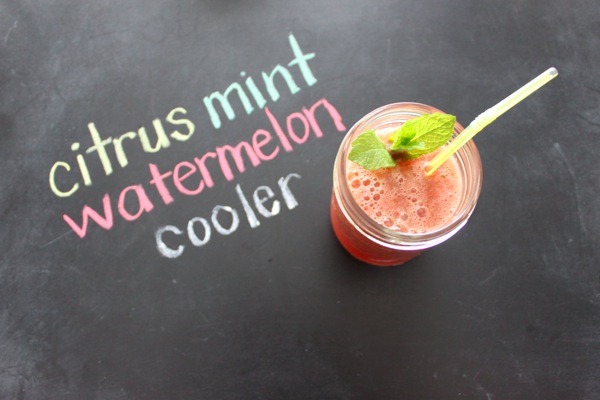 And a mason jar full for yourself!

If I’m being honest, Grae took a sip or two in the very beginning and let out an enthusiastic ‘Mmmmmm!’, but then promptly asked for water and left her glass of watermelon juice just sitting there for the duration of lunch.  It truly was really yummy and she loves all of the ingredients separately, so I’ve come upon the decision that she’s just not a juice girl.  She had the same reaction back in January when she was sick and we offered her the juice from a freshly squeezed orange.  Oh well. I’m perfectly happy having a kid who would prefer water over juice anyways.

*Play with the ratios to get it tasting exactly as you like.

Place everything in blender. Pulse and shake a few times in order to build up a little liquid.  Blend the entire mixture until your desired consistency is reached. Serve with ice and a fresh mint sprig.