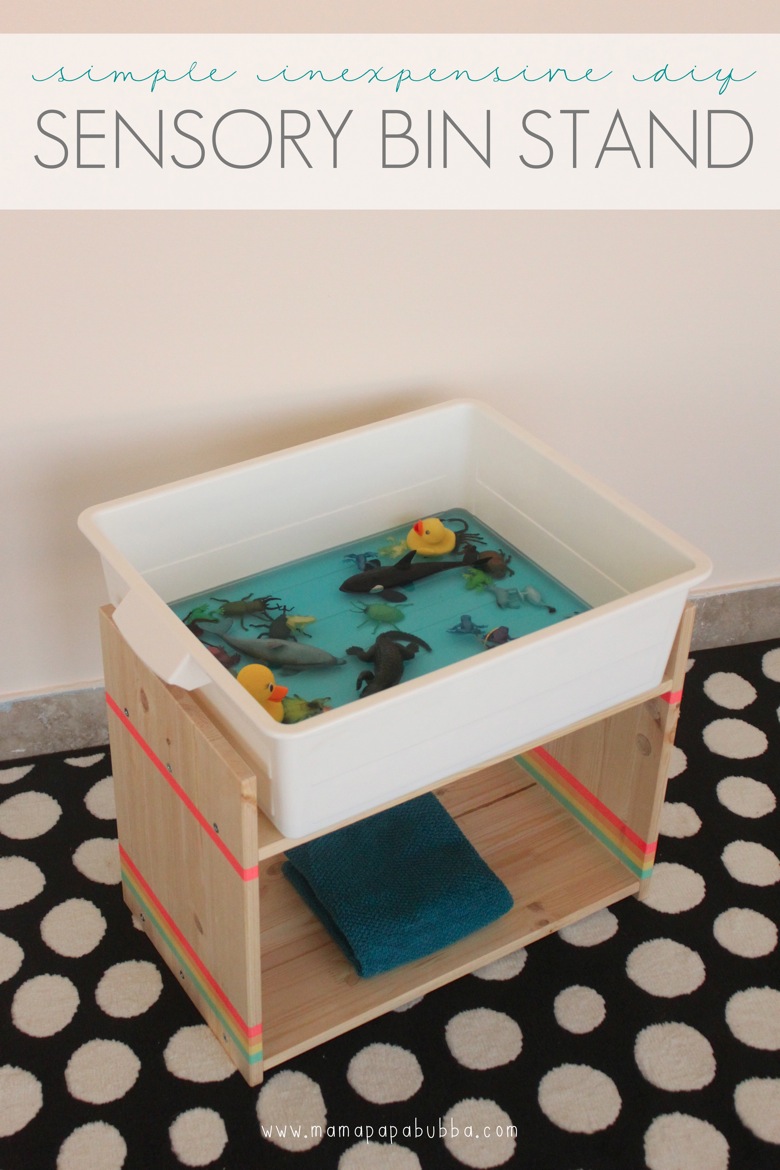 Today Gracen and I put together this very simple sensory bin stand for her brand new {big} bedroom.  It was an idea I’d seen on Ikea Hackers a few years back, and I’m so glad I remembered it.  It’s simple, inexpensive, multipurpose, and fully customizable, which I love.  And now that we’ve put it to the test, I think we may even get another one to add to our collection.

If you haven’t already guessed, Ikea hasn’t suddenly gone into the sensory bin business.  When flipped over the proper way, our little stand is actually intended to be the simplest of night tables (find it in Canada / the US / Kuwait).  It’s so simple in fact, that it didn’t even come with an instruction booklet (even Grae’s nightlight came with one) – just 4 pieces of unfinished wood and 12 very large screws.

With my little helper by my side, I quickly put together the night stand, and then flipped it upside down.  This way, the ‘legs’ become posts that help hold the bin in place.  Now looking back at the original post, I see that the creator actually left the nightstand’s top out so that it has more of a table look to it, but I’m happy we built ours as with it.  Not only does it create a little shelf of sorts where small bins of sensory materials, towels, and extra items can be stored, but I also feel like it gives the stand more stability.

While we’ll probably eventually stain or paint our stand a fun colour (too much to do at the moment), for now, we decided just to spice it up a little with some washi tape – an inexpensive, non-permanent way of decorating.

We decided to go with some simple stripes in some of the colours featured in the beautiful quilt Gracen’s auntie made her, and just did it freehand.  To make it perfect, I probably should have measured, but I just made my bottom stripe as straight as I could, then used its upper edge as a guide for the next stripe.

Miss G liked this part because it meant that all of the extra bits of washi were for her to use.  She found a big piece of cardboard box, then ran between it and the washi tape collection housed on my knee in order to create her art piece.

While I don’t know that I’m crazy about our final design, it works and Miss G likes it a lot, and that’s all that matters at the moment.

I wasn’t sure what sort of bin we’d find to fit on top, but I ended up picking out this plastic Antonius drawer {along with a lid}, and it pretty much fits perfectly (you really just need something that’s as close to 48 centimetres long as possible without going over).  It is a little wider than the stand, but because it’s so wide and shallow, I don’t think that’ll be a problem.

We just sat our bin on top, but as soon as I come across it while unpacking boxes, I think I’ll add a length of no-slip grip (the stuff you can line drawers and shelves with), just give it some extra stick.  Because Gracen’s a fairly calm kid, I’m not too worried about the bin being pushed right off of the shelf, but if you are, adhering a wide stripe of strong velcro onto the top of the stand and the base of the bin may be a good option as it would secure the bin and still allow it to be removed for easy cleaning and filling.

To test ours out for the first time, I added a small amount of water and a few drops of food colouring to the bin, and Gracen began filling it up with plastic creatures ‘that needed a bath’.

I’m pretty happy with the end result as it allows us to make our sensory bins more of a permanent fixture in Gracen’s play area without there being stuff all over the floor.  At almost 100 centimetres tall, the stand could be a tiny bit higher to fit Gracen perfectly, but she still stands comfortably beside it, and I think that small issue will be solved when the bin is filled with a little more than 3 centimetres of water. ☺

I also really like being able to put the lid on top of the bin when it’s not in use so that dust and other things stay out.

Now to put our new sensory station to good use… There are so many possibilities, I don’t know what we’ll pick next!