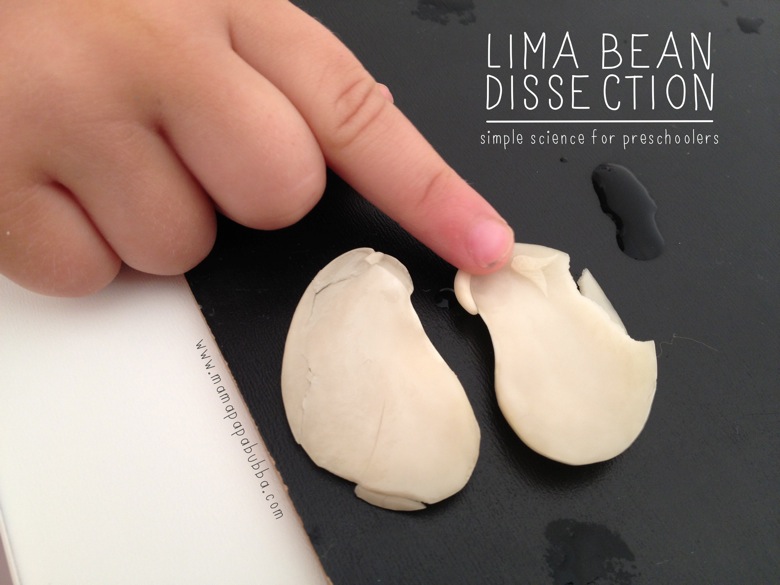 Yesterday, as we were using some big lima beans for a project (more on that later!), Gracen began trying to open one.  She was super determined and managed to flake off little bits of the bean’s outer layer, but she didn’t get much further than that.  When she asked me how we could open the bean, I remembered one of my favourite science projects I did each year with my first graders here in Kuwait… A bean seed dissection. Though normally the munchkins I do it with are 6 years old, I try my very best to follow Gracen’s lead and interests when it comes to activities, and I knew she’d just love dissecting some seeds. 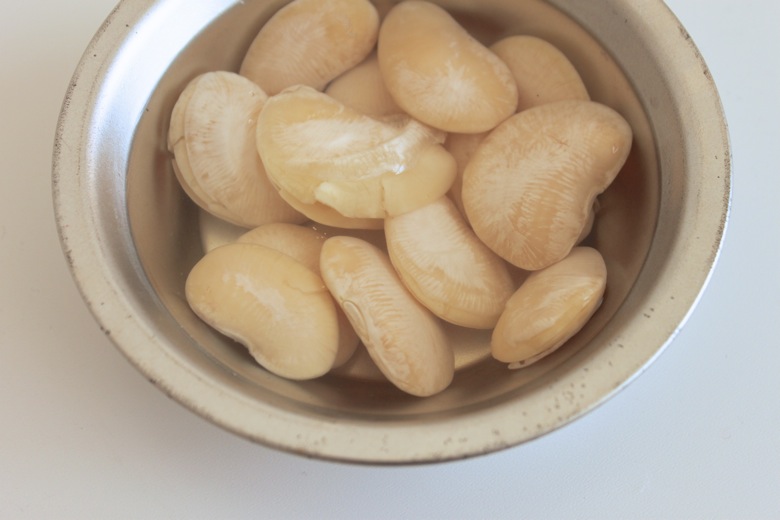 I told her about my ‘secret’ trick for opening seeds (soaking them in water overnight first) and she ran to get a dish and filled it with her very favourite beans.  We covered the beans completely with room temperature water, and when we checked in on them this morning, they looked like this – plump, soft, and in some cases, beginning to open. 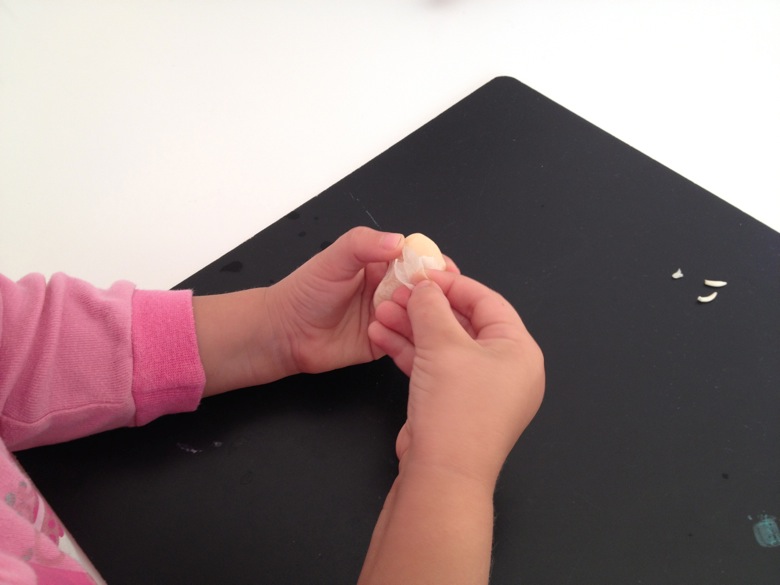 Grae was excited.  Each with a bean in hand, I began opening mine by running my fingernail vertically along the curved outside edge of the seed.  Grae watched intently and then began to do the same with hers, peeling the thin paper-like coating off of the seed when ready.

When she’d removed it completely, I told her that the thin outside covering was actually called a seed coat, which she found quite hysterical.  I asked if she had any guesses as to what its job was and her response was, ‘To protect it like a jacket?’  Smart little cookie! 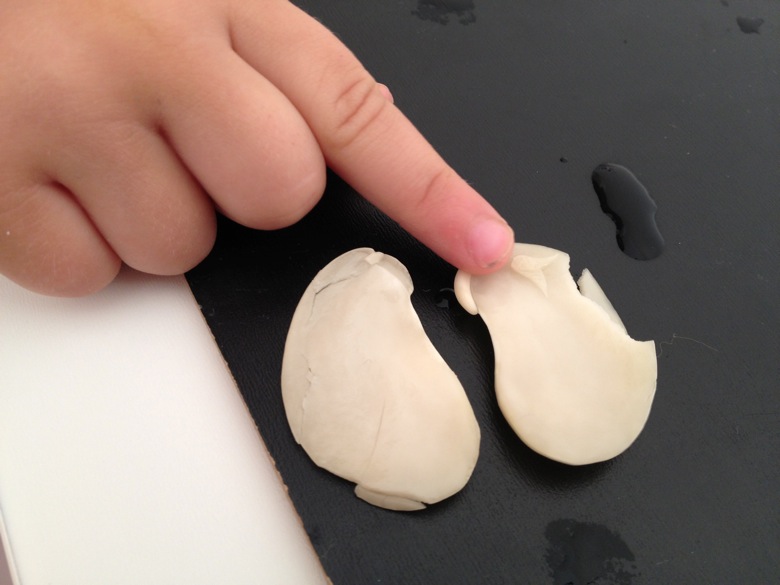 With the seed coat removed, we took a closer look at the inside parts.  I asked her if she could see the ‘baby plant’ (also known as the embryo) and after surveying the bean carefully, pointed to the little worm-like structure topped with miniature-looking leaves – yup!  I asked if she knew what the rest of the bean was, but she wasn’t sure, so I explained that it was the ‘food’ (also known as the cotyledon) that helped the baby plant start growing eventually. 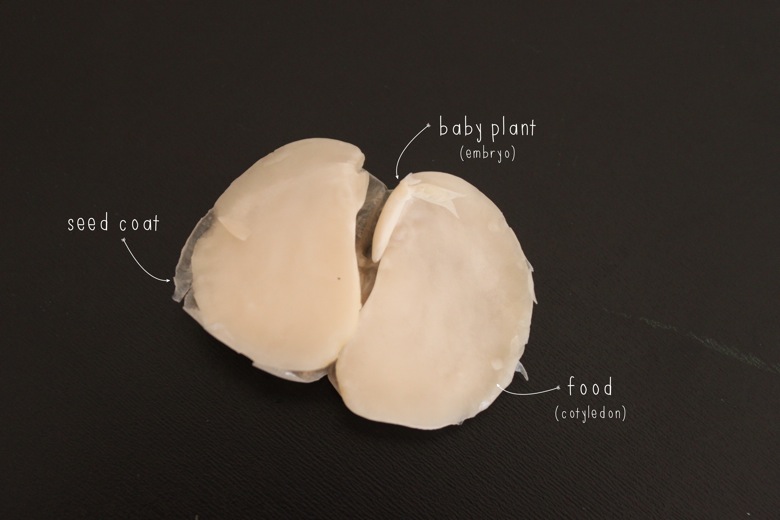 Here’s a closer look at all of the parts.  While we normally stick to the real names for things, in this case, I did mention the terms ’embryo’ and ‘cotyledon’, but mostly used ‘baby plant’ and ‘food’ as they allowed her to put her background knowledge of both terms to use. 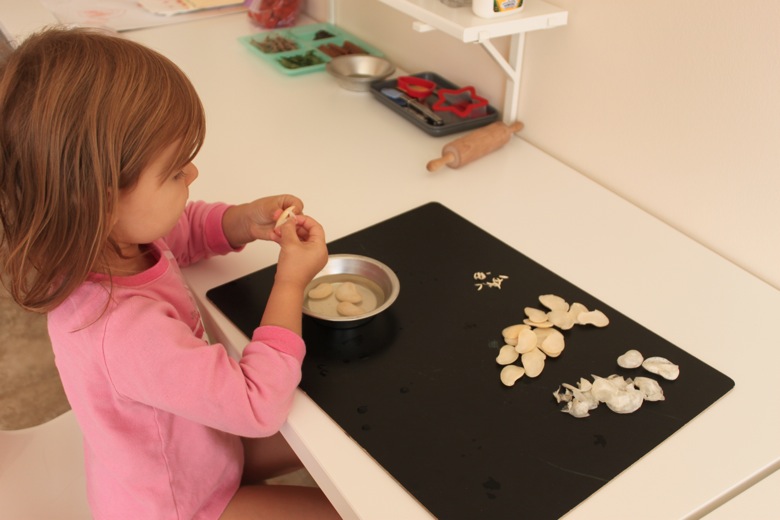 Miss G was so into this that she dissected every single one of our beans, talking about the parts and sorting them along the way.  The very best part is when she looked up at me and said, ‘Mama, today I’m just a lil’ scientist, but one day I’ll be a big ACTUALLY scientist’.  Oh my heavens, why don’t you make my heart burst a little more, okay Lulu? 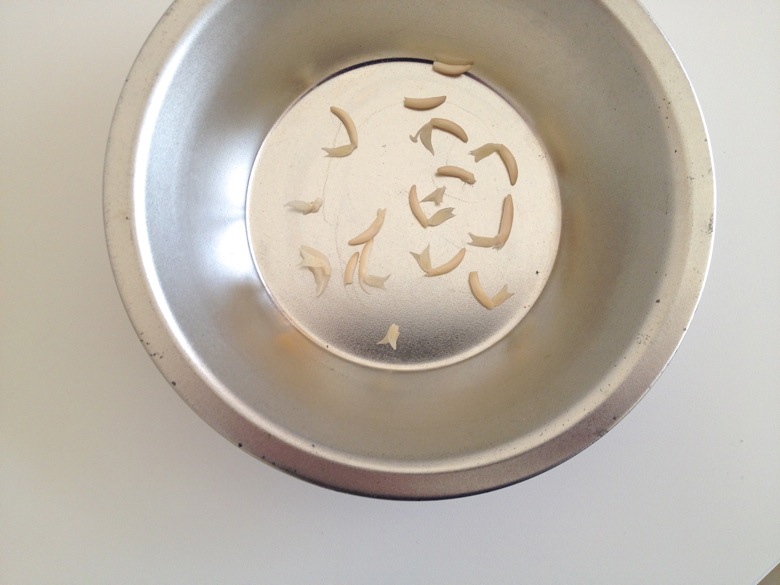 When she was done dissecting, all of the parts got a bath in some fresh water (Grae’s initiative), and these little baby plants got saved because, ‘Mama, they’re BABIES!!!’  Right.  Of course.

To see some of our other favourite science explorations, click here.

2 thoughts on “Our Budding Scientist & a Lima Bean Dissection”