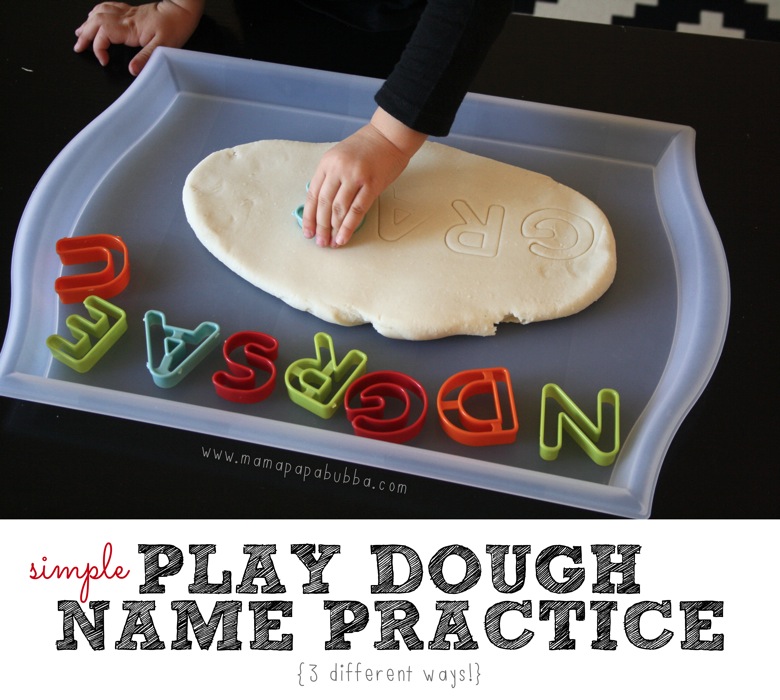 Even though Gracen has known how to spell her name for a long while now, we still enjoying doing fun name activities every now and then.  I set up today’s activity while Miss G was resting, and kept it very simple.  3 trays, each with some play dough and some letter ‘manipulatives’ I collected from around the house.  When Grae woke up, she spotted the play dough name practice trays waiting for her immediately and was eager to check them out. 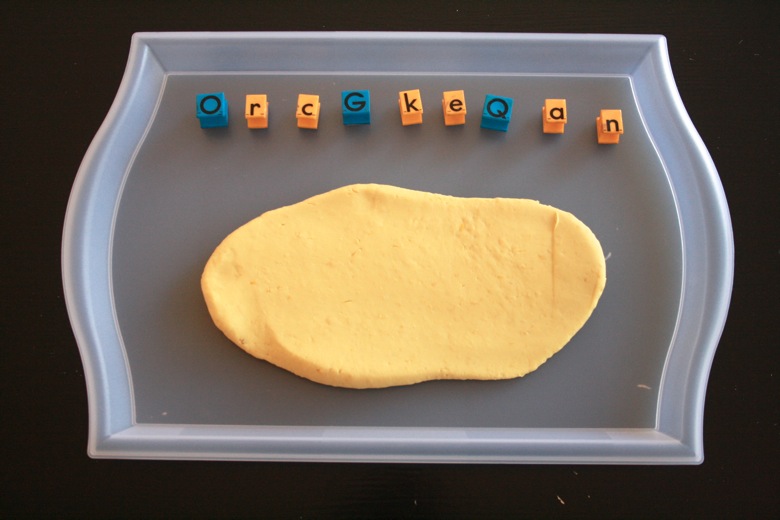 Out of the three choices, she chose to explore this one first – our lemony play dough paired with these awesome uppercase and lowercase letter stamps I purchased while teaching kindergarten.  With the fun name activities we’ve done in the past, I’ve usually just included the specific letters in the word ‘Gracen’, but now that she’s an expert, I decided to include extras to add some interest and make the activity a bit more challenging.  I also personally prefer that children learn to identify and write their names in lowercase letters with an uppercase beginning letter from the start, so I always set out our materials with that preference in mind if possible. 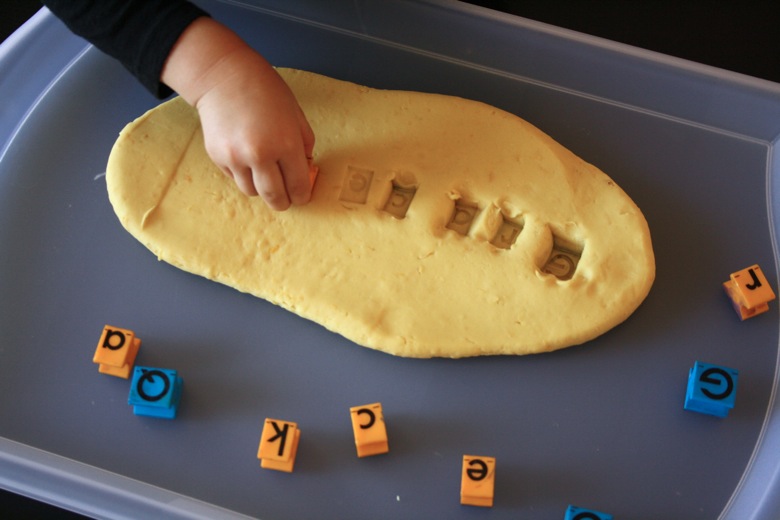 Though I tried to be tricky, Miss G immediately grabbed the ‘G’ and started stamping on the far lefthand side.  Though you really don’t have to push the stamps in as far as she did, Grae thought sinking them down deep into the play dough so that they became semi-stuck was really funny. 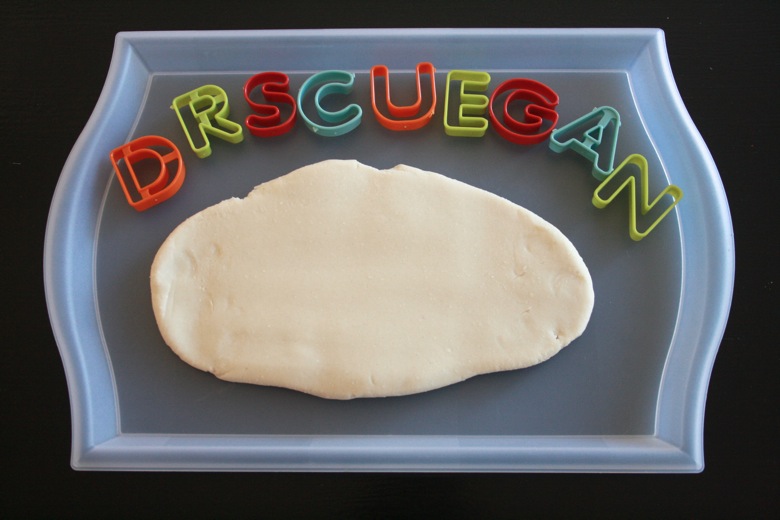 This tray was the one Grae chose to work with next – our delicious-smelling vanilla mint play dough and our alphabet cookie cutters.  Now unfortunately, I’ve yet to come across  a lowercase set, so we made do with all uppercase letters this time around. 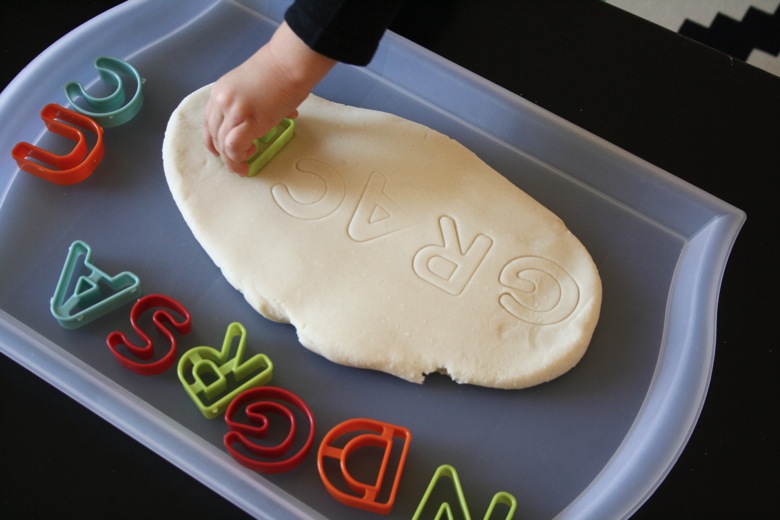 Instead of actually cutting the shapes out, Grae used the cookie cutters as you would stamps, which I thought was sort of fun. 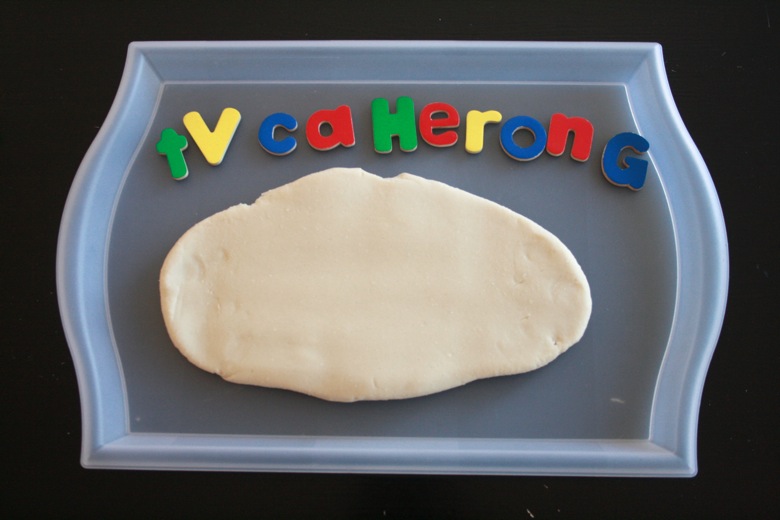 Our final tray looked like this – another big piece of our vanilla mint play dough rolled out, with several upper- and lowercase Melissa & Doug wooden alphabet magnets. 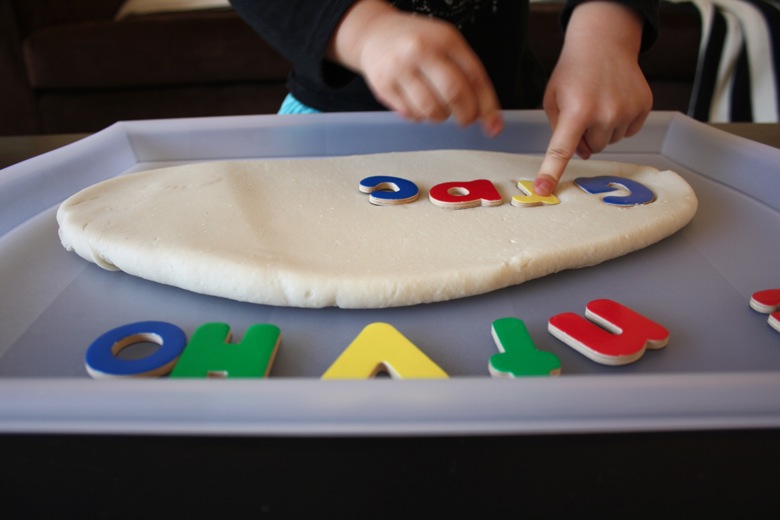 As she was spelling out her name, Grae enjoyed sinking the magnets into the play dough to make them flush with the surface.  {As you can see, this time around she’s got her ‘a’ backwards…  Though it’s a rare occurrence, reversing letters at this age is still very much developmentally appropriate, so after asking her how she thought her ‘a’ looked and receiving ‘nice!’ as a response, I left it be.} 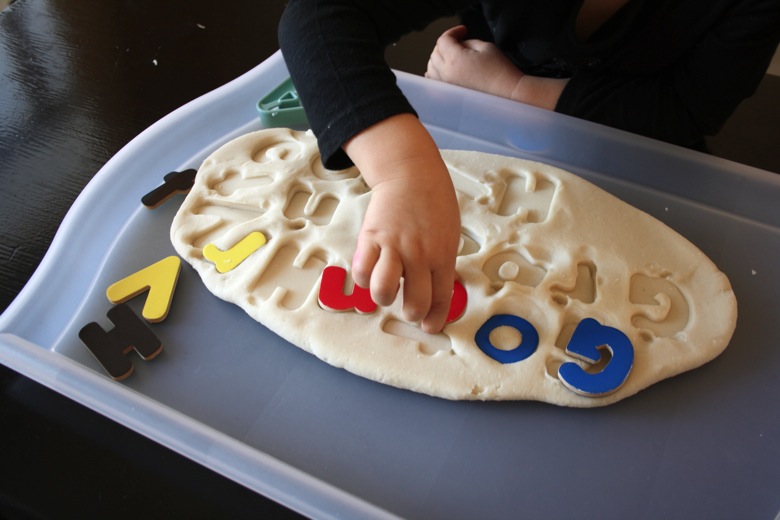 Then, after finishing her name and realizing that the magnets left very clear impressions when lifted, this happened.  ☺

And if you’re on the hunt, be sure to check out our fun name activities too!