Grae and I are very lucky to be part of a fabulous little play school co-op here in Kuwait.  The whole thing is very low key.  We meet at someone’s house every Sunday morning to partake in a few fun activities that go with our weekly theme, and then we meet on again on Thursday mornings for a less structured outdoor outing or ‘field trip’ of some sort.  Since this week’s theme was apples, I helped to set up an apple pie making station for our little ones {ages 1 to 4} to enjoy. 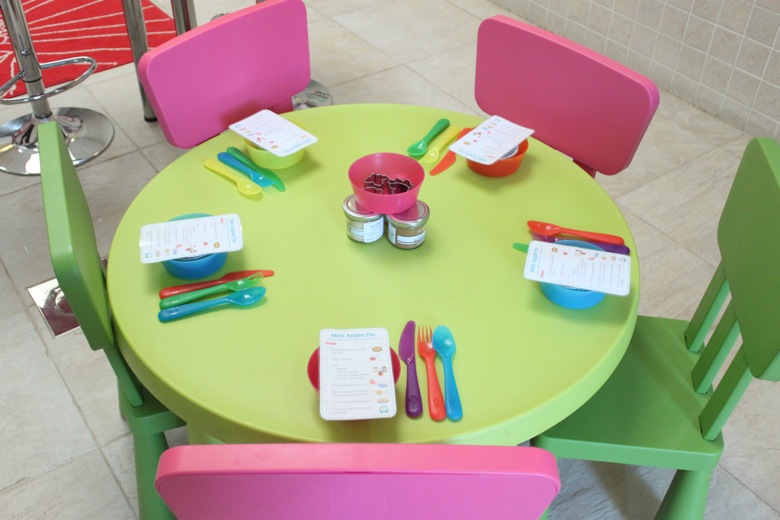 I tried to make it as age-appropriate as possible, prepping the dough in advance and creating simple recipe cards {with pictures} to allow the parents and munchkins to move through the process at their own pace.  Overall, I think it went over really well.  The kids really seemed to enjoy the patting and scooping and mixing, and it was nice to branch out and do something other than a craft {not that crafts are a bad thing, of course}. 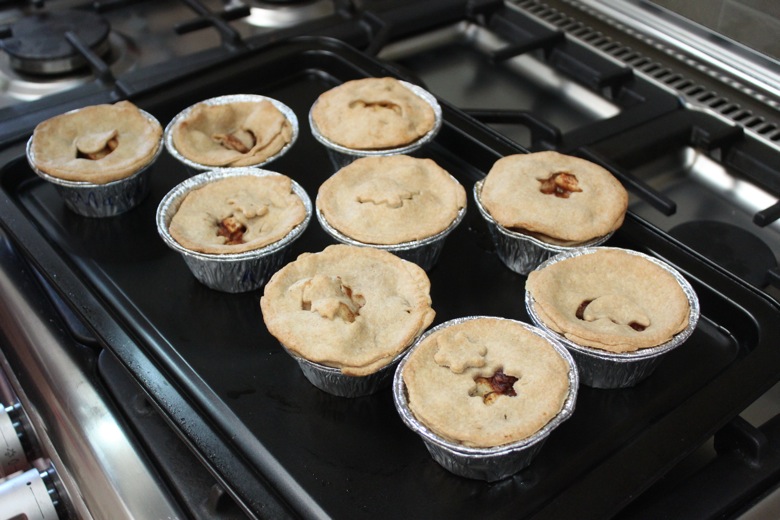 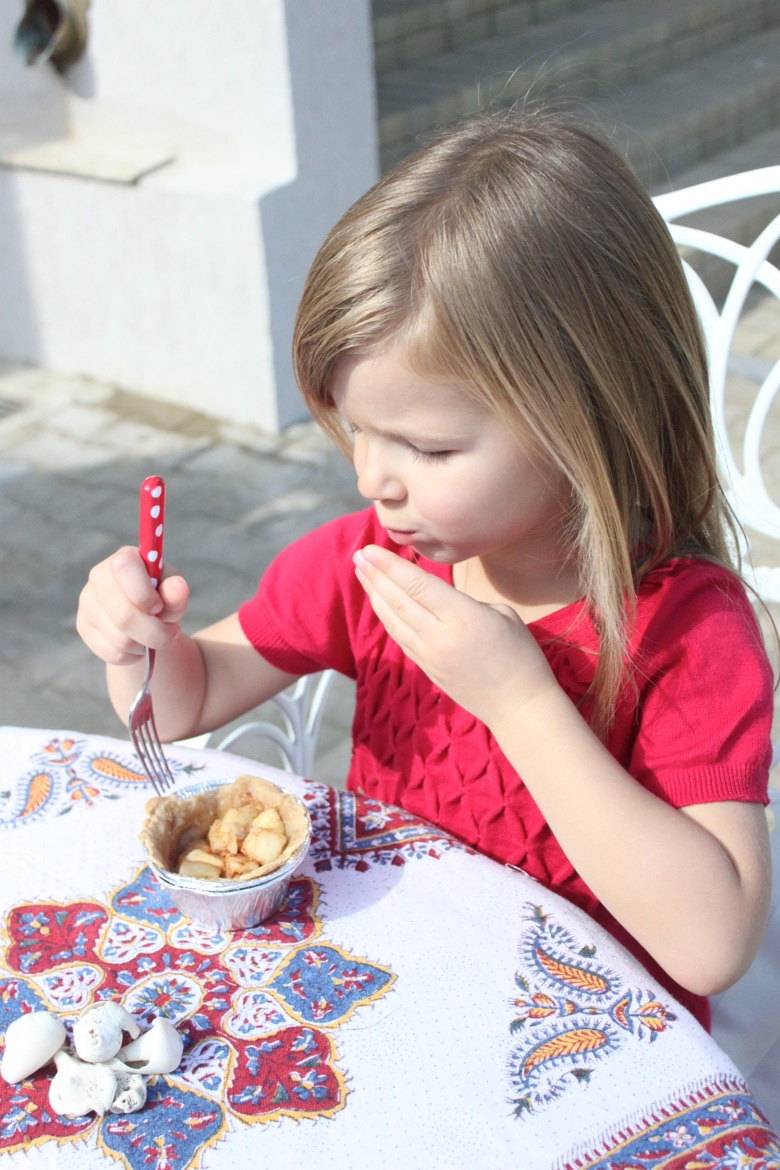 The pies turned out really well too!  The entire house smelled amazing while they cooked, and based on the fact that Gracen’s was gone in 5 minutes after they’d come out of the oven, I’d say they tasted just as good. 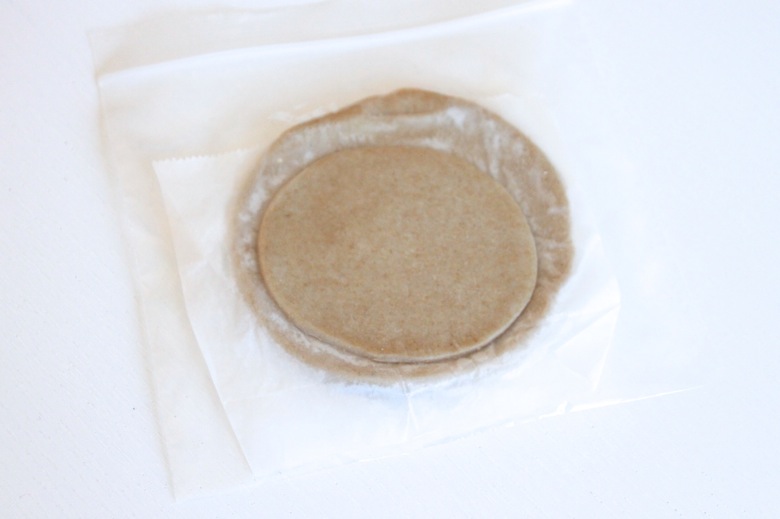 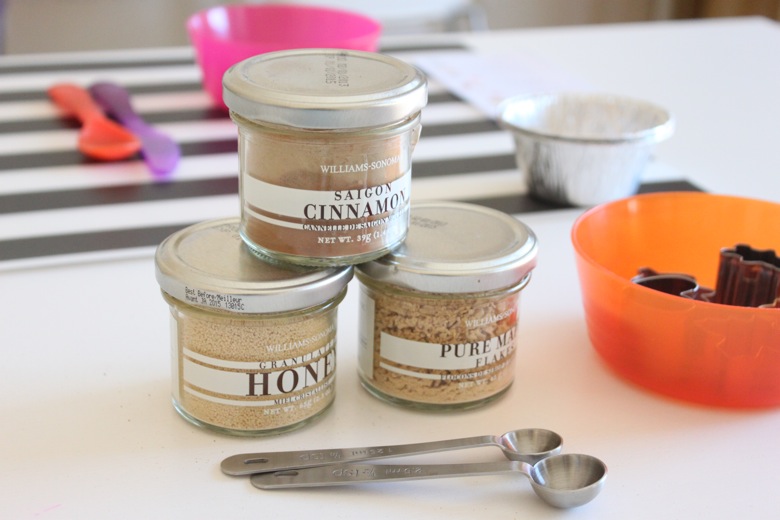 Well, this afternoon, with a few pies worth of wholewheat pastry dough left, we decided to sit down as a family and make mini apple pies once again.  Only this time was even more fun, because Gracen was in charge of teaching her Papa how to make a pie too!

We started by taking out the same ingredients we used yesterday…  Our wholewheat pastry dough {made using this recipe and a whole lot of pulsing in the food processor}, several peeled apple slices also leftover from yesterday’s fun, plus some cinnamon, granulated honey {purchased at Williams-Sonoma – similar here} and some pure maple flakes {also purchased at Williams-Sonoma – similar here} – YUM. 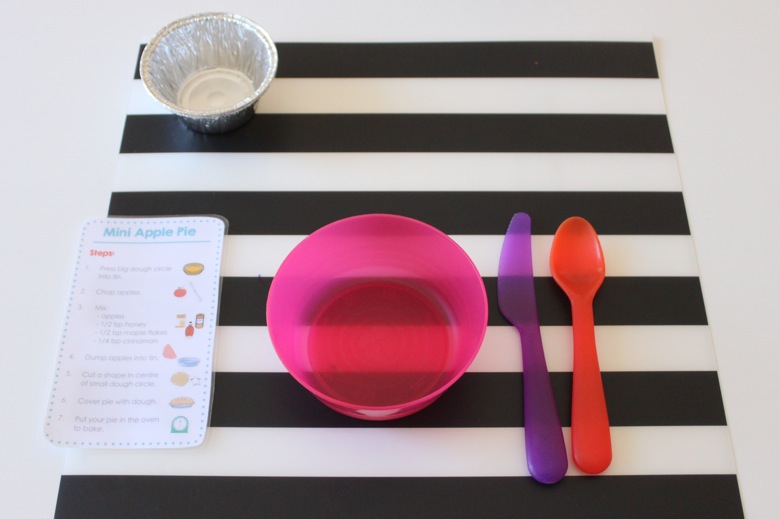 We also set out one of yesterday’s laminated recipe cards, plus a small bowl, spoon, knife, and tin baking cup for each person. 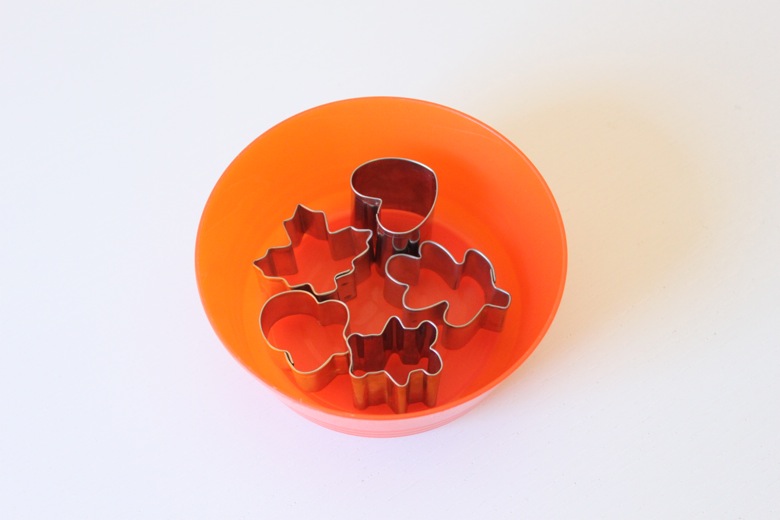 Then we gathered a few of our favourite mini cookie cutters, and we were good to go. 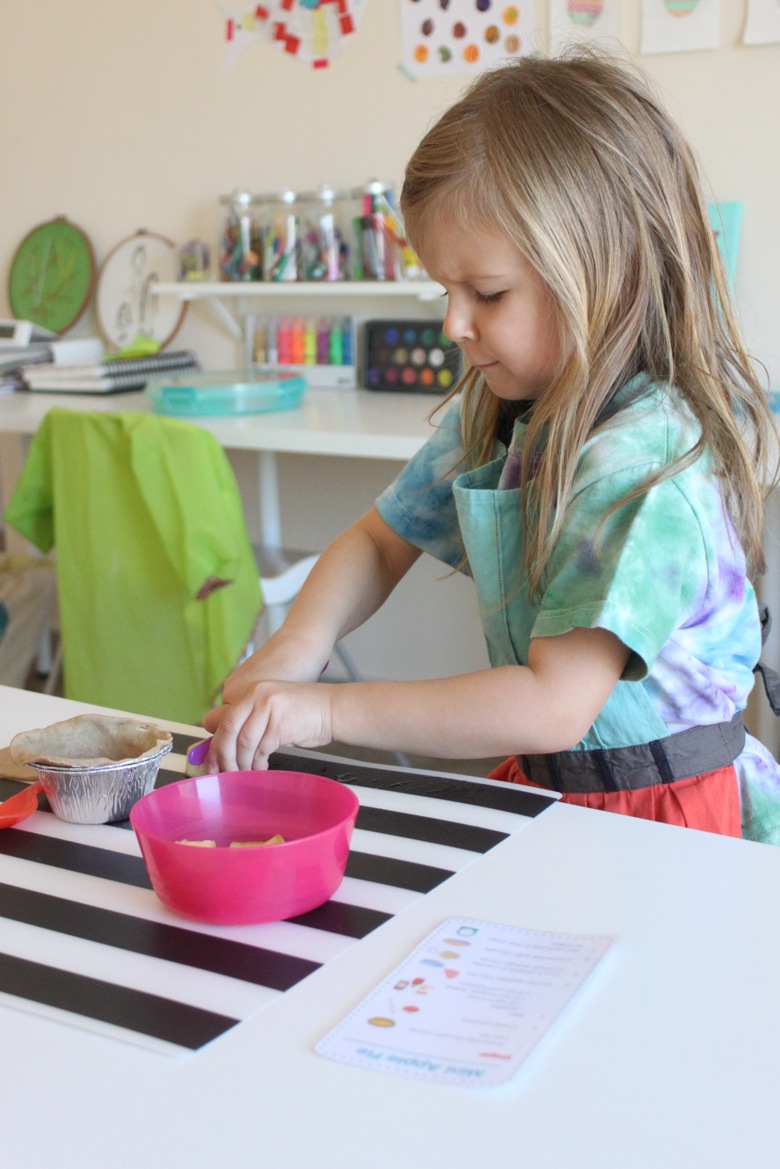 After taking our large circles of wholewheat pastry dough and pressing them into our tin cups, we each took 4 or 5 pre-cut apple slices and chopped them into chunks… 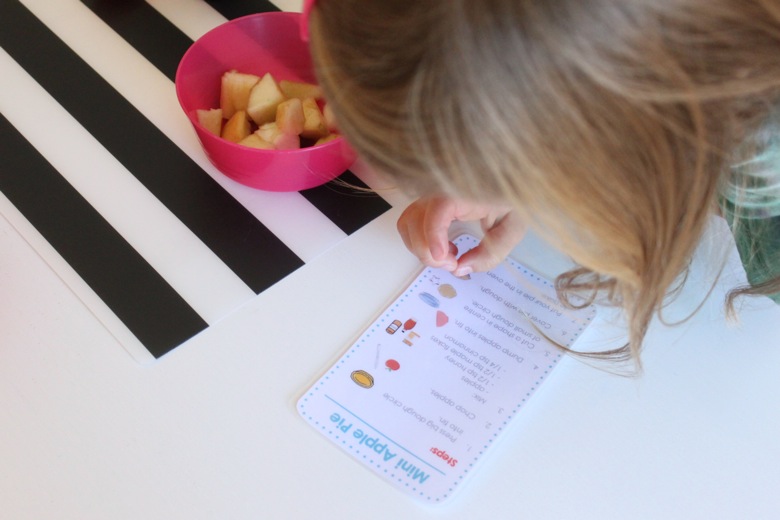 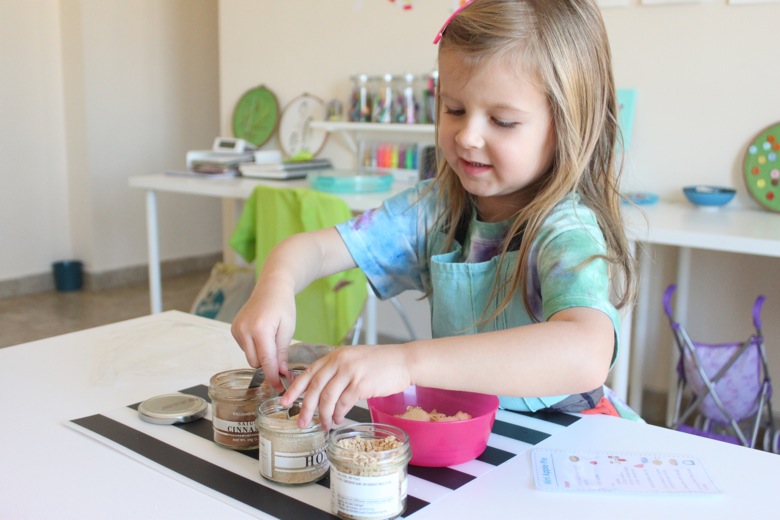 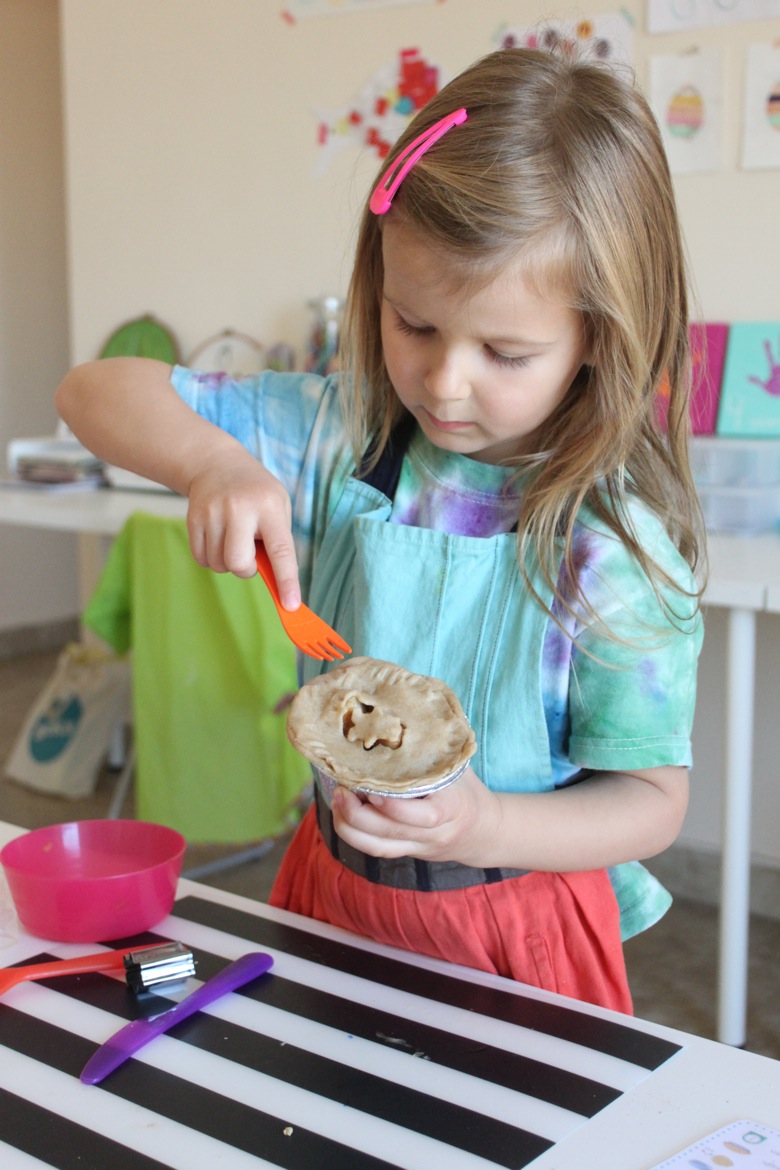 Next up, we took our smaller circle of dough, cut the shape of our choice out of the centre, and carefully covered the tops of our pies, making sure to seal the edges. 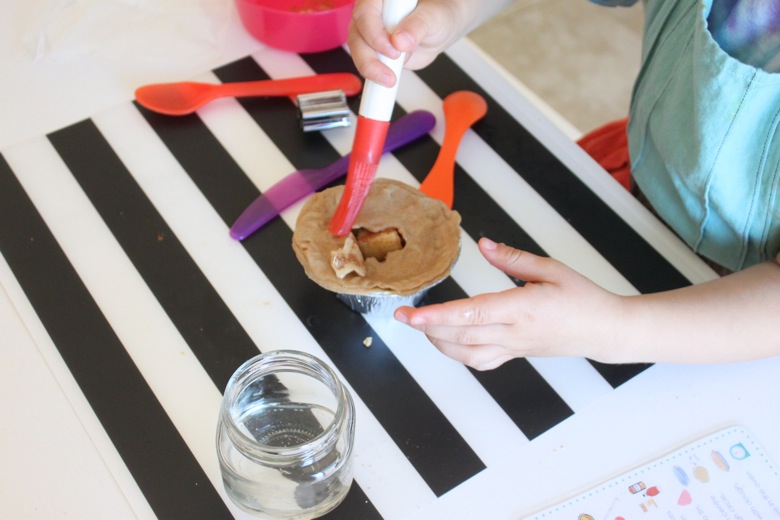 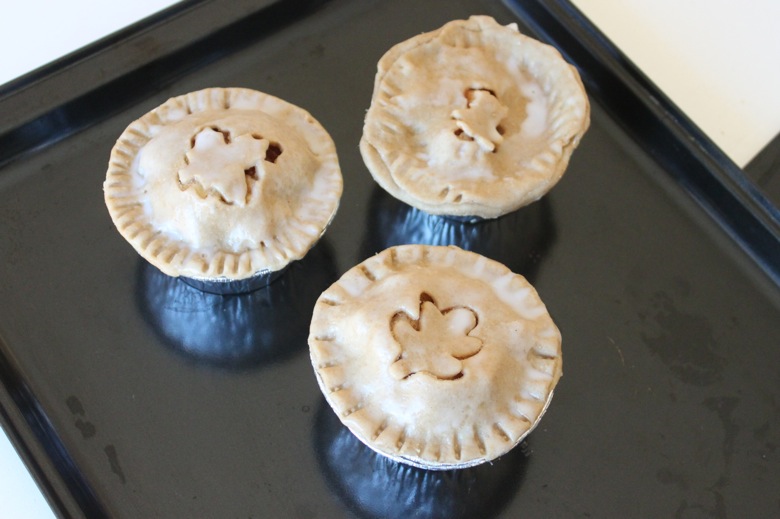 As a final step, we brushed some melted coconut oil onto our crusts before popping the pies into a 350 degree oven for about 25 minutes. 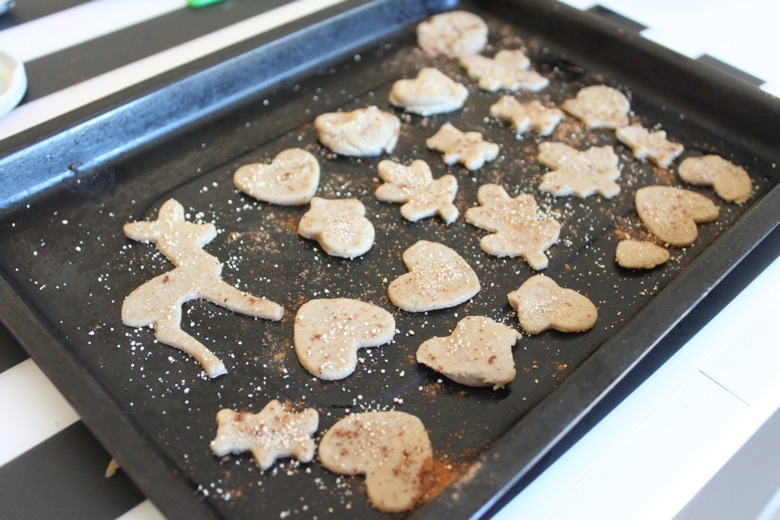 With a little bit of dough leftover, we decided to make ‘pie crust cookies’ by cutting out shapes, brushing them with coconut oil, and sprinkling cinnamon and granulated honey on top. 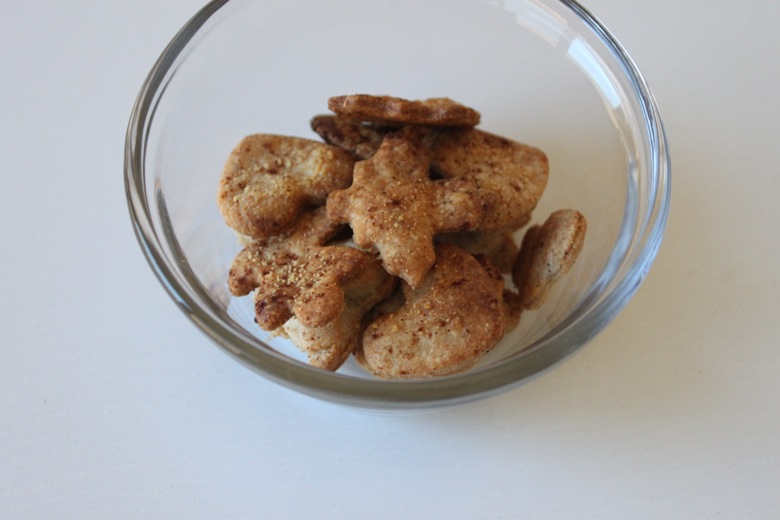 We popped these little gems into our toaster oven until they were crisp and golden, which only took 5 or so minutes. 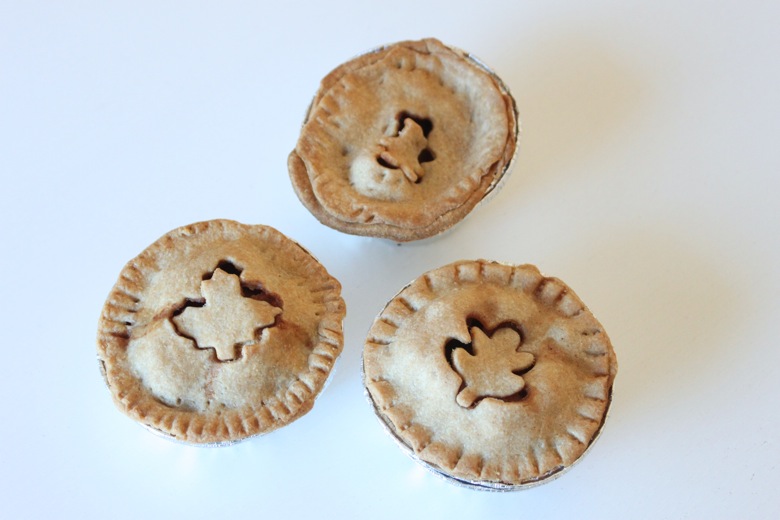 Not too long after, the tops of our mini apple pies were also golden and crisp, which meant it was time to cozy up together and enjoy!