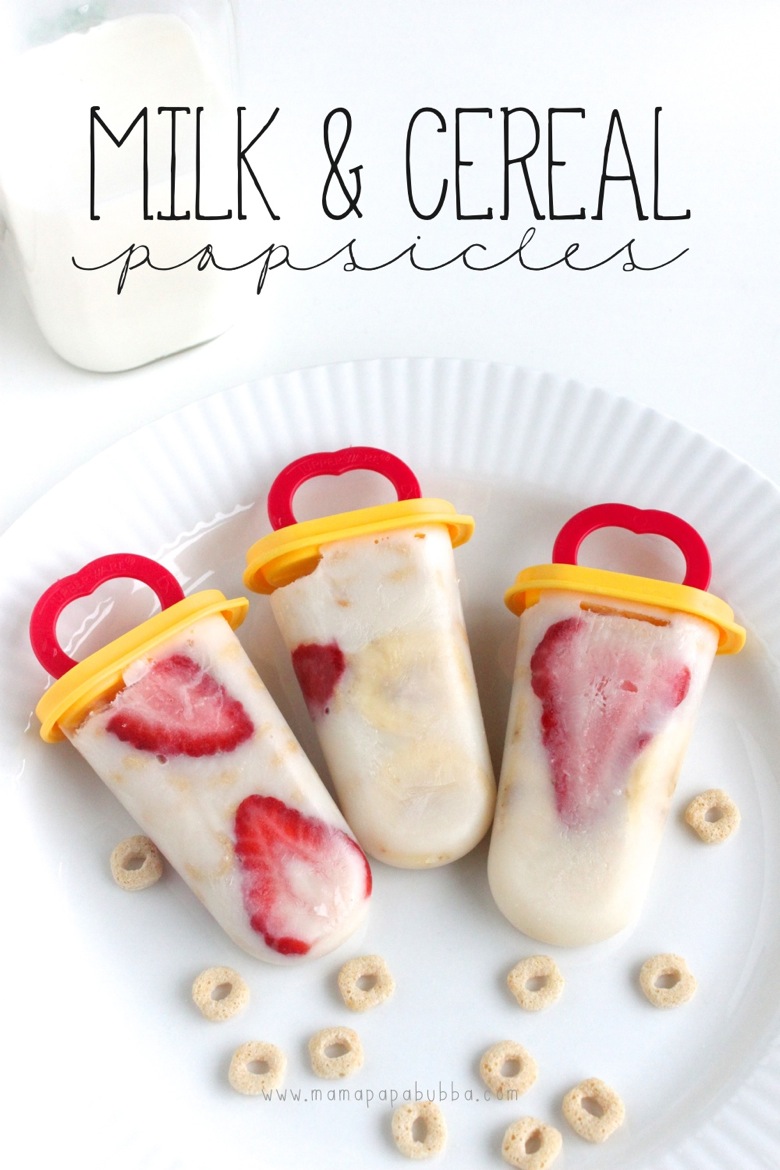 Most kids look forward to pancakes and waffles and other hot breakfasts on the weekend…  But mine?  She looks forward to Saturday morning milk and cereal {absurd little thing}.  Admittedly, I don’t care much for cereal myself, then add in the fact that almost every cereal on the shelf is absolutely loaded with sugar {even the plain / ‘healthy’ ones}, and it just doesn’t happen often in this house.  That being said, we do have a few options I feel good about and we used one to make milk and cereal popsicles today!  Perhaps the weirdest creation ever, but you think outside the box when you’ve got way too much milk nearing its due date.

My first thought was to freeze it in ice cube trays, but what on earth would I do with frozen cubes of milk other than throw them into the very occasional milk-based smoothie we make?  From there it went to popsicles {Miss G’s been on a homemade popsicle bender since being sick just before spring break} and then I thought, hey if she loves milk and cereal, she’ll certainly like milk and cereal popsicles!!  And sure enough, she does.  And though they’re super odd, I’ve got to say that they’re absolutely delicious.  Like to the point of it being hard to resist eating them…  So weird and so good! 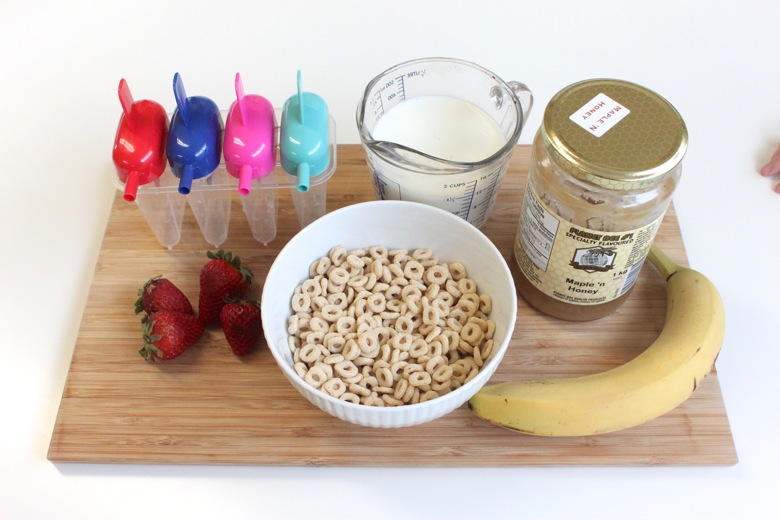 Plus so long as you find a decent o-shaped cereal {check out Barbara’s, Ella’s Kitchen, One Degree, Orgran, and Love Child Organics}, they’re fairly nutritious!

Here’s the line-up of ingredients… 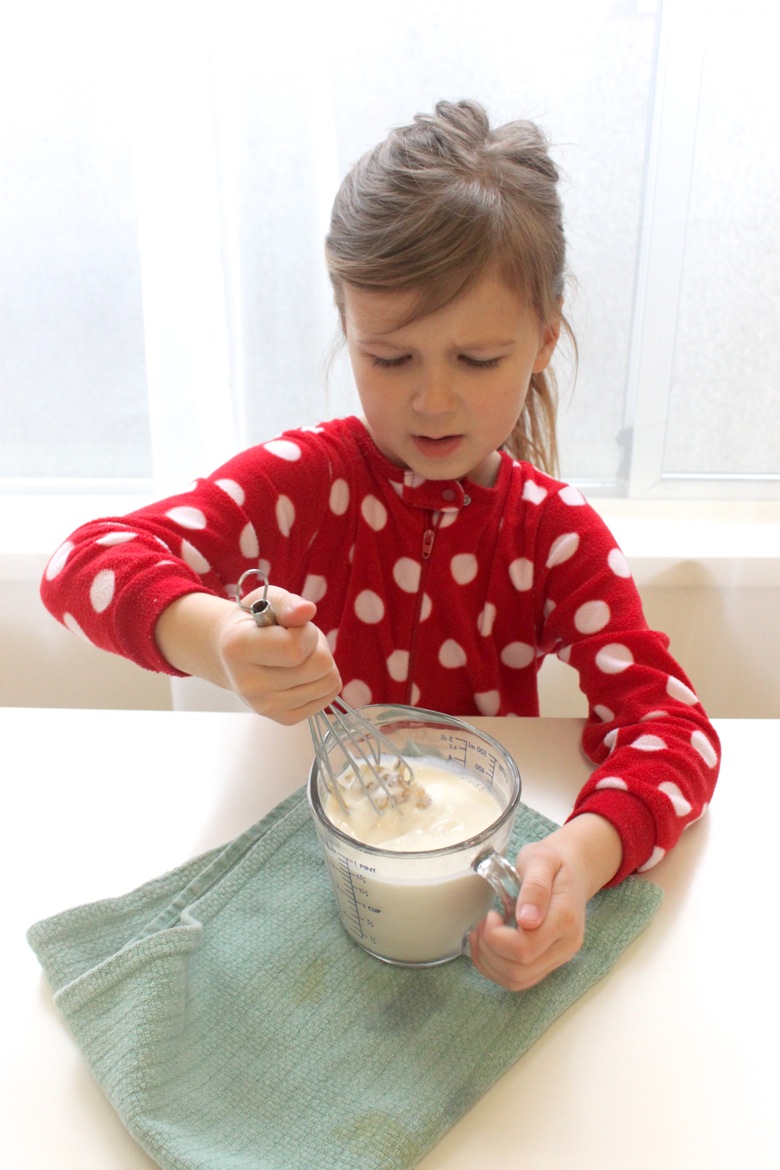 Another wonderful thing about milk and cereal popsicles?  Kids who have spent some time in the kitchen can totally make them on their own!  First Miss G whisked some honey into our milk…  This is about as difficult as it gets as you do have to stir it a little bit in order to get it to dissolve.  How sweet you make your ice lollies is up to you, but we used about 2 tablespoons of honey for 2 cups of milk and our finished popsicles are more than plenty sweet. 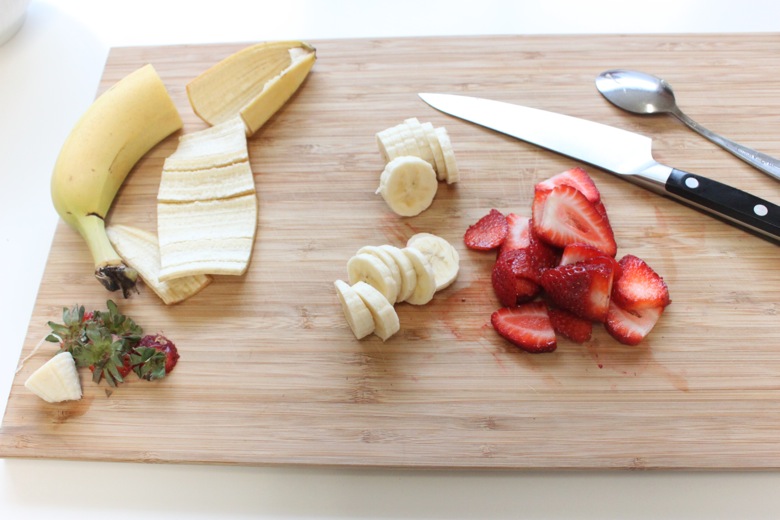 Next, chop your fruit into thin slices.  This was a great opportunity for Miss G to brush up on her sharp knife skills as both bananas and strawberries are fairly easy to cut.  It’s been a while since she last used a sharp knife {even though she started using knives early on}, but she did great! 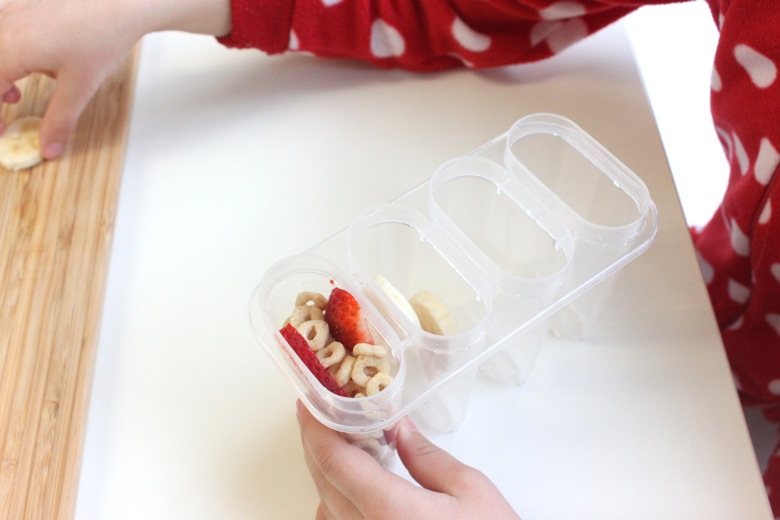 With that, we began assembly. 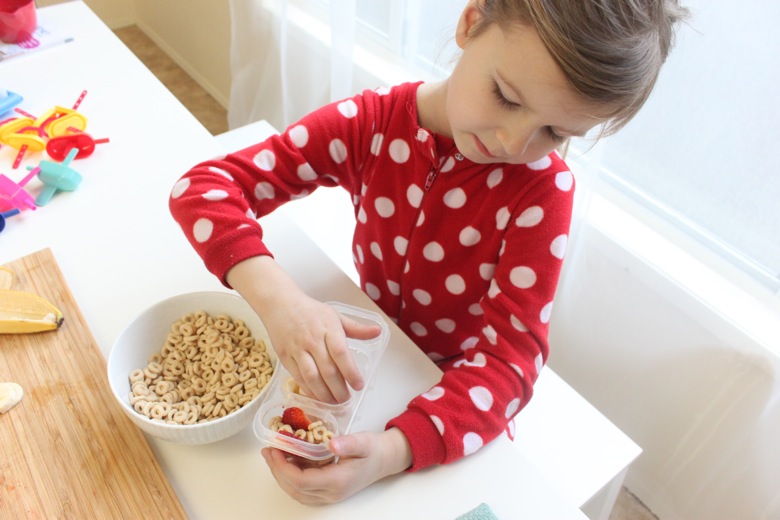 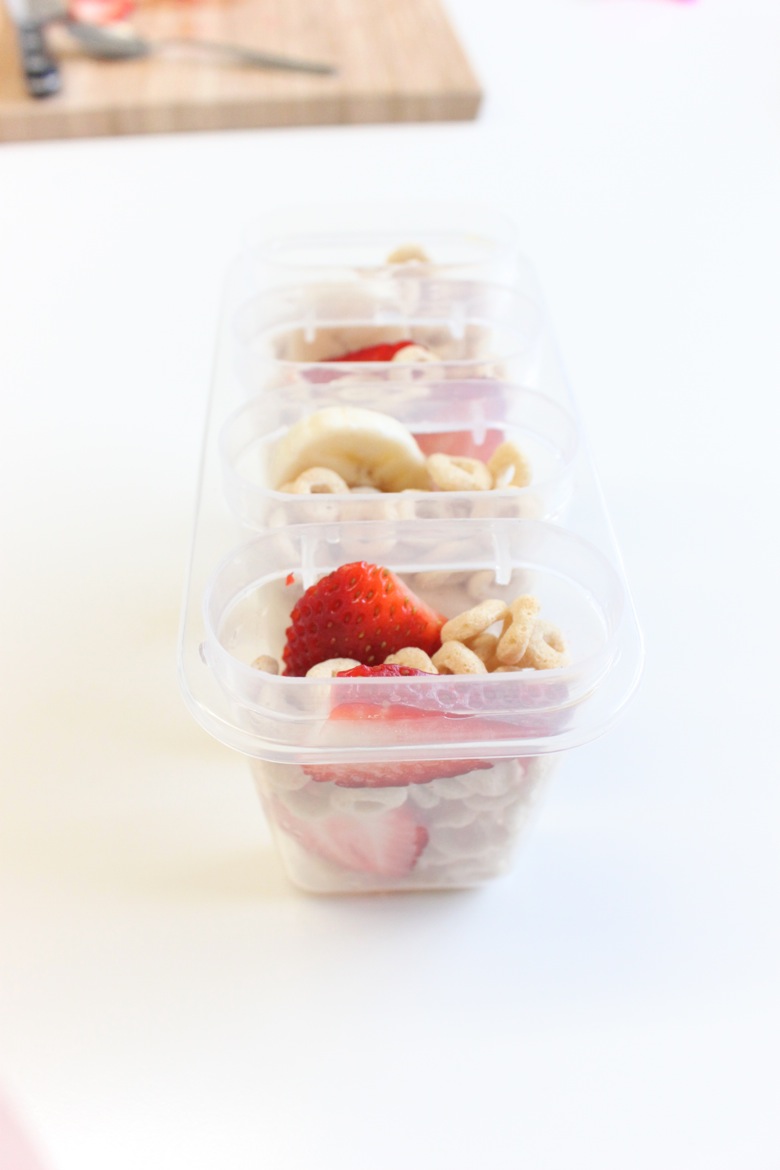 Our method?  First we stuck our banana and strawberry slices to the outside edges of the popsicles moulds, then we basically filled up the remaining space with o-shaped cereal. 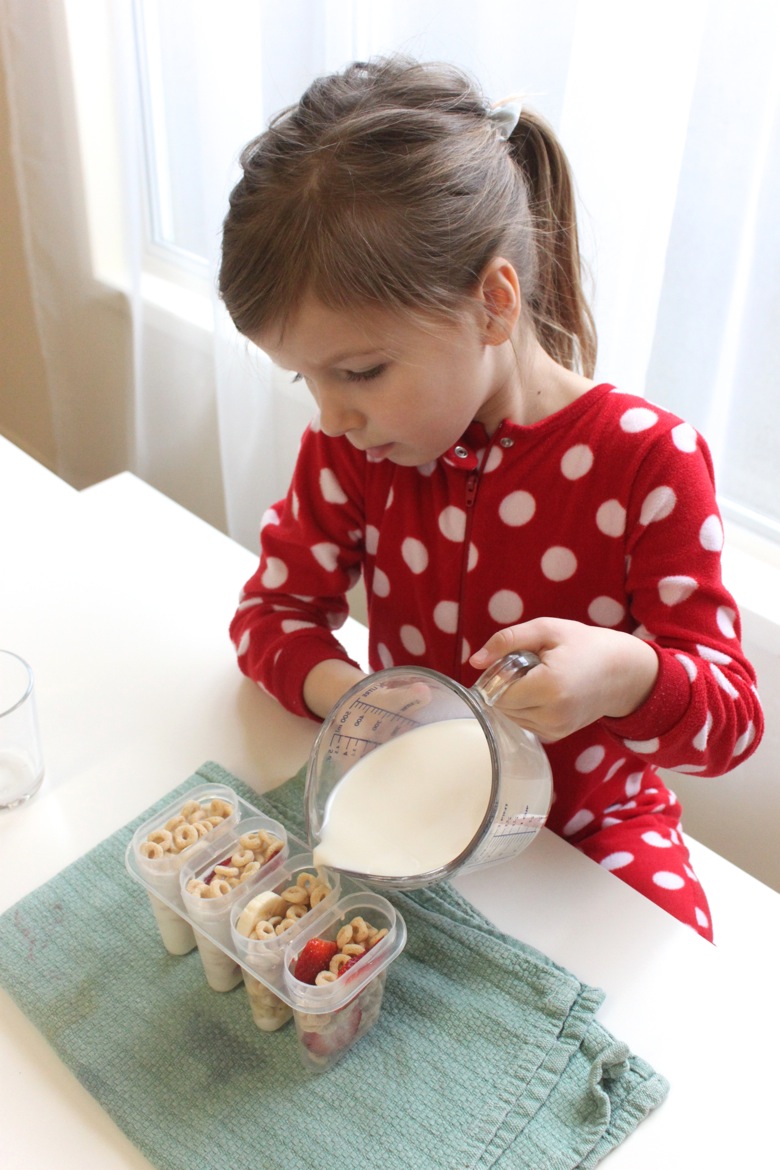 Then we simply filled the moulds up to the top with our honey-sweetened milk. 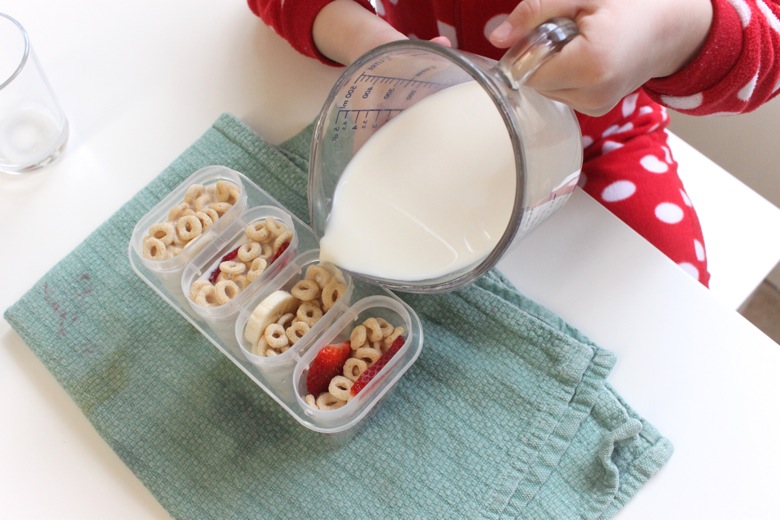 This is perfect job for little hands as pouring with control does take some practice. 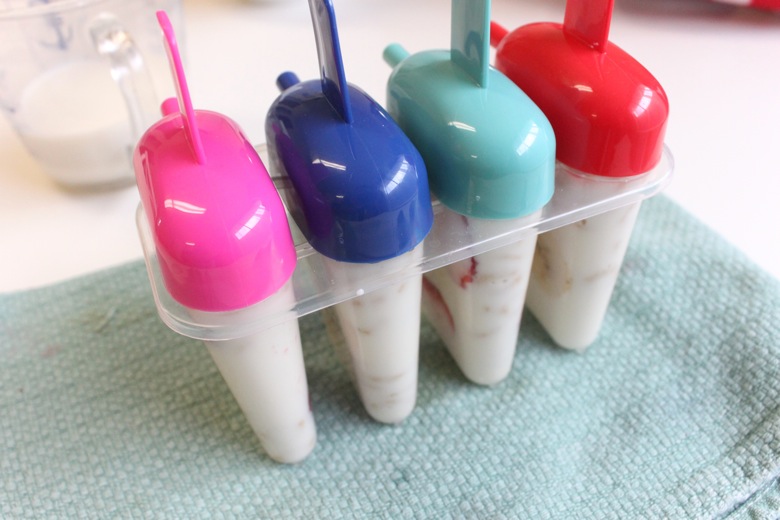 Afterwards, we popped the lids onto the moulds and put the whole thing into the freezer. 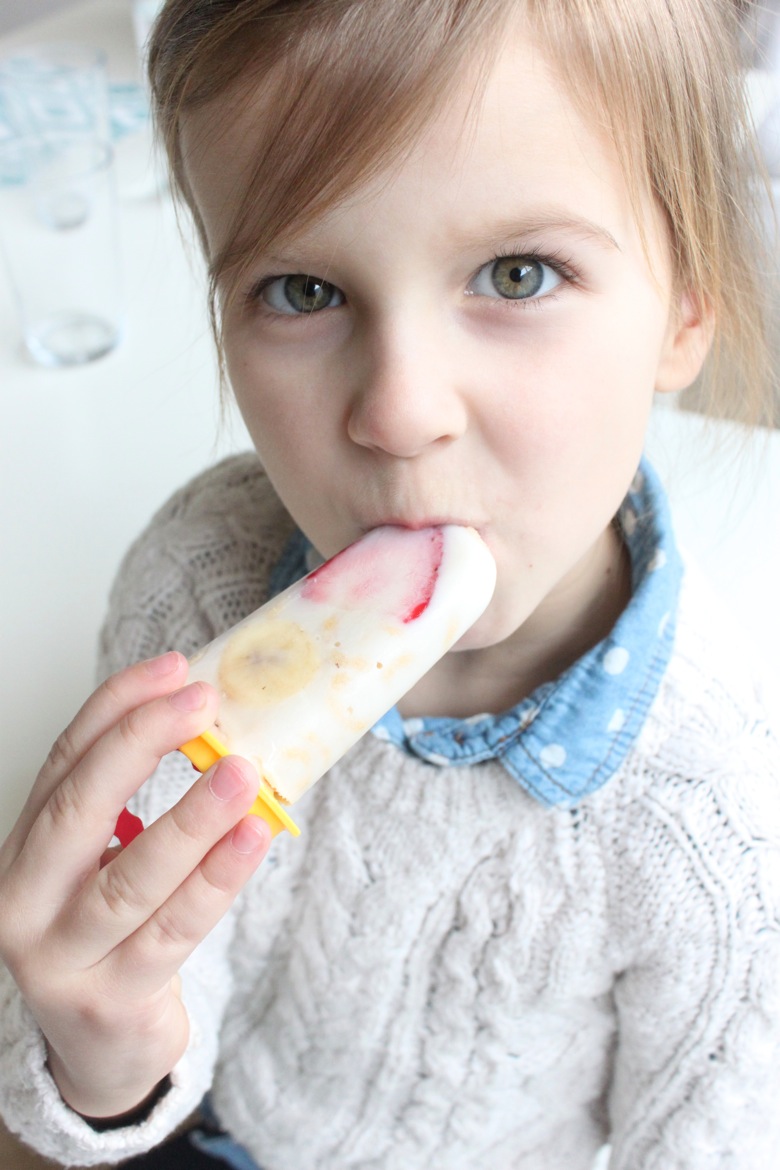 I honestly wasn’t sure how they’d turn out, but they got immediate rave reviews from a certain little ice lolly connoisseur. 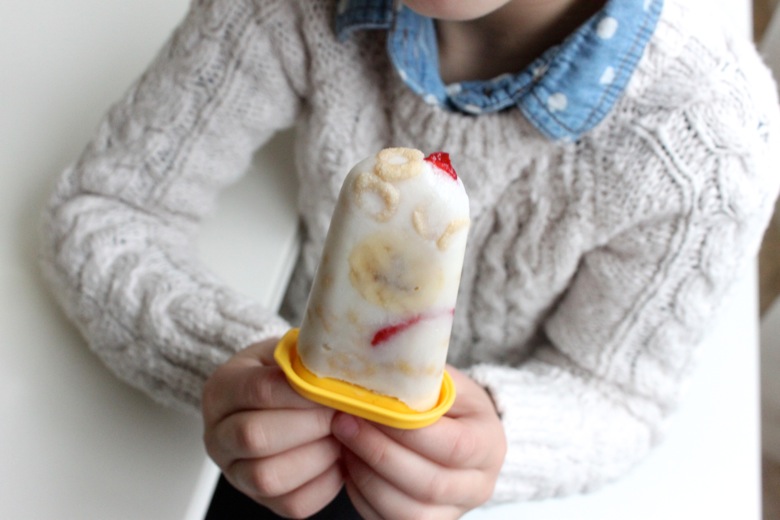 The cereal is frozen, so it doesn’t taste the least bit soggy and while I thought that milk-based popsicles might be super hard and icy, the fat in the milk combined with the honey is enough to keep the texture easily biteable.  Overall, a total win! 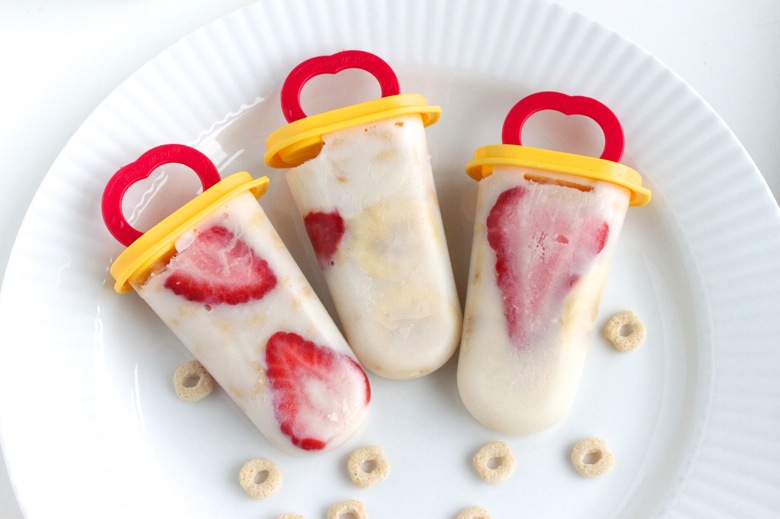 We’ll certainly be adding these to our regular popsicle rotation.