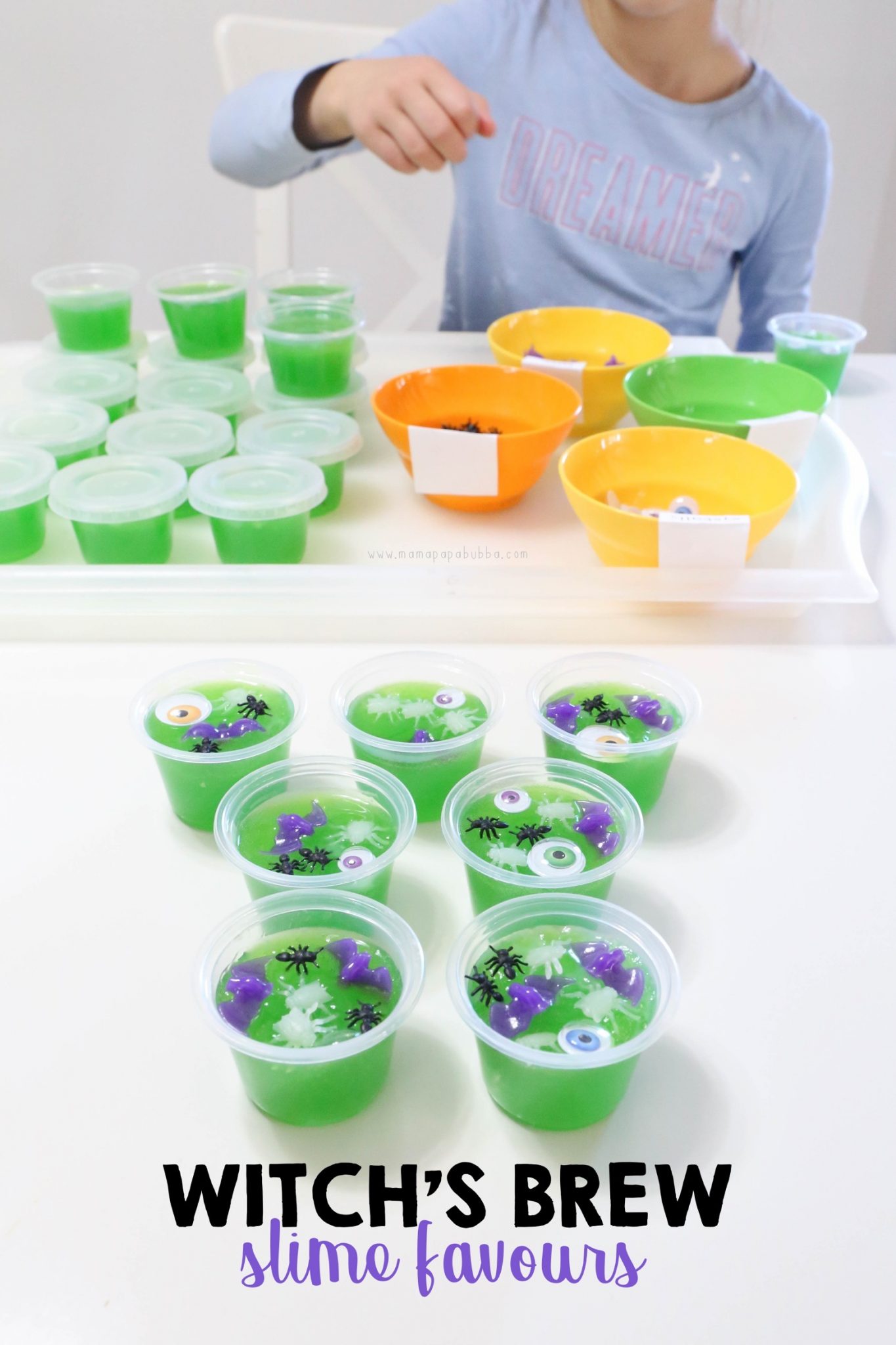 I can’t believe Halloween is nearly here…  Didn’t we just start the school year?!  Miss G and I haven’t talked about brining something to share with her classmates this year {yet at least – I’m guessing this little tradition just dies off as the kids get older…?}, but we made these witch’s brew slime favours last year and they were such a huge hit! 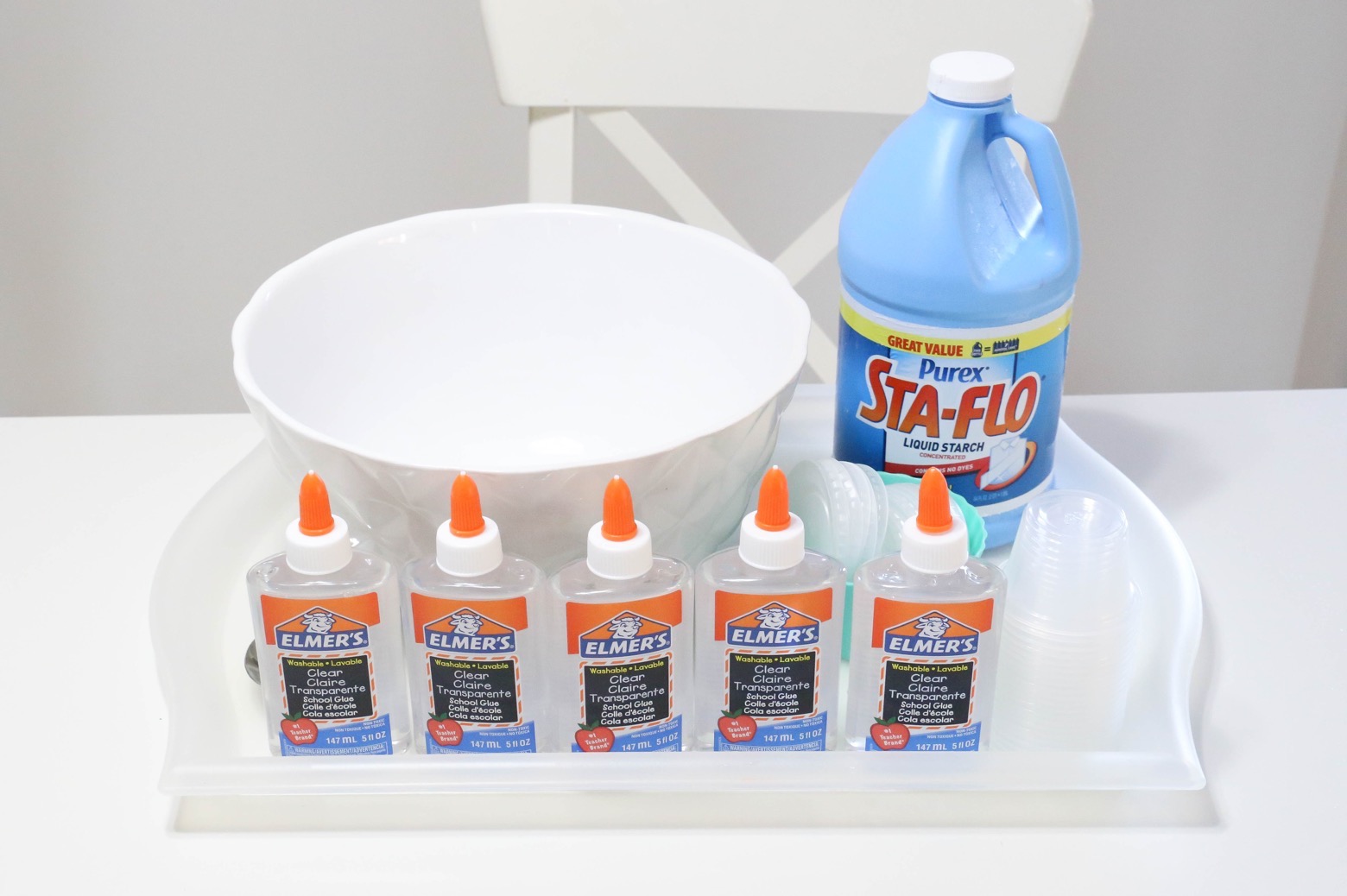 You could use any slime recipe you like, but I have to say that I do really love Sta-Flo slime when it comes to kids making it on their own.  Don’t get me wrong – I lovvvvve using Borax as a slime activator too, but Sta-Flo is just so forgiving and is harder to overdo, which is a good thing when kids are making their own slime.

* For the record, these were a really tough buy for me… Previously we’ve gifted friends slime in mini mason jars, but with the way Miss G’s classmates seem to chuck their backpacks onto the concrete after school, I figured these were a safer option.  Grae made me feel better about the purchase by very enthusiastically saying, ‘Oh mom…  My class LOVES slime.  So they’ll probably – they’ll deffffinitely reuse these for other slime projects afterwards.’  Hah.  Not sure if I should be horrified or proud. 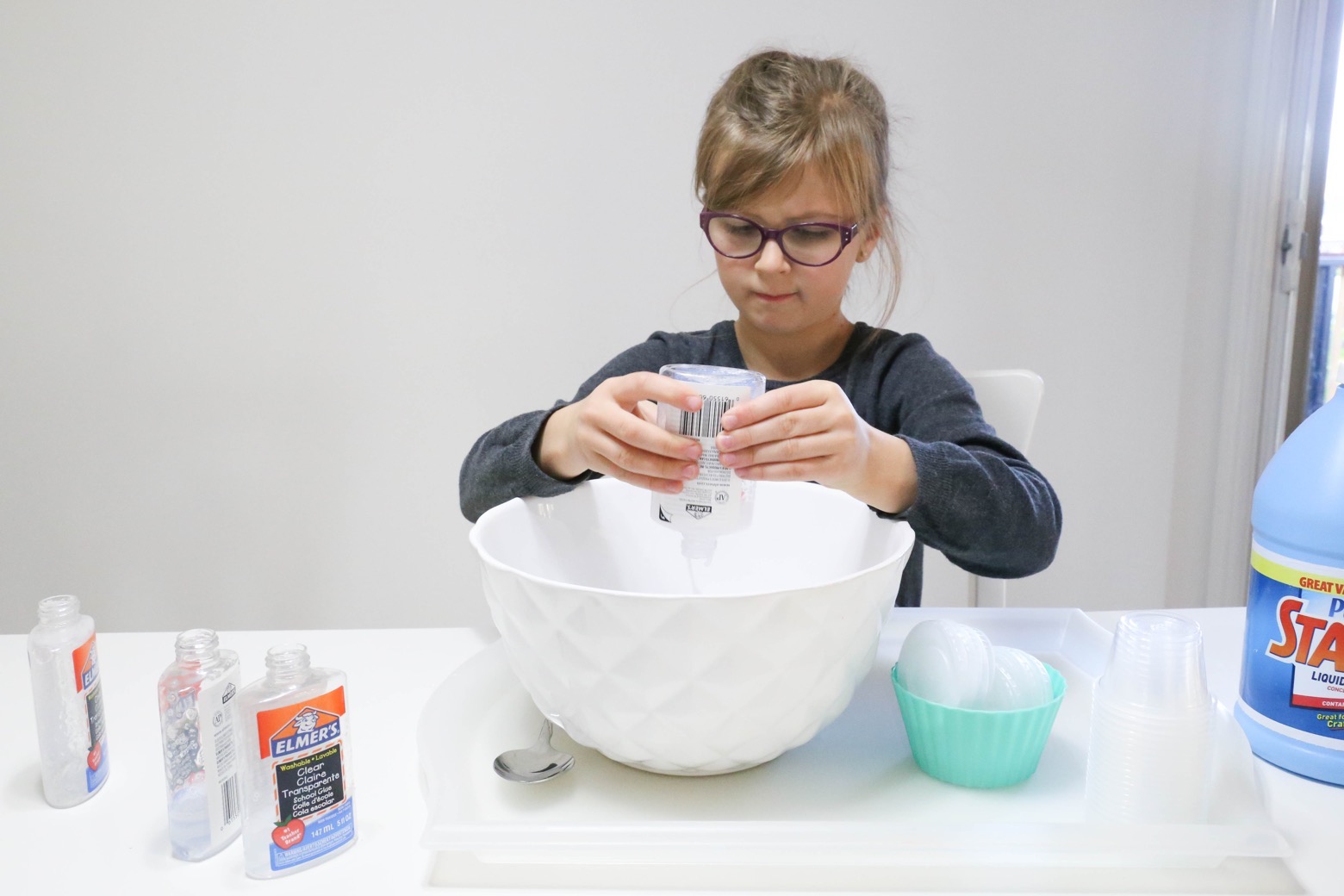 Whipping up Sta-Flo slime really couldn’t be easier.  Just empty out your glue bottles into a big bowl… 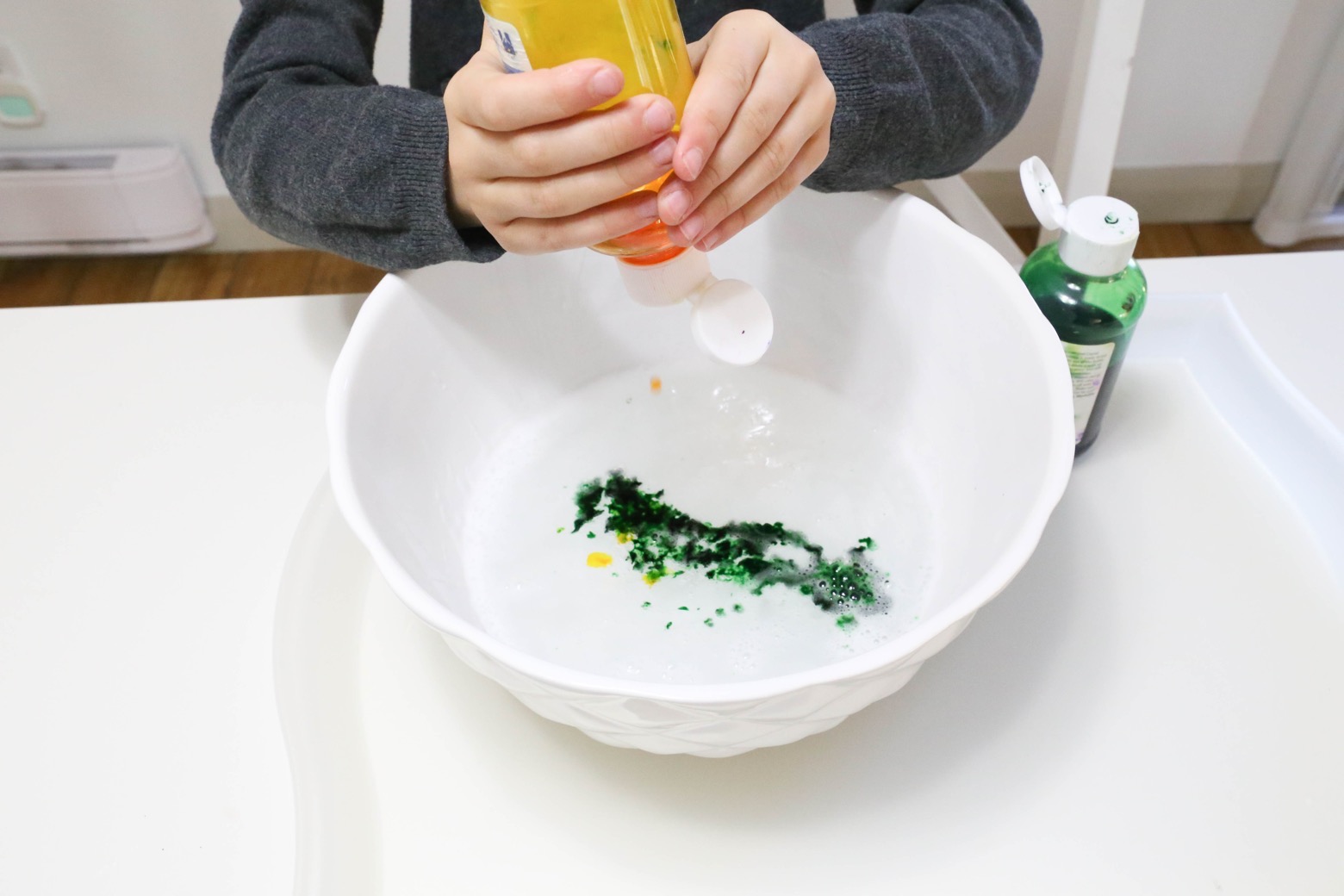 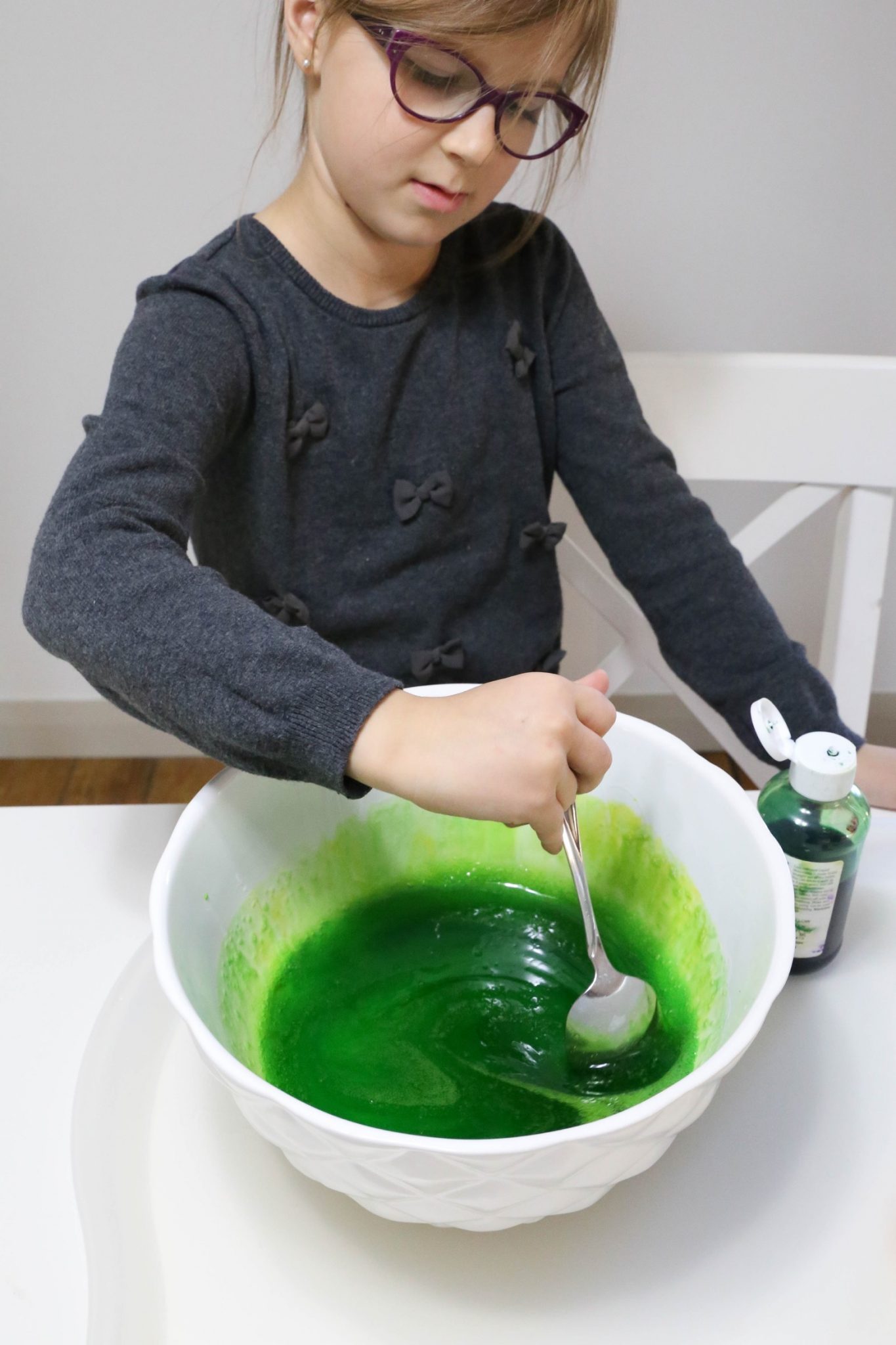 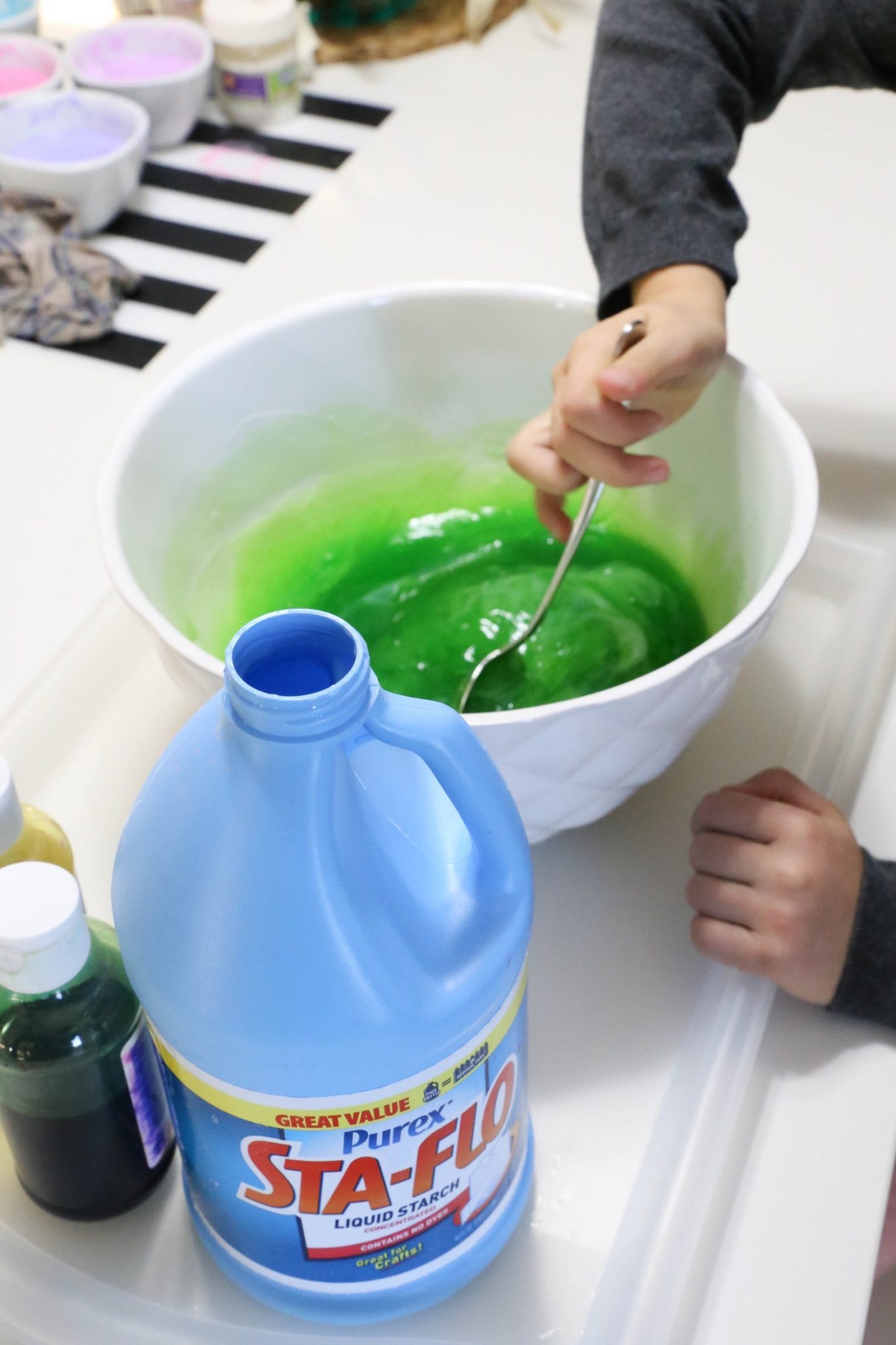 And then add slightly less than an equal part of Sta-Flo Liquid Starch.

Just as a recap, the basic Sta-Flo slime recipe is: 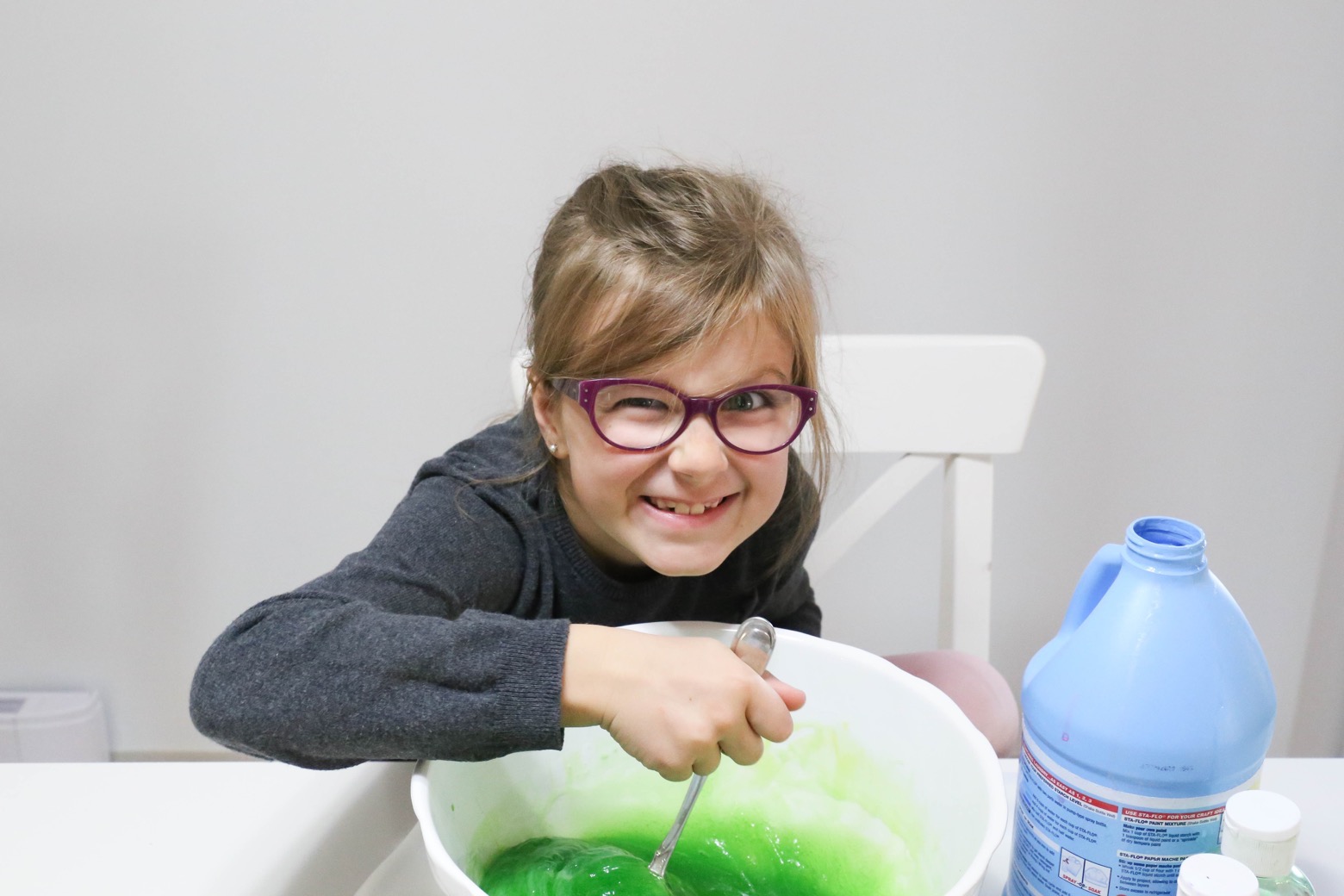 Then stir it up…  {This is my little witch mixing her brew – hah!} 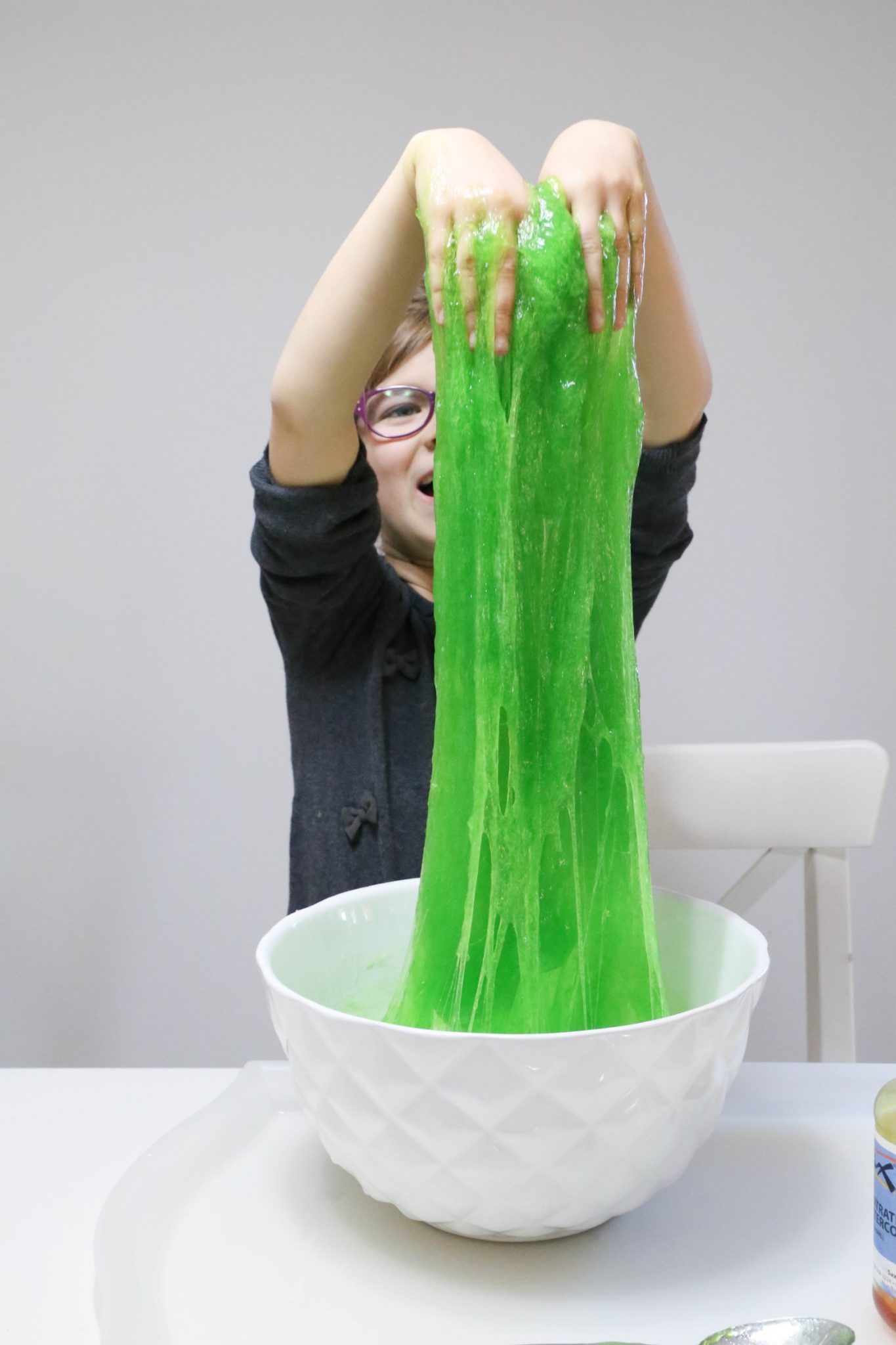 And finish it off by getting in there with your hands and kneading it until it’s uniform and no longer sticky.

And case you can’t get your hands on a bottle of Sta-Flo, our simple Borax-based recipe is as follows:

Just mix the glue, warm water, and colouring together until uniform, then add in the Borax solution and stir until it comes together in a clump.  Finish if off by kneading to take away any residual stickiness. 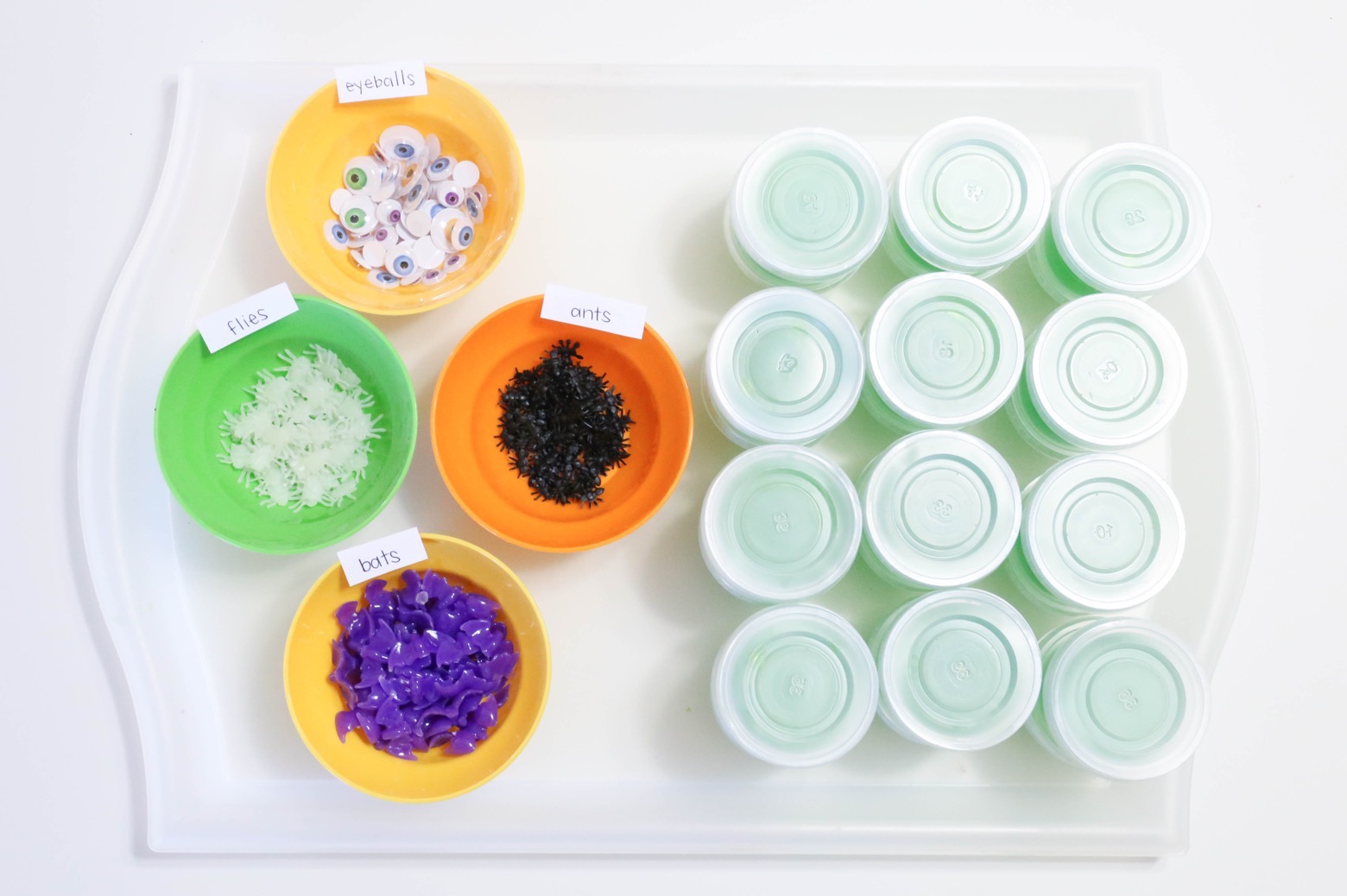 The night we made this Miss G packaged the slime up into the little portion containers and then the next day when she got home from school, she found this. 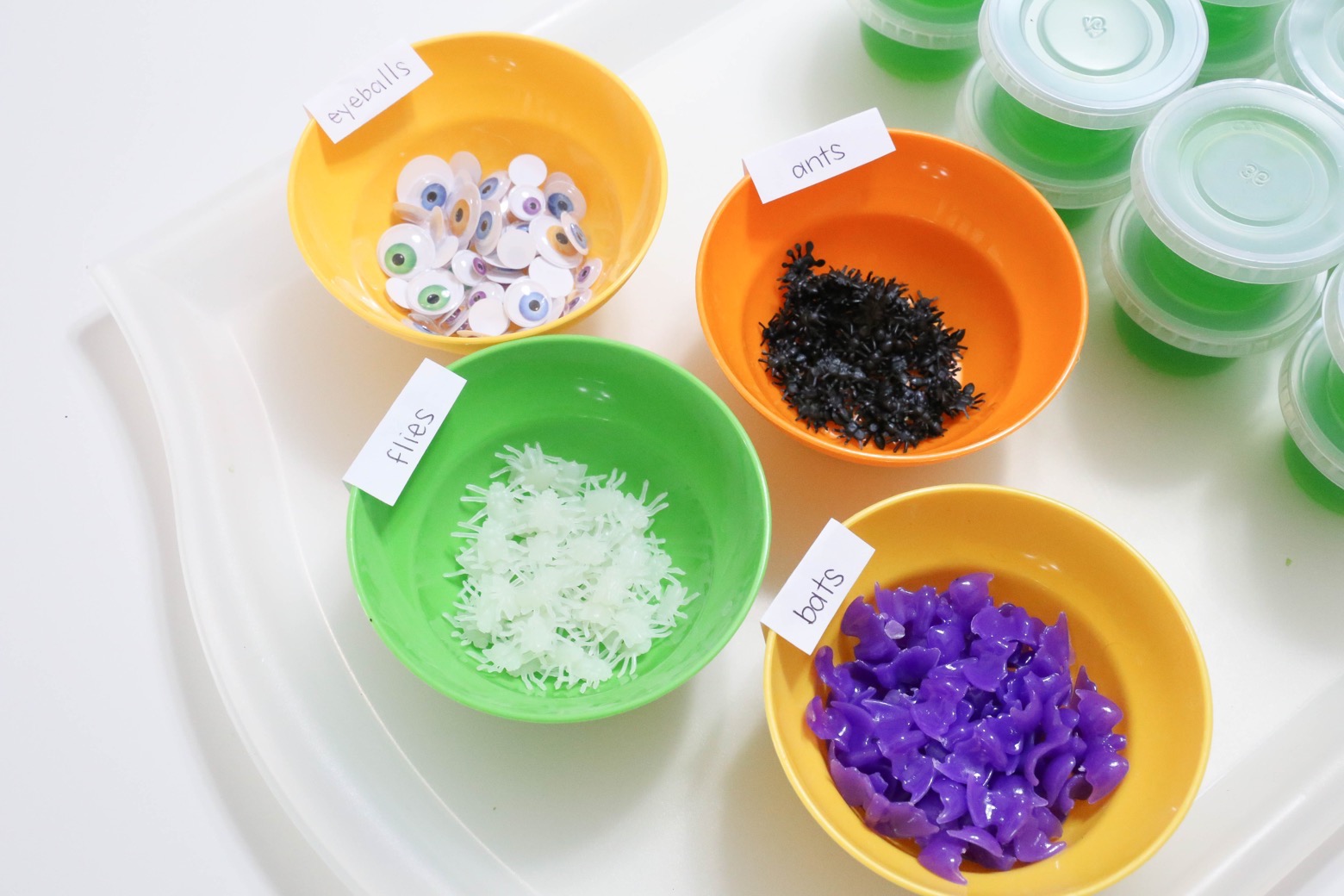 Eyeballs, flies, ants, and bats.  All purchased at our local Dollarama and all perfect ingredients for witch’s brew slime favours. 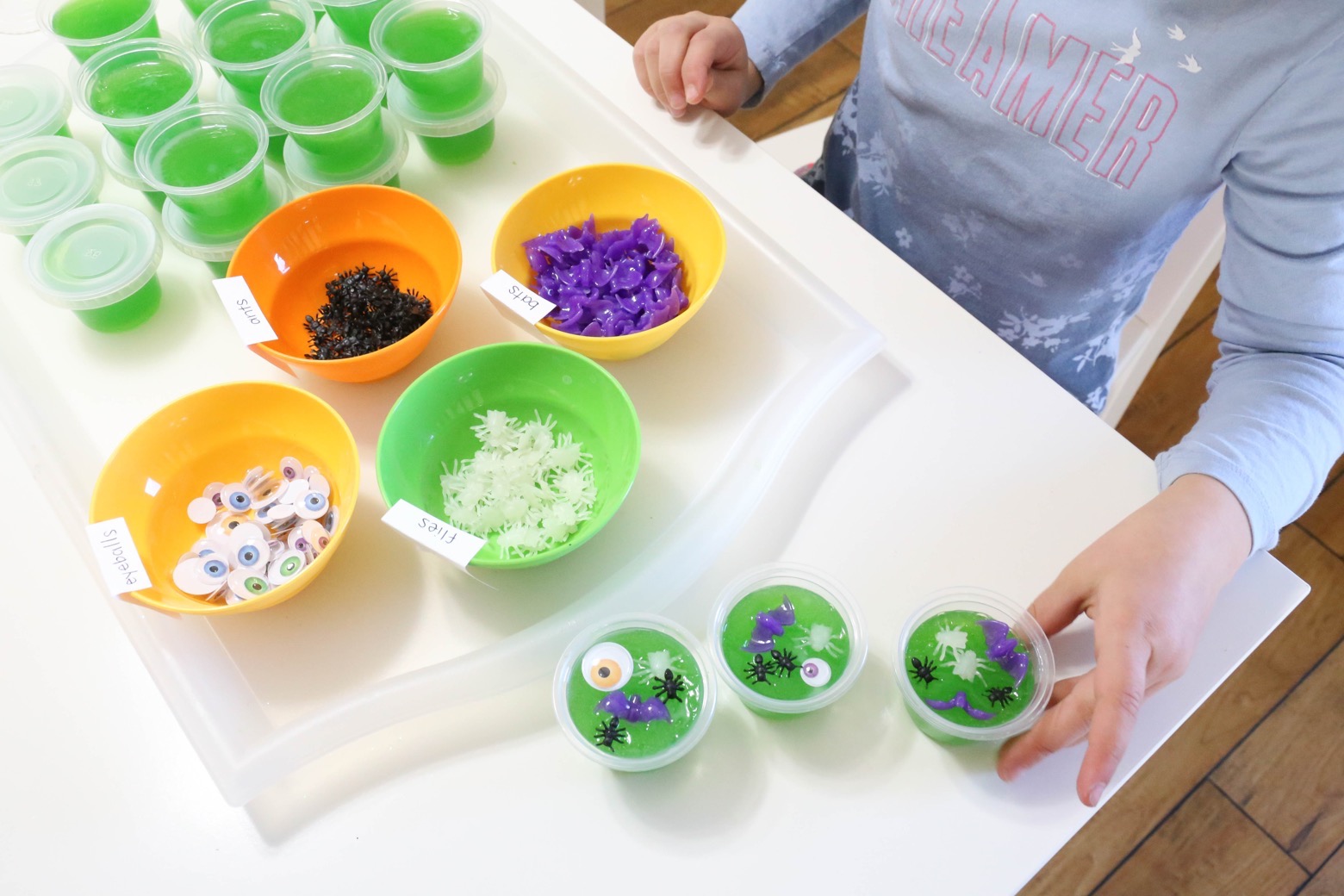 With the slime already made and packaged, all that was left to do was to add some spooky ingredients to transform it into witch’s brew. 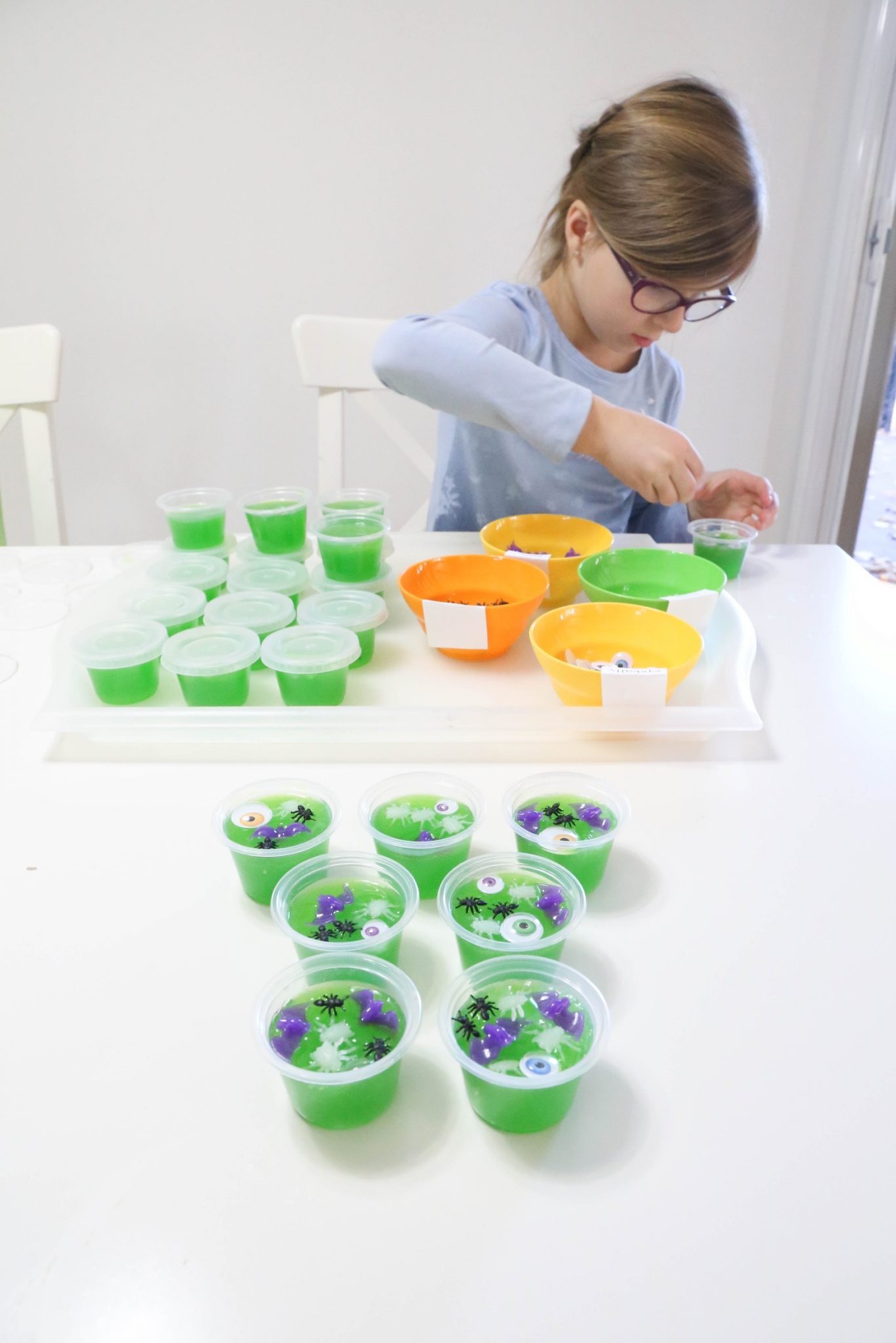 She simply placed the goodies on top of the slime and then closed the little cups back up. 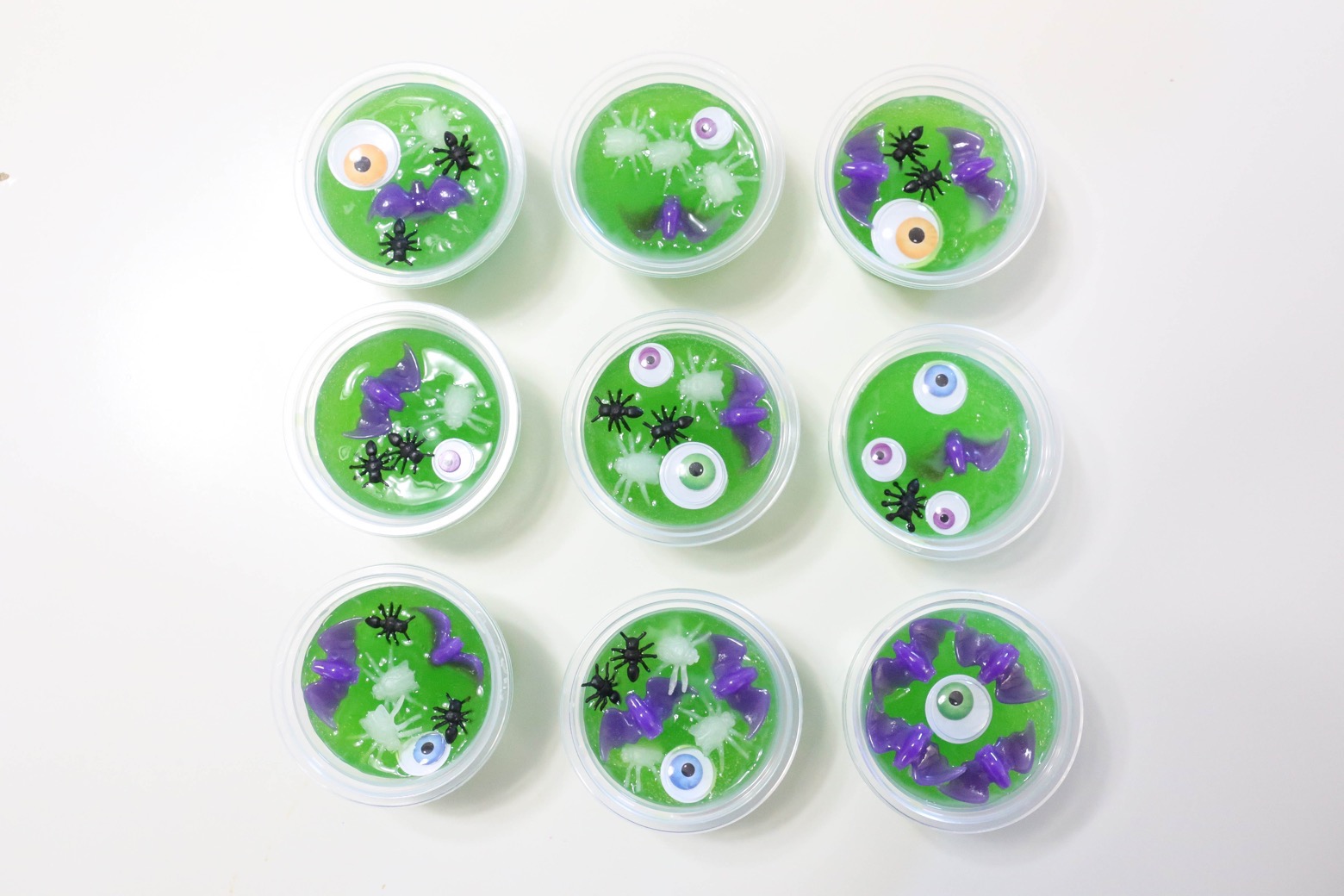 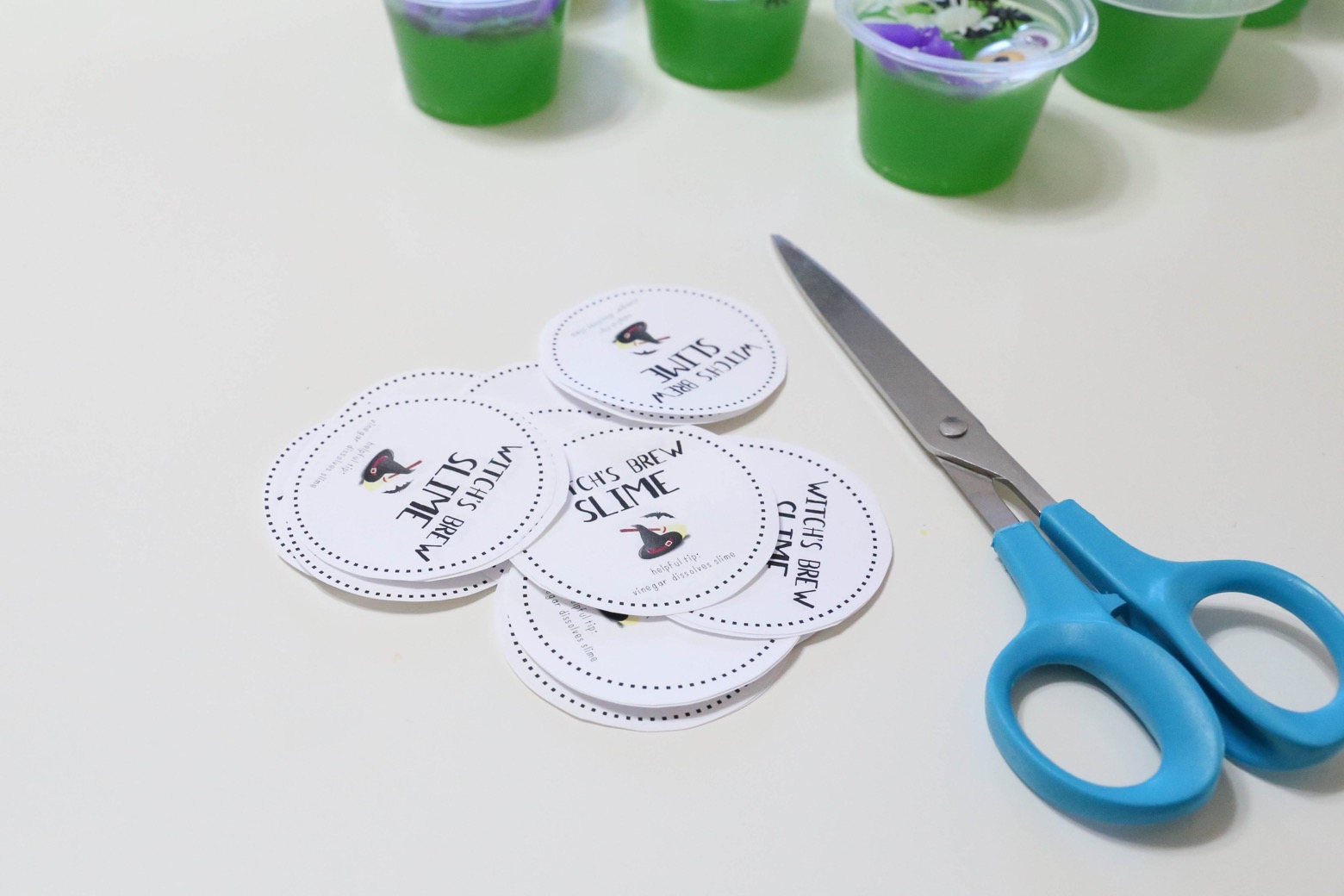 And while Miss G worked on that, I quickly popped onto my computer and whipped up these little labels and cut them out. 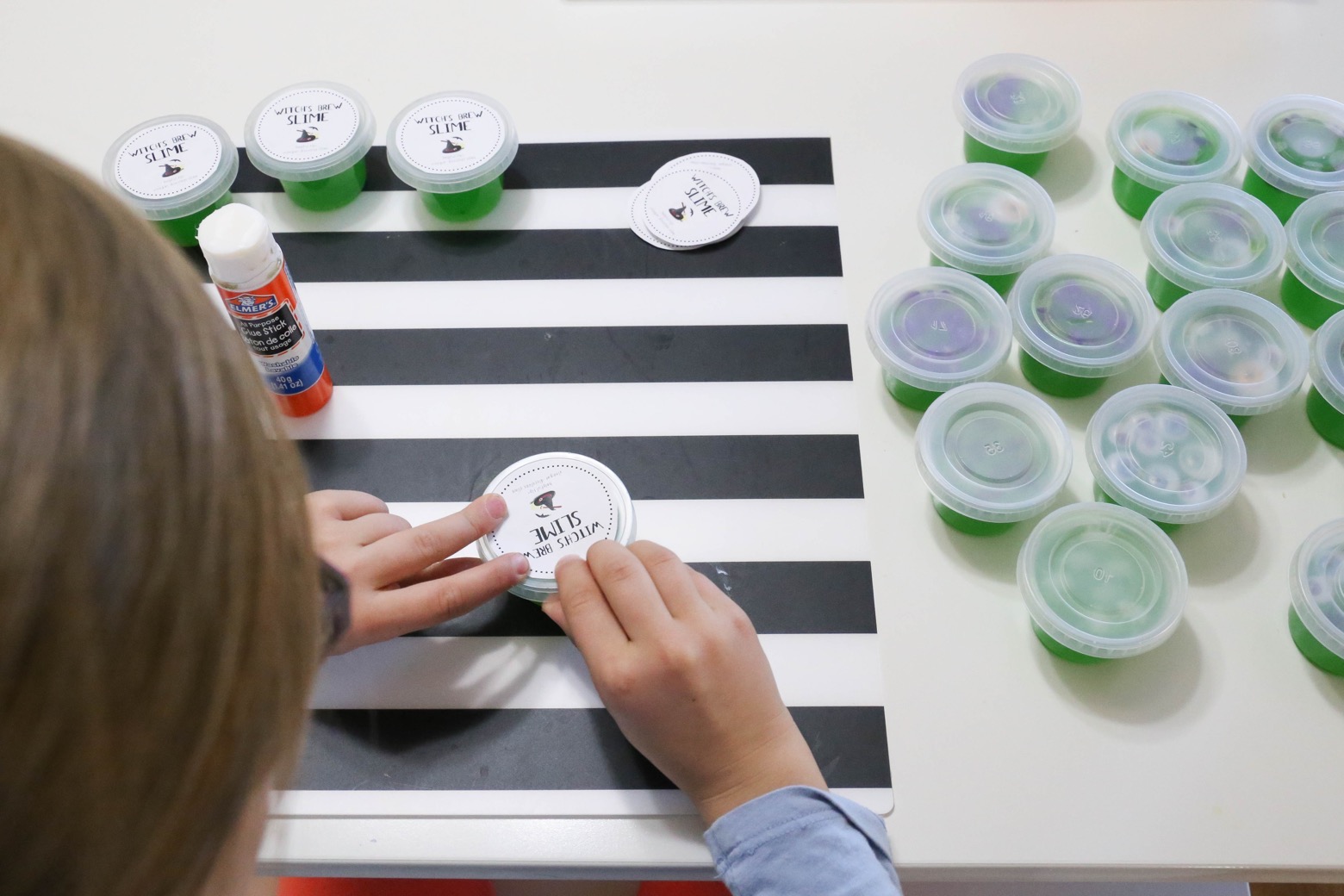 Then Miss G used a regular old glue stick and attached them to the lids. 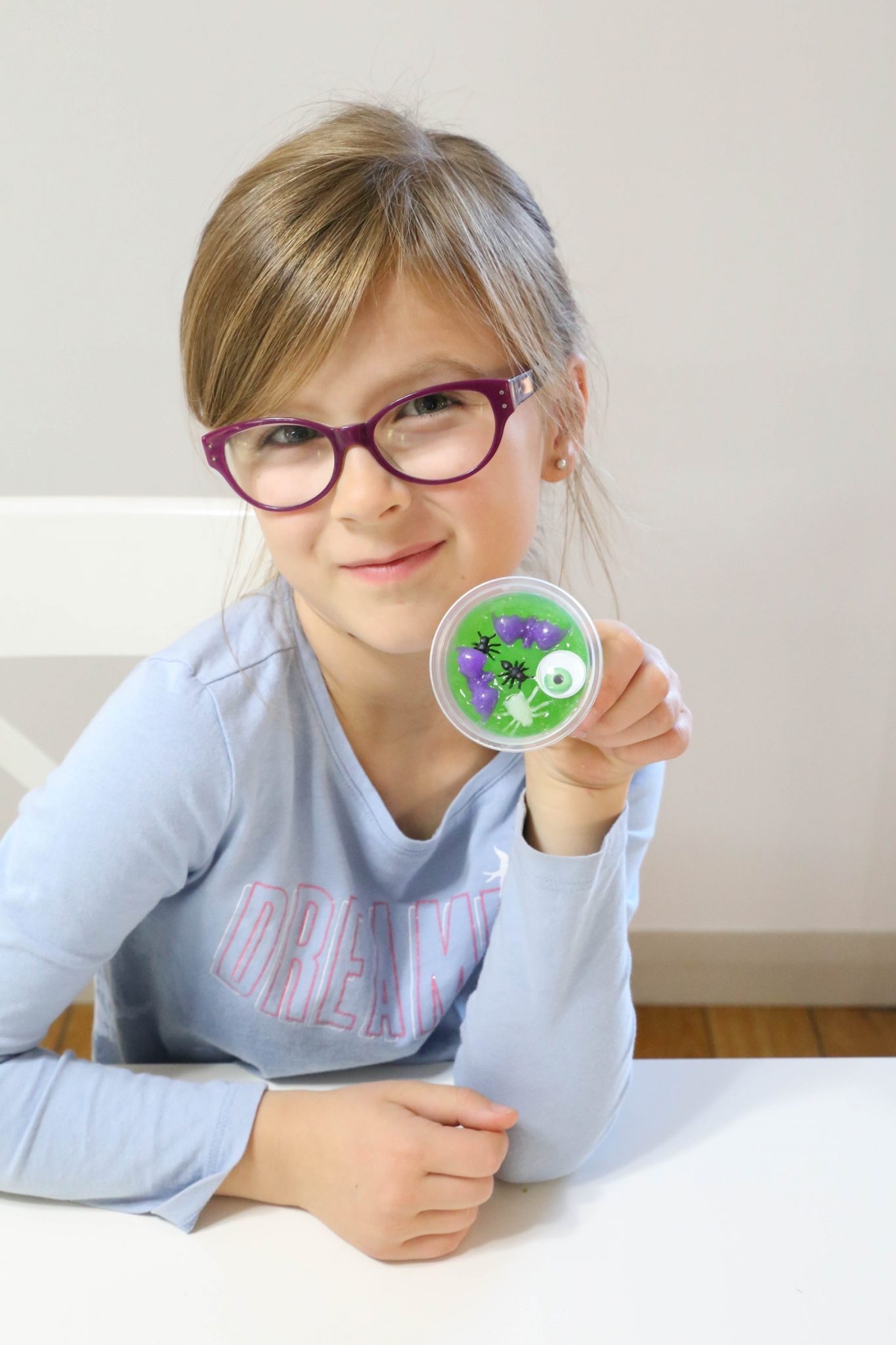 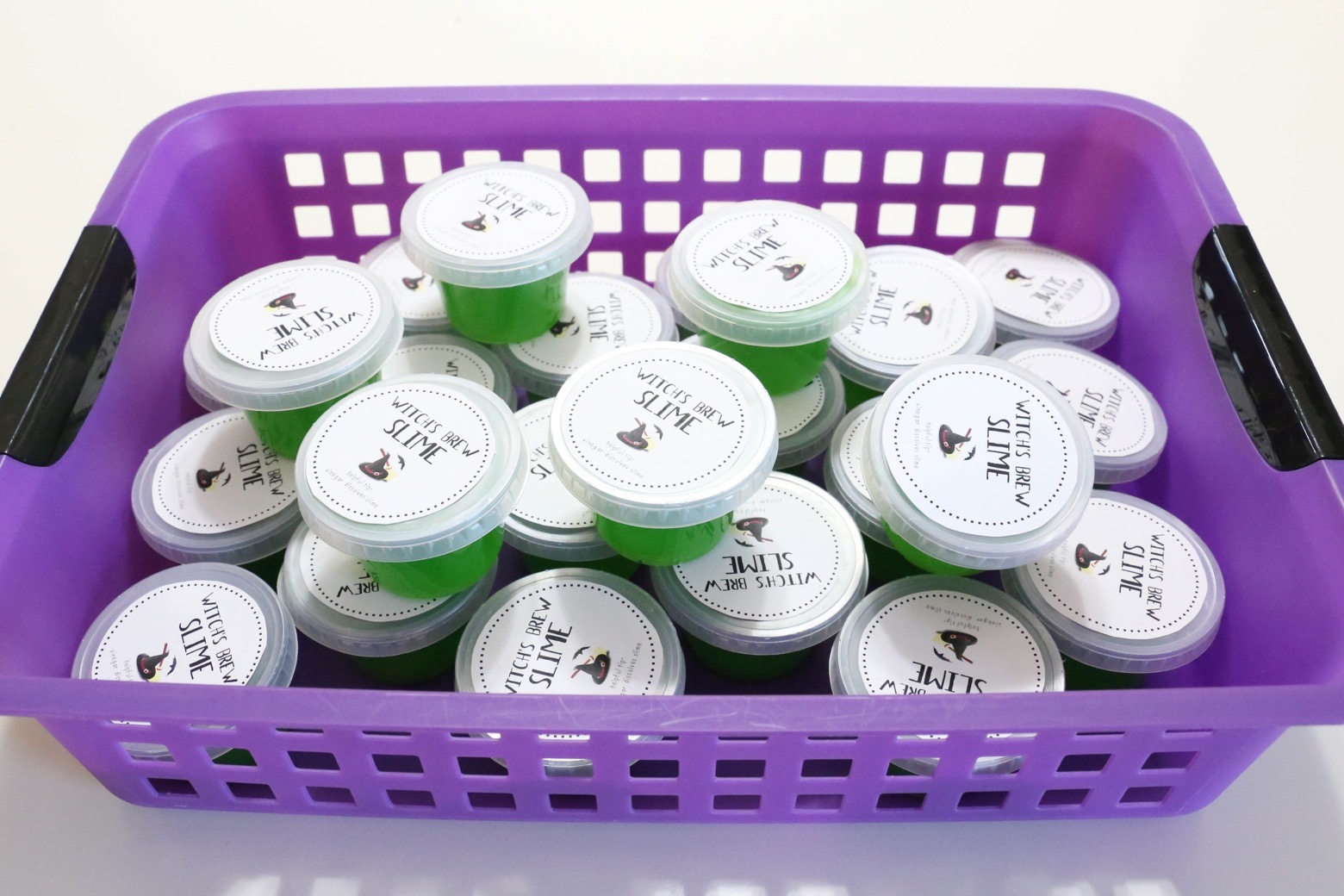 And that’s it!  We popped them into a little carry bin and instead of bringing candy to share with her classmates, Miss G brought slime!