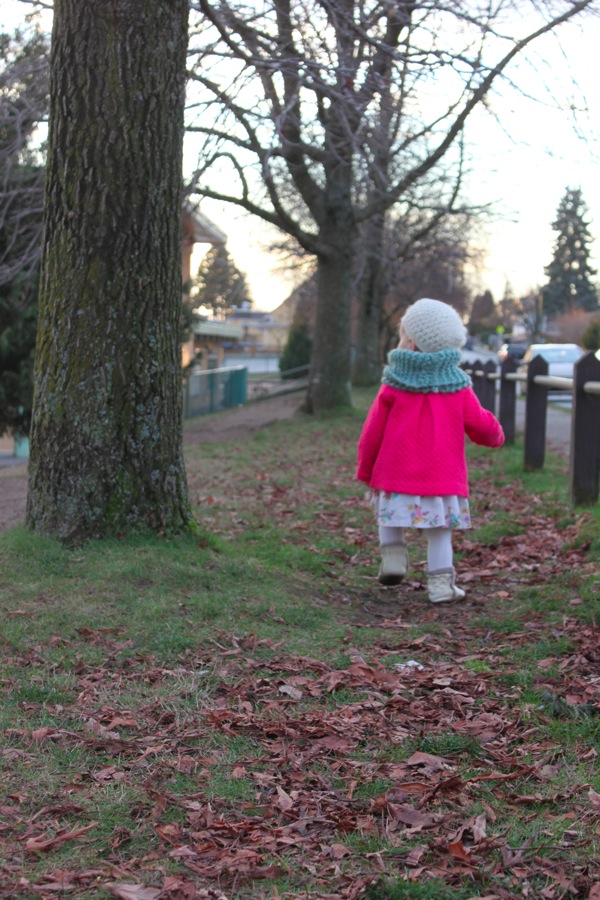 The weather has really been warming up here in Vancouver, so this afternoon we decided to head out on a little walk around the neighbourhood. 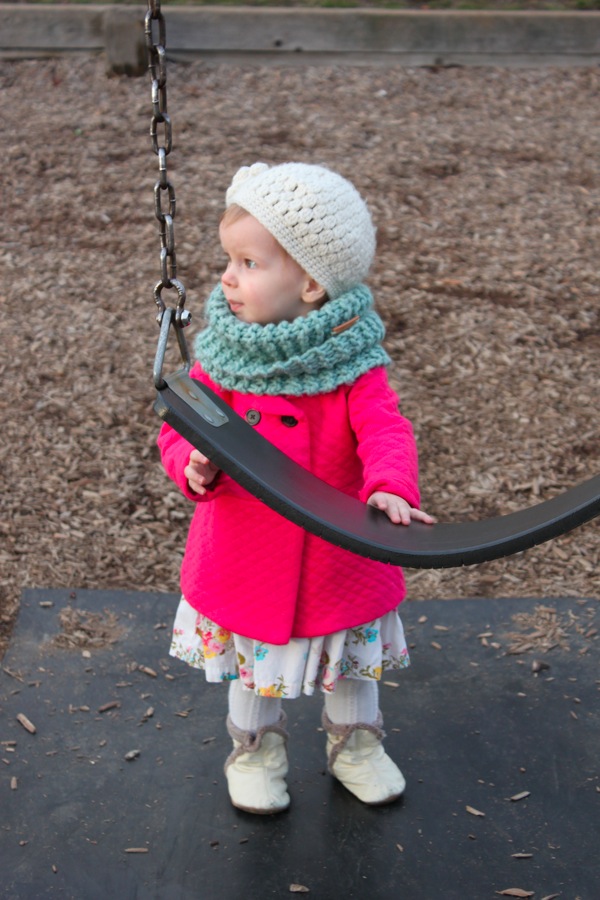 There were some kids playing basketball at the elementary school across the street, so naturally, that’s where my little ball-obsessed lady led us. 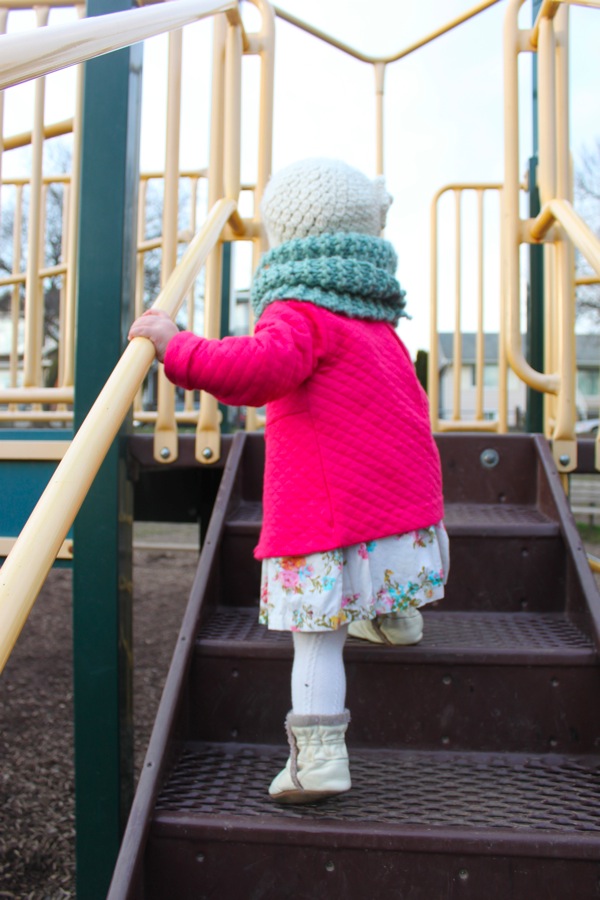 You can’t go to the school without stopping by the playground, so that’s just what we did.  (Notice that Grae’s walking up the stairs rather than crawling up them…  She’s been working on that lately.) 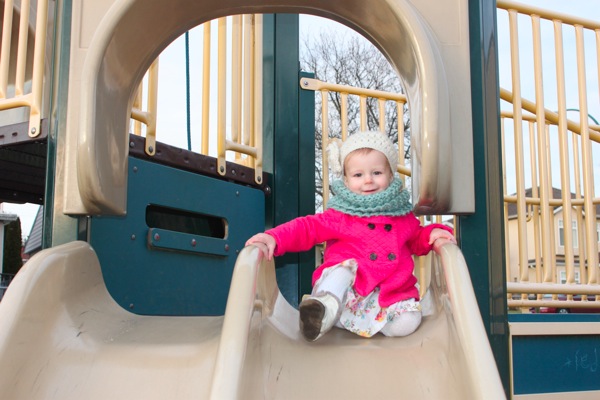 Miss G is becoming so independent at the playground…  She was able to get herself up the stairs, across the rickety bridge, and down the slide several times all on her own. 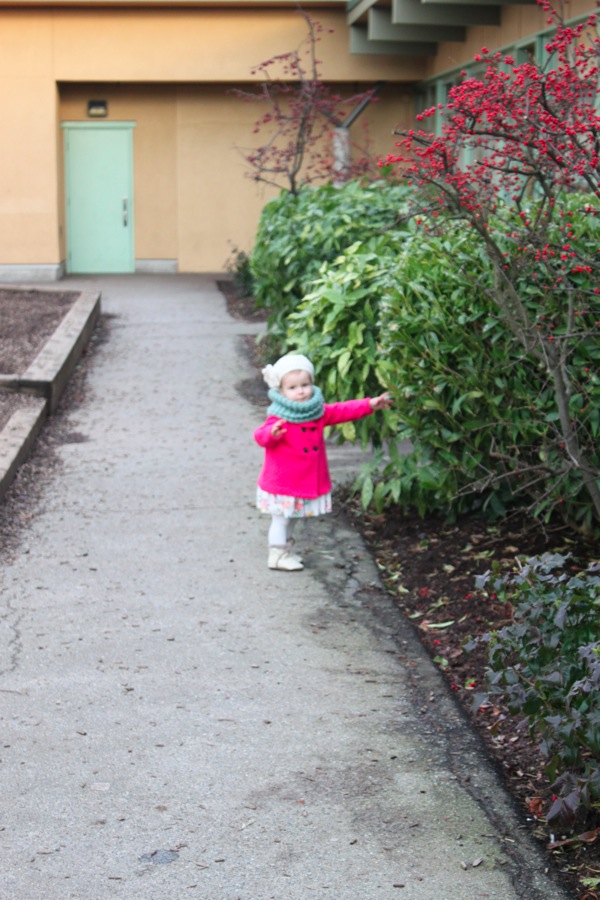 Satisfied with her time at the playground, we were back on our way.  On a sort of funny side note – Grae was so into these shrubs that she lost her footing while sniffing them and fell right in!  Oopsies.  She was a little surprised, but just fine when I pulled her out. 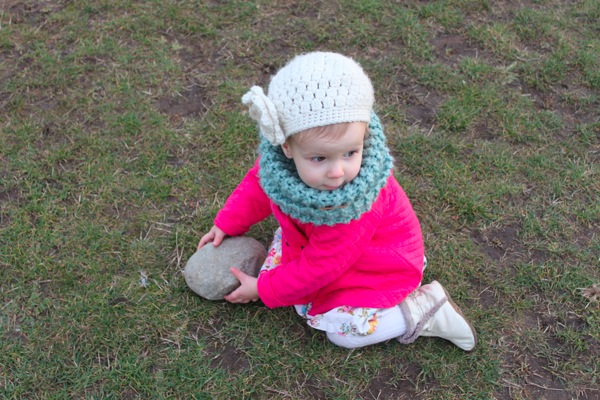 On the way home, she tried her hand at collecting rocks.  Lucky for me, these ones were a little too big to take with us…  Next time, Grae.  Next time. 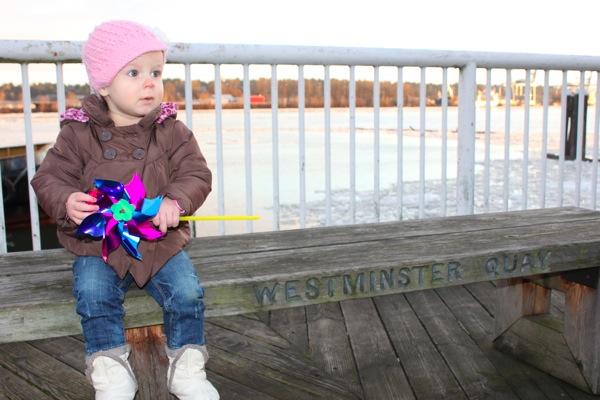 Today we headed out to New Westminster to check out the Royal City Kids Fair.  Although the fair wasn’t great, the Quay did not disappoint. 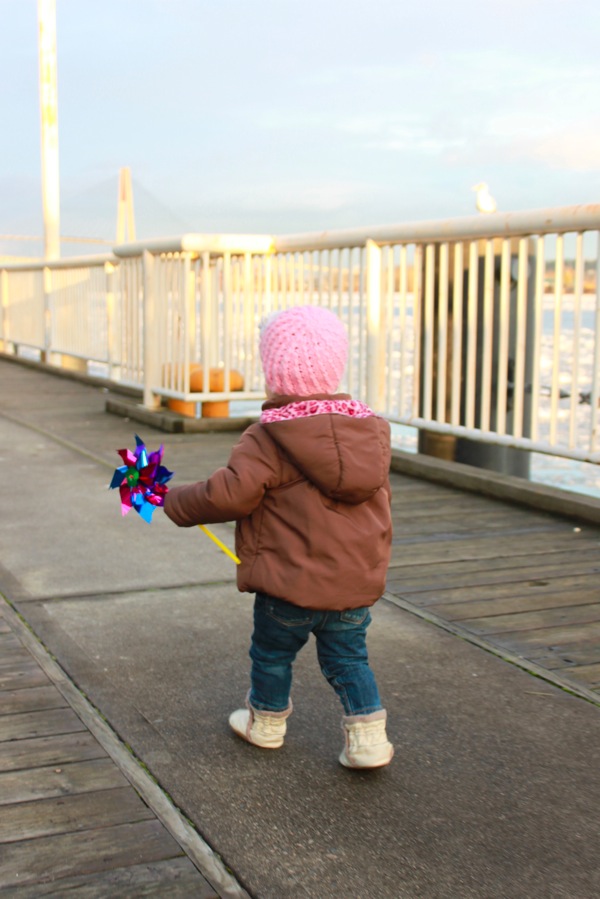 The boardwalk was beautiful!  We walked up and down the walk, greeting people and puppies along the way. Grae loved watching her pinwheel twirl in the wind. 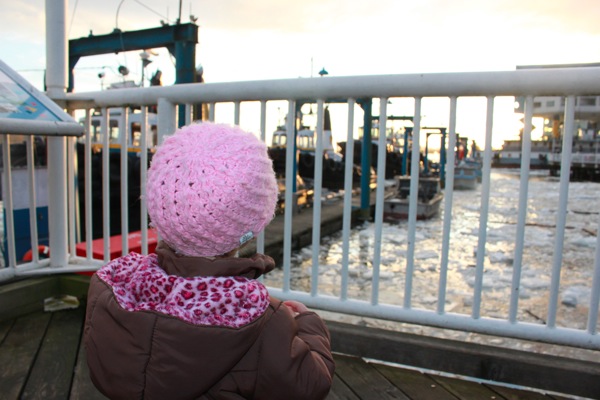 We stopped every now and then to pop in the markets, watch the birds fish from chunks of ice, and watch the tugboats come and go. 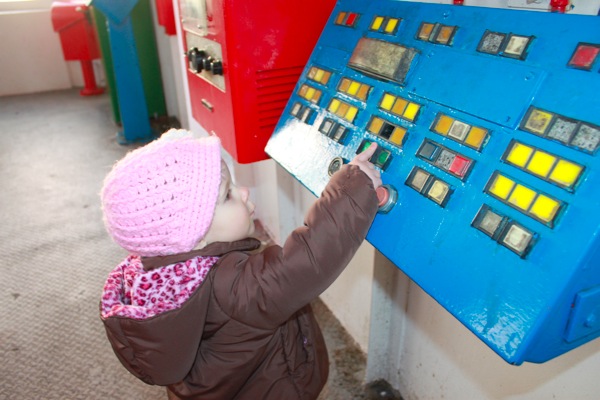 One of the highlights was definitely this boat playground.  Unfortunately, I didn’t get a shot from the outside, but it is basically an old boat that’s been anchored into the boardwalk and converted to a children’s play area. 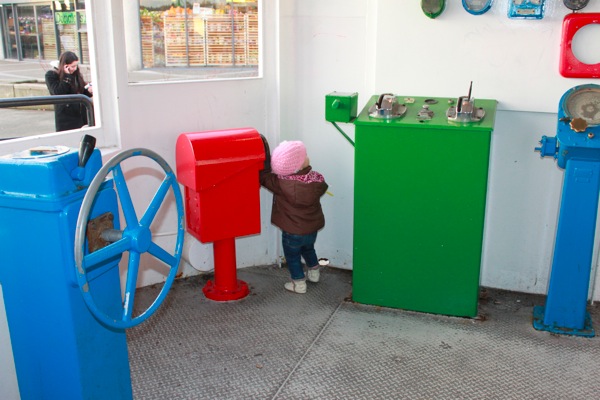 Gracen loved it.  We’ll definitely have to bring Papa down here sometime soon. 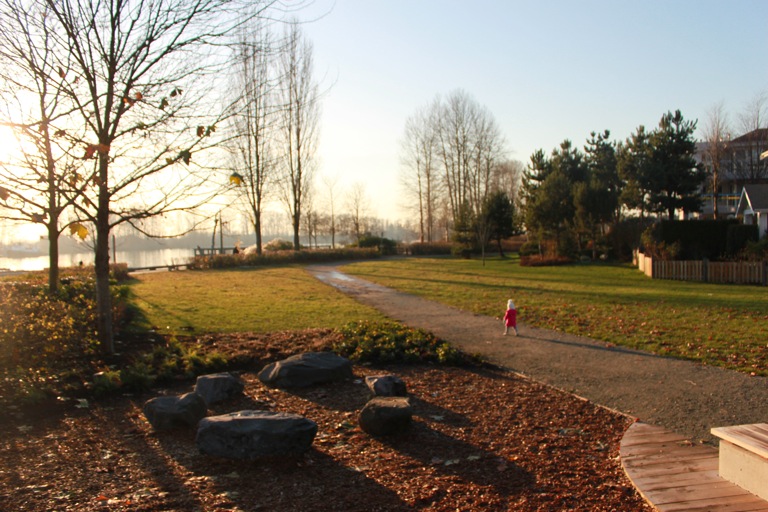 It’s beautiful, quiet, and there’s lots of space for little G to roam around.  One thing’s for sure – this little lady is not a scaredy cat.  She’ll bravely wander off without so much as a glance back.  As a little experiment, we decided to hang back and see how far she’d go before turning around and realizing we were not right there beside her, but that never happened.  She just kept on cruising away from us without a care in the world (terrifying, I know)… 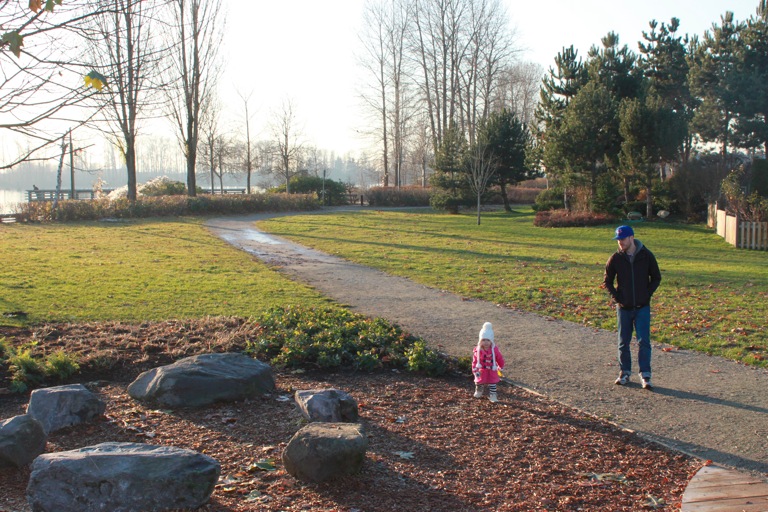 Eventually, Papa had to go, rein her back in, and direct her attention to the little playground she coasted right by. 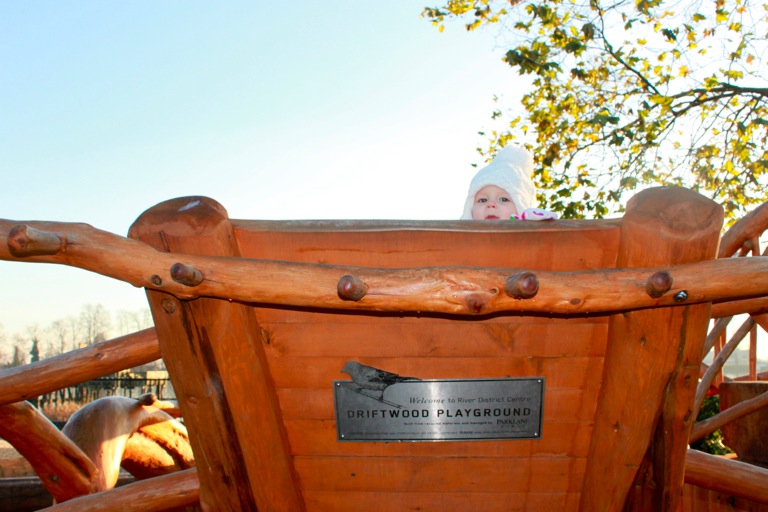 This playground is very unique in that it’s made of almost solely local driftwood. 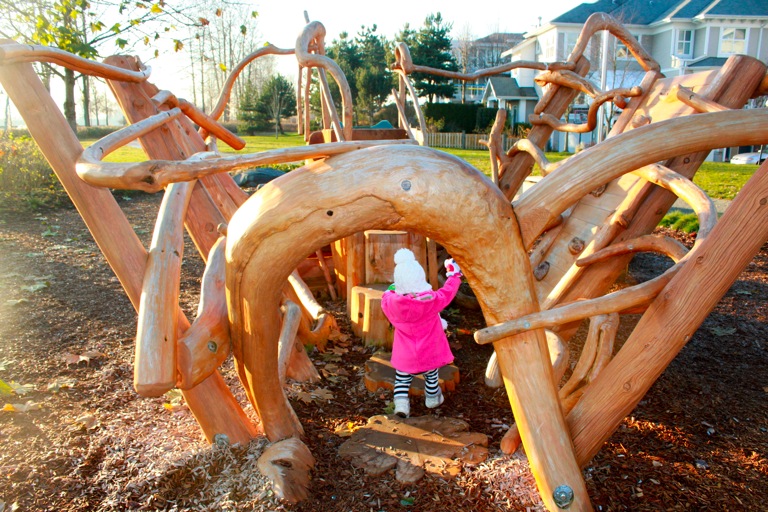 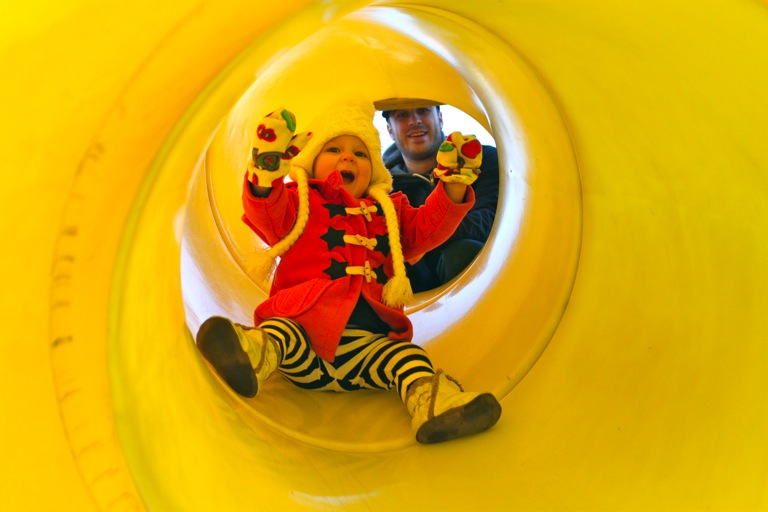 After getting our fill on the driftwood playground, we walked along the riverfront until we reached the next playground.  Gracen loved this tube slide, and somehow she and Papa convinced me to go down the slide with her despite the fact that I could come nowhere near to sitting up inside.  There are some photos of the incident, but let me tell you – they aren’t pretty.  Rest assured that I’m doing you a favour by not posting them.  :)