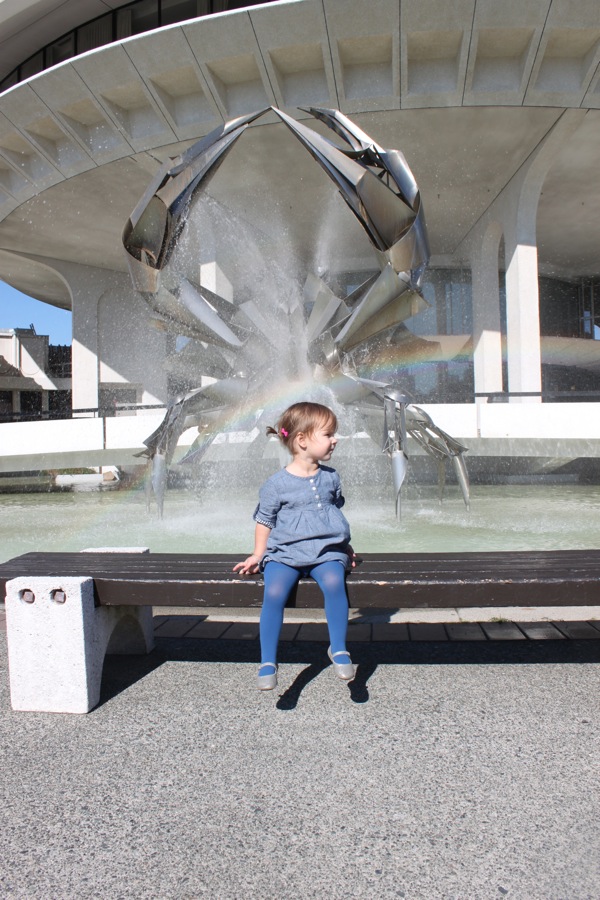 Miss G, in front of the HR MacMillan Space Centre / Museum of Vancouver, after her very first day of being taken care of by someone other than Mama or Papa

Because we lived overseas for Gracen’s first year and we’ve lived here in Vancouver, five hours away from her closest grandparent, for her second year, Grae hasn’t really ever been taken care of by anyone but Brad or I.  We have snuck out a total of FOUR evenings after she’s gone to bed thanks to the Grandmas and Uncle Brett, and she used to spend about 30 – 45 minutes at a time with our lovely nanny and housekeeper, Amita, when we were living in Kuwait and I had to leave for tutoring before Brad’s bus returned to the Dunes, but I don’t really count those…  She was so young when she stayed with Amita, plus it was such short periods of time.  And because she was already asleep, she didn’t know we’d even left the house on our evenings out.

But that all changed today.

Last week, I won a free ticket to Leading Moms: Inspiring Talks by Extraordinary Women on fellow Top 30 Mom Blogger Lisa’s blog, The Sprog.  When I first heard about it, I had really wanted to go. They were even offering free onsite childcare by Nannies on Call – but with tickets being $100 and us having a couple of weekends away planned for October, I had decided to skip it this time around.  Needless to say, I was thrilled to find out I had won the giveaway and even more excited when I learned that there was still space for Grae in the childcare room.

Despite my excitement, I must admit that I was a little bit nervous to leave Grae at the same time… I really liked the idea that she would be right there in the same building as I was and that she would be taken care of by professional, caring nannies, but I worried about how she’d react to me leaving her there and how she’d be about going to the bathroom.  Questions that crossed my mind: Is she going to bawl when I say goodbye? Will she know who to tell when she has to go to the bathroom? If she does know, will she be brave enough to go up to one of the nannies and actually tell them? How will she do without having a nap? (I hope I’m not the only mom who thinks about these things the first time they leave their child…)

So yesterday afternoon, we began talking about our special day ahead.  I explained that we would be going to a special place where there would be lots of mamas and lots of kids, and that I would be visiting with the mamas and she would get to be with all of the kids to play.  We filled her new backpack with extra clothes and her family and friends photo book, and her new bento box with a yummy lunch and lots of easy to eat snacks, making sure everything was labelled along the way.  Bright and early this morning, we talked some more about what a fun day it would be for both of us.  I explained that there would be some ladies taking care of all of the kids and that they were like mamas – they would be the ones she could go to if she needed help or needed to go to the potty.

We arrived to the space centre nice and early, took our time registering and looking around, made sure to get in a good bathroom break, and went to meet the nannies in the childcare room.  They were all very nice and Grae seemed happy to stay with them when I told that I loved her and that I’d be back later to pick her up.  As I went to walk out the door, however, panic set in a little bit and she decided that she wanted to “clum wif Mama and Mama’s friends”, but the nannies were great, swooped in, and invited her to go and colour with them.  With that, she said goodbye and was off.

The morning was lovely.  I finally got a chance to reconnect with a bunch of the other Top 30 Bloggers in person again, we enjoyed a lovely breakfast by Nature’s Path, and spent a couple of hours listening to the stories of several very inspirational moms.  At lunchtime, I poked my nose into the childcare room to check on my little miss.  She was doing just fine, having fun, and had already been to the potty twice, so I left unnoticed to join the other ladies for some lunch in the sun.

At the end of the day, after soaking in the tales and talents of several more influential mamas, I {quickly} made my way to the childcare room to scoop up my little lady.  I opened the door, and there she was, in the middle of the floor, rolling around and giggling.  Her ponies were disheveled, her lunchbox was empty,  she was in the same outfit I dropped her off in, and most importantly, she was happy…  A total success in my mind.  She was full of wild energy (a telltale sign of tiredness), but that was to be expected.  On the way home, I thought for sure she’d fall asleep, but instead, she told me {bits and pieces of } things that happened during her day – “Man and puppy upstairs”, “Laid on mamas’ laps at show” (they went upstairs to the planetarium to take in a show about seasons), “Played with yittle friends”….

It was a truly wonderful day.  I left feeling refreshed, inspired, and thankful that I now know, without a doubt, that Grae can be fully content when cared for by someone other than myself. And at the same time, very grateful that she doesn’t have to be. Knowing the stories behind the bits and pieces of her days means the world to me.