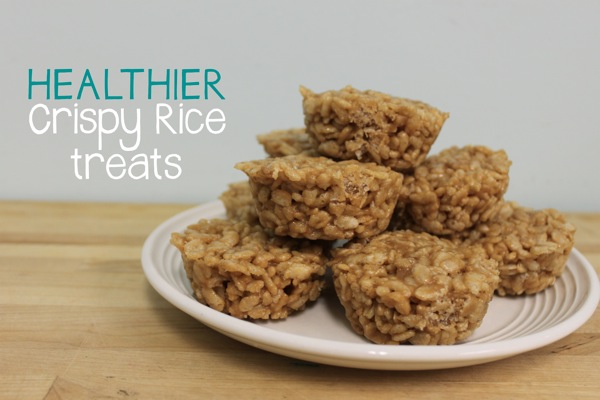 I don’t know why, but lately I’ve had a real hankering for Rice Krispie treats…  Of course I could have easily whipped up the classic butter and marshmallow version I grew up with, but number one, I wouldn’t feel good about letting Miss G try one (which is slowly becoming the determining factor of whether or not any of us should eat particular foods), and number two, have you ever read the ingredient list on the side of a bag of marshmallows?!  It’s not good.

So today Miss G and I set off on a little mission to create our own healthier version. 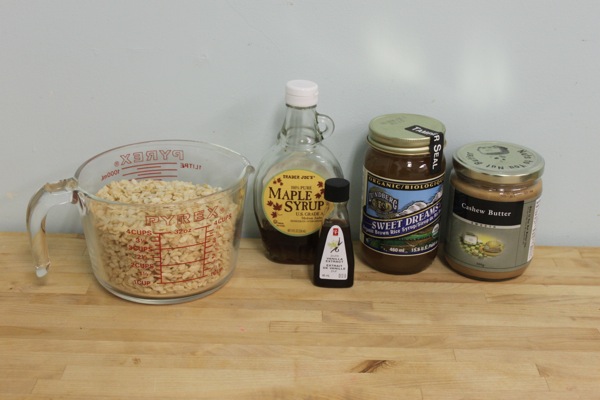 To be honest, I really had no idea if it was going to work.  My thought process went something like this… Hmmm… I guess I could replace the butter with a nut butter (still lots of fat, but good fat with some added nutrition mixed in). Then I could replace the marshmallows with a more natural sticky sweetener (Maybe maple syrup? Honey? Brown rice syrup?) And the regular Rice Krispies cereal could easily be swapped for a sugar-free crisp brown rice cereal.  It at least sounds like an okay plan, right?

In the end, I decided to go with cashew butter… It’s light, has a mild flavour {that is almost mallowy}, and is super creamy.  As for my sweetener, after a bit of online research, I decided to go with this brown rice syrup.  I haven’t used brown rice syrup a whole lot in the past, but that’s only because I hadn’t yet done my research.  What I found out is that brown rice syrup is a natural sweetener produced by fermenting cooked rice and treating it with natural enzymes from sprouted barley.  It’s about half as sweet as sugar, has a mild flavour, and is thick and syrupy (somewhere between pure maple syrup and a good honey).  The benefits are that it has a low glycemic value, and it’s a good source of minerals and minor nutrients.  Sold.  In order to add just a touch of sweetness, we added a little bit of pure maple syrup, and pure vanilla is a must in almost all baking projects in our house.

So there you have it – crisp brown rice cereal, brown rice syrup, cashew butter, pure maple syrup, and pure vanilla – and all were available in our nearby {regular} grocery store. 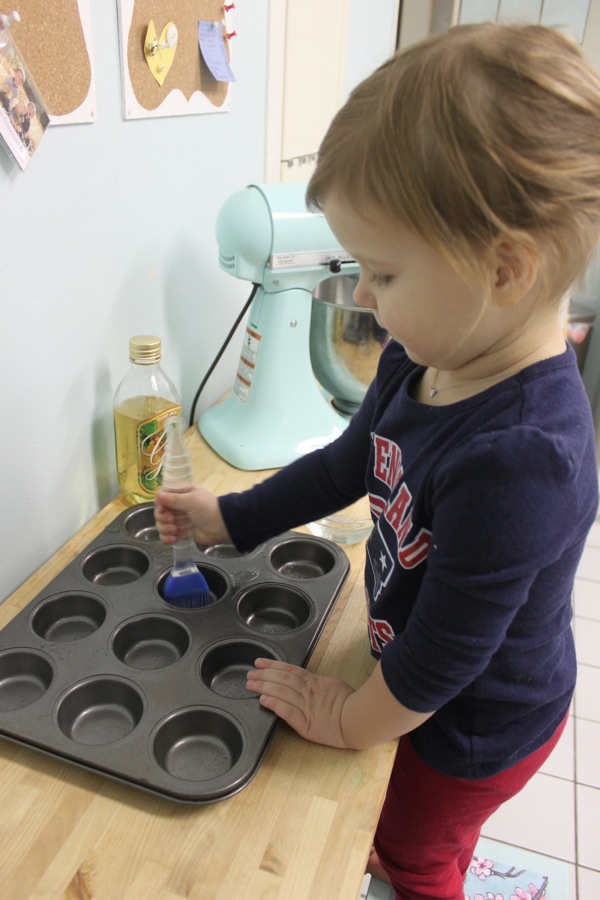 Just for fun, we decided to make our treats in individual portions using a muffin tin, so Grae prepared the tray ahead of time by lightly brushing on some grapeseed oil. 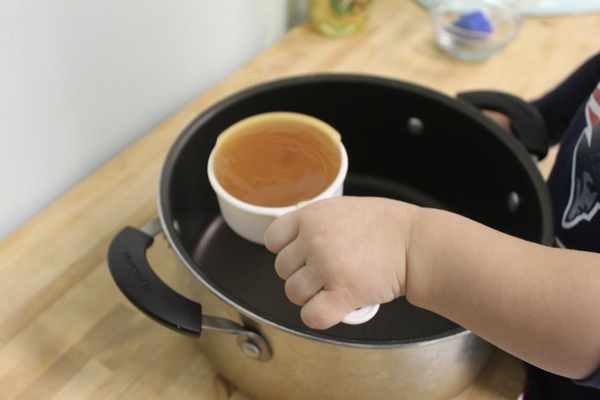 Now for the actual cooking part…  First, we put our brown rice syrup to a large pot… 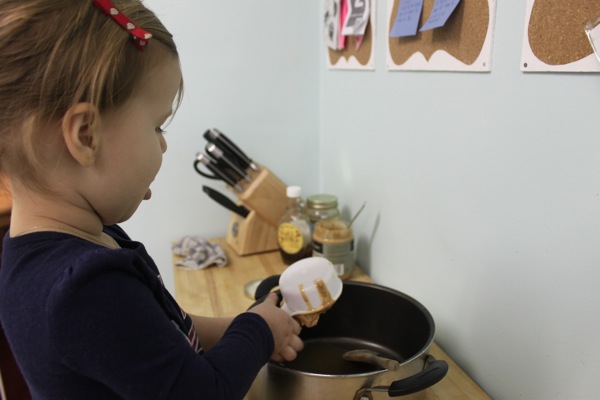 Then we added our cashew butter… 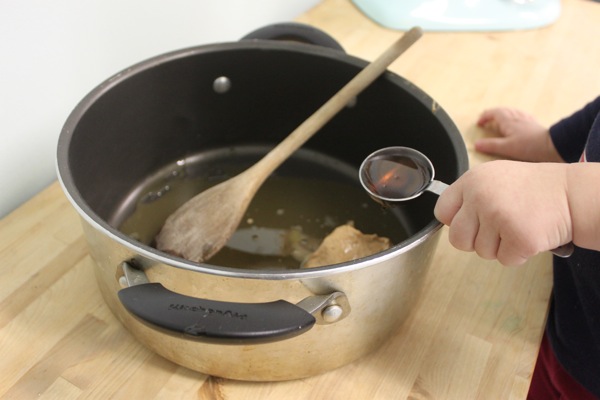 And a little bit of pure maple syrup for sweetness. 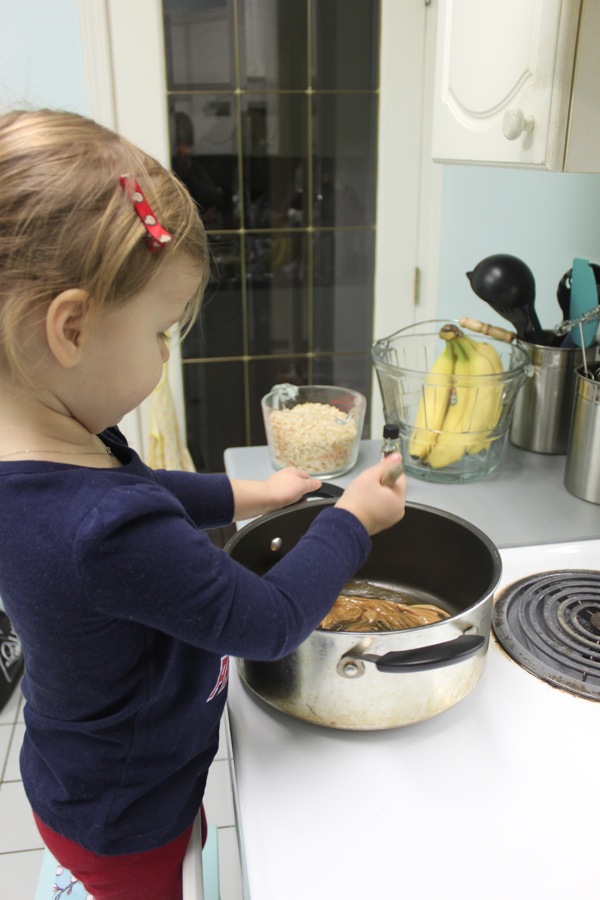 Then we transferred the pot over to the stove and stirred the mixture over medium heat until it was hot and liquidy, but not bubbling. 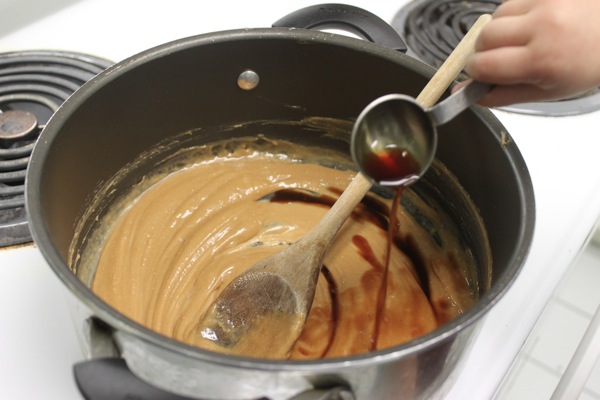 Next, we added a good amount of vanilla, gave the mixture another quick stir, and removed it from the heat. 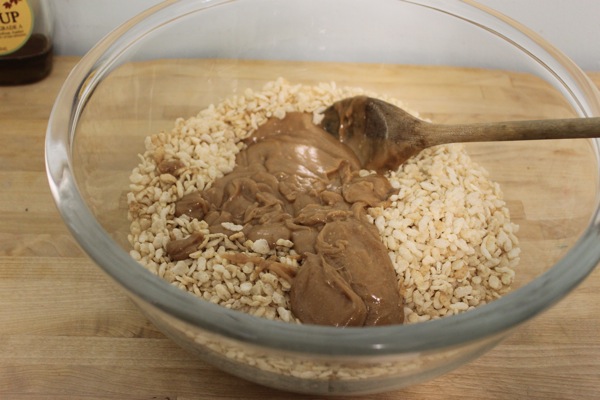 While you could just as easily dump your cereal into the pot and dirty one less dish, we opted for dumping our cereal into a large bowl and pouring the mixture on top so Miss G wouldn’t have to worry about the hot pot during the mixing process. 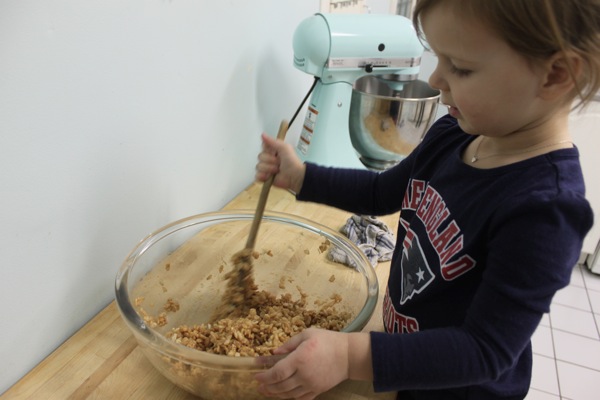 Then we mixed everything up until the cereal was evenly coated with the gooey mixture. 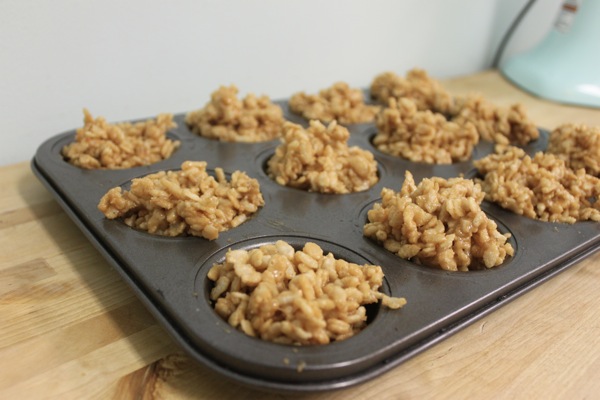 Working quickly, I filled each cup with a heaping scoop of crisp rice mixture. 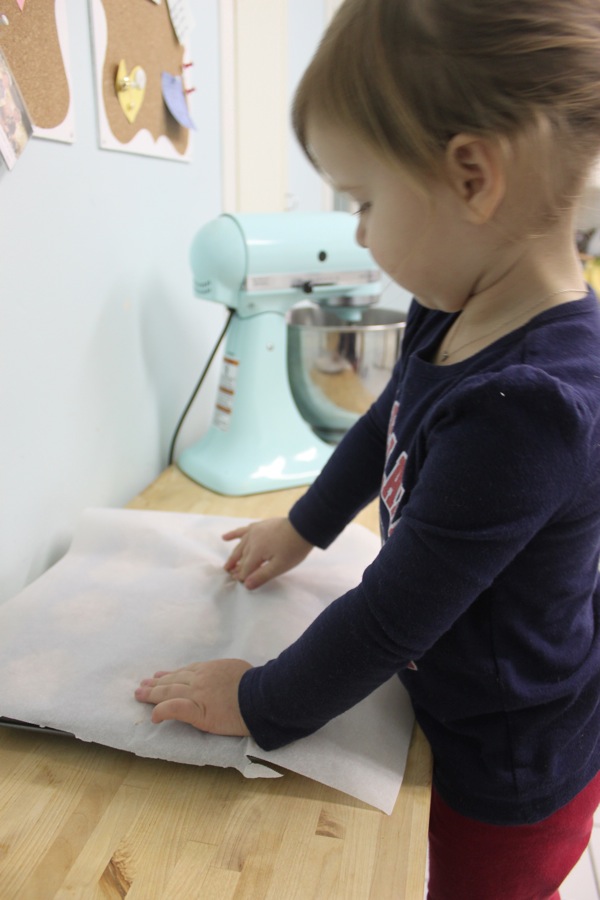 Then we placed a large sheet of parchment paper on top and pushed the mixture down firmly into the cups. 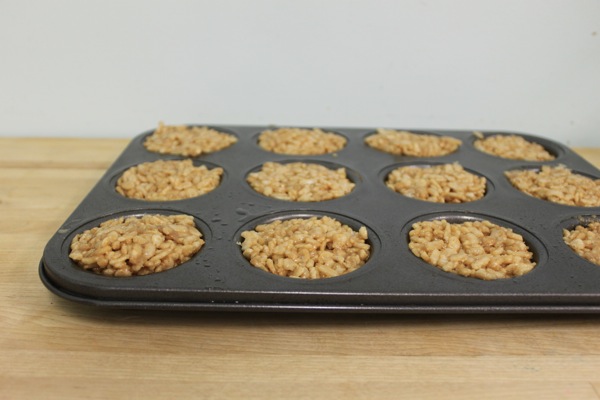 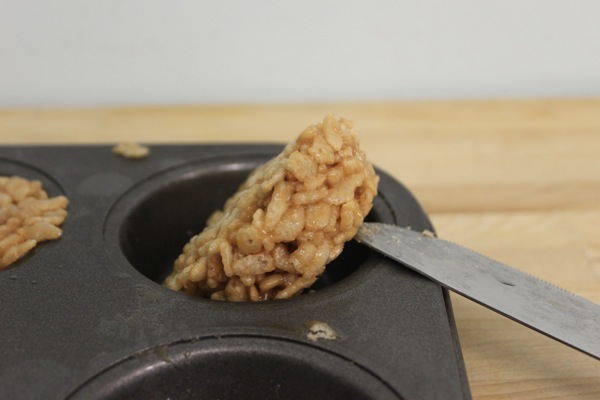 After a little bit of time in the freezer, I used a butter knife to pop out our treats. 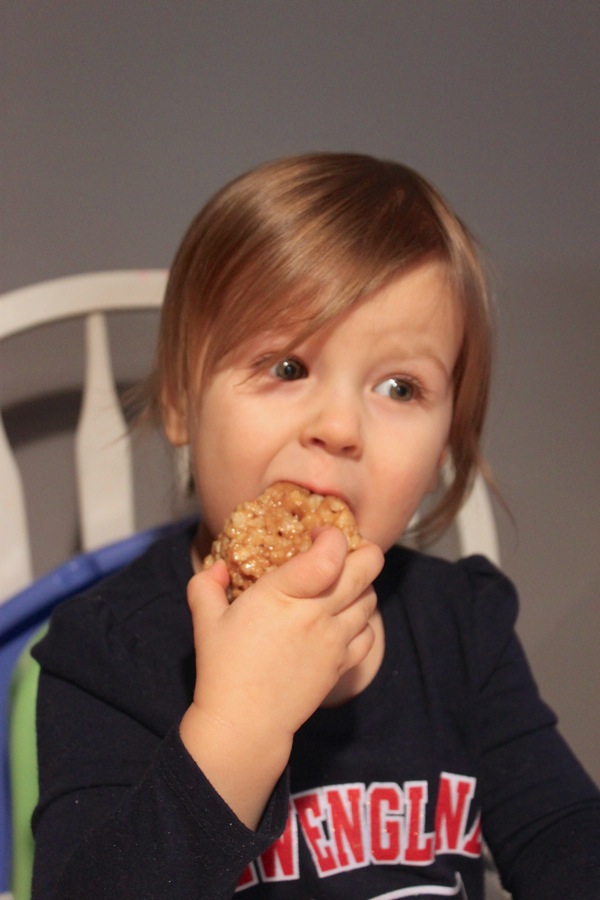 The verdict on Miss G’s first ever crispy rice treat?  She LOVED it. 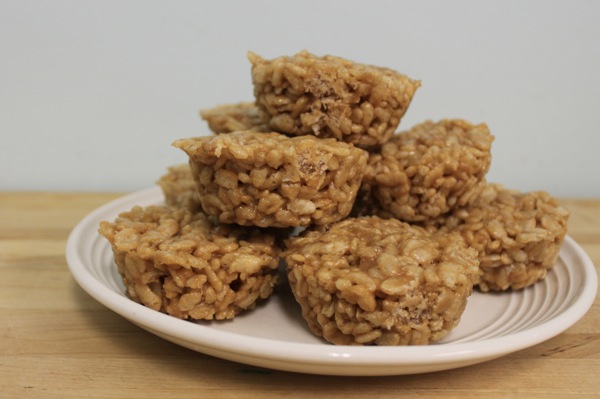 We all loved them in fact.  They’re soft and gooey just like regular Rice Krispie treats, with a similar flavour that is just slightly more caramely.

The true determining factor of success?  Brad {my sometimes picky husband who doesn’t always love the ‘weird food’ G and I cook} announcing that he likes them just as much as the classic variety, only to later decide that he thinks he likes them more.  Score. ☺

Measure the brown rice syrup, nut butter, and maple syrup into a large pot.  Warm over medium heat, stirring almost constantly.  When the mixture is hot and liquidy (but not bubbling), add the vanilla, give it another quick stir, and remove the pot from the heat.

Add in the crispy rice cereal and mix well to ensure the cereal is evenly coated with the sticky mixture.

Dump the mixture into a parchment-lined baking pan or scoop into a greased muffin cups and press it down firmly.  Pop the pan into the freezer for about 15 minutes to allow the treats to set.