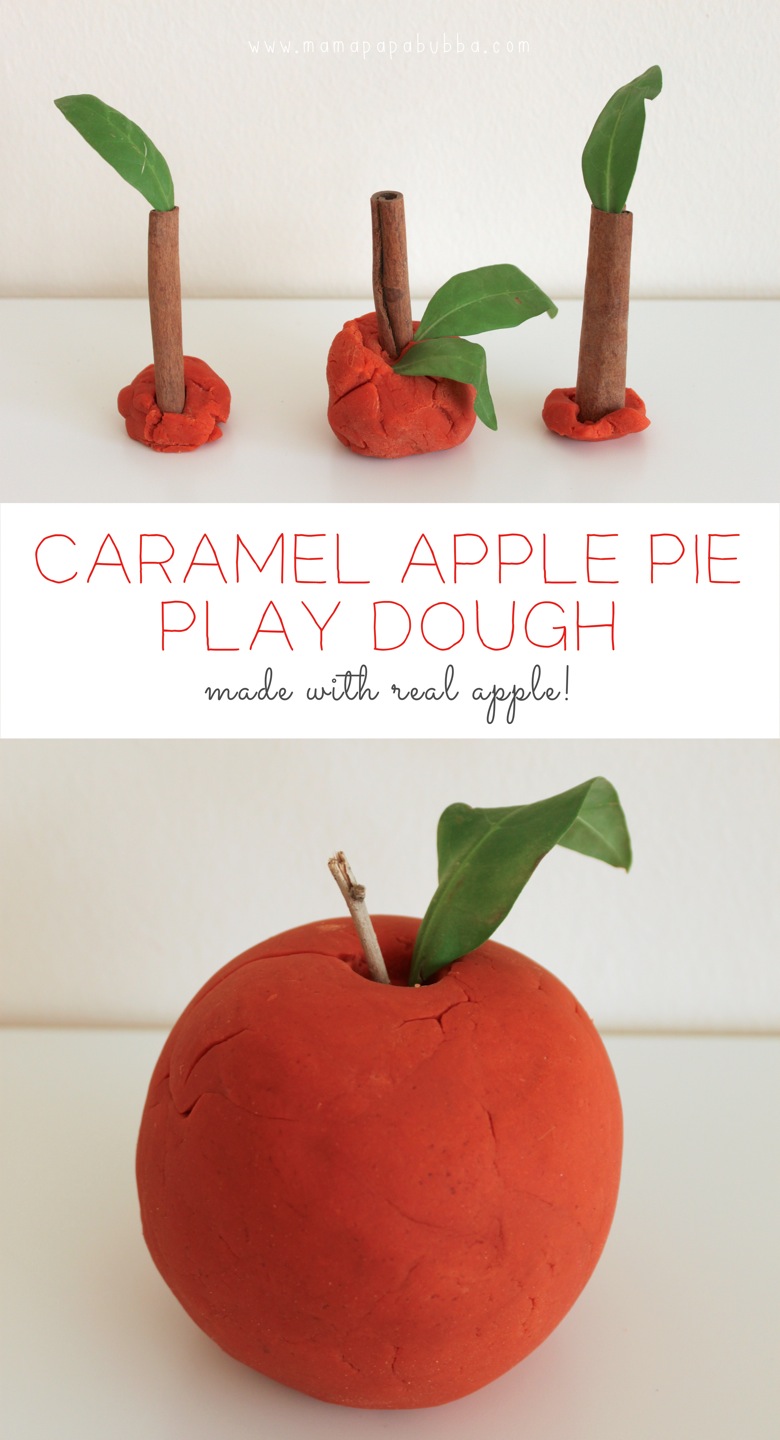 One day, while playing with our well-loved pumpkin spice play dough, Gracen asked if we could have some friends over so she could share her new dough with them.  She’s always adored having friends come over, and now that we’re in an apartment building filled with teaching families, arranging play dates is easier than ever.  A play dough play date sounded like a brilliant plan to me, so I agreed and immediately started thinking about another fall-scented play dough we could create.  I quickly remembered the apple play dough post I’d seen on Fantastic Fun & Learning, and knew that Miss G and her friends would enjoy something similar.  Because I was on a bit of a roll with the dough containing real pumpkin, I decided our apple dough would contain real apples and would be further fall-ified by making it apple pie scented.  The good news is that my mission was a total success!  The dough turned out soft, squishy, and smelled deliciously of warm apple pie drizzled with caramel sauce – yum!  In fact, as I was making it, Brad came into the kitchen with eager eyes and asked what I was baking because our house smelled so delicious.  Oops. 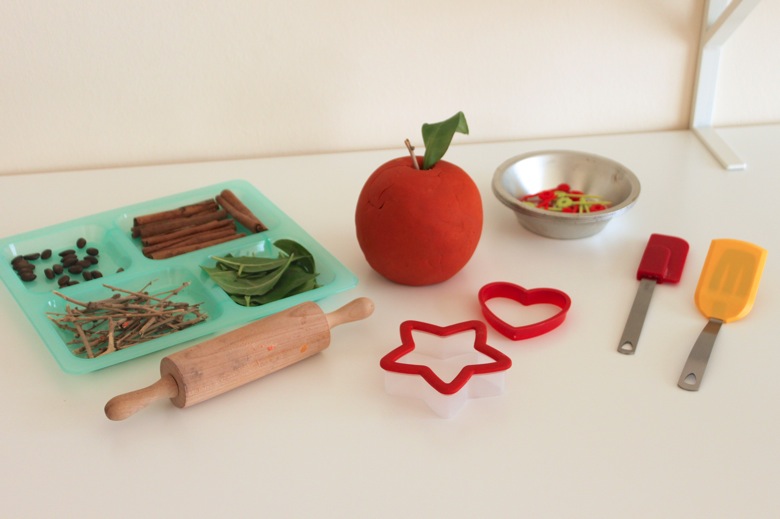 Our play dough play date was a hit with both Grae and her little friends, and today I set the apple pie play dough out once again for her to enjoy before lunchtime.  Included in the play invitation were  some decorating goodies I rounded up around the apartment {and the complex} and some simple kitchen tools – a miniature rolling pin, spatula, flipper, and pie plates, a couple of cookie cutters Miss G selected from our collections, and some red and green food picks. 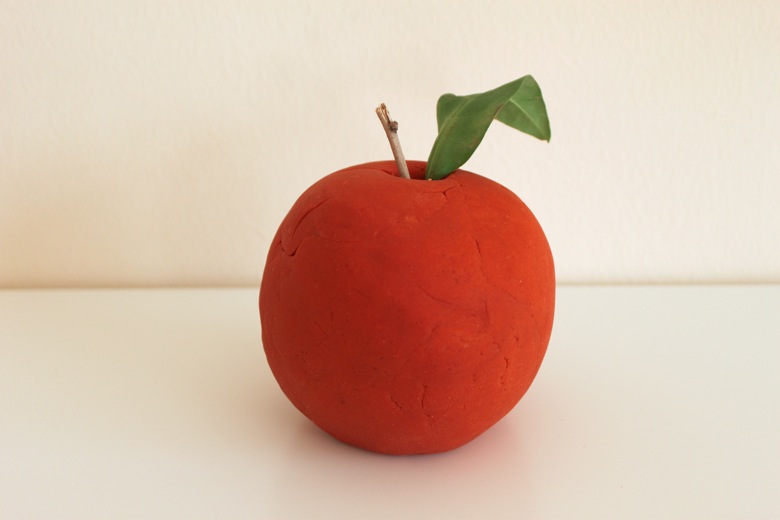 As I did last time, I shaped the play dough as an apple just for fun.  Grae always seems to really enjoy this extra little touch and has a good giggle over the fact that I’ve shaped our dough as a giant piece of fruit. 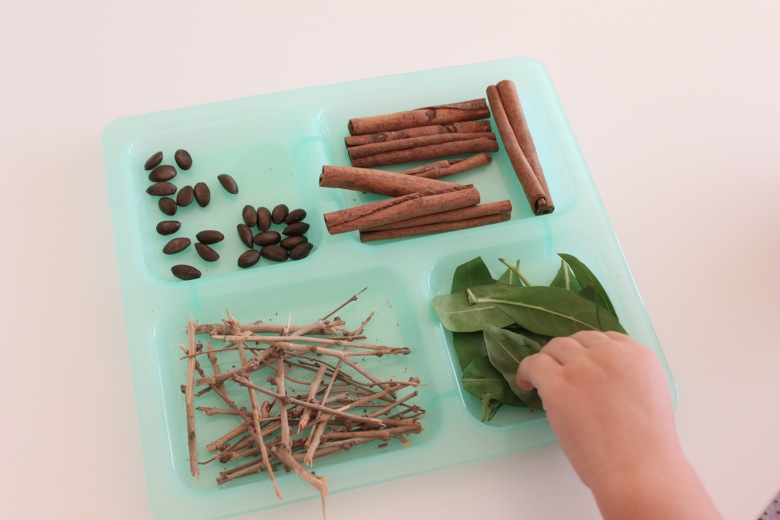 Today’s decoration selection included some small twigs, leaves I managed to round up outside, some seeds from a custard apple (apple seeds, watermelon seeds, dry black beans, or dry kidney beans would work well too), and some cinnamon sticks. 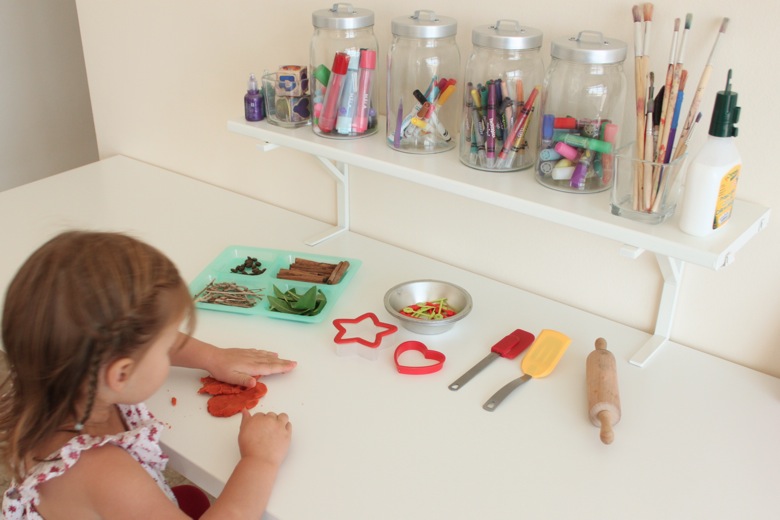 I was curious to see what Grae would do as she began playing…  Decorate the outside of the apple first as she did with the pumpkin, or tear into the dough and begin creating other things.  This time she ripped off a chunk and began preparing her dough for cookie making. 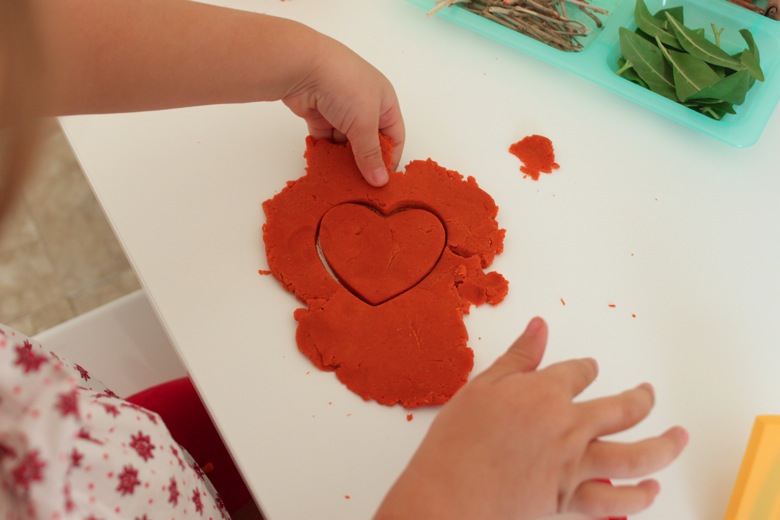 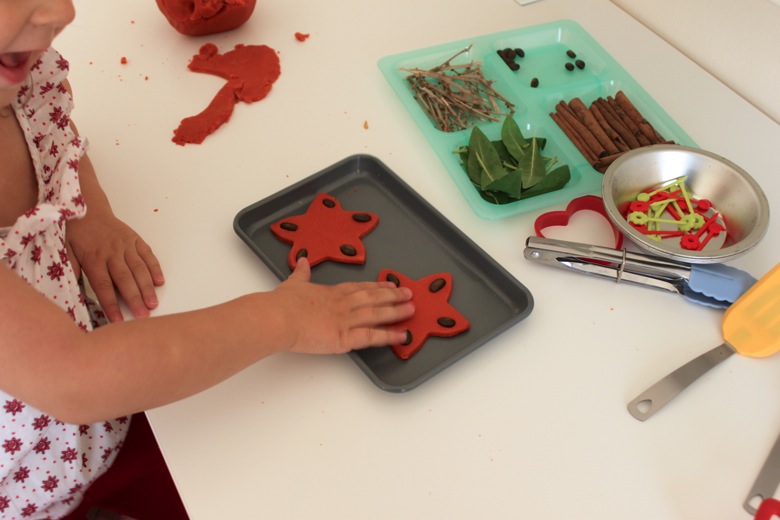 With several cookies cut, the decorating began.  She told me that it looks ‘soooo pretty’ when you place a seed on each of the star’s ‘pokey parts’. 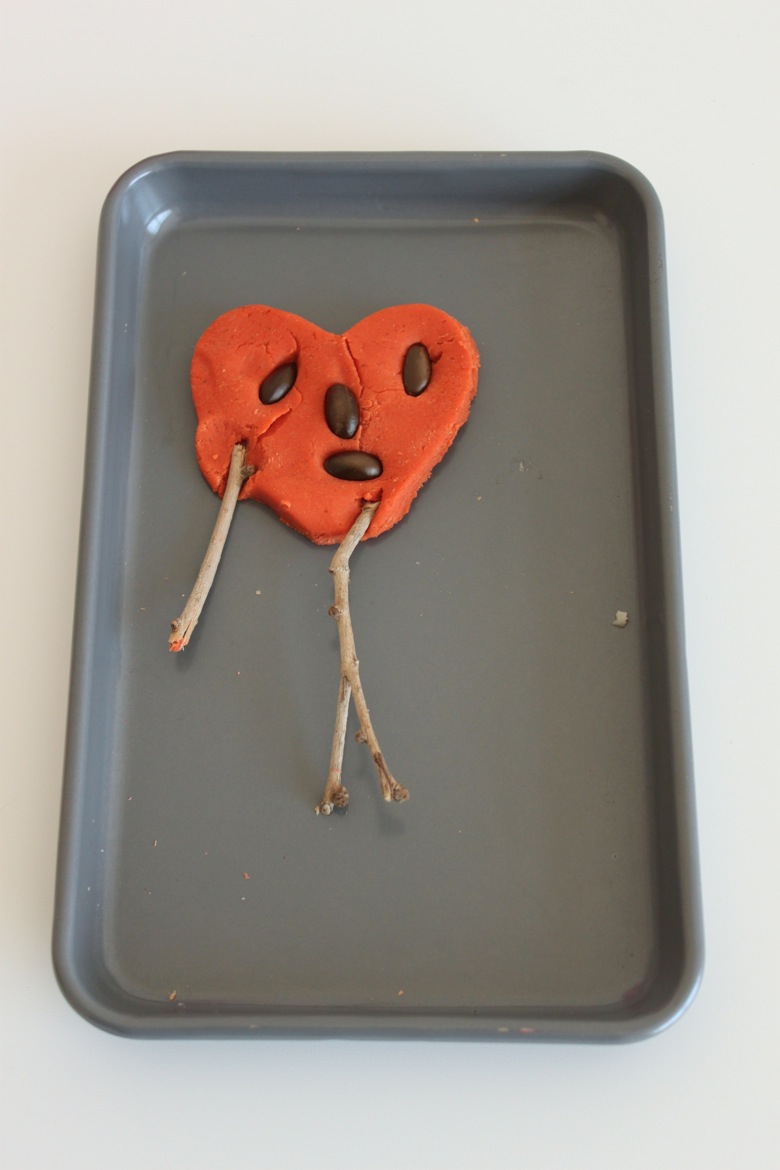 Next up came this hilarious little guy… A heart man complete with twig legs. 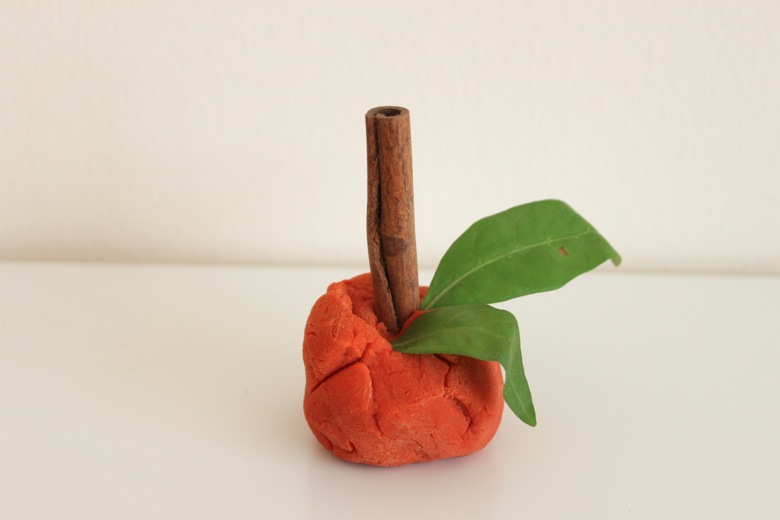 With her cookies complete, Grae began making apples.  First up was this cute little one with a cinnamon stick stem… 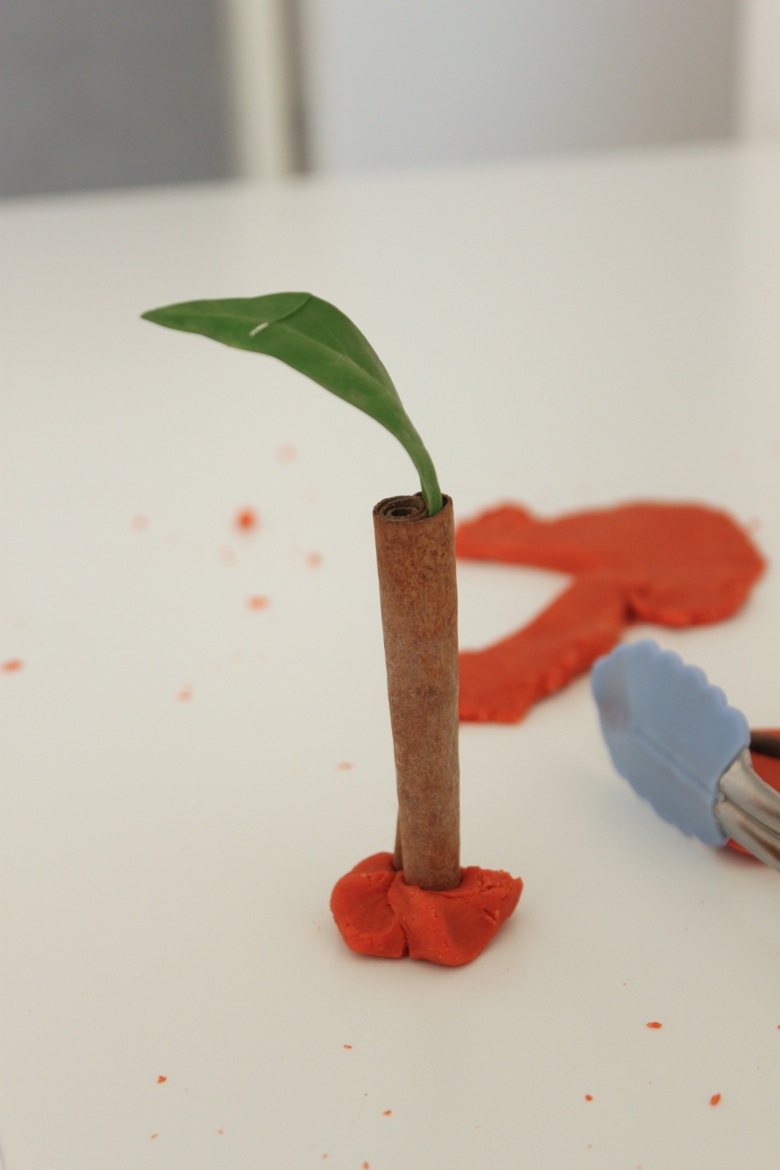 And then came several of these ‘mini, mini, MINI’ ones.  I don’t know what it is about them, but I just think they’re hilarious. 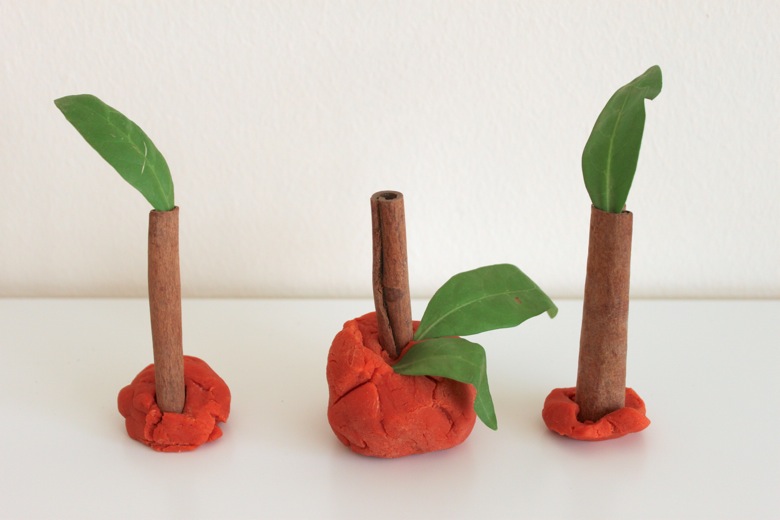 From what I can tell so far, our caramel apple pie scented play dough is going to be just as big of a hit with Miss G as our pumpkin spice version is.  And you know what?  As long as our house continues to smell like warm fall pies, I’m totally happy cleaning up a mess of play dough each day. ☺

Add first set of ingredients to a large pot and heat on the stove {stirring regularly} until just bubbling.  Remove from heat and add in dry ingredients.  Stir until combined and dump mixture out on the counter.  Allow to cool for 5 or 10 minutes.  Knead dough until soft and fully cooled (it may feel sticky in the beginning, but resist the urge to add flour – that stickiness vanished completely for us once the dough was no longer warm).  Store in an airtight bag or container when not in use.