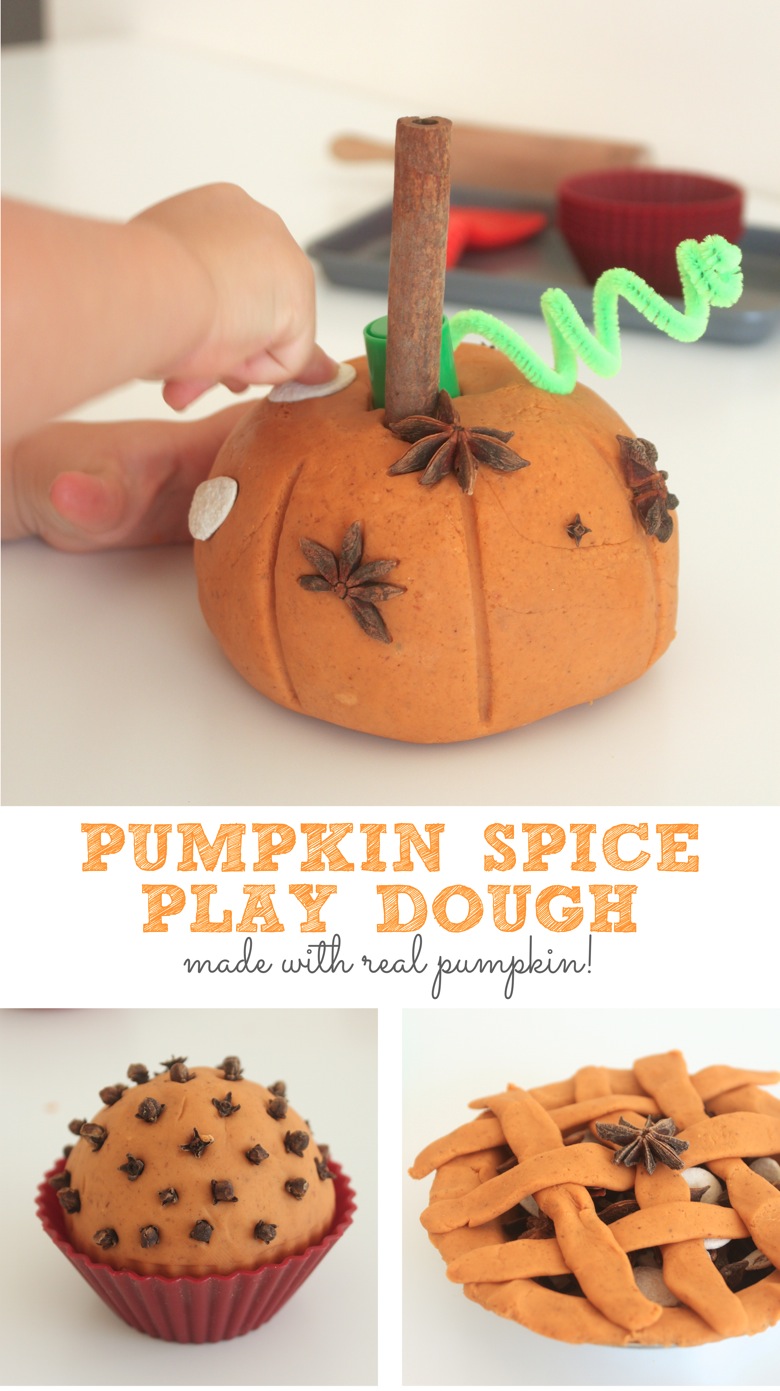 I adore fall.  The colours, the crisp air, the scarves, the boots, the crunch of leaves underneath your feet…  It all just makes me warm and fuzzy inside.  My social media feeds have been full of it recently, and for that I’m thankful (because hey – I’ll take it however I can get it).  While we may be in the desert and it may still be 40 to 45 degrees on an average day, there’s no reason why we can’t make fall happen right here in our own apartment.  And so we began today.

While grocery shopping this weekend, not only did I come across a miniature pumpkin, but I also stumbled upon a few cans of pumpkin pie mix – score!  Truthfully, I had hoped I’d find some pure pumpkin purée, but beggars can’t be choosers here in Kuwait.  You take what you can get, when you can get it, and you’re grateful you were able to find something remotely similar to what you were looking for in the first place. I headed home happy with my two pumpkin products and knew I wanted to use one of them to make Miss G some pumpkin play dough.  While I wasn’t able to find a recipe that included actual pumpkin online, I turned to our favourite ever no-cook play dough recipe, made some tweaks, and hoped for the best.  The results were absolutely awesome!  The play dough super soft and squishy, plus smells deliciously of fall (think homemade pumpkin pie baking in the oven). 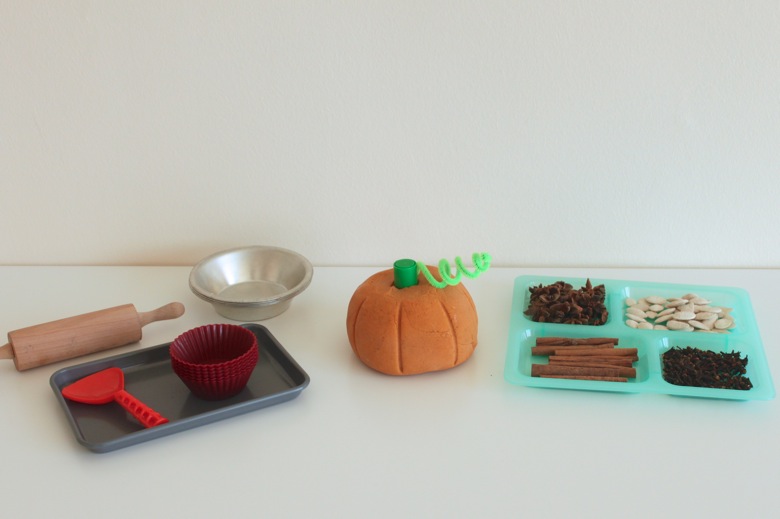 I’m a huge fan of setting up invitations to play / create, so last night before heading off to bed, I set this out at Gracen’s worktable… Some simple kitchen tools, a tray of goodies from the spice cupboard, and the play dough {which actually stayed in the fridge in an airtight bag until this morning}. 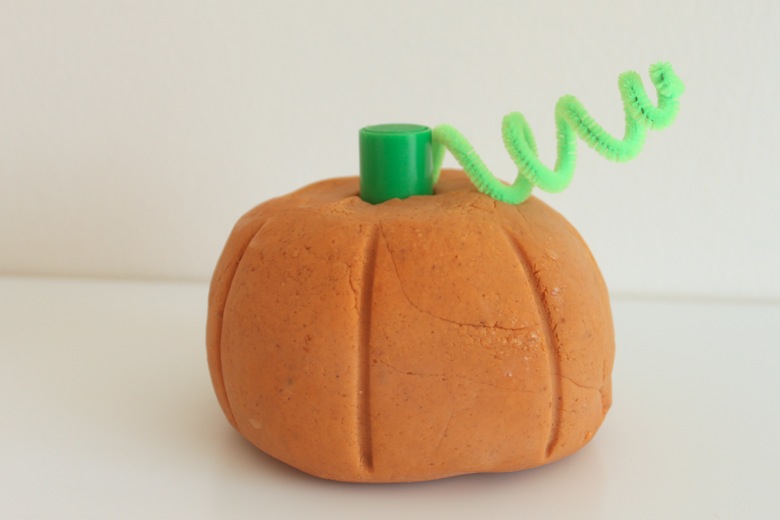 Just for fun, I decided to shape the play dough as a pumpkin before setting it out.  I used a plastic knife to make lines around the pumpkin’s surface, and then added a marker lid and a curled pipe cleaner to act as a stem and vine. 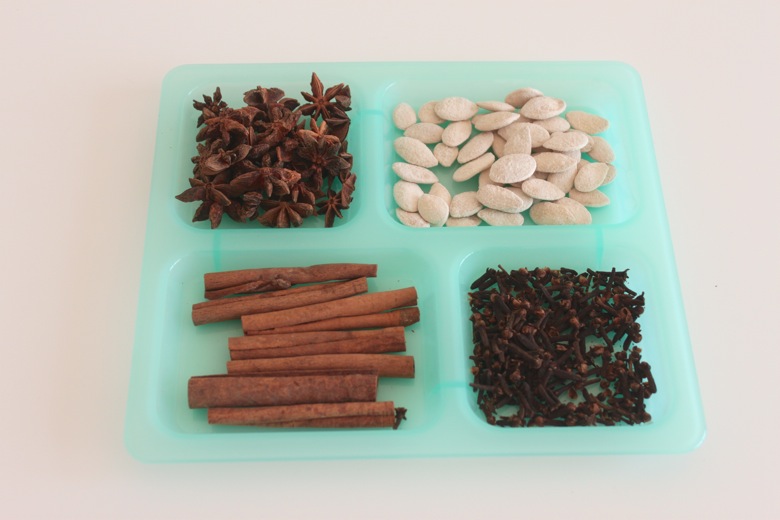 As for the decorating goodies, I decided that pumpkin seeds were pretty much a must, then added cinnamon sticks, whole cloves, and star anises {not because they’re particularly reminiscent of fall, but because they’re just so darn beautiful!} 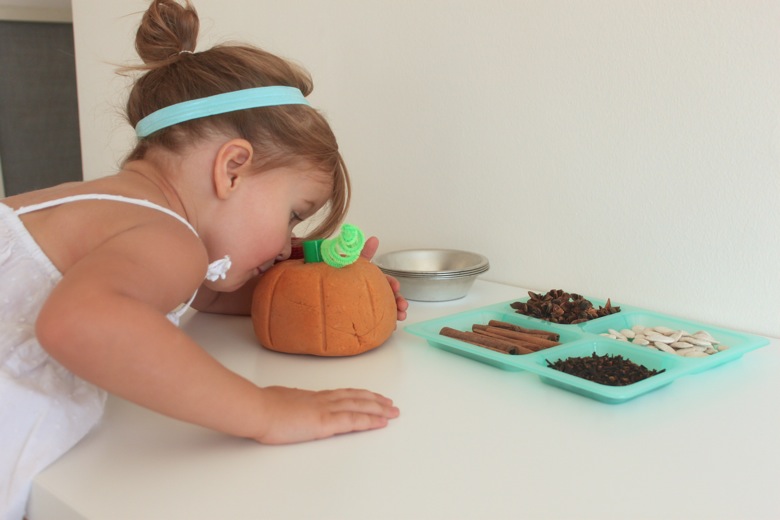 The moment we were done putting away our breakfast dishes this morning, Miss G jumped up at her table and began exploring.  It was obvious that the play dough’s  scent had caught her attention because the first thing she did was plant her nose into it. 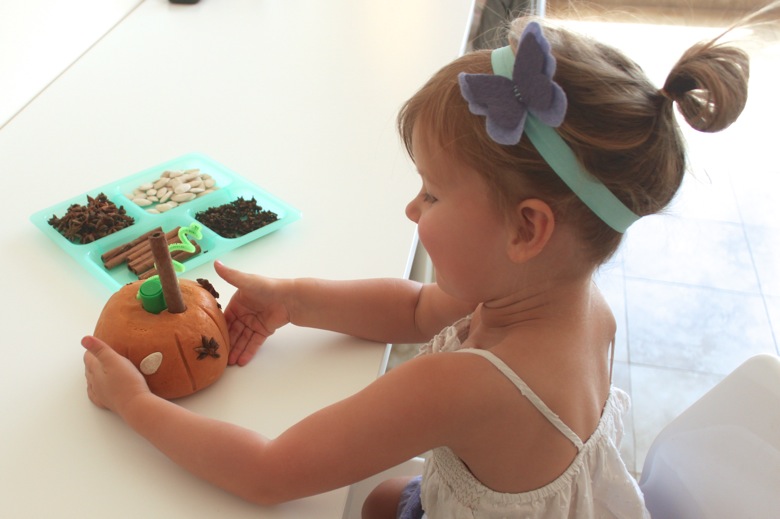 As I usually do, I simply invited her to play.  No expectations, no guidelines, no examples.  Truthfully, I thought she’d dig into the play dough pumpkin right away, but instead, she began decorating it. 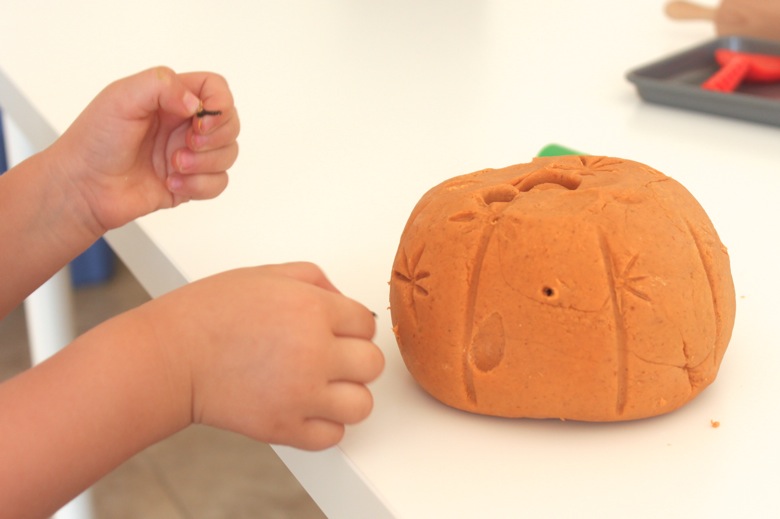 She added embellishments to the pumpkin’s surface for a good long while before deciding to dismantle things.  Not only was sorting all of the decorating goodies back into the tray fun, but she was delighted to see the imprints they’d left in the play dough. 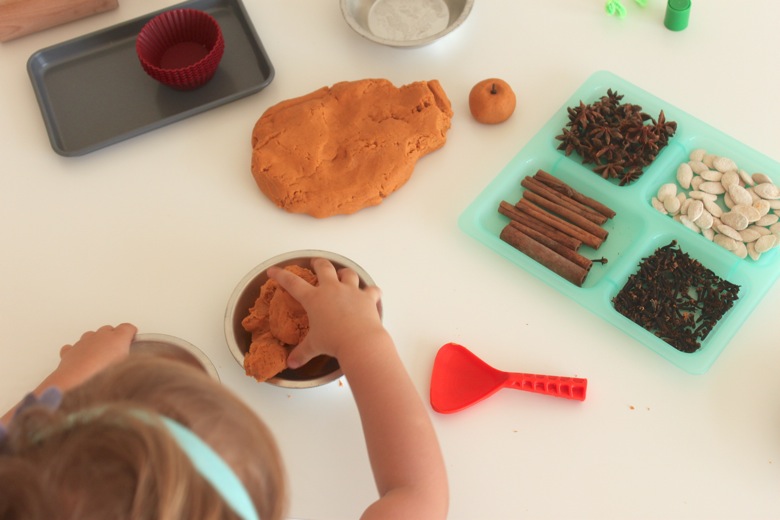 Next up she began smushing up her pumpkin… 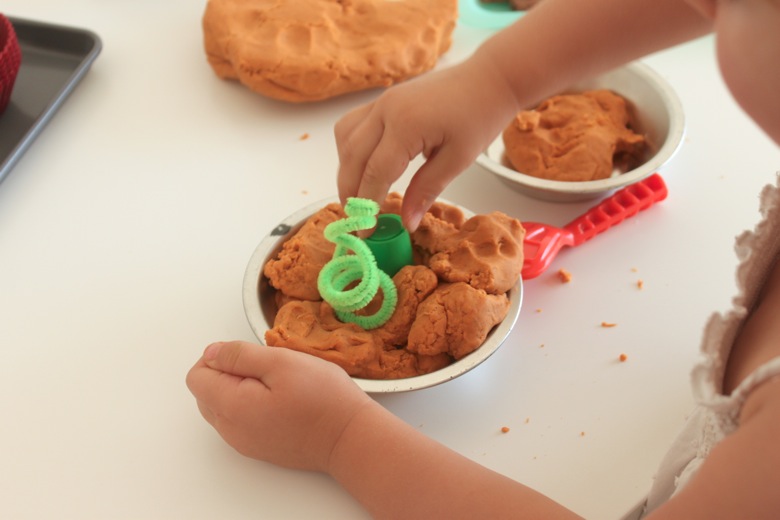 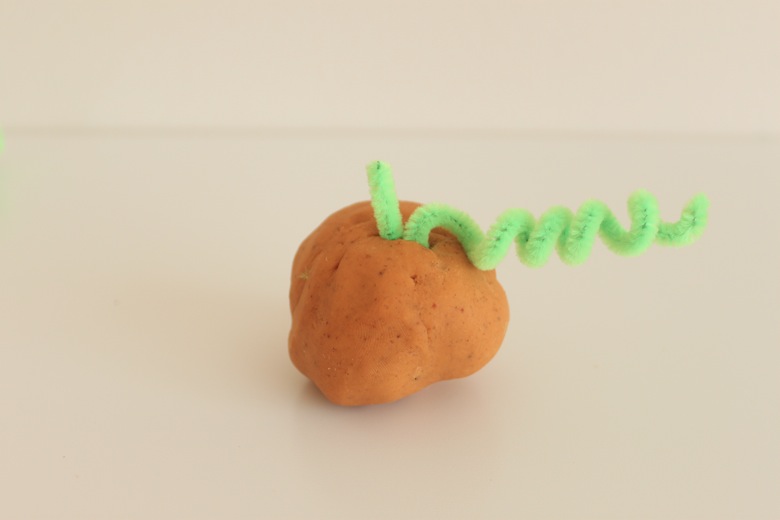 This sparked her next idea – mini pumpkins!  She requested more pipe cleaners and I cut them into two sizes – really tiny ones to act as stems, and slightly longer ones to be curled into vines.  Using the pipe cleaners and small balls of dough, she created all kinds of teeny tiny pumpkins. 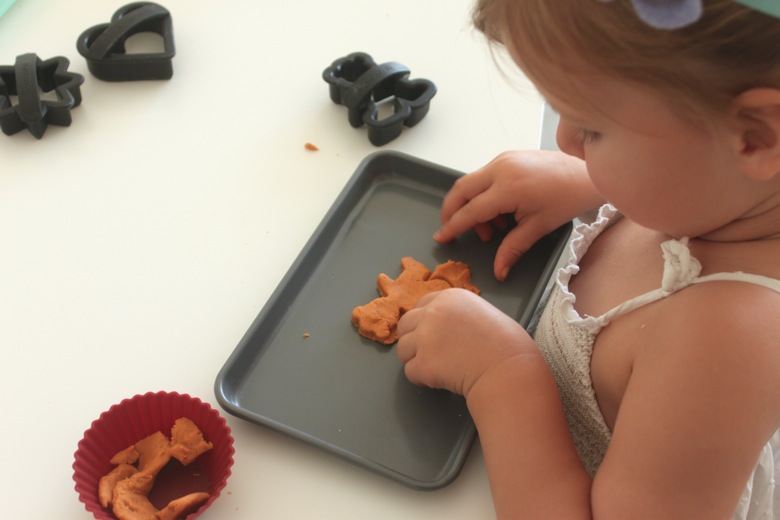 Over an hour of play in, Miss G turned to me with bright eyes and said, “I have an idea – COOKIE CUTTERS!!!”  She ran to the kitchen, retrieved 3 from the drawer, and began making pumpkin bears.  At one point, she had a whole teddy bear family, complete with a storyline, going on on her pan. 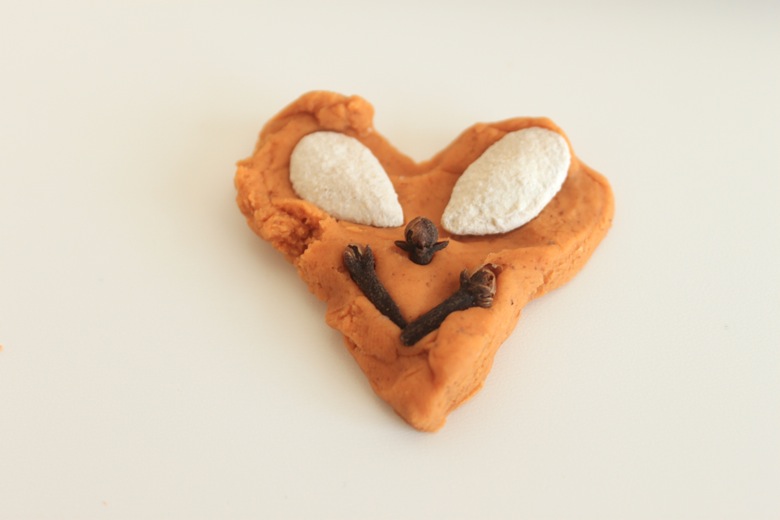 These little guys were funny too.  Using the spice cupboard goodies, she began making faces on her heart-shaped cookies and giving them names. 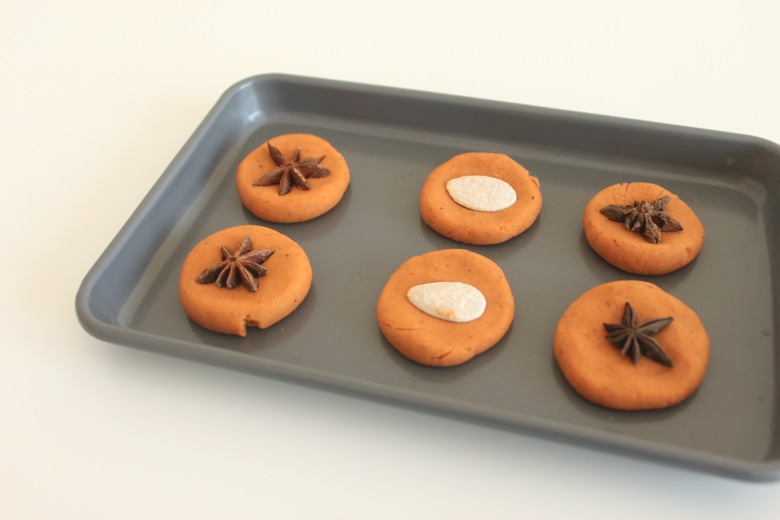 Without an ounce of exaggeration, this batch of pumpkin play dough kept Grae happily engaged for over 2 hours this morning and the only reason she stopped playing was because we had to clean up and get ready for lunch. The plan for this afternoon?  More pumpkin play dough play…  A sure sign of a successful new recipe, no?  The only thing I’m unsure of is how long this dough will last because of the pumpkin content. We’re keeping it in the fridge when it’s not in use and hoping for the best.

Add first set of ingredients to a large pot and heat on the stove {stirring regularly} until just bubbling.  Remove from heat and add in dry ingredients.  Stir until combined and dump mixture out on the counter.  Allow to cool for 5 or 10 minutes.  Knead dough until soft and fully cooled (it may feel sticky in the beginning, but resist the urge to add flour – that stickiness vanished completely for us once the dough was no longer warm).  Store in an airtight bag or container in the fridge when not in use.