Oh my word… I’m so glad we finally got around to trying this!  I pinned the idea over a year ago and I knew it was going to be fun, but I had no idea just how much Miss G would love it and how much play it would bring about (just wait until we get to those pictures!)

For our bubble foam, we used an eco-friendly dish soap (only because that’s what we use in our house – I’m sure the regularly variety would probably make even better, ‘stronger’ foam) and an assortment of gel and liquid food colouring (both worked well – we just used a little less of the gel because of its strength and a little more of the liquid).

While Amanda of Dirt and Boogers put both her blender and food processor to use when making her foam, we got out our supplies, and decided to try using our Kitchen Aid mixer instead.  I wanted to make a lot of foam, and I figured its big bowl would allow us to do so in fewer batches, and I figured that it would be able to whip the foam just as well as, if not better, than a food processor or blender (I also think a hand blender would work well too!)

To make our foam, Miss G added 2 tablespoons of dish washing liquid, 2/3 a cup of warm water, and 2 drops of gel food colouring (or 4 or 5 of liquid) to the machine’s bowl.  Then we fired up the mixer on its highest speed, and let it whip the mixture into foam for 2 solid minutes.  The result was this thick, luxurious foam that formed soft peaks when a spoon was lifted out of it.

We continued the process with 4 other colours of Gracen’s choosing, working quickly so that the foam would maintain its thick texture.

After completing all of the colours in about 10 minutes or so, you can see that the purple foam we made first was starting to ‘air up’, but Grae didn’t mind one bit.  She was just thrilled that it was time to dive in finally!

While I did consider bringing some items to use while playing in the bin (I thought maybe cups to hold foamy drinks or cars to put through a foamy carwash), I ended up skipping that part and I’m glad I did.  Sometimes less is more, and in this case, the foam was plenty of fun on its own.  Gracen immediately started swirling the colours together which made me wonder if next time we should try just 3 colours – red, blue, and yellow – to see how well a little colour mixing experiment would turn out.  Either way, swirling the rainbow colours together was brilliant fun.

With her hands and arms absolutely covered in foam, the clapping began…  And goodness gracious, did she ever find flying foam hilarious!

Next up, this silly slippery hands position took form…

And before long, a certain someone’s head was in the bin!

She popped up with hair full of foam, and I knew exactly what was happening next.

And who am I to deny this sort of crazy, messy, foamy fun really?

Fully covered in bubbles, Miss G told me that they felt ‘so soft and cozy on her bare skin’ and I don’t doubt it for a minute!  At this point I was sort of glad we’d used eco-friendly soap as her skin can sometimes be quite sensitive, which led me to wonder if the same sort of results could be reached with a baby shampoo, bath wash, or bubble bath instead?  Another experiment for another day, I guess. ☺  The good news is that this foam didn’t irritate her skin in the least, and they lasted for a ridiculously long time.

One thing I hadn’t thought of when we put together this sensory activity was the possibility of bubbles… And boy, oh boy, were there ever bubbles!  Big, giant, huge ones that formed in the space between her two legs and between her arms and her body each time she’d stand up.  (It’s hard to see, but there’s a giant one coming from in between her shins in this photo.) 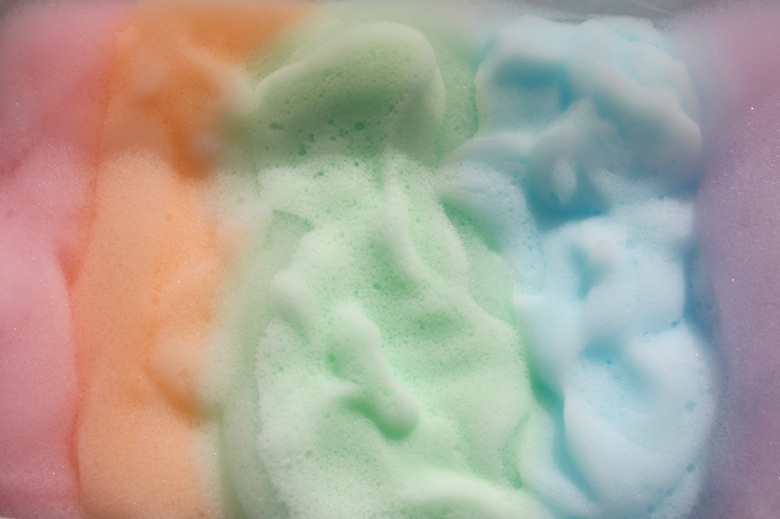 Without a doubt, this has been one of our most fun and engaging sensory activities in a long time, and for a little bit of dish soap, some water, and some food colouring, I’d say that’s pretty amazing!

Place all ingredients in a bowl.  Using a kitchen mixer or a handheld mixer, mix the ingredients on the highest setting for 2 minutes (or until the foam forms stiff peaks).  Repeat with as many colours as desired.