Miss G loves playing all sorts of card games, so when I came across Make Ten, a simple game that focuses math skills and uses just a generic deck of cards, I knew it would be a total hit.

UPDATE: Since sharing this game and our Make Ten printable play mat, I’ve had countless requests for play mats using larger numbers…  Well, I’m so happy to say that I’ve finally gotten around to creating a couple of options and best of all – they’re customizable and can be used with any larger number you choose!  Scroll to the very bottom of this post to find them. 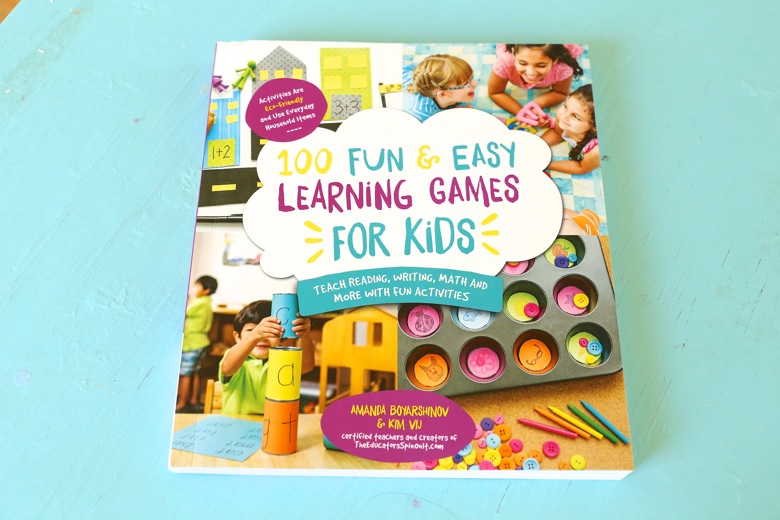 The idea came from this awesome book that’s brand new to our shelf – 100 Fun & Easy Learning Games For Kids.  It’s written by Amanda and Kim, the ladies behind The Educators’ Spin On It and I can’t tell you how great it is.  It’s absolutely chock full of really fun, really doable games that promote all sorts of learning using the simplest of materials.  We’ve got loads of the pages marked with activities for the summer months, but I decided we’d start with Make 10 because it’s a true partner game and I was feeling like I needed to spend some good quality one-on-one time with my girl today. 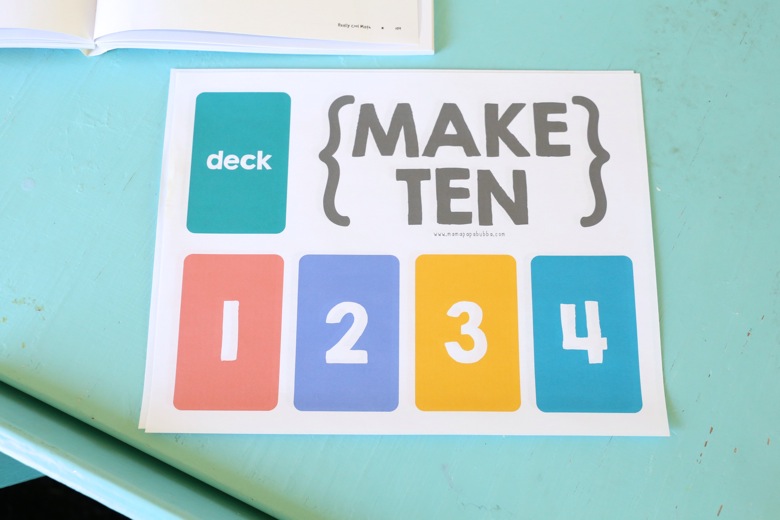 Though totally not needed, I decided to make a play mat to go along with our game just for fun! 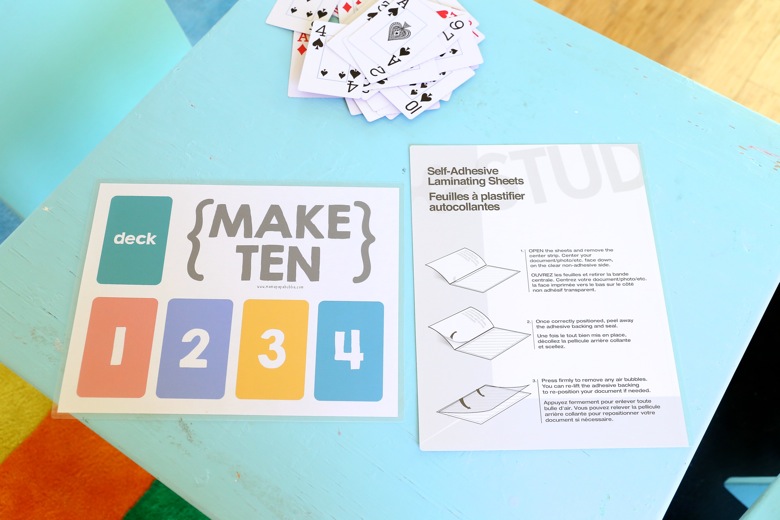 And since I haven’t yet splurged on a laminator since leaving Kuwait, we took our two printed copies and laminated them with the self-adhesive laminating sheets our dollar store now carries, which I think work just as well for projects like these. 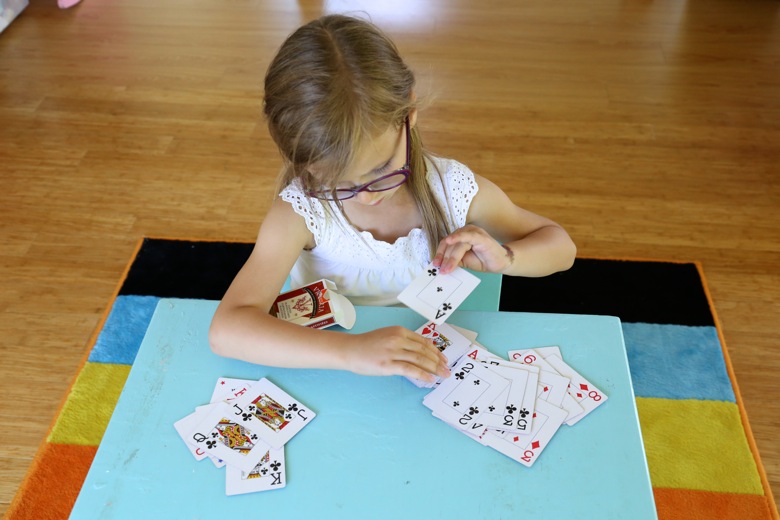 While I worked on the laminating, Miss G removed all of the face cards and the jokers from our deck of cards, leaving the aces in to use as ones. 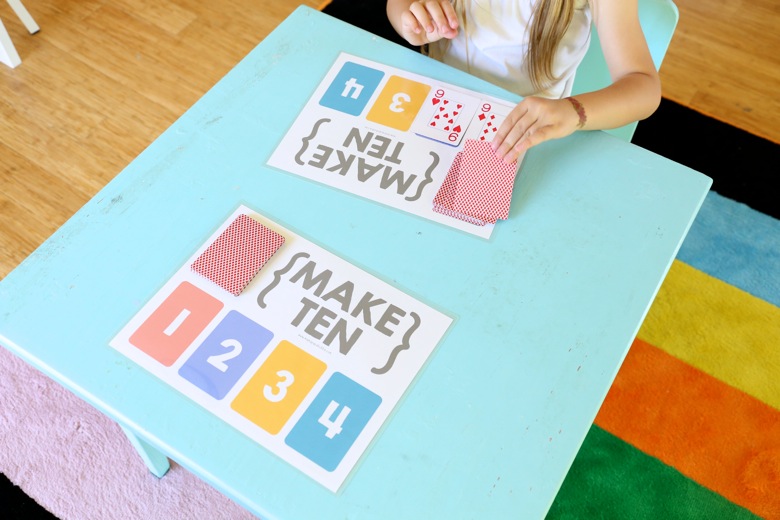 Then it was time to play!  To get started, we shuffled our deck {minus the face cards of course}, and dealt the entire stack out between the two of us.  Then we placed our decks face down on our mats and flipped the top four cards over onto the numbered spots. 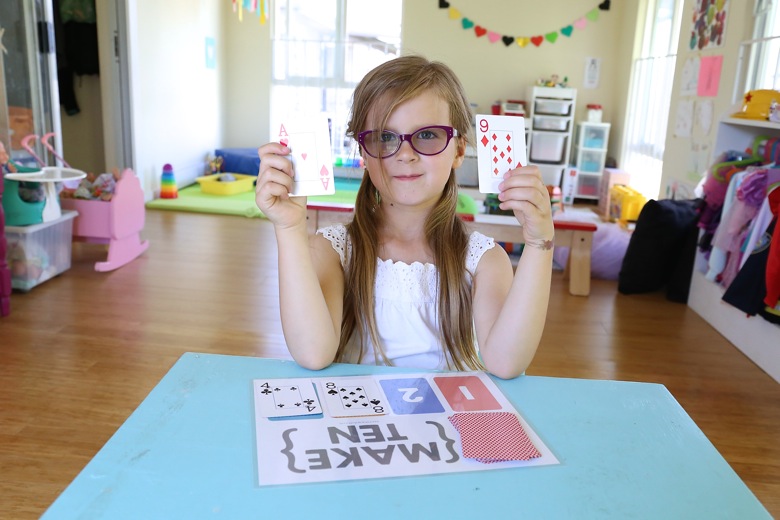 The goal of the game is simple – to make ten using any combination of the four facing up cards.  If you can make ten, you take those cards, show them to your partner,  place them off to the side {we chose to keep our groups of ten in separate piles so that we could count them up afterwards}, and replace them with new cards from the deck.  Then your turn is over and it’s your partner’s turn! 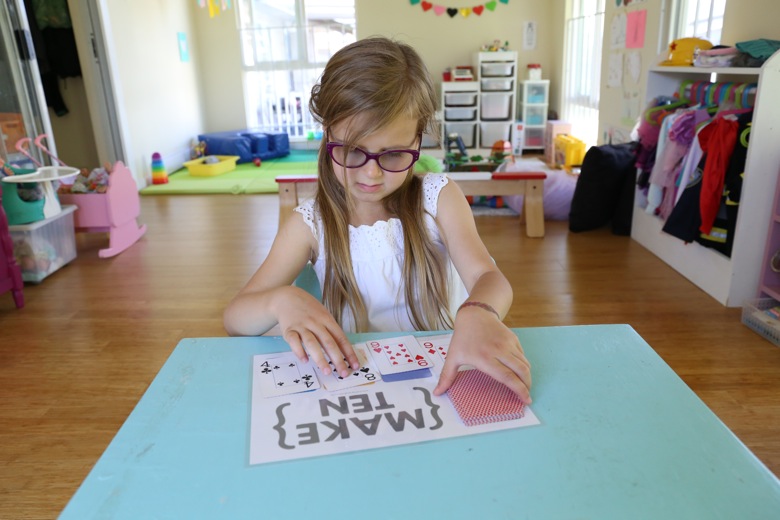 If you can’t make ten, you choose one of your face up cards to put at the bottom of your deck, before replacing it with a new card from the top of the deck. 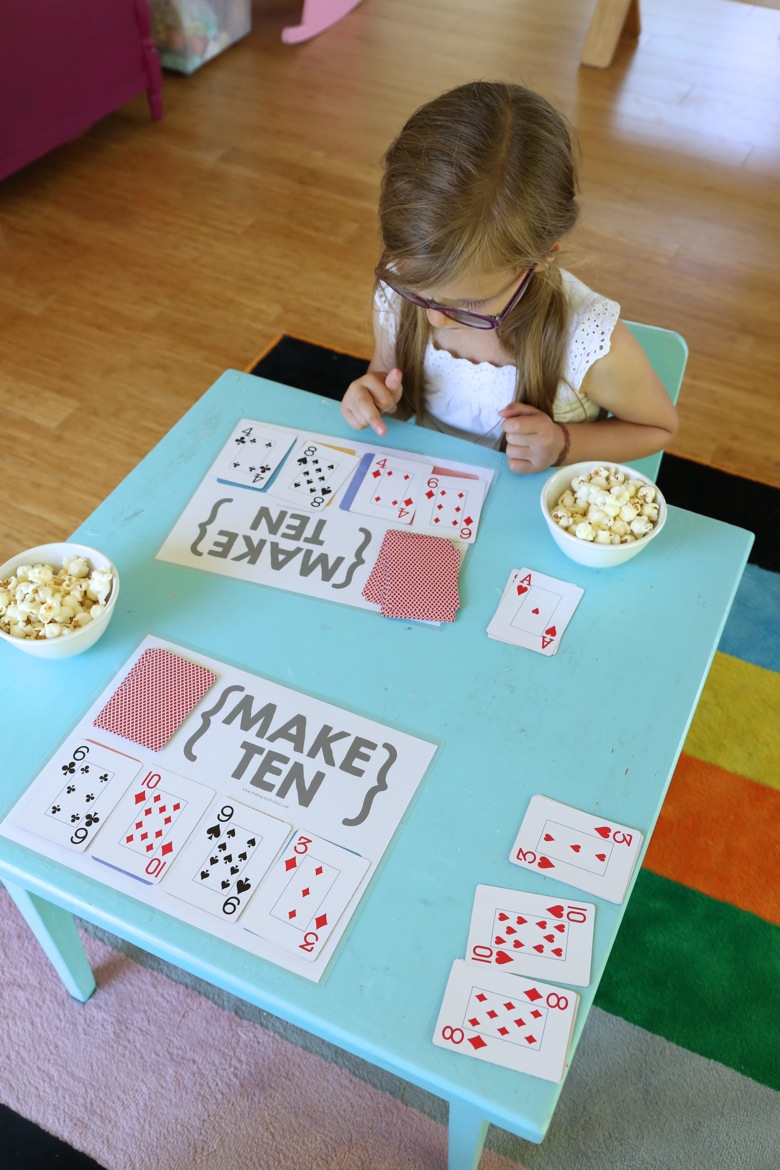 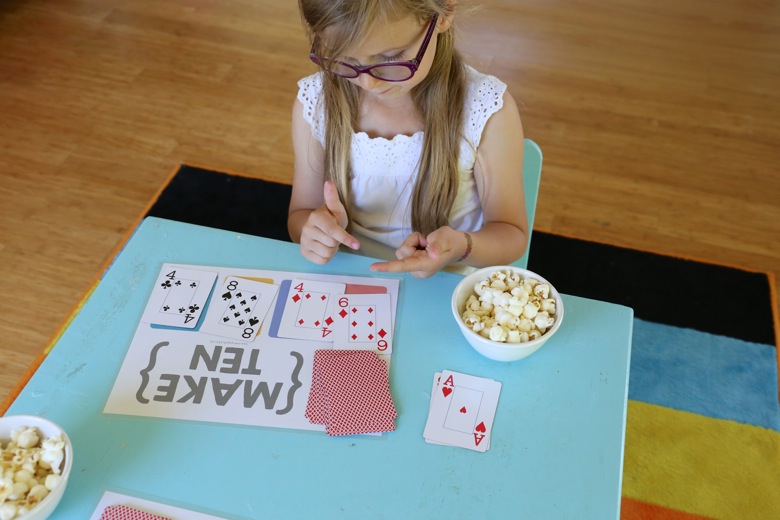 What I love about this game is that it really gets you thinking.  Though sometimes you’ll get a ’10’ card {or a simple combination of ten} and it’ll be really easy, other times you have to get creative in order to come up with a combination of cards that make ten.  Throughout our game, Miss G said things like, ‘Well I know that 5 and 5 make 10, but I only have one 5…  But WAIT!  I also have a 2 and a 3 and that makes 5, so really that’s like having two 5s!!!’  She also was thinking ahead in terms of what she had on her play mat…  ‘Well, I have 7s and 8s, and those can’t be put together to make 10, but if I could make a trade and get a 2 or a 3, then I could!’ 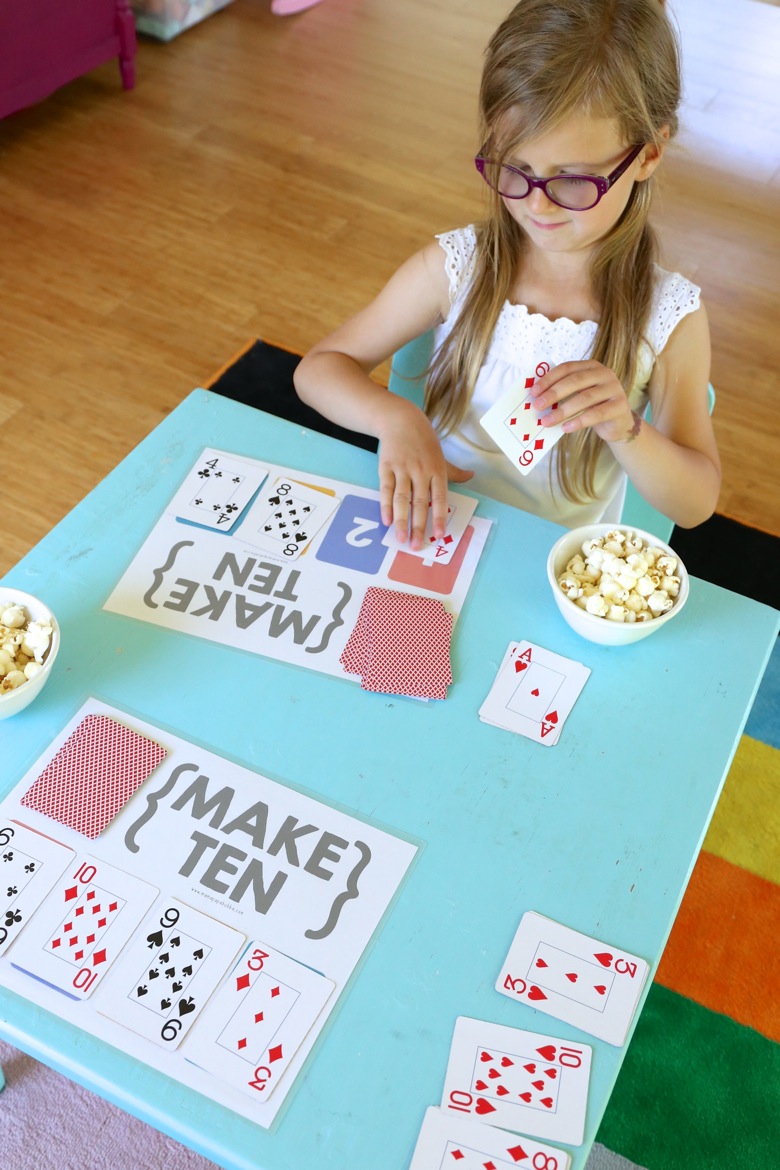 Afterwards, we added our play mats to our bin of card games where they’ll be kept until we play again.  And in the meantime, we’ll definitely be trying some of the other games in the book! 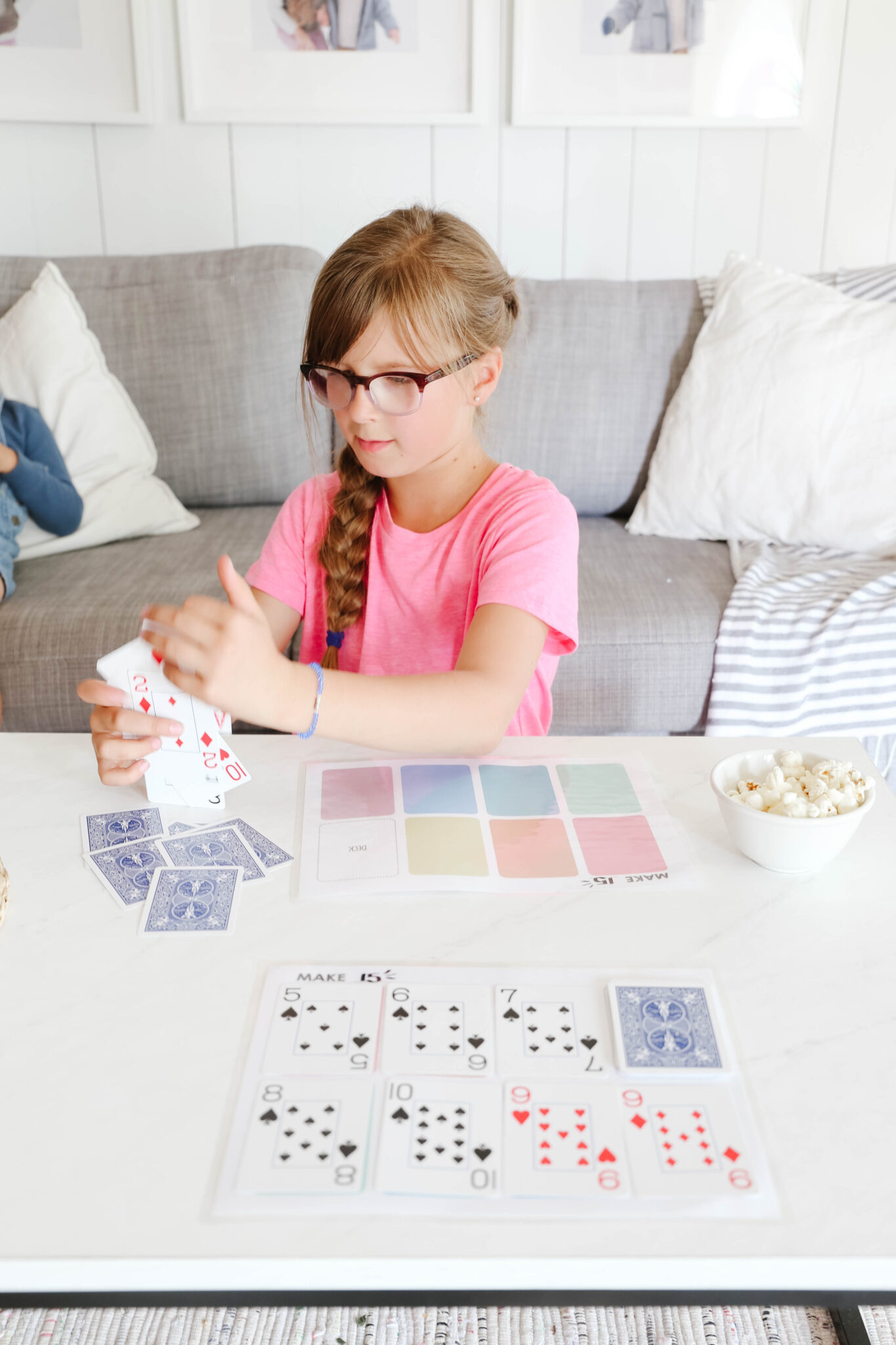 Since originally sharing this game and play mat, so many people have asked for play mats using numbers larger than ten.  “Make 20” and “Make 15” have been asked for the most,  but I have gotten the odd request for other numbers too, so I decided to go with a couple of options you can customize. Basically pick the one you like best, print it off and laminate it, then fill in the number you want your kiddo(s) to create using a dry erase marker.  One option gives you seven spots for face up cards {Miss G and I tested it as a Make 15 game board and it worked great} and the other gives you 6 spots for face up cards.

Here’s a peek at both: 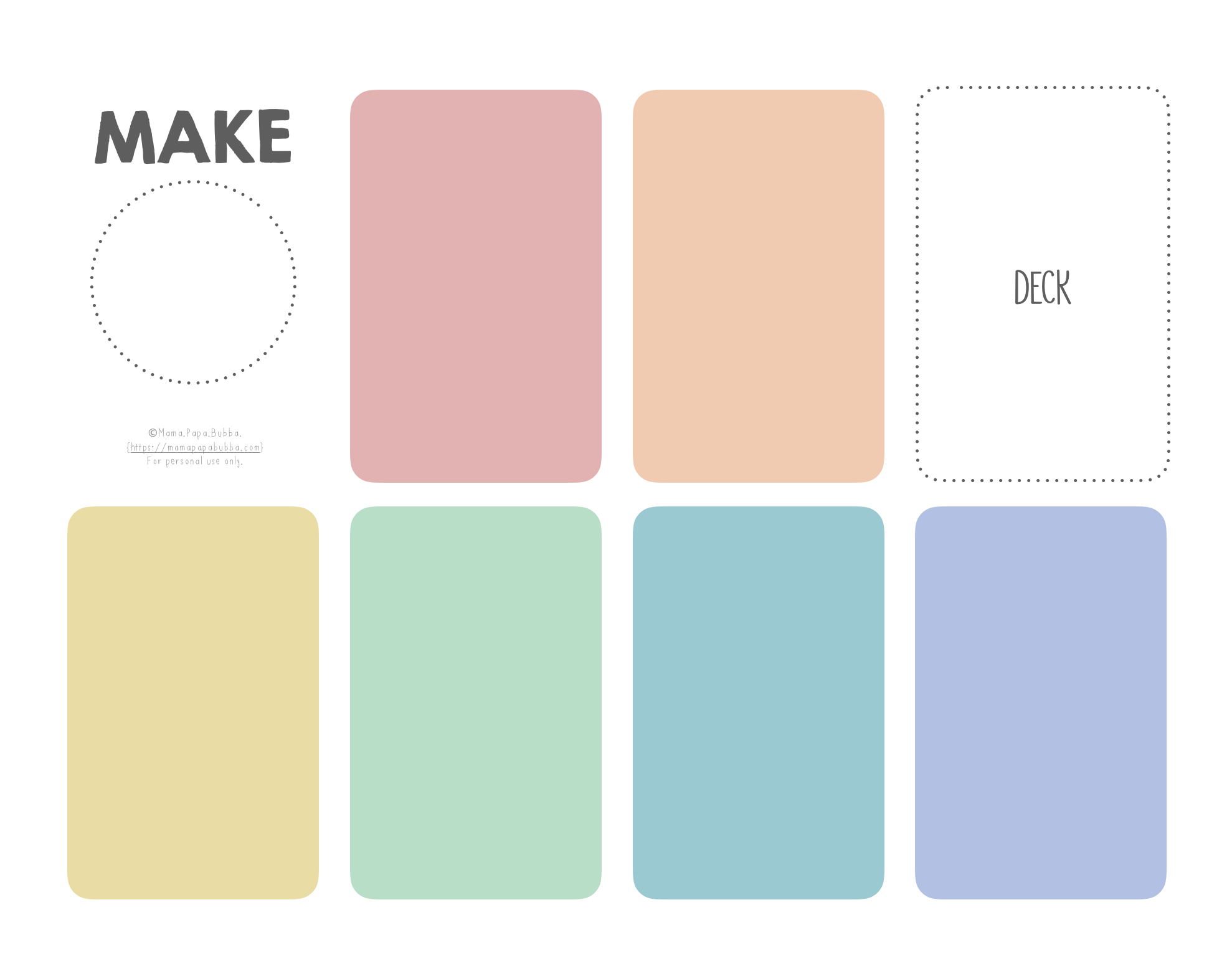 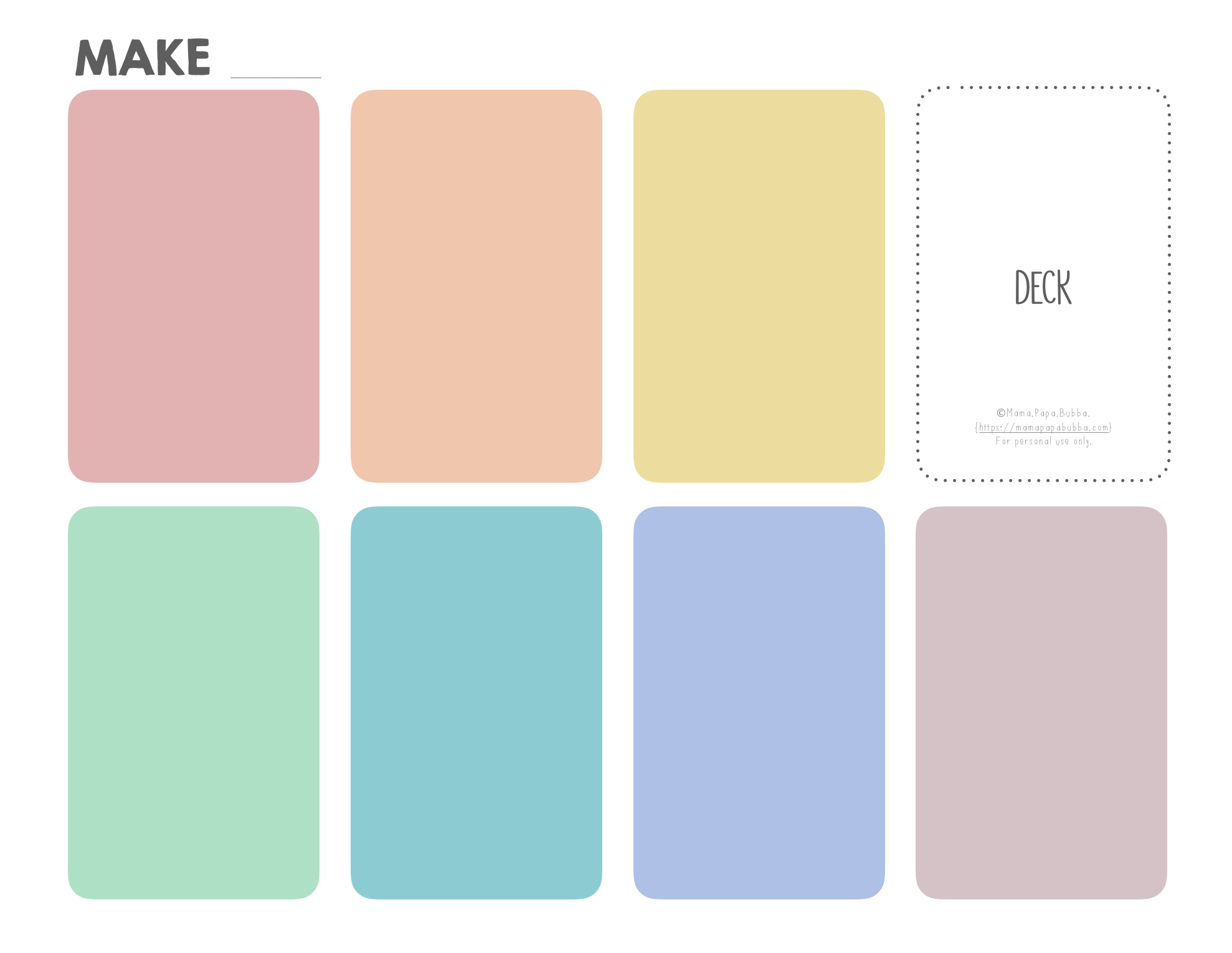 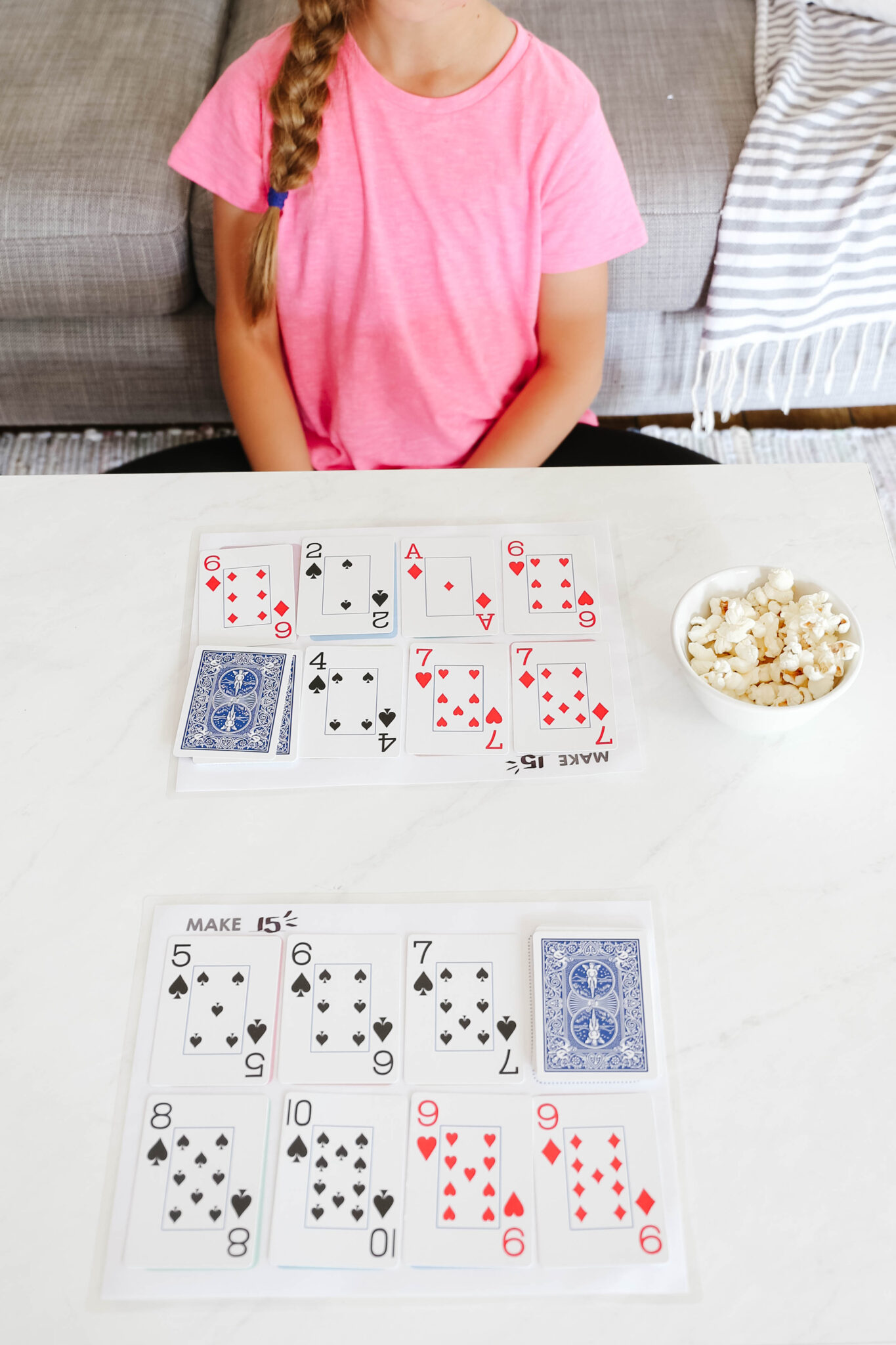 (Those 15’s are just written on our laminated play mats using a white board marker and will easily wipe off using a cotton pad.) 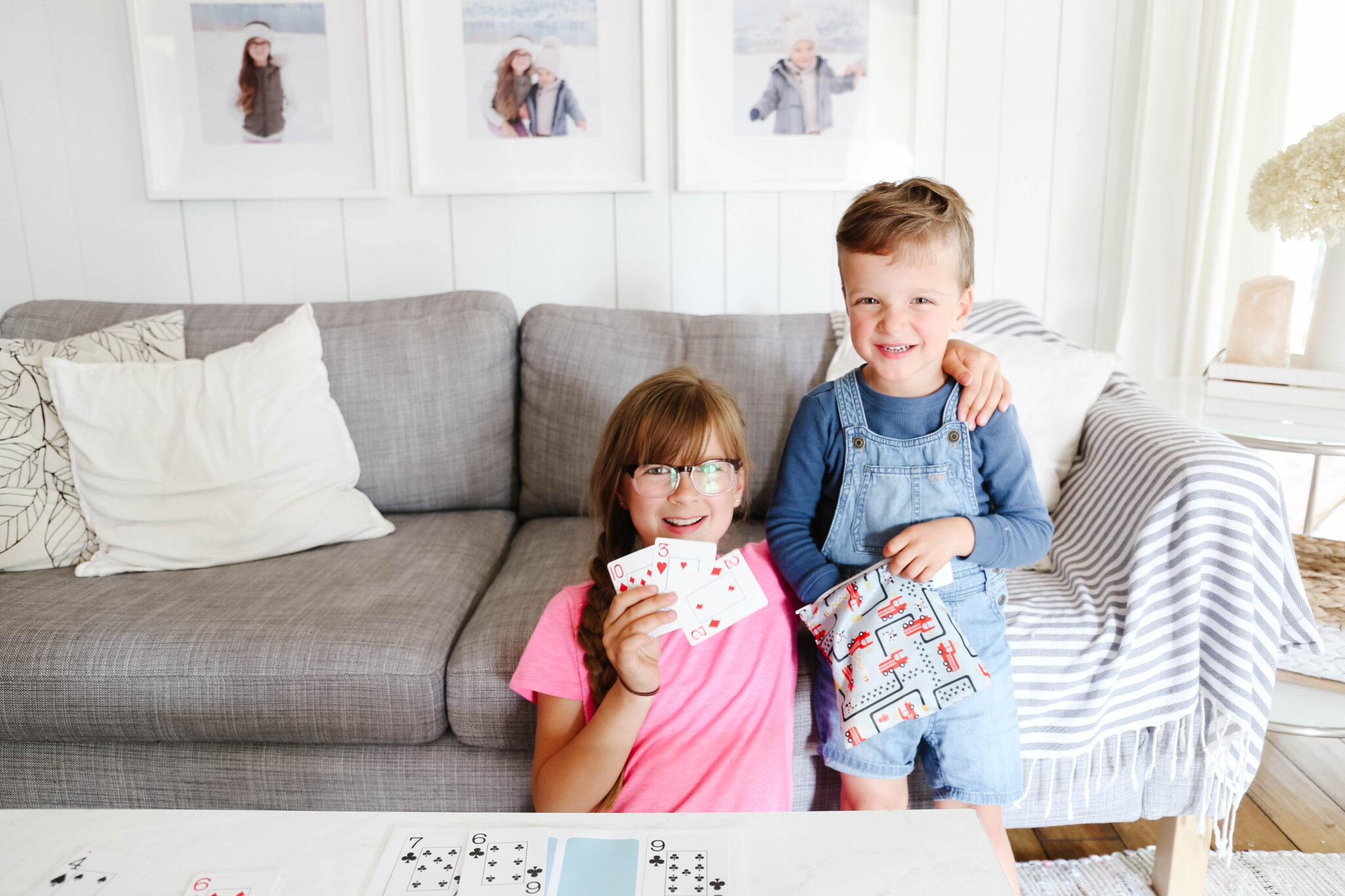 Now I wouldn’t say this game is the best when it comes to competition or having a clear winner (Miss G and I got rid of our cards on the same turn and had the same number of “fifteens” two times in a row), but it’s excellent for creating sums, which is the most important part in my opinion, so I’m calling it a success. 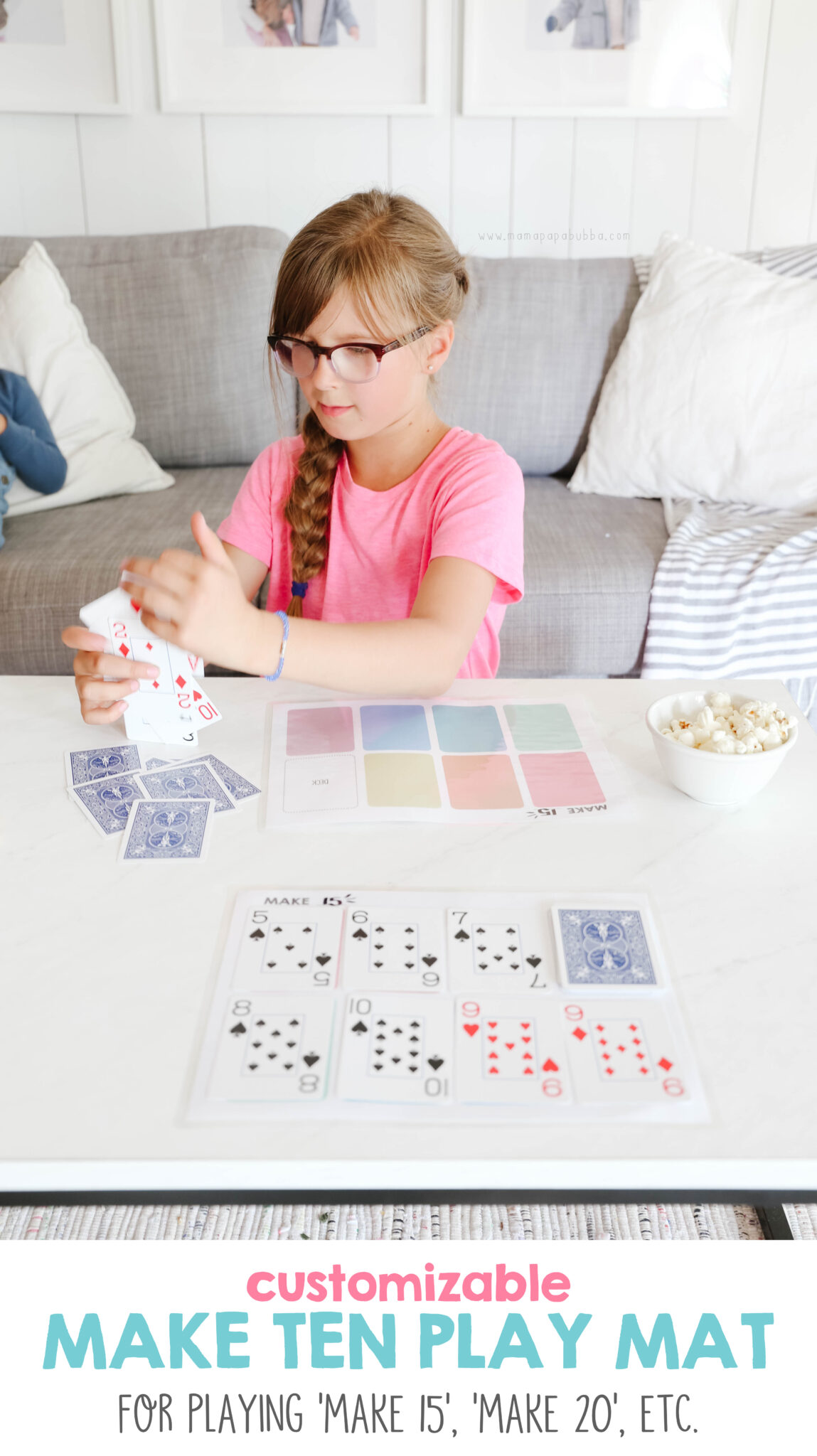 34 thoughts on “Make Ten {an easy card game for kids}”