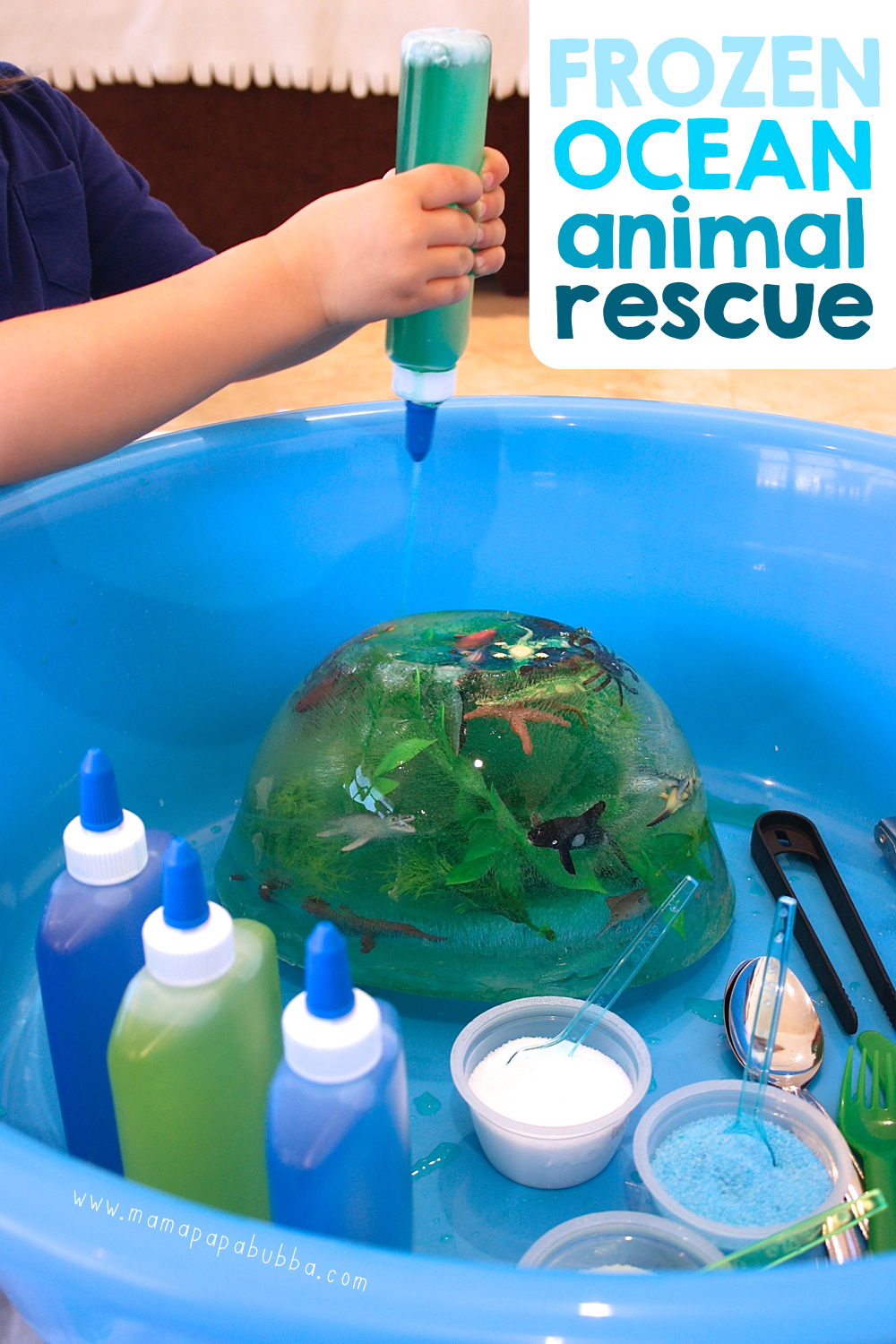 Gracen and I are lucky enough to have one of her little friends join us for an afternoon of play each Wednesday.  They play quite well together, so I put a few things out for them to explore  in advance, then step back to let them play, helping communication and sharing happen when needed.  We always have a good time together, but the last couple of times I’ve noticed that together they plow through the activities I’ve set out (2 minutes of play dough! 1 stroke of paint!  3 minutes of water play!) and then look at me with eager eyes for something more.

I knew I wanted to try something different for today’s play date and my thought was that if I set out only one activity – something engaging and encouraging of teamwork – the afternoon may have a calmer vibe to it.  I wasn’t sure what that activity would look like exactly, but when Jackie of Happy Hooligans shared her dino dig on our Facebook page, I new that I wanted to try something similar.  This sort of ‘buried treasure’ ice play has been on my mental to do list forever, and I knew it would be the perfect way to slow things down a little and allow the munchkins to really become invested in their play. 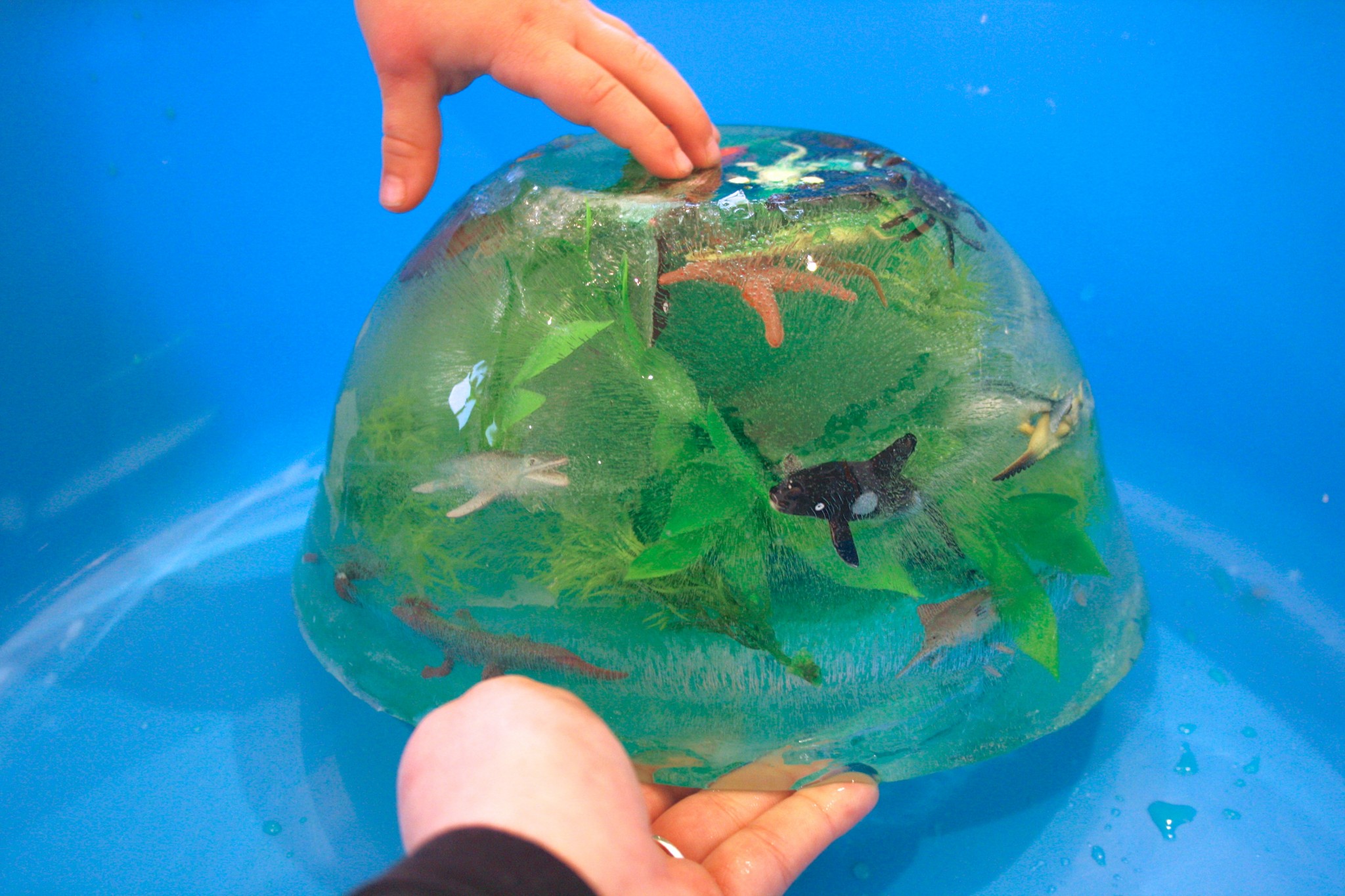 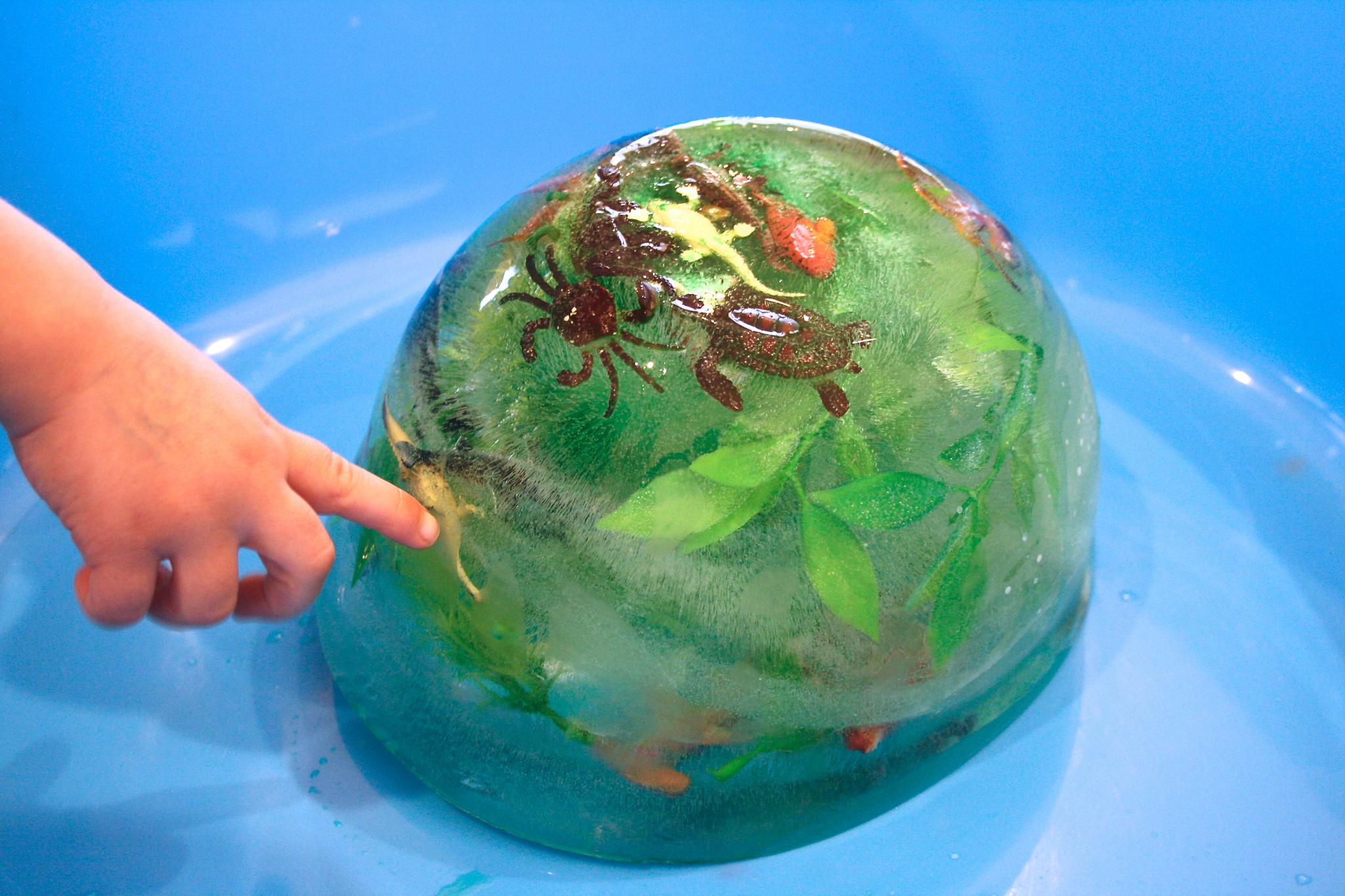 Though it took a little bit of advanced planning, the activity was a breeze to set up.  Using Miss G’s collection of miniature ocean creatures, a few plastic aquarium plants, a plastic mixing bowl, tap water, and a few drops of food colouring, I created a ‘frozen ocean’ by freezing it in layers,  adding a few more plants / animals and more water each time. 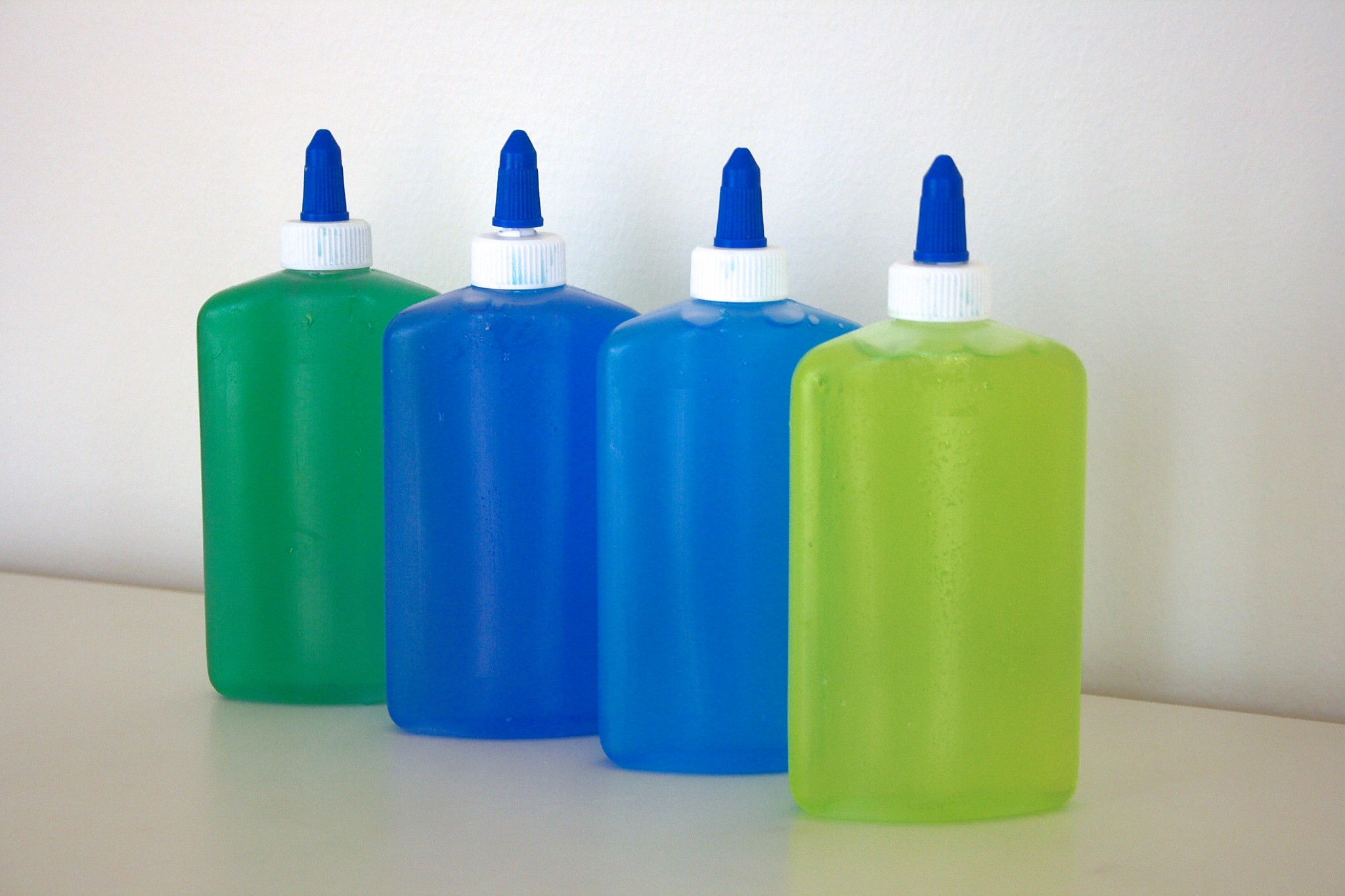 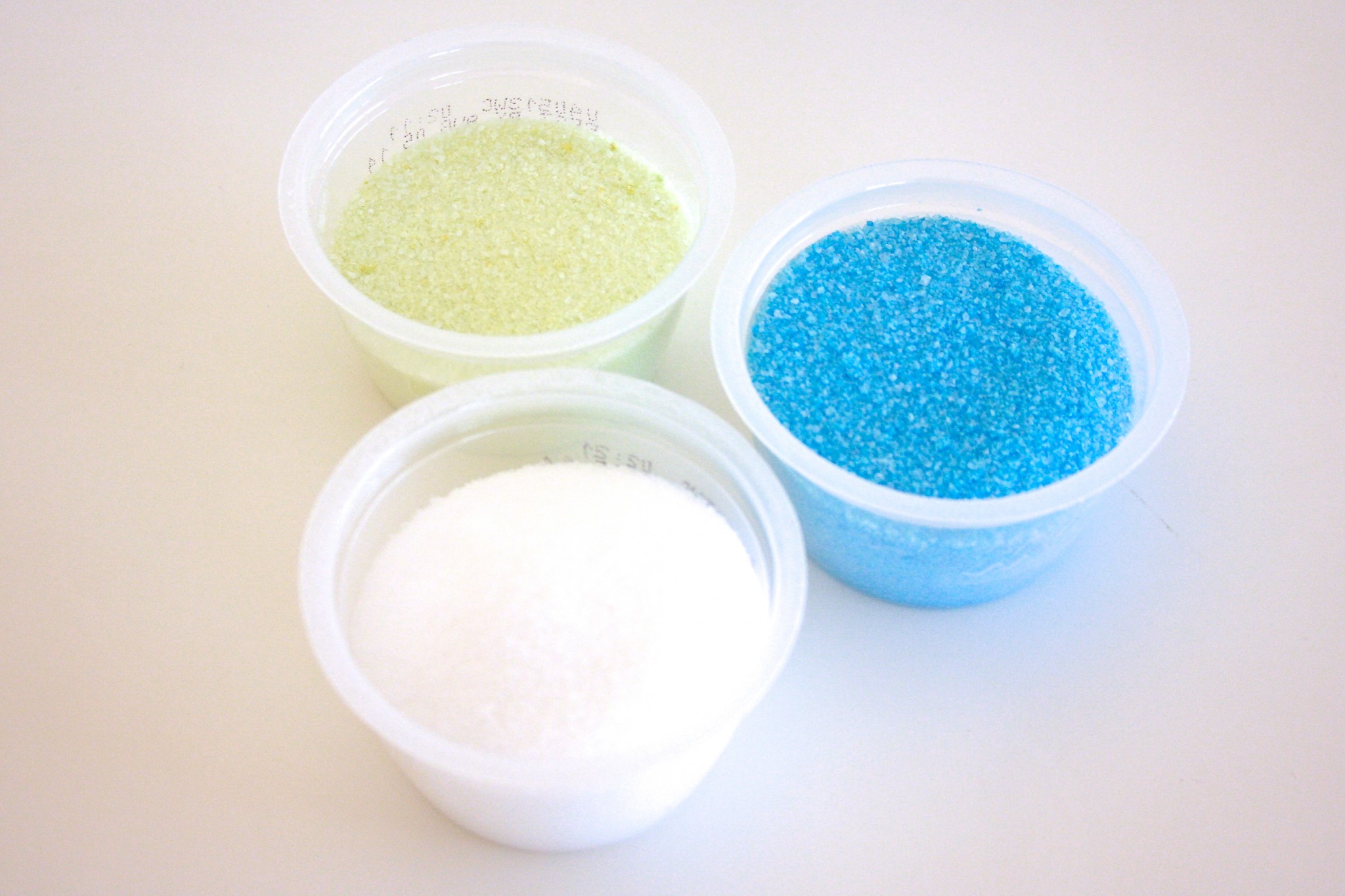 And some coloured salt which is simply made by shaking table salt and a one or two drops of liquid food colouring in a jar or bag. 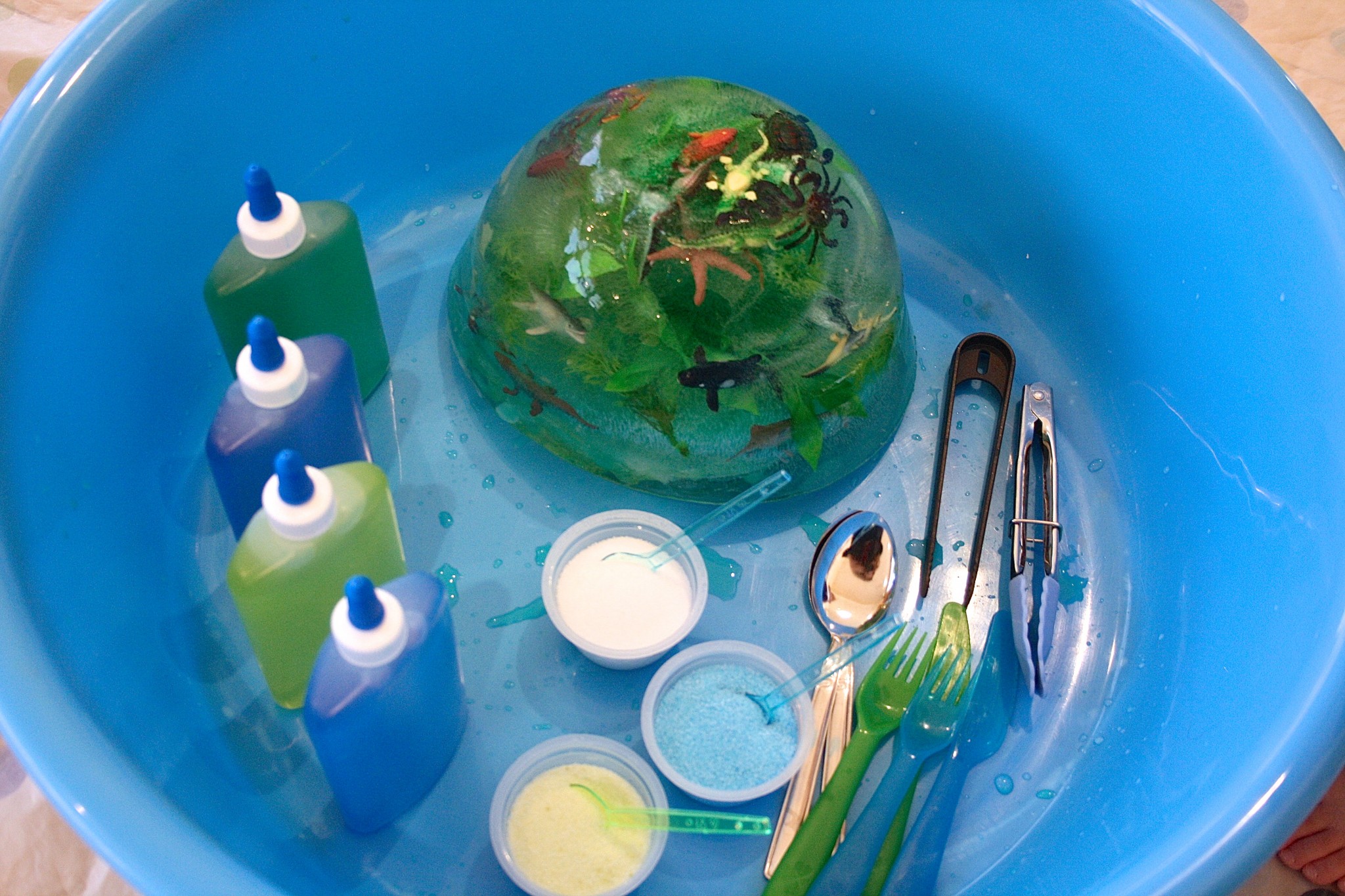 Then I set everything out, along with some cutlery and mini tongs, in a great big shallow basin placed on an old shower curtain. 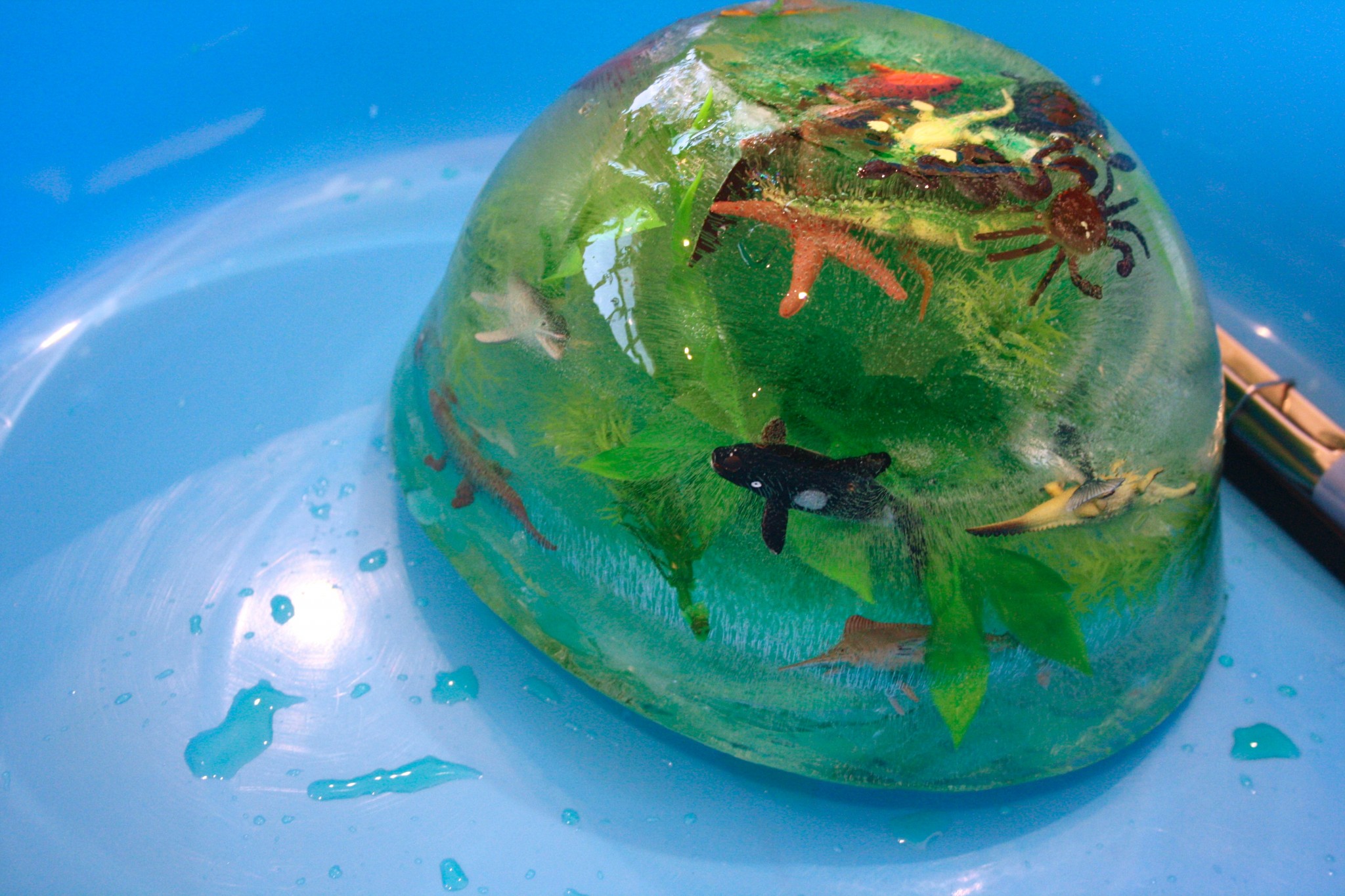 Before getting started, we investigated the frozen ocean a bit and the munchkins pointed out all kinds of cool creatures that needed help ‘getting unstuck’. 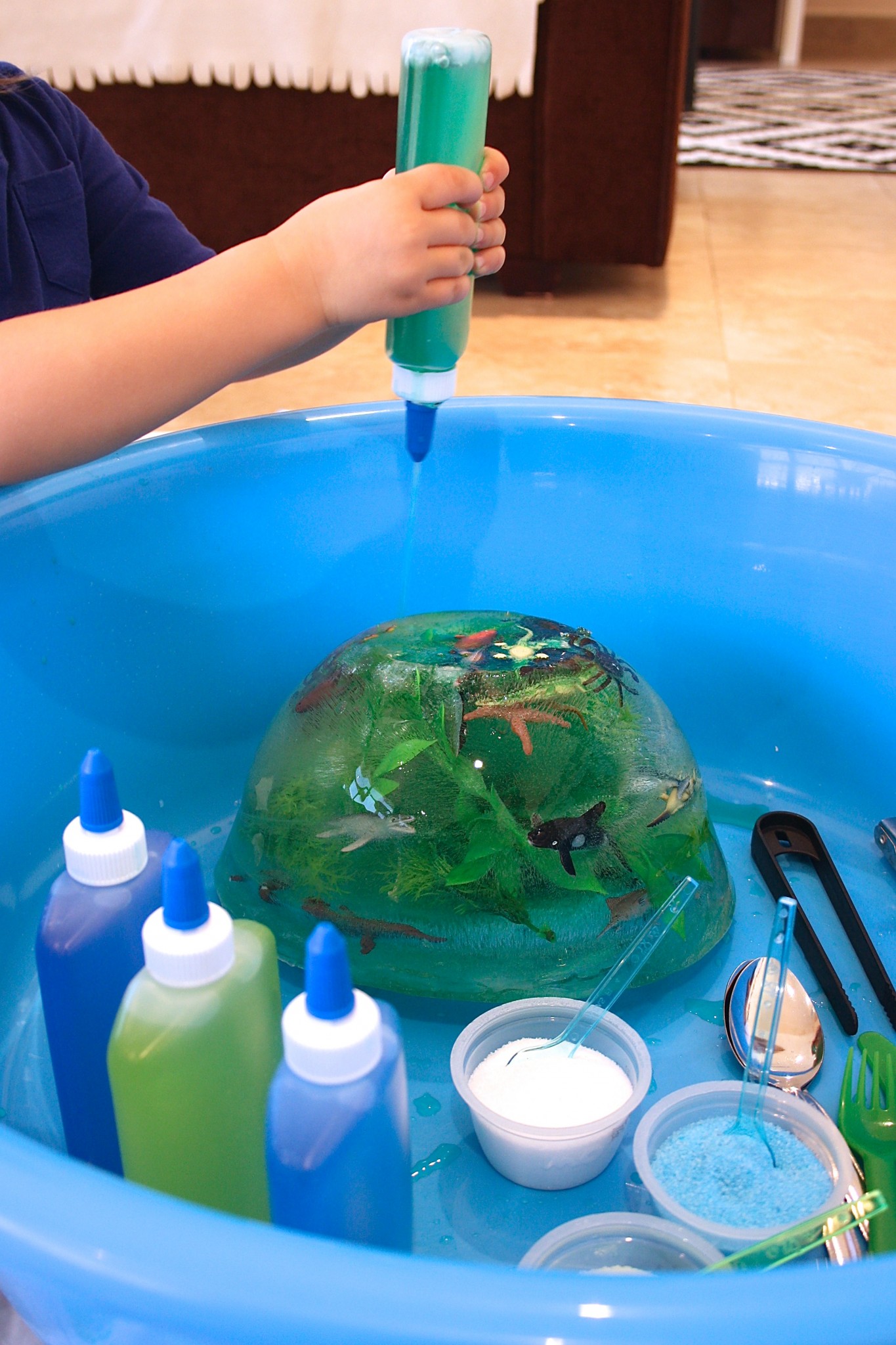 Armed with their tools, the pair got started on their mission. 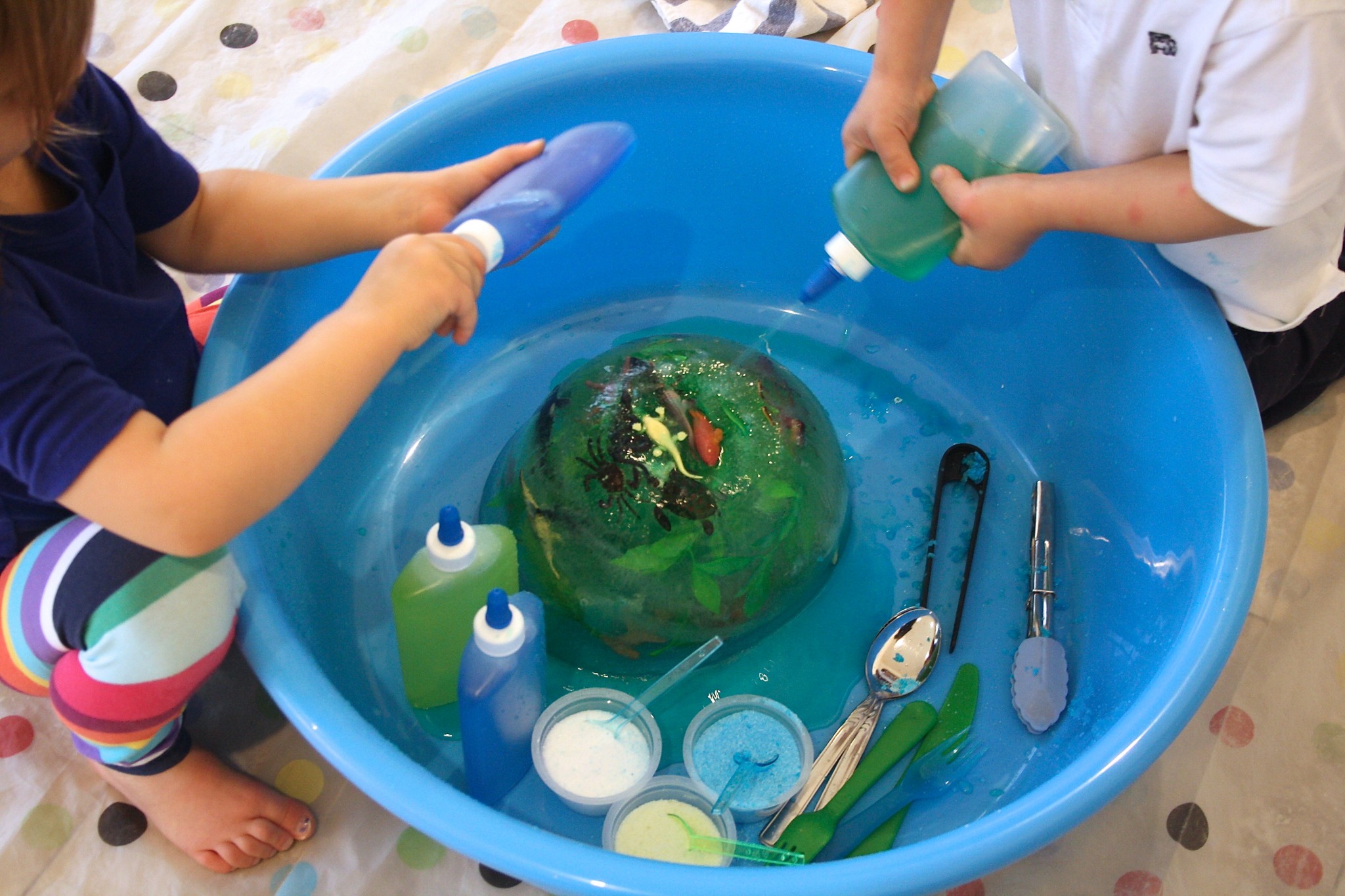 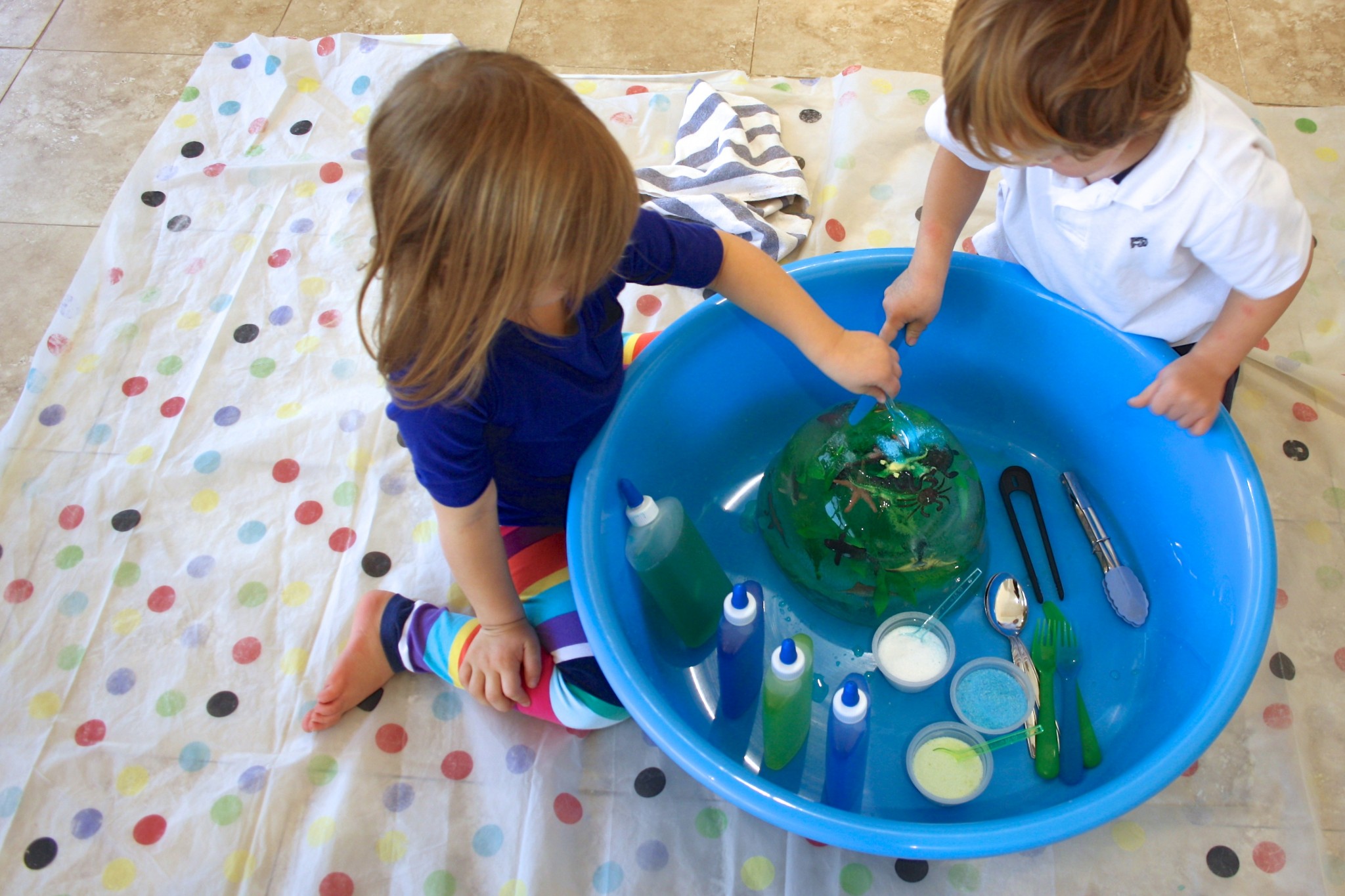 And then came out the salt.

One thing that they quickly learned together was that if you sprinkled some salt on the ice and then quickly washed it away with a stream of water, the salt didn’t have enough time to do its job. 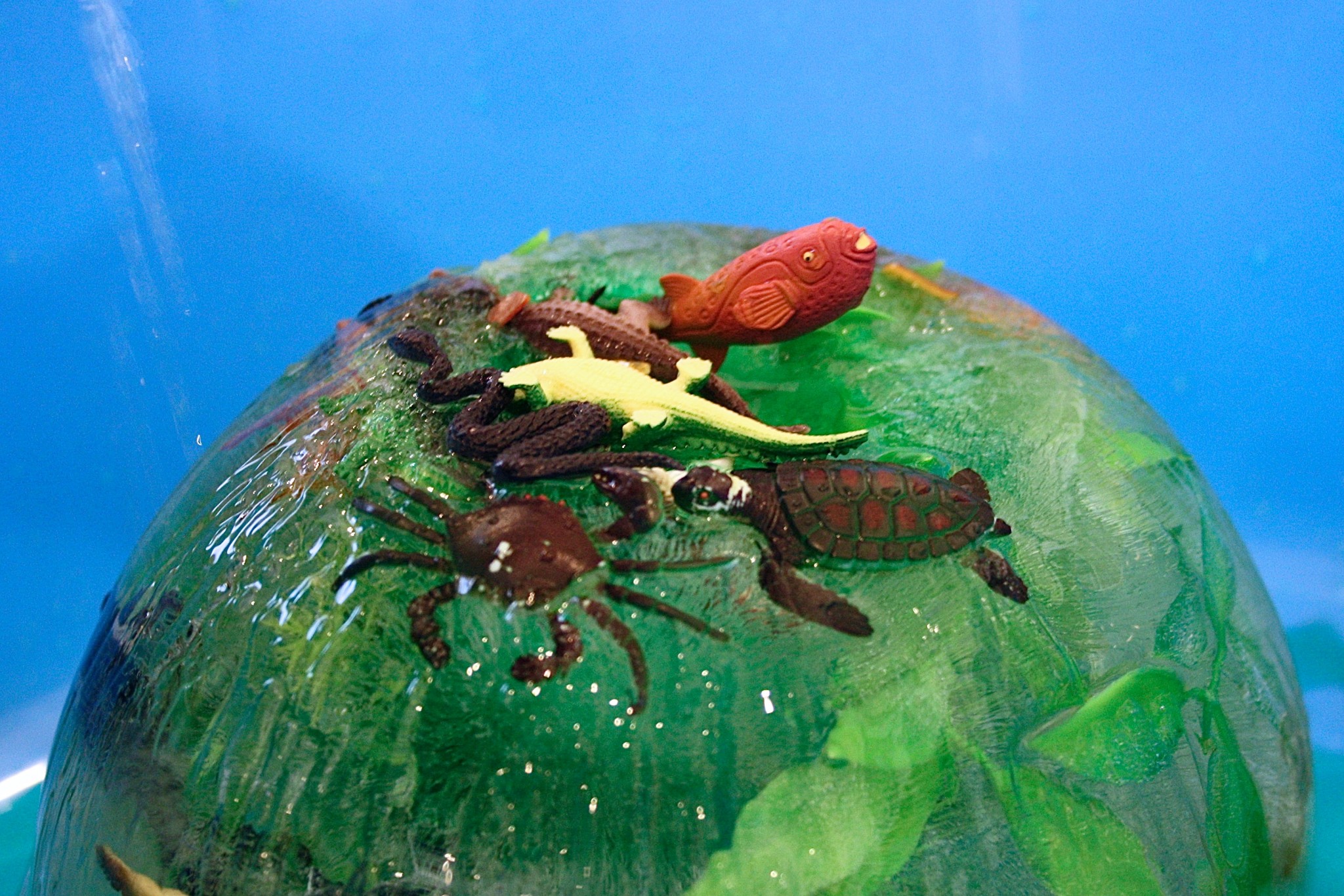 With some serious team work, scraping, sprinkling, and spraying, some of the trapped sea creatures began to come loose. 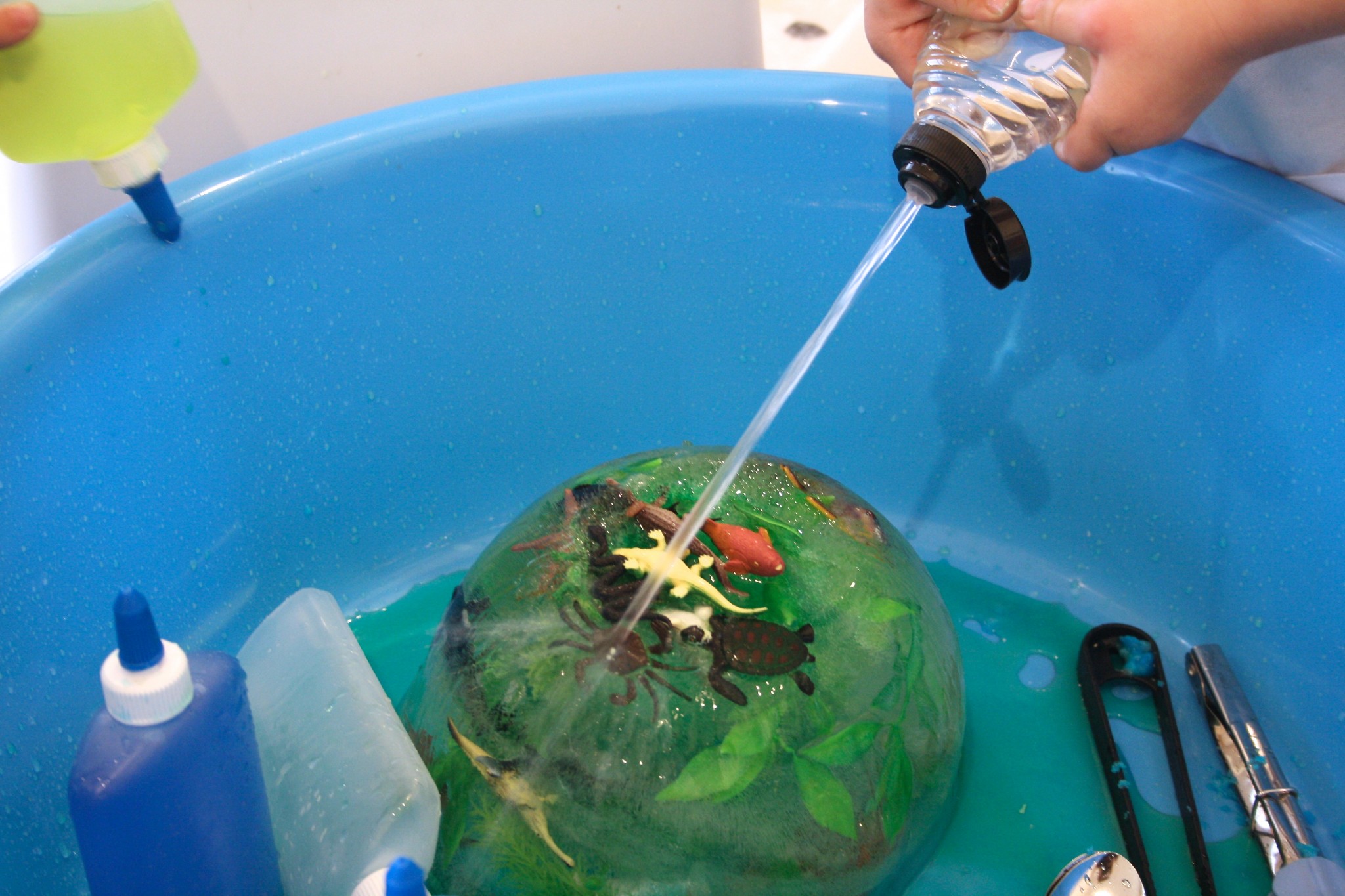 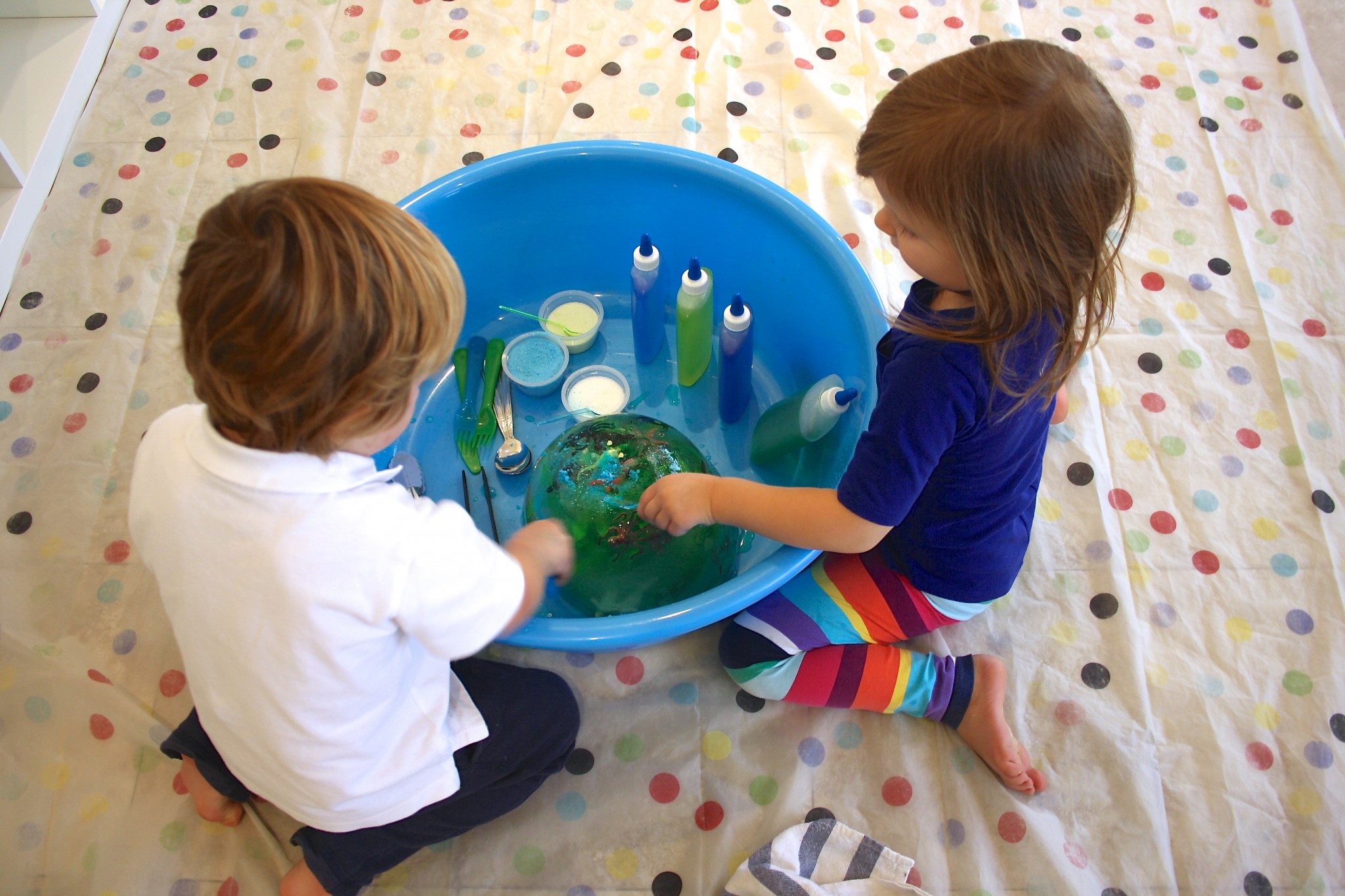 For much of the time, they focused on one very-close-to-being-free creature at a time, moving on to another only when the rescue was complete and proper cheers and celebrations had taken place.  Yay for working together! 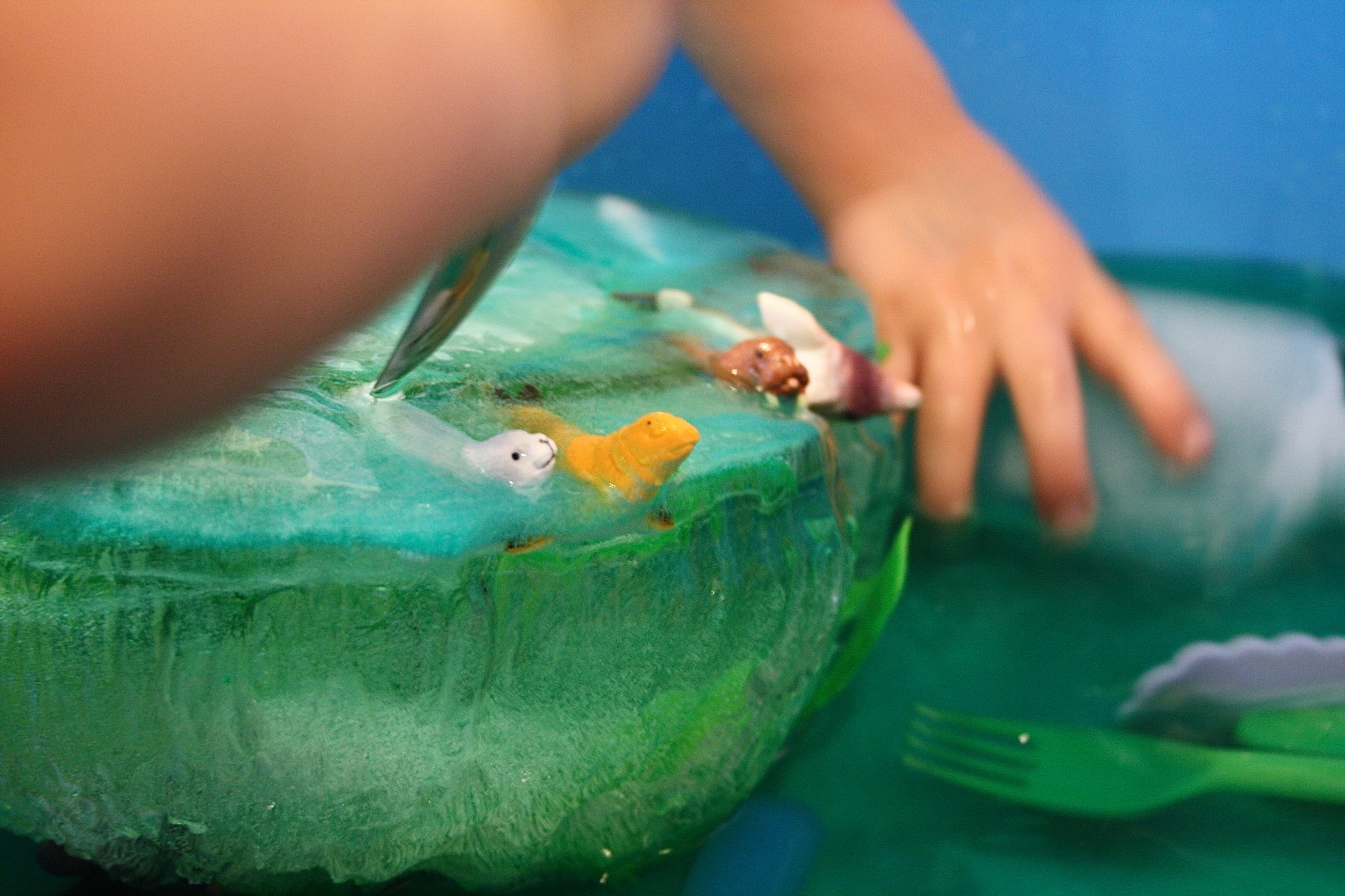 Every now and then, they’d flip the ice block over to see what was going on on the other side of the ocean, and we were ofter surprised to see some nearly free creatures just needing a little tug to come loose. 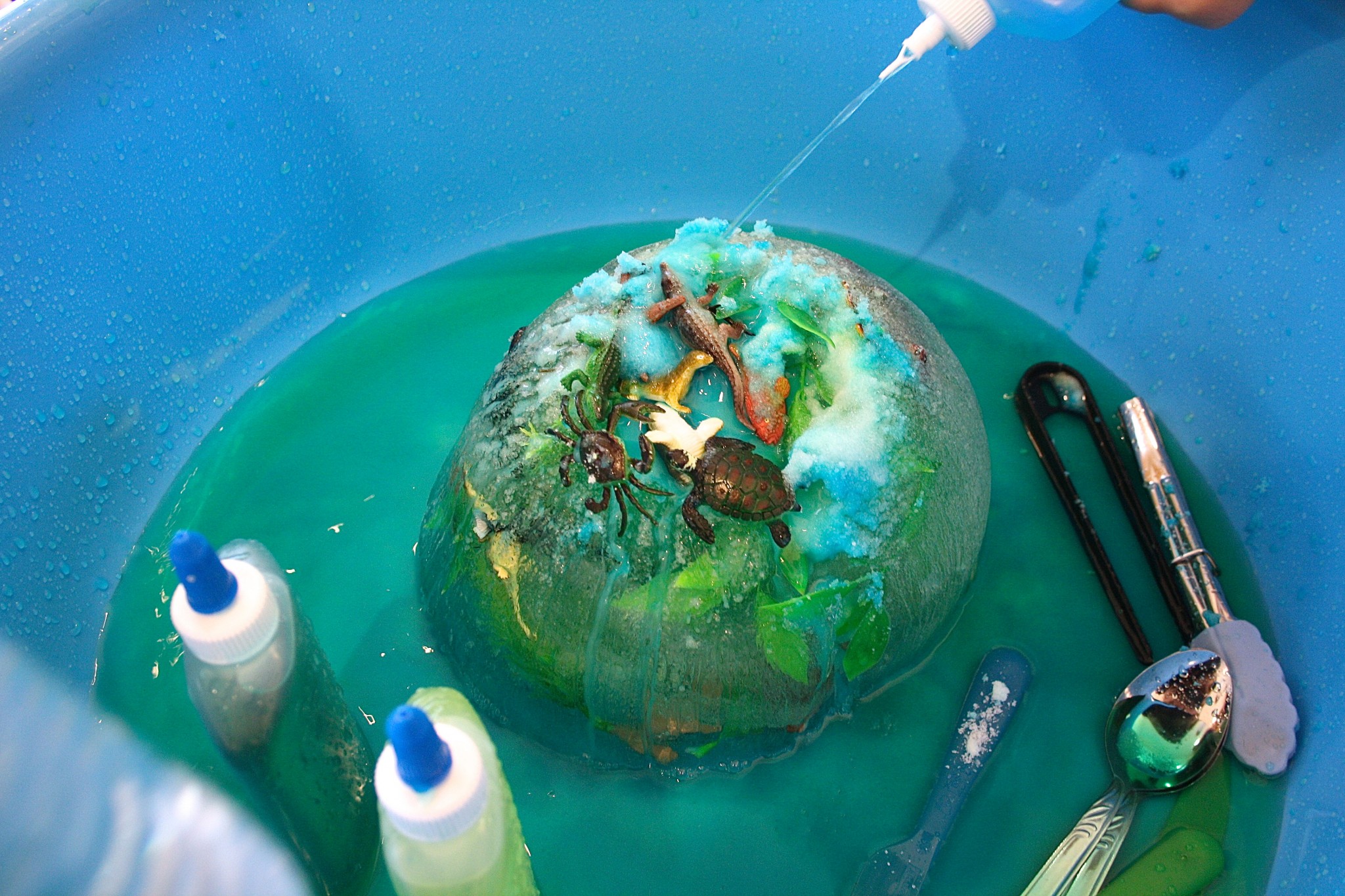 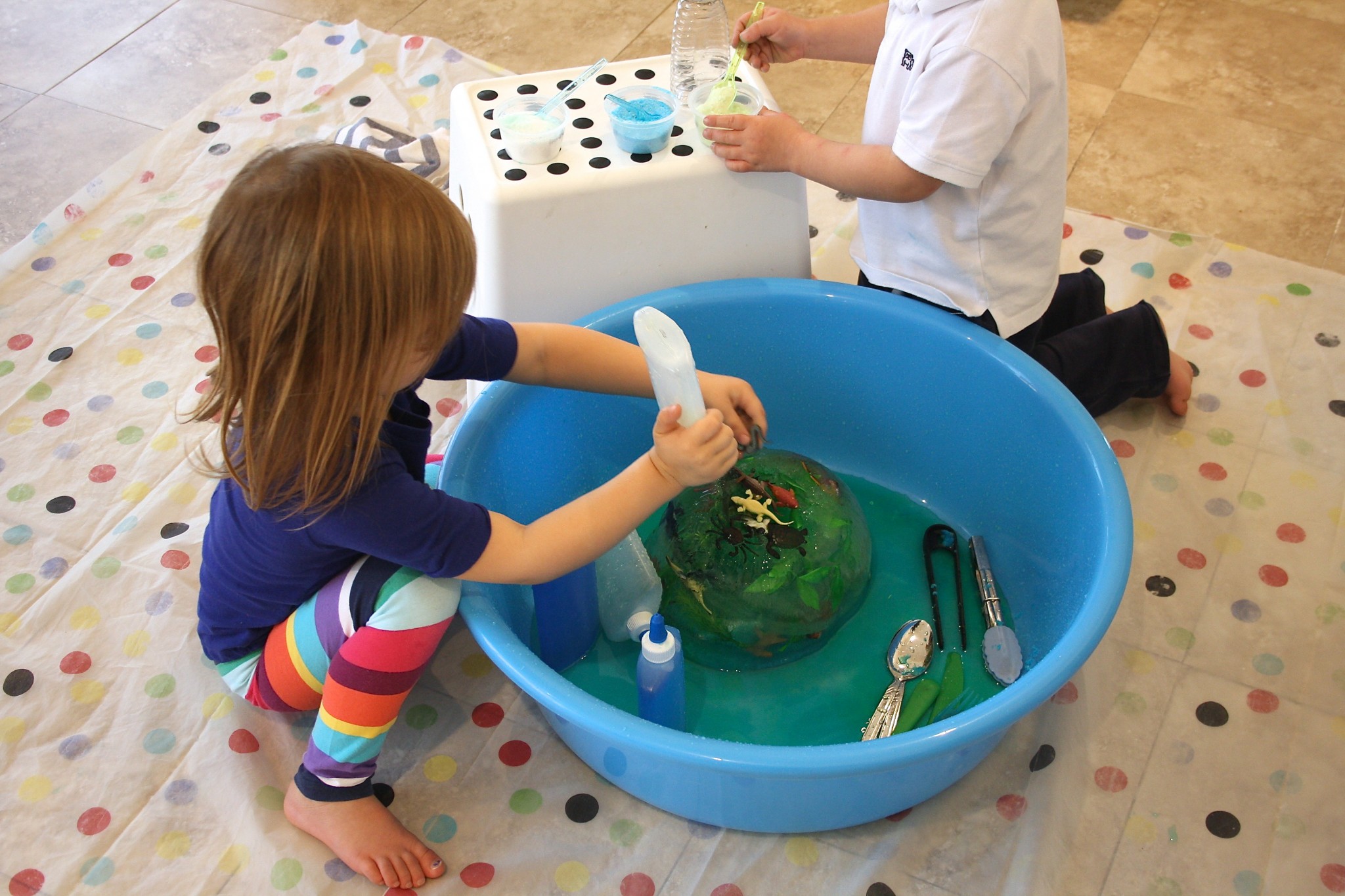 Throughout the activity I did fill their water squirters and salt containers up a few times, but I also encouraged them to reuse the water and salt that was at the bottom of the basin and to try using different scraping and chipping techniques too, which they were happy to do. 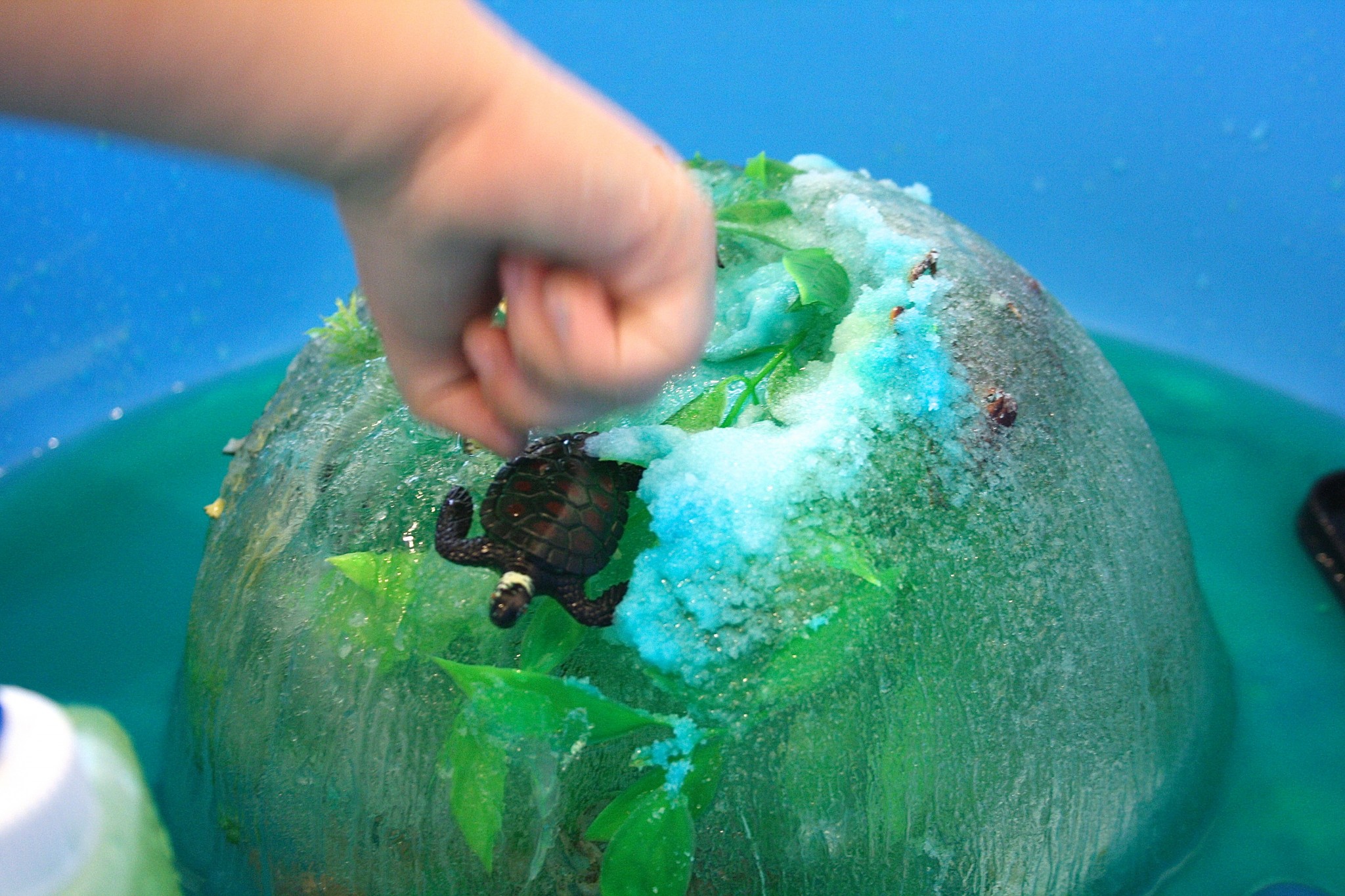 Besides being super engaging and encouraging of cooperation, the entire process was just so beautiful!  The sparkly salt paired with the textured melting ice in a pool of greens and blues… It was gorgeous! 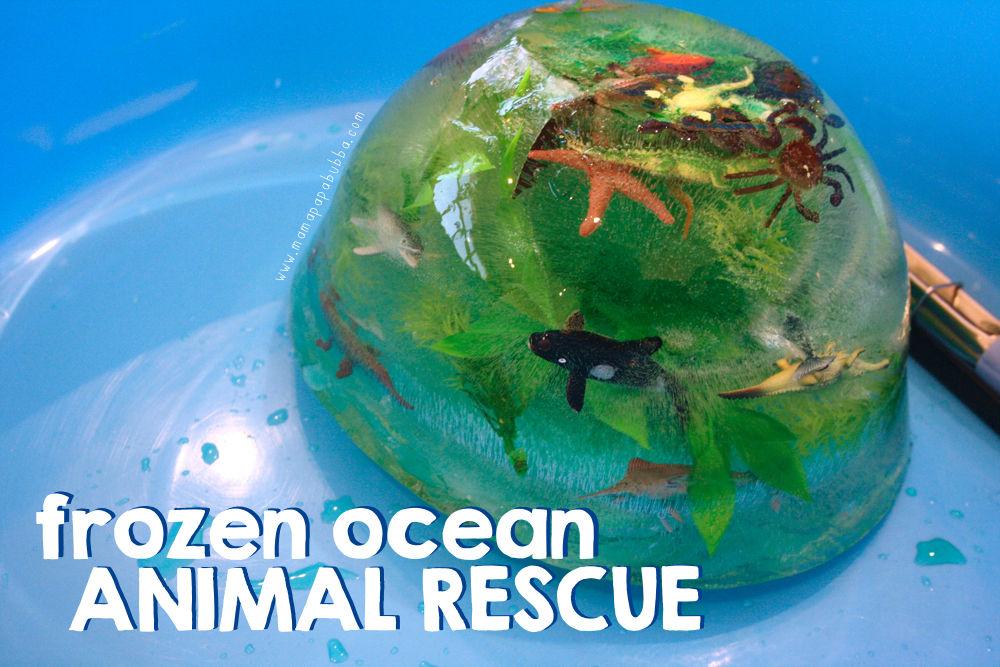 45 minutes after starting the mission, my little rescuers had saved all of the ocean creatures and our ice block was nearly gone.  Now I can’t wait to do a larger scale version outdoors in the summer…