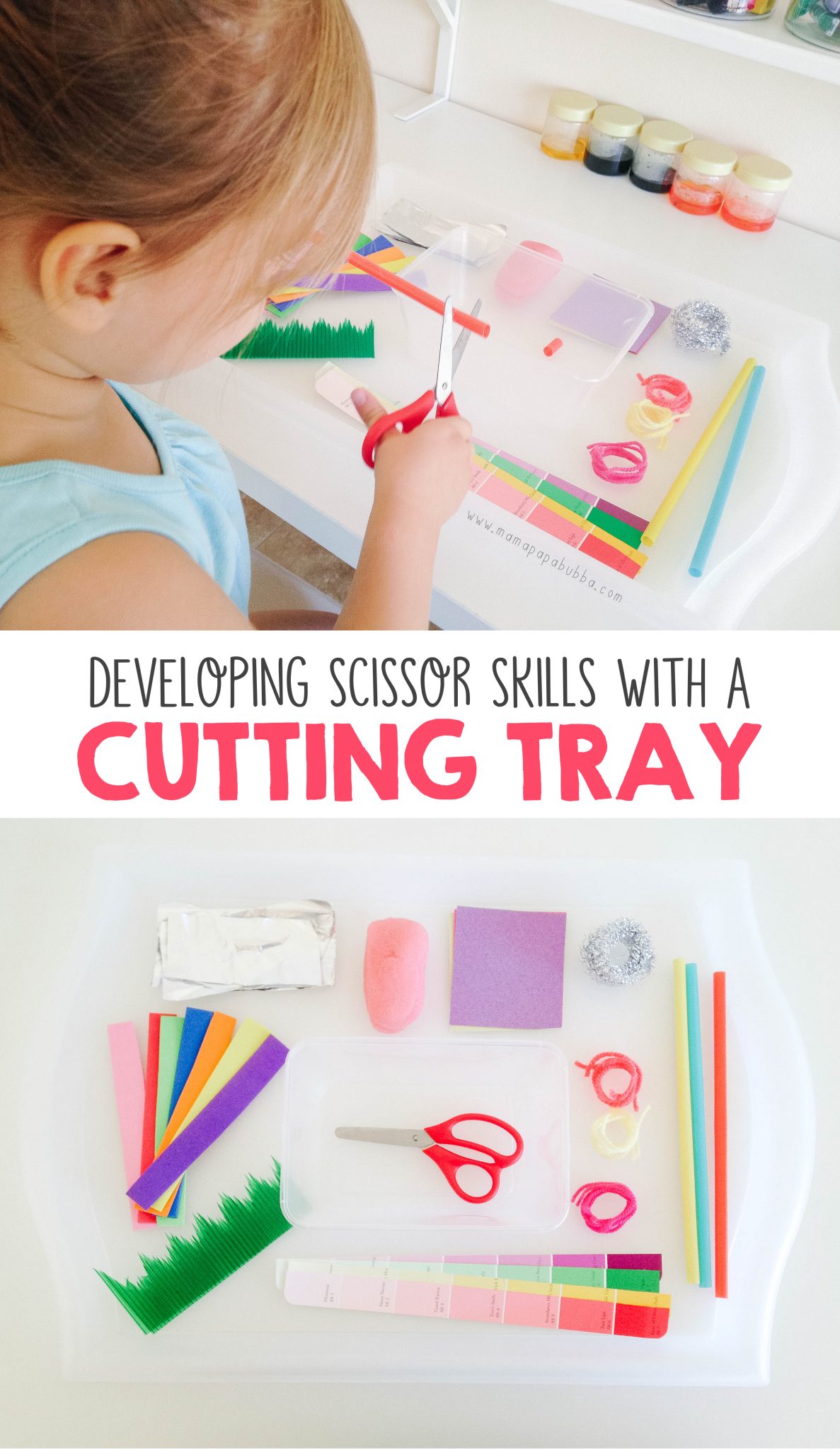 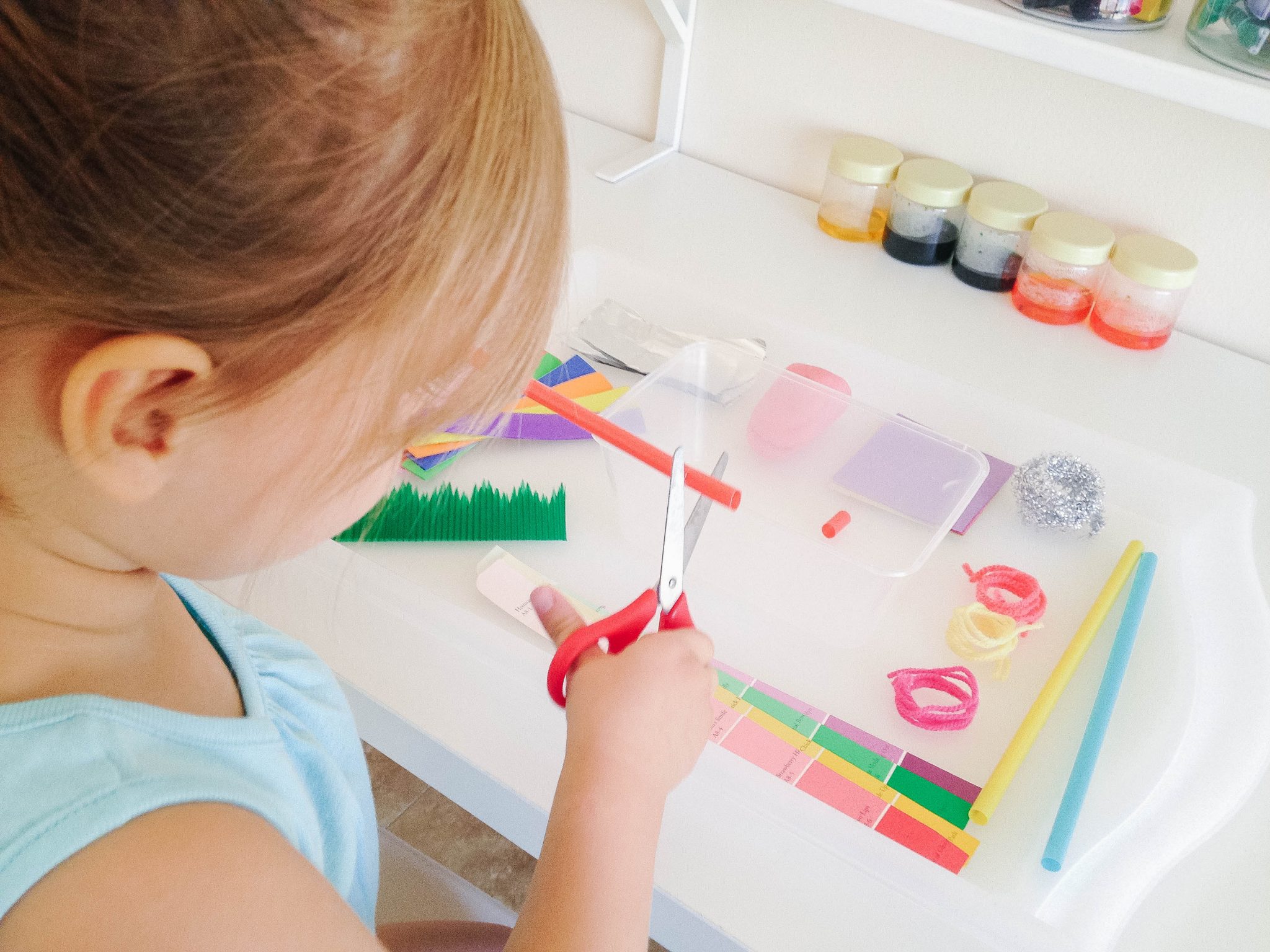 That’s where this simple cutting tray comes in.  Today as Grae tidied up from quiet play time, I gathered all sorts of things {mostly bits and bobs leftover from previous crafting sessions} that I was okay with her cutting.  I set them out on a tray along with a pair of scissors and a ‘chopped bits container’, and invited her to play at our workbench while I washed dishes {in a separate room}. 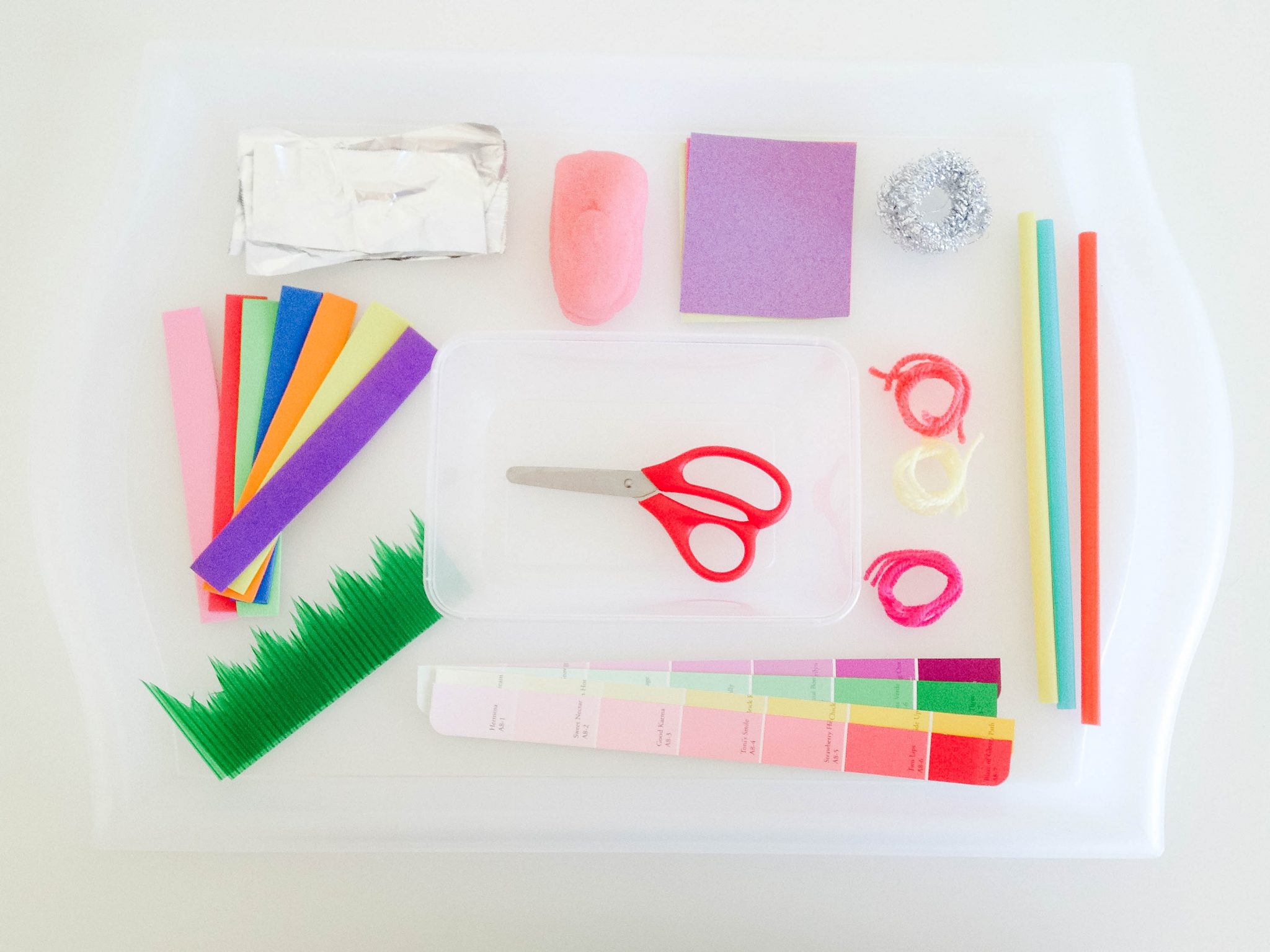 It’s the simplest thing ever, but it’s the first activity to keep her truly engaged and independent for 35 minutes {plus} since arriving in Kuwait, and for that, I’m thankful! 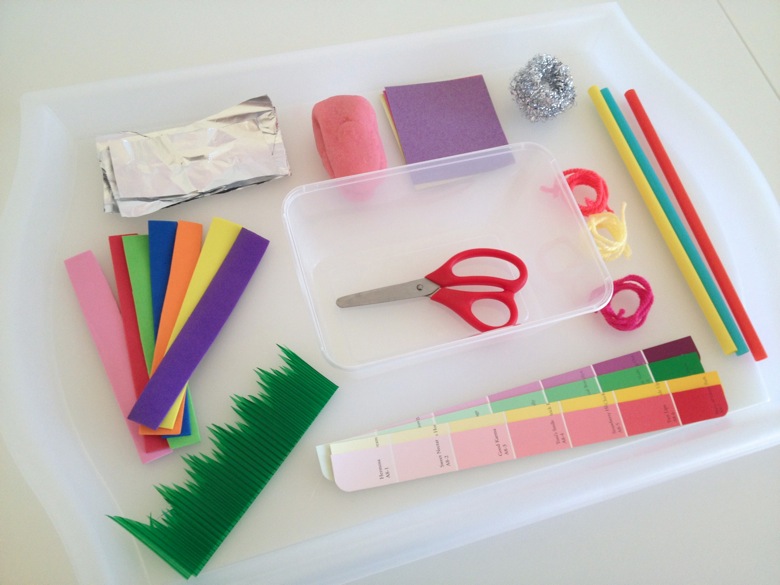 Cutting trays are honestly the easiest thing ever, and they’re great not only for developing scissor skills, but also for developing hand muscles and hand-eye coordination too. I used to set out cutting trays as a centre in my Kindergarten classroom, and without fail, it was always a hit, even when up against building blocks, dress-up, painting, and house.  On today’s tray, I included some foam strips that were left over from a previous project, some little rectangles of foil, a chunk of play dough, some construction paper scraps, some sparkly garland I picked up from Ikea’s AS-IS section for next to nothing, some scraps of yarn, straws our housekeeper washes and stashes away, strips of paint chips, and some plastic sushi grass. Of course you can use whatever you have on hand – no need to buy anything special for this…  In fact, the recycling bin is a great place to search for cuttable materials. 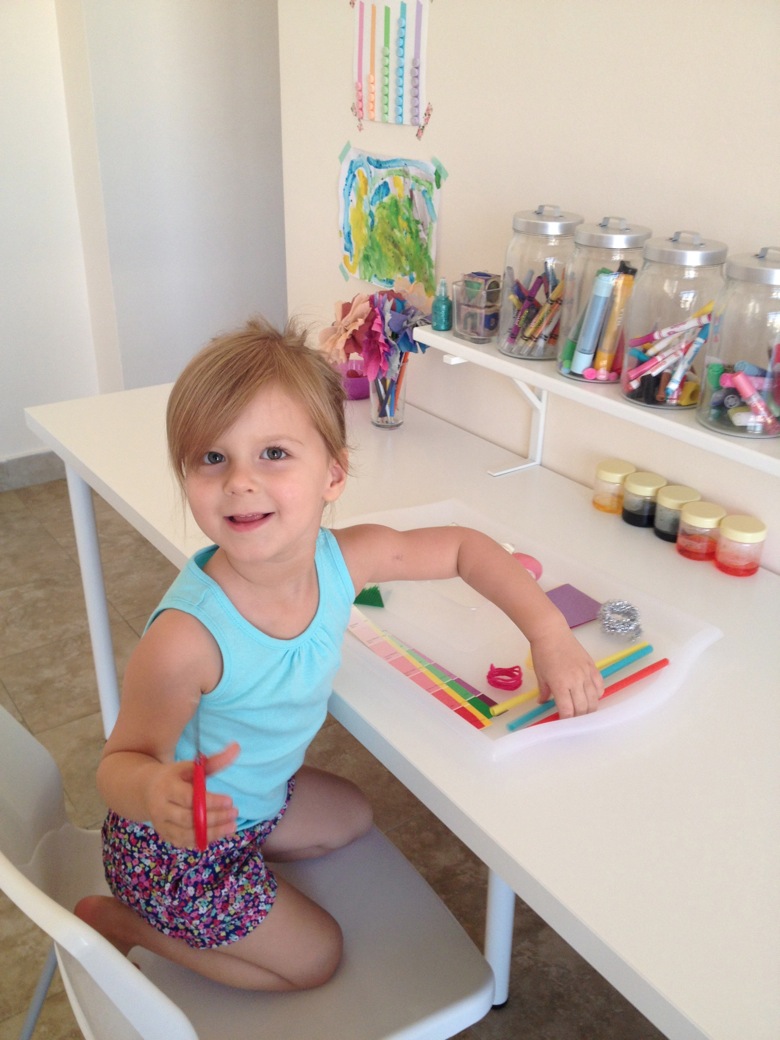 When I invited Miss G to play, she asked if I was sure that she could cut everything on the tray before diving in. 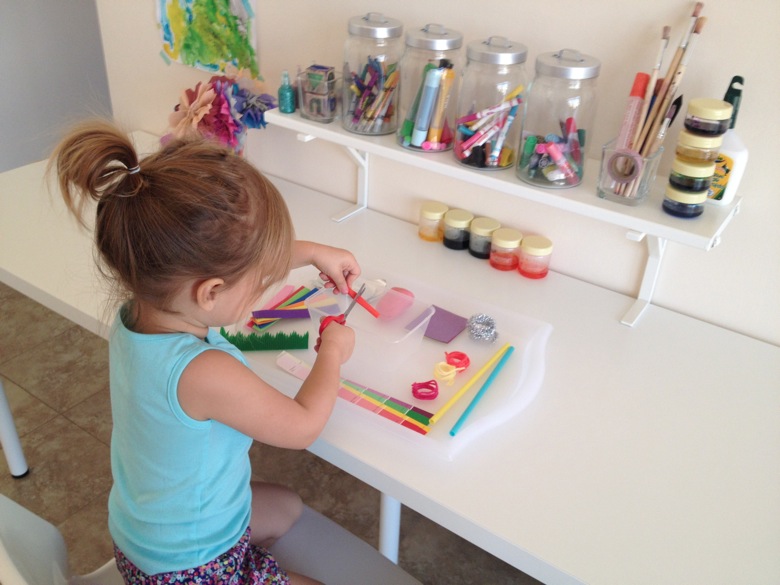 The first thing she went for was the straws, which actually turned out to be the most difficult to cut.  I stood back really hoping that she wouldn’t get frustrated and abandon the activity in exchange for coming into the kitchen and washing dishes with me, and she didn’t! 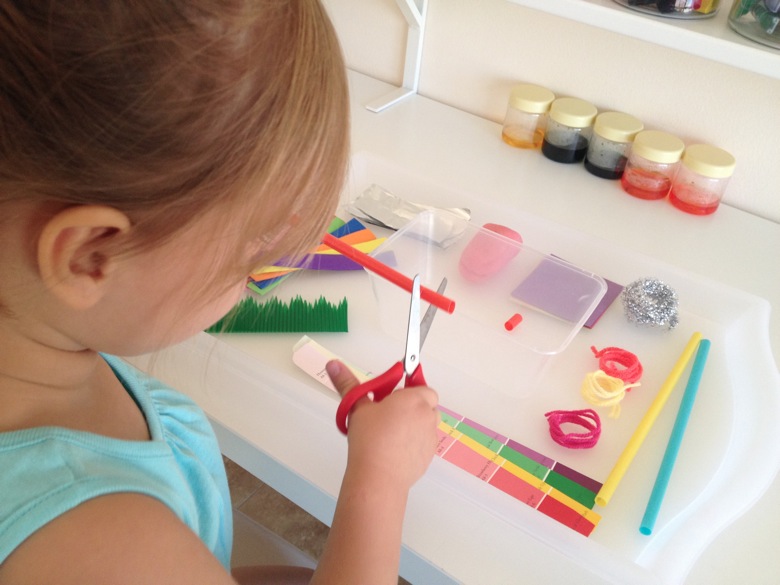 After many tries, she figured out that if she opened the scissors really wide and put the straws as far back into the ‘v’ as she could, they were much easier to cut – problem solved!

Side note:  G’s already a pretty experienced scissor user, but for beginners, I love using the scissors that pop back open after each snip.  I’ve used them with many of my Kindy kiddos who have needed a bit of extra support and G actually started out with them too…  They just make using scissors a tiny bit easier, which is fantastic for  little ones who are  just learning / still developing their hand muscles.  Here are the two kinds I’ve used and liked: 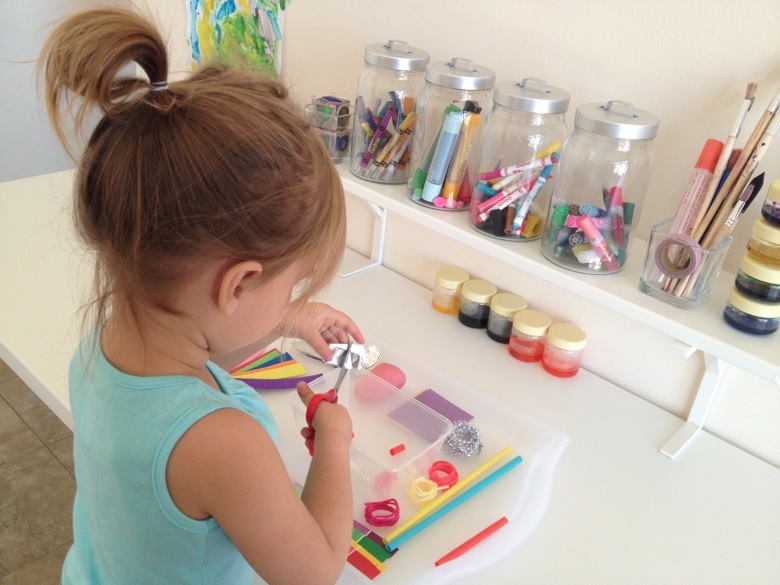 Next it was onto the foil, which she really liked cutting because of the crinkling sound it made as she handled it.  With her happily engaged, I snuck off to power through some dishes and only popped back out of the kitchen every once and a while to quietly snap a few photos. 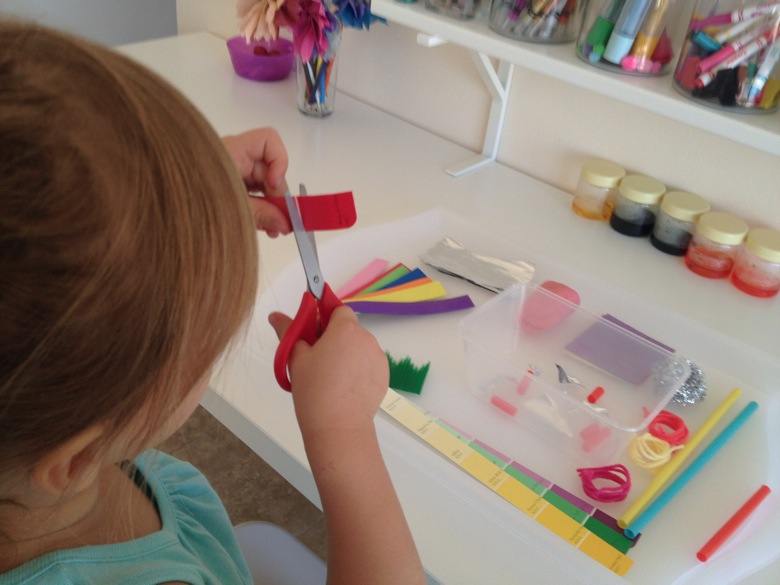 Even though Grae’s done a lot of cutting in the past, today was the first time she’s cut paint chips {mostly because I usually hoard them for craft projects} and I loved that she used the white lines between the different colours as cutting guides without any prompting to do so. 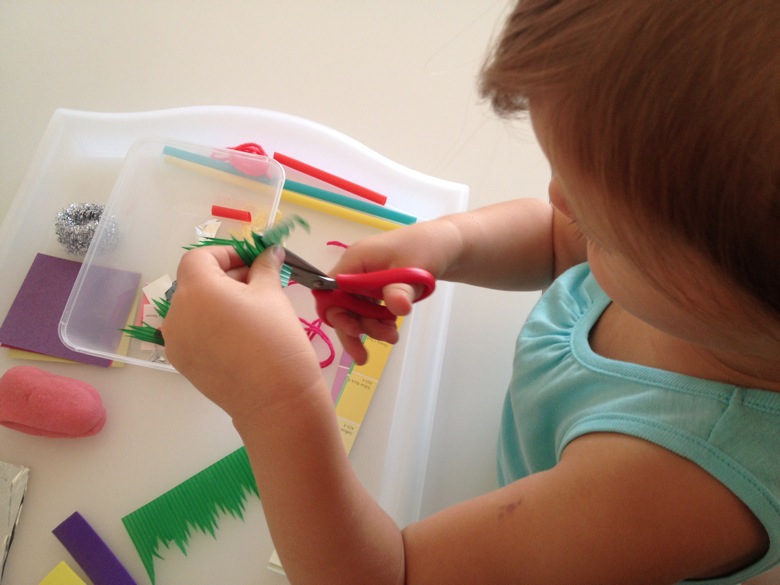 Then it was on to the plastic sushi grass…  Gracen thought this was the silliest of all of the materials and again, used the vertical lines as cutting guides. 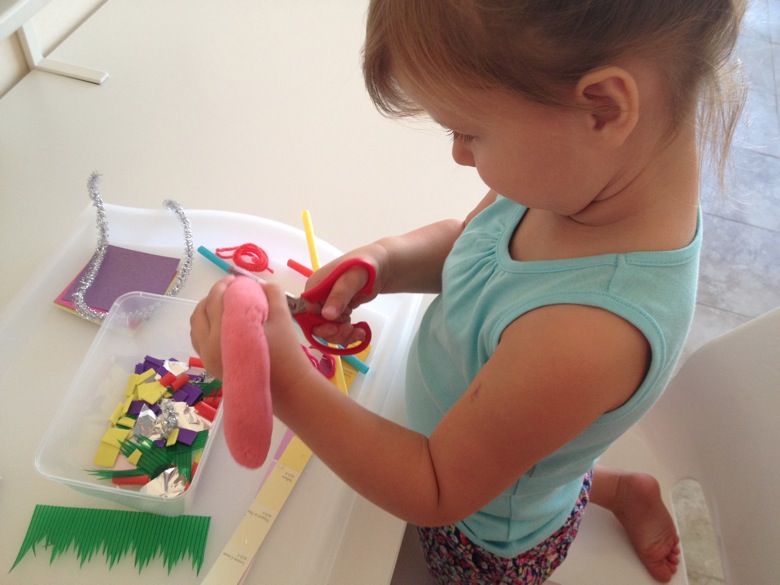 Cutting play dough has always been a favourite activity of ours, so Miss G knew just what to do.  Before starting, she rolled it into a ‘snake’ of sorts, and then chopped off big chunks letting them plunk into the container. 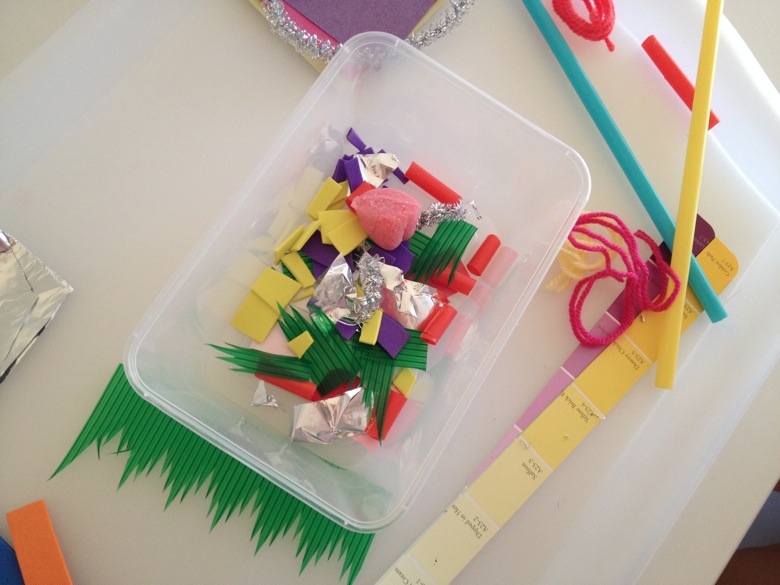 Before long, she had quite the collection of chopped bits. 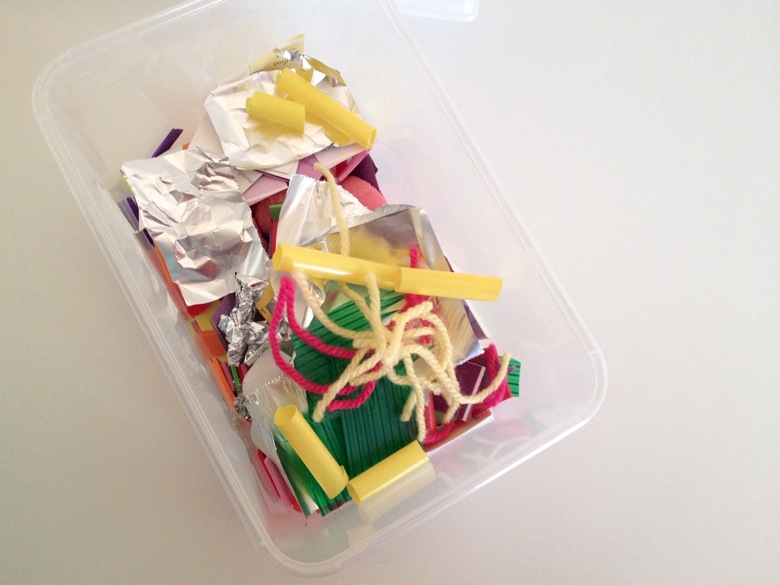 She continued working away on her cutting {completely independently} for over 35 minutes, only coming into the kitchen to show me this… 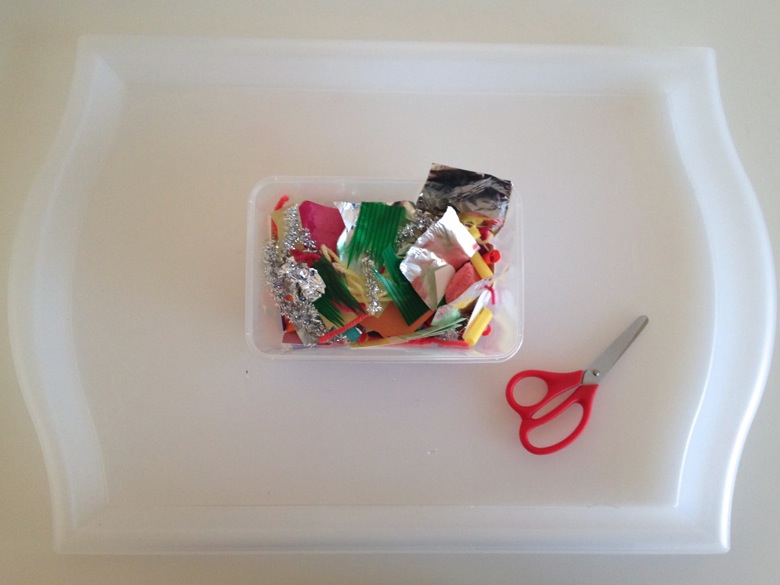 She’d chopped every single item on the tray until there was nothing left.  And even then, she went back into the container, retrieved some of the bigger bits, and chopped them some more – ha!

As for what we’re going to do with all of these bits and bobs, the play dough has already been put back in its bag, and I’m thinking we may use the rest for some sort of mosaic art, but we shall see!  What matters most to me is that she adored the activity and happily played on her own for quite a while – a step in the right direction.

For more cutting fun, check out these posts from around the web:

9 thoughts on “Developing Scissor Skills with a Cutting Tray”