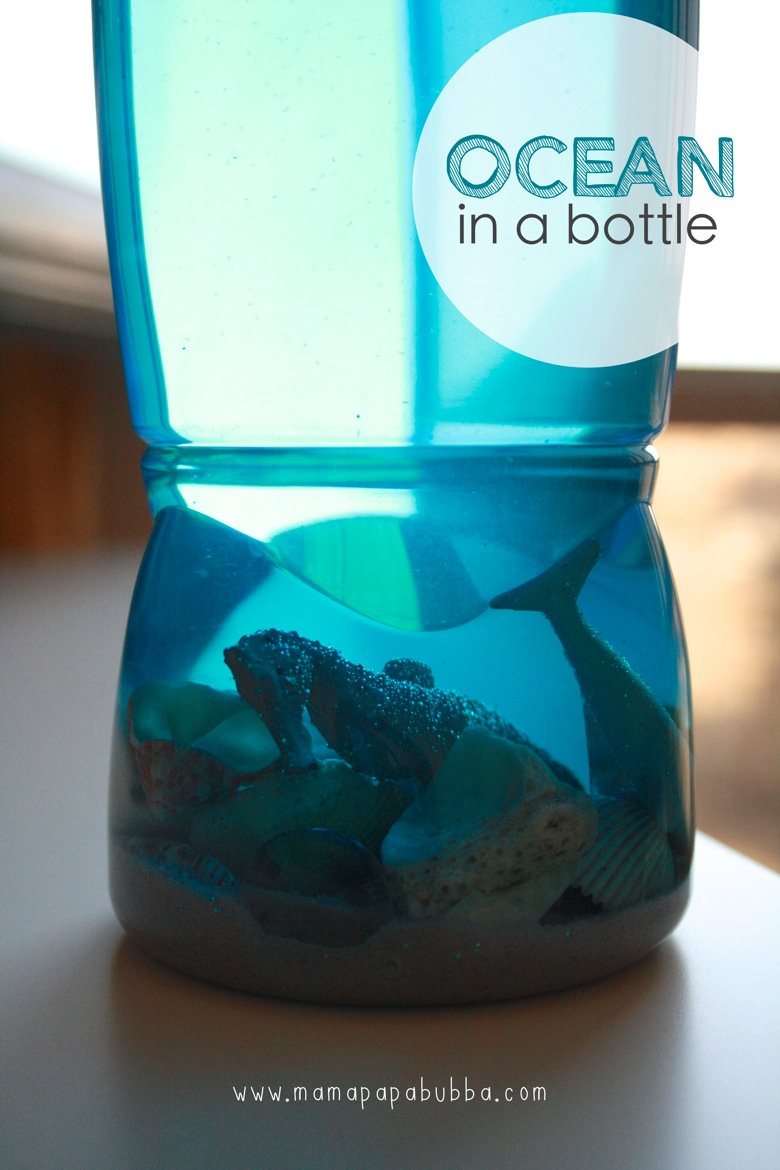 On Wednesday afternoons, Miss G and I are lucky enough to have one of her little friends join us for some afternoon play.  While they happily engage in their own games and play for part of the time, I also like having a couple of fun invitations to play and / or create out for them to explore if the choose to.  When I asked Grae if she had any activity ideas for our play date, she suggested that we play with the ocean items we collected at the beach last weekend.  That was that – an ocean-themed day it was!

Since recycling doesn’t happen in our neighbourhood, I tend hang onto loads of recyclables with the goal of using them in our activities and projects, and as soon as I spotted 2 identical milk containers, I knew just what we could do – an ocean in a bottle project! 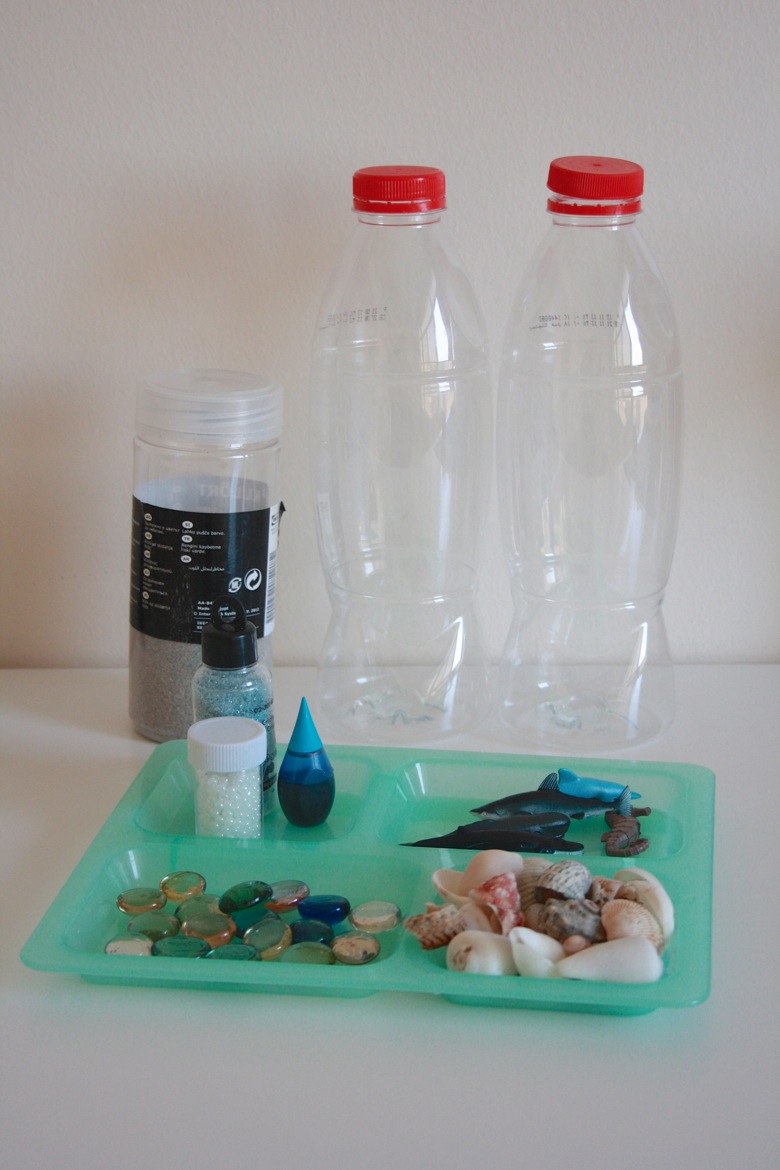 Here are the goodies I had set out for the munchkins to use…  The bottles, play sand, light blue glitter, small pearl beads, neon blue food colouring, glass gems, seashells, and some ocean ‘miniatures’, as Grae calls them. 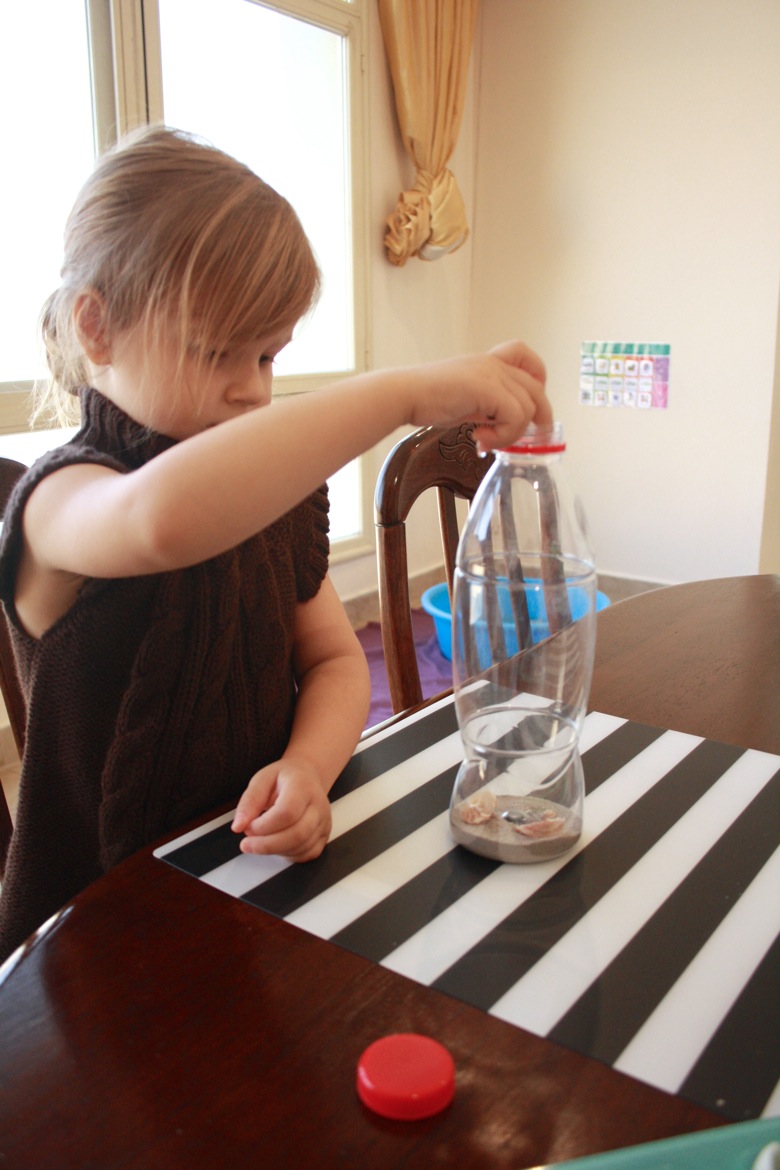 After a few minutes’ play, both munchkins were eager to create their own ocean, so we got started.  Using a funnel, they poured some sand into their containers, and then carefully started selecting their favourite shells to add to the mix. 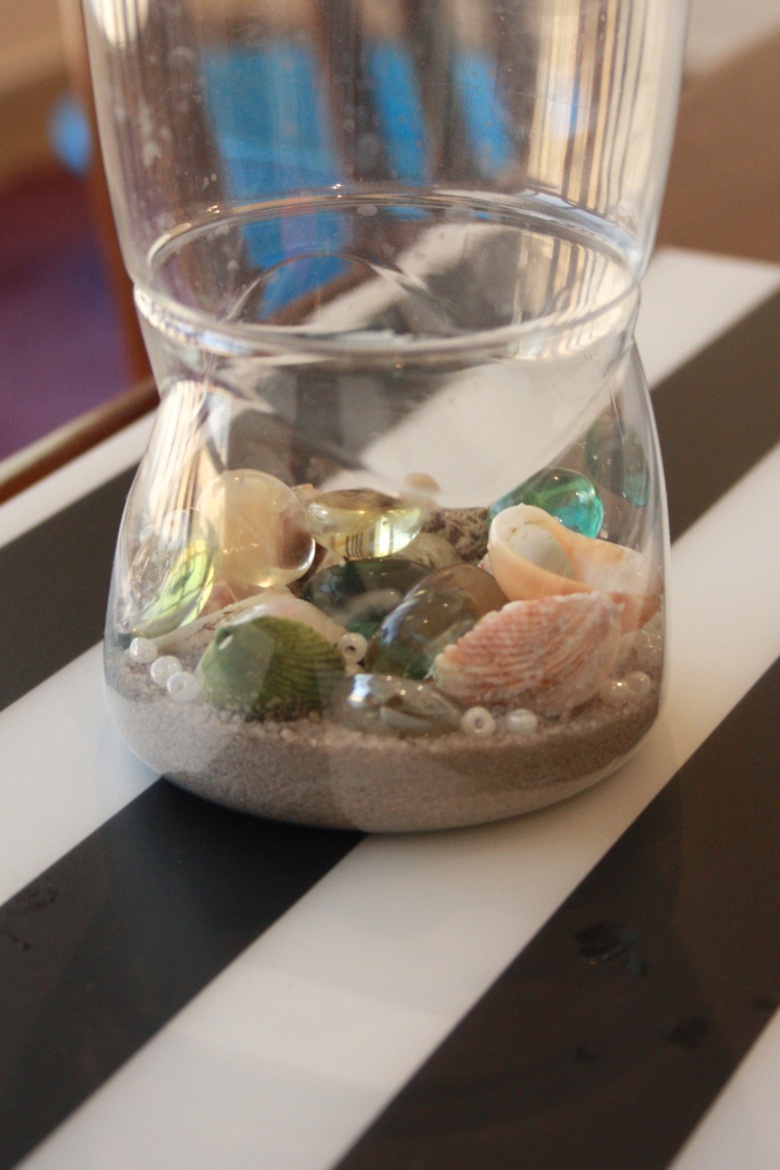 Then they added some glass gems and pearl beads to their ocean floor.  Now obviously these exact items are not found in the ocean, but we were trying to create the feel of the ocean more than a scientifically correct representation. 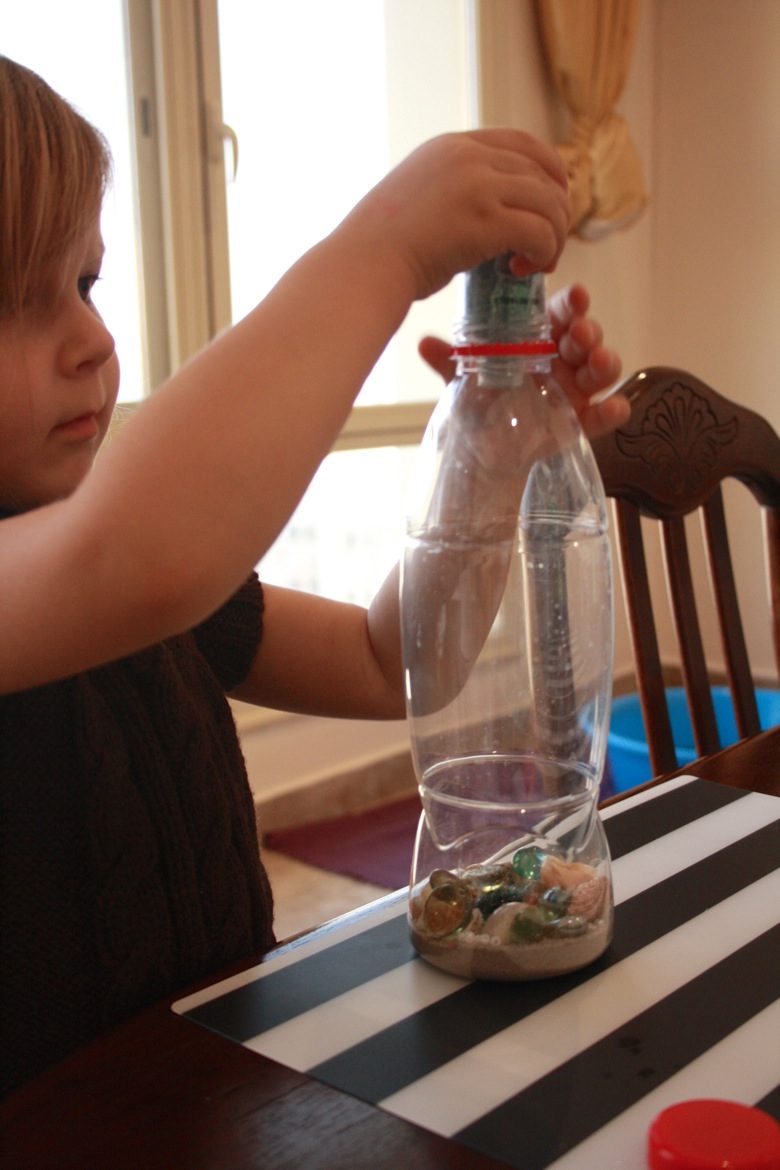 And because Gracen loves watching the ocean’s surface sparkle in the sun, we also added a few little shakes of glitter just for fun. 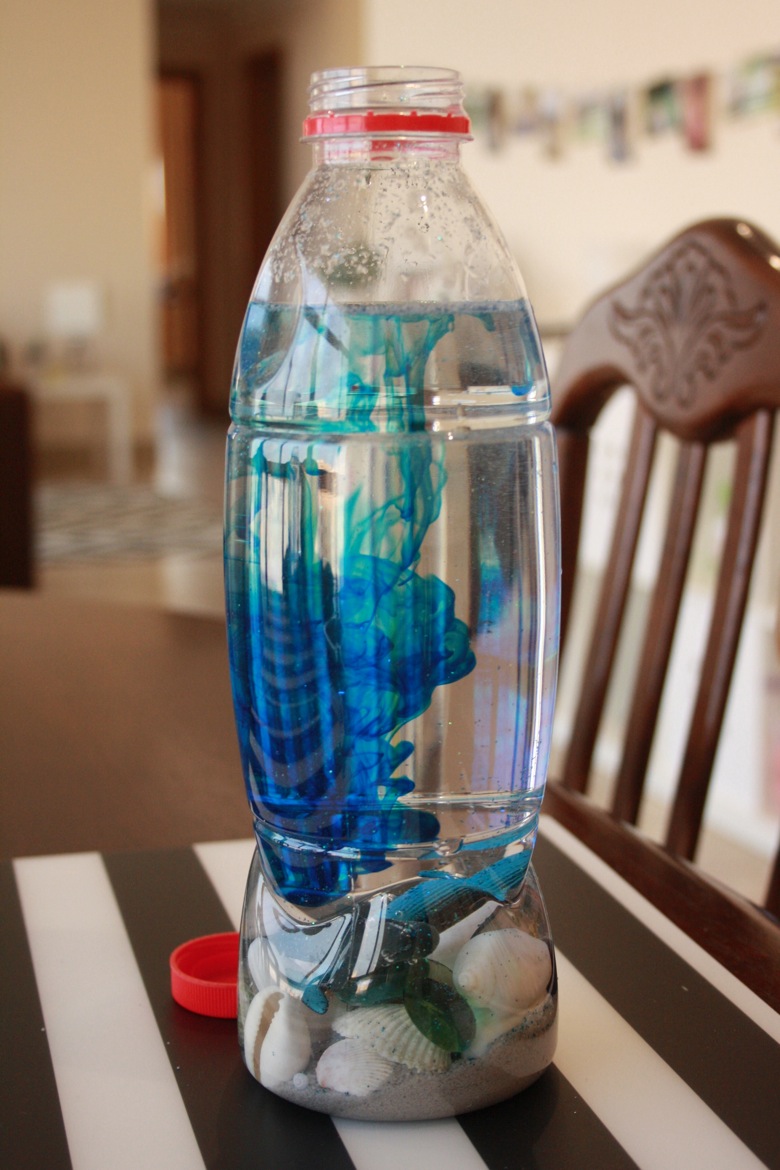 Then each of the kiddos filled their containers up with water, selected a couple of ocean creatures to inhabit their mini ocean, and added 1 drop of blue food colouring as a final touch {watching the colouring disperse  was definitely a highlight}. 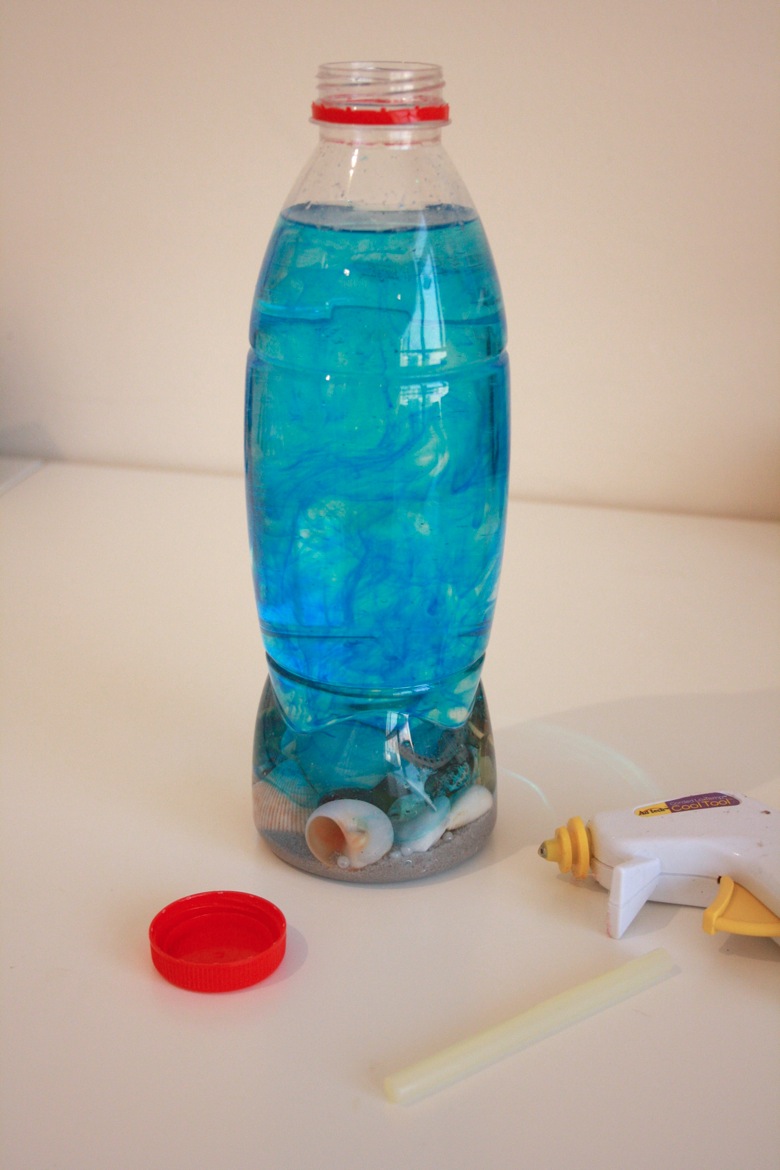 With our oceans complete, it was time for me to seal the bottles up.  Using my glue gun, I ran a quick strip of glue around the inside edge of the lids, and then very quickly screwed them on before the glue set.  I tested them out and the lids do seem very secure, but I’ll probably check them every once and a while just to make sure that doesn’t change. 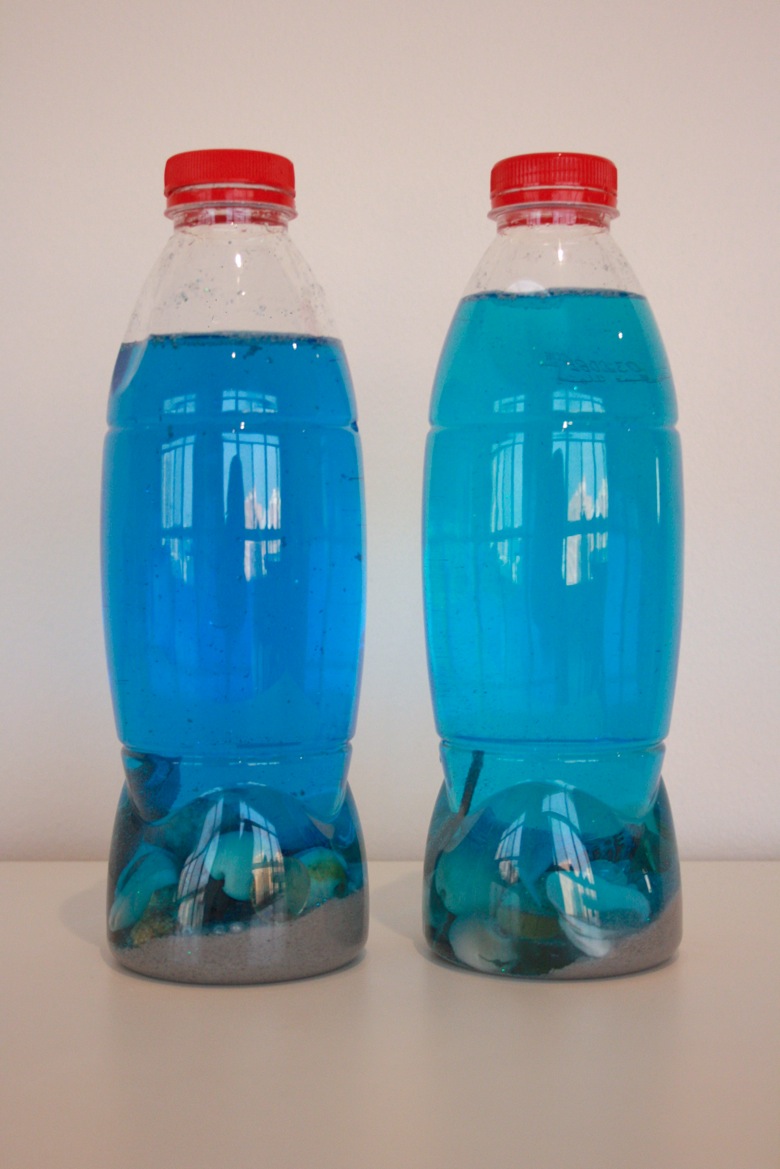 Here they are complete.  Pretty, right? 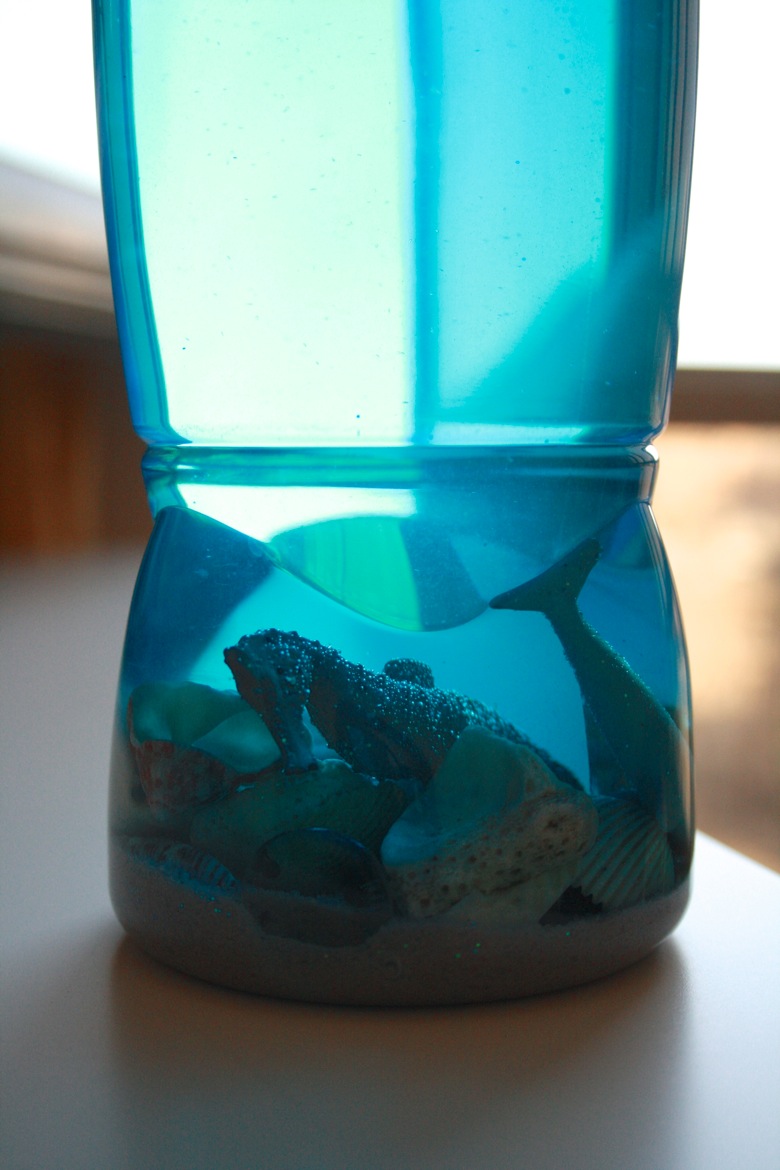 Both kids were proud of their creations and carried around their ocean bottles for the remainder of the afternoon, shaking them, rolling them, and making their creatures ‘swim’ and dive every now and then. 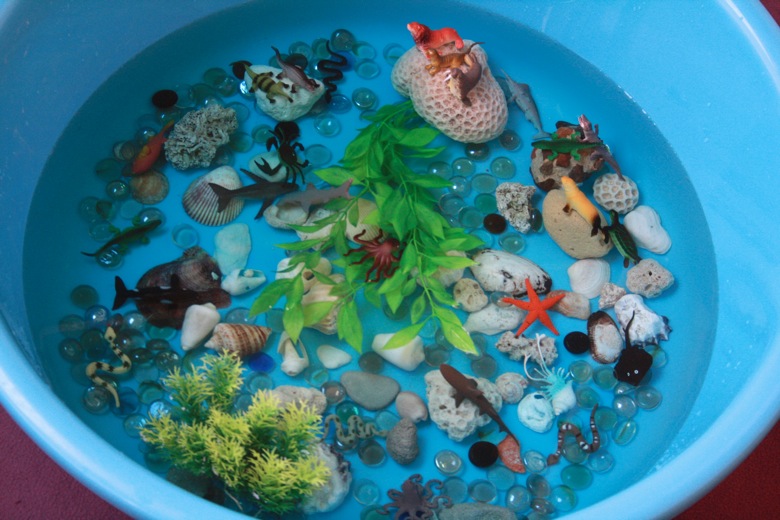 Then it was off to play in the ocean sensory bin Miss G and I had prepared earlier in the day using a combination of items found at the beach and things purchased at City Star and The Scientific Centre. 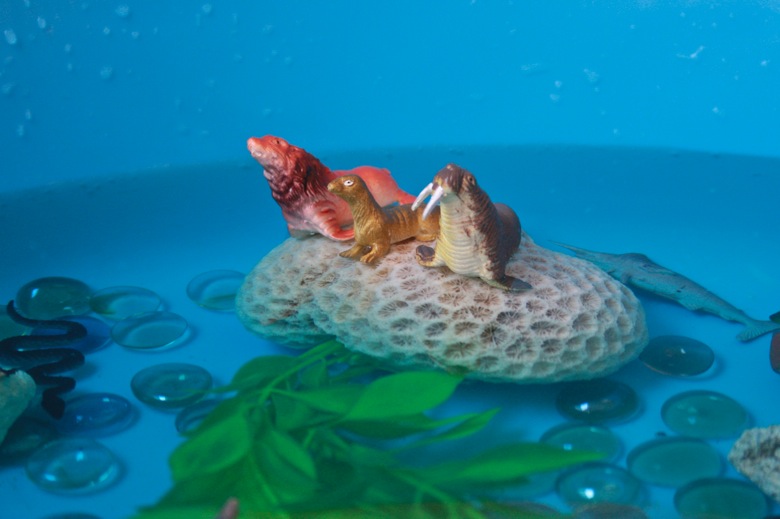 While back home we’re pretty loyal to the awesome Safari Toob creatures, here in Kuwait, The Scientific Centre has a very decent selection of good quality animals, these guys included. 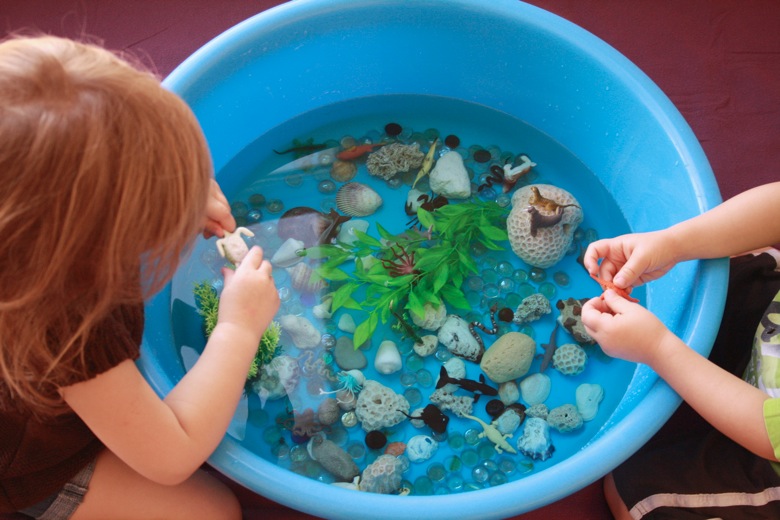 It was so much fun to sort of sit back and watch these two discuss ocean creatures, their key features, and what was happening in their ocean play-by-play style.  I’m looking forward to more fun next week!

See more of our fun ocean themed bath too!