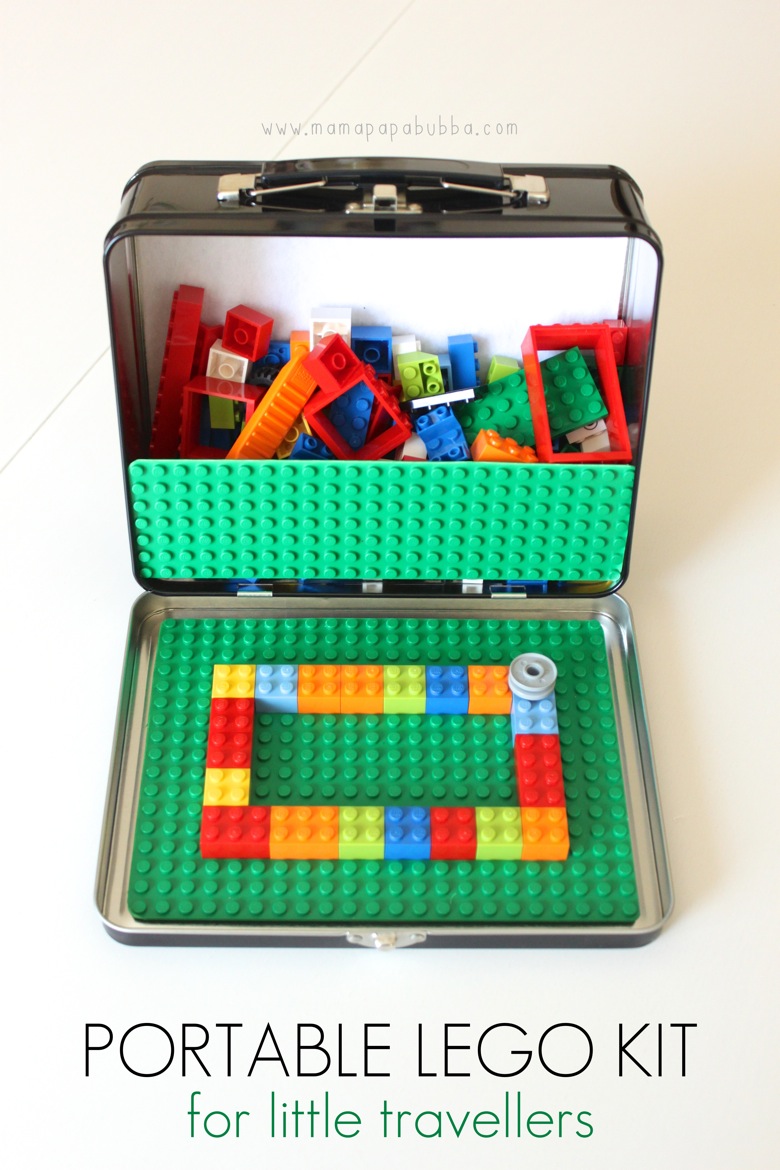 Gracen’s little weekly play date buddy turned 4 today, which called for another homemade gift.  Like almost all of our expat friends here in Kuwait, he and his family will be headed home for the summer shortly, so we wanted to make him something he could easily take along and hopefully use during the journey back to Canada.  Since he and Miss G play with LEGO pretty much every time they’re  together, we figured a portable LEGO kit would make a great gift. 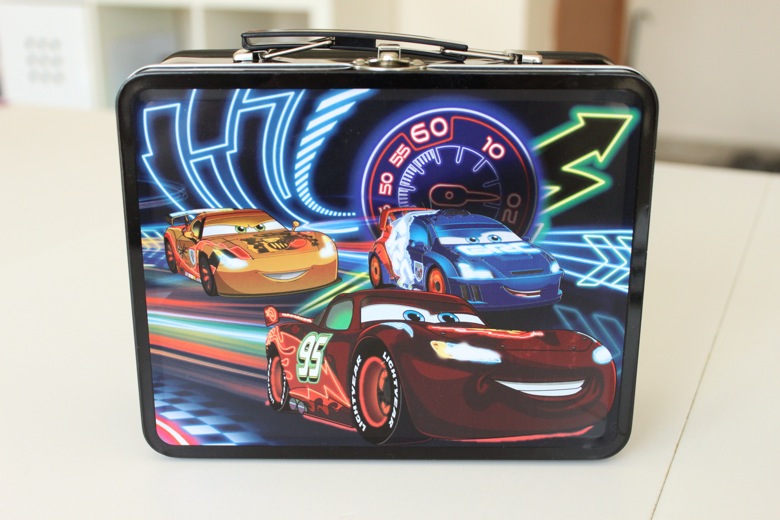 I had lots of different ideas about how we could put one together, but when Grae and I spotted this old school metal lunchbox in H&M a few weekends ago, I immediately remembered the LEGO lunchboxes I saw on If Only They Would Nap last Christmas.  I knew I wanted to put ours together a little differently, but overall, a portable LEGO kit in a lunchbox is what we would make.

Besides the metal lunchbox, we collected a large LEGO building plate, some good scissors, a sanding sponge, some mounting squares, a piece of thick white felt, our favourite ever craft glue, and a bin of basic LEGO bricks.  Then it was time to get started.  Since Gracen was at summer camp this morning, I did the majority of the project on my own which made it super quick, but had she been home, there would have been plenty of jobs for her to help with. 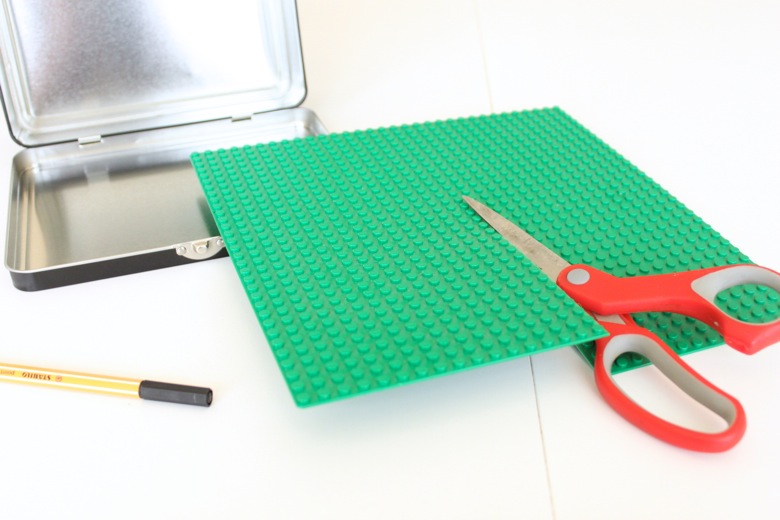 First, a cut the building plate down to fit in the lunchbox’s lid.  I was a little worried about how it would cut, but it actually wasn’t too hard at all.  I just went nice and slow, concentrating on cutting as straight as possible. 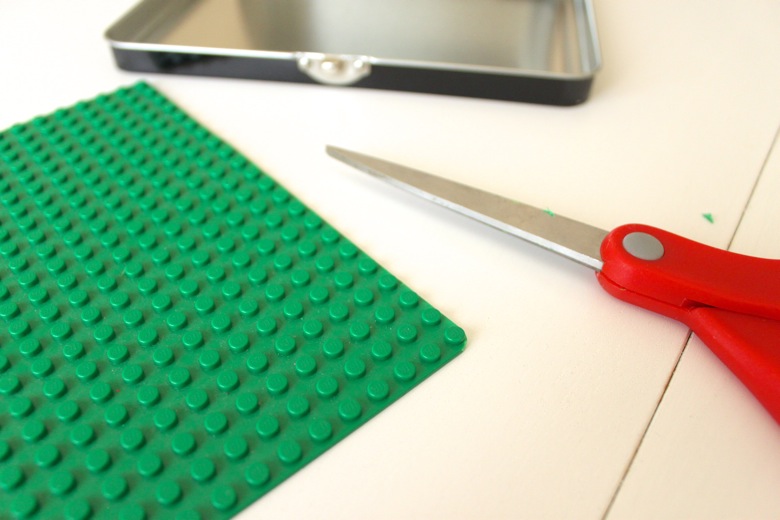 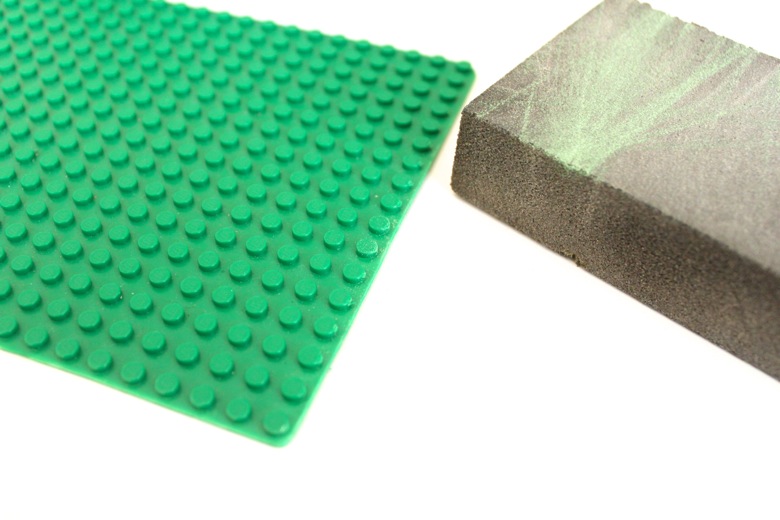 Next, I trimmed the corners to make them rounded and sanded both the corners and the cut edges to ensure that they were smooth. 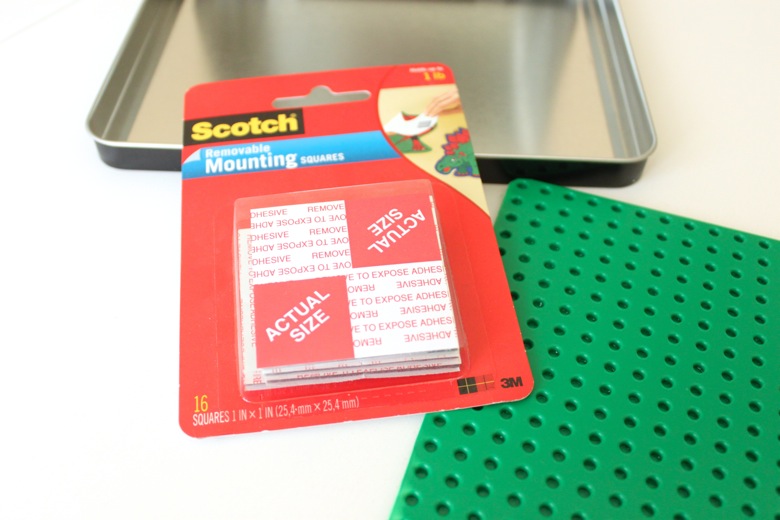 When it came to adhering the base plate to the lunch kit, I wasn’t sure what to do at first.  I did go and check out several glues, but the few that I thought would hold had nasty warnings of cancer and toxins and poisoning on the bottles – obviously not something I wanted to use for a kid’s gift.  After giving it some thought, I decided to use mounting squares instead.  I use them to hang all sorts of things around the house instead of drilling holes into our concrete walls, and they hold really well. Plus they are removable should Miss G’s little friend ever want to remove the building plate from the lunchbox and use the two pieces separately. 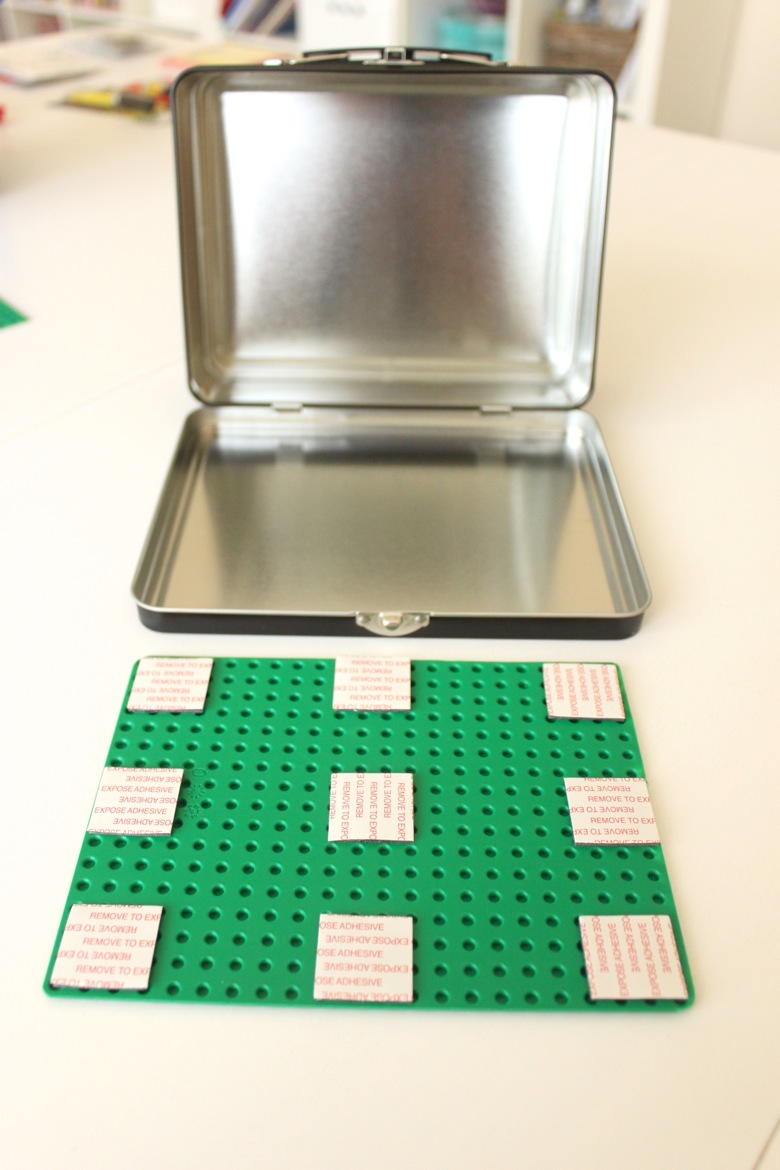 I probably didn’t need this many, but I decided to be safe rather than sorry and applied 9 mounting squares to the base plate, pressing each one down well to ensure a good stick. 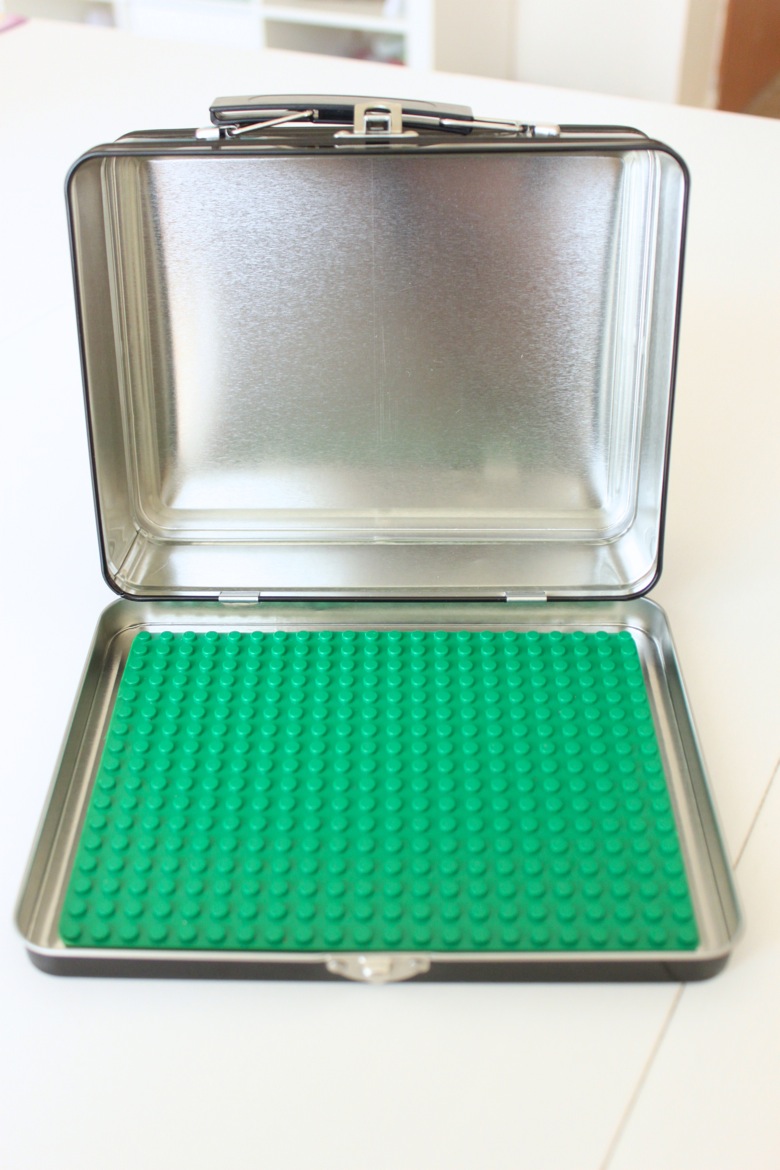 I then removed the paper backings and carefully centred the plate inside the lunchbox’s lid, once again pressing it down firmly to ensure a good hold. 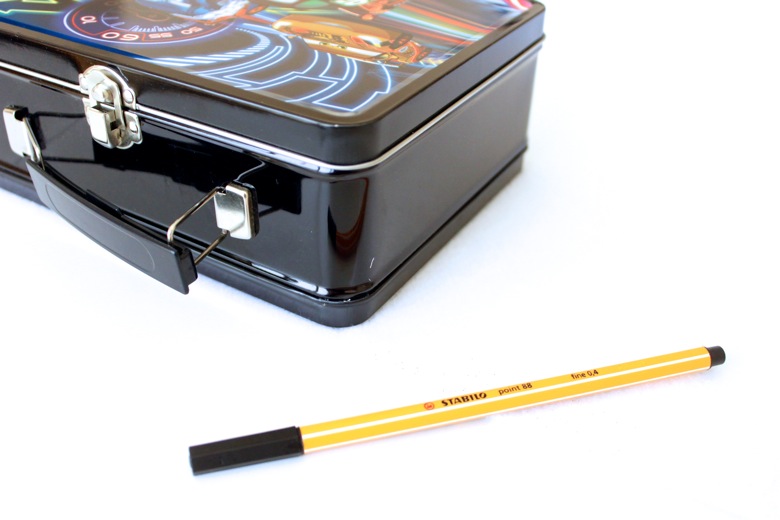 Next, I laid the lunchbox onto a large piece of white felt and traced around it.  Using a sharp pair of scissors, I cut just inside the line I’d drawn to make the felt piece a little bit smaller than the box. 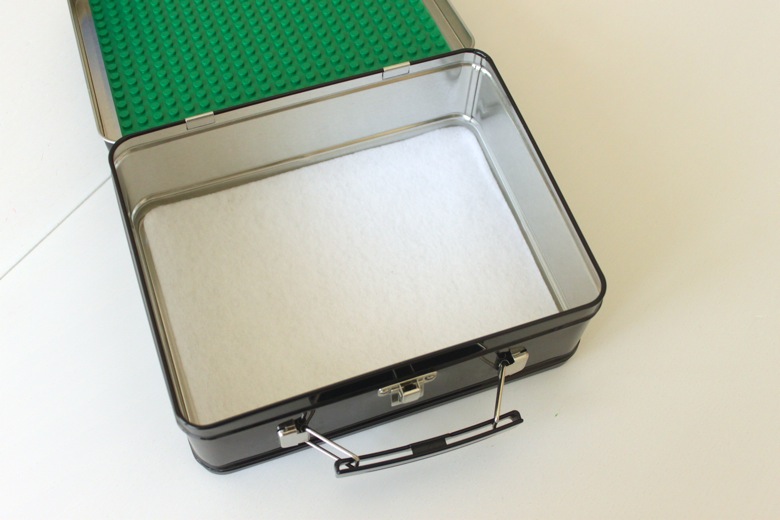 I then adhered the felt to the bottom of the lunch kit using a very thin layer of Aleene’s Tacky Glue.  The hope is that the felt layer will cut down on some of the noise created by the LEGO bricks clanging against the metal. 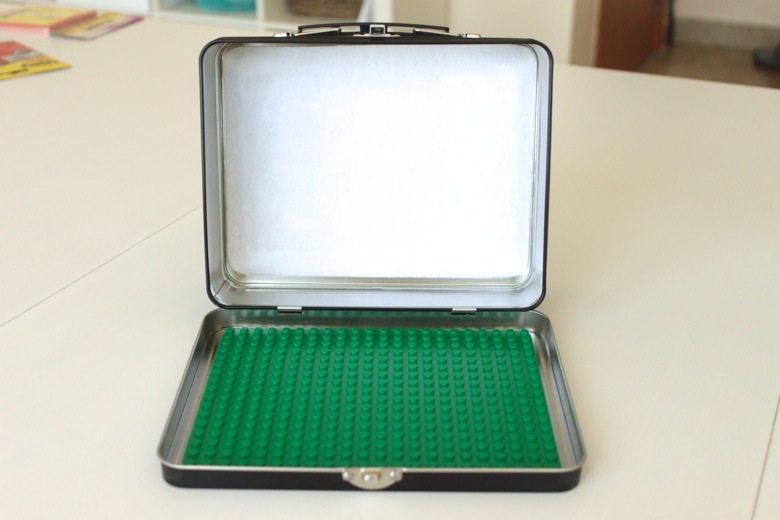 While I did seriously consider cutting out another strip of felt to line the sides of the box, I ended up just leaving it as is. 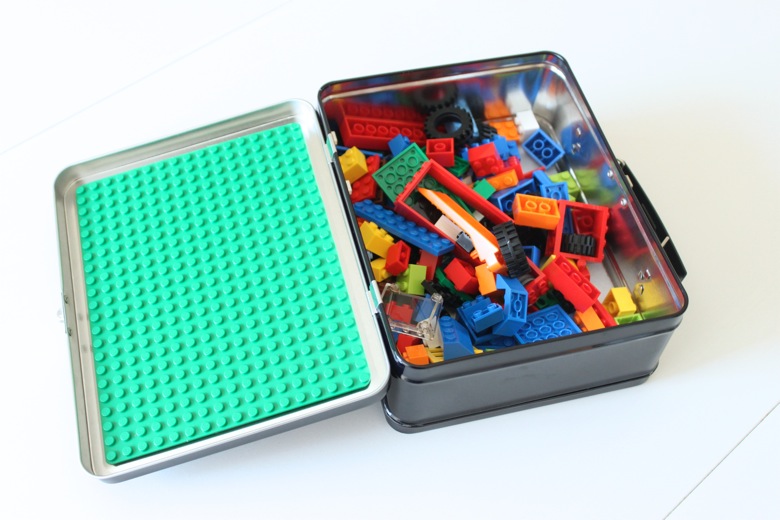 After a little bit of drying time, I dumped the entire contents of the bin of LEGO pieces into the lunch kit {sort of deflating to see how little actually comes in one of those big bins, isn’t it?!} I could have left the kit like this, but I didn’t like the fact that the building would have to take place on the sloped lid in order to keep all of the LEGO bricks in the main part of the lunch kit.  I tried a few things {none of which worked well}, and finally settled on creating a little ‘fence’. 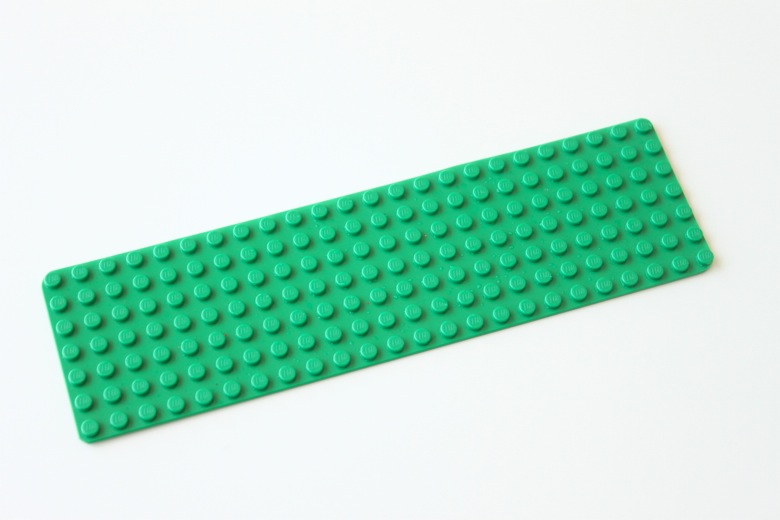 I still had  plenty of my base plate left, so I cut out a thin piece to fit across the width of the lunchbox, trimming the corners and sanding the edges just as before. 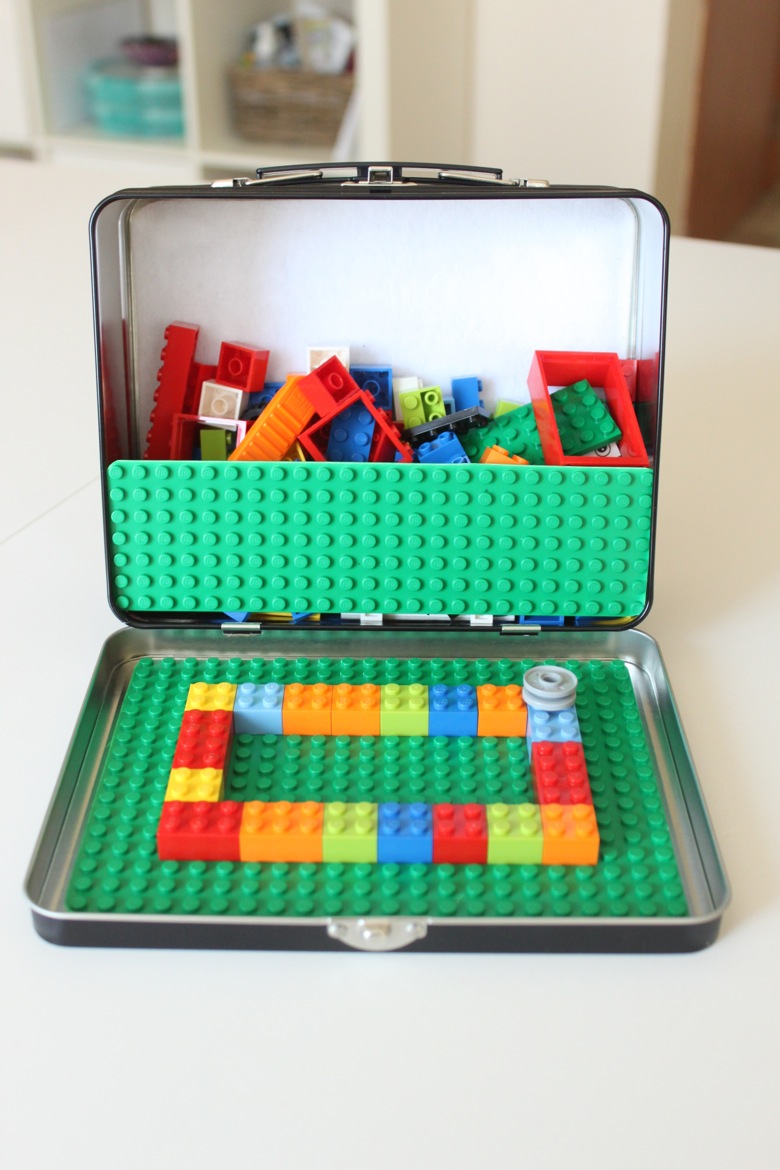 Then I simply placed the new plate piece into the bottom part of the lunch kit when it was lying down and gently tilted it upwards so that the lid was flat against the table.  Sure enough, the LEGO fence worked exactly as I hoped it would.  The little ridge around the edge of the lunchbox kept it in place and held the pieces in place as we built below.  Of course, you could also just use the ‘fence’ piece for building on too if you prefer. 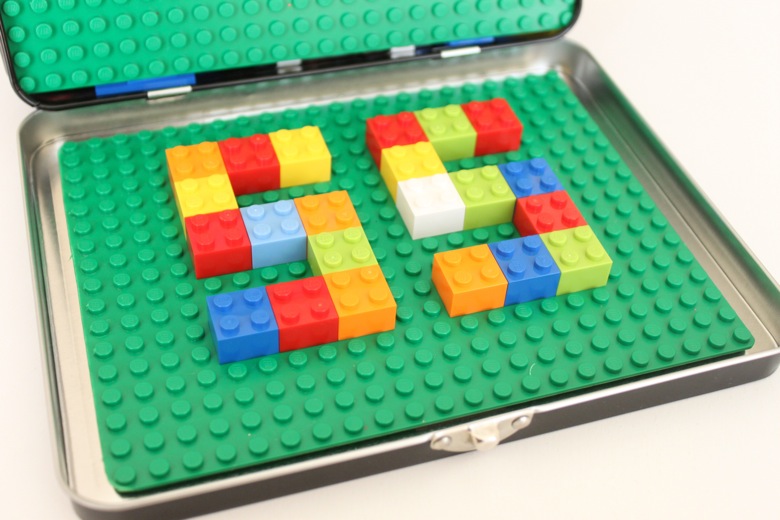 Just for fun, we decided to create the birthday boy’s initials on the building plate so he’d have a little surprise when it opened it. 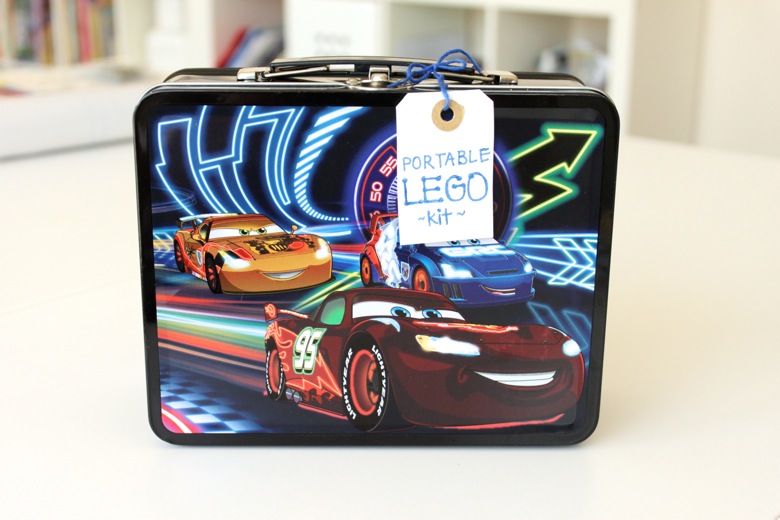 We added a little tag to it like we always do, and it was ready to go. 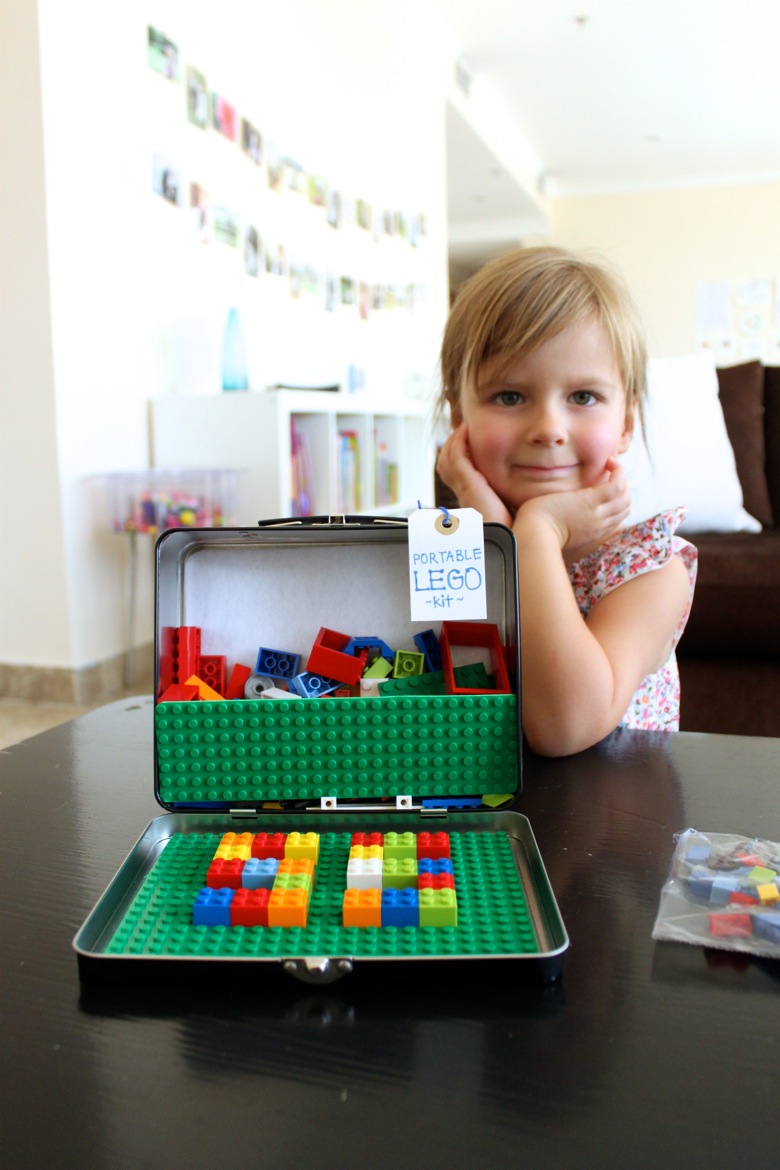 Miss G was very excited to give the birthday boy his gift and now I’m thinking I should probably make another one so we too can build with LEGO during our travels. ☺

Be sure to check out our portable activity kit and our other homemade gifts too!