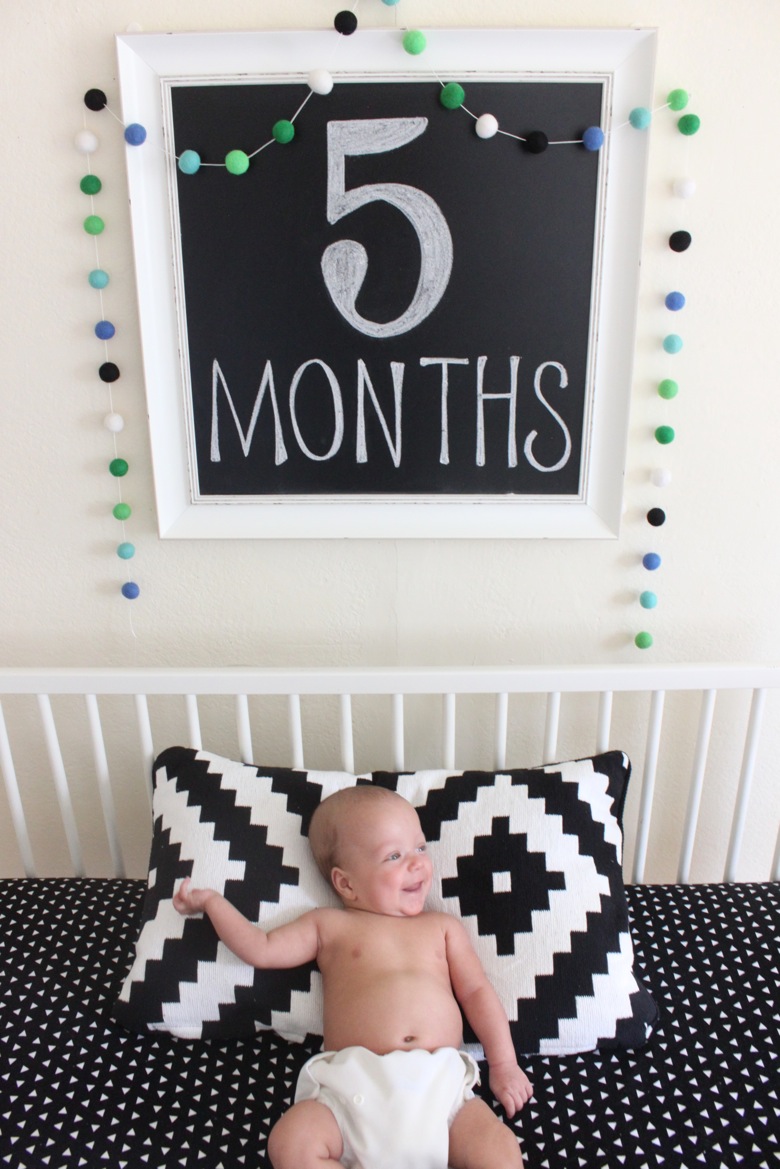 I feel like we’ve had such a big month this month.  First off, we seem to have hit a huge turning point as far as Sam’s overall comfort and happiness is concerned, which has been a total game changer. 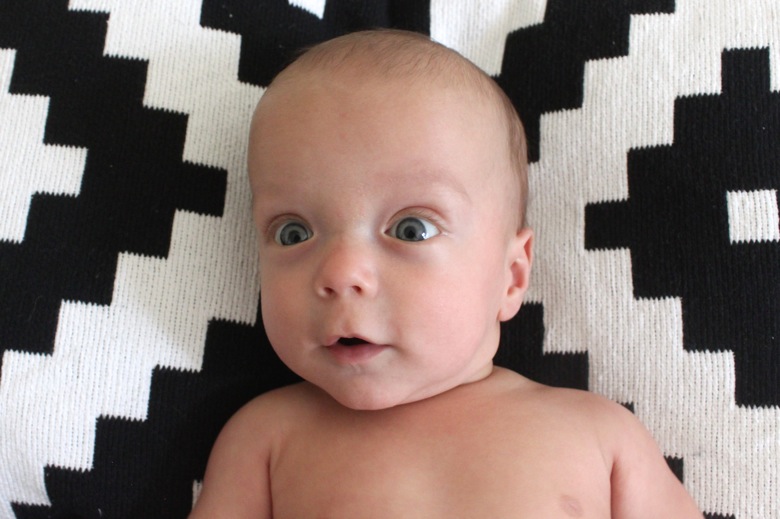 I guess I didn’t come right out an say it, but the first two months that he was home from the NICU were hard.  Like really, really hard.  We were so thankful and thrilled to finally have our baby boy home and would have happily withstood anything {obviously}, but there were many days {well, more than many days, if I’m being totally honest… more like most days} that he screamed and cried and fussed for nearly the entire day.  It was exhausting.  Watching him suffer and not being able to do anything to actually comfort him was awful.  Beyond awful.  It took us ages {and buying every natural ‘remedy’ possible – none of which worked}, but we finally discovered something that seemed to help him a little bit – this sheep {aka, his ‘best friend’}, believe it or not.  It certainly didn’t solve all of our problems, but the heat seemed to soothe his sloshy, gurgling tummy bubbles and bulging hernia a little bit and allowed us to put him down every now and then, which made things easier. 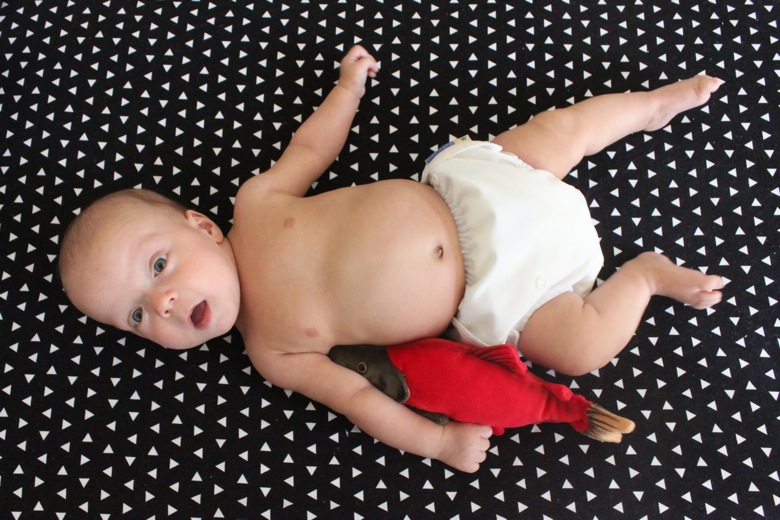 Then one day something changed.  We were packing up our things to go to Whistler for spring break when we suddenly realized that he had quite happily been hanging out, wide awake, without being held for a good part of the day.  There was a moment when Brad and I looked at one another like ‘What the…?!’, but neither of us said anything in fear of jinxing it.  Thinking back, his tummy bubbles hadn’t been audible from across the room for a couple of days and his hernia hadn’t been nearly as bulgy.  I don’t know what changed that day, but he ended up absolutely rocking our first family vacation and has been like a different baby ever since – happy, smiley, and upset only when in need of something.  He still doesn’t do daytime sleep without being held or strolled, but hey – we’ll take what we can get. 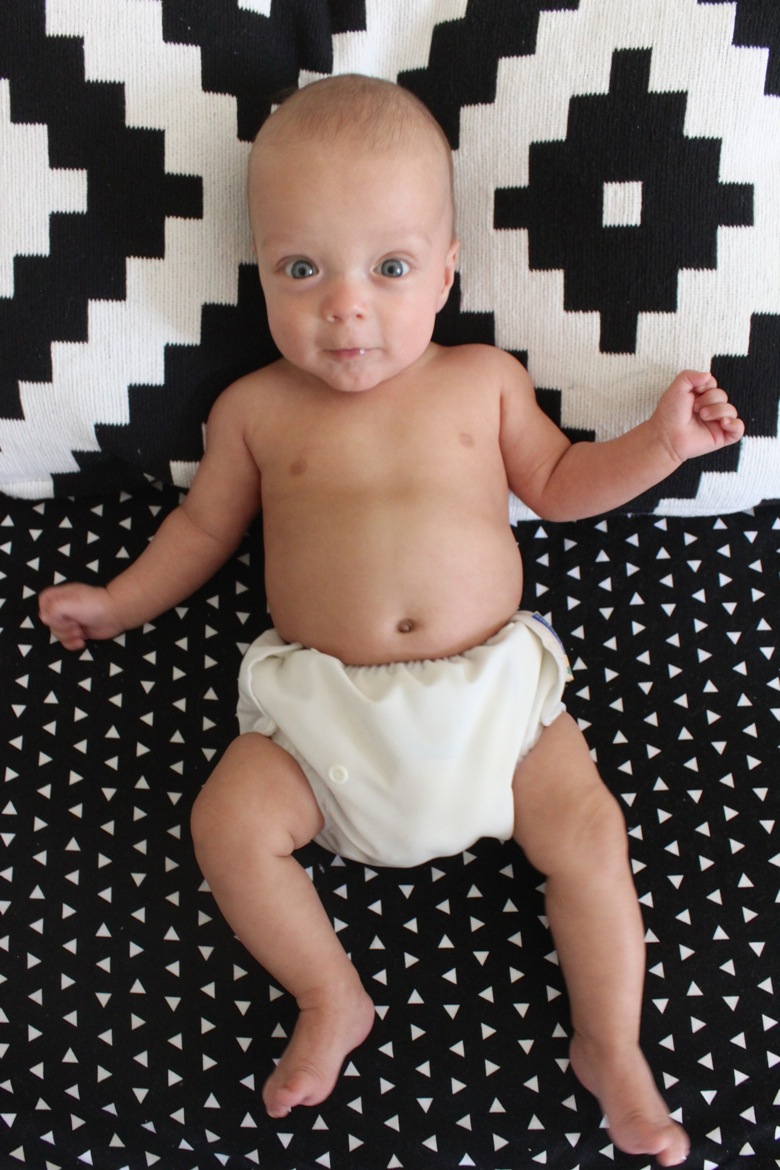 Another big happening for this month was that we had our first IDP {infant development program} visit.  Sam automatically qualifies for the program due to his premature birth, and it’s really nice to know that we’ll have someone checking in for the first while to make sure that his development is on track.  One thing we learned from our consultants is that his growth and development will be tracked based on his corrected age until he’s 30 months old, at which time he is expected to be pretty much ‘caught up’.  I know that the whole age thing can be a little confusing when it comes to preemies, but in the case of our little Sam, he’s currently 5 months old chronologically {based on the date of his actual birth}, and because he was born 3 months early, his corrected age is 2 months old.  So basically, because his first three months of life were spent developing to the point of a typical newborn, we can only now expect his growth and development to be that of a usual 2 month old baby.  {Does that make any sense?  If not, I feel like this document does a better job of explaining.}  Thankfully, he’s more than on track for his corrected age and is actually already meeting several of the milestones that you’d expect from a typical 5 month old, so that’s great news. {#preemiepower!!} 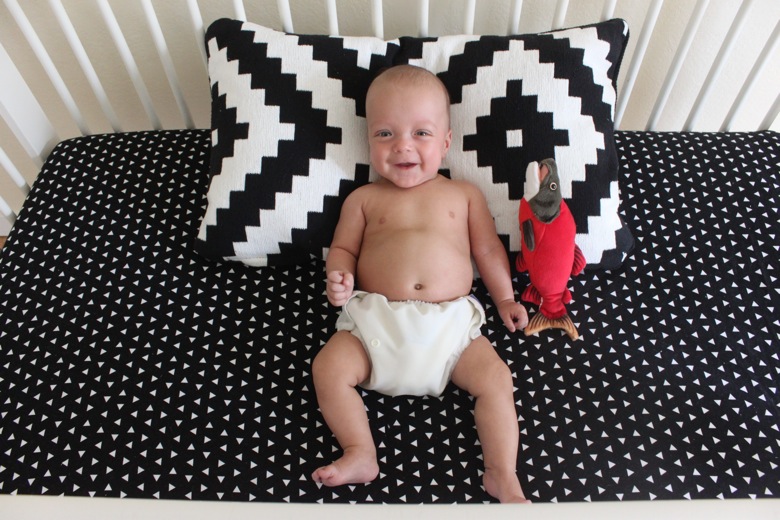 This month Sam and I attended our first local preemie support group {also put on by the IDP} and it was so lovely to connect with other parents who have had very similar experiences.  Bubba was a total rockstar and slept in my arms for our entire 3 hour visit, which meant I got to chat with several other preemie / NICU mamas – win! 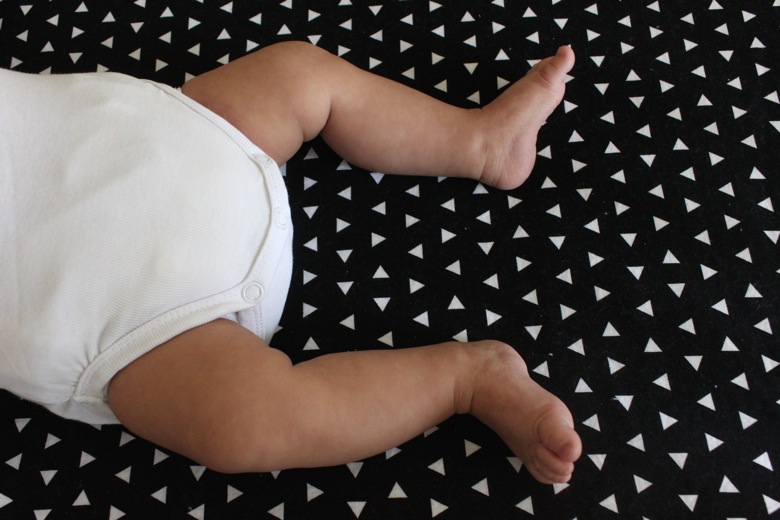 Getting back to the basics, this month this little guy weighed in at 12 and a half pounds and measured 59.5 centimetres, which is nearly 10 pounds and more than 10 centimetres than what he was at birth.  Clothing wise, he’s still wearing 0-3 months, but a few of the smaller pieces are starting to look a little snug and I’m guessing he’ll be able to pull off some of his 3-6 month stuff in a couple of weeks.  As far as diapers go, he got bumped up to a size medium in the cloth diapers provided by our awesome diaper service, Happy Baby Cheeks, and on the odd time when he wears a disposable, he’s still in size 1. 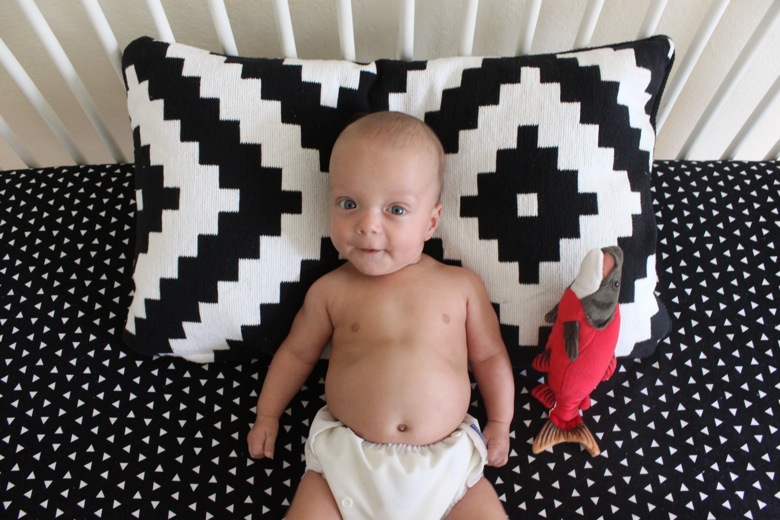 Milestones wise, Sam’s gotten super social this month, which is so much fun and absolutely heart melting at times.  He loves to sit propped up on your knees and chat back and forth with his adorable little sounds, gurgles, and giggles.  He’s also officially found his hands – a great source of entertainment for him now.  He also lights up and smiles at you when you walk into the room now, which is a pretty special feeling. 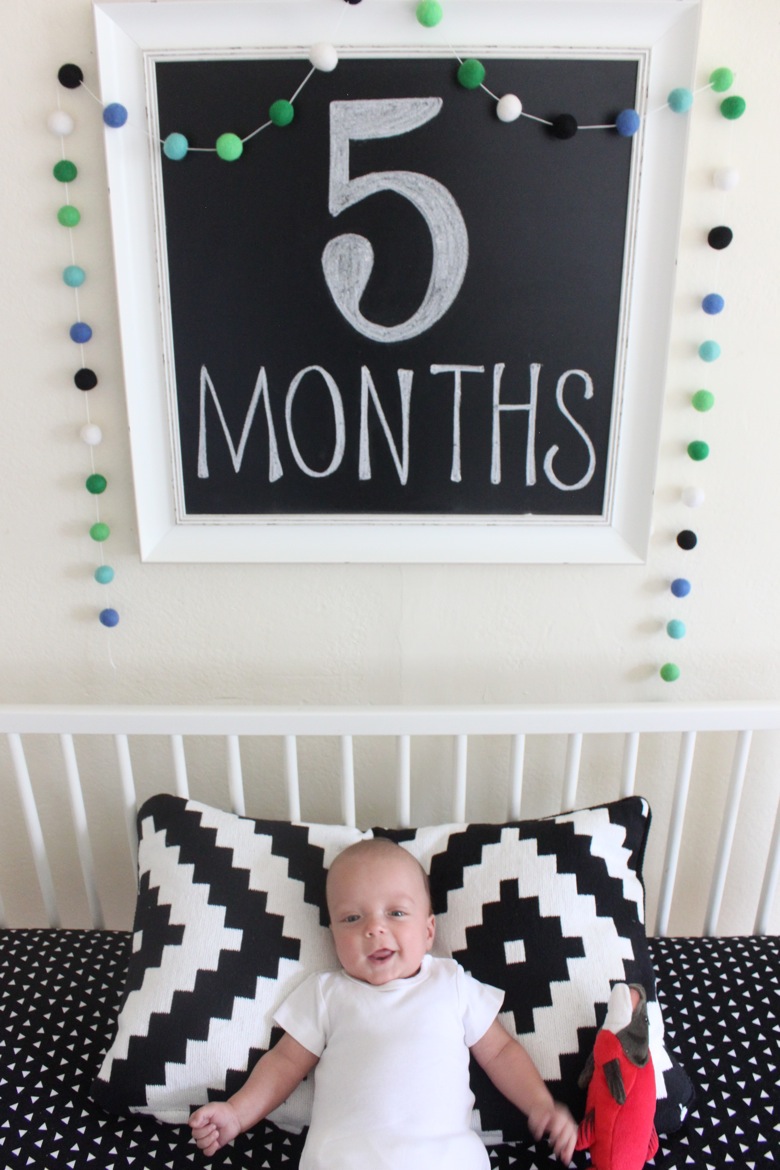 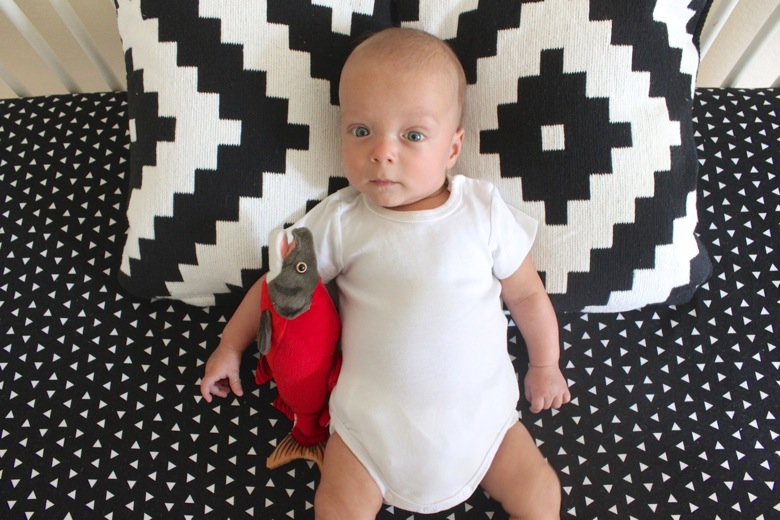 Things he loves?  Water, having baths, light of any sort, highly contrasting colours {just like his mama – black and white for the win!}, moving {always moving – rush hour traffic and red lights are no longer our friends}, his nightly massage and naked time, and his orange paci. 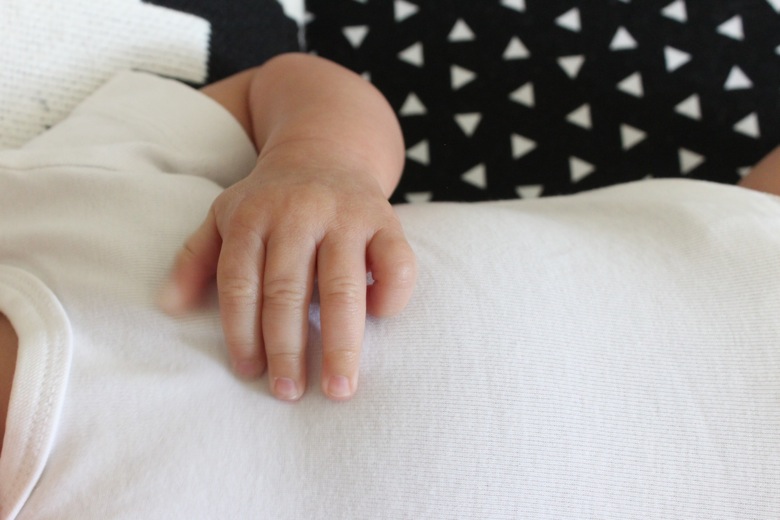 Things he dislikes?  The dark.  Hates it {like a true NICU babe}.  Earlier this month we were at Miss G’s follow-up eye exam and when our optometrist turned out the lights, our happy bubba started absolutely bawling.  Like first real tears and snorting bawling. :/  Turn off the lights when he’s in a room and he’ll do the same thing.  Needless to say, our hallway light stays on all night. 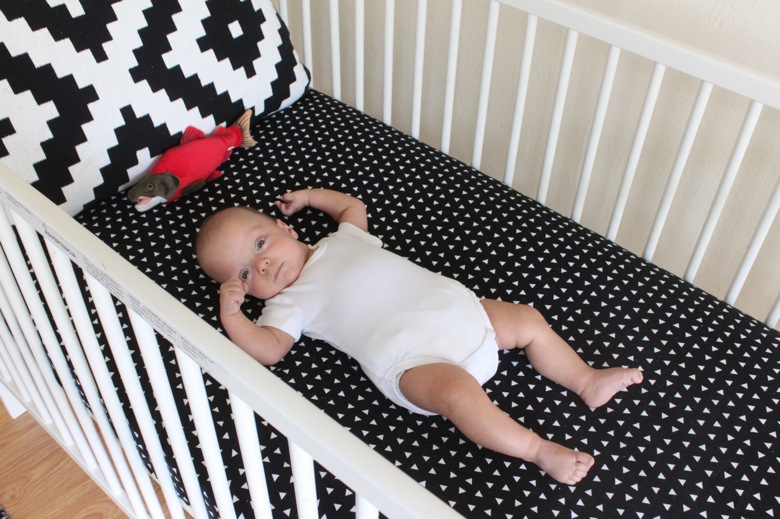 Nursing wise, he’s still doing really well.  During the day he pretty much still likes to eat every three hours, but he can go for a little longer if he’s sleeping, so I just follow his lead.  At nighttime, he’s starting to only wake to be fed every 4 -5 hours now, and has even gone for a couple 6 and 7 hour stretches.  They’re definitely still not the norm, but it’s nice to finally be out of that stage where you worry about your baby waking often enough to continue gaining weight. 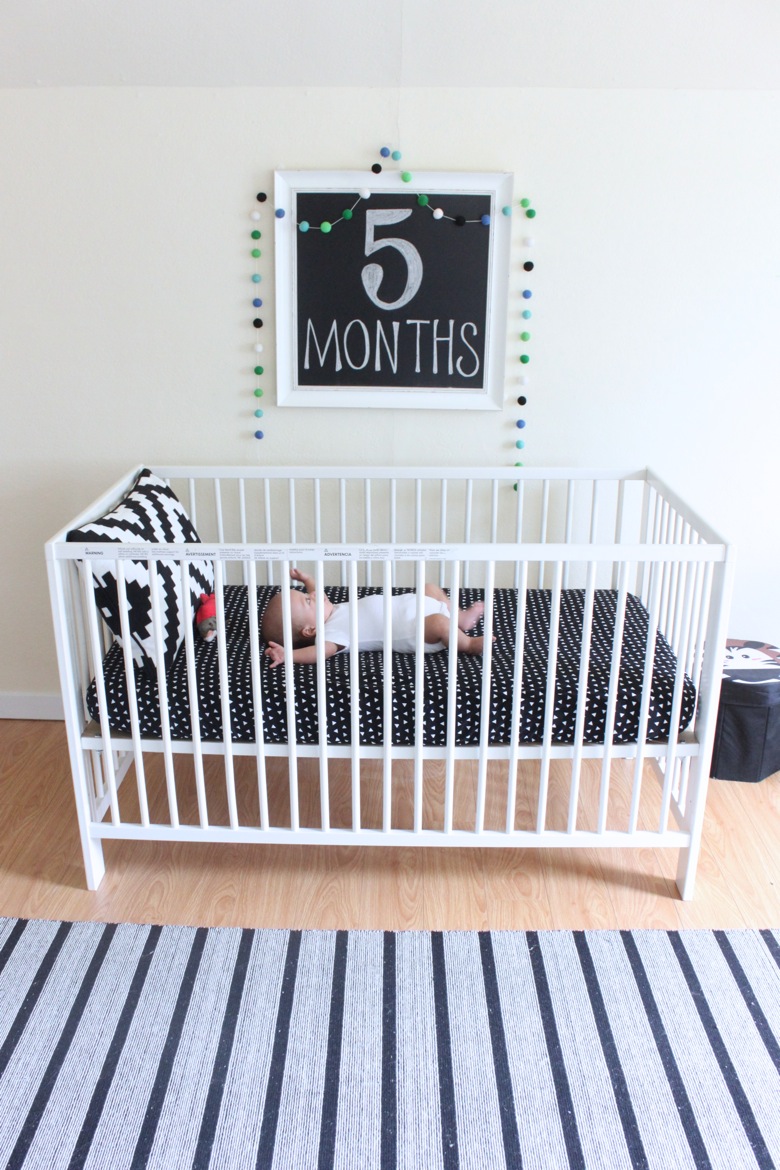 Sleep wise, things are pretty much the same as they’ve been, though I do feel like we’re getting into more of a rhythm now.  Sam usually wakes sometime between 6:30 and 7:15 {otherwise known as the moment I try to sneak out of bed}, and is ready for a morning nap right around the time we have to leave to bring Miss G to school, poor guy.  Same thing goes for school pick-up just after lunch…  I feel like most days he falls asleep just before we have to leave the house.  Some days, if I’m super stealthy and have left enough time to walk, I can pull off transferring him into his stroller and keeping him asleep for most of the walk there and back, but that’s not always the case and I do feel terrible that his daytime sleep always seems to get interrupted… At this age his big sister had all the dark, quiet, and peace a sleepy babe could dream of, and that’s simply not the case for him.  By about 3 o’clock he usually seems to be ready for another sleep, and I’ve been trying my very hardest to be able to set him down for this nap so that I can sneak in some really good one-on-one time with Miss G once she’s done her daily quiet play time.  Some days I’m successful, some days I’m not, and thankfully Grae’s been as understanding as a 5 year old sister who really wants some mama time can be. 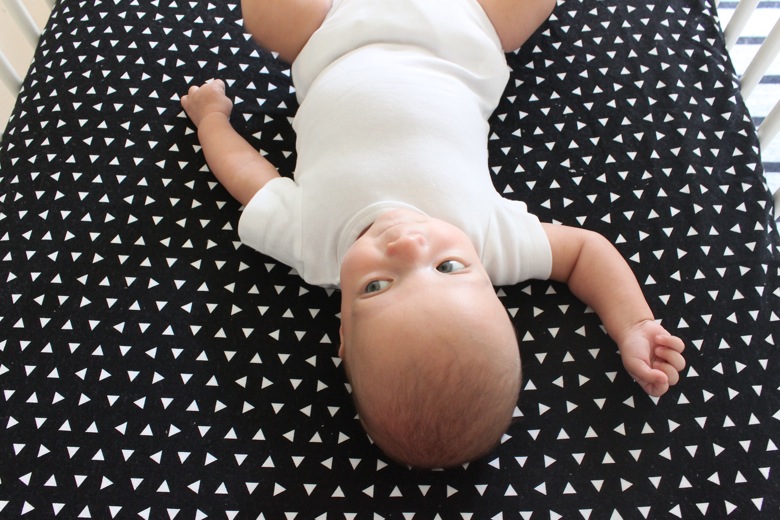 Later on, when nighttime rolls around, we usually do Sam’s bedtime routine right around the same time as Miss G’s {6:30 usually} and then he drifts off to sleep in one of our arms before we set him down in his crib around 8:00 p.m. After that, I dream feed him before I go to bed and he usually stays asleep until 2:30 or 3:00 in the morning, at which point I just bring him into our bed for the rest of the night so that we can snuggle and nurse while I still get some shut eye.  And while I know that co-sleeping’s not for everyone, our current arrangement is working really well for us.  He snuggles up right under my arm for several hours, I get to wake up to a smiley little bubba right next to me, and I actually feel rested, which is amazing. 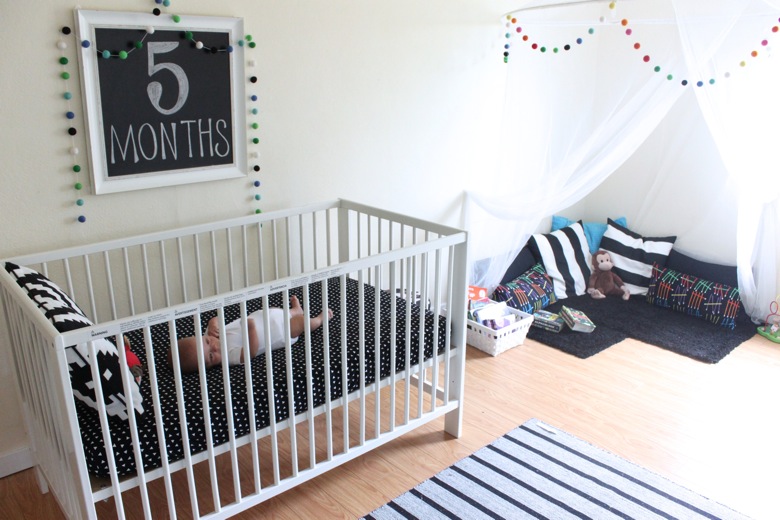 Lastly?  And I know this is going to sound absolutely insane….  But I think Sam’s started signing ‘milk’.  Pretty certain, in fact.  HAH!  I know… He’s only 5 months, and truly only 2 months old, which seems absolutely impossible, but I started just that one sign with him a few weeks back and I swear he signs it back to me when I sign it to him and does it on his own when he’s upset and wanting to be soothed. I guess we’ll have to see, but I think we may have a baby signing genius on our hands. ☺ 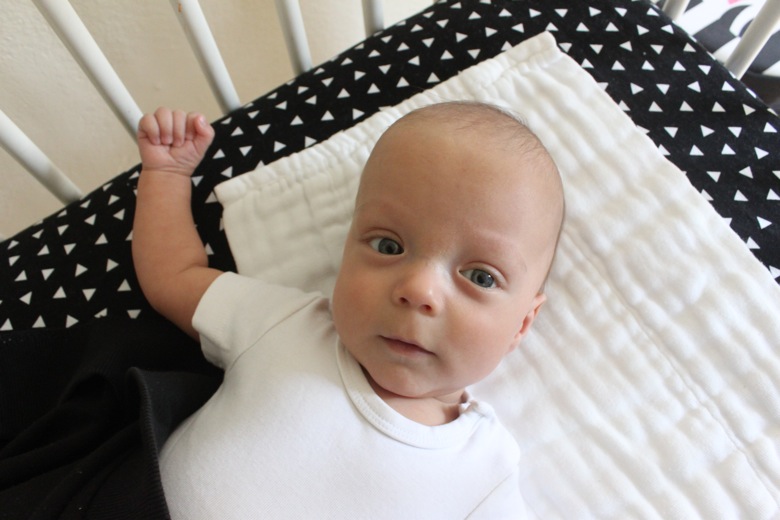 And that’s our sweet Sam at 5 months old.  This month has brought about so many wonderful changes and I can’t wait to see what next month has in store.

4 thoughts on “Five Months of Sam”