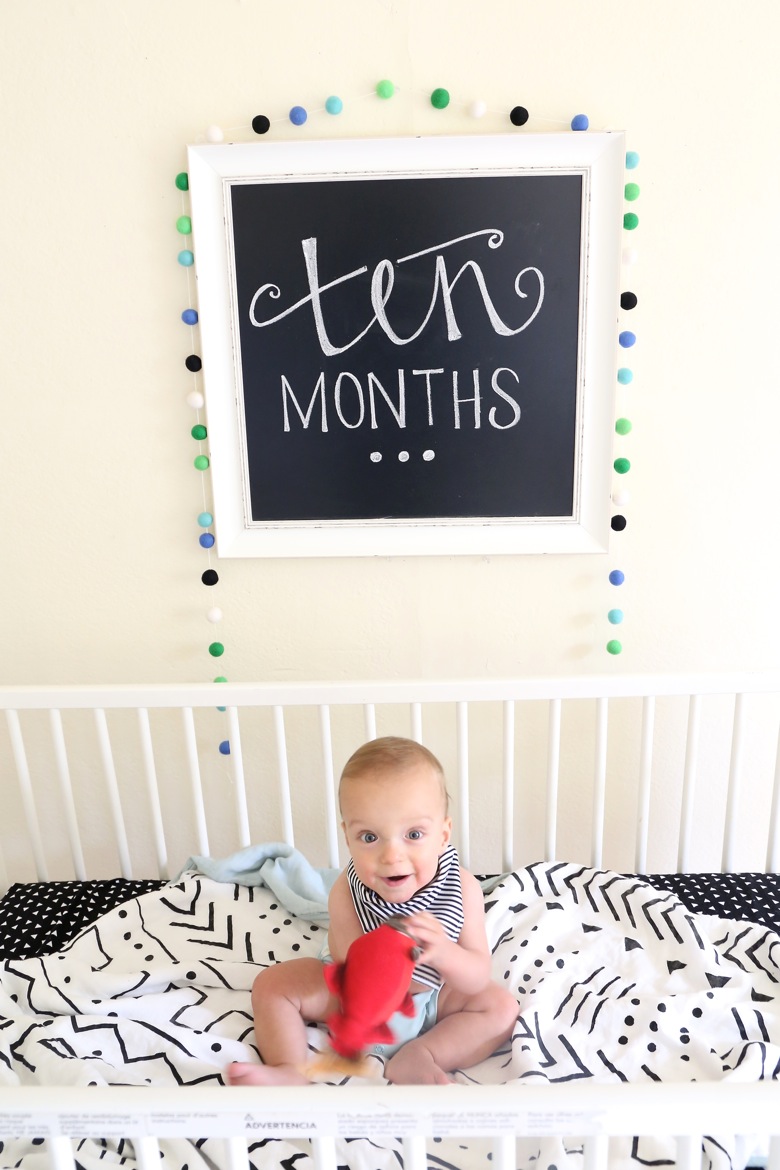 Welp. Sam is officially 11 months old in two days, so it’s fitting that we only got around to taking his 10 month photos today {ugh}.  Seriously though…  Miss G is in school from 9 until 3 and you’d think I’d be able to get all sorts of things done during the day, but honestly, most days it feels like I spend the bulk of my time between school runs, attempting to get our bubba to nap, nursing, and preparing meals for our family.  Anything outside of that is a bonus.  Hence the photos being a month overdue…

As a side note, these photos were by far the hardest monthly photos to take to date.  Besides the fact that Sam has been incredibly whingy the last several days {and especially today – can we all just agree that teething is terrible?}, this little boy did not stop moving.  I think I took about 120 photos, and out of the lot, these few half decently in focus ones were all I got.  Everything else was a blur of flinging arms, kicking feet, and a rolly polly body drunkenly moving across the crib. 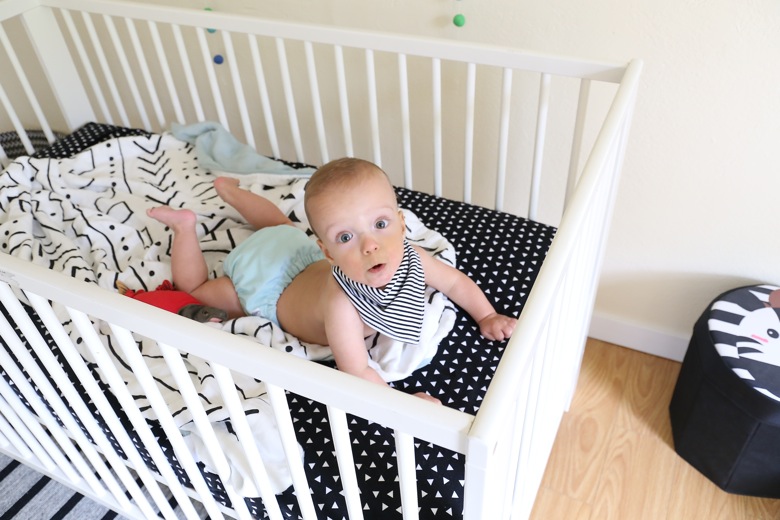 Alright, now onto what our boy was doing at 10 months old {thank goodness I had actually jotted this stuff down on time, because let’s be honest – there would be no remembering at this point otherwise}.

Today our little Sam Jam is officially 10 months old, which is frighteningly close to a year.  How is that even possible?!  For now I’ll live in denial and remind myself that 10 months actually only means 7 months corrected, which is closer to 6 months – just half of a year.  {Ah, that’s much better.}  :)

Stats wise, our little bubba has finally reached 15 pounds after sort of stalling out weight wise for a few months…  15 pounds is still very low, even for his corrected age {like not even on the percentile chart at all}, but we just recently had our first visit with his new pediatrician, and she’s not worried in the least.  In fact, she said that he was doing fantastic weight-wise and that as long as he continues to follow his own curve over time, we’re all good.  As far as size goes, he’s still wearing a lot of 3-6 month clothes, but is ready for some of our 6-12 stuff, especially when length is concerned {whoop whoop!} 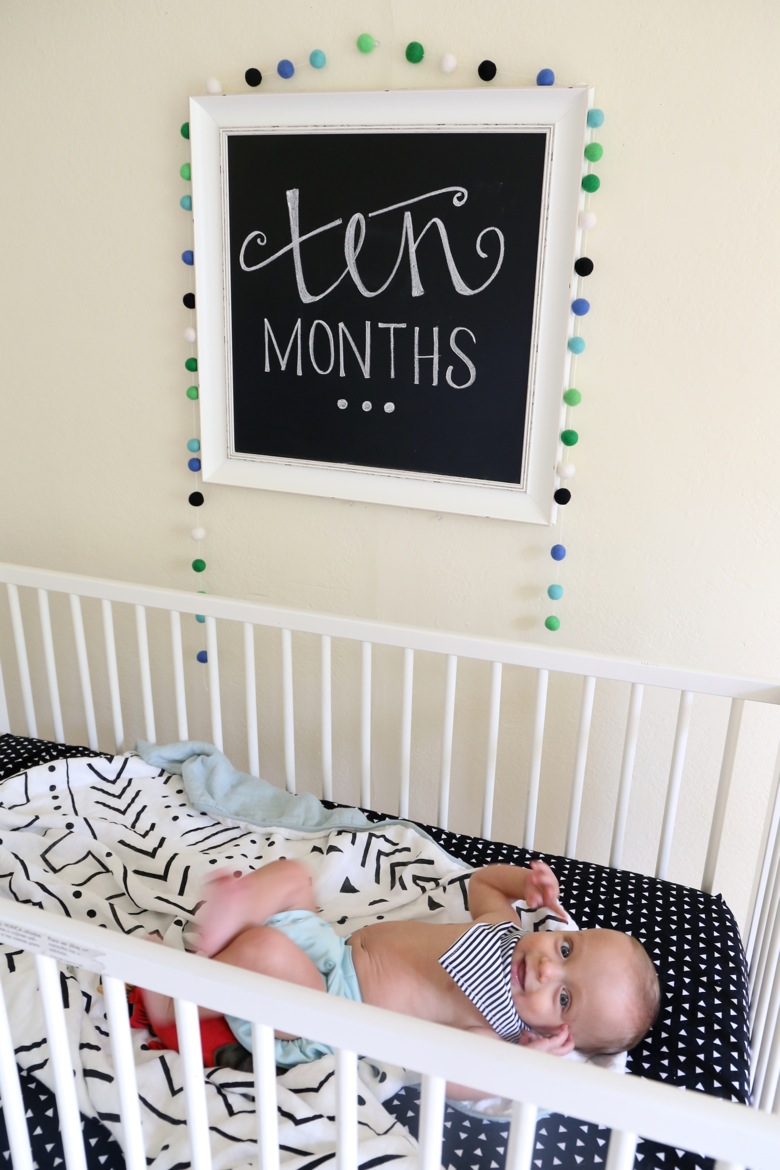 Perhaps the biggest change this month is that this boy can now MOVE!  Not in a typical crawling / army crawling fashion, but if he wants to get somewhere or get something, you can bet that he’ll come up with a series of pivots, backward thrusts, and rolls that will get him to where he wants to be.  It’s pretty amusing to watch. 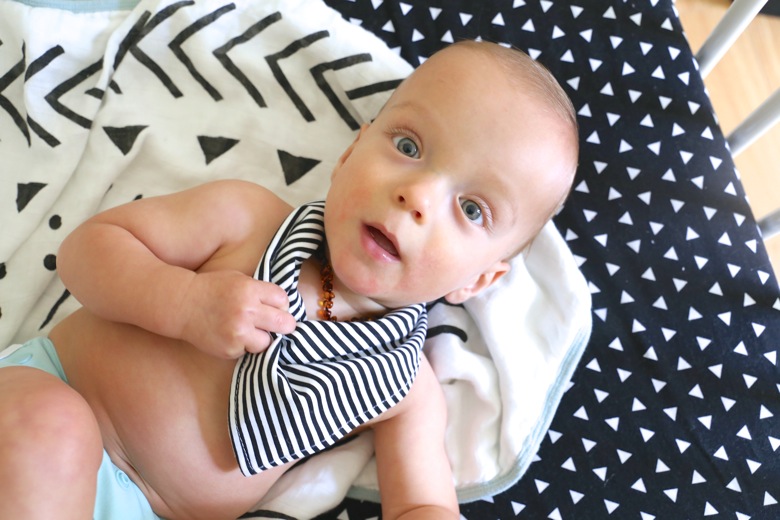 Another big change that this month has brought about is the fact that Sam is now a little eating machine!  I won’t lie – our pediatrician put some serious pressure on us solids-wise as she felt like we were behind on how much / often we were offering solid foods {despite having only started a month and a half ago}, and as much as I don’t agree with a lot of what she said, we have started offering solid foods more often and Sam is loving it.  Well, loving it may be an overly positive way to describe it as this boy is the hangriest little thing ever once you start feeding him {beforehand he’s absolutely fine}, but he does love food.  Just don’t dare try to sneak in a bite of your own meal while helping him with his. 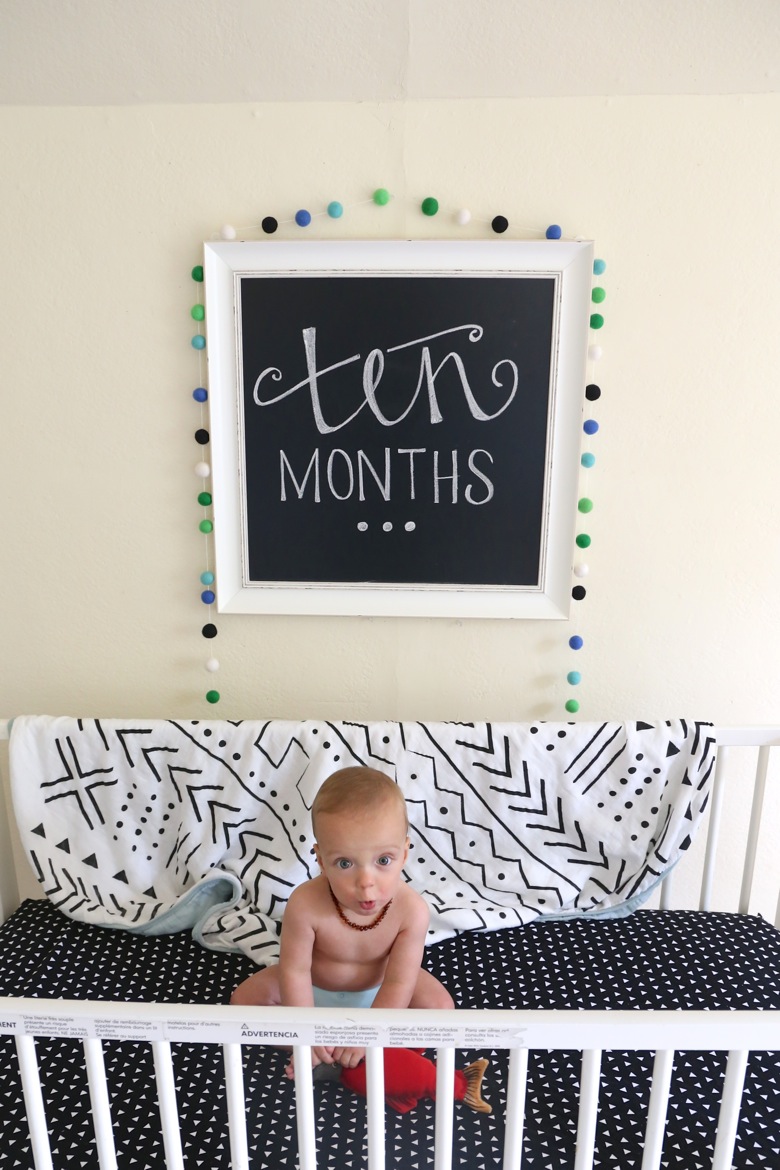 Ooh – in other big news, we finally have a tooth!  One perfect, pearly white right at the bottom of that sweet little pout.  He’s also *so* close to sitting independently without falling over.  We’re working hard on it and I suspect it won’t be long now {fingers crossed}. 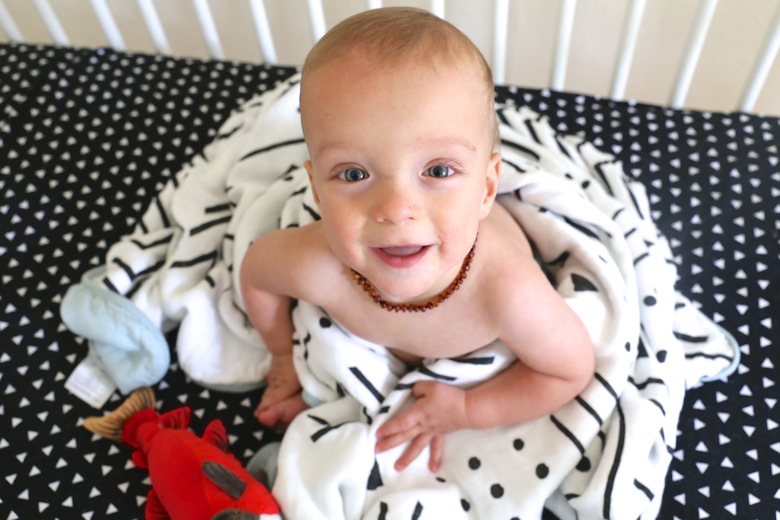 I feel like we’ve been slacking a little bit signing wise, but he now uses all three of the signs we’ve introduced to him – ‘more’, ‘bird’ (only because he looooves watching birds out the window), and ‘milk’.  Now to get onto teaching him some new ones…  My guess is we’ll start with ‘all done’, ‘water’, and ‘bath’ next, but we’ll see. 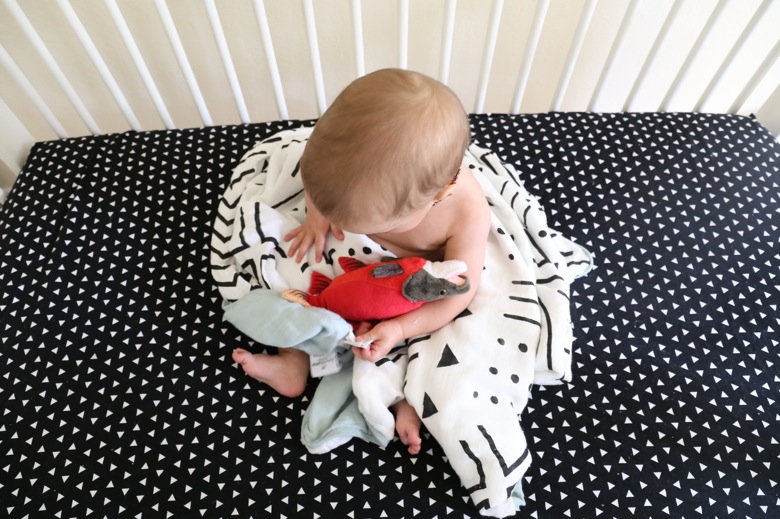 As far as sleep goes, not much has changed.  Sam still goes to bed early (we’re talking 6:00 / 6:30 p.m.), wakes around midnight for a little feed and goes back in his crib, and then wakes around 3:00 or 4:00 a.m. and comes into our bed until 6:30 or 7:00 a.m.  Right now this works for us and though I’m sure he could be in his crib all night with a little more effort on my part, I’m still quite happily making up for time I missed out on while he was in the NICU, so early morning snuggles with mama it is.

The one change as far as sleep goes?  Starting this week, we’re going to attempt to have Sam nap in his crib during the day.  We’ve been so spoiled with Brad home all summer and Sam truly does sleep for longer in someone’s arms, but because he still naps morning, noon, and afternoon, I’d really like to be able to set him down during those times so I can get some work done.  We’ll see how that works out for me – hah! {Wish me luck?} 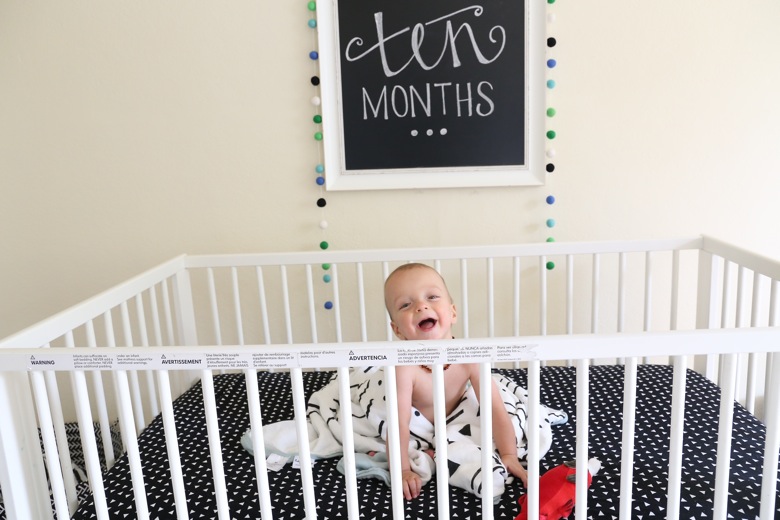 Well, that’s our baby bubba at 10 months.  He’s a sweet little thing and he brings so much joy into our lives, even when he’s teething and miserable.

Alright, now back to Sam’s blanket…  Isn’t it just gorgeous?  It’s the perfect addition to his nursery and it’s perfectly suited to my love of minimalism and all things black, white, and aqua {so basically, it was love at first sight}.  We actually have both versions – the luxe muslin quilt and the luxe muslin swaddle – we love it that much.  Both are by the awesome Vancouver company, Loulou Lollipop, which also specializes in beautiful high quality silicone teething jewellery and toys like the Lollia Wood & Silicone Teething Necklace I often wear and the donut silicone teether Sam’s always chewing on.  Well, being as lovely as they are, the ladies behind Loulou Lollipop have offered one of my Canadian readers a $65 credit to their shop, louloulollipop.ca!  Just enter using the form below and a winner will be selected at random on Sunday, October 9th at 11:59 p.m PST.  Good luck!