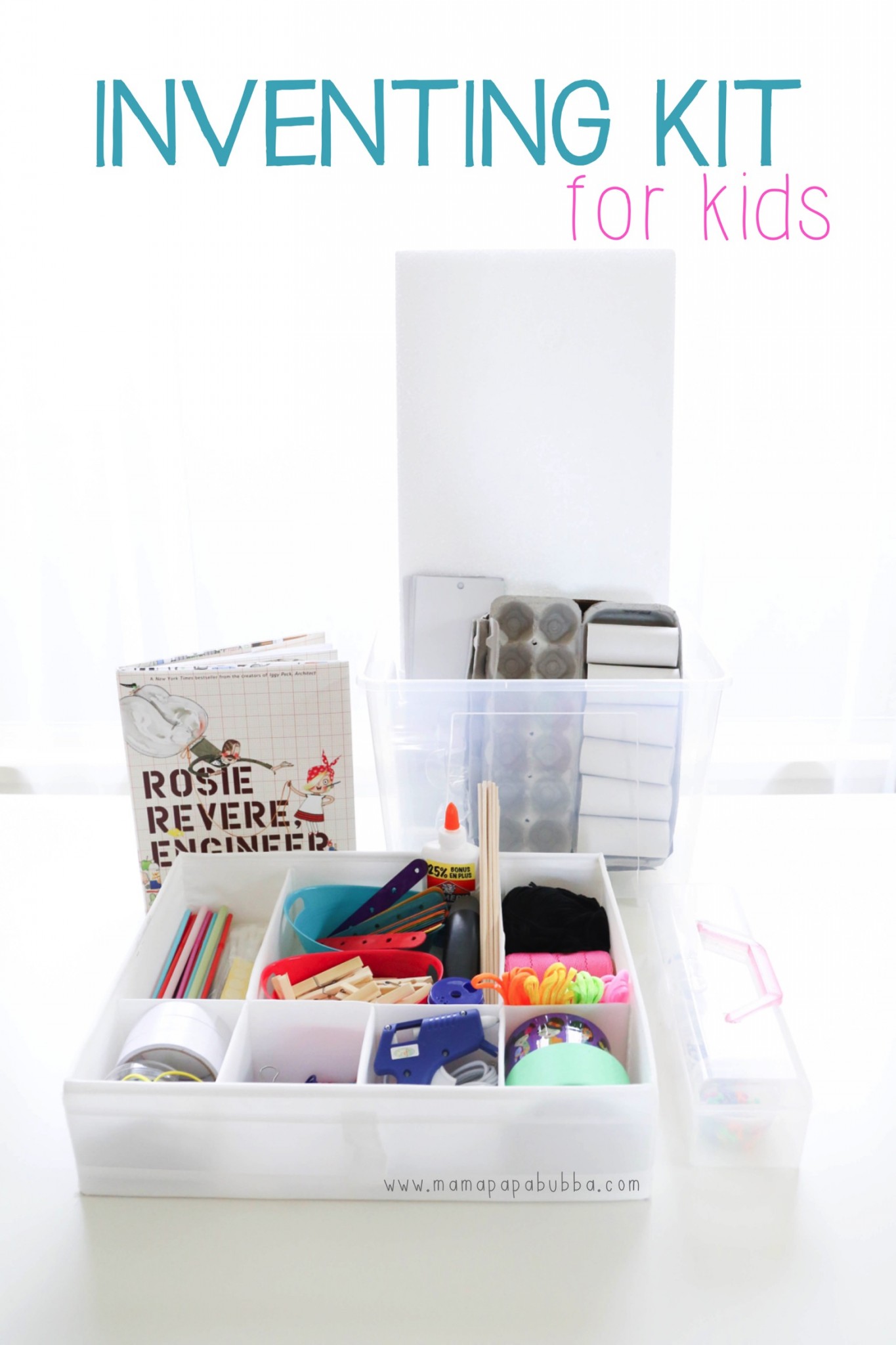 Last fall, Miss G went through a huge ‘inventing’ stage.  She loved nothing more than putting random bits and bobs together to create these elaborate structures and objects… It was SO cool to watch her imagination come to life.  Since she was constantly rifling through our craft drawers and recycling bins to find what she needed {and often wanted help locating specific things}, I asked her if she’d like to help put together a DIY Inventing Kit – a collection of items that she could have organized and in one spot whenever the urge to invent struck – and of course she did!  The result was this awesome kit full of colourful recyclables, materials, and adhesives, plus a couple of inspirational books. 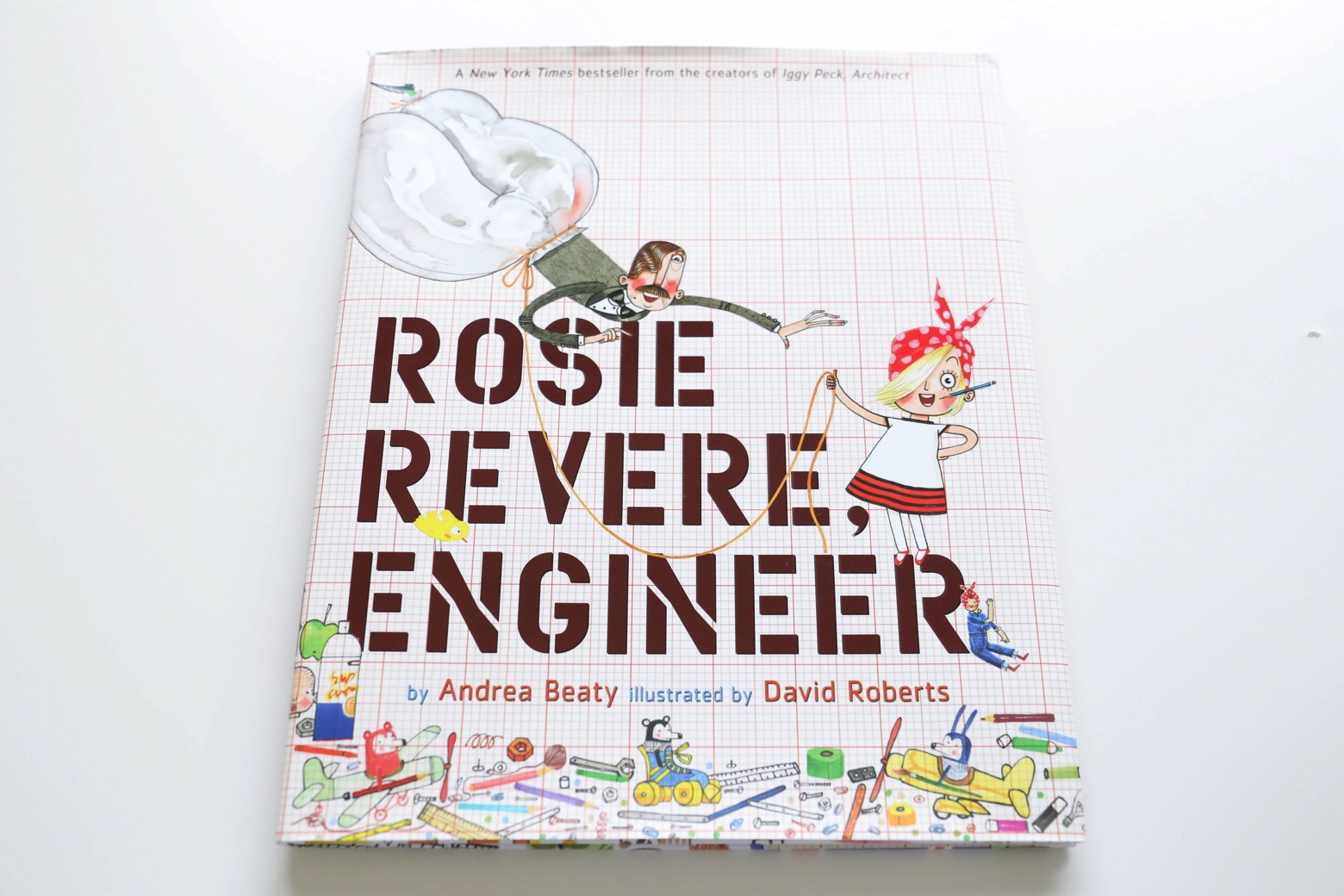 If I remember right, it was actually a couple of new books that kicked off her whole inventing stage in the first place.  We had just gotten Rosie Revere, Engineer by Andrea Beaty {CAN} not long before it started and it was a book that was read multiple times a day in our house.  If you haven’t read it before, you must.  It’s the story of Rosie Revere, a little girl who dreams about becoming a great engineer and brings her ideas to life at night in her room when she’s alone.  She never allows anyone to see them for the fear of embarrassment and failure, until a visit from her awesome great-aunt Rose who teaches her that a first flop is actually something to celebrate!  A home library must-have in my opinion! 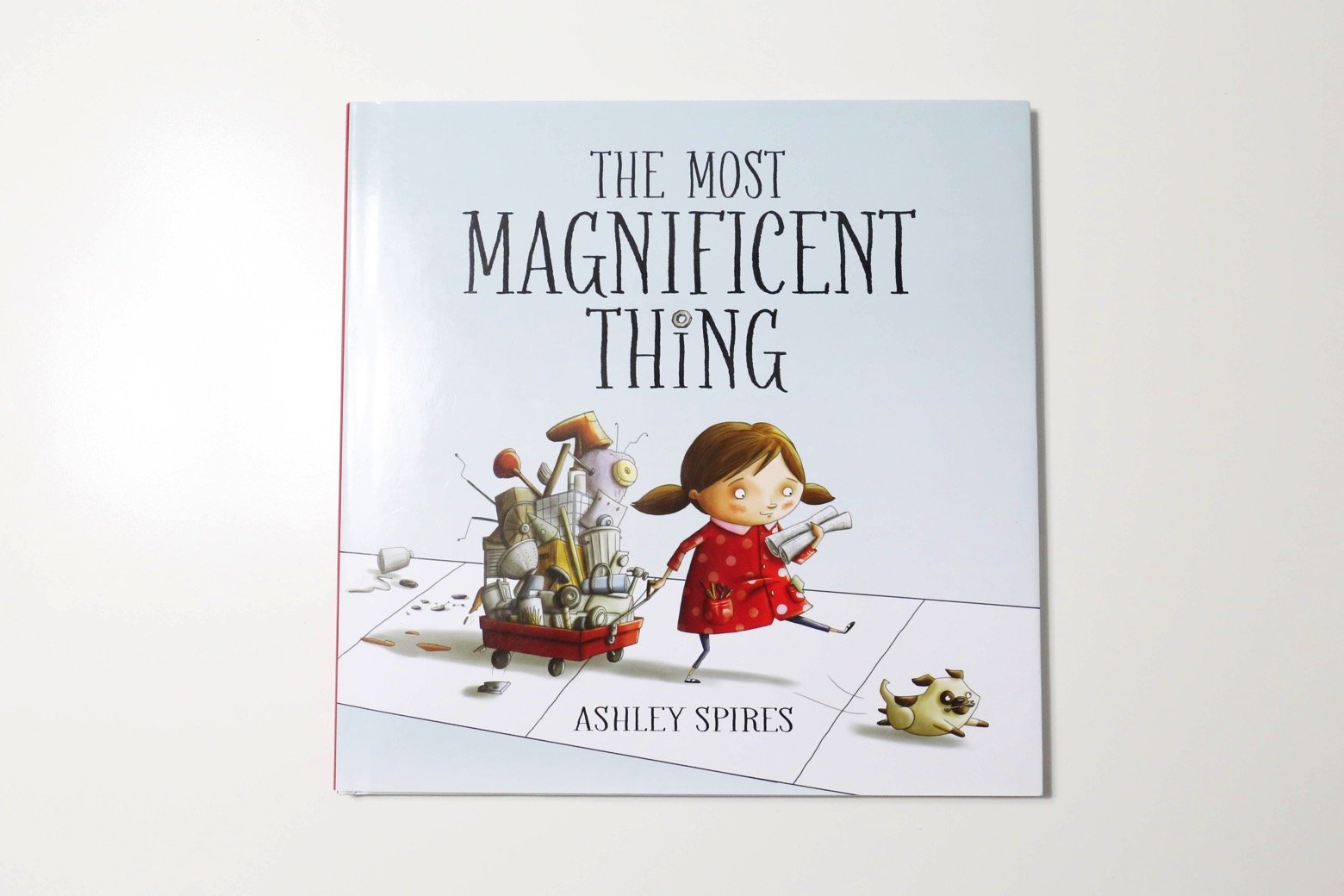 The other book we had just recently gotten at the time was The Most Magnificent Thing by Ashley Spires {CAN}.  It’s the story of a little girl who sets out to make her idea a reality and create THE MOST MAGNIFICENT THING.  She knows exactly what it will look like and how it will work, but no matter what she does, it keeps turning out wrong.  She gets frustrated, she gets angry, and even wants to quit, but with the help of a friend and a little perspective, she gets back to it and works until she gets it right.  Another must have in my humble opinion.

{For more titles that focus on trying new things and not giving up, pop over to my friend Lauren’s list of 25 growth mindset books – she’s always got the best recommendations!} 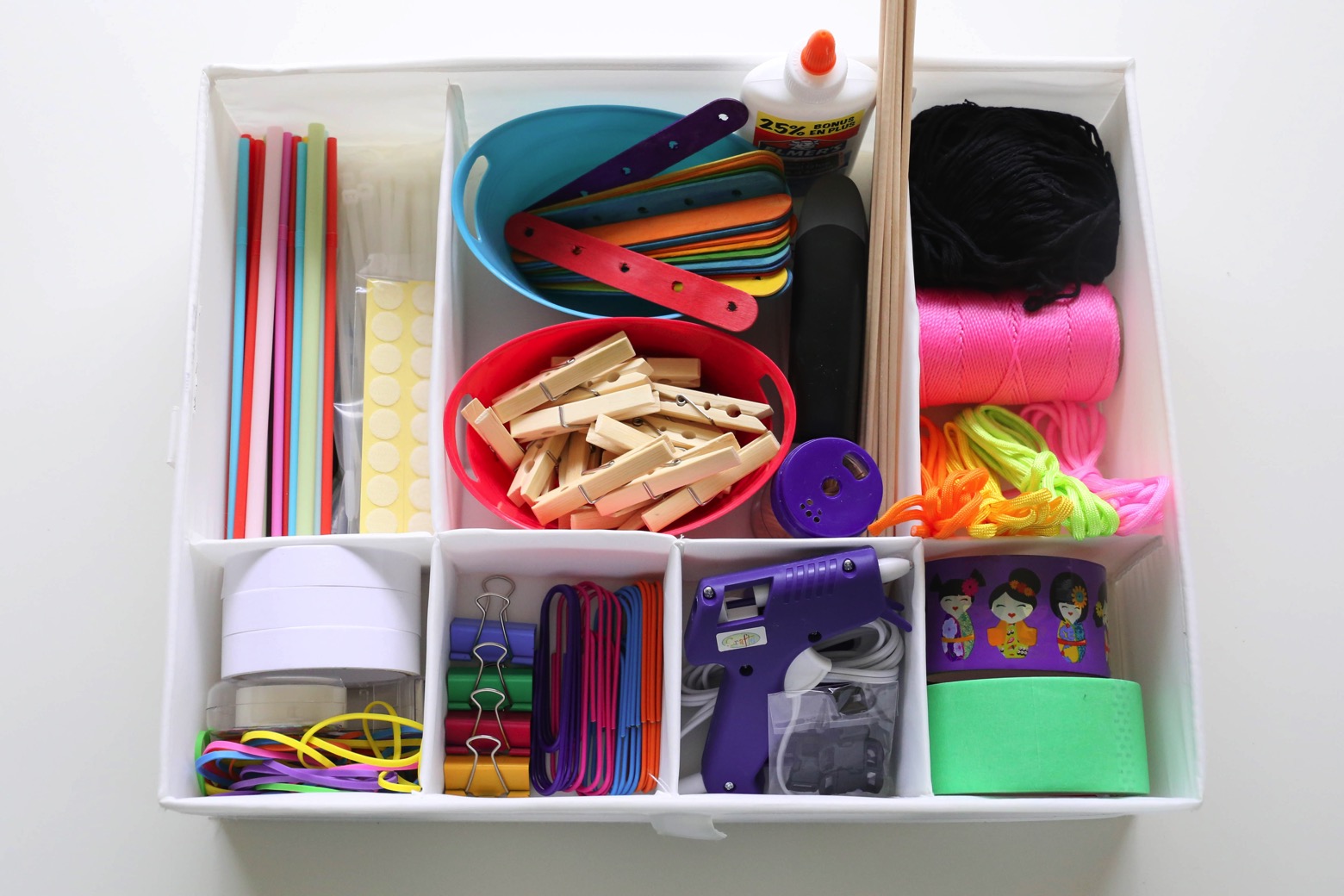 Alright, so beyond the books, here’s what our inventing kit included…  First off, we kept many of our materials organized in an Ikea drawer organizer, which was perfect for our purpose.  Many of these things we actually already had on hand, and the rest was picked up at our local dollar store {though you can find most of it on Amazon and in other shops too of course}. 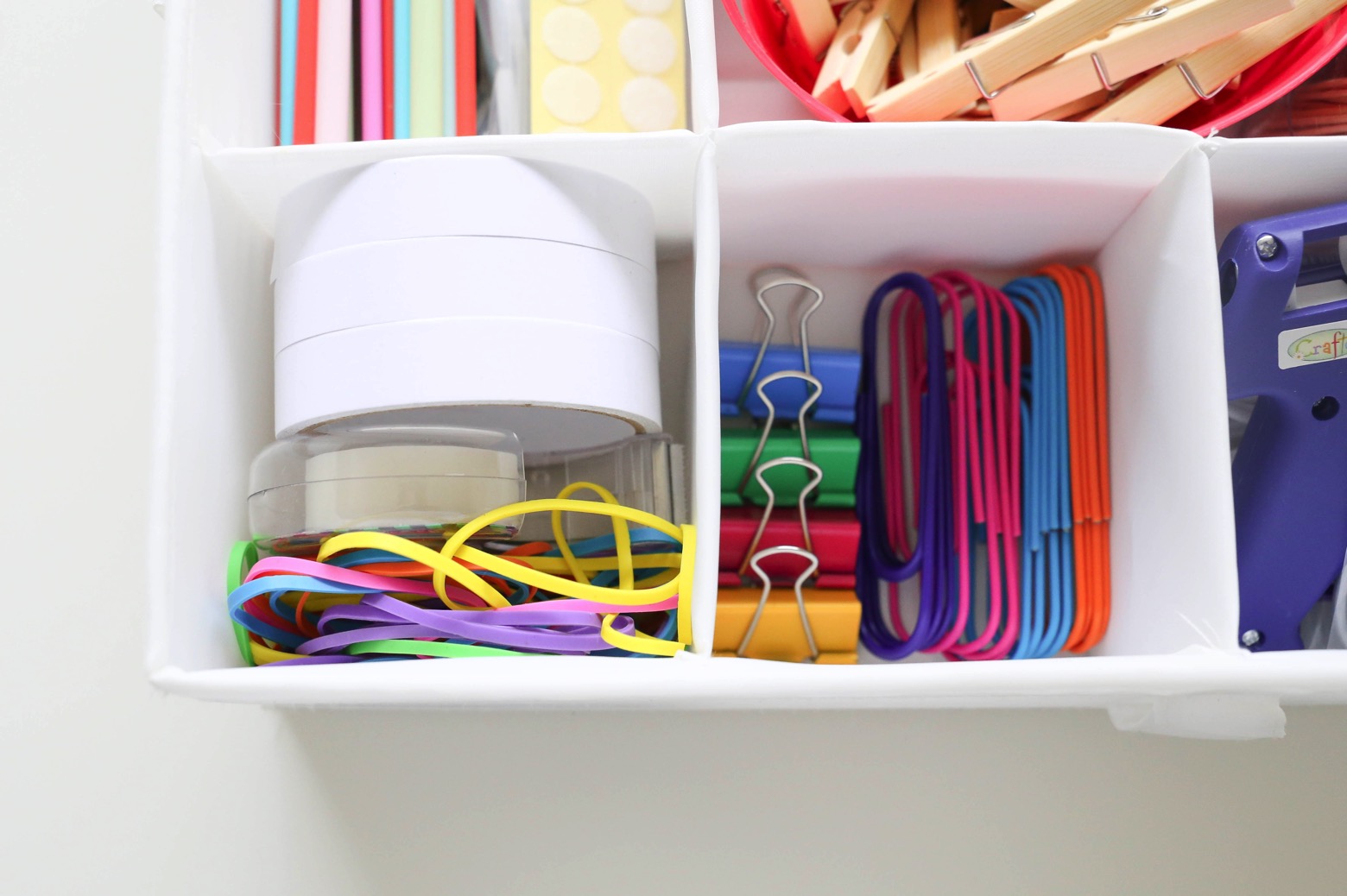 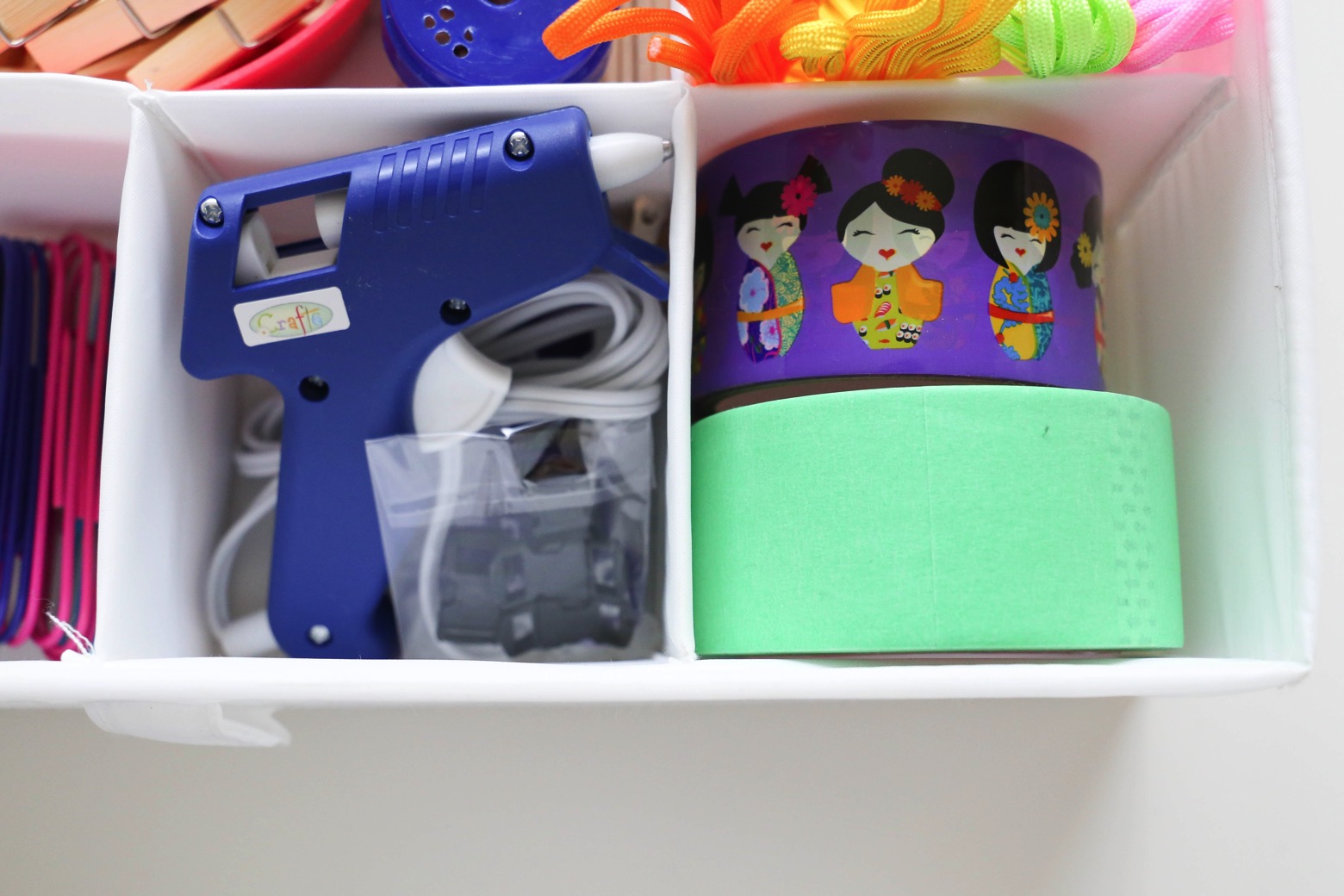 – a miniature hot glue gun {CAN} with extra glue sticks (I felt comfortable with this as Miss G’s been using a low temp glue gun {CAN}for years and is quite cautious, but I highly recommend the low temp version if your little one is new to glue guns) 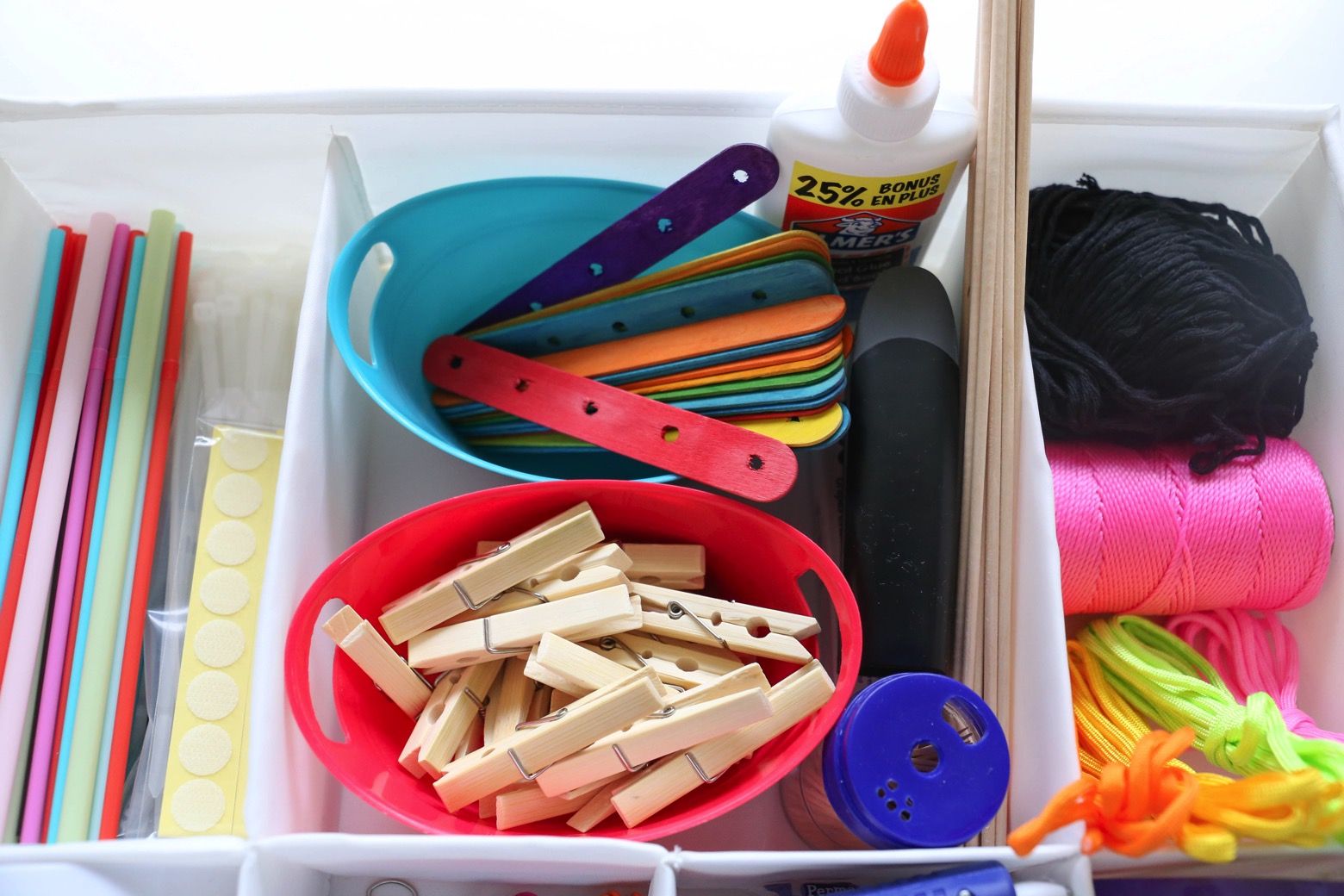 – zap straps in different sizes {CAN}

– a stapler with extra staples 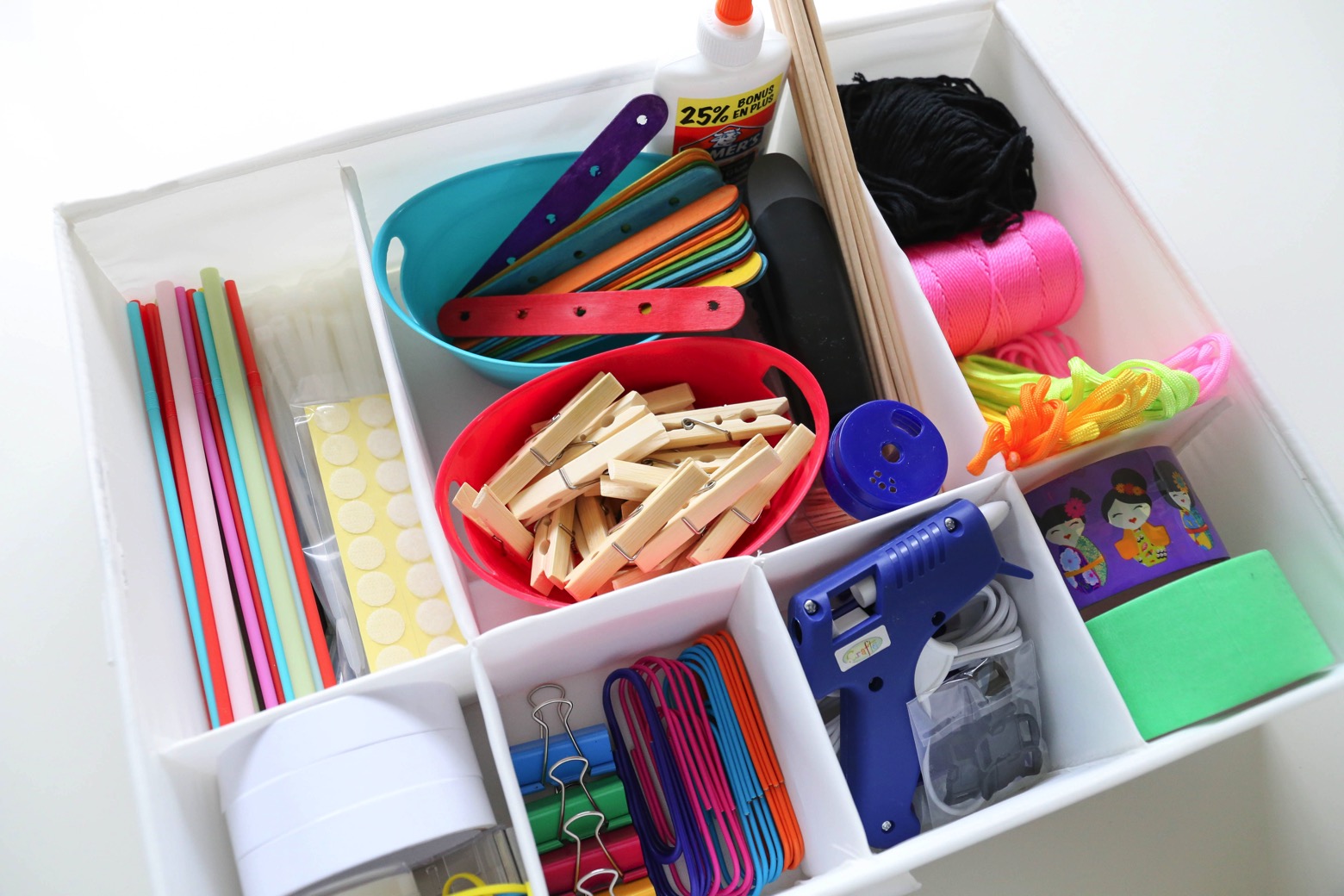 Really, the options are endless!  You could include anything you like and feel comfortable letting your kiddo build with. 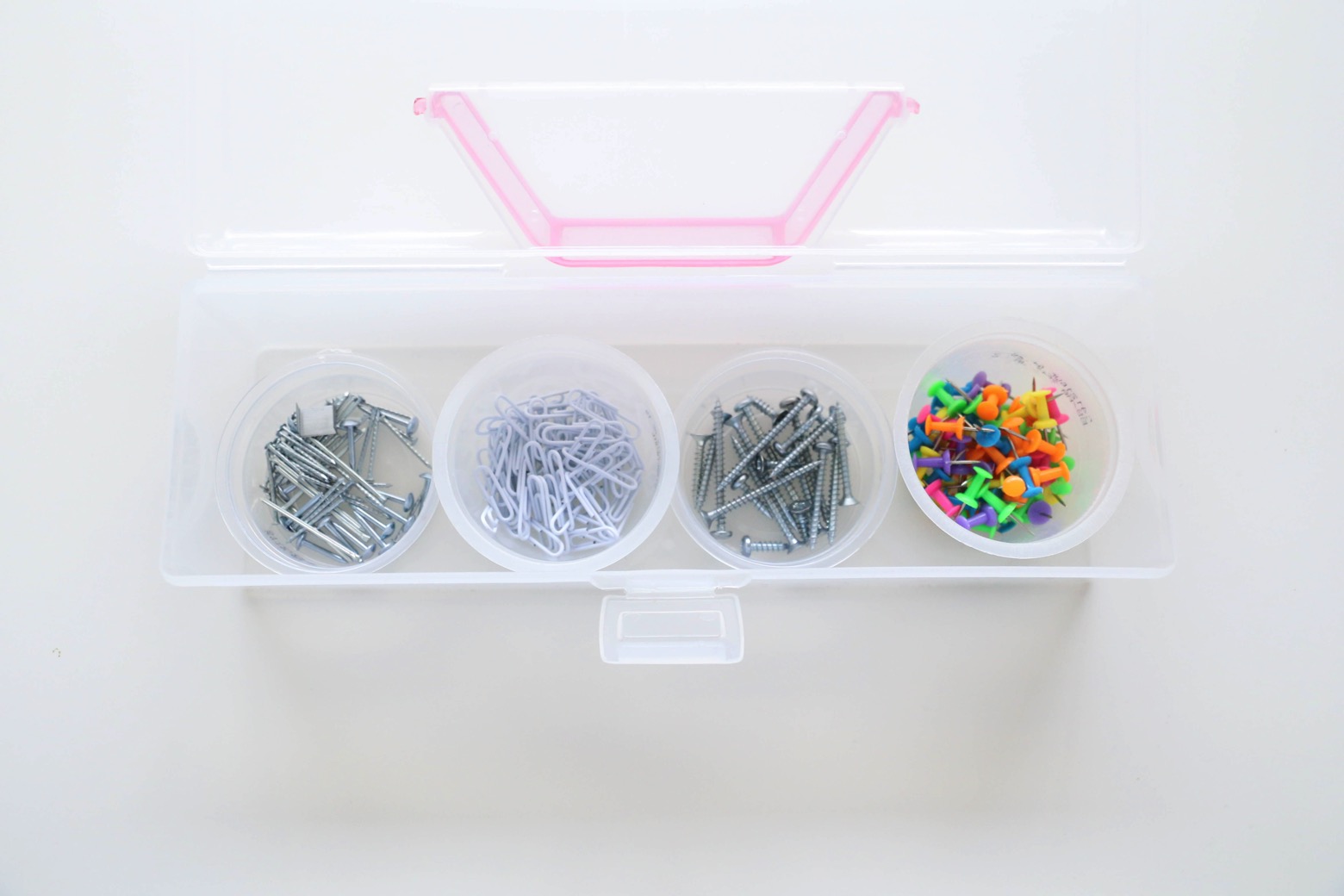 We also had a little tool kit that included a variety of nails, paperclips, screws, and colourful pushpins. 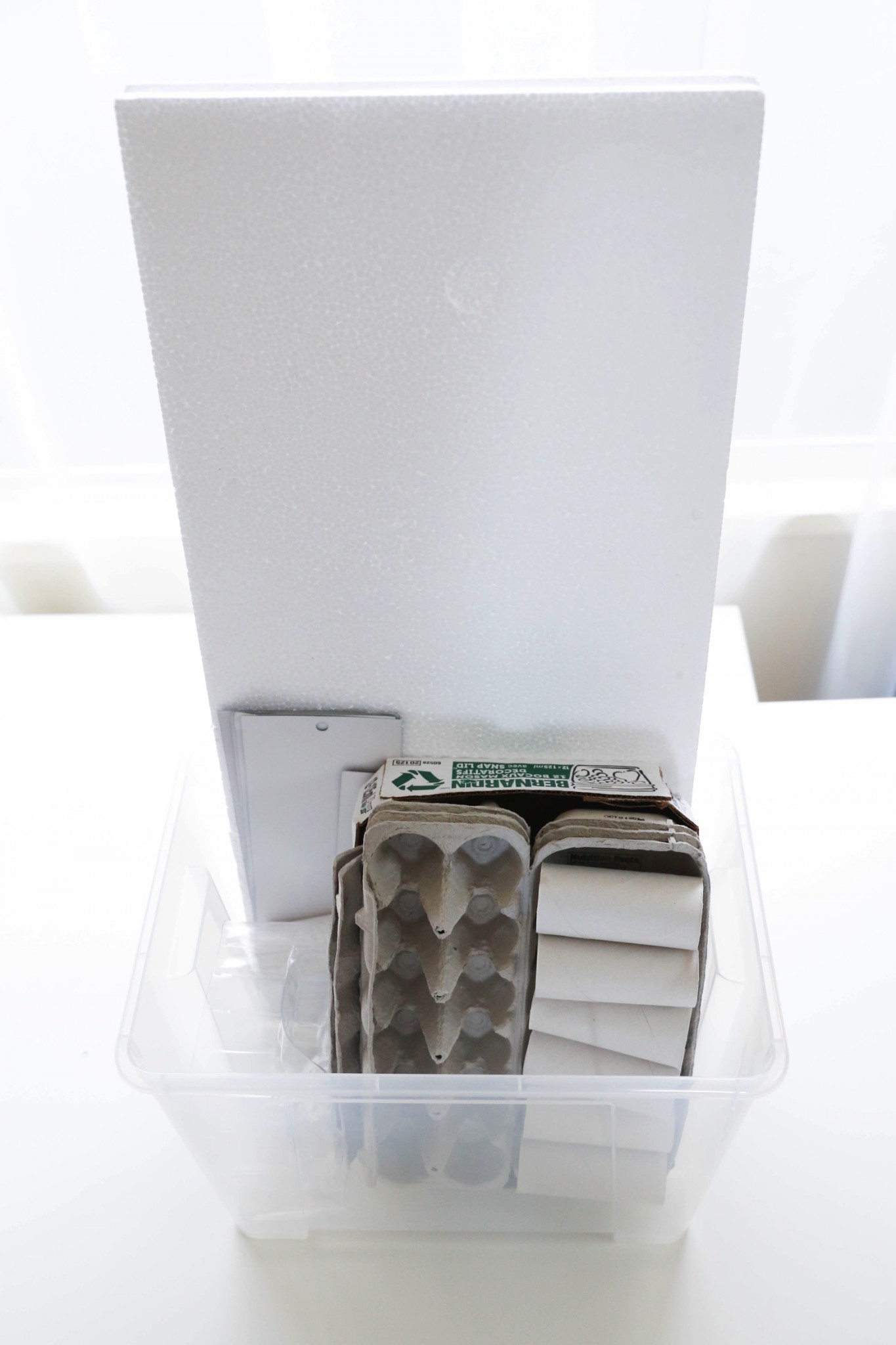 In a separate bin, we gathered up all kinds of fun things from the recycling bin {and garbage pile in the case of the styrofoam}…  Egg cartons, paper rolls, cardboard trays, packaging – whatever we could find that looked like it had building potential! 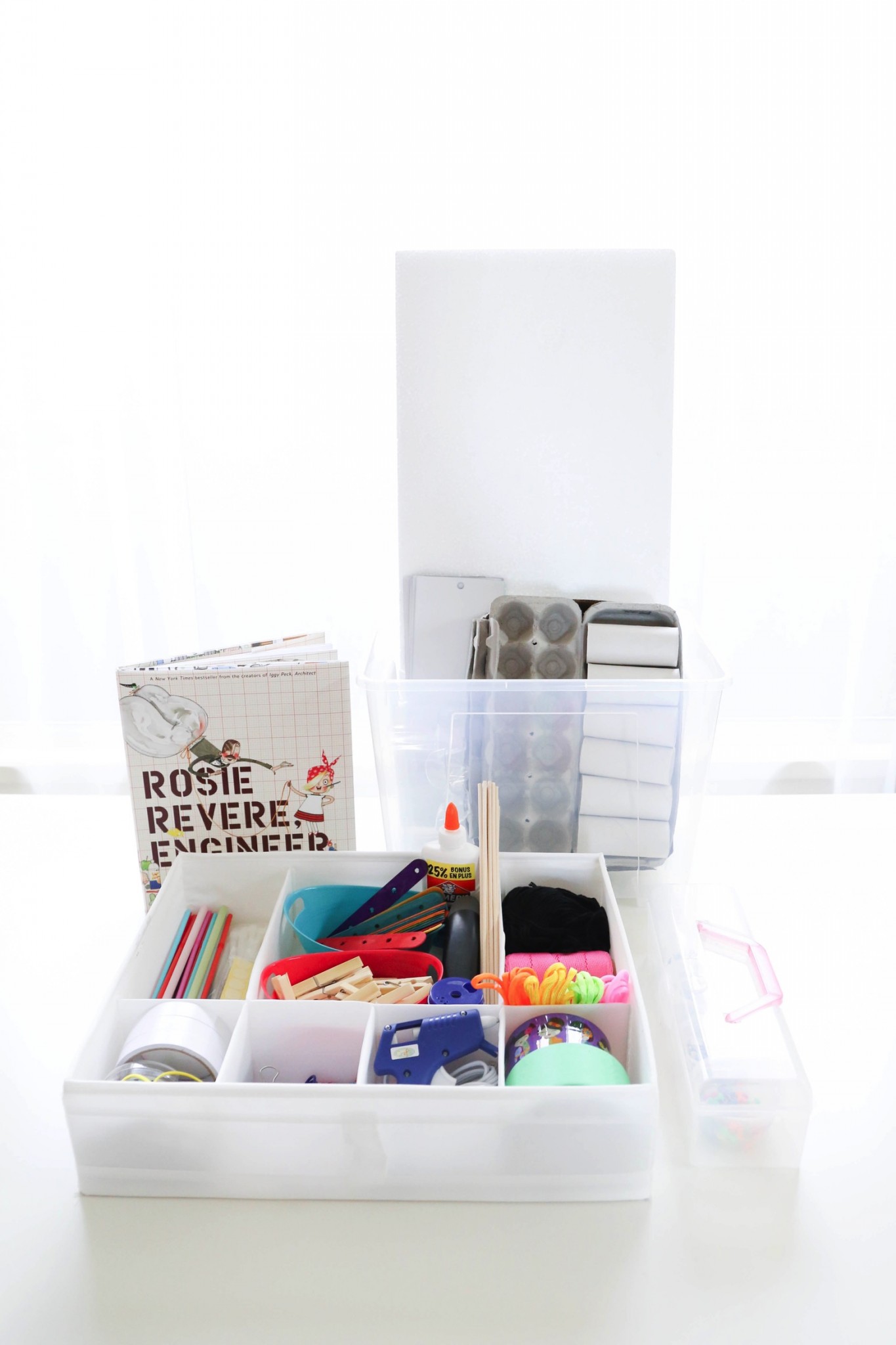 And voila!  Here it is…  Miss G’s inventing kit!  Wouldn’t this make a fun gift for your kiddo who loves creating?! 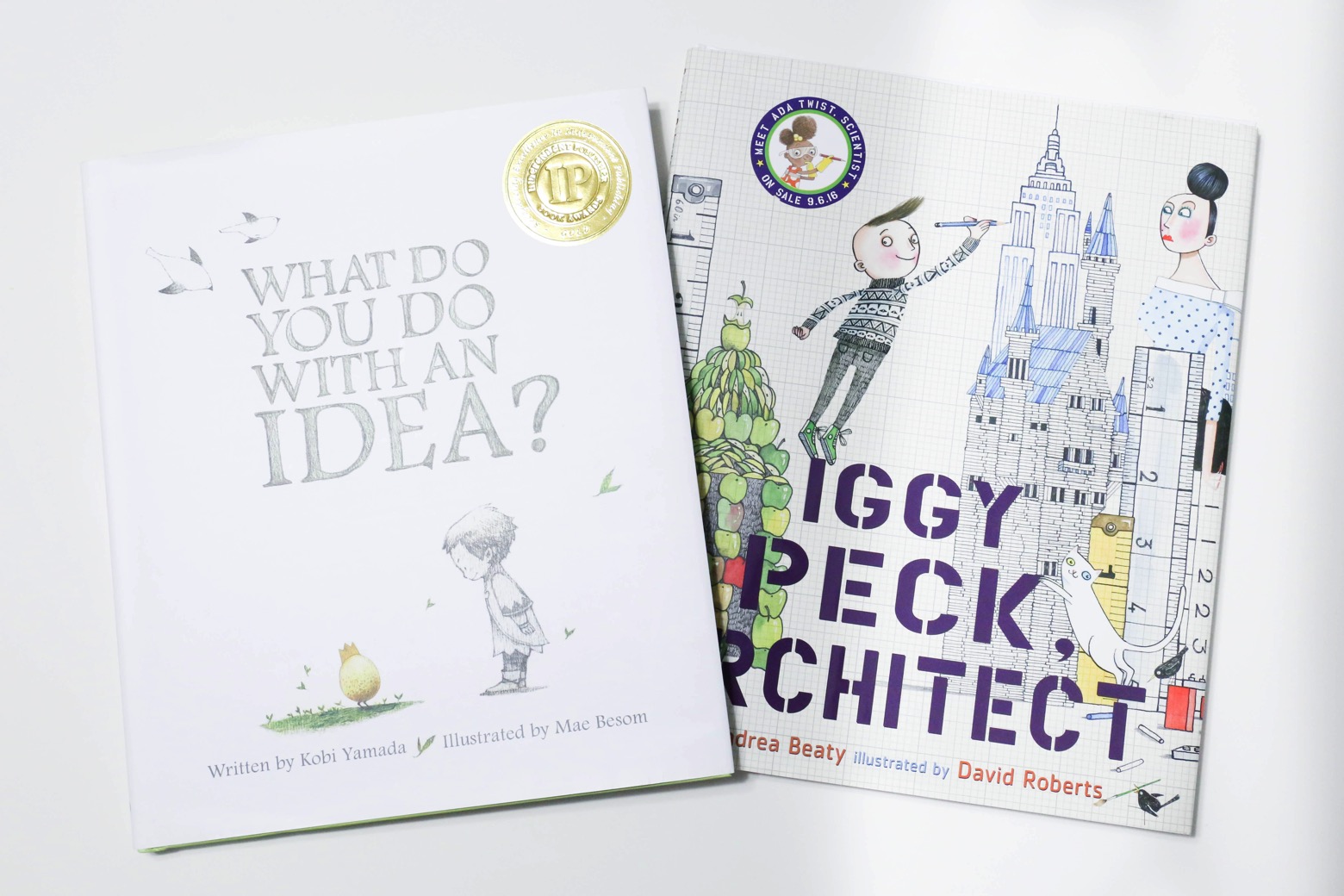 And while we didn’t own them at the time, I think Kobi Yamada’s What Do You Do With an Idea? {CAN} and Andrea Beaty’s Iggy Peck, Architect {CAN} would make perfect additions to a DIY inventing kit gift too. 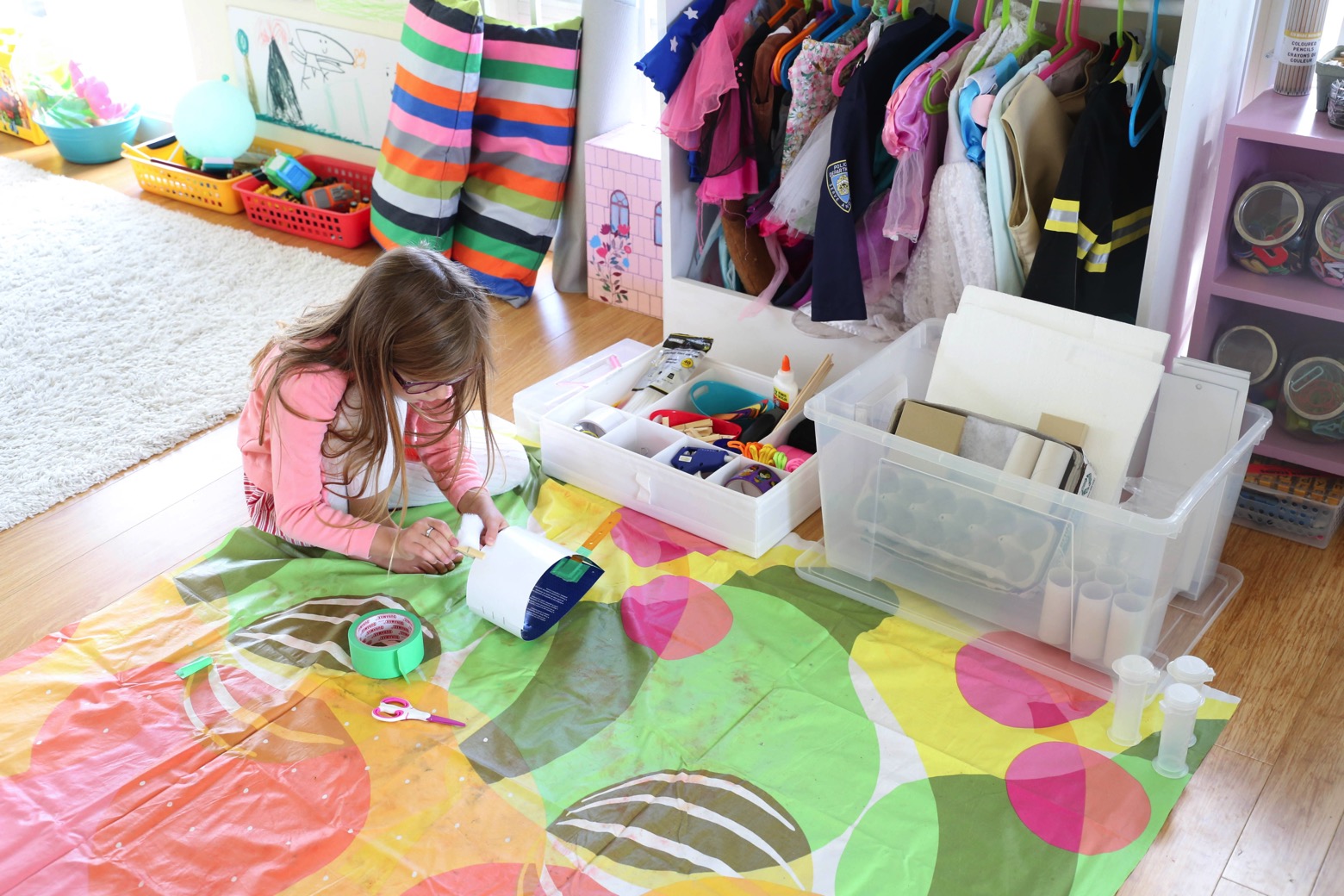 Of course once the inventing kit is put together, the real fun begins! 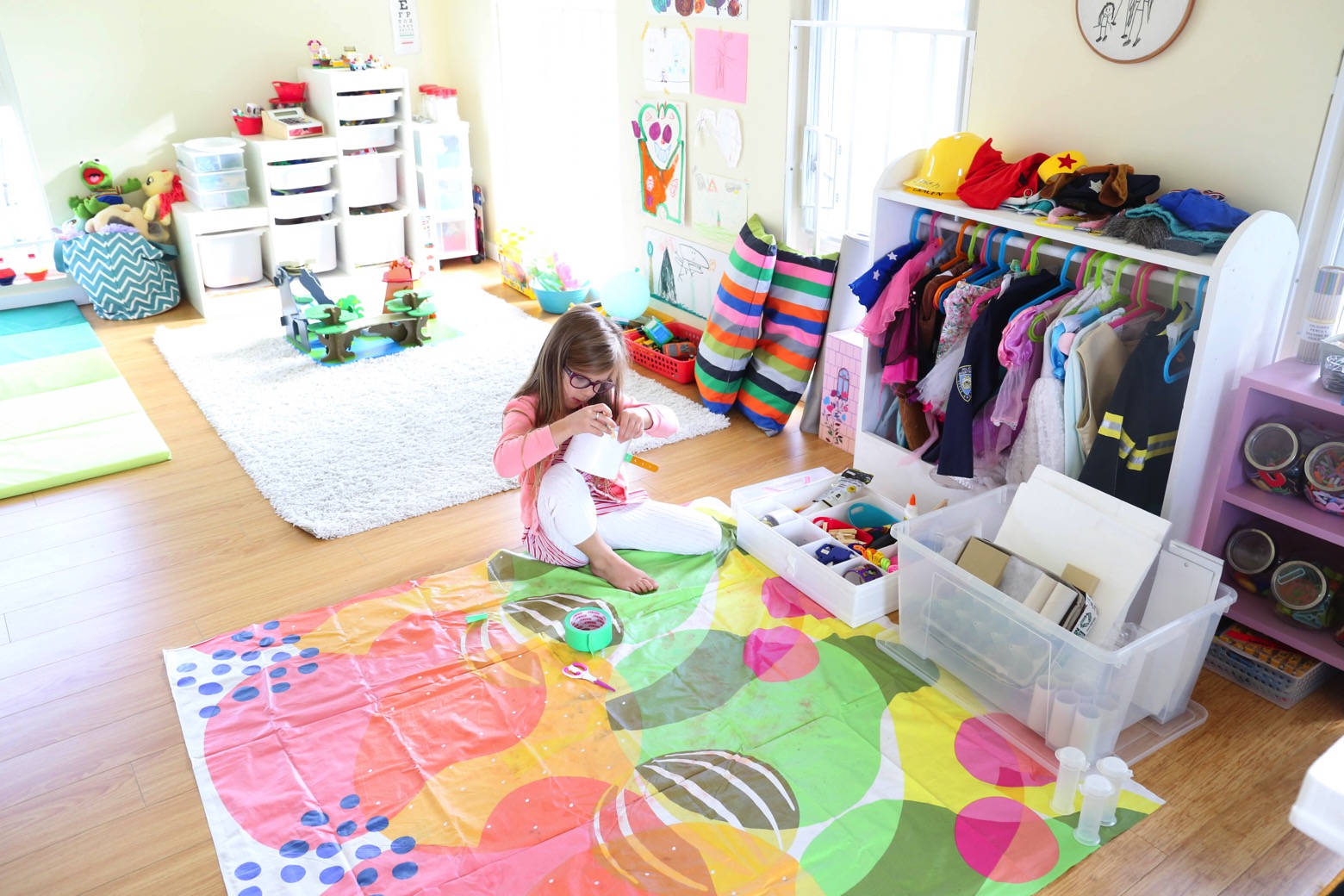 I basically set down a drop sheet, helped Miss G move all of her inventing kit parts into our playroom, and then let her go for it. 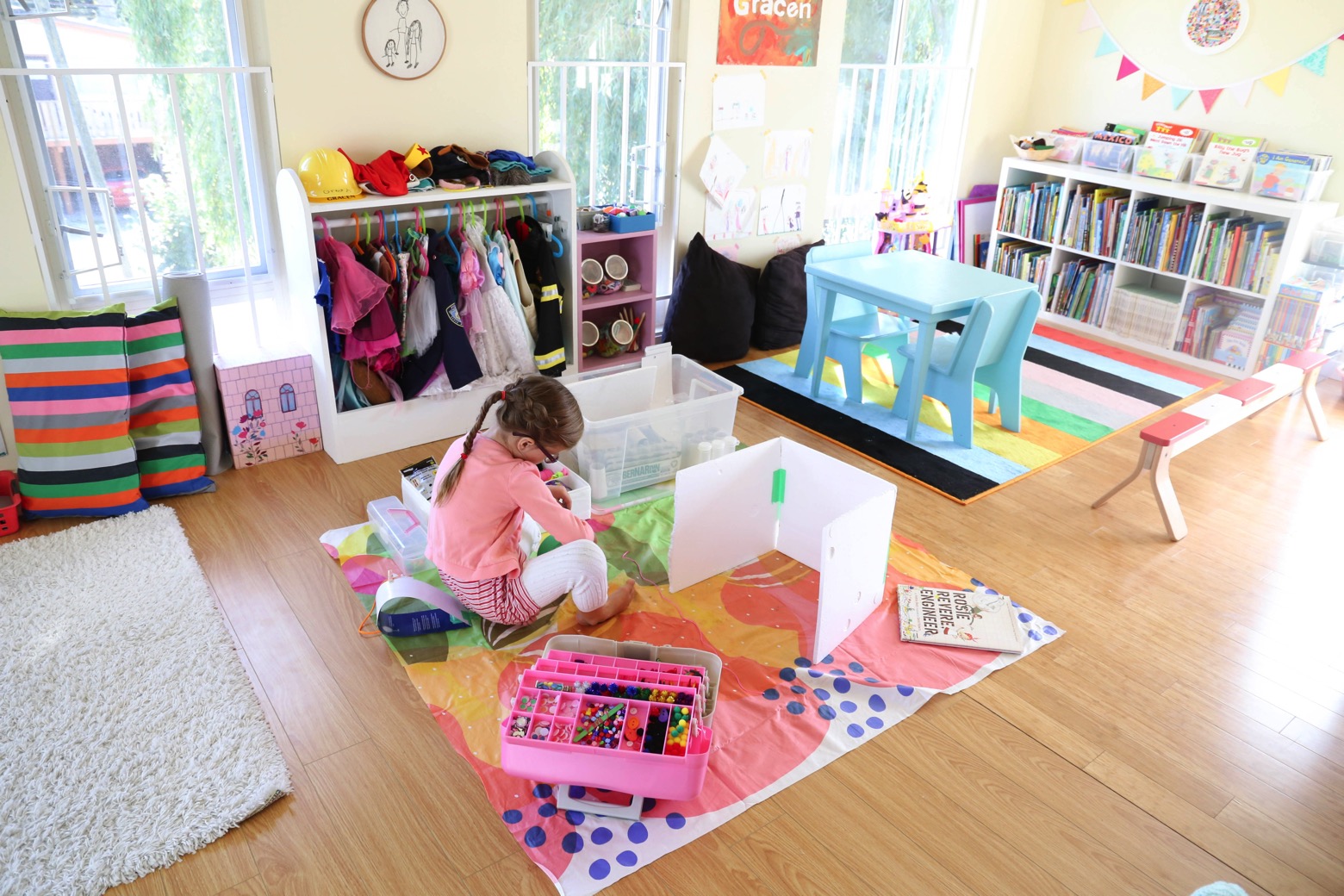 This time around she had an idea right away…  She wanted to build an activity seat for kids – somewhere where they could be cozy, but always have something fun to do – so that’s what she set out to create. 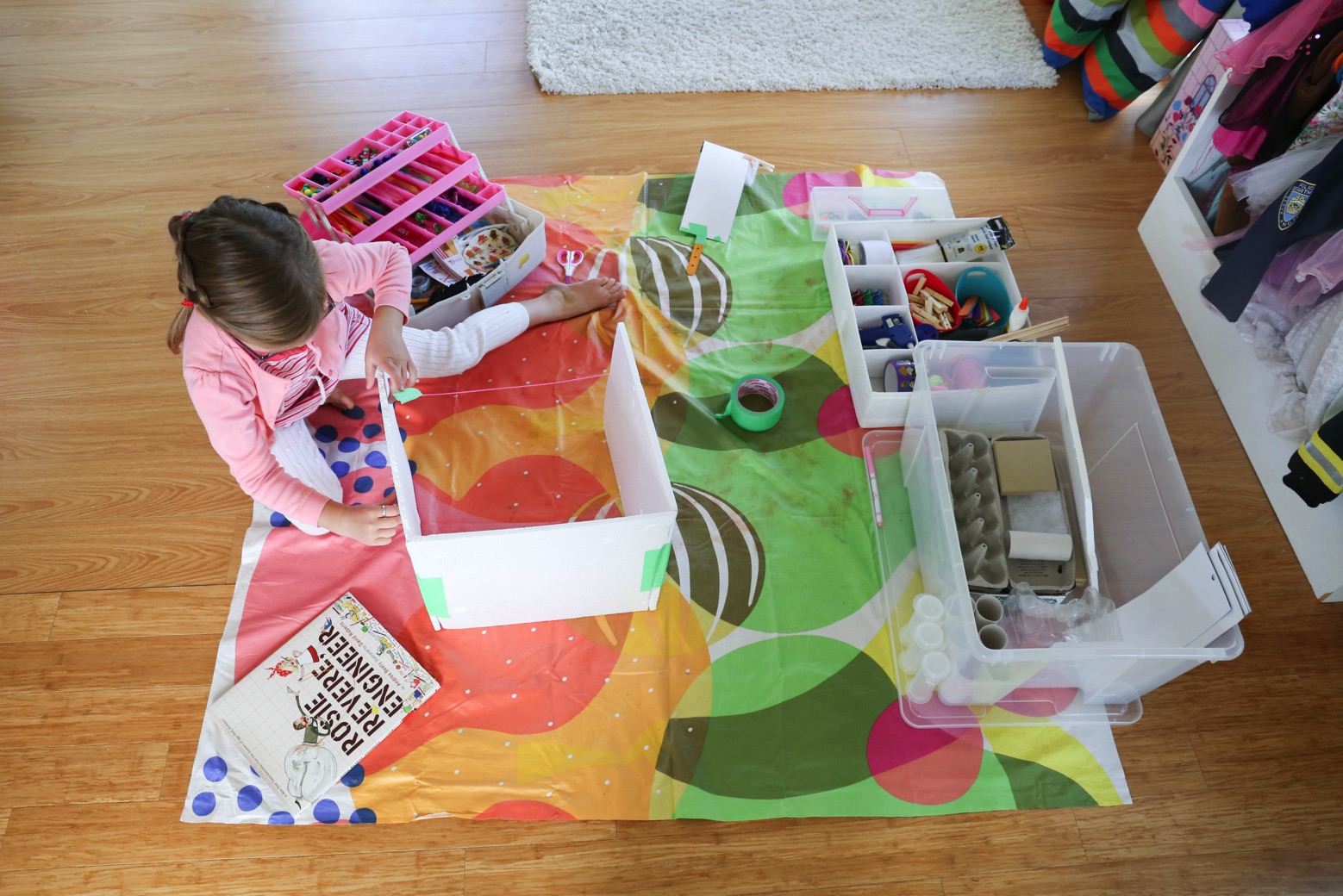 Part way through, she decided she needed a few more decorative items, so she retrieved her tackle box craft kit and used some goodies from there too. 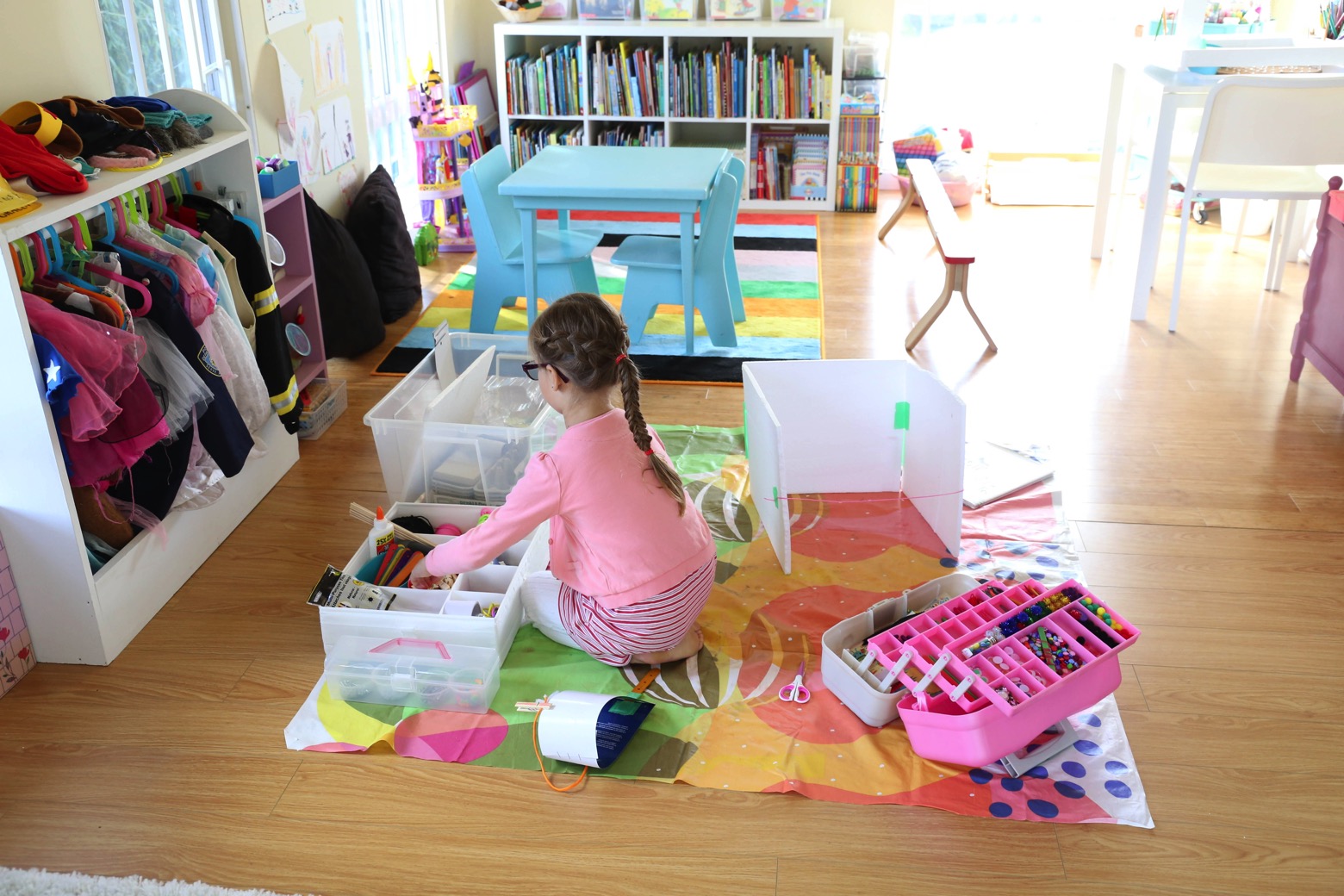 That being said, this inventing kit was around a long time and there were plenty of times when she had no idea what she wanted to build.  Sometimes she just started putting pieces together and figured out what it was along the way, sometimes she read one of the books for inspiration, and sometimes she went and did something else until an idea came to mind. 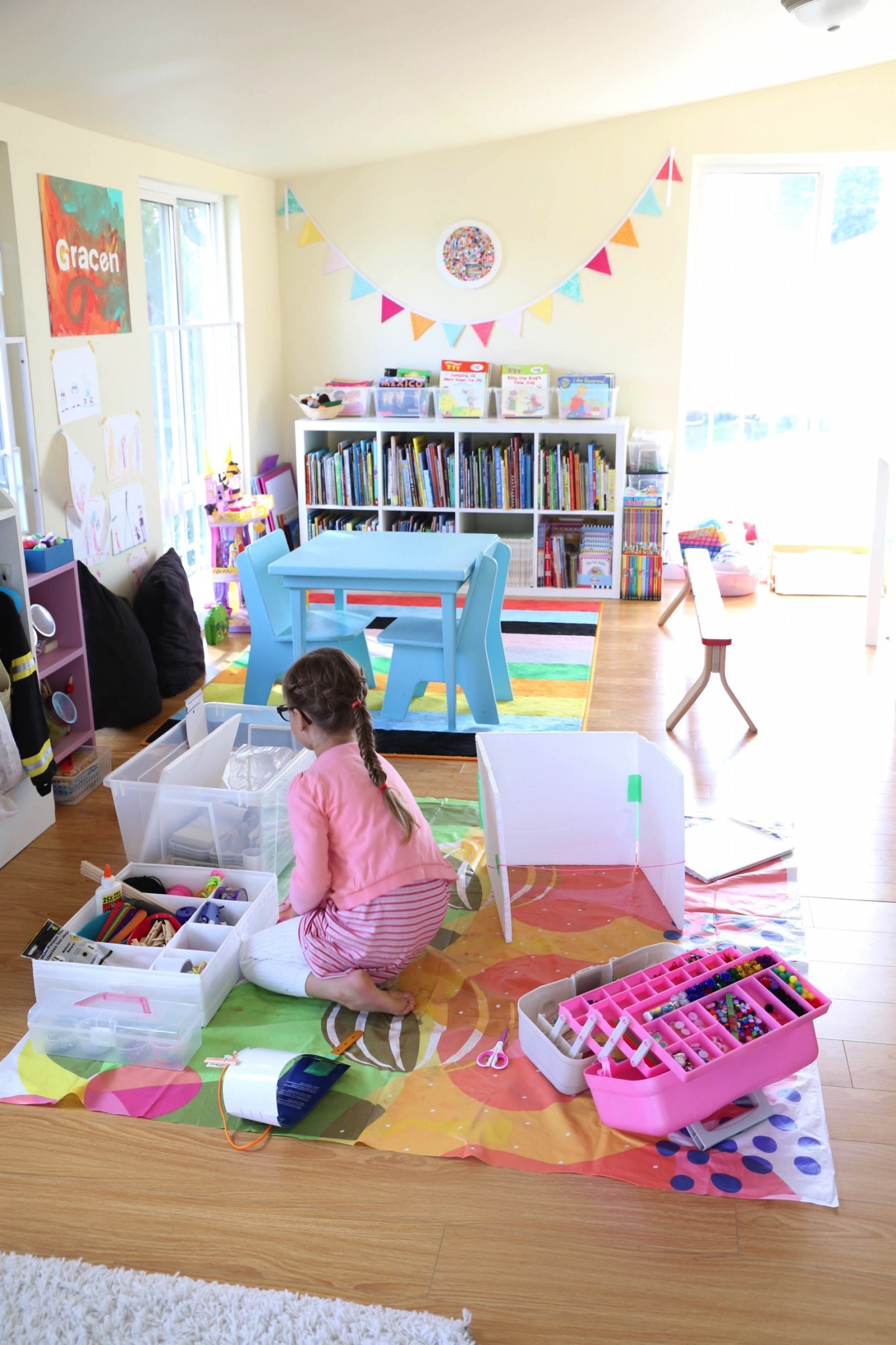 Either way, I really tried to give her her space and allow her creations to be completely her own when they came about. 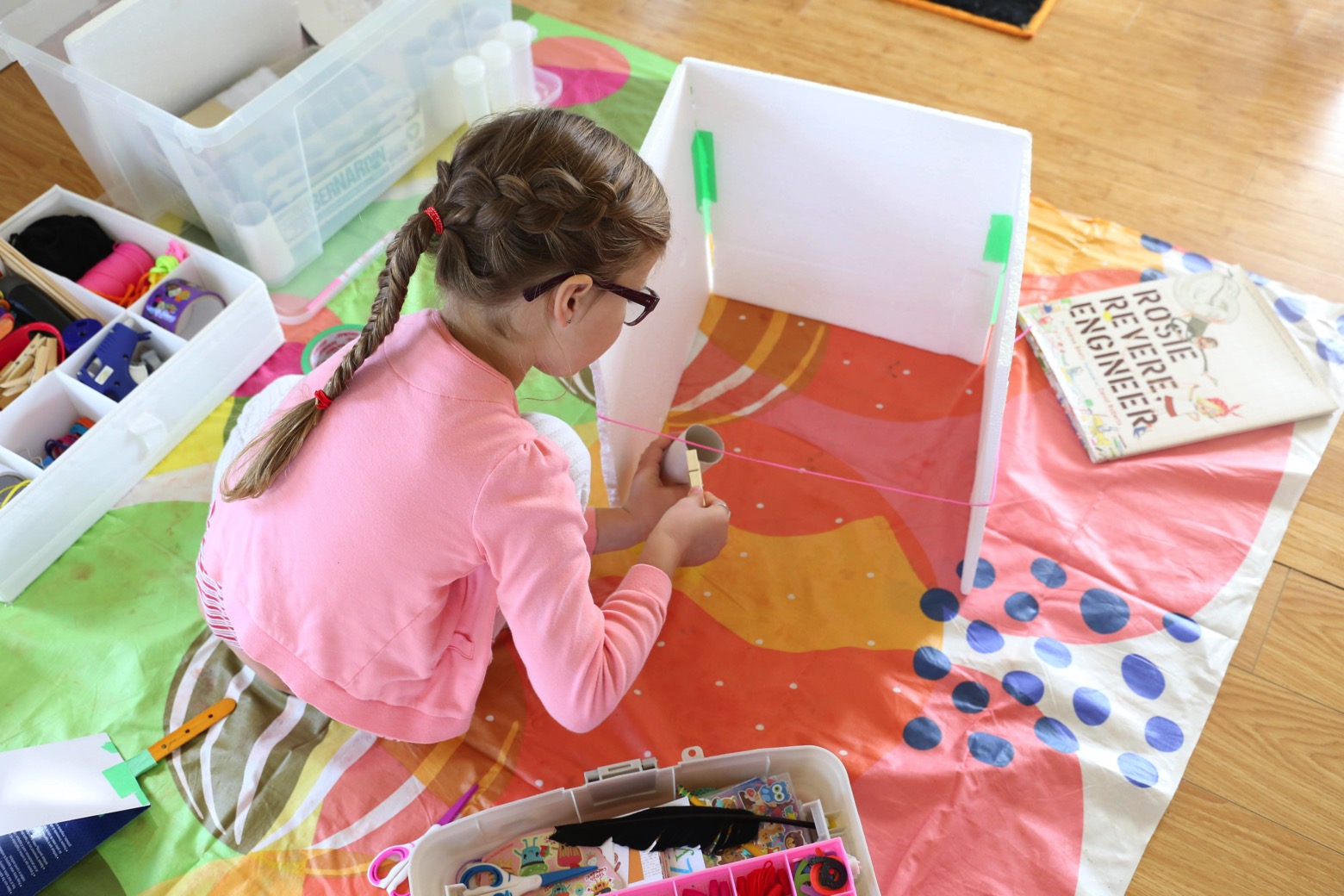 As for what we did with all of the inventions…  Well, each one stayed with us for a time.  Some went on display in her room, some in the office, and when we’d hit capacity or when something had been around for quite a while without any admiration, I’d ask if she felt like she needed to keep it or if she was ready to let it go.  Surprisingly enough, most of the time she was willing to let it go {and she’s a person who likes to hang onto all kinds of stuff for a very long time} and we’d take it apart, salvage whatever parts she could use on another invention and recycle the rest. 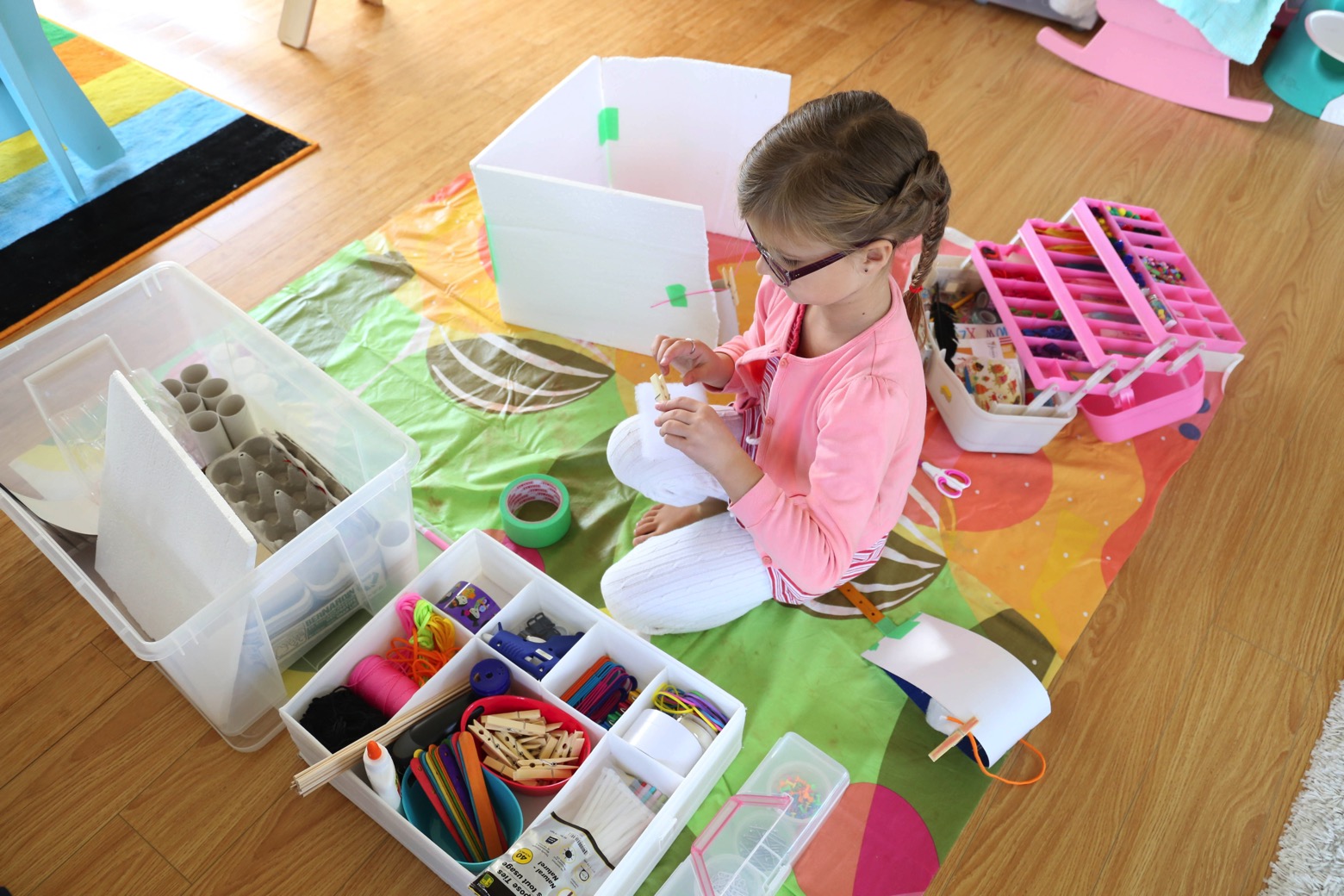 And while we did keep this particular inventing station out for a time, it just wasn’t something that could stay out longterm with our curious, put-everything-in-his-mouth little Sam around.

I really wish I  would have taken a proper photo, but eventually we moved everything onto our rolling Ikea utility cart to create a super portable, super easy to pull out / put away, inventing kit.  They’re not great photos, but you can see it in action in these Instagram snaps…

It worked perfectly because when it wasn’t in use, we’d simply roll it into the office {which was blocked off with a baby gate} and when Miss G wanted to work on her inventions, we’d roll it back out which was easy enough because everything was in one spot. 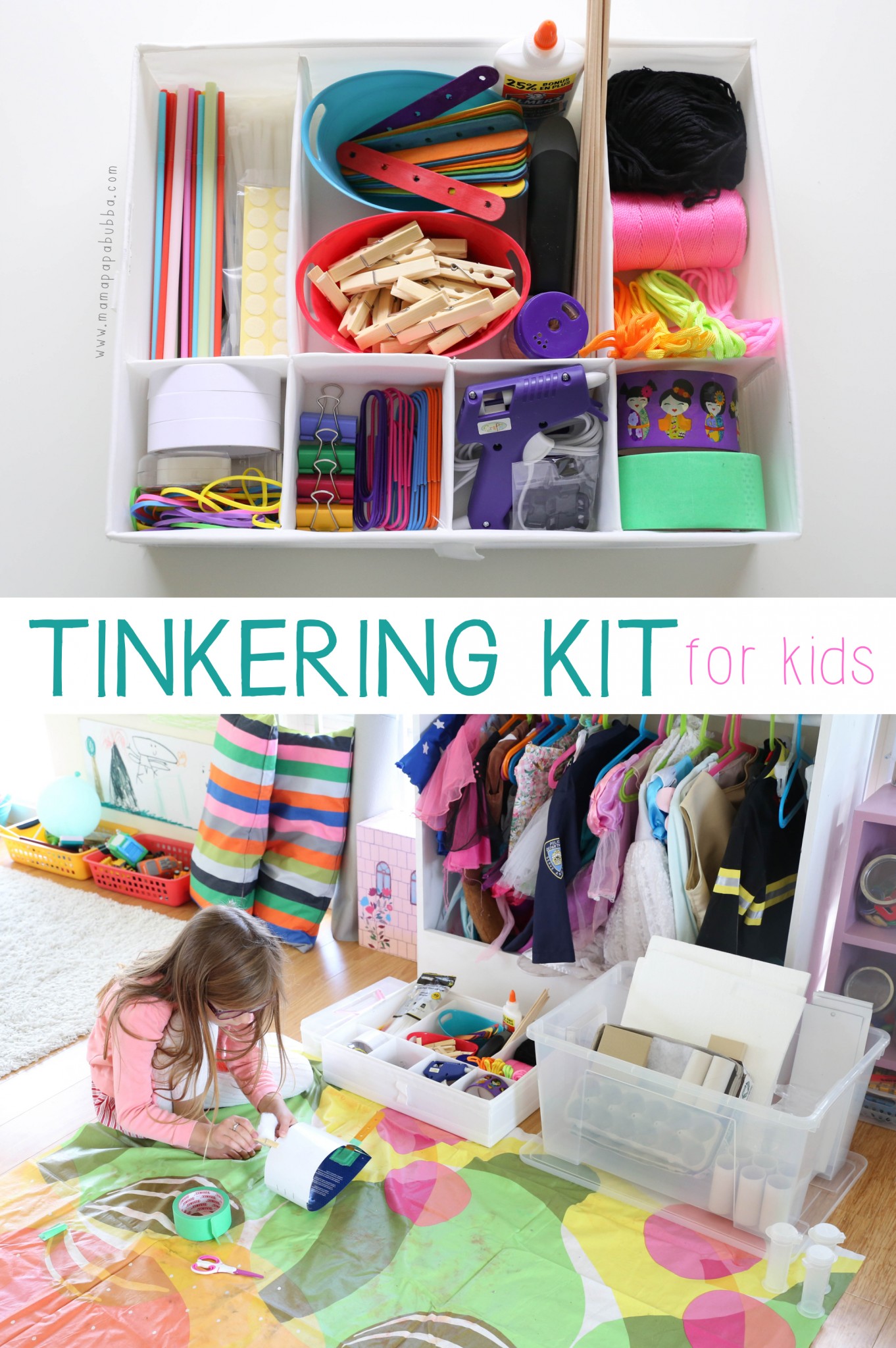 Now to re-put this together in the new house… 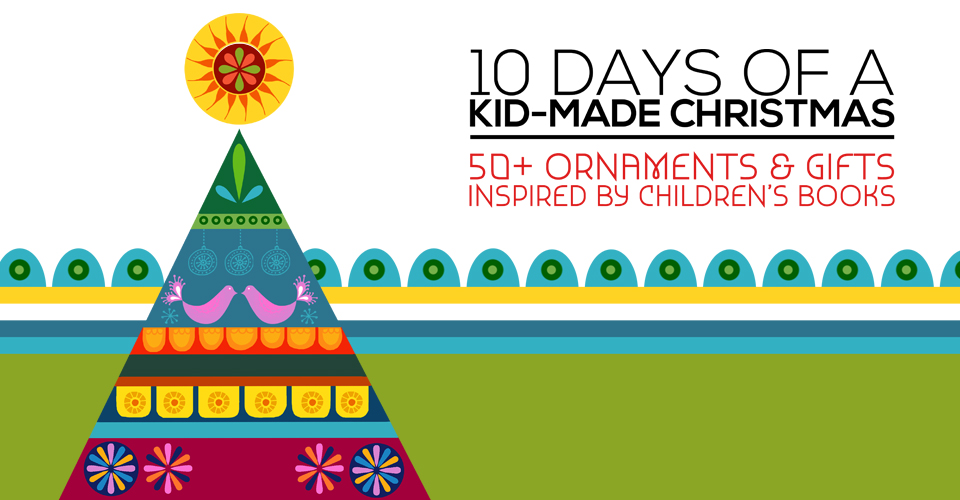 This Rosie Revere, Engineer inspired tinker kit is part of the annual 10 Days of a Kid-Made Christmas series.   My lovely friend Melissa of Mama Miss is sharing an awesome DIY tent kit inspired by another one of Andrea Beaty’s books – Iggy Peck, Architect – today too!  Pop on over to her site and check it out! #KidMadeChristmas

One thought on “Inventing Kit for Kids”