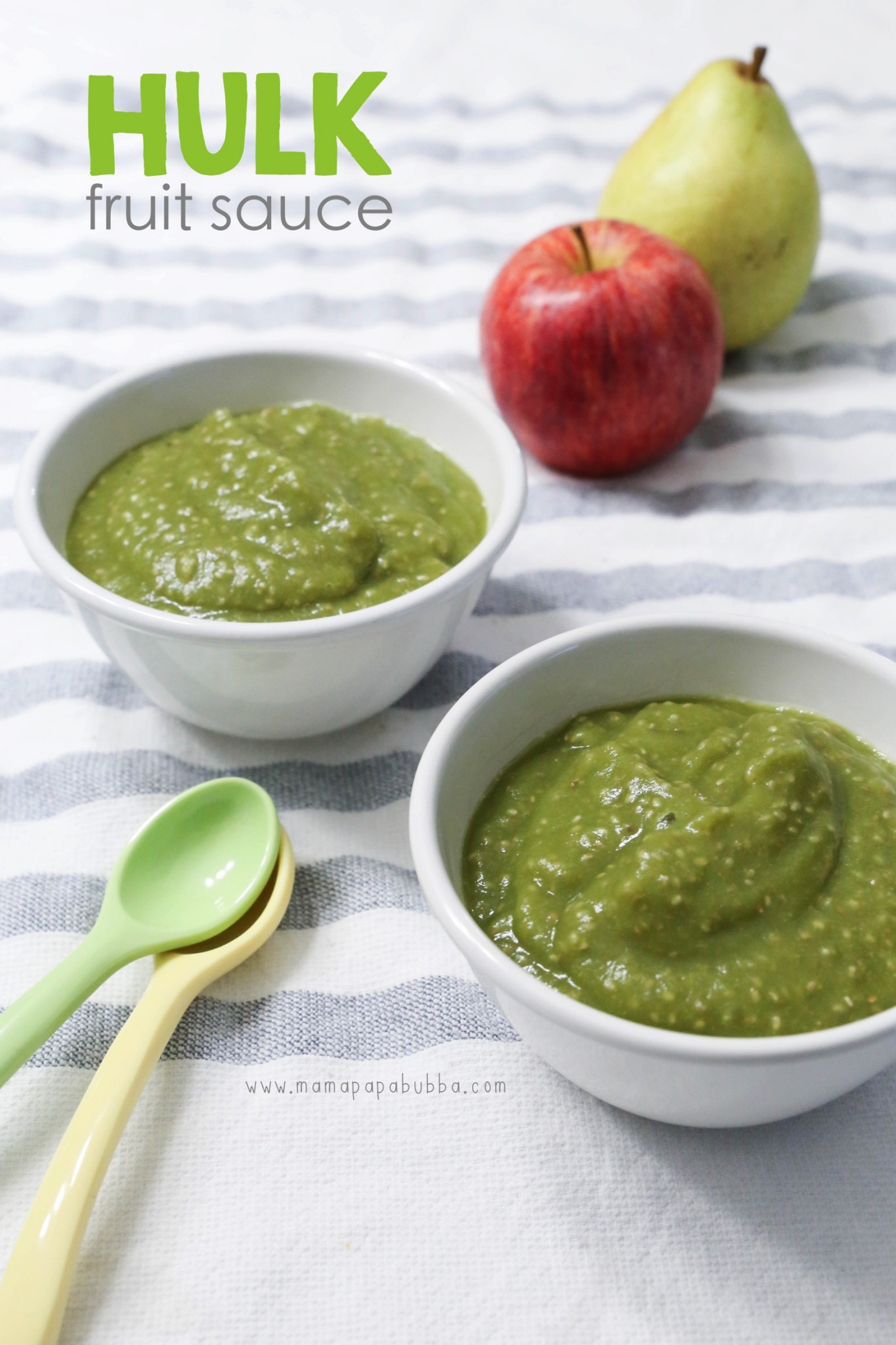 My goodness – this apple / pear / spinach / chia sauce has been on repeat like no other over the last few months…  So much so that it’s earned itself a nickname. HULK FRUIT SAUCE.  Hah!  I actually have no idea how that name came to be, but the Hulk is green, so…? 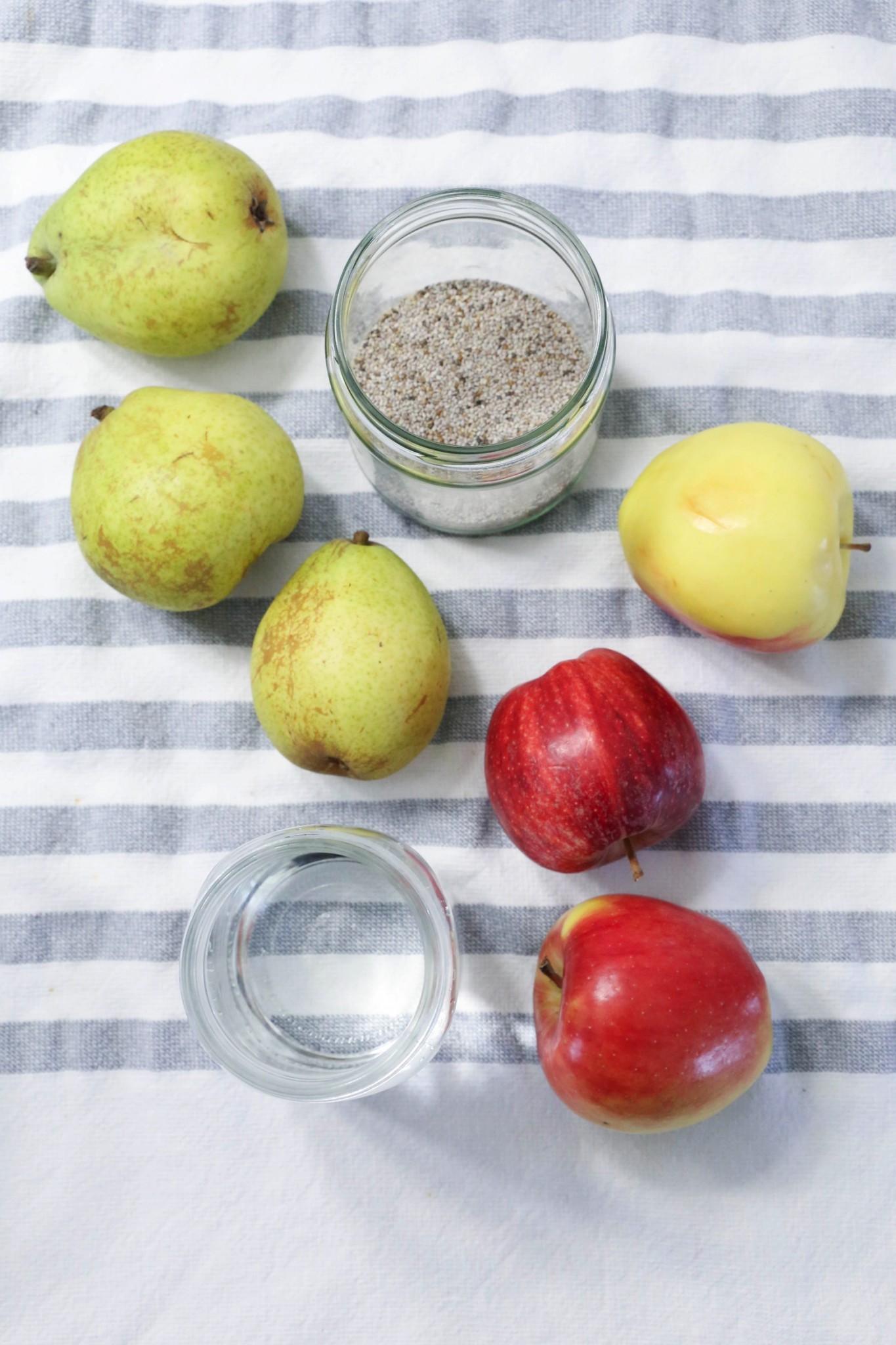 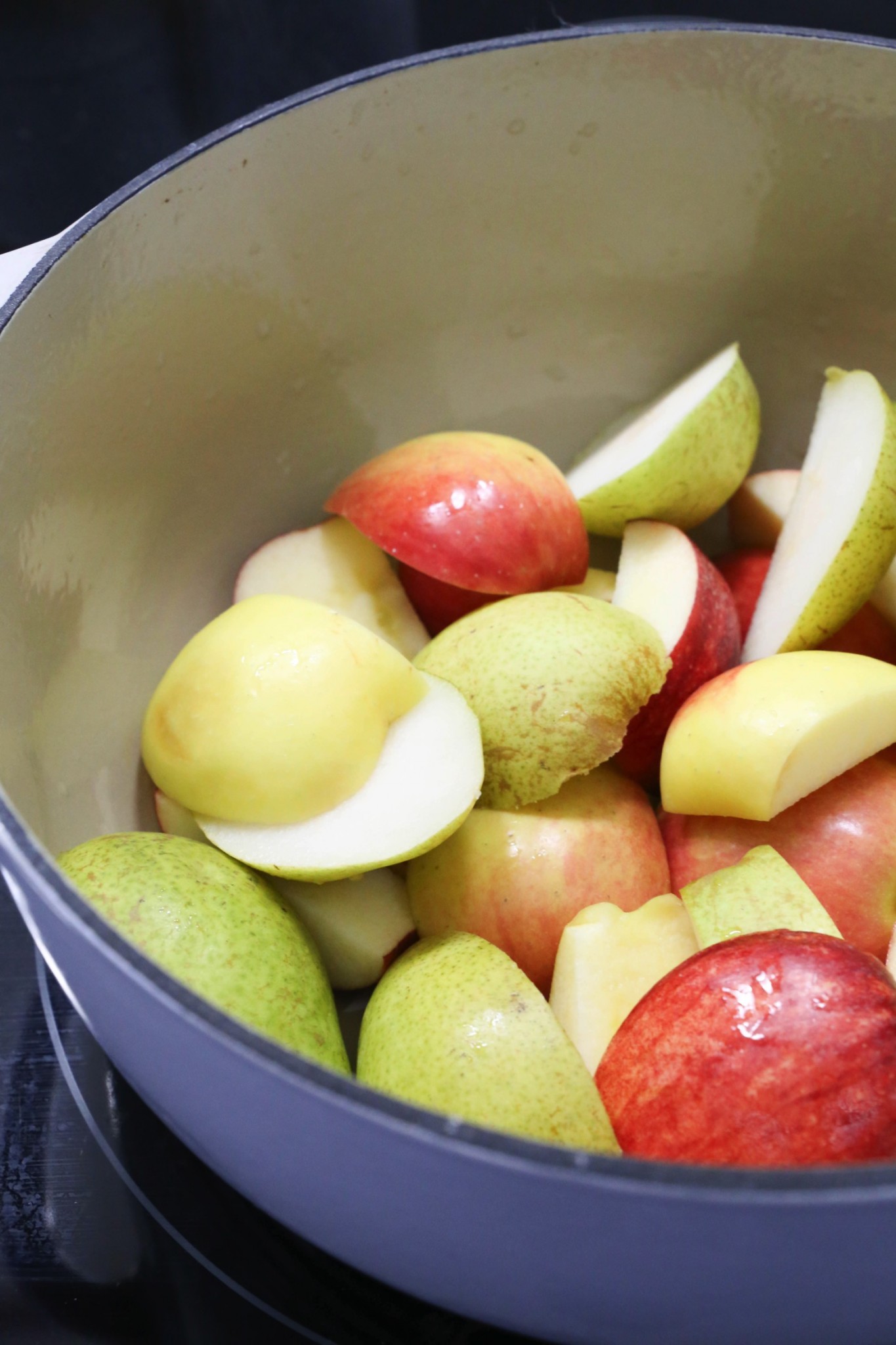 To make it, I basically very roughly chop up a bunch of pears and apples and throw them in a pot with a little bit of water. 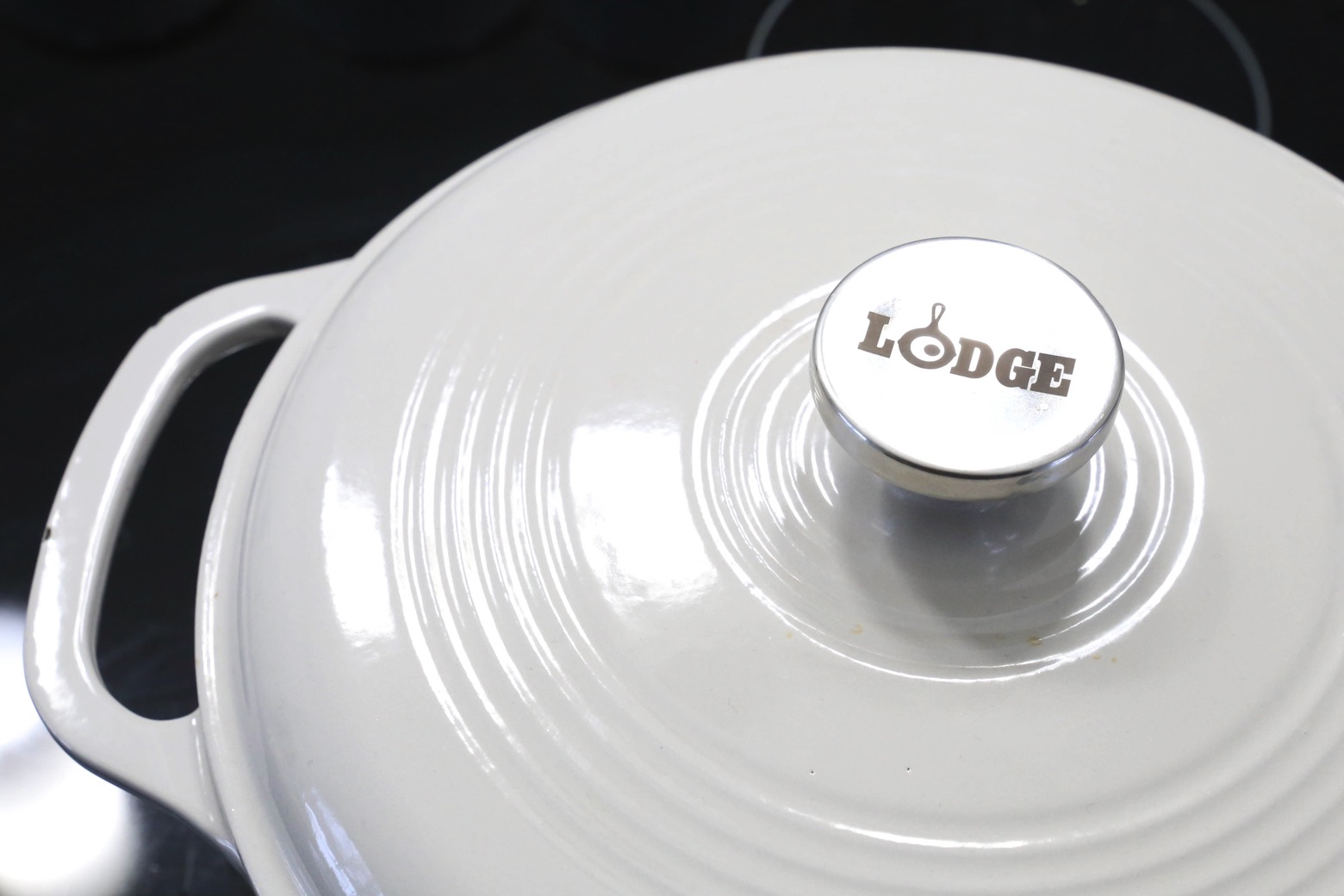 Then I pop the lid on and let the fruit simmer over low heat until it’s nice and soft.  {Sidenote: how pretty is my new Lodge Cast Iron dutch oven {CAN}?!  I loooove it and have basically not cooked in anything else since Christmas.} 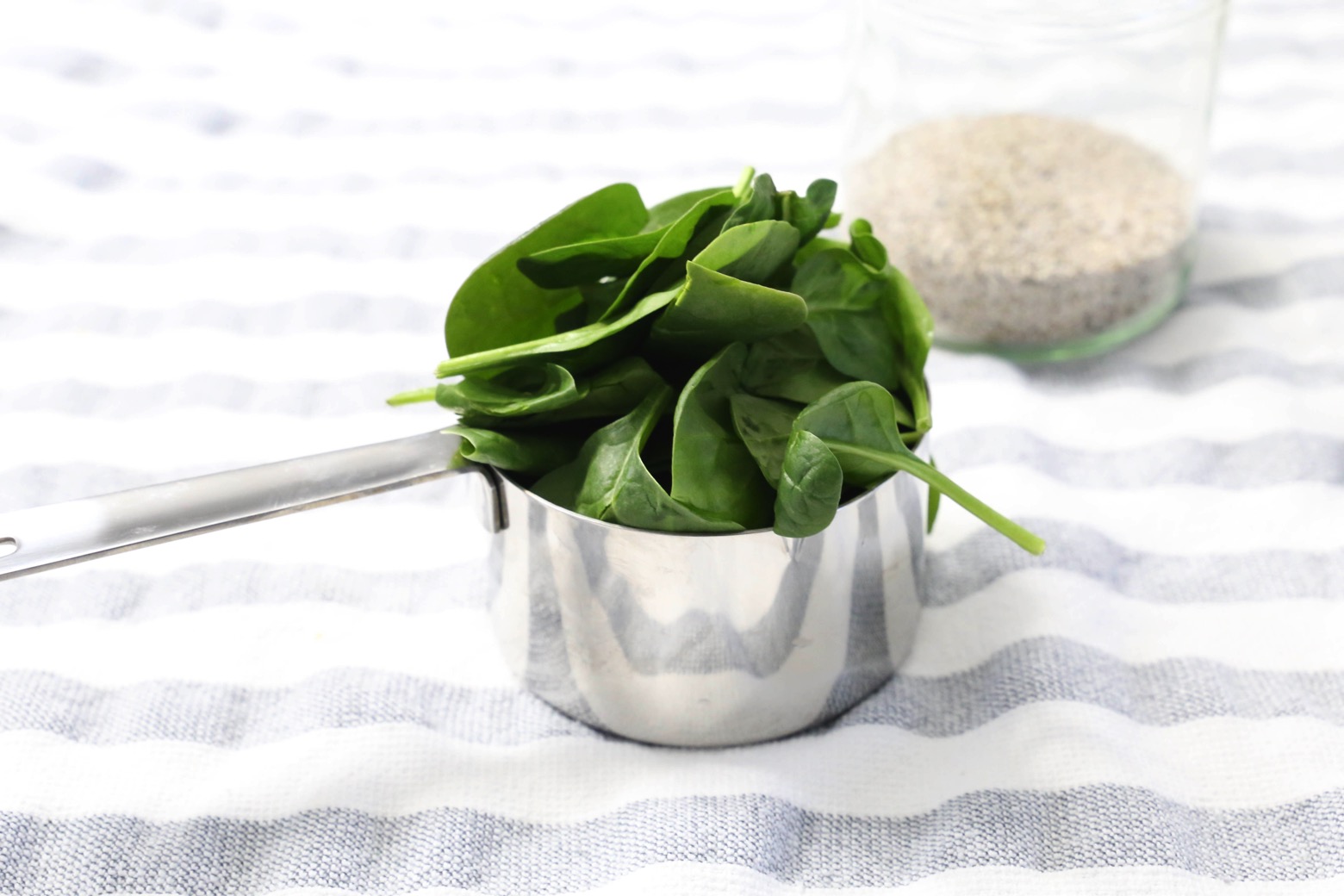 While the fruit is stewing, I get out my spinach and chia seeds.  I’ve been using white chia seeds {CAN} a lot lately, but the more common black ones would be just fine too! 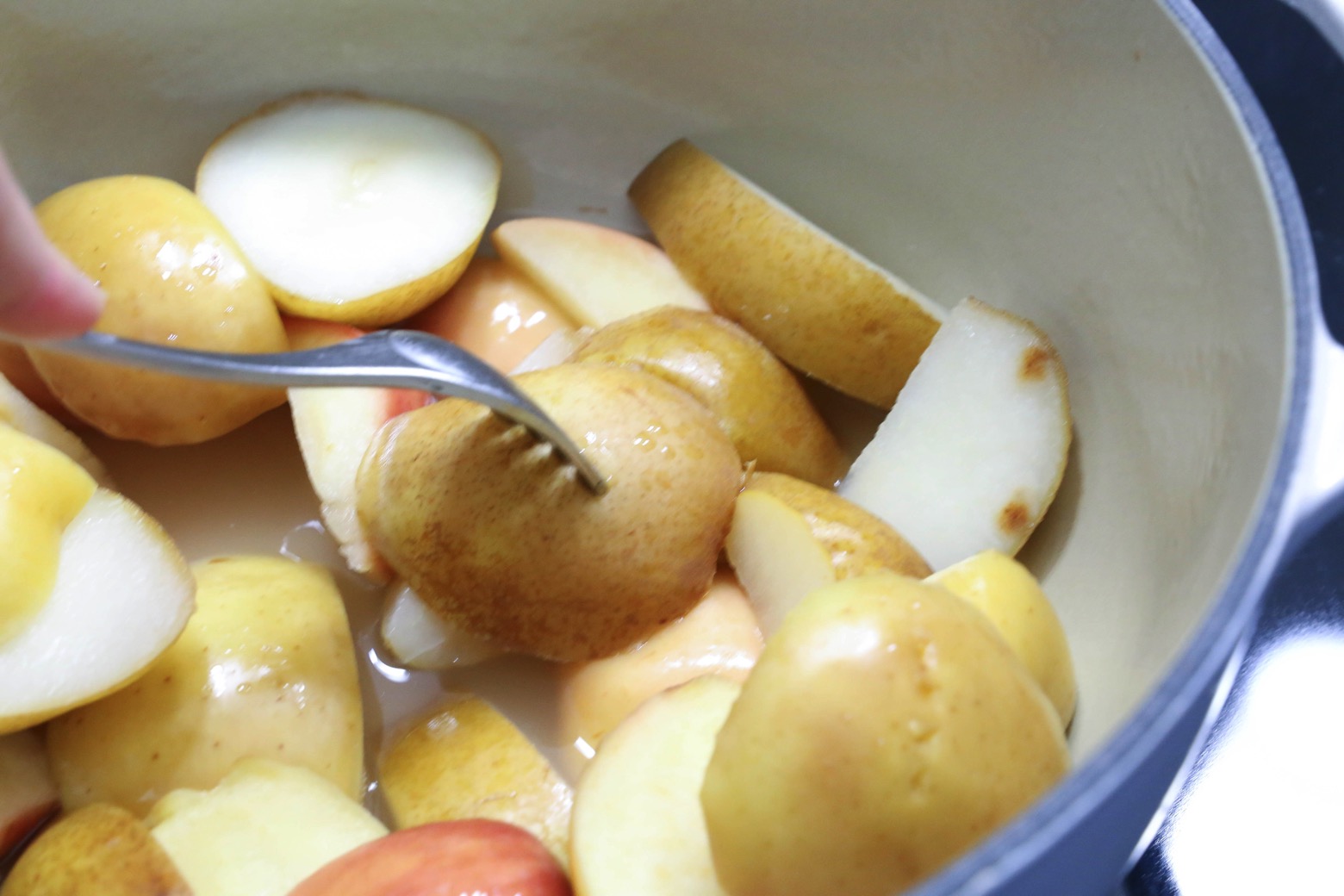 Every once and a while, I check the fruit for softness.  I like it quite soft and I cook it at a fairly low temp, so 20 minutes is usually right around the perfect amount of time. 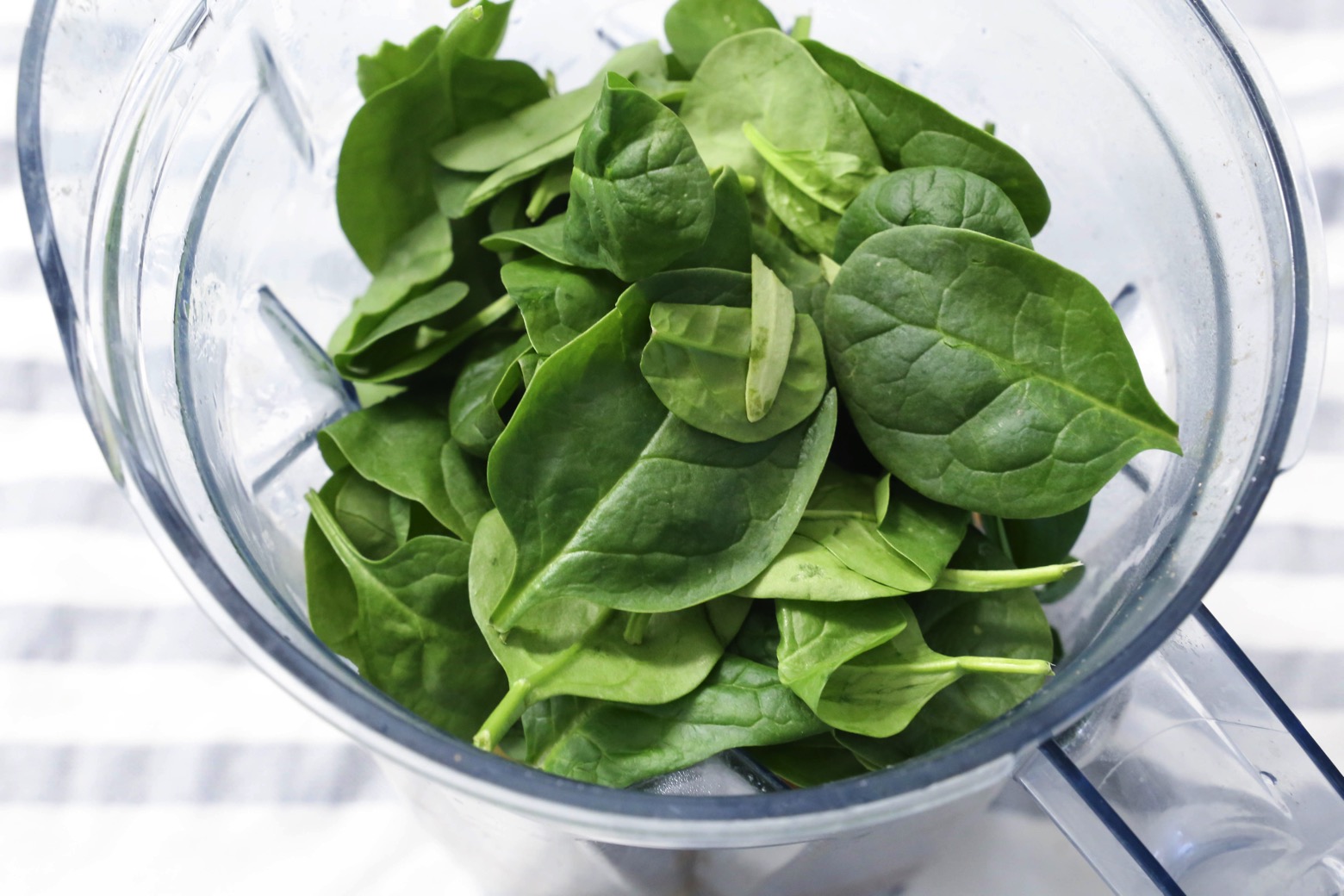 With the fruit nice and soft, I dump it, along with the excess cooking water, into the blender and add the fresh spinach on top. 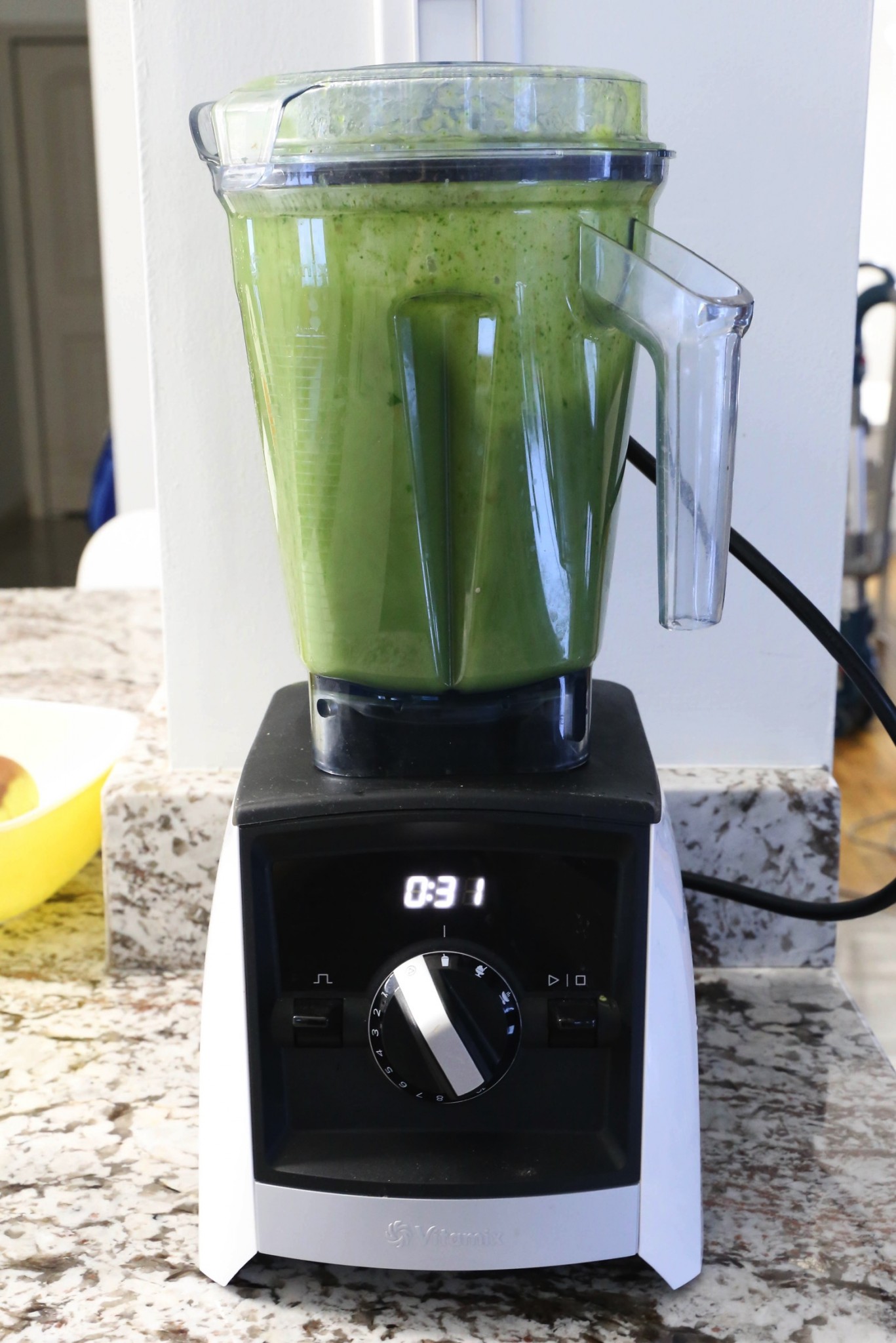 Then we blend until completely smooth {which means that I just use the smoothie setting on the blender we have}.

Now, while we’re on the topic, I get a ton of questions about our Vitamix and how we picked the one we did, etc. and the truth is, I didn’t pick it – Brad did!  I had wanted a Vitamix for years and years and actually very seriously considered buying one for KD 300+ (multiply that by 4ish for dollars *gasp*) from some sketchy little showroom in Shuwaik when we were first there, but I held off for years, then came home to Canada only to be completely overwhelmed by all of the options – hah!  B’s great at researching things before purchasing {sometimes painfully so} and is all about getting as much value for your money as possible, so he was the man for the job.  Basically I said ‘it has to be white!’ and left it to him.  The one he ended up picking for us is the Vitamix Ascent A2500 {CAN}, which I *think* was the best one before getting into the touch screen options.  Either way, I absolutely love it.  Like I’ll never be without one now.  Can you believe that you can put raw veggies in it, turn on the hot soup mode, and it’ll blend and heat all at once and leave you with a piping hot, ready to serve soup or sauce?!  Seriously.  Mind blown. 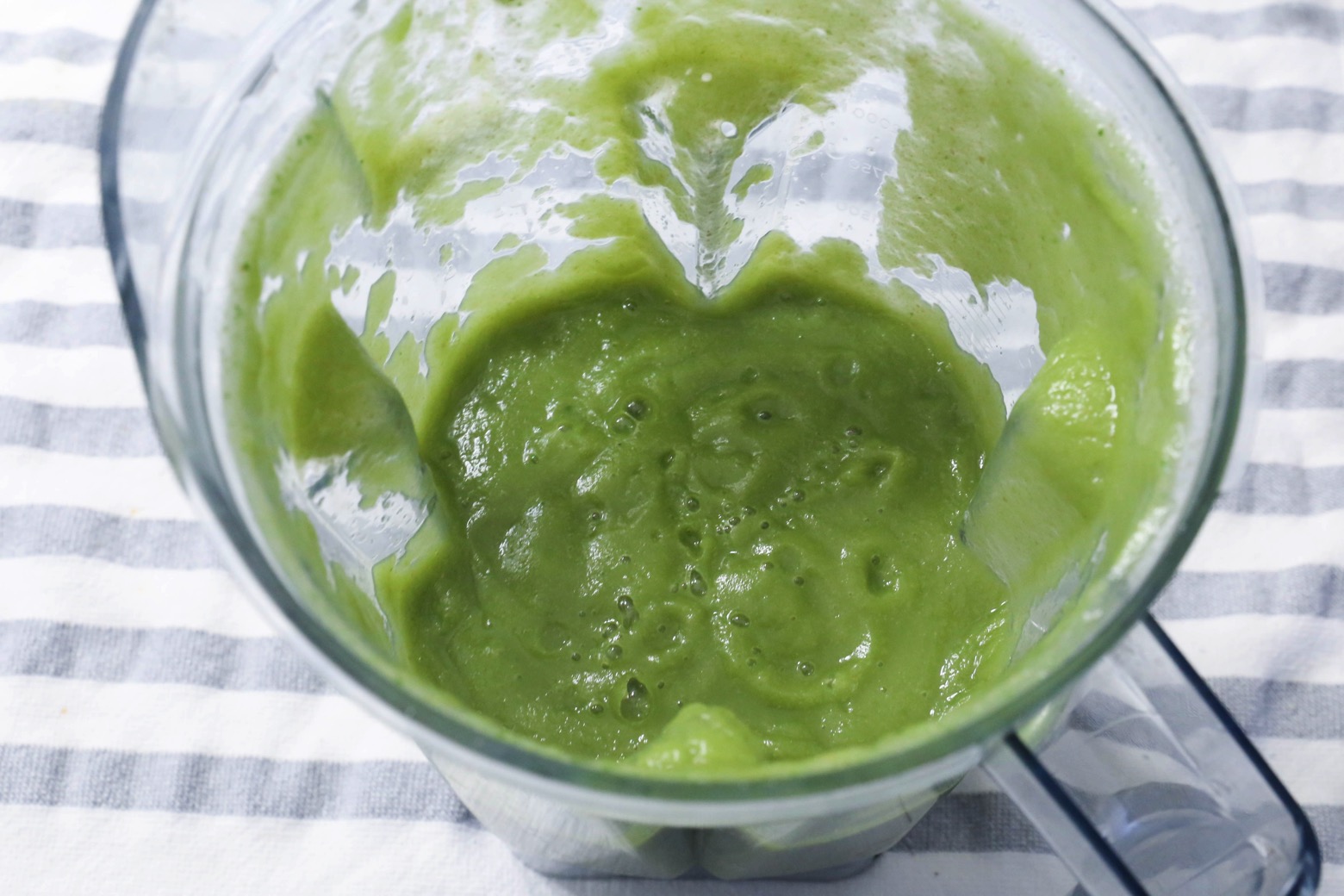 And just check out how perfectly smooth and uniform that fruit sauce is! 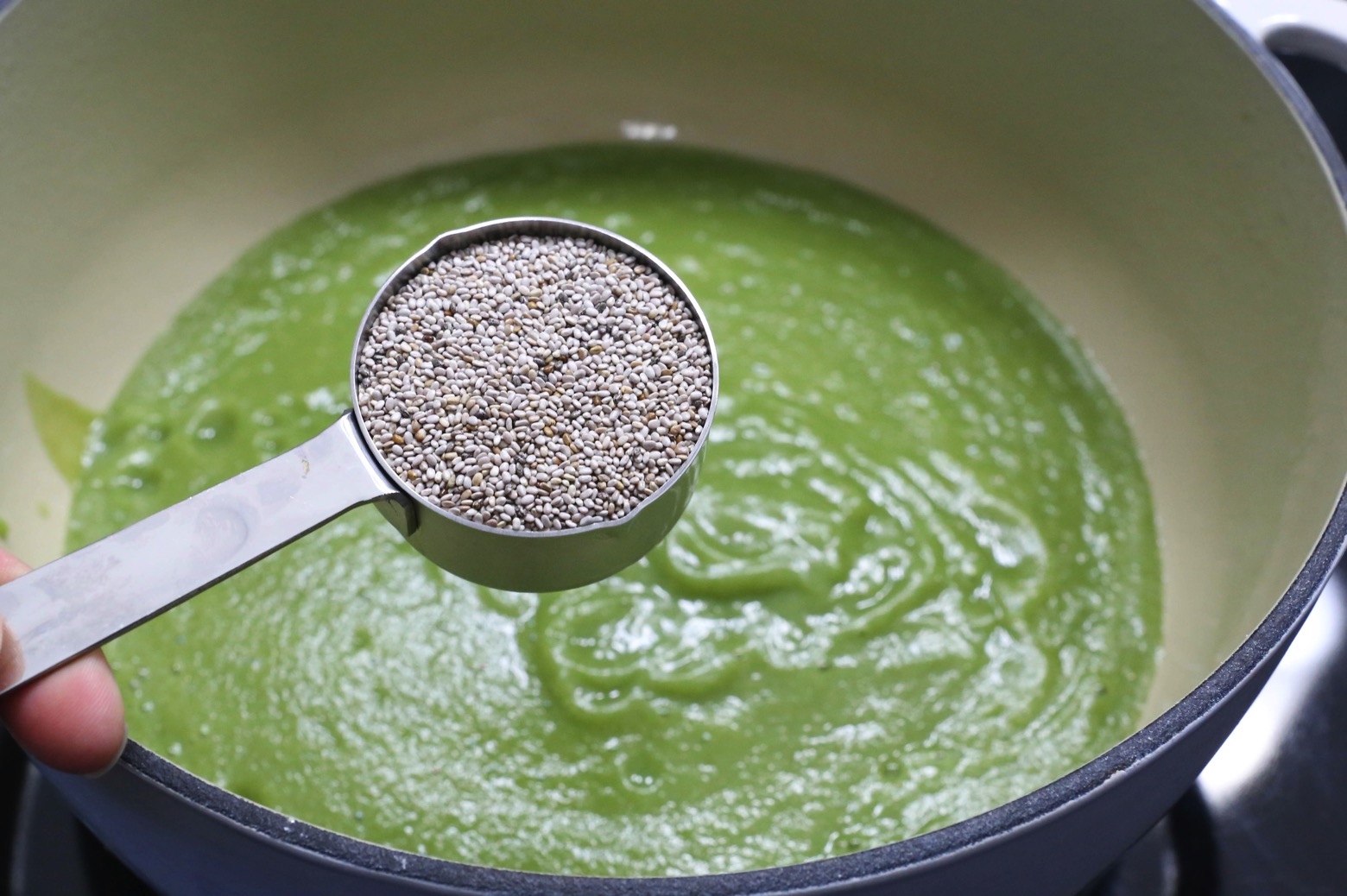 Afterwards, I add some chia seeds and gently stir them in, allowing them a little bit of time to swell. {If your kiddos aren’t crazy about the texture chia adds to the sauce, you can also put them into the blender with the stewed fruit and fresh spinach and blend them up completely.  Up to you!} 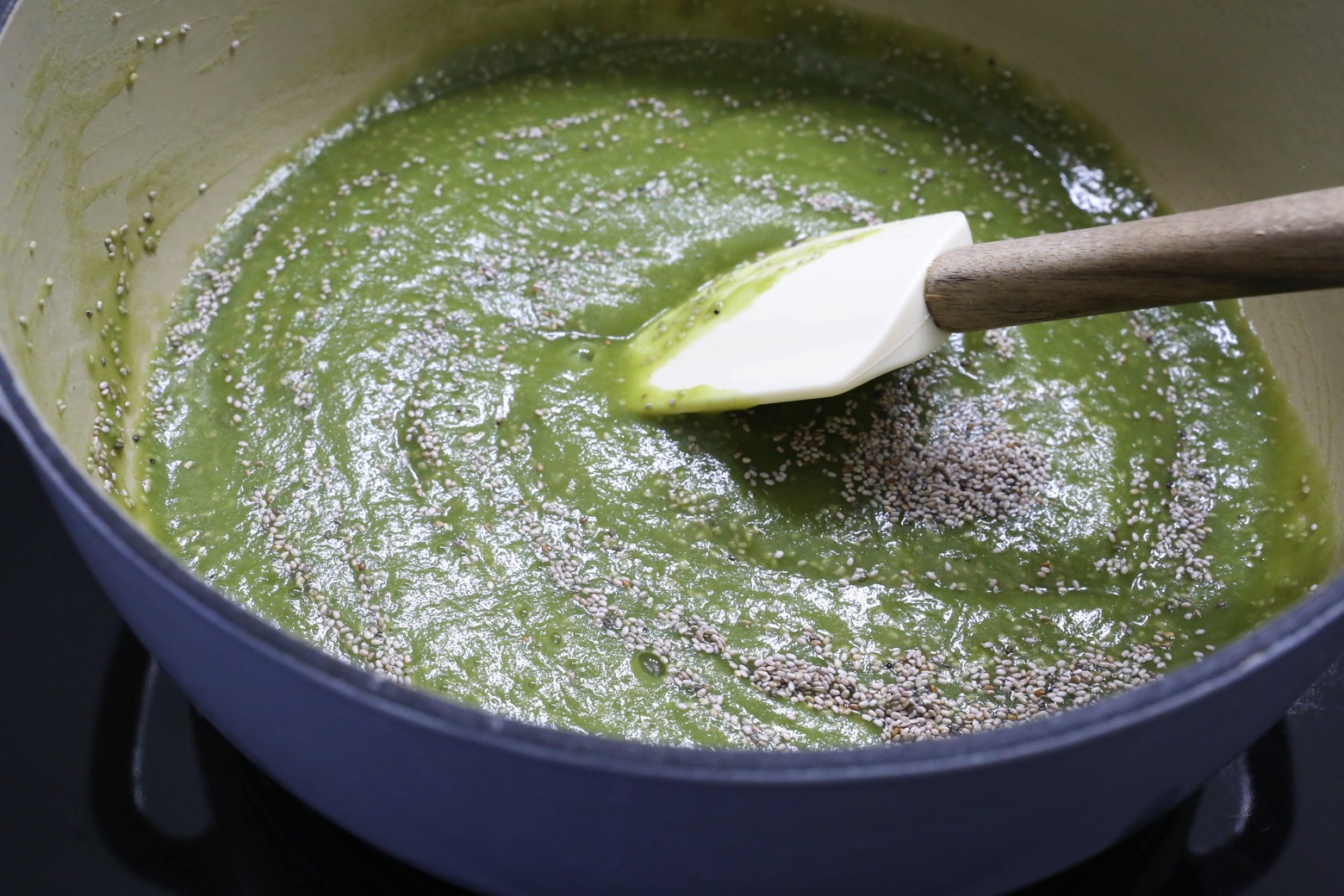 Sometimes I do this straight in the blender and other times I do it in the dutch oven, just depends on how I’m feeling on the day, I guess. 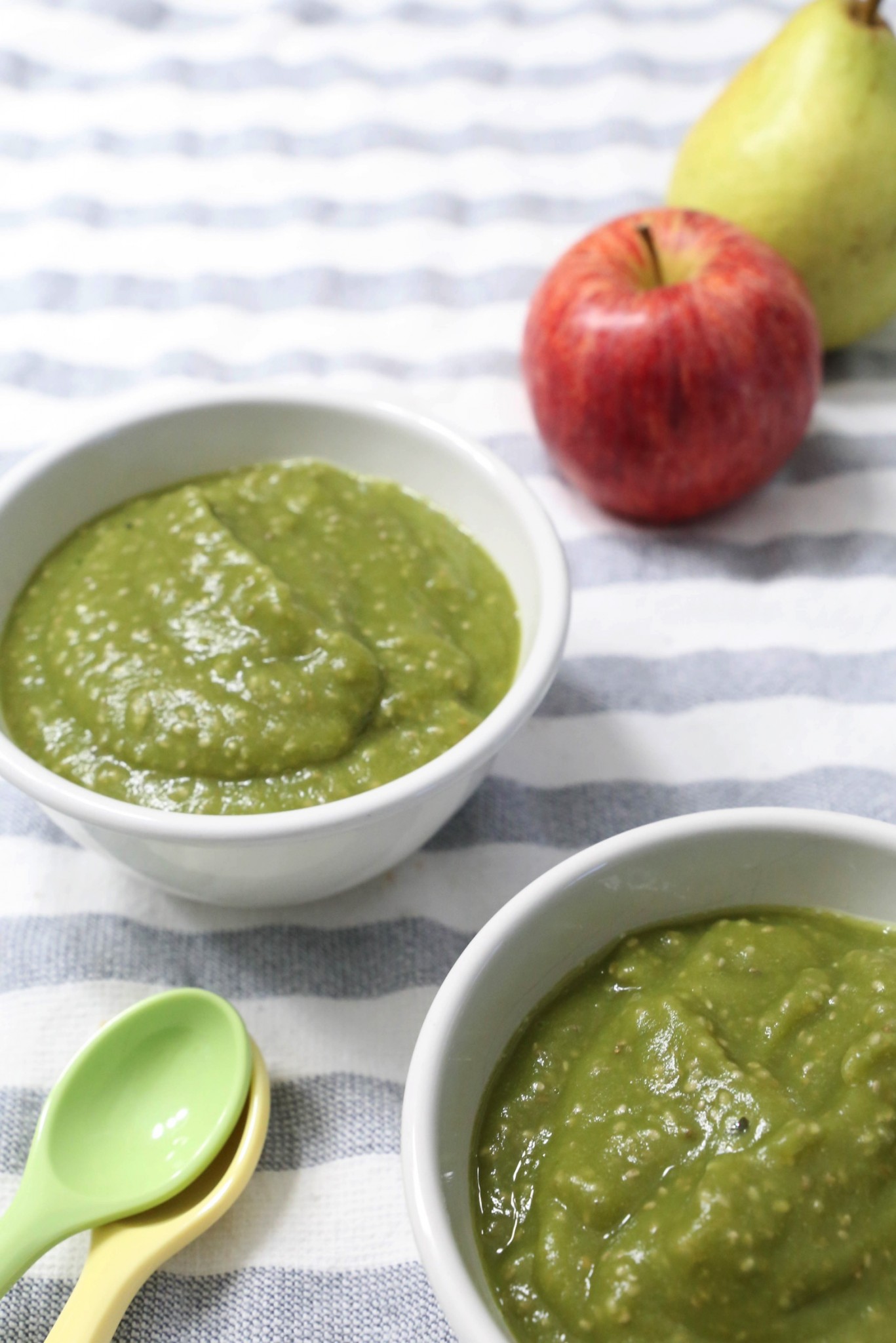 Here’s what it looks like when it’s ready to serve. A bit Hulk-ish, I guess?  And of course just like with smoothies, all you can taste is the fruit – the spinach just disappears into the other flavours! 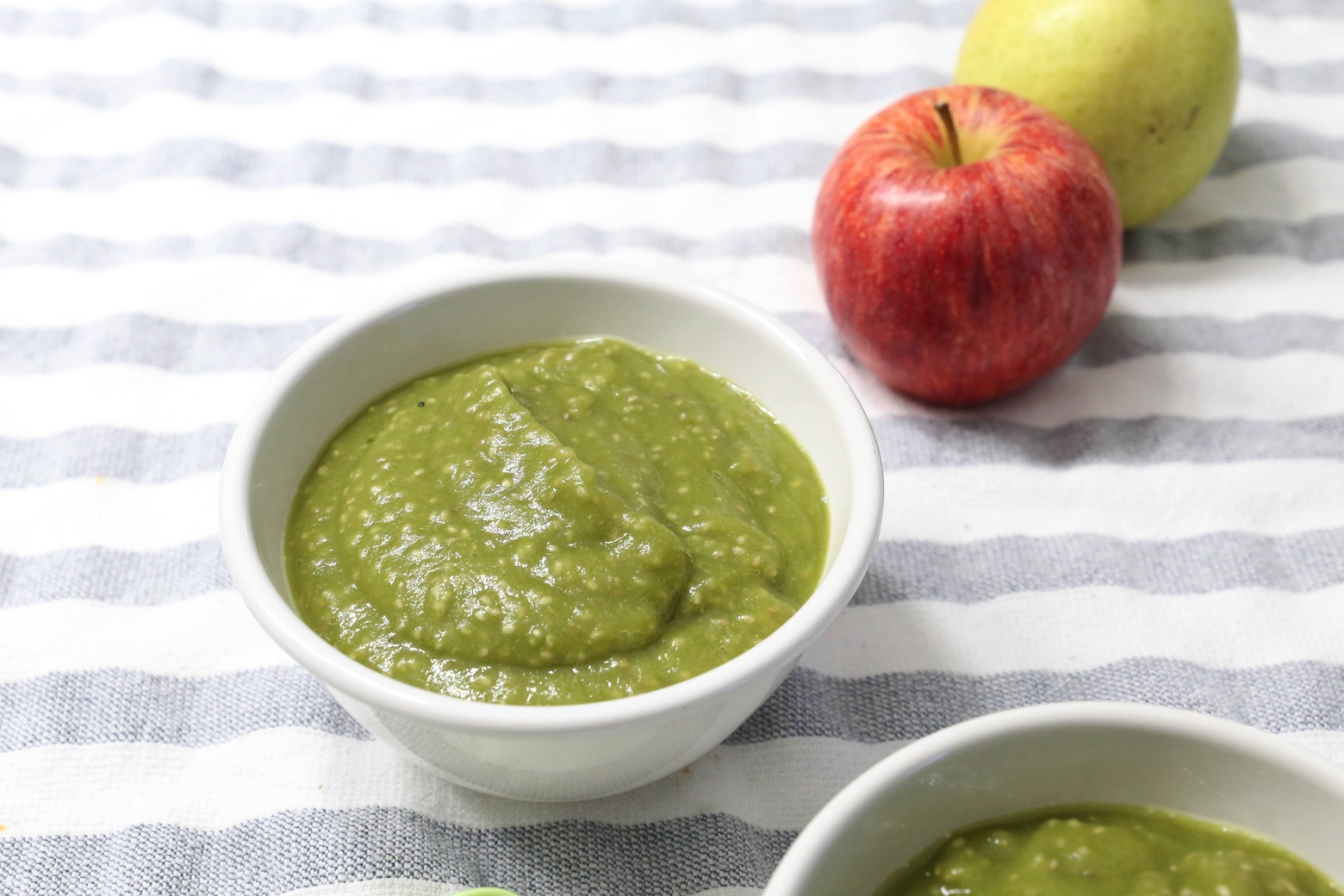 I often serve it still warm, but both Grae and Sam love it cold and straight out of the fridge too. 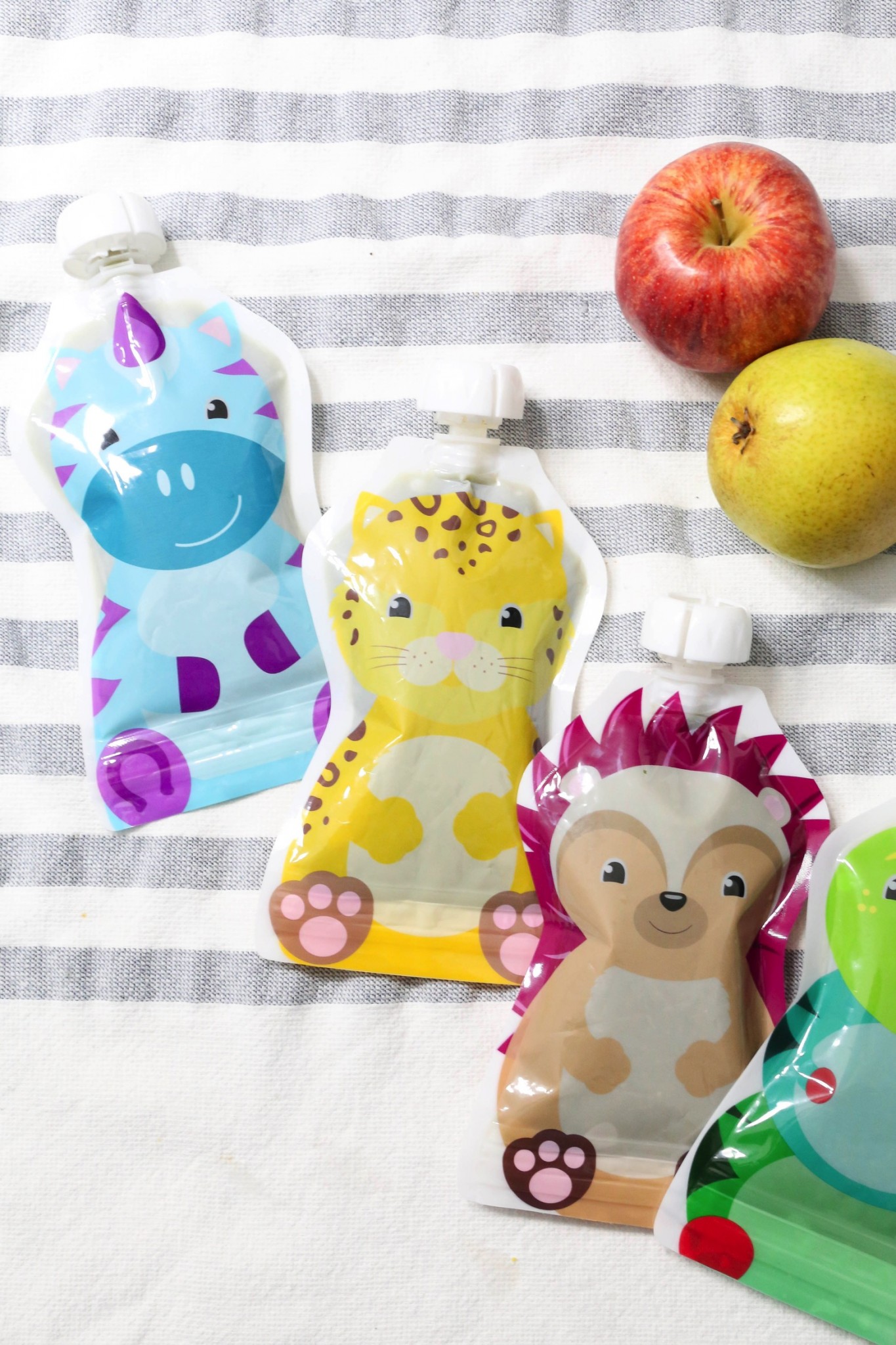 While I usual pack whatever’s left in little mason jars {CAN}, lately I’ve been making really good use out of these ChooMee reusable pouches {CAN} Sam got in his stocking a couple of Christmases back and they’re so convenient!  Both of the kids love them {though G won’t take them to school as she feels like pouches are too ‘babyish’ for school *sigh*} and they’re so easy to pop in the diaper bag or have the kids help themselves to.  Highly recommend. 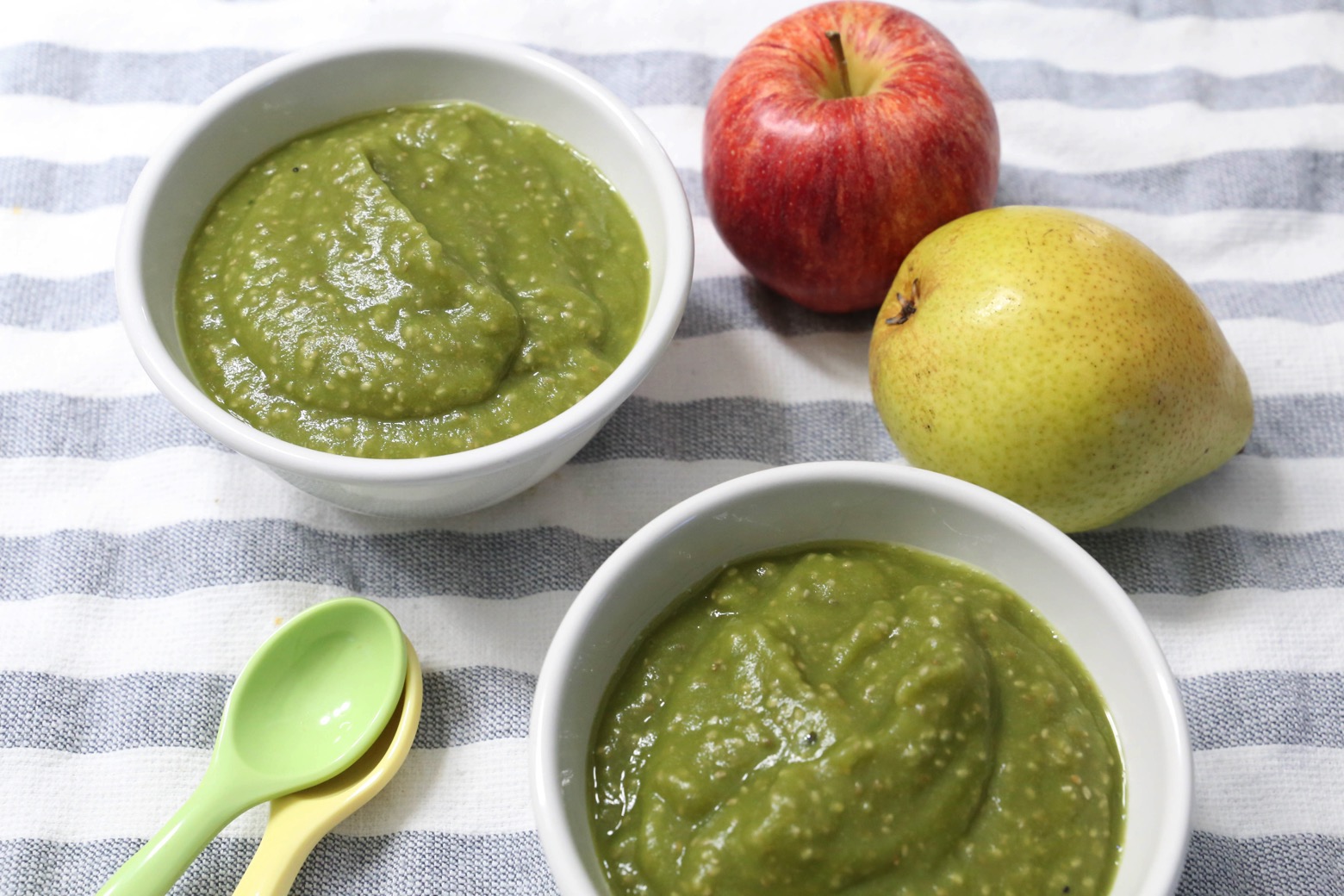 Place apples, pears, and water into a pot and cover with a lid.  Bring the water up to a simmer and let the fruit cook on low to medium until soft (approximately 20 minutes).

When soft, transfer the fruit and the excess cooking liquid into a blender and blend until smooth.  Stir in the chia seeds and allow them some time to swell and the sauce to cool.

Serve still warm or refrigerate until ready to use.