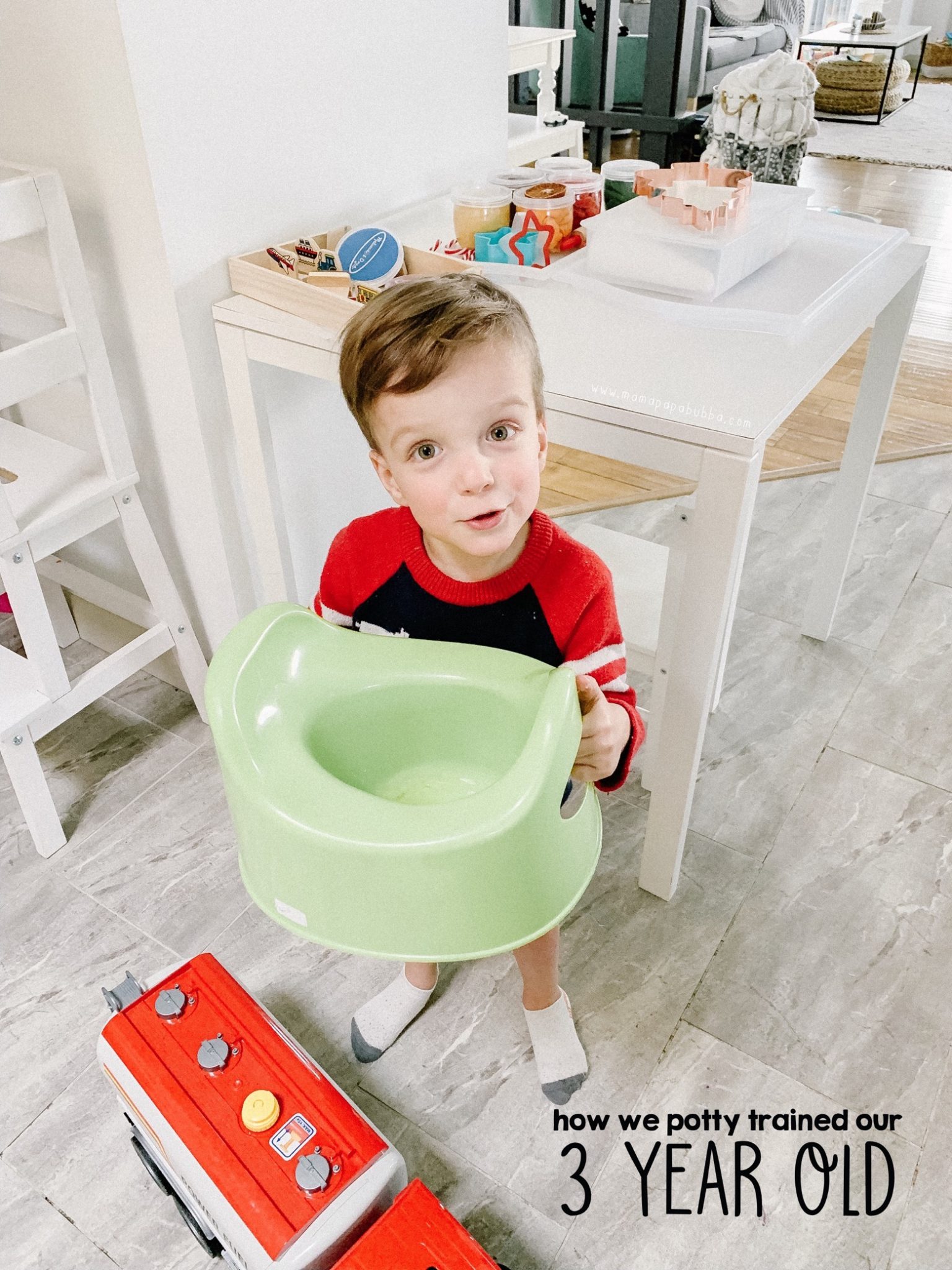 Welp, we’re officially through 10 full days of potty training and I have to say – it’s been much easier than I expected it to b {yay!}  At this point Sam’s back to wearing bottoms at home, we do the school run and things like grocery shopping without any worry (I’ve even forgotten to bring along the diaper bag and a change of clothes several times – eep!), he’s happy to use a regular toilet both at home and while out, and we’ve only had 3 accidents throughout the entire process (2 of which have been this weekend while we’ve had family staying with us and I’ve had my hands full with other things / he’s been off running around with his cousins). That being said, number twos still definitely cause some anxiousness, but I think we’ve discovered what makes them easiest for him.  We’ve been snacking on a few prunes each day to keep things…*ahem*…’soft’, and some privacy seems to allow things to happen, so we’re going with it.

I’ve had soooo many people over on Instagram ask me to share exactly how we’ve done it, but before I do, know that I am absolutely not an expert or medical professional for that matter. I’ve never even read a single potty training book in my entire life! I did successfully help Miss G to use a toilet at a very young age and I have helped several families I nannied for potty train their kiddos – but that’s the extent of it.  Also, every kiddo is truly different.  What worked for Miss G {and had her completely out of daytime diapers by 13.5 months old – check out how little she is in her underwear} absolutely would not have worked for Sam.  Our method is simply based on what I felt would be best for Sam, and it’s definitely not a one-size-fits-all sort of situation. 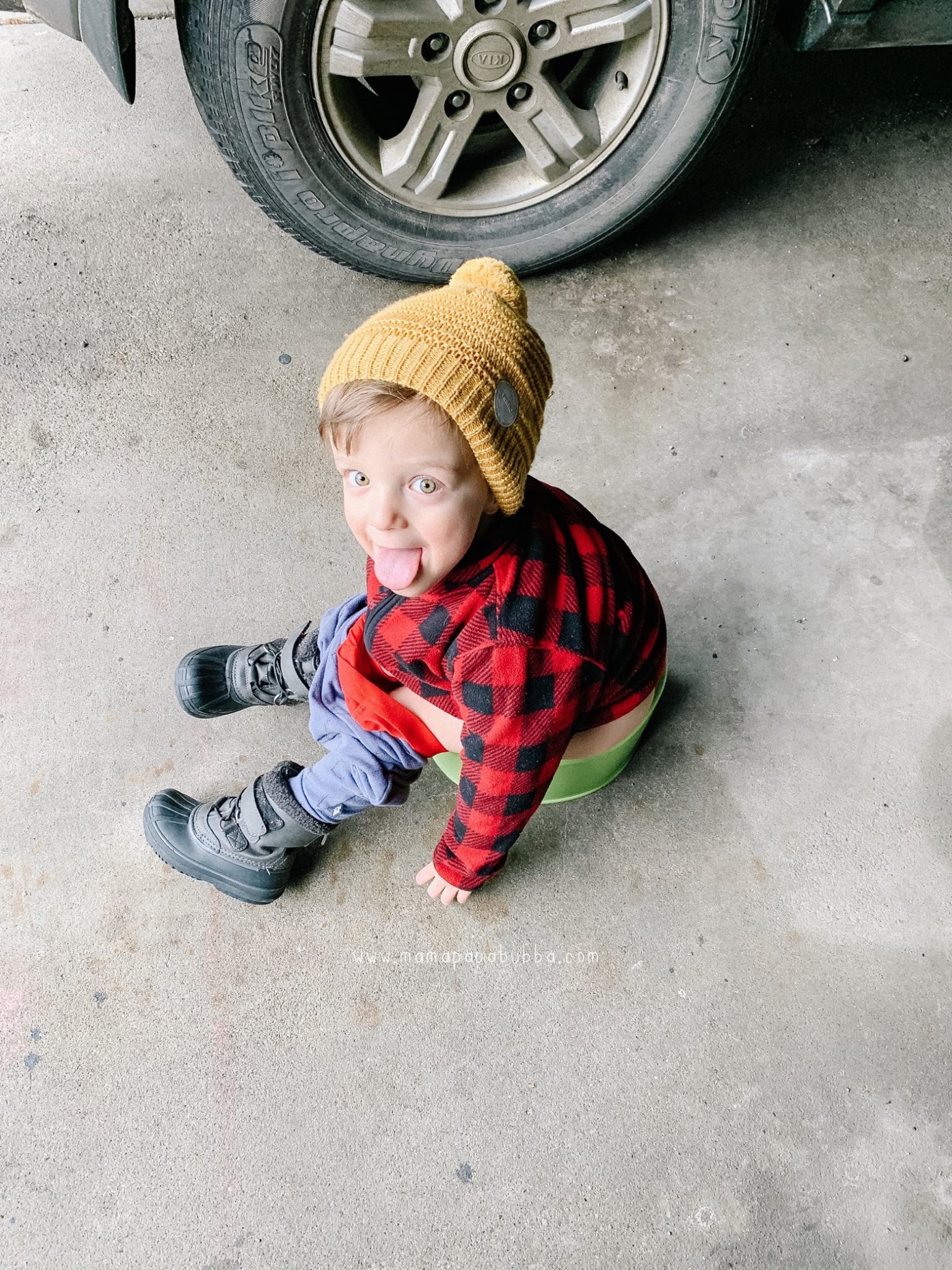 With that said, here’s what we did do:

– We started talking about using potty, we put potties out in the bathrooms, and we started ‘sportscasting’ our own potty processes (sounds soooo silly, but never underestimate the power of modelling!) months in advance just to get the conversation going and ‘normalize’ the process.

– We waited until Sam was 3 and we felt he was truly ready. He was at the point where he would be going in his diaper and proudly announcing, “I’M PEEING!!” and was also completely open to the process. In fact, when I thought he might be ready back in October and put the feelers out, he became super anxious and resistant and I immediately knew it wasn’t our time just yet.

– We decided on a day and got prepared the day before. We didn’t need anything we didn’t already have in order to start the process, so this was as simple as letting him know that the following day would be the day and chatting about it in a really fun and positive {but genuine} way.  “Tomorrow morning we’re going to start using the potty.  I’m so excited for you!”

– On the big day, we put potties out in the main rooms of both floors of our house and got a big bucket of water with our favourite cleaner in it out and ready to go.  When we were all set up, we took off his diaper and started with sitting on the potty right away, which earned us our very first ’success’.  On that day (and for the next few days), we kept the house warm and Sam naked from the waist down, we stayed super close to home, and I just reminded him that when he had to go, the potty was there and I was ready to help.

– When he went, we danced, cheered, and highfived in celebration, then we’d dump the potty into the toilet and he would say goodbye and flush. (We really only had one accident in those early days, but when he did, we didn’t make a big fuss about it – we simply said, “Oops! We waited too long – next time we’ll get to the potty sooner”, and then cleaned it up and moved on. All things potty were kept light and positive).

– On day 2, things were going so well that I gave Sam the choice as to whether he’d like to do the school run in a diaper or in underwear, and he chose underwear!!  In this case, I asked Sam to sit on the potty ‘just to try’ before helping him put his undies on and we brought the potty along with us in the car too.  I let him know that we could stop any time he needed to go and I made sure to keep our trips as brief as possible (30 minutes max). By day 4, I felt like he was ready, so we began doing longer outings like music class and grocery shopping (again going before leaving and taking the potty along with us in the car). And on day 7, Sam went from being naked from the waist down to wearing underwear at home…  I wanted to give him a good long run with being naked a) because it makes getting onto the potty and using it successfully so much easier (one less step!) and b) because I feel like wearing underwear must sort of feel like wearing a diaper, which of course has the potential to lead to accidents.  Overall, I think the most important thing through the first week was keeping the process really positive and taking small steps forward when I felt like he was ready. 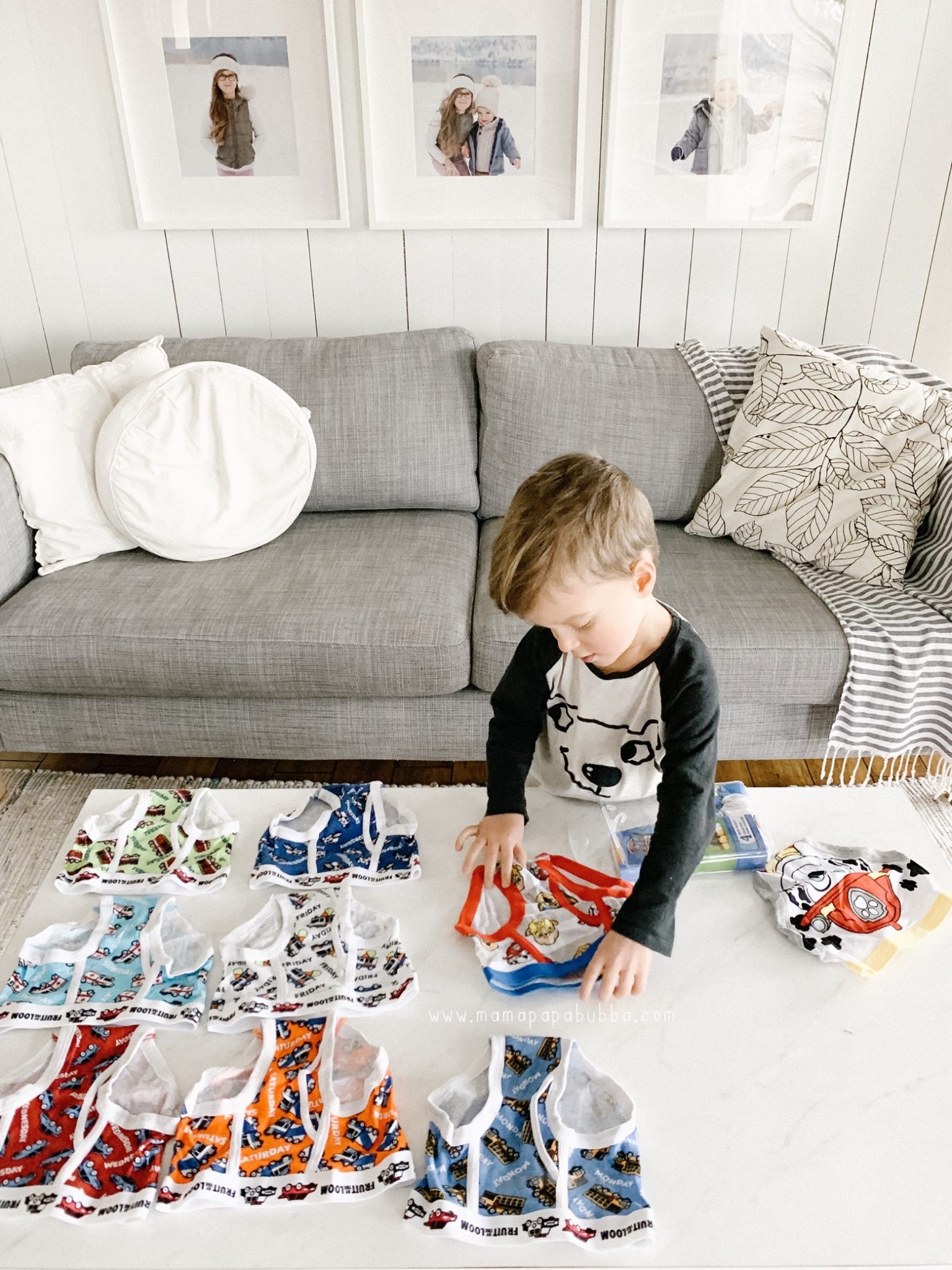 Now…  Here’s what we didn’t do (but obviously no judgement to anyone who has done these things or feels like they’re the way to go – I know they’re often common practice):

– We didn’t get rid of diapers during sleep… At nap times and bedtimes, Sam tries going on the potty and then we put on a “sleep diaper” before he goes down.  They’re the same diapers we’ve always used but they’re now specifically called ‘SLEEP diapers’ and they come off as soon as he’s done sleeping.  I chose to only tackle awake times a) because our kids tend to sleep hard and for long periods of time and b) because we worked so dang hard to help him learn how to be a good sleeper and his sleep is still very easily thrown off, so I’m just not willing to mess with it at this point.

– We didn’t do tangible rewards of any kind… No Smarties for each potty use, no sticker chart, no toy once fully trained. Truthfully, rewards in general just aren’t my jam.  One of my biggest passions as an educator has always been fostering intrinsic motivation, so extrinsic motivators (like candy and stickers) just don’t vibe with that personal passion. If you’re interested, Alfie Kohn’s Punished by Rewards: The Trouble with Gold Stars, Incentive Plans, A’s, Praise, and Other Bribes is a fantastic read.

– We didn’t aim to fill Sam with extra liquids in order to increase his ‘opportunities to learn’. I know this is SO common and many people go as far as to give their kiddos ’treat drinks’ (like juice and chocolate milk) in order to increase their consumption, but something about that just doesn’t really sit right with me… I feel like if I was learning something new and feeling slightly anxious / overwhelmed / whatever about it, the last thing I’d want is someone to artificially pile on and give me more to manage. Of course, that’s just my personal feeling.

– Lastly, we didn’t use timers. I know many people set their timers and sit their kiddos on the potty every 15 minutes for the first day, maybe every 20 minutes on the second, etc., but I knew Sam was ready and really wanted the process to be more child-led – more focused on him listening to his body instead of me telling him when to go. Instead, every now and then (and not a ton), I reminded him that the potty was out and ready when he needed it.

And that’s that.  While I anticipated that it would go fairly well, it’s been so much easier than I even anticipated and for that I’m thankful.

Gracen’s been talking about having her ears pierced for ages now, but being the sometimes cautious, emotionally sensitive kiddo that she is, she didn’t actually want to go through the process of getting them done.  She loved the idea of being able to wear pretty earrings, but it wasn’t enough for her to take the plunge.  So we left it at that.  She knew that we were happy to take her, but only when she was ready.

After having put off several purchases, returns, and errands for weeks {as you do on summer holidays}, we decided that we’d spend the day at the mall and get everything done in one go.  I forget how it came up exactly, but Miss G mentioned something about getting her ears pierced while there and we decided that we’d simply go and check it out so that she’d be prepared when the time came.  Well, as we walked towards Claire’s hand-in-hand, she turned towards me with a confident grin and said, ‘I think I’m going to do it today!’ {Side note: While I would have preferred to take her to a proper piercing parlour to have them done, she wasn’t at all on board with the whole needle thing, so Claire’s it was.}   As we headed to the back of the store to check things out, an older boy {probably 8 or 9} was having one of his ears pierced, so we browsed / nonchalantly observed from afar.  It’s probably one of the best things that could have happened because although he did say that it hurt, there was no big reaction, no jump, no tears.  Which is probably exactly what Miss G needed to see.  Confident in her decision to have them done then and there, Miss G picked out her earrings and got up in the chair.  The manager who was doing them for us was absolutely lovely and put Grae’s nerves at ease by being reassuring, but not so over the top that it seemed insincere.  Grae was definitely nervous, but as they got everything prepared, we had a few big hugs and talked about what she could do just before getting them pierced {gently close her eyes, think happy thoughts, take long, slow breaths, etc.}  When the time came, she sat there perfectly still and even asked me to take a video of it happening.  And because I’d requested that both sides be done at once, it was over in a snap!

After the piercings were done, she did sort of frown and say that it hurt, but that was it.  No tears!  I cleaned them for her while the Claire’s manager held Sam for me and we were on our way, freshly pierced. ☺ 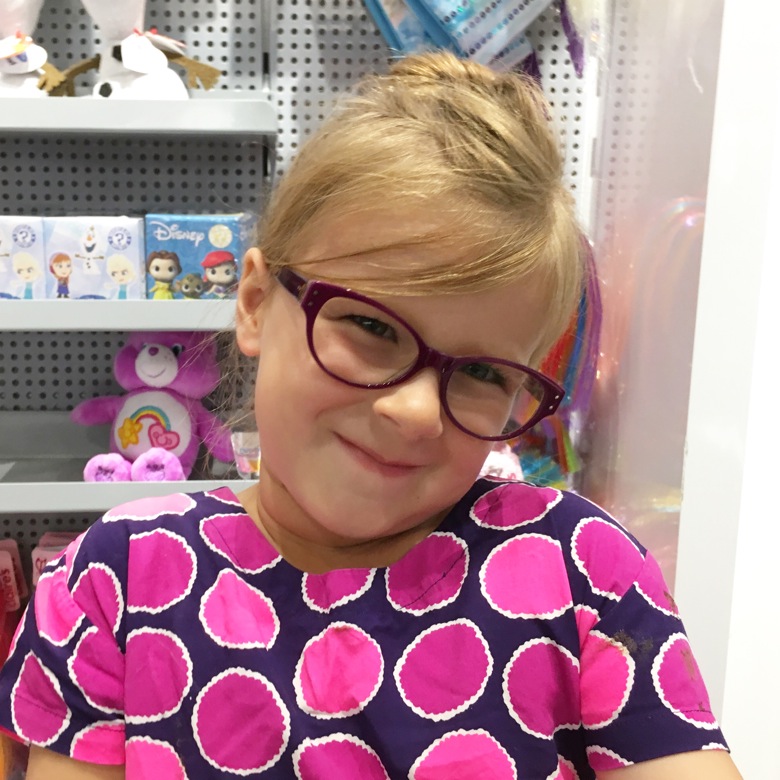