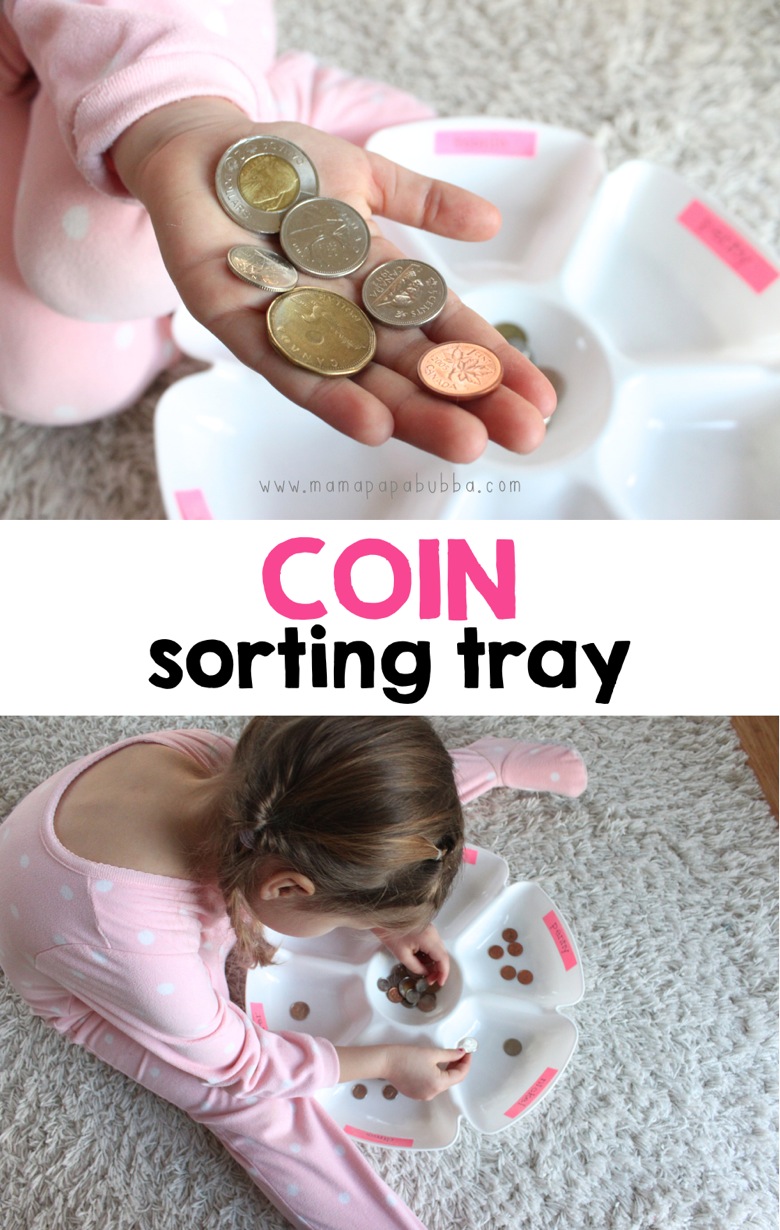 After our rhyming pairs matching game, Miss G asked to play another homemade game this afternoon.  With dinnertime nearing and a baby boy who needed one of his mama’s arms, it needed to be something super quick and easy to pull together, and that’s how this very simple coin sorting tray came about.  Admittedly, it’s more of an activity than a game, but Miss G didn’t mind in the least.  It meant that she got to play with money, which she’s been super interested in lately. That being said, since she’s spent the majority of her life living in the Middle East, Canadian currency is not something she knows much about just yet, so this was perfect for her.

END_OF_DOCUMENT_TOKEN_TO_BE_REPLACED

For the last 19 months that we’ve lived in our little old house, we’ve collected mail for the previous tenants and messaged them each time there’s been enough to warrant them making the trip into the city to pick it up.  Because there were 6 adults {plus a baby} living where the 3 of us do now, the mail stacks up quite quickly.  I honestly don’t mind one bit, but every month they apologize profusely for inconveniencing us.  A couple of weeks ago, when the father/grandfather of the family popped by for a pick up, he handed me a pretty red envelope and said, “For the kid”.  I smiled, thanked him, and set it aside for when Gracen woke up from her nap.

Later in the afternoon, she opened it up to find two crisp 5 dollar bills.  I explained that it was money (poor girl can operate a debit machine like nobody’s business, but has barely seen dollar bills in her lifetime) and asked her what she’d like to do with it.  We brainstormed ideas and came up with these options:  put it in her piggybank, keep it in her purse, deposit it in her bank account, give it to someone, or use it to buy something.  In the end, she decided that she wanted to buy something with her money (“a bath bomb would be nice”, she told me) and Superstore was the place to go.  So off we went. 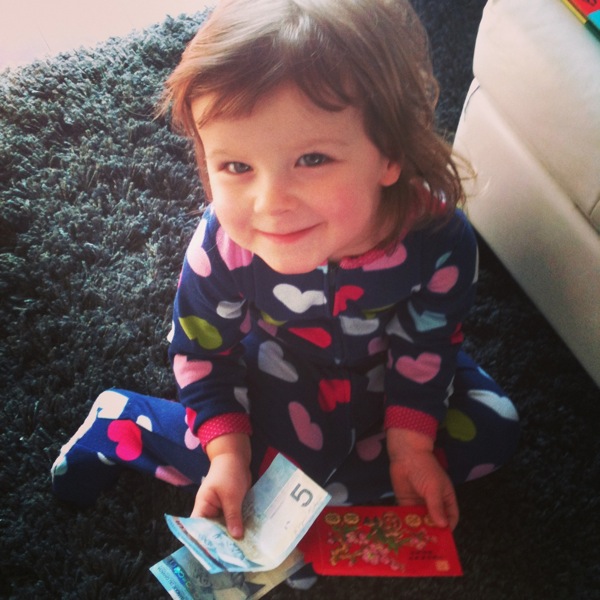 When we arrived, I explained that she had $10, so whatever she wanted to purchase would have to be less than that.  She carefully browsed the aisles, inspecting items while asking “Is dis one 10?”

When she announced that she was ready to make her decision, she had 6 options to choose from… A Hello Kitty Easter book, a small collection of bath toys, 3 bottles of glittery paint, a group of squishy dinosaur toys, a bracelet making kit, and a ride-on bouncing ball.  We lined the choices up down the middle of an aisle and she slowly started ruling things out.  “Not dis one…”, then she’d go and put it away.  When she’d cut the selection down to just 3 items, she confidently shouted “I pick the bouncy ball!!!”  With that, we tidied up the rest of the stuff, and headed to the self-serve checkout where she scanned her item, deposited her money in the slot, and collected her receipt.

With my little lady having completed her first ever shopping purchase, we headed home to blow up her new bouncer and play in the backyard.  She’s bounced around the yard every time we’ve been outside since, so I’d say she’s pretty pleased with her decision. ☺ 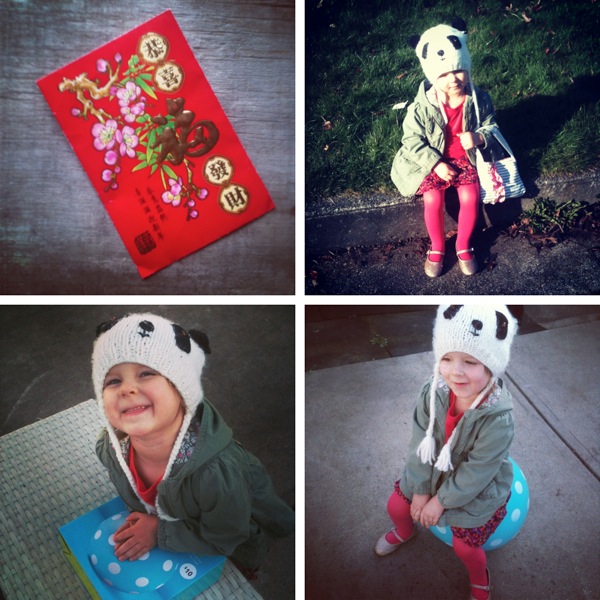 happy with her choice // bouncing bubba

Stay on top of the fun by liking us on Facebook here and following us on Instagram here. 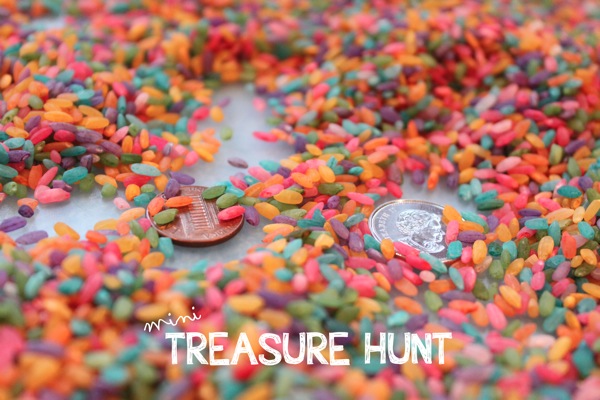 Recently, Gracen has become borderline obsessed with all things searching-based.  She loves a good game of hide-and-seek, she adores playing ‘I Spy’, and there’s nothing better than a ‘Where’s Waldo?’ book.  So this afternoon, after a busy morning filled with a morning walk, a first attempt at skating, and an impromptu hair cut, we decided to pull together a low-key searching activity indoors. 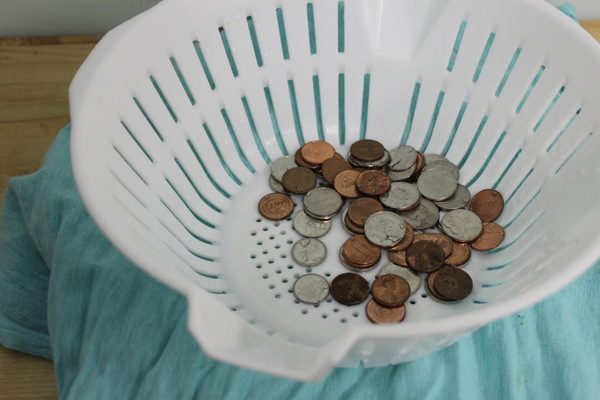 First, we rounded up some coins (aka treasure) and gave them a good scrub in hot soapy water {because money grosses me out}. (Of course you could always use something different as treasure…plastic gems, tiny toys, play money, etc.) 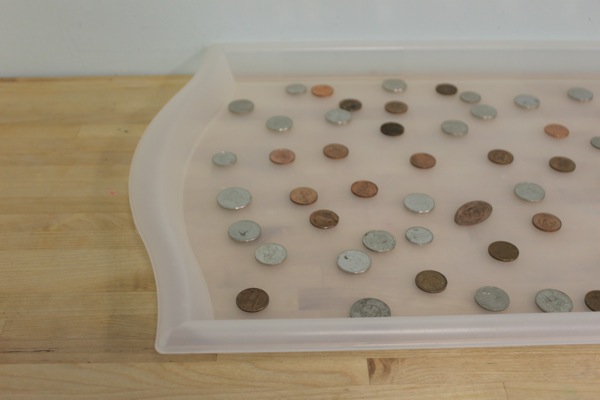 After drying off the coins, we spread them out on a plastic serving tray… 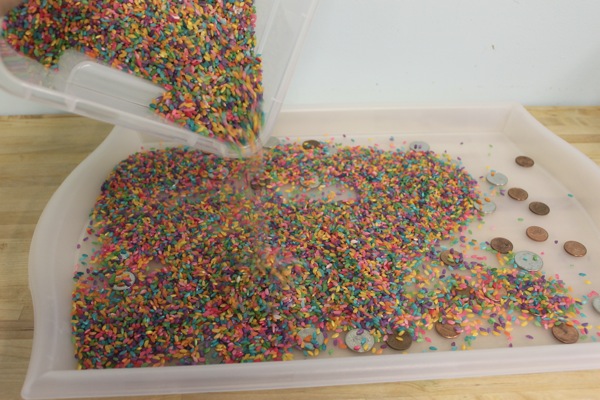 And hid the treasure with the coloured rice we made months ago (plain rice, sand, flour, dry pasta, beans, and cornmeal would all be good alternatives). 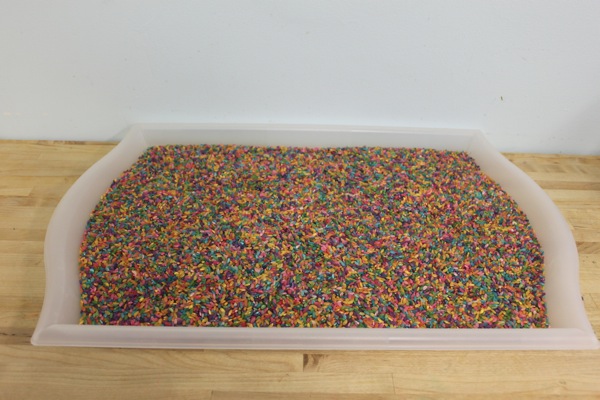 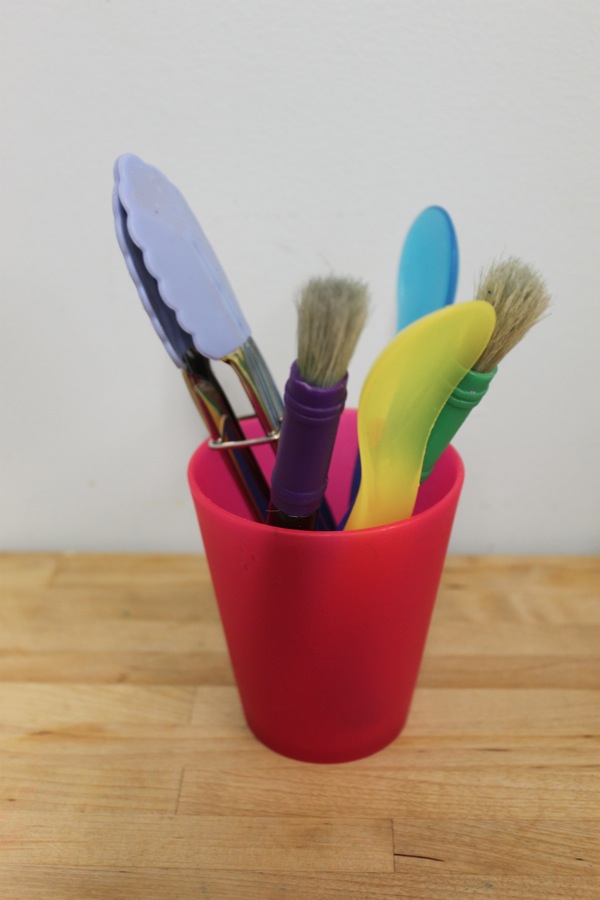 Next, we gathered a few treasure finding tools. 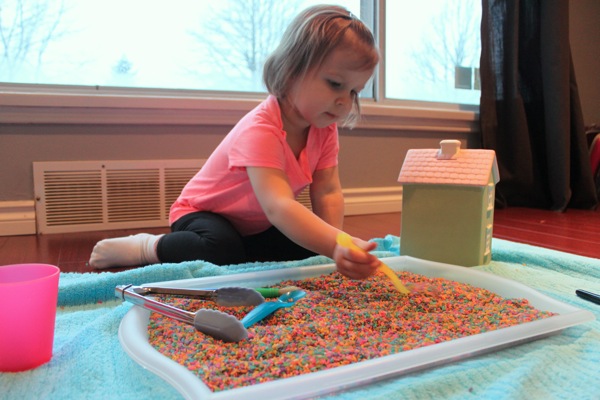 We laid our tray down on a towel for easier clean up, retrieved one of Miss G’s piggy banks for treasure collection, and the search began. 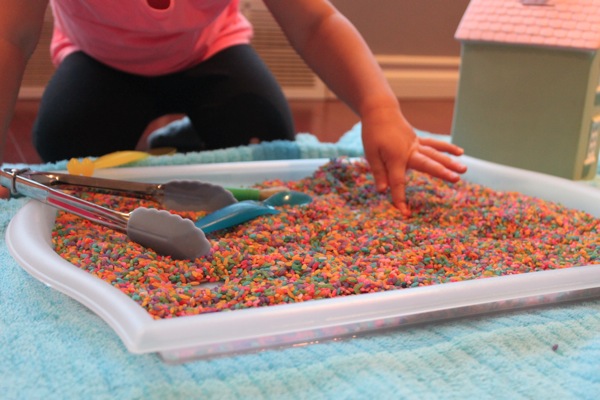 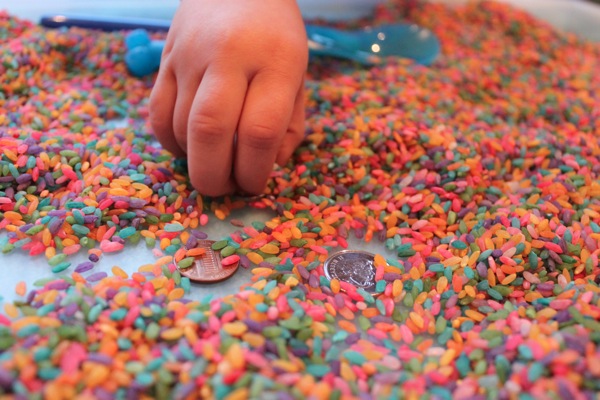 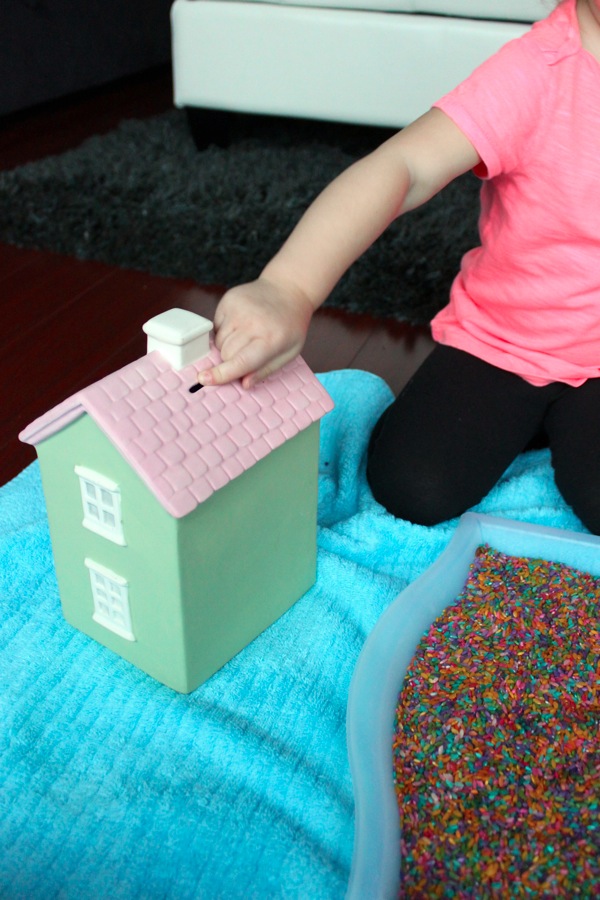 Grae had so much fun with this little game that I’m certain it will sit out in our living room for the next few days being enjoyed by our little search-obsessed girl time and time again.