With our gardening nearly complete and the forecast calling for rain, we decided to spend our last day with Gma Char down in the States.  It looked a little something like this… 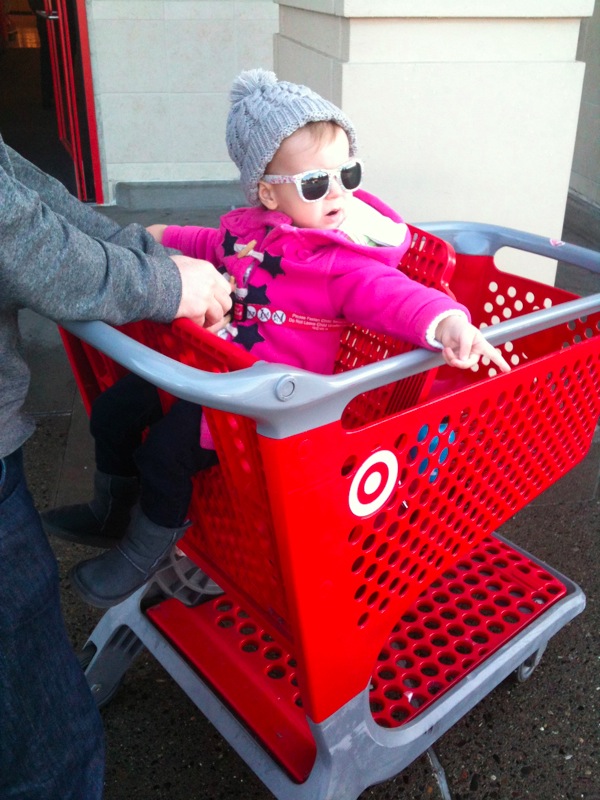 Strapped in and ready to go. 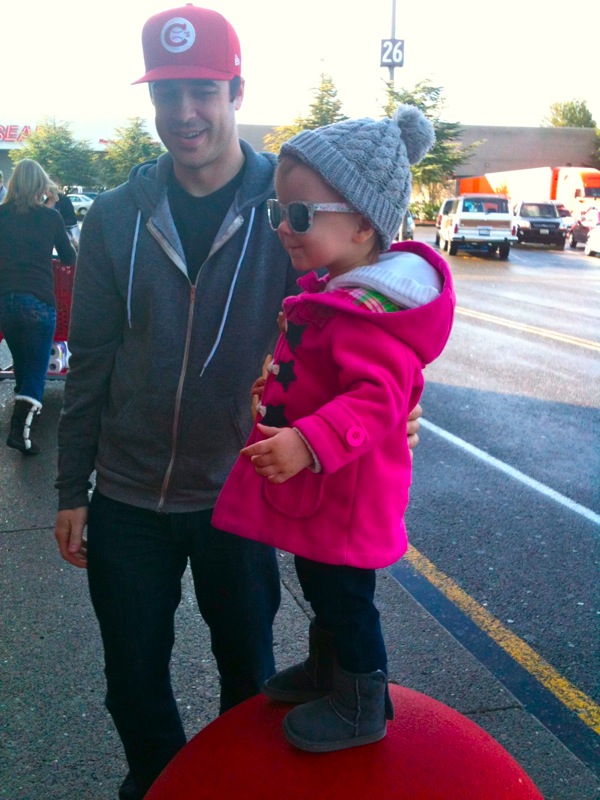 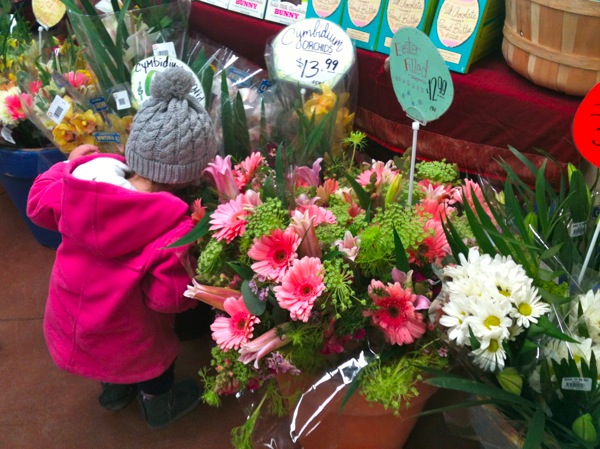 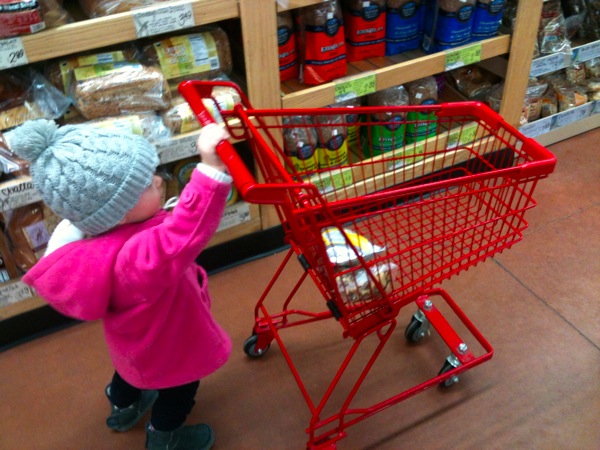 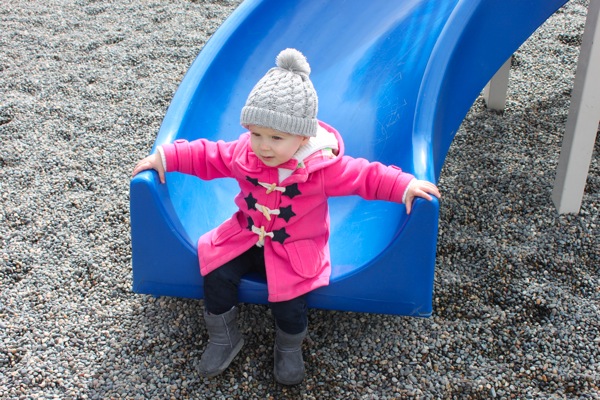 Play and picnic break at the Tot Lot. 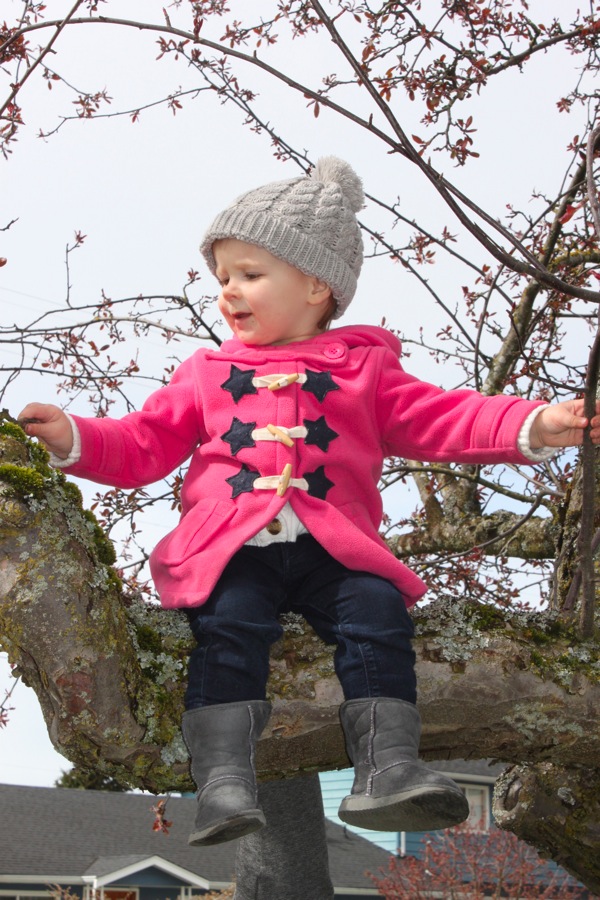 Chillin’ in a tree.

Today was Brad’s virtual Saturday, so we headed down to Bellingham for our monthly stock up and some fun. First, we hit up our two favourites, Trader Joe’s and Target for the essentials.  Gracen was a champ about spending a couple of hours roaming up and down store isles and enjoyed riding around inside the shopping carts.  Afterwards, she and Papa headed to the mall’s play area while I got in a full 45 minutes of clothes shopping by myself (a post-Grae first)!  It was already past nap time, so we snuck in a quick lunch at the Chipotle knock-off, The Habenero Factory, and hit the road to do a few errands while G snoozed in her seat. 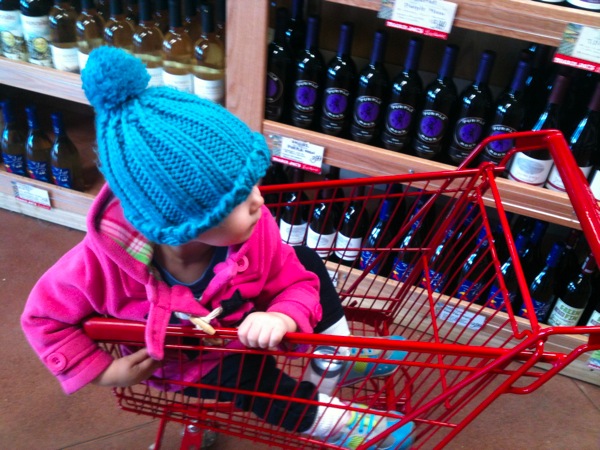 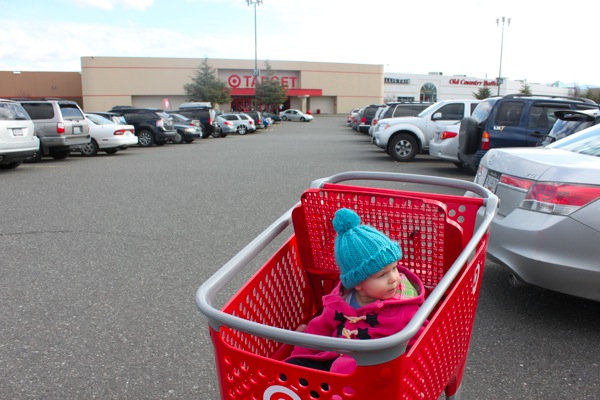 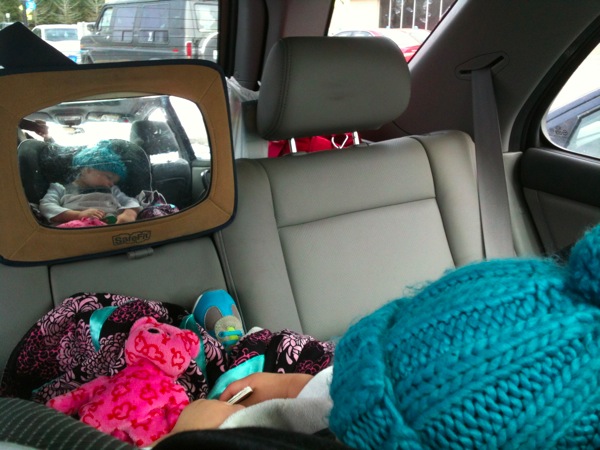 Gracen awoke from her nap to find that we were parked out front of this shop (hmmm…wonder whose stop this was…) and naturally, we had to get out of the car to investigate the big green guy.  She wasn’t so sure of him at first, but she quickly warmed up to him and ended up giving him 5s, kissing his knees, and rubbing his rock hard abs.  After all that, I’d say Miss G and The Hulk are good friends, wouldn’t you? 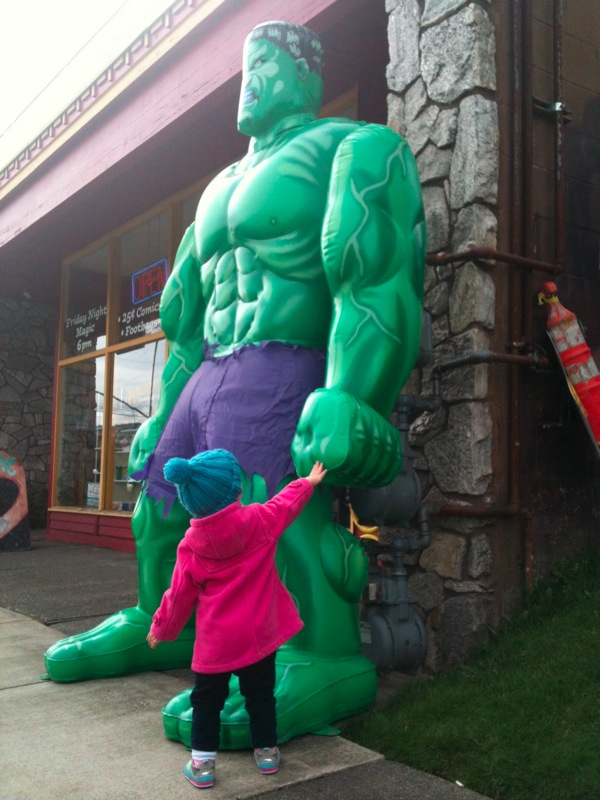 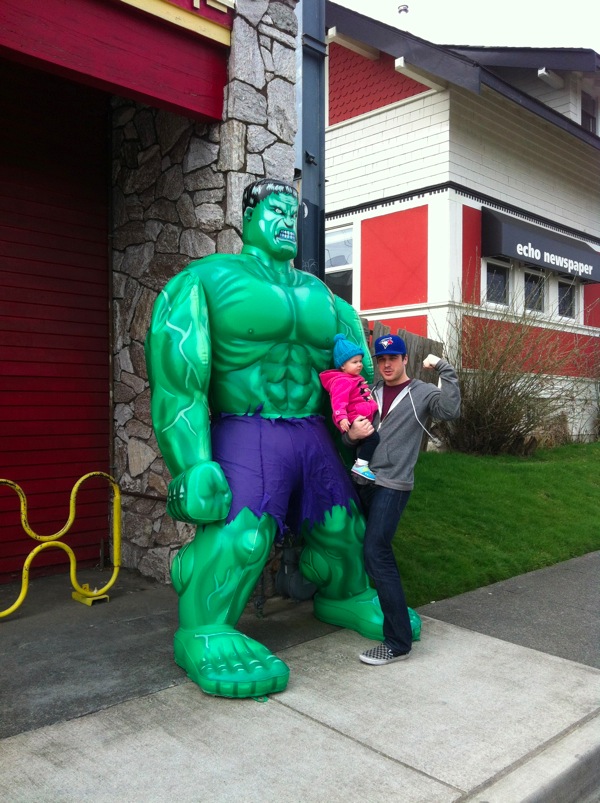 Tired and done with shopping, we headed back towards home when we decided to make an impromptu stop in White Rock.  It was absolutely freezing by the ocean, but we layered up and headed towards the beach.  Lucky for us, a train was making its way down the tracks as we got to the boardwalk.  Grae watched closely as it nosily clunked on by, until it stopped.  I mean, completely stopped, creating a barrier between us and the beach.  We waited and watched until it finally started with a jolt, and continued along its path. 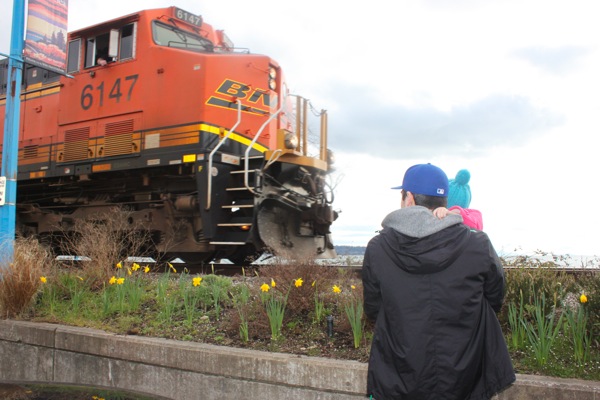 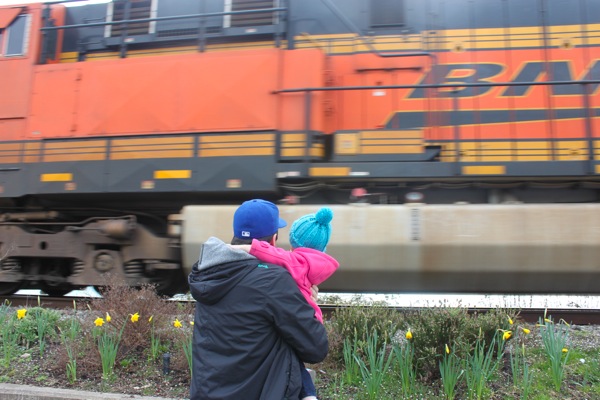 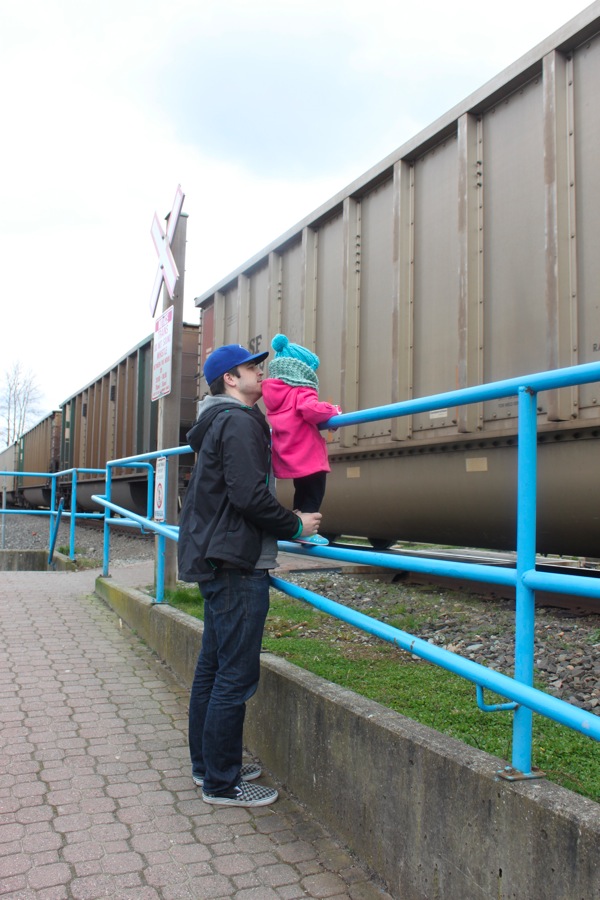 Gracen loved ‘Grizlee’, the bear statue and kissed his fur (she’s all about kissing things she likes right now) and rode on his back.  We played on the grass, collected rocks, threw them in the ocean, and walked along the boardwalk until we were frozen solid and could no longer stand being out in the wind. 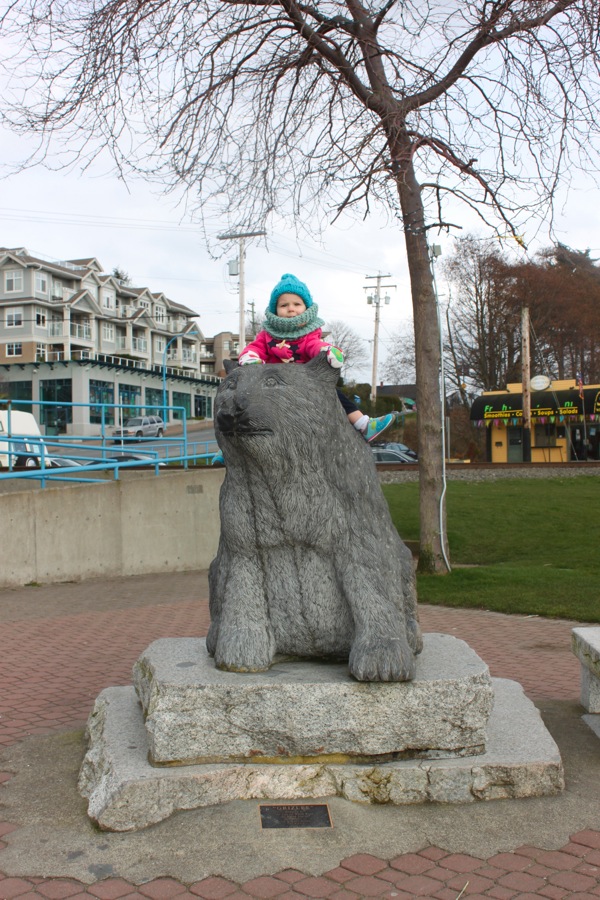 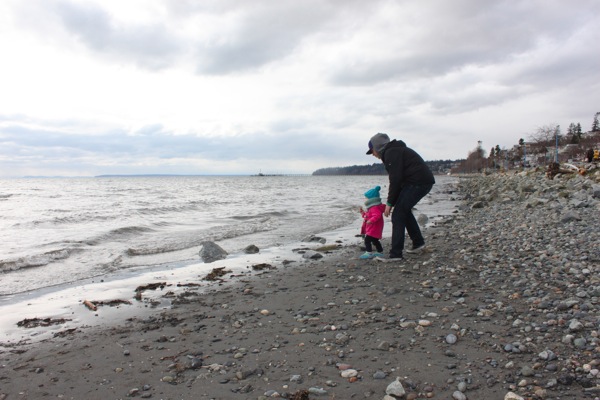 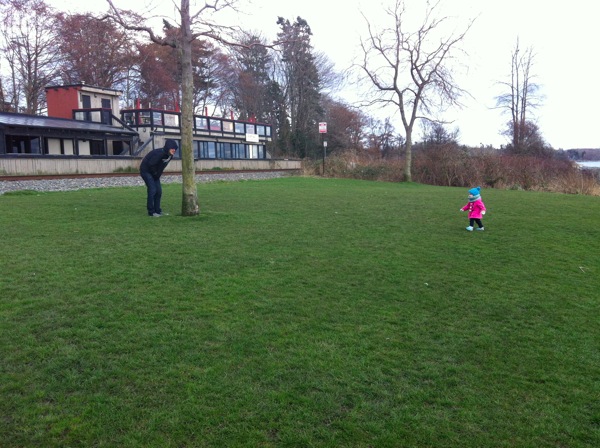 Once we got home, our little helper helped empty all of the grocery bags, we ate dinner, and it was bath time and bedtime for G after a long day. 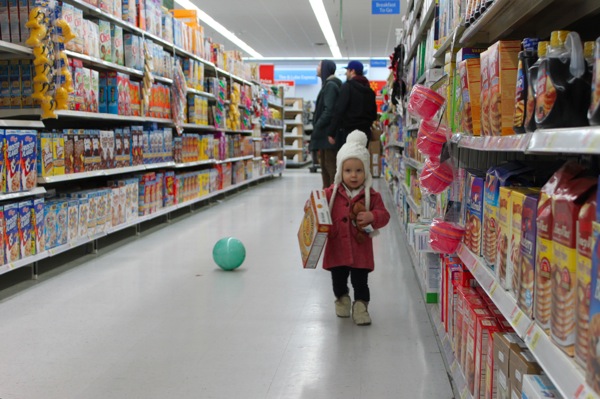 This morning we headed down to the States to stock up on groceries.  Luckily we had this little shopper along to help fill the cart.  :) 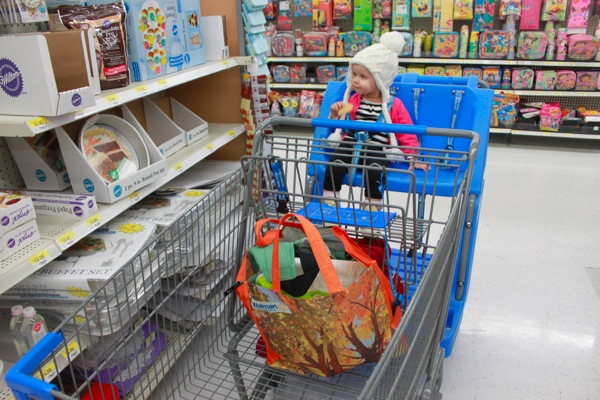 We’ve recently starting doing big grocery shopping trips in Bellingham…  There’s a ton of selection, the prices are insane, and Trader Joe’s is right up our alley.  Today we headed down, lists in hand, to stock up for the Christmas holidays.  Woo-weeee!  It was a big one!  Luckily we had this Cadillac of a cart.  Grae was riding in style.