This week, Miss G and I are participating in a candy play series with several other mamas and munchkins from around the world…  Yesterday’s theme was painting – check out our glossy Skittles paint here. 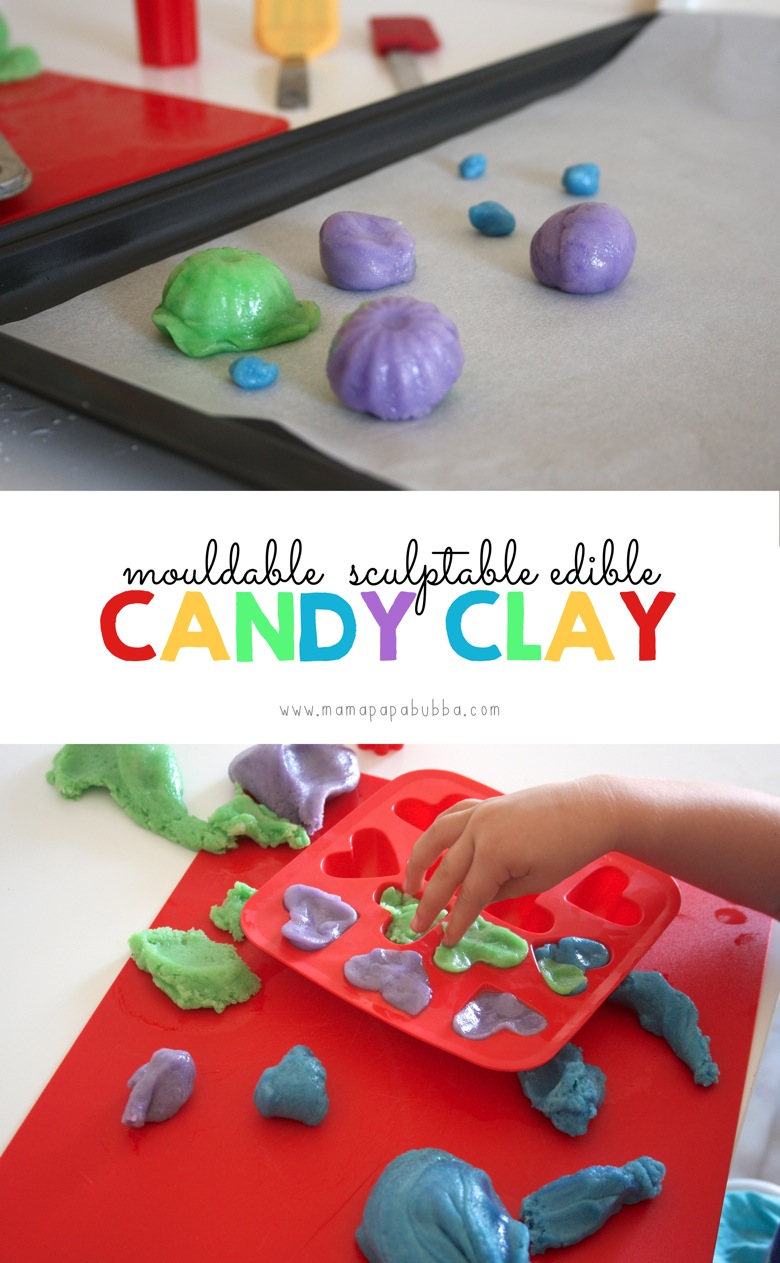 It’s no secret that we absolutely love homemade play dough around here…  In fact, we usually have 2 or 3 batches on the go at once, and most often, we pull at least a batch out a day.  It’s hard to choose a favourite, but out of all our go-to recipes, I think the marshmallow dough we made this summer was one of the most enjoyed.  So when I stumbled upon this recipe for homemade candy corn, it got me thinking…  Would the dough be similar?  How much of a ‘play window’ would it allow for before it started hardening?  Would it easily mould?  Well, there’s only one way to find out, now isn’t there? 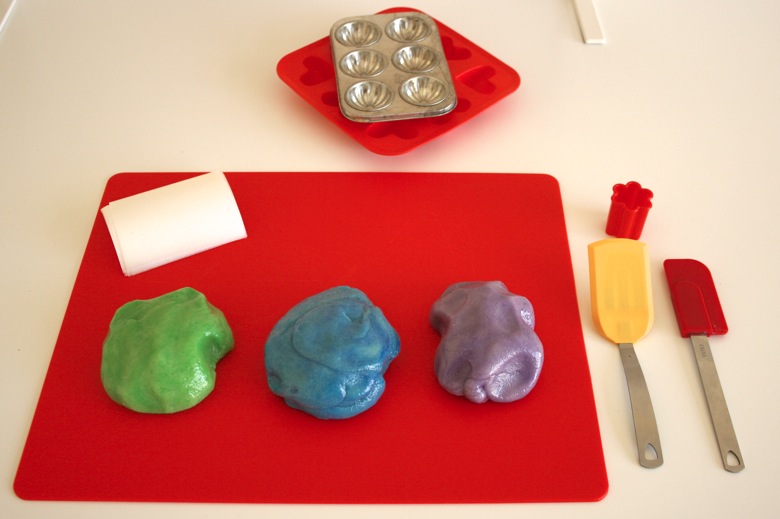 Since Gracen actually napped today (it doesn’t happen all that regularly anymore), I prepped the dough while she rested.  She’d already selected the colours she wanted earlier in the day and told me that she wanted to use the candy dough to set up a candy shop, so I kept that in mind while setting up the invitation to play.  I kept it simple and included a small baking tin, an ice cube tray, a mini flipper and spatula, a small cookie cutter, and some parchment paper squares along with the dough.

The dough itself is very interesting, and while it is similar to our marshmallow dough in some ways, it’s also very different.  It’s hard to describe, but it’s super super dense and heavy with an almost glassy finish.  And while it’s quite difficult to pinch or break  into chunks, it twists off really easily.  It actually reminds me more of a plasticine than a dough, so that’s why we renamed it candy clay.   I thought it was pretty cool, but I was interested in seeing what Gracen thought about it… 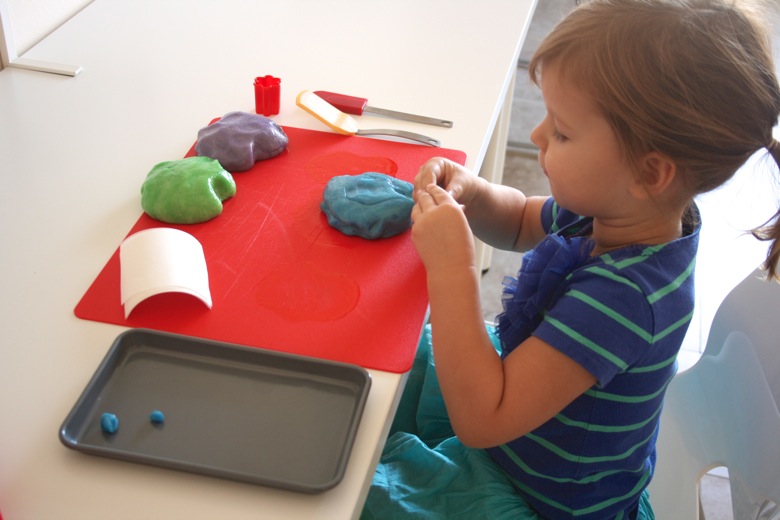 When she woke up, she saw the candy clay and immediately had no interest in a cup of milk, a snack, or our usual post-nap routine.  All she was interested in was digging her little fingers into the dough.  Somewhat surprisingly, she began pinching off little bits and made it look fairly easy.  She rolled them just a tiny bit and declared that they were rock candies. 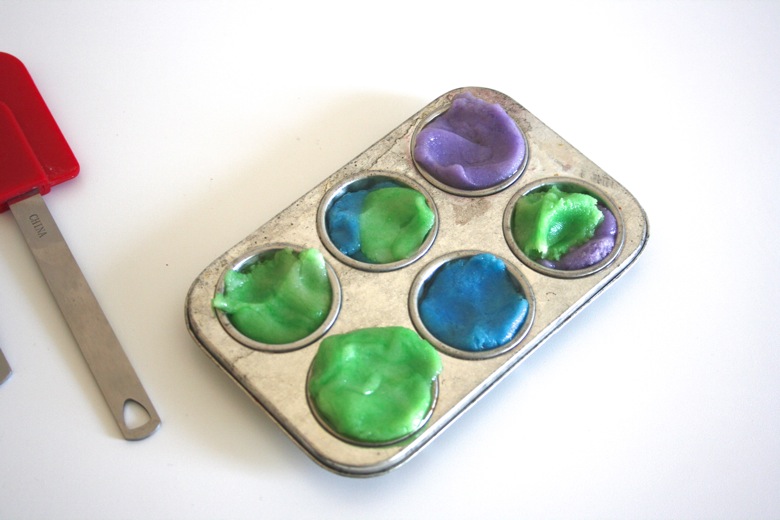 Next up, she pulled out her miniature tin mould.  At this point, she did find that getting chunks of clay that were big enough to fill the cups was pretty difficult, so I suggested trying to twist the chunks off instead. 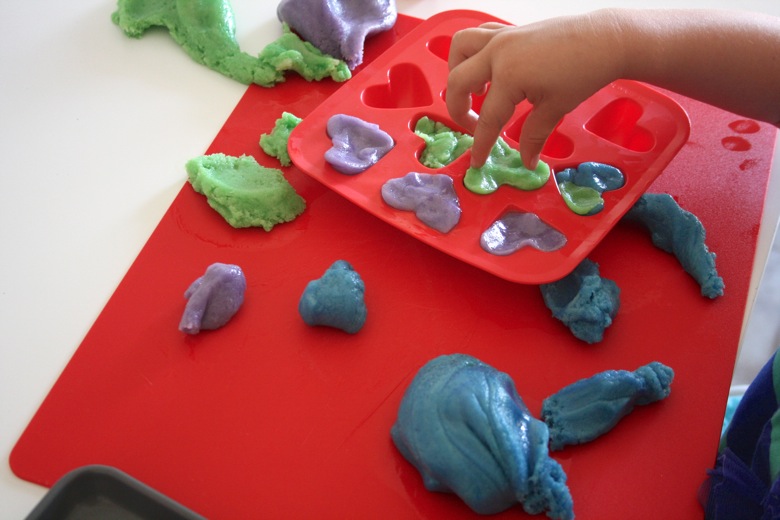 It immediately made the process so much easier and she was able to fill her moulds to the top and squish the clay down completely independently. 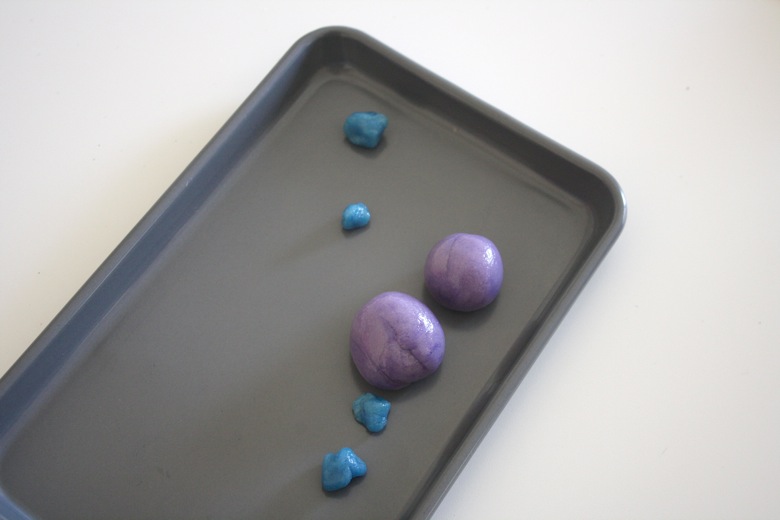 While she experimented, I tried using the clay to form balls.  Because it’s so dense and sticky, rolling balls was a breeze.  There was no crumbling, no falling apart, and they held their shape beautifully. 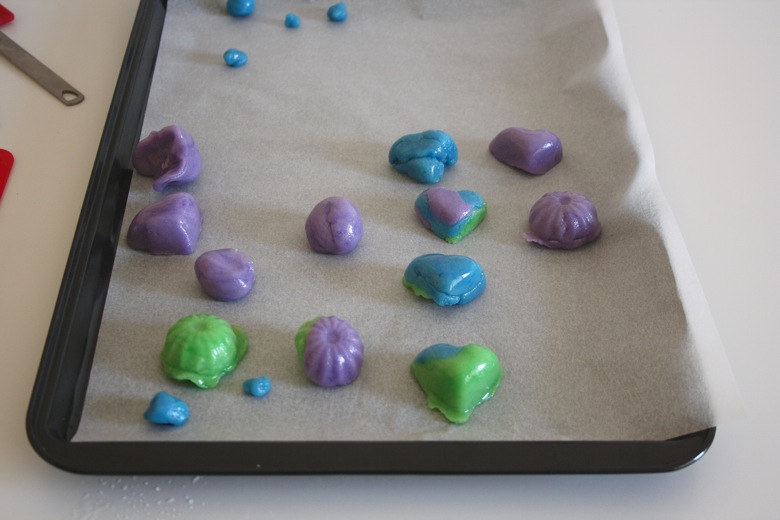 By this time, Grae had discovered that the clay really doesn’t need much time at all to set.  In fact, you can pretty much put it into a mould and yank it out immediately – no need to give it time to harden. 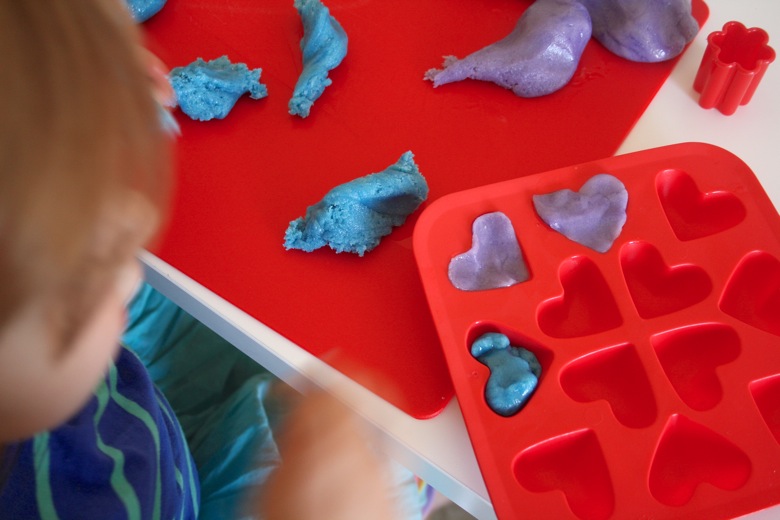 The thing I liked about this candy clay is although it’s not nearly as soft and squishy and luxurious felling as a really good play dough, it challenged Grae with its different texture and provided a ton of opportunity to develop those little hand muscles. 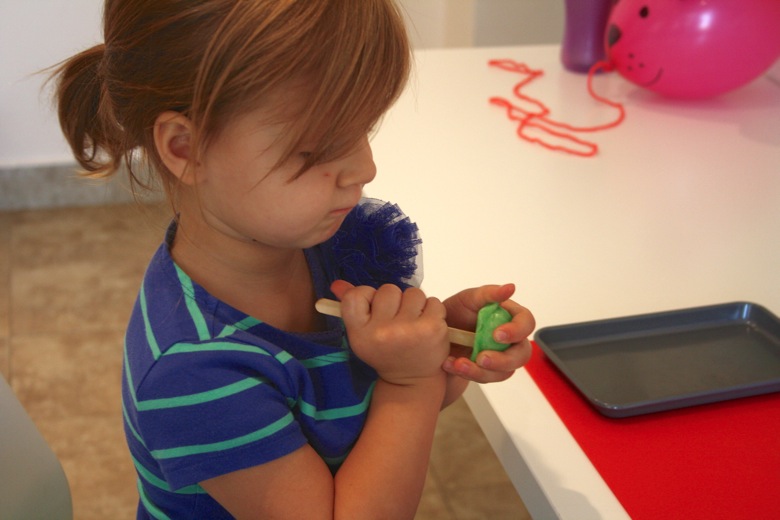 With a large baking pan full of finished candies, Gracen turned to me and said, ‘Mama, I have an idea!!!  Can I please have some popsicle sticks??’ 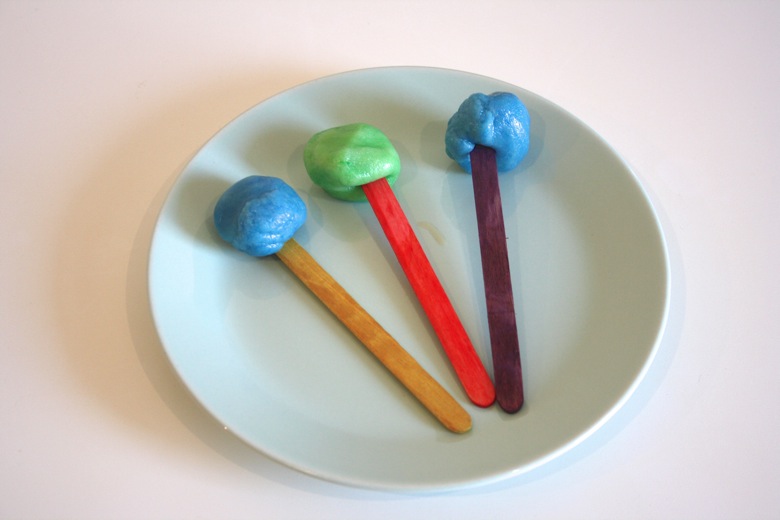 I love when she adds her own elements into sensory play activities, so we retrieved some and she immediately began making lollipops. 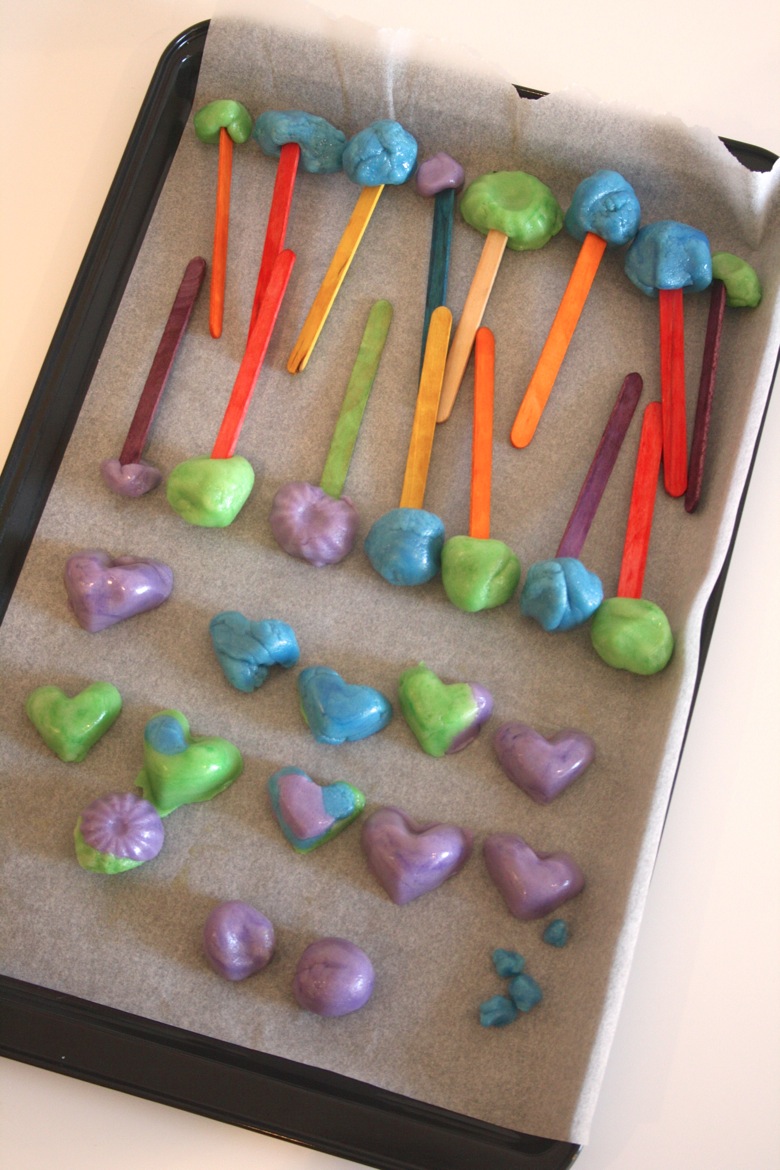 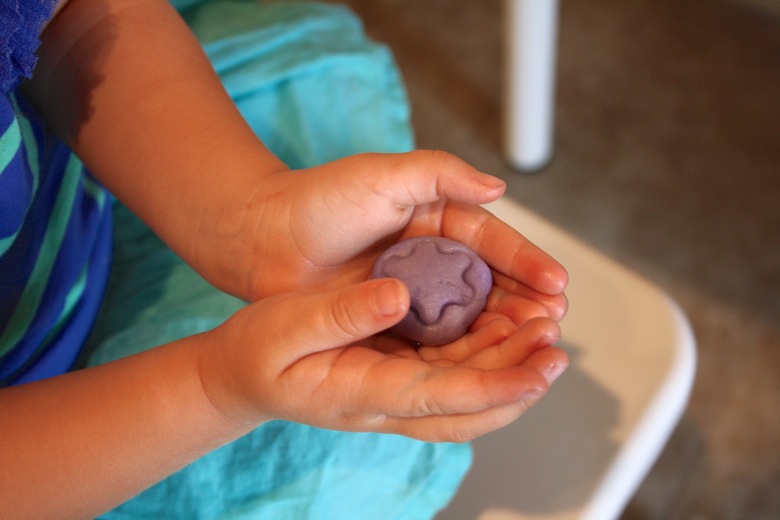 By this point {about a half hour into our play}, we could really start to feel the candy clay hardening up.  It was still mouldable, but it definitely took more effort and strength.  At first, I think Gracen was feeling a little bit frustrated, but I left her to work through it as I tidied up a few things, and she called me over to show me this.  Even though she could no longer easily create new candy shapes, she could enhance the ones she’d already made by pressing her cookie cutter into them.  {Smart little thing – I’m always amazed by what she can come up with when I give her the space to solve her own problems.} 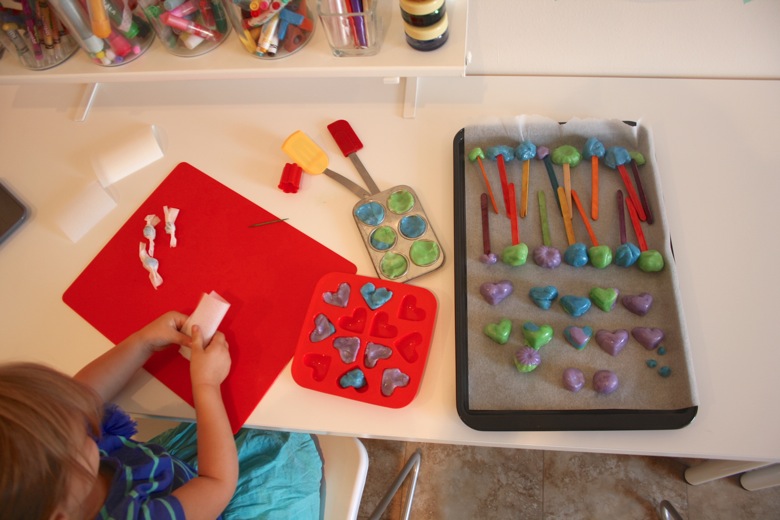 It wasn’t until we were almost ready to pack things up that she discovered the parchment papers, which opened up a whole new opportunity to play and create.  With a little bit of modelling, she was soon wrapping her own candies and explaining that she was going to sell them in her candy shop. 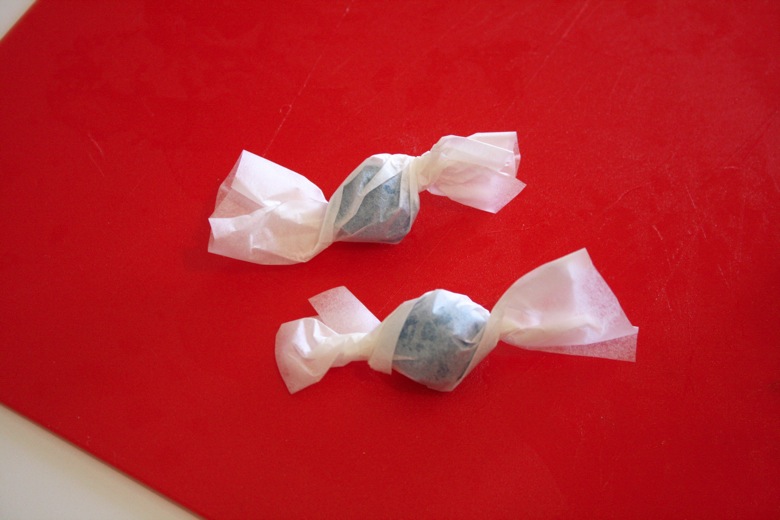 Now technically, these little candy clay creations are real candies that can be eaten just like any other candy would be, but because Miss G doesn’t do sugar yet, the play involved was more than enough to make the cost of the ingredients and the effort that went into making the clay worth it.  BUT, if you wanted to eat them or share them with friends, you could!

Now for the recipe…

Heat butter, corn syrup, and white sugar in a pot over medium heat until the sugar is fully dissolved. Bring to a slow boil and allow to boil for 8 minutes while stirring constantly.  Remove from heat, stir in vanilla, and let sit for 10 – 15 minutes.

While the wet mixture is cooling, whisk the powdered sugar and powdered milk well in a separate  large bowl.  When the wet mixture is still warm but not scalding, pour it into the dry mixture and stir.  When stirring is no longer effective, dump the contents of the bowl out onto a clean counter and knead it well (take care to make sure it’s not still hot of course).

When the clay is uniform, divide into sections, add food colouring, and knead again.

Alright, now for some more fabulous candy-themed sensory play ideas…  Click on the links to see creative ideas from some of my favourite kid bloggers from around the web.