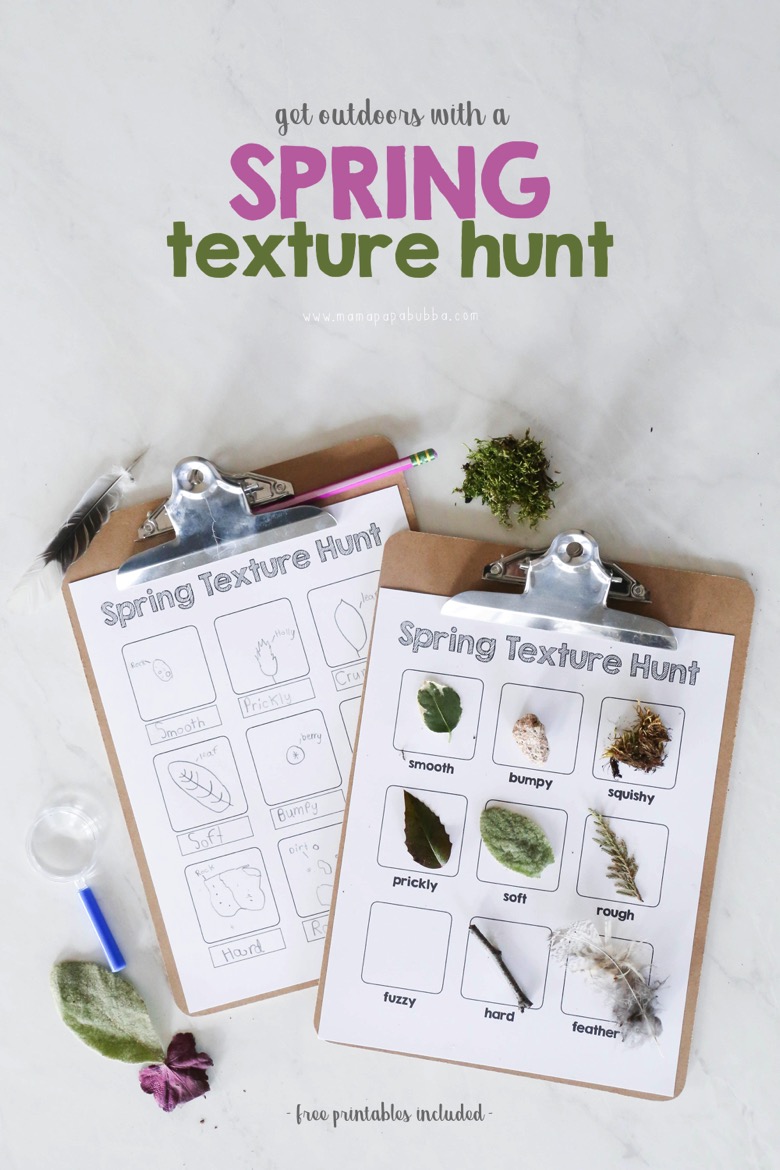 Whew…  After a long, snowy winter here in the Okanagan, I *think* spring might actually be here and I can’t tell you how good it feels!  We arrived home on Good Friday after a week in Vancouver to find nearly all of our snow gone and despite the fact that it briefly snowed on both Easter Sunday and Monday, I feel like we’ve officially turned a corner.  Sunshine, warmer temperatures, and little bits of green beginning to appear after months of snow and grey skies?  Yes please! 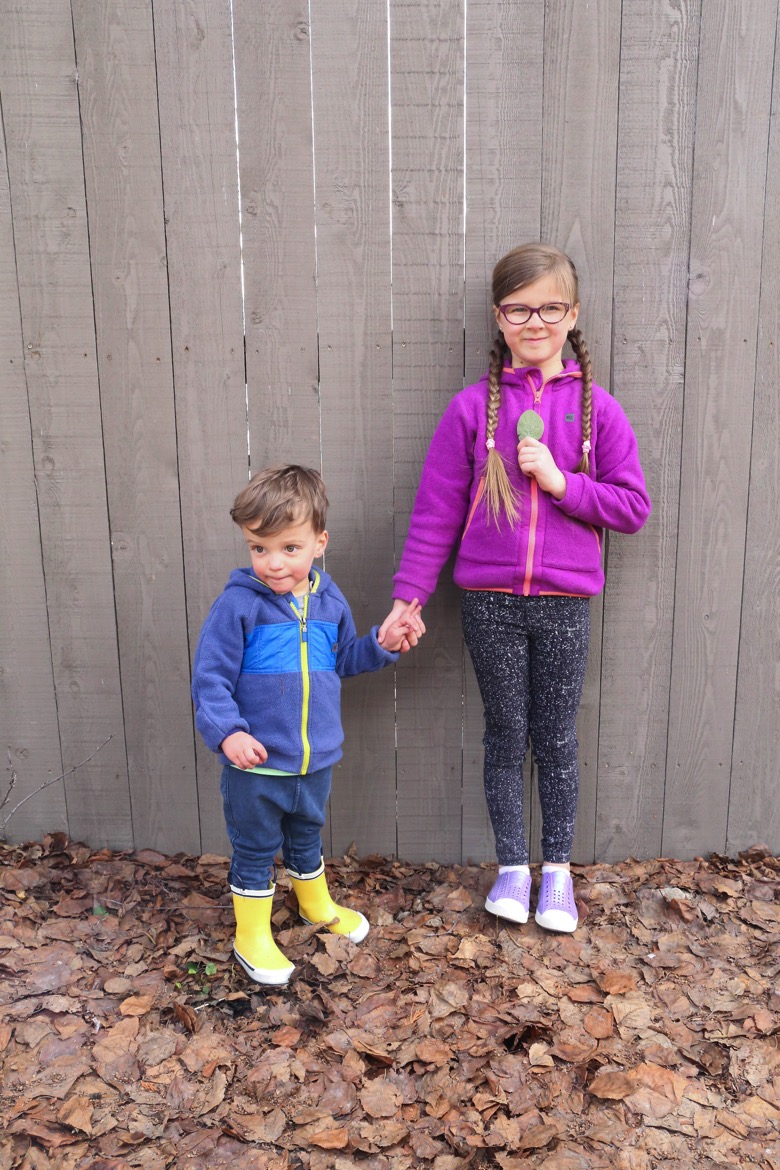 In celebration, we spent a good part of our weekend outside…  We brought the kids’ bikes out, set up our trampoline, did some yard work, and best of all – we did our very first nature activity of the season – a spring texture hunt!  I can’t tell you how sweet my two little nature explorers were out in the yard searching for different textures with their clipboards in hand. 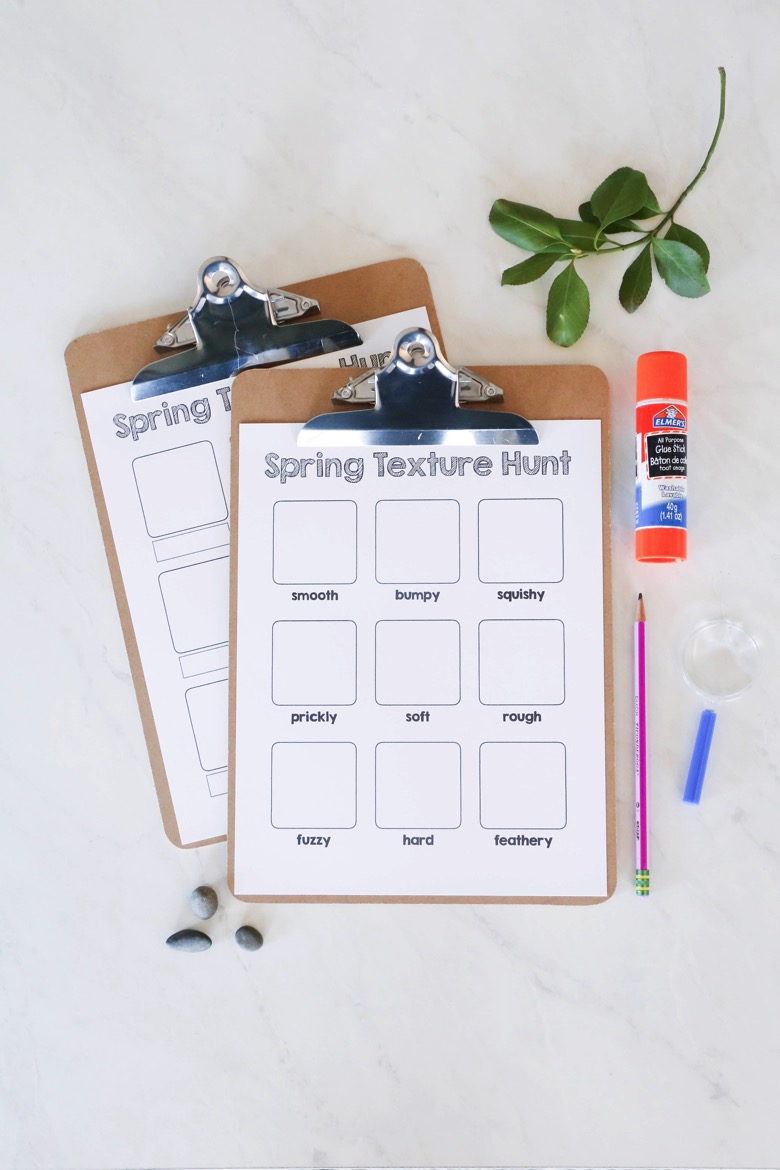 Now at 2 years old Sam absolutely didn’t need a clipboard or printable to collect / record his findings, but because he wants nothing more than to be exactly like his big sister at the moment, I decided to make him a modified spring texture hunt printable too and thank goodness I did!  The moment he saw Miss G with her pencil and page clipped on her board, he shouted his go-to, ‘Too!  Too!  Sam too!’ and was pleased as punch when I passed him a clipboard of his very own.

I’ll share both down below, but for Grae I designed a more open-ended observation sheet that allowed her to sketch out the nature items she found  plus come up with her own words to describe their textures.  For Sam, I simplified and gave him boxes pre-labelled with texture words.  Now for his recording sheet you could very well have your child draw the items, but Sam’s not there yet of course and in an effort to keep it as tactile and simple as possible, I decided that we’d help him glue his nature items right onto his sheet {which actually worked out really well}. 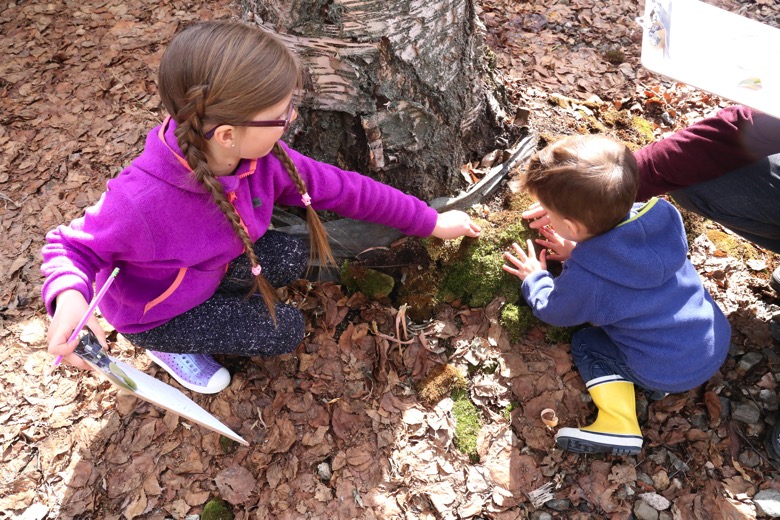 Kids, clipboards, and a glue stick in hand, we headed outdoors to see what we could find as far as interesting textures in nature go. 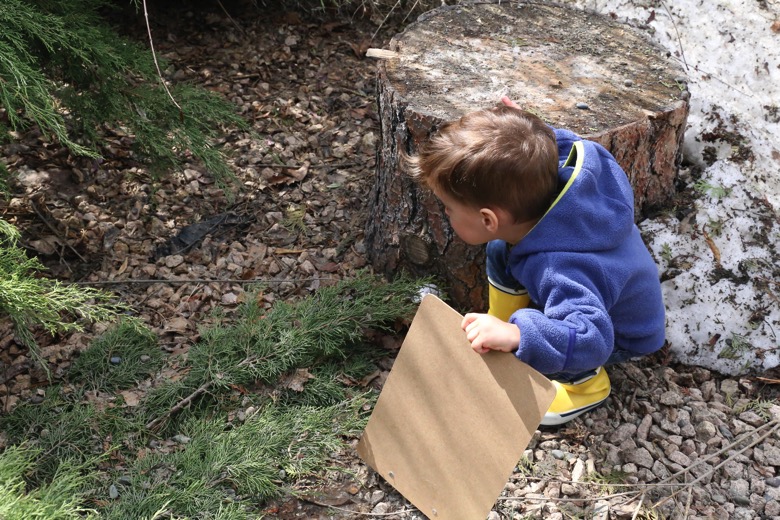 Needless to say, nature is FULL of all kinds of amazing textures and finding a bunch of different ones was a breeze right off the bat.  I followed Sam’s lead and went off into this little corner filled with rocks, shrubs, a tree stump, and our little patch of remaining snow and together we gently touched things and talked about how they felt on our hands.  I will say that while the whole clipboard part of this activity is totally unnecessary for little ones like Sam, the actual touching and describing part is fantastic. He carefully ran his little hands over the items and listened so intently as I used words like ‘bumpy’, ‘rough’, and ‘hard’ to describe them – so awesome for his vocabulary development! 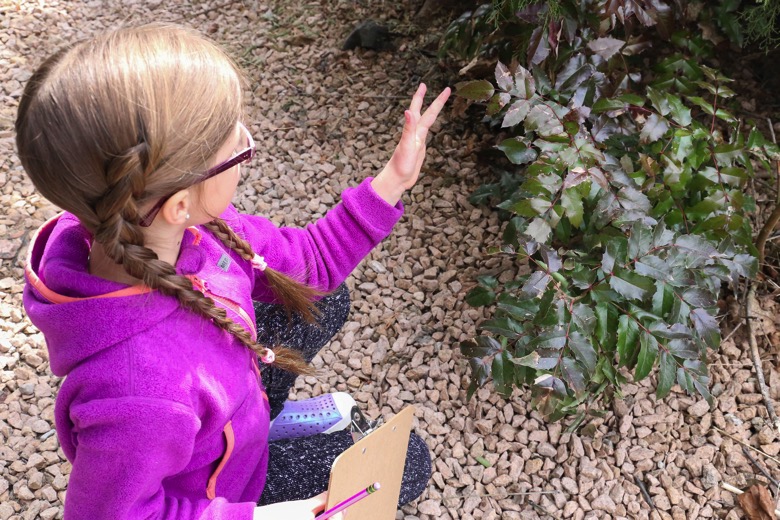 Miss G immediately got to exploring, feeling things along the way, and recording the ones that really stood out as having an interesting texture on her observation sheet. 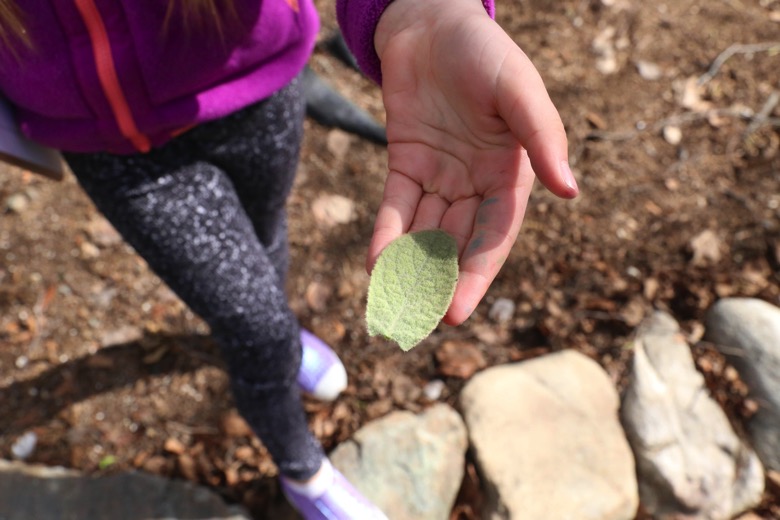 She really enjoyed coming up with words to describe the different textures and many times she had several words to describe a single nature object. This very cool leaf, for example, led to words like, ‘fuzzy’, ‘soft’, ‘furry’, and ‘tickley’, though in the end, she decided that its softness was its most prominent feature when it came to touch. 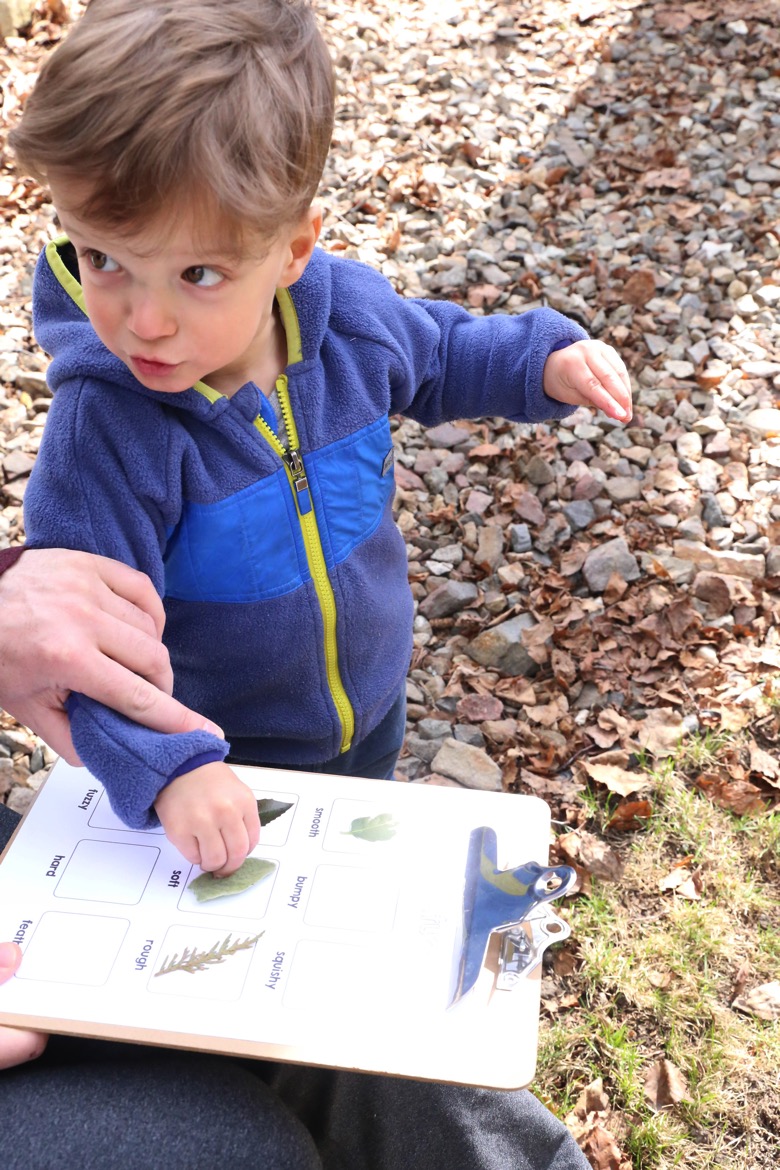 Sam actually really enjoyed adding to his observation sheet too.  Brad or I would put a thick layer {or little clump} of glue down in a box, and he’d run over with his nature item and really press it on to ensure it would stick. 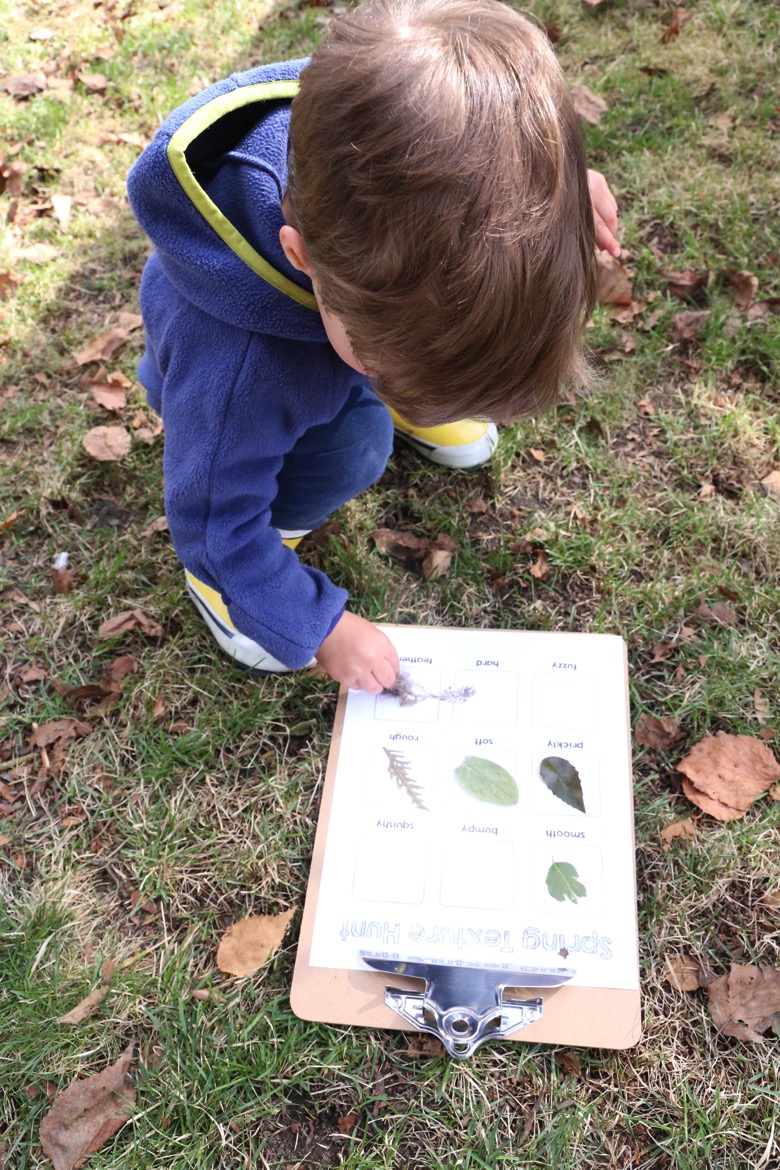 More than anything this was just a fun way to display his little collection of nature items he was so proud of. 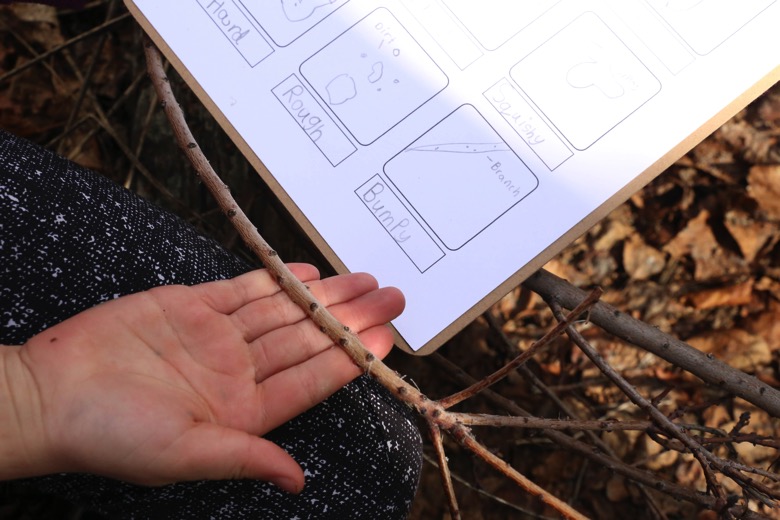 Now I will say that not all of the nature items the kids found were necessarily ‘spring’ items (the crunchy brown leaves that have been hidden under the snow since fall, for example), but I decided that that really didn’t matter.  It’s spring, the items were found during spring, and that was good enough for me!  If you were doing this activity with your kiddos or students and wanted the focus to be specifically on spring items, however, you could of course specify that. 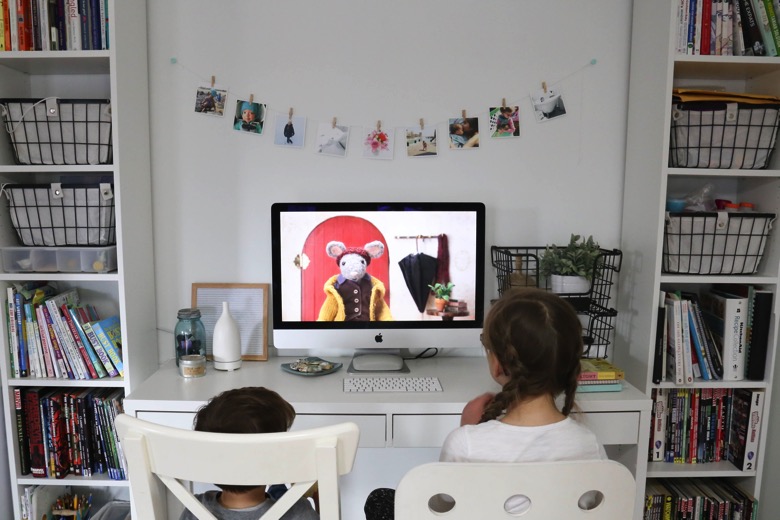 This whole idea, believe it or not, was inspired by a show the kids have been watching {and loving!} lately called SCOUT & The Gumboot Kids.  Have you seen it before?  Now if you know me, you know I’m not a huge fan of television for kids, but my kids do enjoy watching a show now and then {Grae especially} which leaves me bouncing between Netflix and Common Sense Media trying to find something that is not only appropriate, but also hopefully little bit inspiring or motivating too?  {A tall order, I know…}

Well, I’m so glad I came across SCOUT & The Gumboot Kids.  In the series, Scout, a sweet and smart mouse introduces the Gumboot Kids to a collection of clues that leads them outdoors to uncover the wonders of nature…  Things like sunflowers filled with seeds, echoes, falling acorns, shadows, and constellations – all of the most important things!

Our spring texture nature hunt was inspired by this episode, The Soft Rock.  Take a watch and let me know what you think.  Easily my favourite thing about SCOUT & The Gumboot Kids is that the episodes truly inspire you to get outdoors with your kiddos – and how many television programs do that?!  I also really love that each episode includes a mindful moment {something Miss G has been practicing since Kindergarten} and music by Jessie Farrell that is actually really enjoyable {because we all know that not all kids’ music is – hah!}  I also really like that the episodes are around 5 minutes each and best of all?  At just over two and at 7 and a half, both Sam and Grae find the shows interesting and engaging – win!

{US friends, you can watch by subscribing to Curious World or Kidstream.  You can also subscribe to Kidstream via Amazon or Comcast Xfinity.} 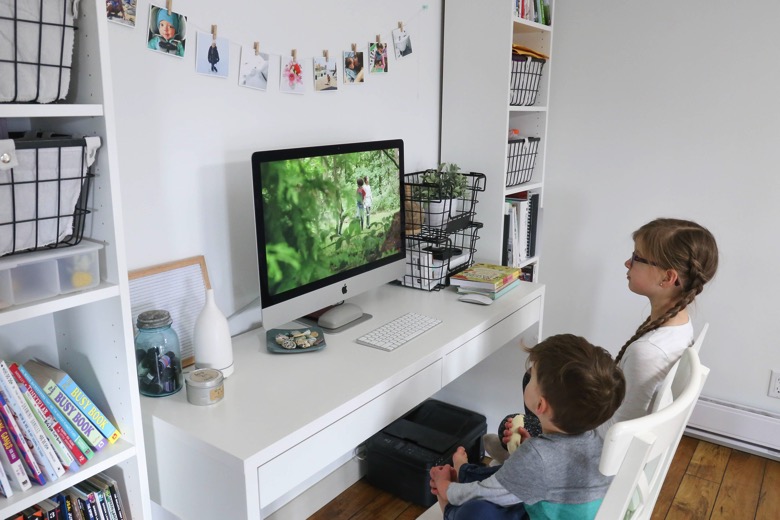 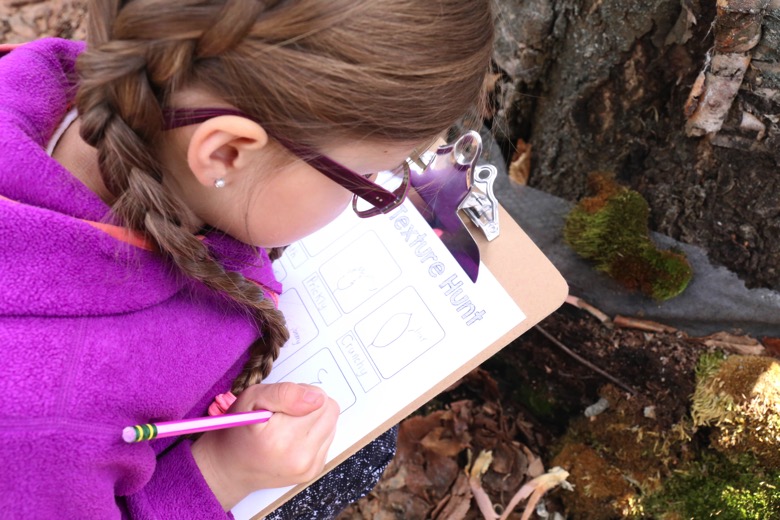 Alright, now back to our hunt… 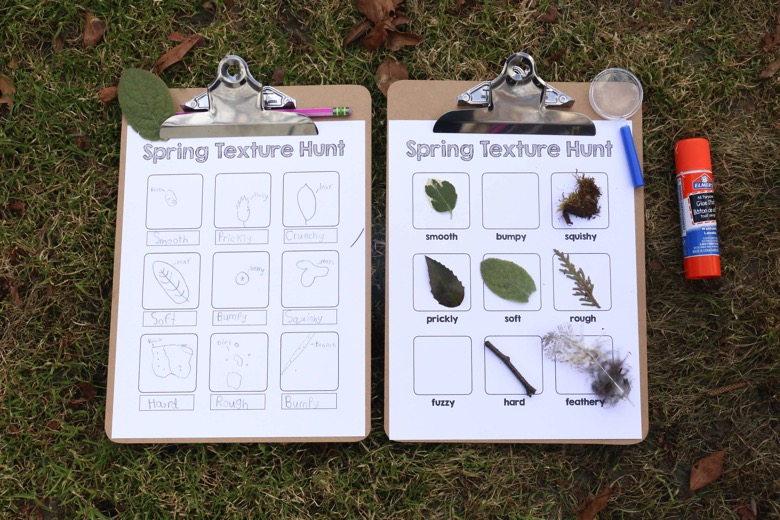 Here’s how things ended.  Grae probably could have kept on texture hunting for another hour or so, and Sam found a bunch really cool nature items but was ready to move onto other things before his collection sheet was fully complete – perfectly age appropriate in my opinion. 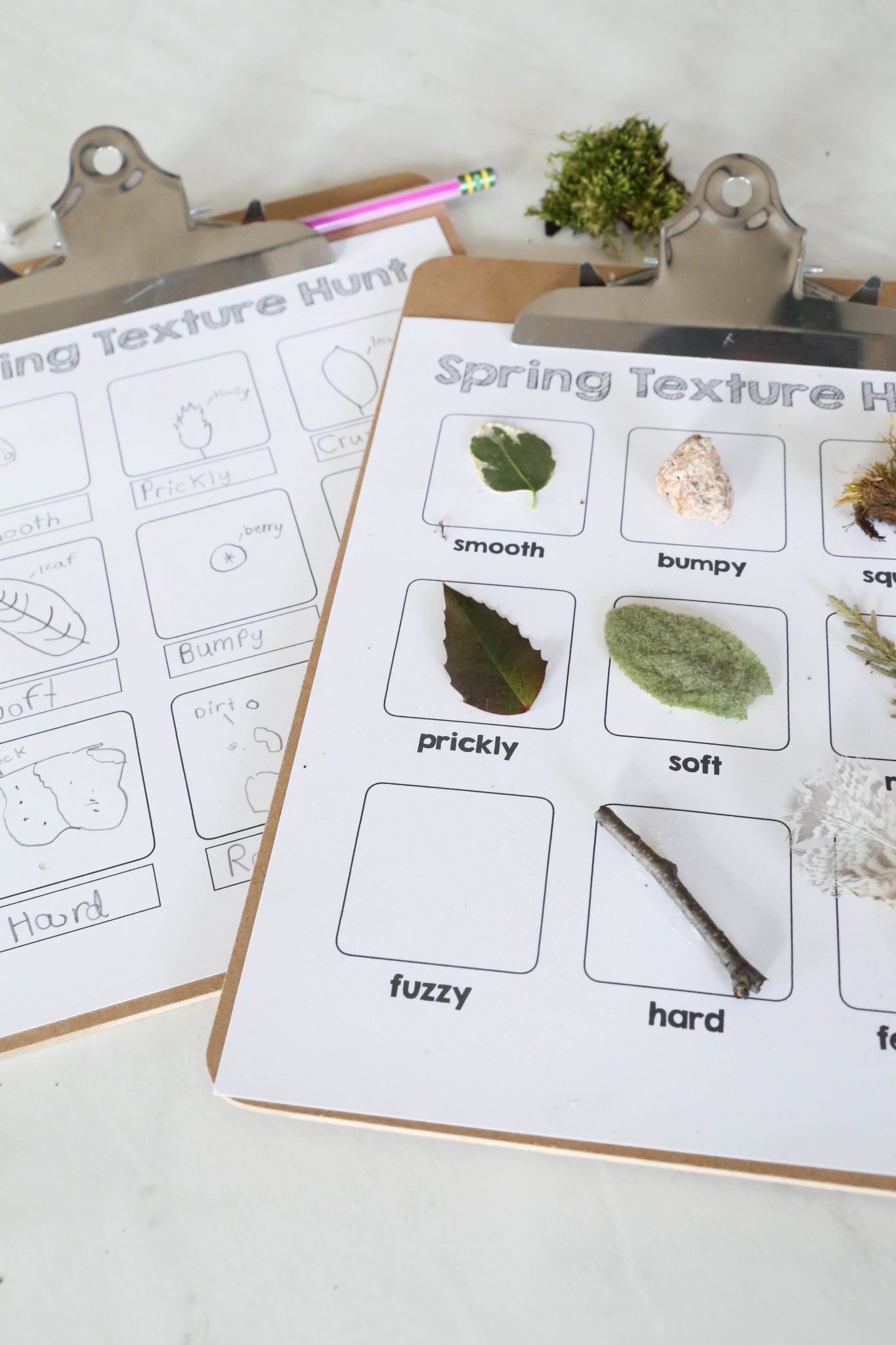 If you’d like to try this activity with your kids or students, feel free to use our printable observation sheets: 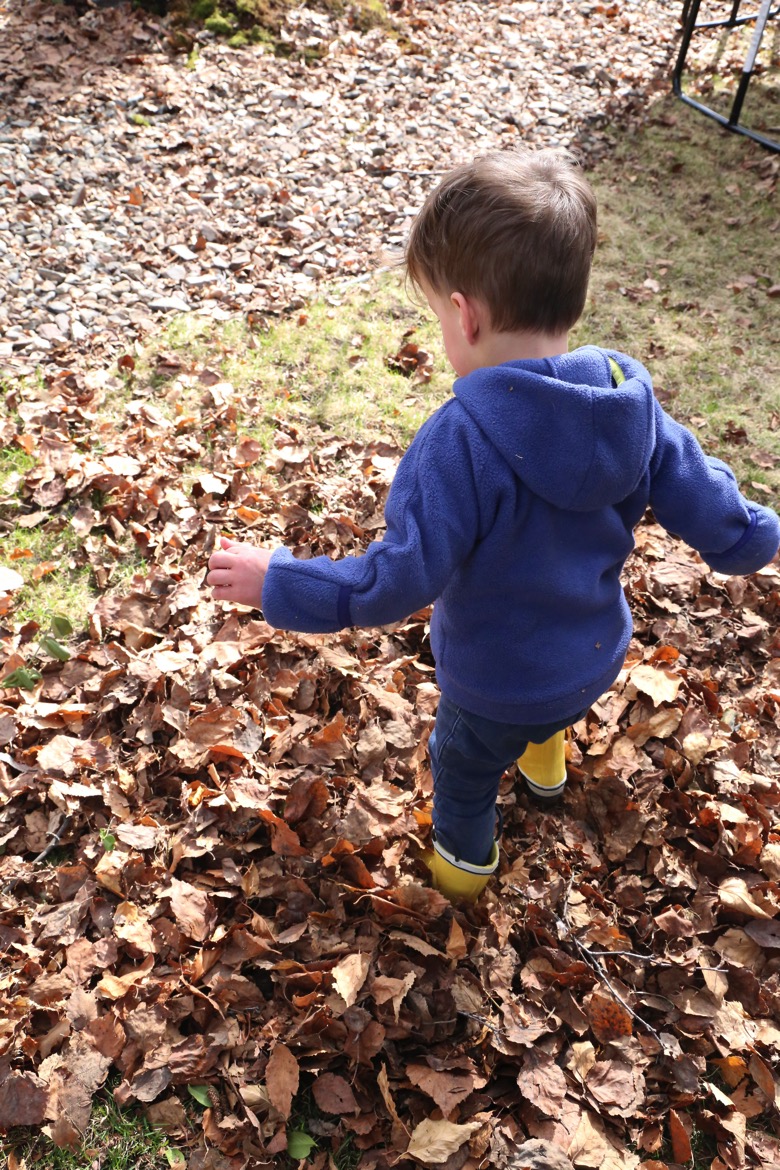 Enjoy your time outdoors with your little ones and be sure to check out The Gumboot Kids series when you have a chance!

And if you already have little SCOUT & The Gumboot Kids fans like I do, be sure to check out their new merchandise line.  Miss G and I recently picked out a few things and she’s anxiously awaiting their arrival in the mail!

This post is sponsored by The Gumboot Kids.  As always, all opinions and stories are my own and I only ever share things that we truly enjoy.

Growing up, my brother and I used to stay at my Baba’s (grandmother’s) house for a week or two or three each summer.  Being the phenomenal lady she is, she’d bring us into the forest, chop down what seemed like huge trees, and have us help her haul them out to create outdoor teepees worthy of side tables and mattresses. Our summer teepees are one of my very favourite childhood memories now as an adult, and definitely something that I’d like Gracen to experience.  While not nearly as grand, today we threw together a very quick little teepee after stumbling across some bamboo sticks.  Gracen was in awe of our new structure and immediately went in the house to retrieve her pillow and a couple of blankets.  It’s amazing how special a sheet and some sticks can be when put together isn’t it?  There’s no doubt that there will be many more of these in the weeks ahead (tutorial to come, for those who asked) and I can’t wait. 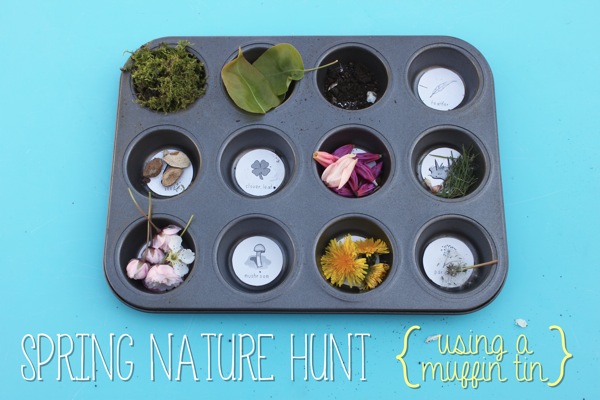 In honour of Earth Day, Miss G and I took to the streets of our neighbourhood for a little spring-themed natured hunt today.  It was the perfect way to spend our afternoon…soaking in some sunshine, taking in the fresh air, and observing the nature around us a little more closely than we usually do. 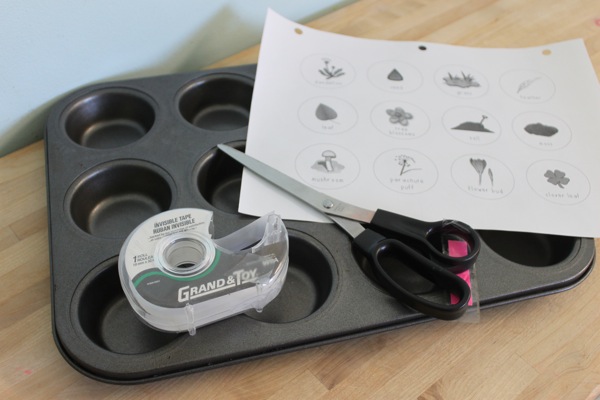 Beforehand, while Grae was napping, I gathered up a few things…  A muffin tin to serve as a collection receptacle, a print out of nature item tags sized to fit in the bottoms of muffin cups, some scissors, and some tape. 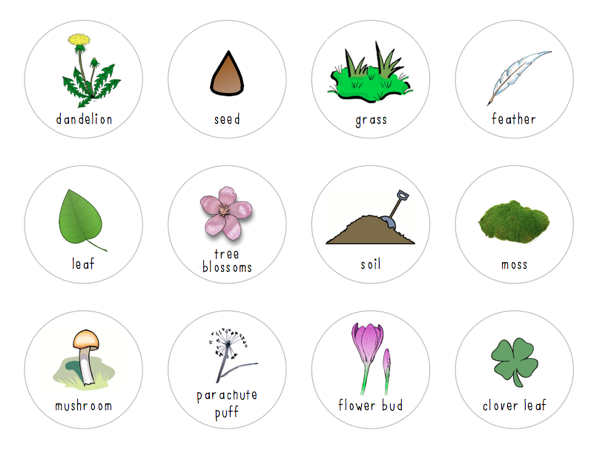 In order to create my tags (which were printed on paper from our recycling bin…hence the holes), I simply created 12 circles sized to fit in our muffin tin (4.5 centimetres in diameter for ours), found some clipart via Google Images, and added some text.

Then I printed them off, cut them out, and stuck them into the bottoms of the muffin tin cups with small pieces of rolled tape.

When Gracen woke up, she was eager to get outside and get searching.  We quickly went over the items we’d be on the lookout for and headed out.  First stop? The backyard to see if there were seeds underneath our plum tree.  Sure enough, there were! 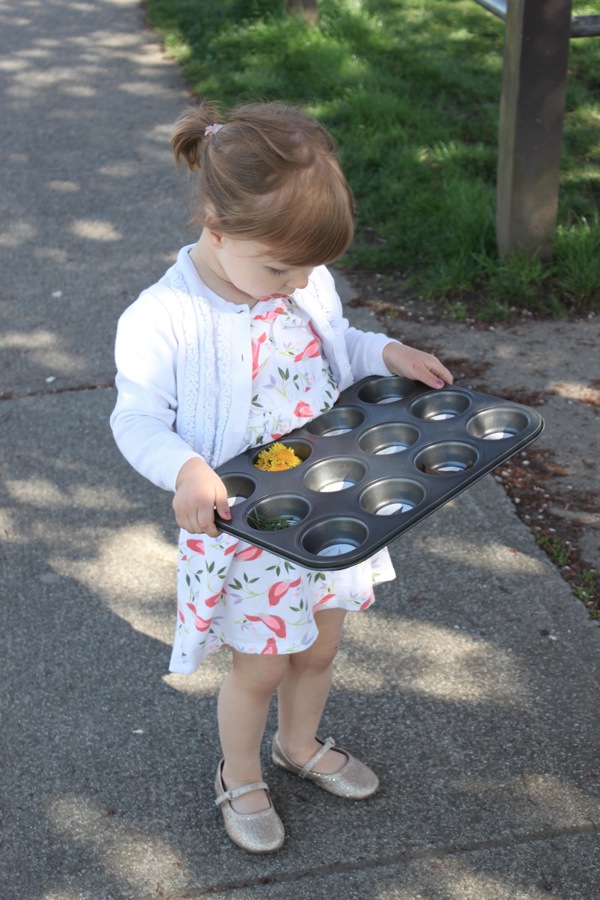 Dandelions and grass were easily collected in our yard, and then it was off down the street to one of the few trees that still has blossoms on it. 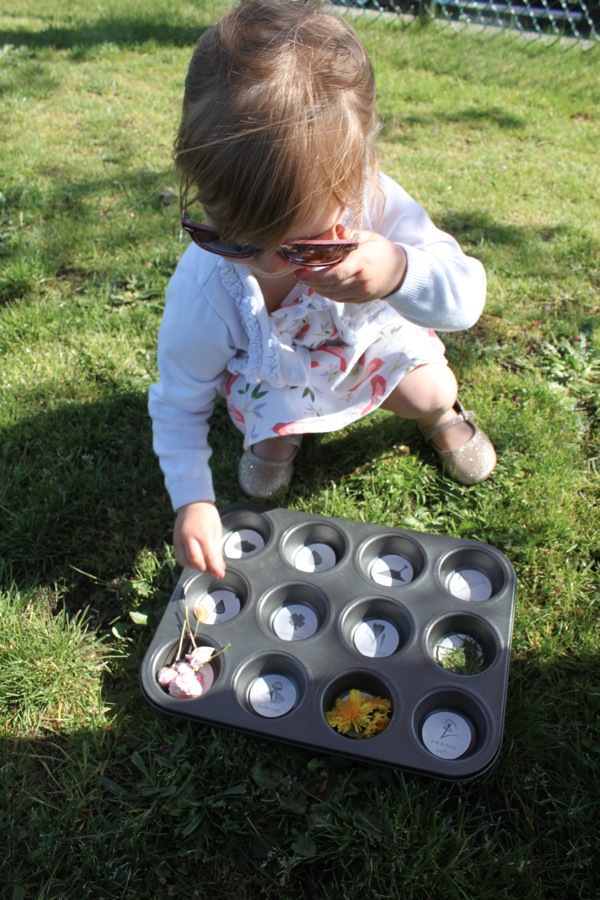 After each new find, Grae would take inventory, decide on a couple of new things to focus on, and head in a particular direction. 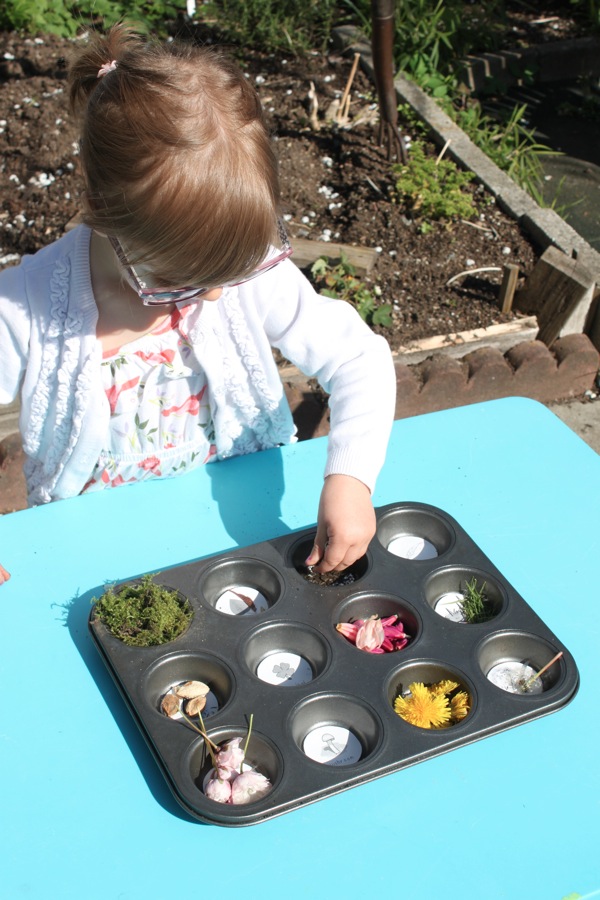 This time she decided we’d better head back to the backyard to collect some flower buds, moss, and soil from the garden – success! 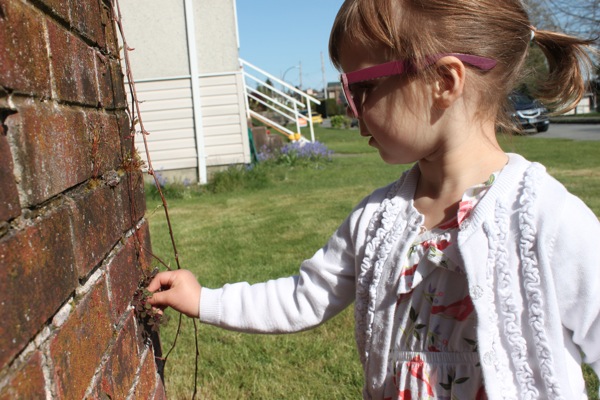 One of our last stops was to collect a few clovers from a little patch growing through some brickwork in the front of the house. 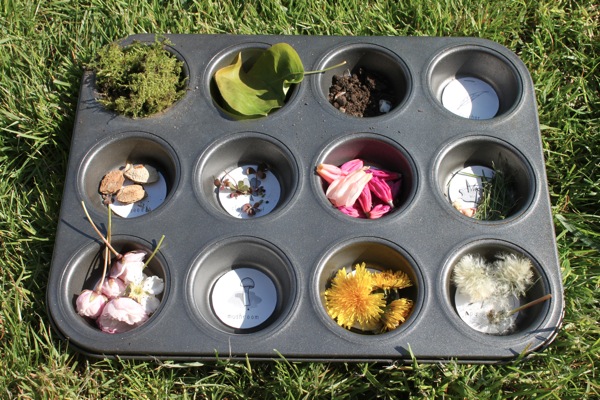 At this point, we had done pretty well, but as hard as we’d looked, we hadn’t yet found a mushroom or a feather. 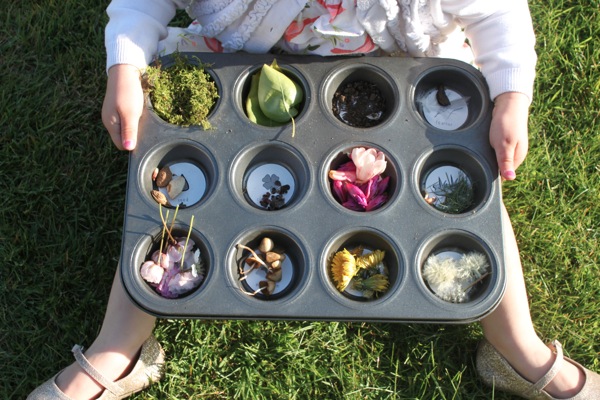 We decided we’d take a little break in order to some sidewalk chalk art, and Gracen would ask Papa to take her out again once he returned from work for the evening.  Low and behold, they returned with the entire tray full! 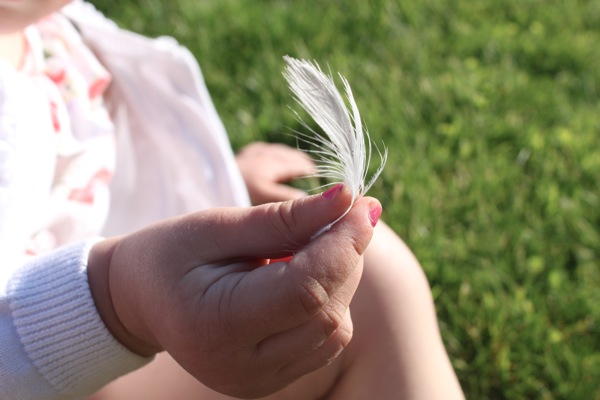 Gracen really enjoyed this activity and we’ll definitely be using the muffin tin method in games and hunts in the future.  It gave a clear visual of what was needed and what had been found, our items stayed in place and were organized, and Grae really liked everything having its own spot and filling up the entire tray.