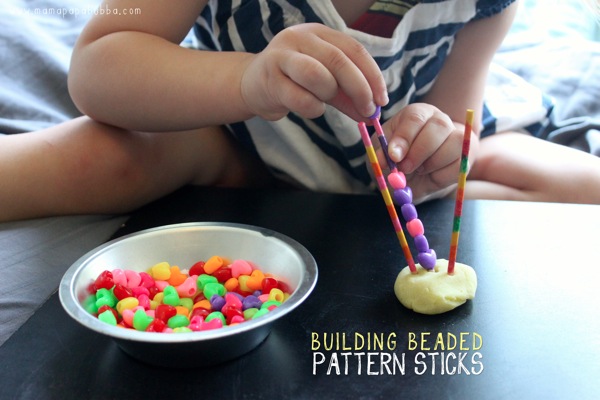 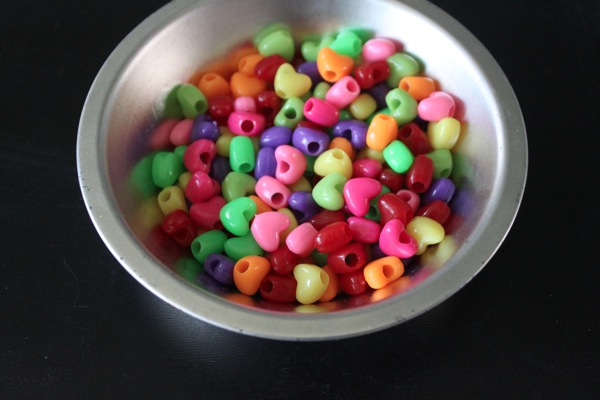 The other day while picking up a few craft supplies, Miss G absolutely fell in love with these heart-shaped pony beads.  Next to them, we found tiny little wooden dowels that the beads fit onto perfectly.  At the time, I really had no idea what we’d do with the pair, but I knew we’d figure something out. 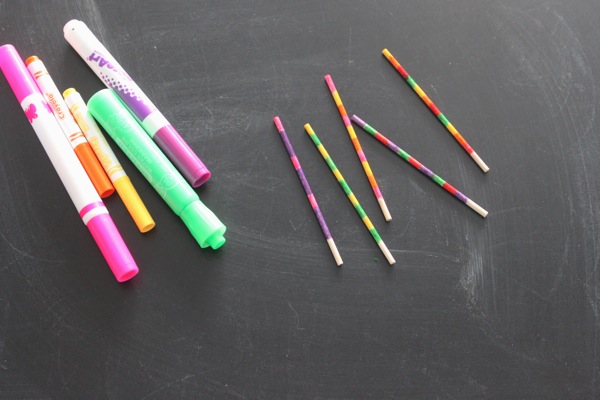 Turns out, the answer was play with patterns!  I was quite surprised by how early on Miss G grasped the concept of patterns…  I remember being in the kitchen cooking dinner one night long ago and hearing Brad ask Grae about a pattern out in the living room.  I thought to myself, ‘she’s way too young to know what he’s talking about’, but sure enough she proved me wrong on the spot.  So since we really haven’t explored them all that much, I decided our beads and dowels would be perfect for it.  While Miss G napped today, I spent a little bit of time catching up on my RSS feed while colouring pattern stripes on the dowels with markers.  This time around, I chose to pattern the entire dowel, but next time around I’d probably just start the patterns in order to let her complete them on her own. 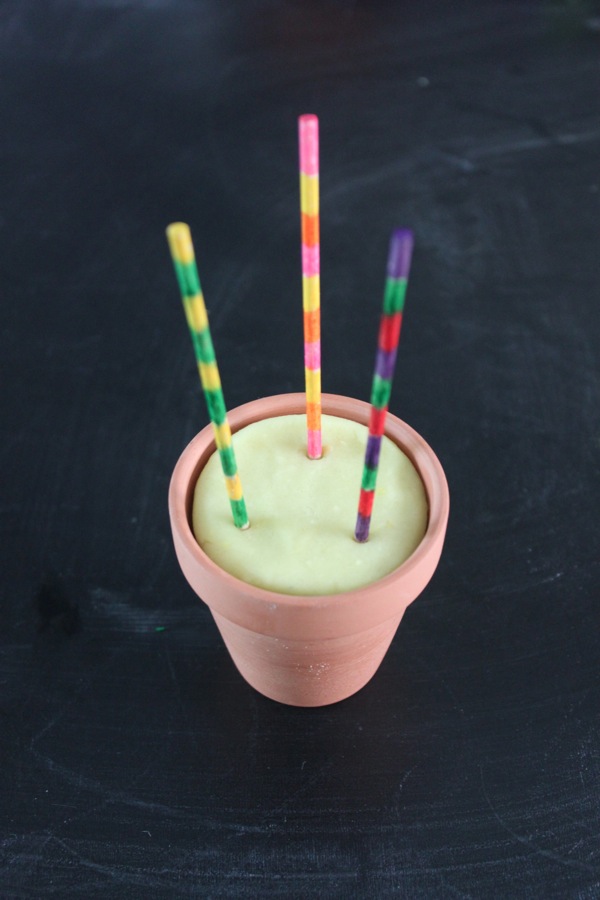 With my patterned sticks complete, I knew I wanted to stand them upright somehow.  Out came some homemade lemony play dough and the little pots we used for our flower garden yogurt parfaits, and voila.  Mission accomplished. 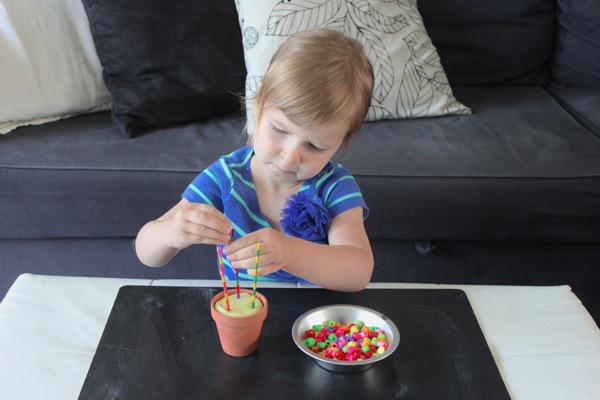 When Gracen woke up, she immediately saw the little station I’d set out and was thrilled.  After a squeal and cheer, the first thing’Mama, I want you to tell me what to do’, but when I asked if she really wanted me to tell her what to do or if she wanted to just play, she decided she was happy to just play. 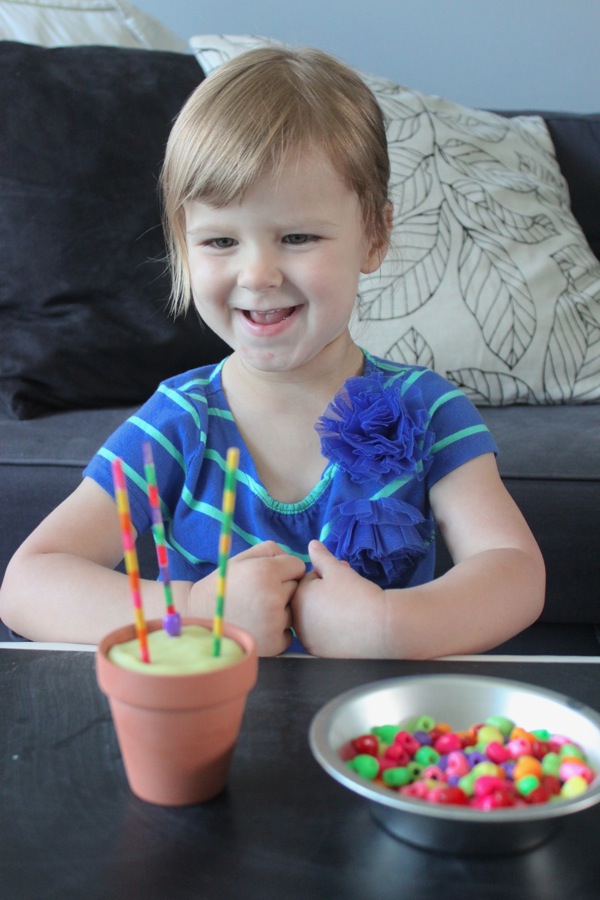 Of course she immediately realized that the colours on the dowels coordinated with the bead colours and began matching them up. (Just look at that little face… Makes me melt!) 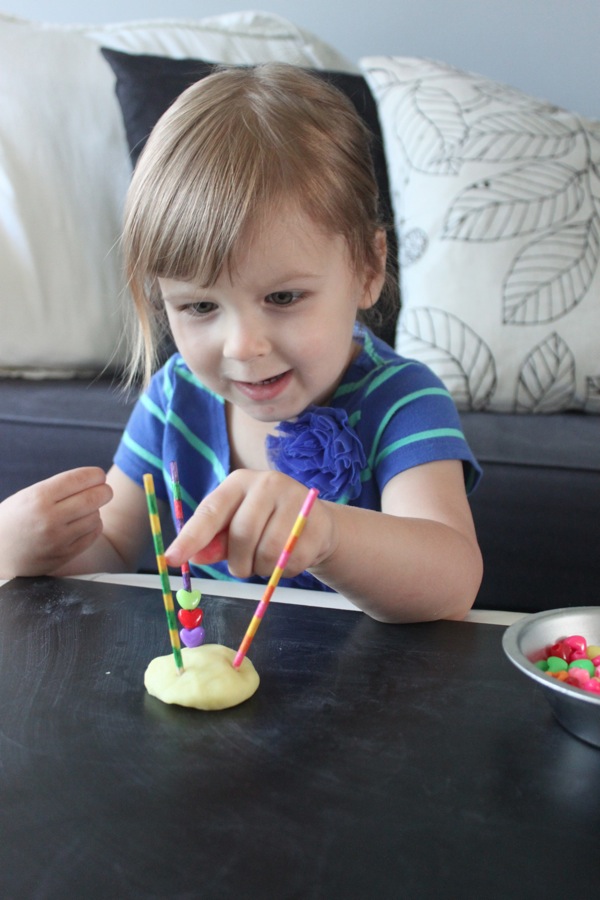 Shortly after beginning the activity, I realized that the dough-filled pots allowed the dowels to sink down as she added beads, so I changed things up a little bit and just used a play dough pancake to hold the sticks up instead.  She realized that the stripes in fact made patterns, and ‘read’ each one out to me. 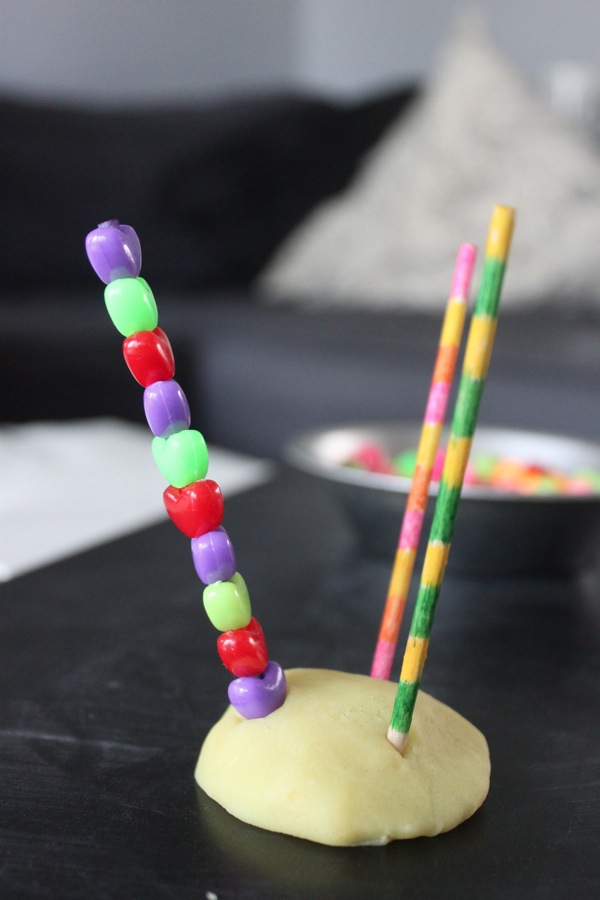 Not only has this activity been fun and great for discussing colours and patterns, but it’s also great fine motor practice too!  Fitting the tiny beads onto the tiny dowels requires some serious concentration. 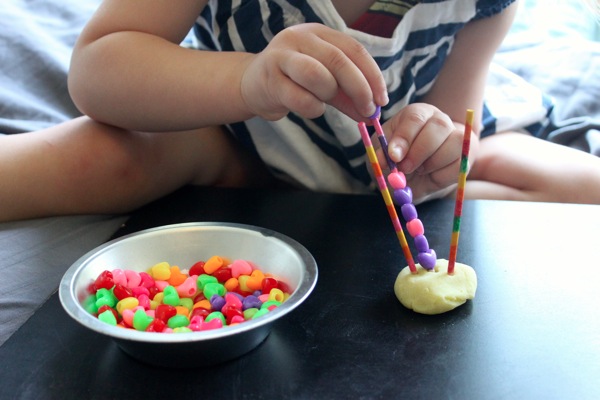 This activity has been out for several days now, is still out currently (dried up play dough and all), and gets some decent attention each day…  A hit in my books. ☺