I was beyond thrilled when I stumbled upon Happy Hooligans a couple of weeks ago.  Jackie, the woman behind the blog runs an in-home daycare and is all about old-fashioned play, open-ended exploration, and letting kiddos get down and dirty.  My kind of gal!  Upon scrolling through her posts, I immediately knew that this activity would be a huge hit with Miss G.  The only problem was that I wanted to surprise Grae with it on a sunny day.

Well, today that day finally arrived!  I laid a blanket out in our backyard, filled a bin with some warm, soapy water, added a couple of drops of blue food colouring, and we had a bath.  Next, I collected a couple of wash cloths, hand towels, a tooth brush, a hair brush, a bath poof (that’s my technical term), a water-filled mister, and a couple nearly empty soap bottles topped up with water.  Gracen’s contribution was her naked and nearly 50 year old baby doll that used to be mine and was Grandma Sue’s before that. Voila – a baby bath station! 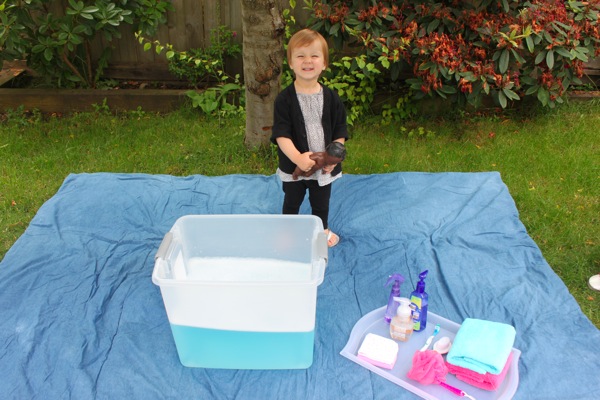 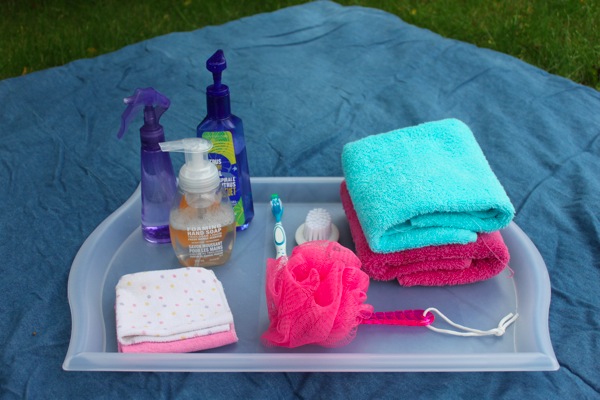 On a side note, have I ever mentioned the fact that there are 7 people living in the basement suite of our house? Because there is. Well 7 permanent residents, plus a few of extended family members that are around A LOT.  In a suite that is probably fit for 2 or 3 college students who don’t care to cook. And while they’re quite nice, having that many people living below us can be quite challenging at times…  The constant come and go, picking up after 5 children other than our own (in a yard that is supposed to be entirely ours), and the noise… Oh, the noise!

Why am I mentioning all this in a post about a baby bath station, you wonder?  Well, because the middle child of the 5, a sweet little girl who is 6 years old, has taken quite a liking to Gracen and the activities I set up for her.  For the past month or two, it seems like the moment we head out into the yard, she comes running up the stairs to join us. And while I really don’t mind including her and watching her for an hour here or there, it sometimes makes new activities fall a little flat.  Because she’s several years older, she dives into new activities without a thought.  But Grae, on the other hand, needs a little time to cautiously explore and figure things out before really getting into some things.  The result is that Gracen sits backs and watches, doesn’t get involved, and then moves on to something else entirely.

Needless to say, today’s sensory bin got off to a bit of slow start.  Gracen was really excited to get started, and had some fun, but once it became difficult to get her hands on any of the goodies, she sat back, watched, and soon decided she’d rather do something else while her little friend enjoyed her new baby bath. 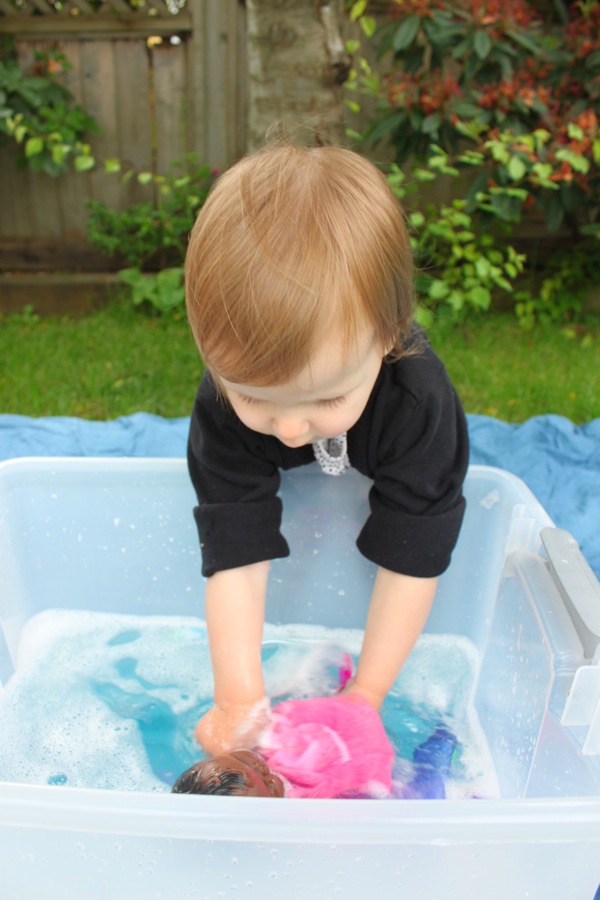 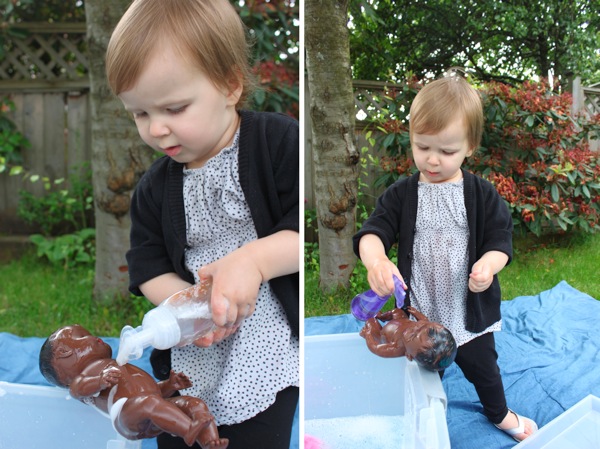 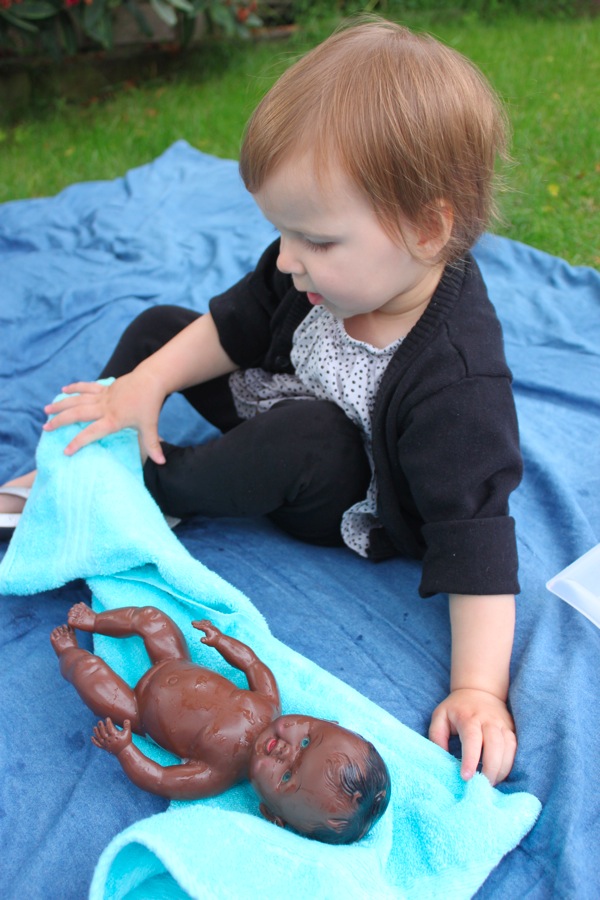 I felt bad, but after a little while, I politely dismissed us from the backyard and shifted our things over to the solarium.  The perk with having to move? The solarium was so nice and warm that the little lady was able to don her tankini. With a little more space to move and explore, Gracen really got into it. 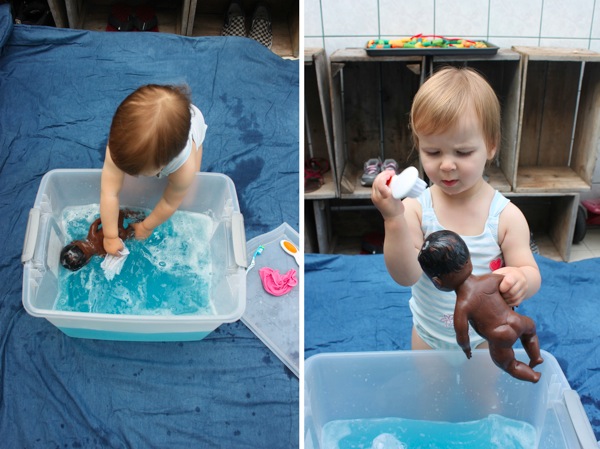 There was washing, scrubbing, hair brushing, and grooming… And before long, our little fishy went for a bath of her own. It was inevitable, really. 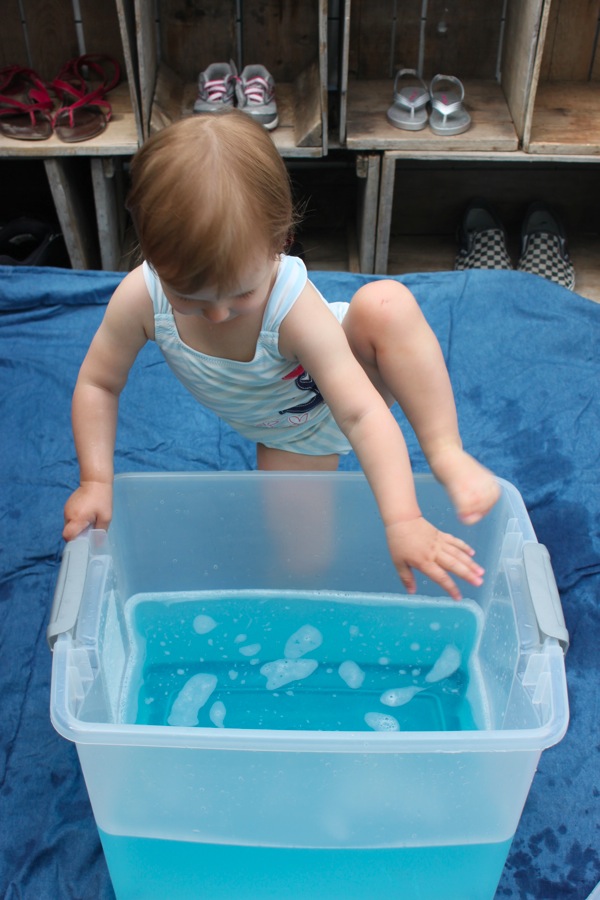 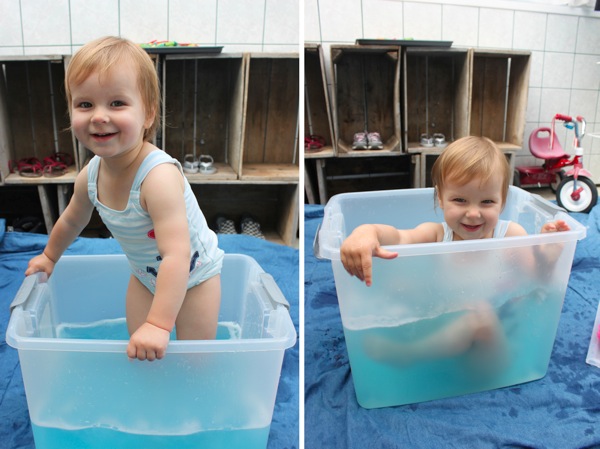 Soon it became a bath a tooth brushing station for two. 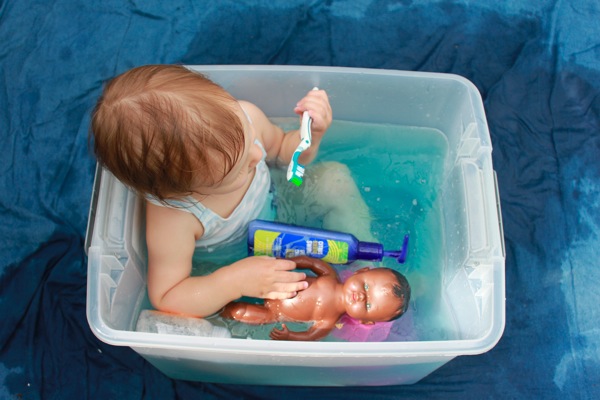 Probably the favourite part of the whole station though, was this little one dollar purple spray bottle. 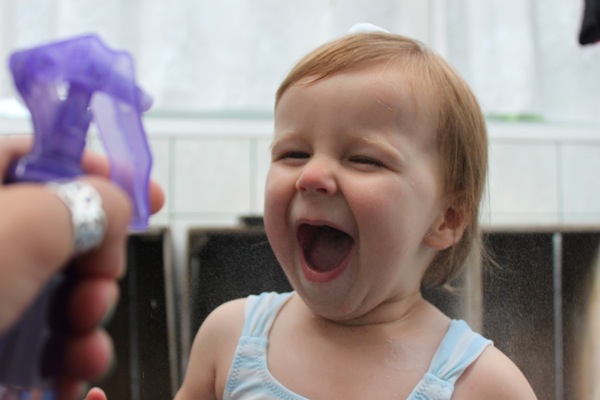 Somehow, over an hour in, our little bath station shifted gears a little… 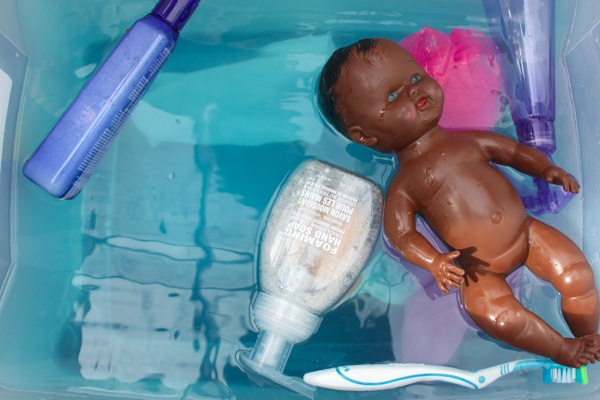 With baby’s hair groomed just so, Gracen wanted her hair done too.  She asked for a ponytail, quickly changed her mind to two ponies, and by the time she was done with the pack of elastics, she wanted eight.  This was the result. She thought it was pretty hilarious and asked me to take photo after photo, just so she could see herself on the camera’s display. 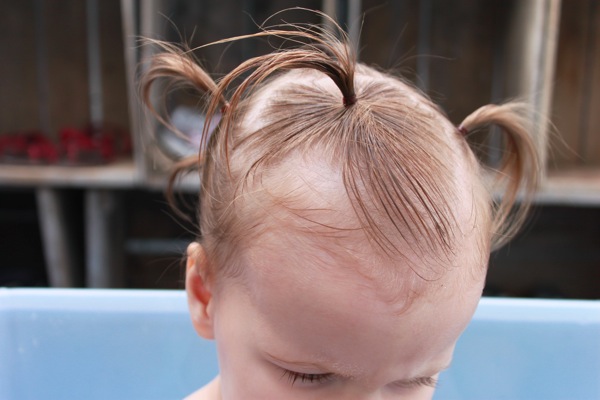 Overall, this new sensory experience was a huge hit.  When all was said and done, Gracen was clean, smiley, and sufficiently pruned. 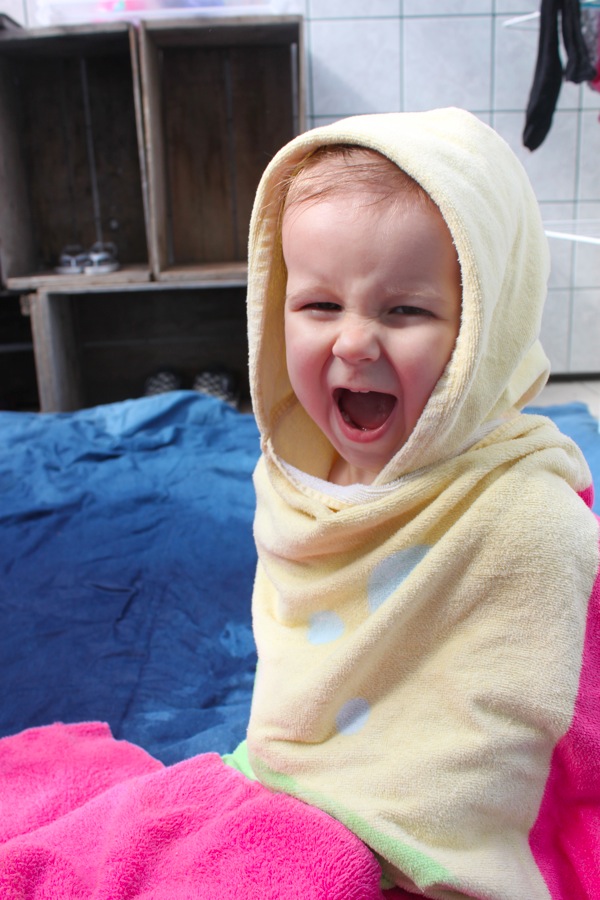 ♥
You can see Gracen’s beach, ocean, gardening, moon dough, construction, and bird-themed
bins by clicking on the links.