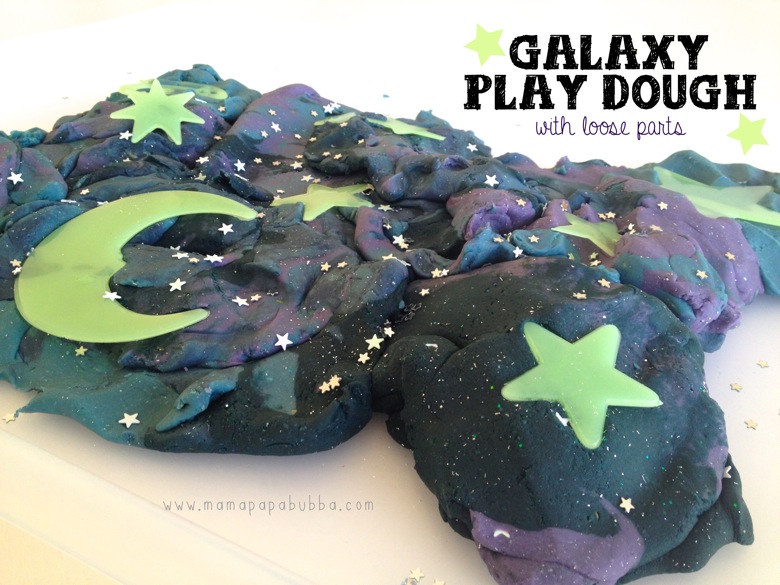 One of the things I do for the Crafty Kids class i teach here in Kuwait is prepare some open-ended materials for the children to explore and create with after they’re done their main project for the day.  Since this week’s theme Bright Minds was ‘bedtime’, I decided to prepare what I originally called ’sleepy time starry sky play dough’.  My crafty kids loved it and it continued to bring all sorts of fun throughout the afternoon once we were home.  It was a big hit again today, and Miss G actually chose it as one of the activities to have out during our weekly play date with her little buddy from downstairs. 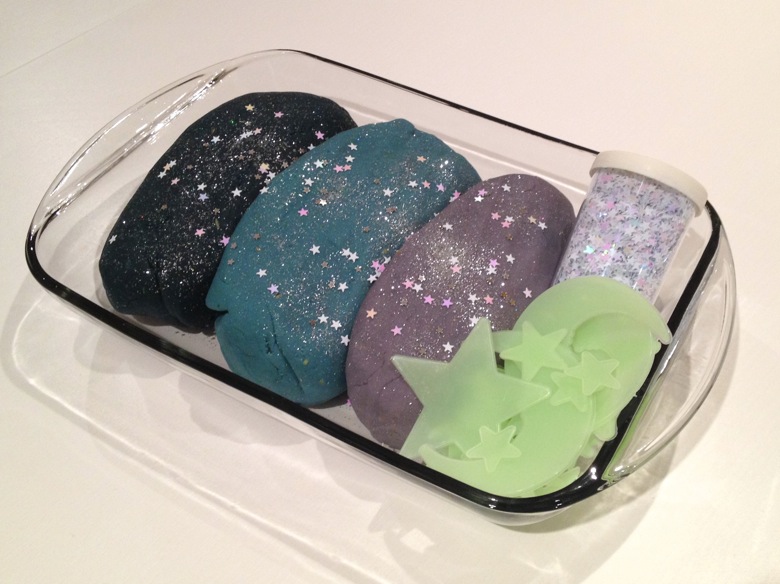 Here’s what it looked like late at night after I’d just finished making it..  All it is is 3 big batches of our favourite ever no-cook play dough dyed deep night sky colours with our beloved Wilton gels.  To make it look more like a starry sky, I added a bunch of silver glitter, as well as some iridescent star-shaped confetti.  Because we love pairing play dough with loose parts, I hunted down some glow-in-the-dark ceiling shapes to incorporate in the invitation to play. 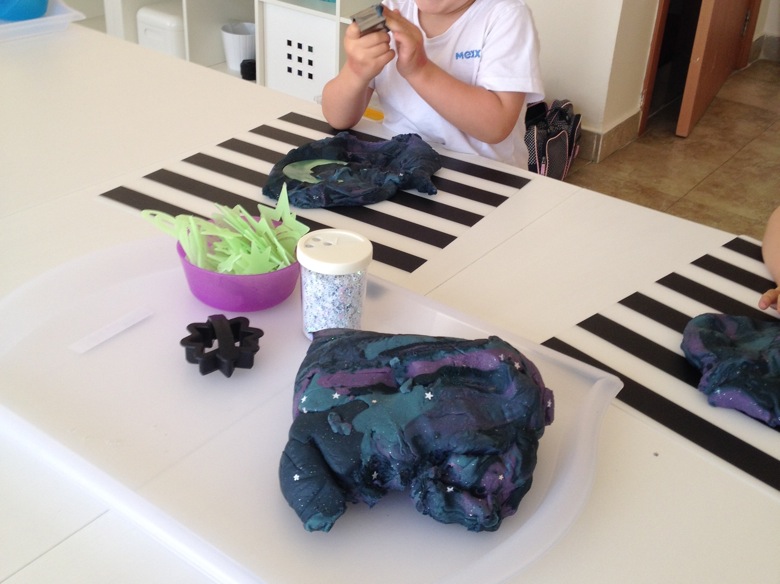 Just to add another element to the sensory experience, I added a couple of cotton candy Duncan Hines Frosting Creations packets to the dough, which made it smell absolutely delicious! 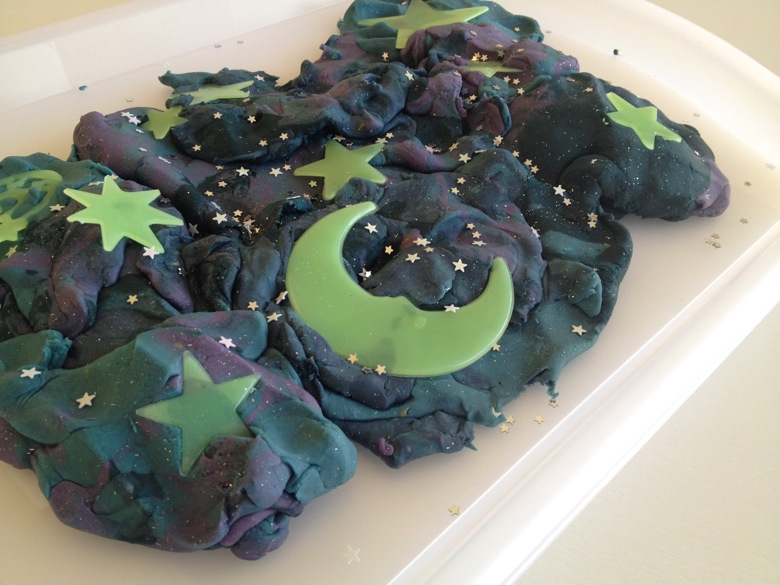 Before long, the colours were swirled together and our dough was covered in moons, stars, and planets.  I think this is when we decided to rename it galaxy play dough. 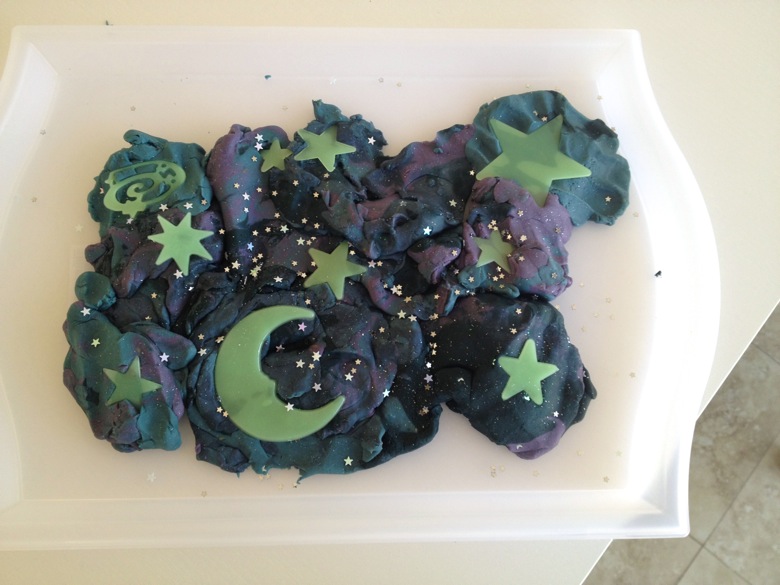 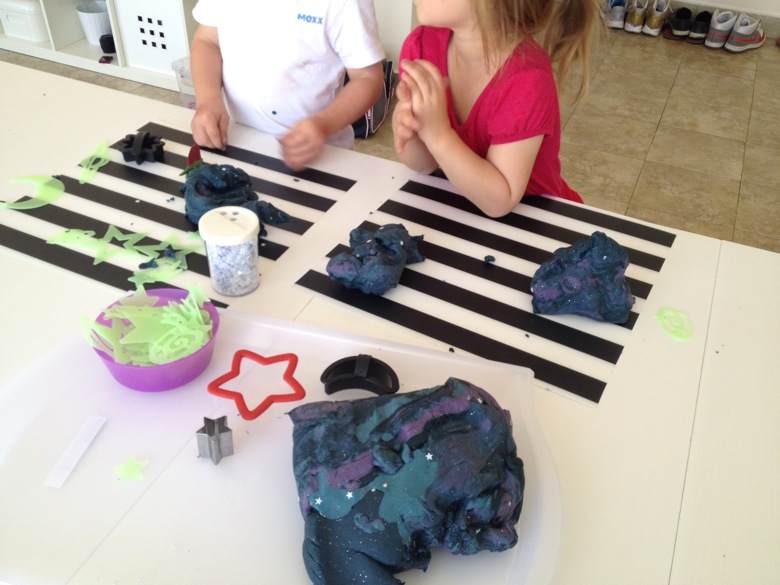 Part way through playing, Grae and her little friend requested some cookie cutters, so we dug out some star and moon-shaped ones which extended the play for quite a while longer. 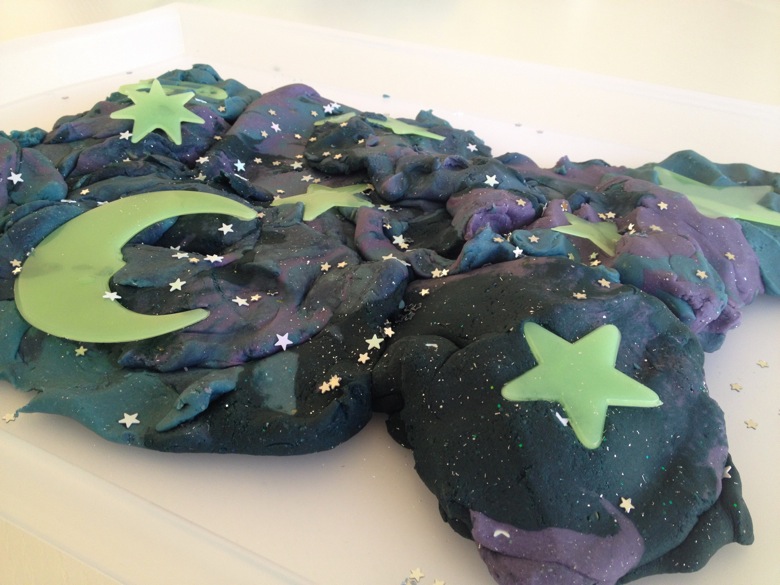 When we were done, we simply plucked out the glow-in-the-dark parts, and put the dough into a tightly sealed container for next time… Which will probably be very soon!

Galaxy Play Dough  (make one batch for each colour)

Mix the top set of ingredients with a whisk.  Add the boiling water and food colouring and give the mixture a really good stir.  Let cool for about 10 minutes before kneading really well.  Pair with star-shaped confetti and glow-in-the-dark stars if desired.