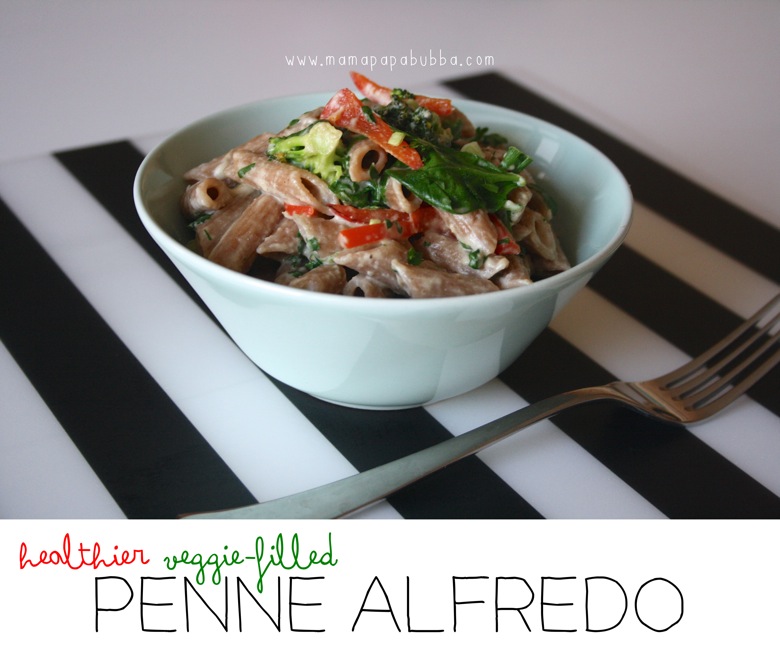 Each month my little sous chef and I team up with our good friends Tairalyn over at Little Miss Mama and Hillary over at Hillary with two Ls (please) for some friendly bake-off fun.  Though I feel badly about it every round, Tairalyn takes on the recipes as we find them – full of butter, sugar, white grains, and processed ingredients {bless her heart}.  Hillary, on the other hand, takes the original recipes and healthifies them somewhat, adding fruits, veggies, and her homemade touch where she can, while hanging onto just a little bit of the naughty deliciousness.  And our task over here in the desert?  Taking the ridiculously unhealthy recipes we find and full-on hipifying them {yup, hipifying… I said it}.  That means we do our very best to use homemade / wholewheat / organic ingredients, we skip the sugar all together, and we add fresh produce and other nutrient-packed ingredients when possible.  Fun, right?

For this month’s recipe, we decided to tackle a traditional Fettuccine Alfredo made with white pasta and filled with butter, cream, cheese, and next to nothing from the veggie department.

Making this dish a ton heathier was actually a fairly easy task…  Just replacing the white noodles with something heartier, using full-fat milk instead of cream, and adding a swack of veggies took it up several levels in the healthful department.  But since I’m a sucker for a dish that covers all of the food groups, we also added some protein in the form of a cashew cream sauce.  Yum.  Sooo good and super creamy while not having to use nearly as much milk or cheese. 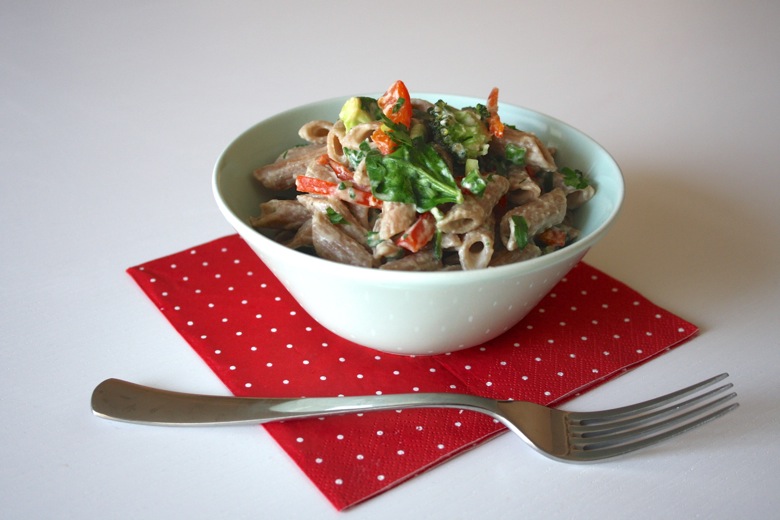 Gracen gobbled it up {minus the spinach – she hasn’t been into leafy textures for a while now} and Brad even mentioned how good it was!  And while I agreed with both of them, the best part of this recipe for me was that it made enough for two full meals, which meant a night off of cooking for this mama – score!

Place the cashews in a glass cup and add boiling water until the nuts are just covered.  Set aside.

While the cashews soak, add the olive oil, red pepper, and broccoli florets to a pan and sauté over low heat until almost soft. Set aside when done.

Bring a big pot of water to a boil and cook the spelt penne according the directions on the package.

While the pasta cooks, dump the cashews {along with the water} into a blender and puree until completely smooth.  Set aside when done.

Next, sauté the garlic over low heat with the second tablespoon of olive oil.  Add the milk and bring to a simmer.  Add the cashew cream and bring temperature back up. Stir in the parmesan, nutmeg, salt, and pepper and heat through.

Toss the pasta, sauce, cooked veggies, parsley, green onions, and spinach together over medium heat until the spinach just loses its crispness.

Now for the best part… Check out the versions my ladies have cooked up for you!

Health conscious but not quite as crazy as us?  Hillary’s super cheesy but veggie-fied version is for you!  In the mood for something rich and glorious? Tairalyn’s buttery cream-filled version is just what you need!  Whichever you pick, enjoy!!