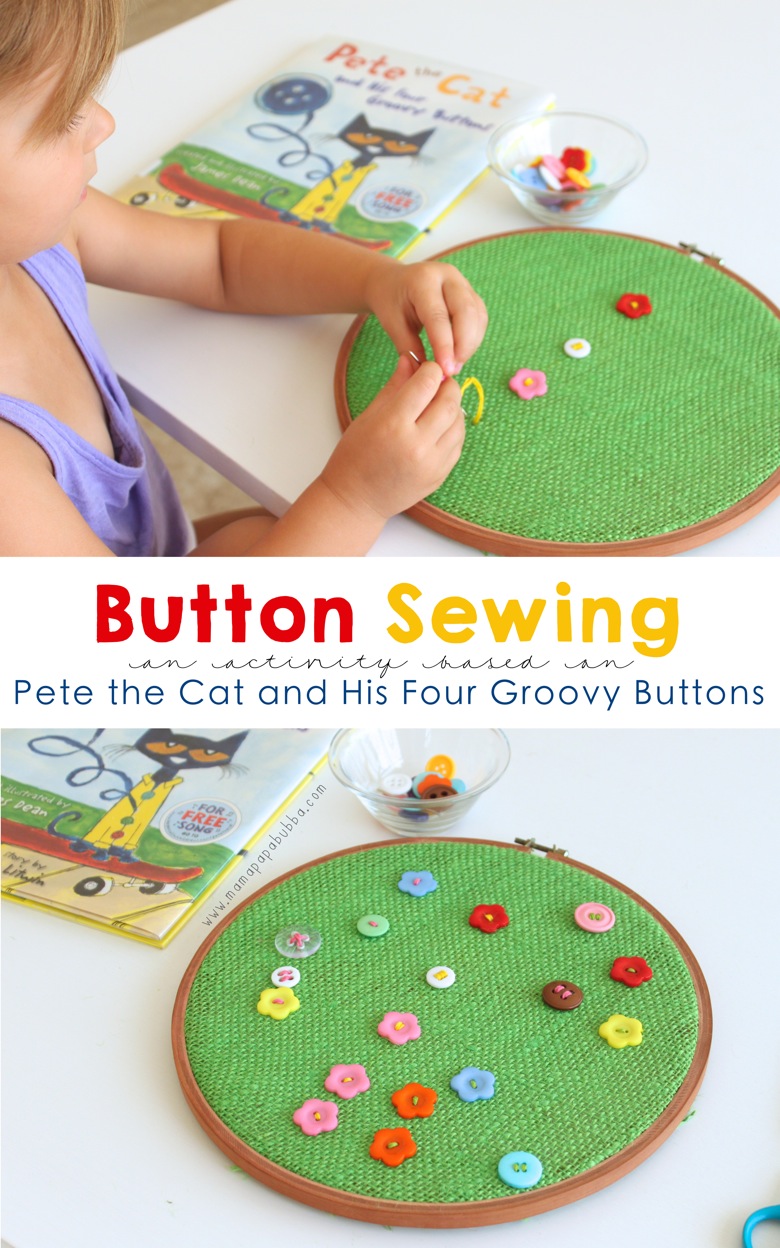 Something I’ve wanted to start doing with Gracen for a long time now is fun hands-on activities based on our very favourite books.  We looove reading and because we have a limited book collection and limited access to outside libraries here in Kuwait, our favourites get read over and over and over again.  What I’m saying is – getting a little more out of them with a corresponding activity is a very good thing {and would be even if we had a huge home library}.

Our first book activity was actually a really fun project based on a classic, Eric Carle’s The Very Hungry Caterpillar, but I’ve yet to share it here quite yet {soon!}  For our second book activity, we went with an old favourite – Pete the Cat and His Four Groovy Buttons.  If you’ve yet to read it, you must! It’s about Pete, an optimistic cat, who is continuously losing his groovy shirt buttons, but continues singing his {very catchy} song because, ‘Stuff will come and stuff will go, but do we cry?  Goodness no!  We just keep on singing’. 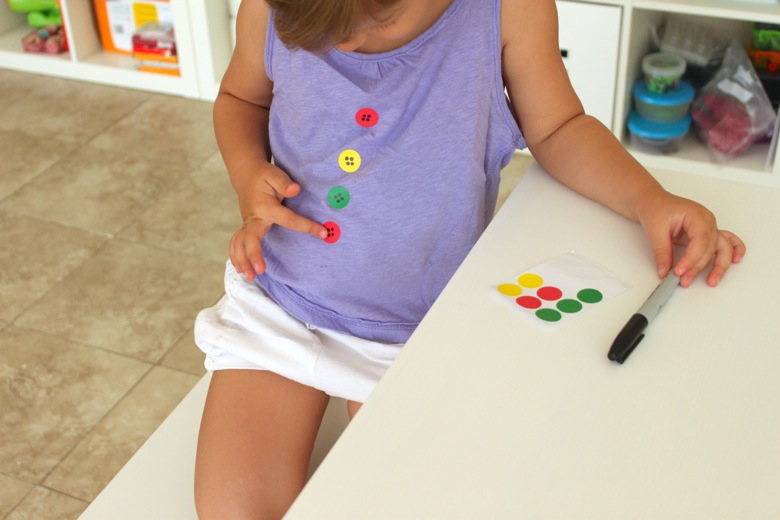 We’ve probably read the story about a hundred times, and it just never gets old.  This time around, we added in a fun element by using dot stickers to create ‘buttons’ for Grae’s shirt. 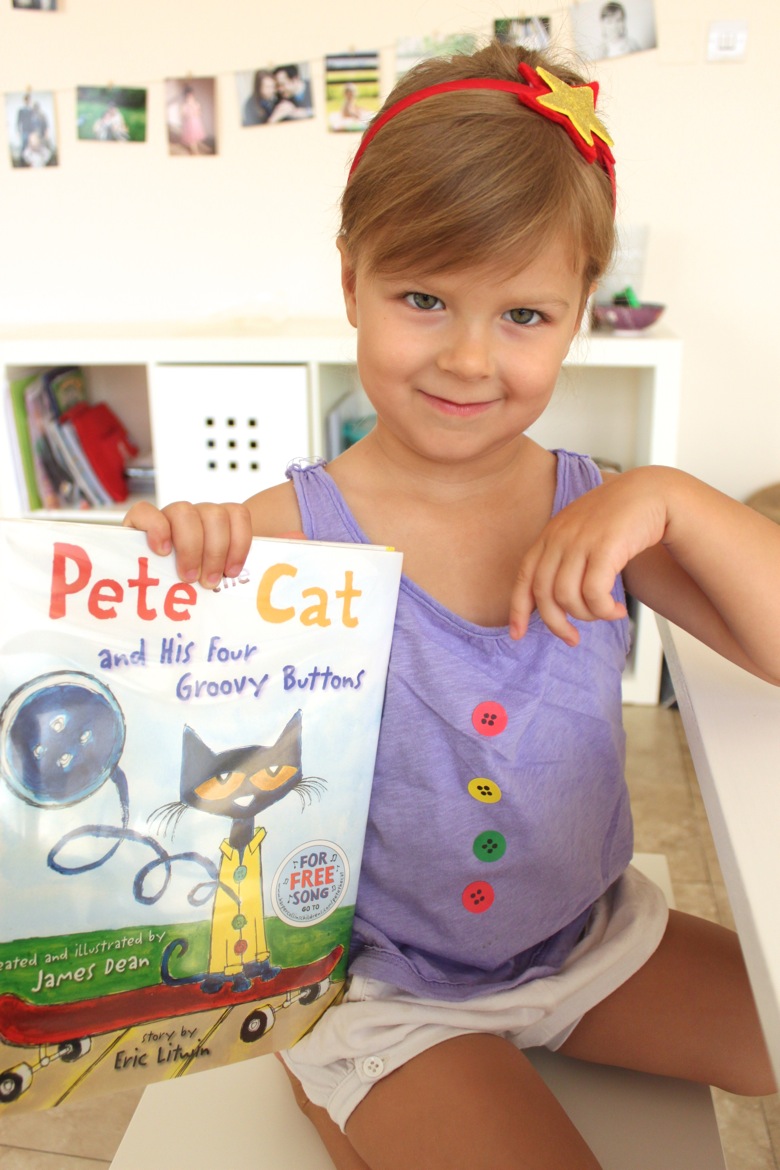 While she did point out that her buttons were different colours than Pete’s she quickly added, ‘but that’s okay because being different is good!’  {Ha – love her.} 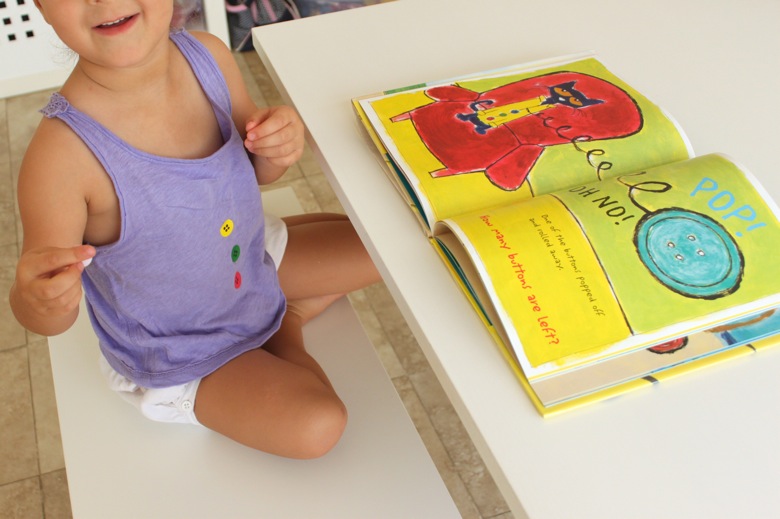 Throughout the story, anytime Pete would lose a button, she would too – which she thought was pretty hilarious!  I wasn’t sure where the missing buttons would get put, but she knew exactly where she wanted them – on my hand so we could easily find them come round two. 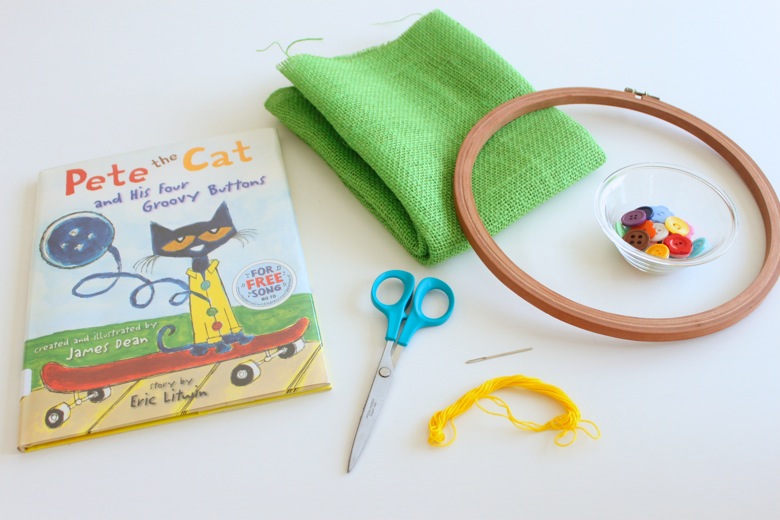 After reading the story, we talked about Pete’s problem, which she immediately identified as Pete’s buttons falling off again and again.  We chatted about possible solutions to the problem, which involved adding some glue to the backs of the buttons, wearing a shirt without any buttons at all, or sewing the buttons on more tightly – all pretty decent suggestions.  With that, we got started with our button sewing activity.  While we’ve worked on some very beginner sewing skills with our toddler sewing station, this was the first time Miss G had actually tried sewing in and out of fabric, so I knew I wanted to set her up for success.  To get started, we collected a large embroidery hoop, some burlap fabric (labelled ‘sack fabric’ here in Kuwait, a blunt embroidery needle, some embroidery floss, a bowl of large buttons, and a pair of scissors. 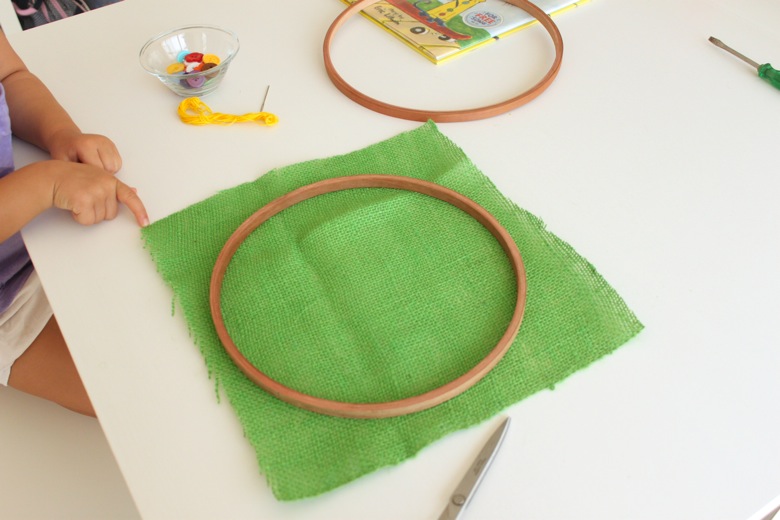 The idea of using burlap came from the brilliant Babble Dabble Do who recently shared her burlap embroidery for kids, and I have to say that I think it’s a perfect material for beginner sewers to work with.  We simply placed a piece between our two hoops, fit them back together and tightened them up, and we were good to go. 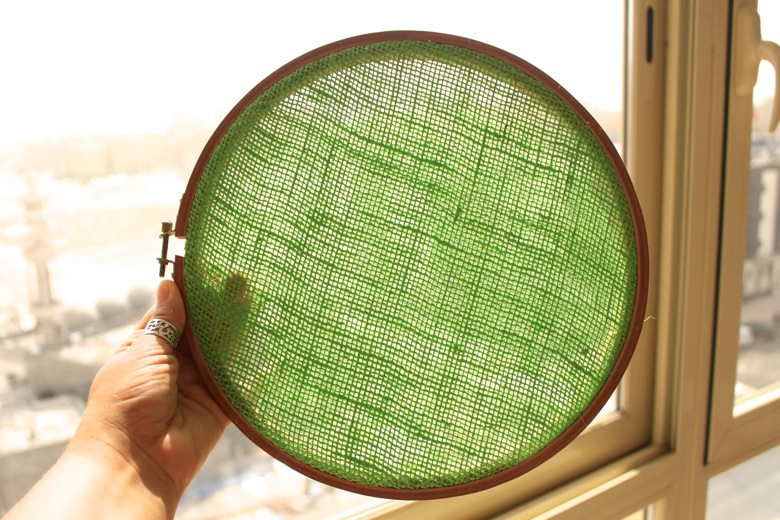 Here’s a look at our hoop once I’d trimmed off the excess fabric…  The coloured burlap I found at our local book / craft supply store here in Kuwait was particularly loosely weaved, which is great when you’re learning to sew buttons. 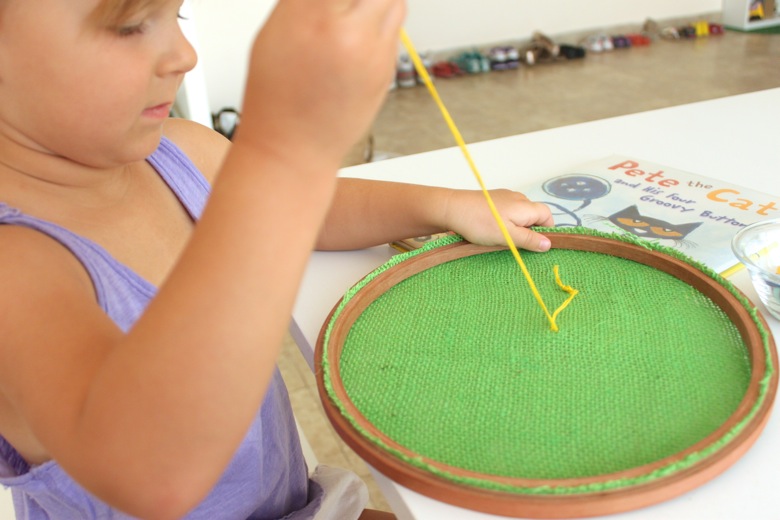 I asked Gracen if she’d like me to show her how to sew buttons onto fabric, or if she would like to just experiment on her own, and she decided she’d like a demo first.  After threading our needle and tying a large knot at the bottom of the floss, I showed her how we could poke the needle through the fabric from the back, attach our button through one hole, sew through the other hole, and then flip the hoop over so we could pull the thread tight.  Before I’d finished my demonstration, she’d taken over and was happily sewing. 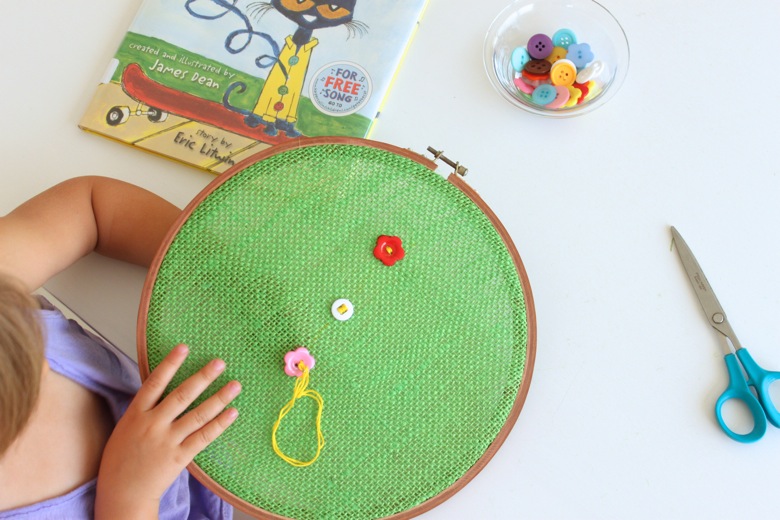 At first, she wanted our hoop to look just like Pete’s shirt – with four buttons running right down the centre, so that’s what she worked on. 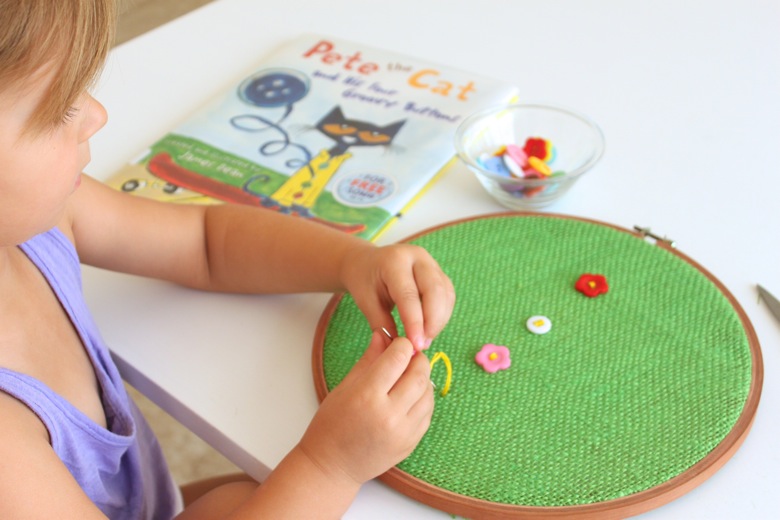 I sat nearby reminding her to sew back through the button instead of around the edge of the embroidery hoop every once and a while, but she did everything on her own other than that. 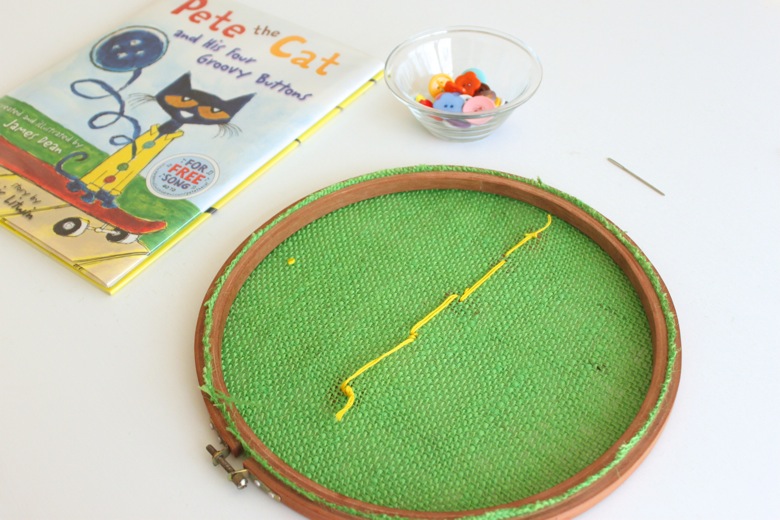 We didn’t bother to tie off our thread in between buttons, she simply finished with one and moved onto the next.  Of course, just 4 buttons wasn’t enough, so on she went. 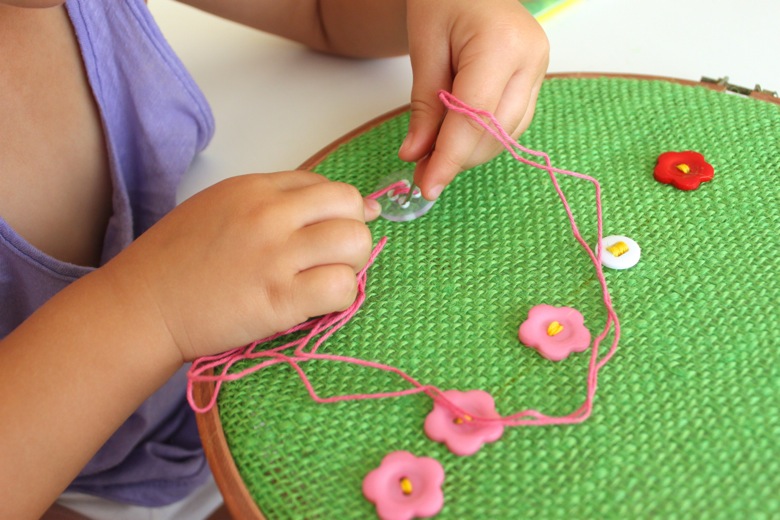 This meant that starting with a long strand of thread was beneficial as it allowed her to sew on several buttons at a time, but I did wonder if the long thread might be too much to manage.  We gave it a shot and she actually managed it just fine.  She was so focused on sewing the buttons on nice and tight {so they wouldn’t fall off like Pete’s did} that she made sure to pull the thread all the way through each time, which was perfect. 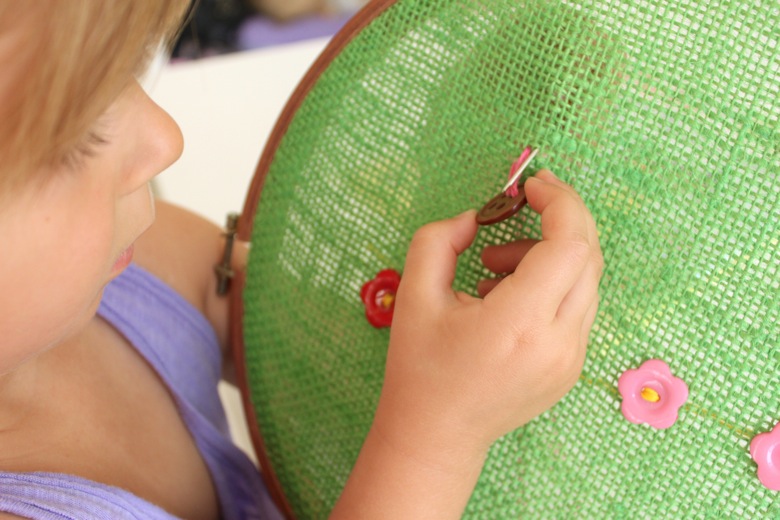 The other thing I thought might be tricky was feeding her needle from the back of the hoop through the button holes, but G was determined and made it very clear that she did not need any help.  Turns out that because you can see fairly well through the burlap, it wasn’t too tricky after all.  Miss Independent did it on her own every time. 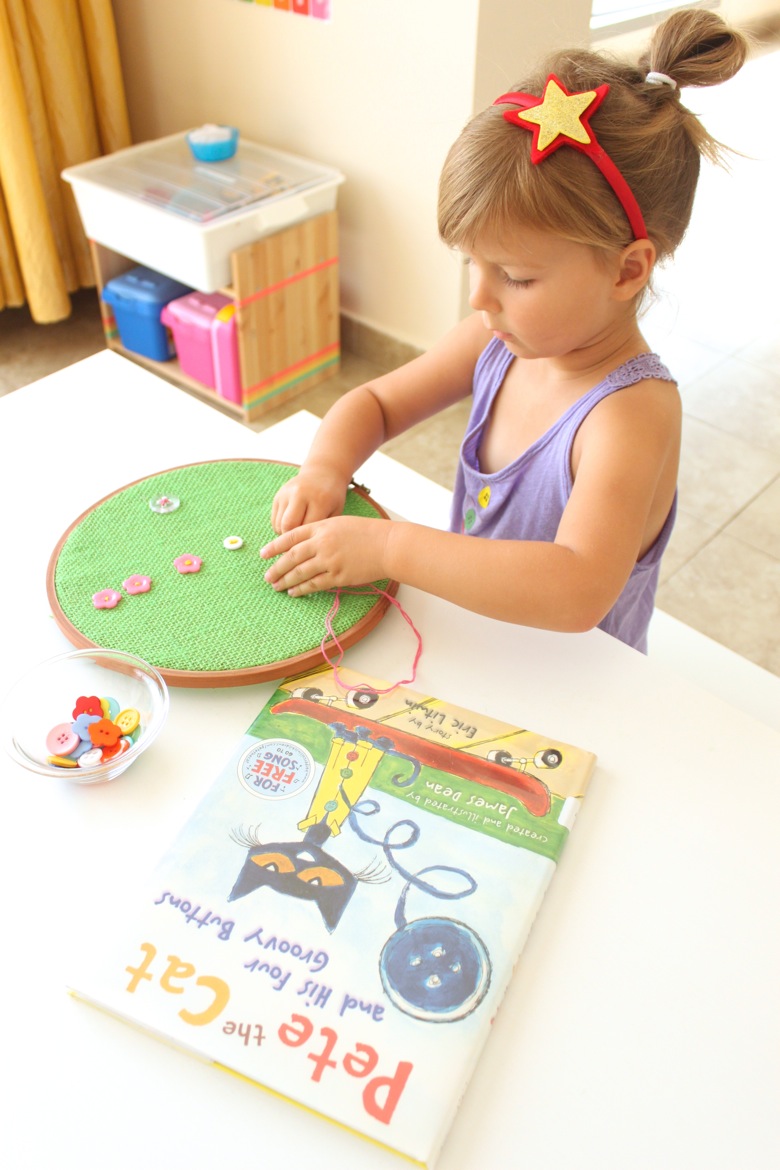 Grae added button after button, giving those fine motor skills an awesome workout in the process. 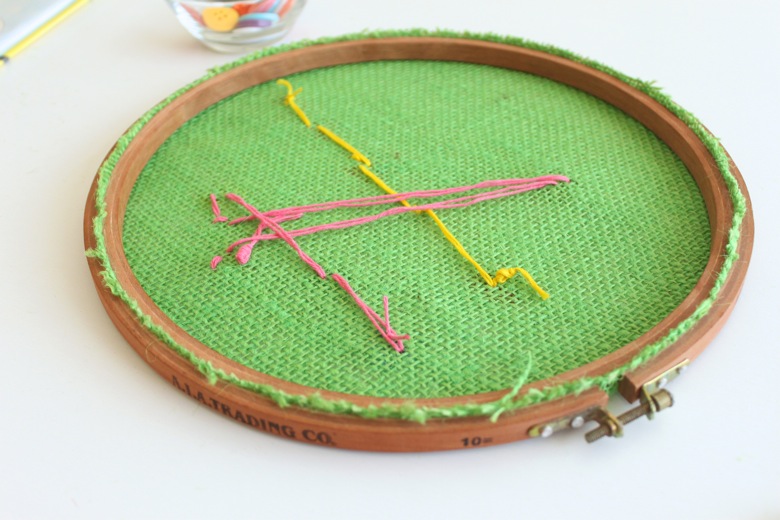 And when she eventually ran out of thread, we’d simply tie it off and start with a new length. 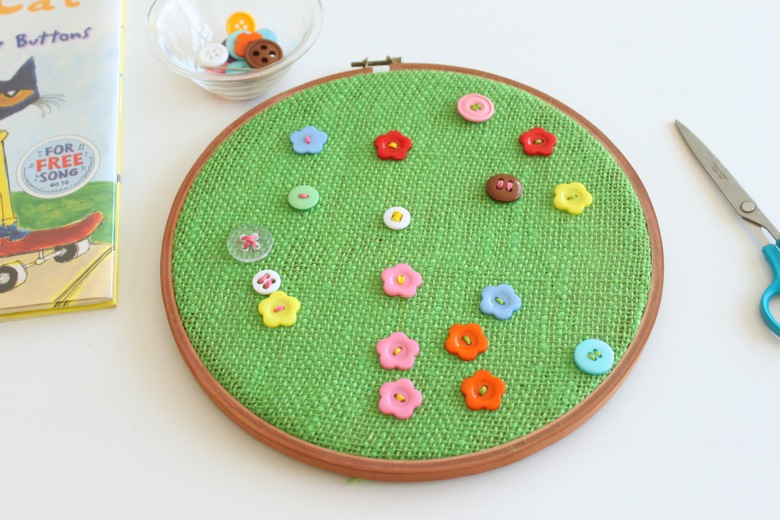 This is the project in its current state, but it’s not been deemed complete yet…  The plan?  More buttons of course!  And when it is complete?  I think it’ll make a beautiful piece of art for Grae’s bedroom wall.  Fun, right?

The best part about this project, however, is that it’s part of a Preschool Book Club Miss G and I are taking part in with a bunch of awesome blogging families.  Check out other activities you can do with Pete the Cat and His Four Groovy Buttons by clicking on the links below.

11 thoughts on “Pete the Cat and His Four Groovy Buttons: A Sewing Activity”