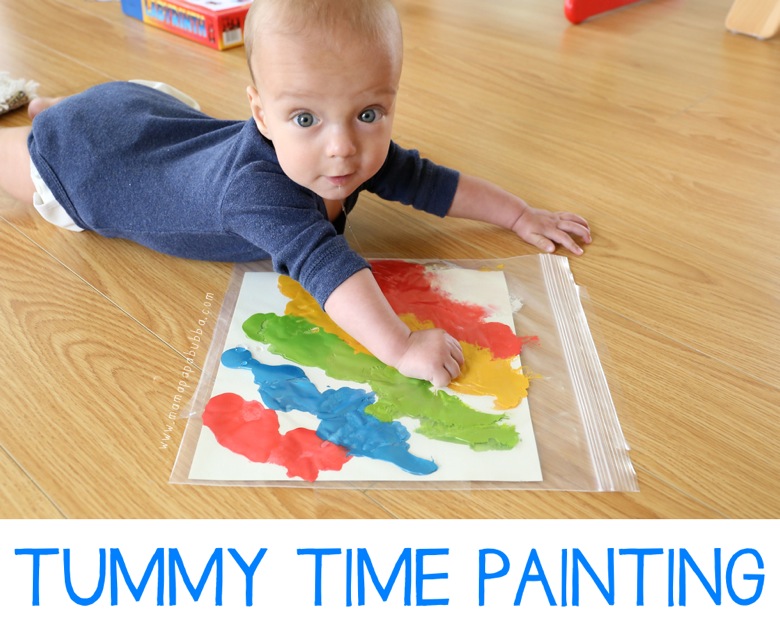 This little bub.  Gosh, he melts my heart.  At 8 months old {and 5 months corrected} now, we’re working hard on building his strength and motor skills and he’s already come so far!  According to his physiotherapist, the number one thing we can do at this point to help his development along is tummy time.  I’m absolutely not a professional, but according to her, it’s sort of ‘the gateway’ to many of the other skills he’ll be working on mastering in the upcoming months.

Now while there are many people, proponents of RIE {a parenting philosophy that I quite adore} included, who advocate for babies moving and developing naturally without being placed into positions they can’t get out of on their own, I do think it’s a different situation in the case of our little Sam.  While he’s doing amazingly well for being born at 27 weeks gestation, it’s likely that he wouldn’t be nearly as far along as he is without some of the early intervention he’s had so far.  And so, tummy time it is.  The key for us is making sure that the time he spends on his tummy is happy and positive, despite the ultimate goal of slowly expanding the amount of time he’s able to spend in the position.  When he’s tired or frustrated, we’re done.  Simple as that.

The good news is that since figuring out rolling a while back, this guy is constantly on his tummy.  We make sure to get down on our tummies and chat and play with him on the floor, but today, with Big Sister at bike camp and Papa out for the afternoon, I decided we’d try something new – a little tummy time painting. ☺

While it’s not at all a new idea {Allison from No Time for Flashcards shared her no mess colour mixers post back in 2008 and MaryAnne of Mama Smiles shared her no mess finger paint post in 2010}, mess-free painting was something Miss G and I did as a table top activity when she was wee, so it was fun to try a new version this time around. 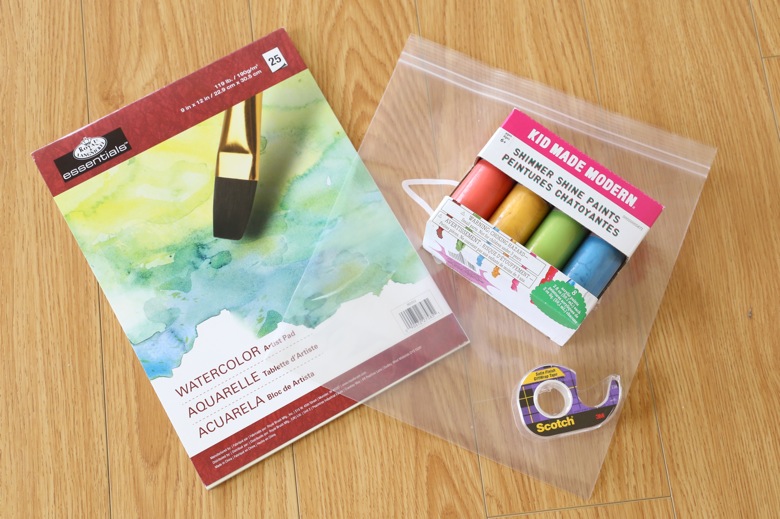 First up, what we used…  Some watercolour paper, some paint {while not affordable on Amazon, these shimmer shine paints from Kid Made Modern are oh so pretty!}, a large zip-close bag, and some tape.  {I personally would have used a thick painter’s tape had I had it, but clear sticky tape worked just fine too.} 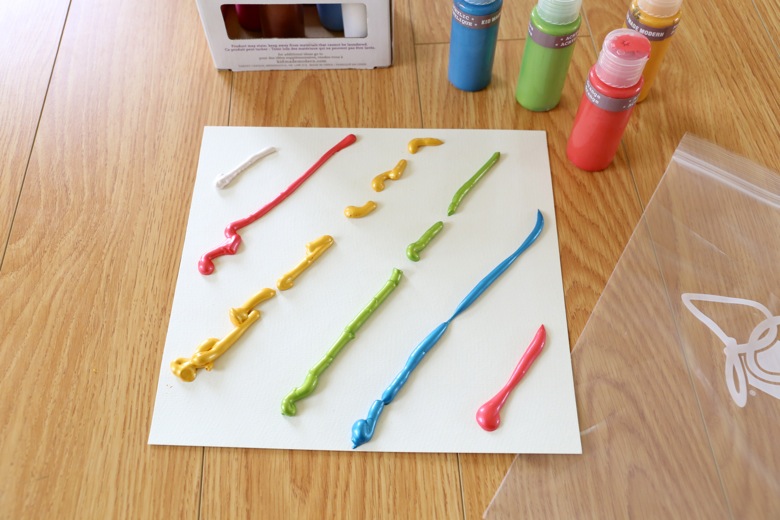 After cutting a piece of watercolour paper to fit inside our zip-close bag, I squirted some paint directly onto the page. 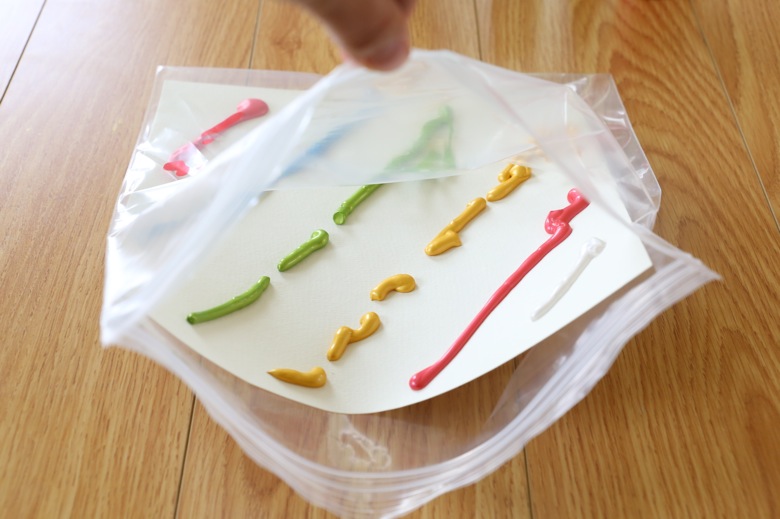 Then I carefully slipped it inside the bag, trying not to smudge the paint along the way {not that it would have been a big deal if I did}. 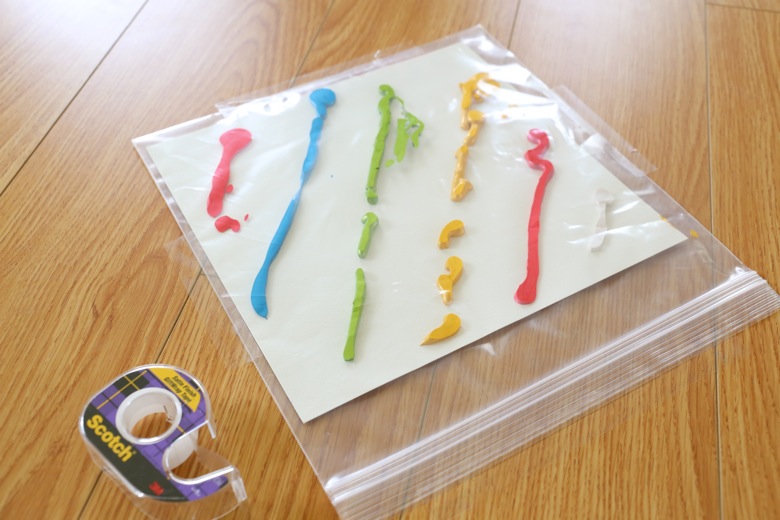 Then I zipped the bag shut and taped it directly to our wood floor. 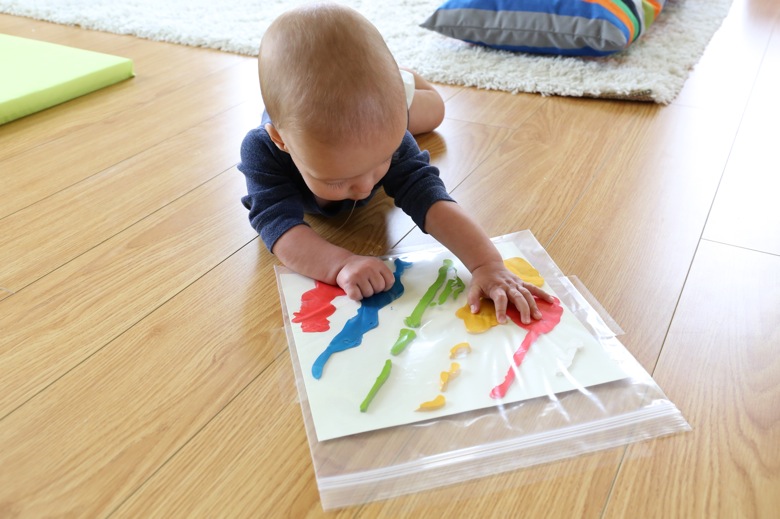 With our mess-free painting bag ready, I brought Sam over and placed him on his back right below the bag, knowing that he’d automatically flip over and have a fun surprise waiting for him. 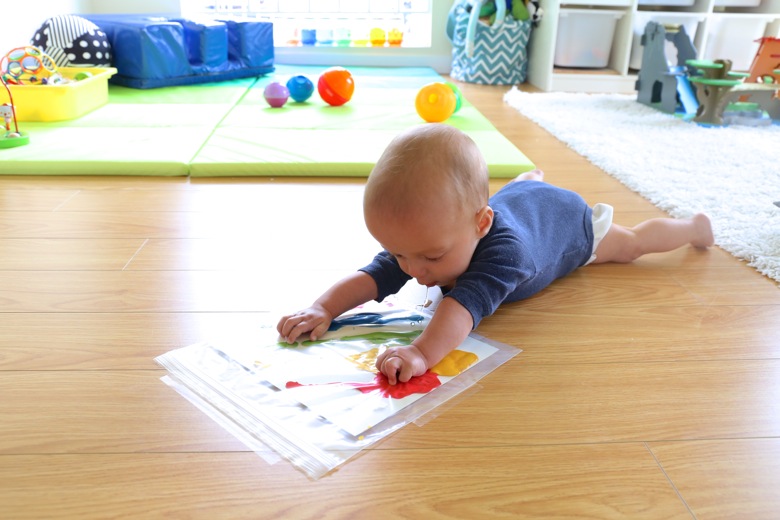 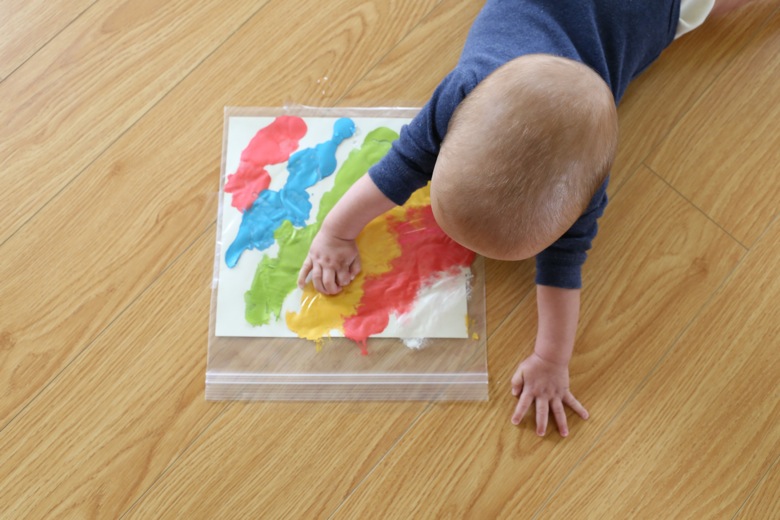 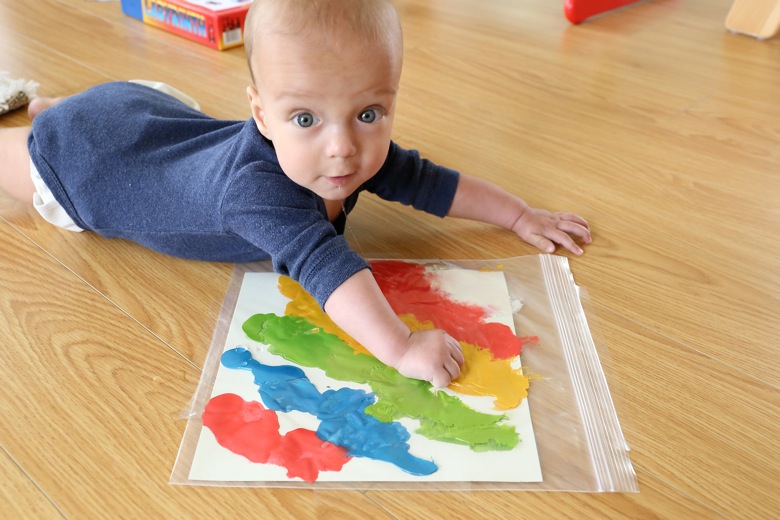 I wasn’t sure what he’d think, but he was actually quite interested in it and began smushing his little hands over it right away. 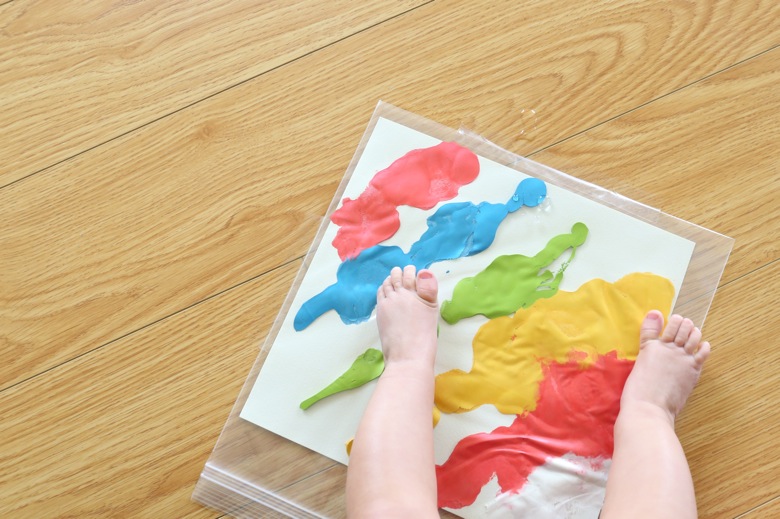 The smearing didn’t happen nearly as quickly as it does when doing this activity with a toddler, so we took a little break part way through and did some foot painting too. ☺  While not planned, this part of the activity was actually perfect for our Sam.  After spending the first 69 days of his life in the NICU and having constant blood draws from his little heels, he’s not crazy about having pressure on the bottoms of his feet {unless it’s in the form of kisses!}, so it’s something we’ve been easing him into. 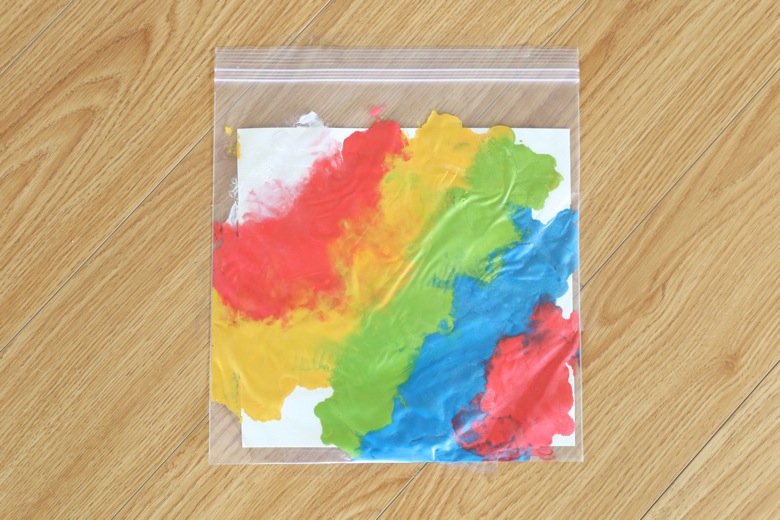 When he was no longer into it, that was it. 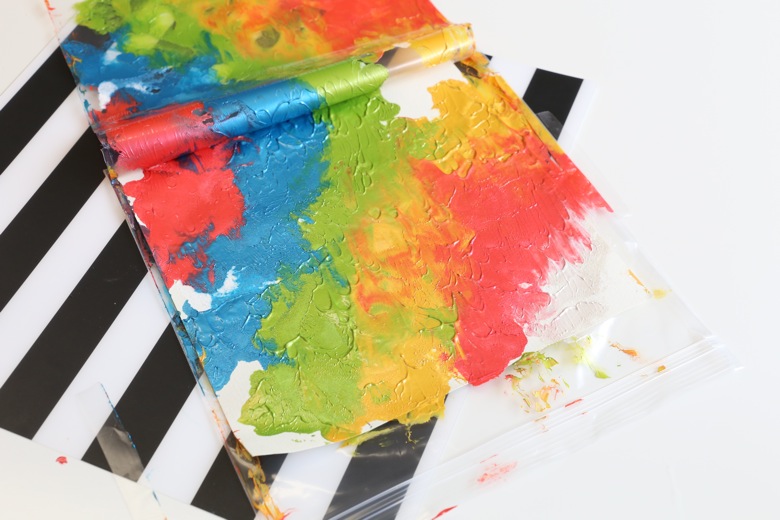 I carefully cut open the sides of the bag so as not to muck up his creation, and lifted it out so it could dry. 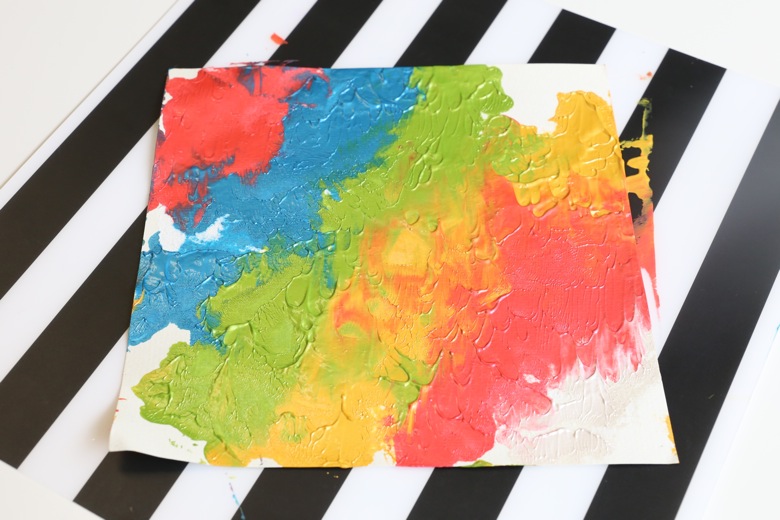 And while the purpose of our tummy time painting was the process itself, the end result is baby’s very first painting!  {Which is most certainly being framed and hung on his nursery wall. ☺}