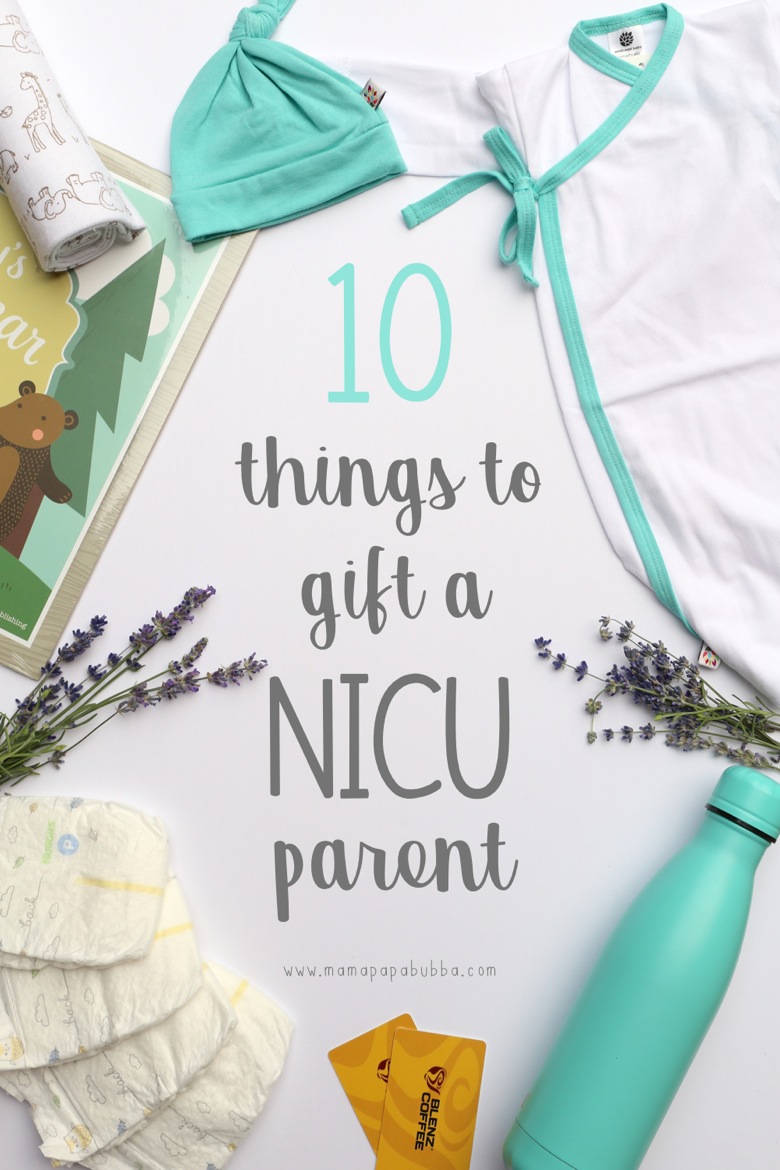 One of the things I get asked about a lot is what to gift parents with littles in the NICU.  I absolutely love being asked and I always hope my answers are helpful, but it’s important to keep in mind is that every baby’s {and therefore parents’} NICU journey is different and I can really own speak to my own.  Our Sam was born very early (during the 27th week of my pregnancy), but not because of one of the usual pre-term labour suspects – because my appendix burst and my body knew it was no longer a safe place to grow a baby.  He was quite big at birth for his gestational age (2 pounds 12 ounces) and compared to some of his NICU buds, Sam had it relatively easy…  He was intubated for his first night only, none of his head ultrasounds detected a brain bleed, the little open valve in his heart was able to be solved medically and not require surgery, he passed all of his initial hearing and ROP tests, and his only big necessary medical intervention was surgery for a double inguinal hernias a short while after we left the NICU.  We had it good. 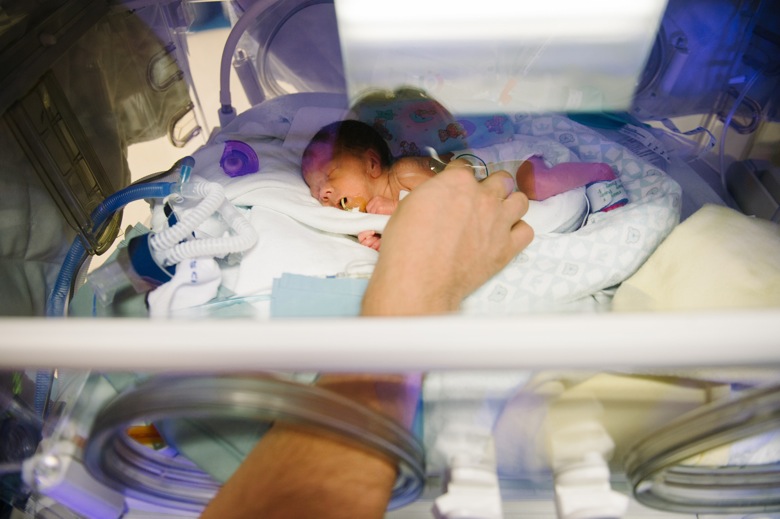 But the thing is, having to go home and leave your baby in the NICU, no matter what the circumstances, is awful.  Like really, really awful.

Thankfully, we had an entire village of family and friends who jumped in, took over where needed, and helped us make it through.  On top of that, we were given the most thoughtful and wonderful gifts that without a doubt, made an extremely difficult time easier.

Here are 10 things to gift a NICU parent…

1. A cafe gift card – because when you have a baby in the NICU, you basically live at the hospital, and that means you also have to eat there.  Scope out the cafes located inside the hospital, as well as bakeries and bistros within walking distance, and pick-up a gift card to one of them.  Grabbing a sandwich and a great cup of coffee or tea outside of the cafeteria is a nice treat as a NICU parent.

2.  A preemie sized sleeper or outfit – because finally getting to dress your baby feels oh so good when the time comes.  It’s one of those things…  You wouldn’t think twice about it usually, but when you have a bub who is connected to a million lines and wires and tubes for the first part of his life, being able to put a cozy little outfit on him is something to celebrate.  Just sure to pick out something that buttons or snaps up and isn’t footed so that there’s easy pathways for remaining lines and sensors.

3. Something with the baby’s name on it – because being a NICU parent is terrifying and being gifted something with his or her name on it somehow solidifies the fact that he or she is real to others too, no matter what the future may hold.  Think wooden blocks that spell baby’s name, a monogrammed blanket, or a piece of personalized art for baby’s nursery.  A dainty necklace or bracelet that spells baby’s name would also be a lovely gift for a NICU mama as she’d always have a little piece of her babe with her, even when away from the hospital.

4. Groceries – because grocery shopping when you have a baby in the hospital is the absolute last thing on your mind but you do still have to eat. Grab a bunch of basics – things like fresh bread, fruits and veggies, eggs, pasta, and whatever else you know your friends enjoy – and drop them off at the house when you know someone will be home or leave them on the porch in a cooler filled with ice blocks.  Coming home to fresh groceries is the best surprise after a long day in the NICU.

5. Meals – because the only thing better than someone dropping off groceries is someone dropping off a ready-to-serve meal!  This is especially helpful when the NICU parents have other kiddos at home and splitting their time between two places is already a huge challenge.  Meals that are prepped and ready to go mean more time to spend with the munchkin(s) at home and less time spent cooking. Things that keep well and can potentially be popped into the freezer are especially great.

6. Grab and go snacks – because NICU parents are almost always rushing off one way or another and being able to grab something yummy and reasonably nutritious as you run out the door is a dream!  Think things like muffins, energy bites, trail mix… even little bags of washed and chopped fruits and veggies are awesome!

7.  A parking pass – because you need them and they’re not cheap!  Now it depends on the parking situation at the particular hospital, but many offer weekly and monthly passes that you can purchase to display in your window and having this taken care of by someone else is a lovely treat for a NICU parent.  Along the same lines, gas station gift cards are also really helpful if the parents are travelling a ways between the hospital and home.

8.  Muslin swaddle blankets – because having a NICU babe means loads of skin-to-skin time, pumping, and working on breastfeeding with very little privacy.  They’re super lightweight and soft, which makes them perfect for covering or cozying up and they’re fantastic for comforting mama and babe when apart.  Mom leaves one that smells like her with the baby while she’s away and she takes one that smells like her bubba home at night.  Smelling her baby while at home is also said to be great for milk production, so win-win!  When picking one out, he bigger the better in my opinion.

9.  Immune boosters – {especially during cold and flu season} because no NICU parent can afford to get sick!  Being sick means that you’re not allowed in the NICU and not being allowed in the NICU means you’re not able to see your baby, so if there’s something a NICU parent can take to boost his or her immune system, my guess is they’ll take it!  Think vitamins, essential oils, smoothie boosters, fresh pressed juices, and any other magical product that will prevent them from getting sick.

10.  Basics for when baby comes home – because in many cases, NICU parents haven’t yet finished preparing for baby’s arrival when he or she comes and there’s not a whole lot of time to do so.  Stock them up on consumables like herbal baby balm, the gentlest baby wash, natural, completely unscented wipes, teeny tiny diapers that will actually fit their babe {we used Huggies Little Snugglers both in the NICU and once we got home because they make both preemie and newborn sized diapers that are not only tiny, but super soft and have the little umbilical cord cut-out too}, and anything else you think they might need.  Hoping to gift them something a little more ‘significant’?  If so, an air purifier is a great investment for a NICU baby’s nursery, as is a sound machine of some sort {as NICU babes are used to noise}. 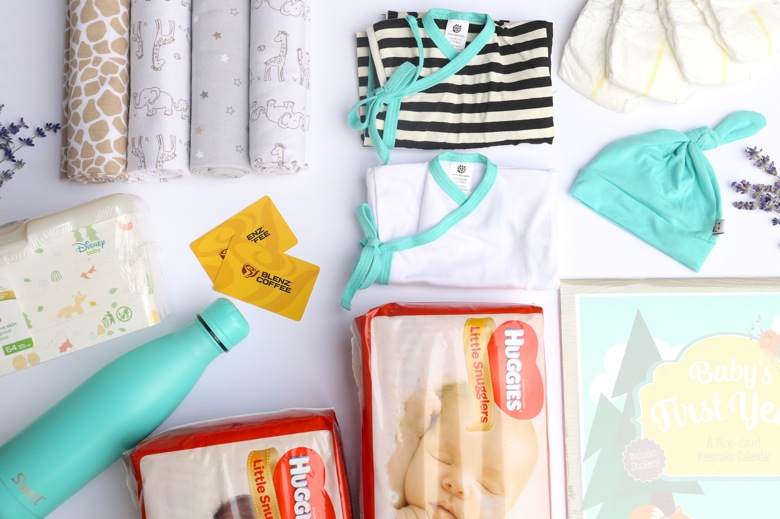 Now if you’re not a NICU parent, you may not know about all of the good Huggies does for some of our most vulnerable little bubbas…  Here in Canada they fund a volunteer cuddling program called No Baby Unhugged, which means that specially trained volunteers are available to hug and hold your baby if you’re not able to be at the hospital {should that be what you want of course}.  They also make hospital exclusive diapers in nano preemie and micro preemie sizes for the teeniest, most sensitive babies {I still have a few tucked away from Sam’s stay and my gosh – they’re the tiniest things}, as well as extra sensitive wipes  specifically developed for premature baby skin.  That being said, in honour of Neonatal Intensive Care Awareness Month, with the help of Huggies, I’ve curated a little selection of gifts to give one very deserving NICU family in hopes of brightening their stay, if only a tiny bit. All of the gifts are items I loved having while Sam was in the NICU and they’re all items I continued to use and love when we finally got to bring him home.

Here’s what I chose to include:

– 2 beautiful Westcoast Baby bamboo jersey knit kimonos for babes 5 to 9 pounds (quite possibly the softest thing you’ll ever touch and perfect for skin-to-skin time, x-rays, and wires, lines, and tubes)

– 1 beautiful Westcoast Baby bamboo beanie knot hat for babes 5 to 9 pounds (it coordinates with both kimonos no less!)

– a ‘Baby’s First Year’ non-dated keepsake calendar (a personal gift from me because without one of these, Sam would have zero memories written down)

This giveaway is open to all Canadian residents with a baby currently in the NICU excluding those in Quebec {so sorry, Quebec friends!} and because being a NICU parent is all consuming, please feel free to enter your friends or family members with a babe currently in the NICU.  Entering is easy – just use the Rafflecopter form below and we’ll pick a winner at 12:00 a.m. PST on September 21st, 2017.

This post is sponsored by Huggies.  All opinions are my own, of course!