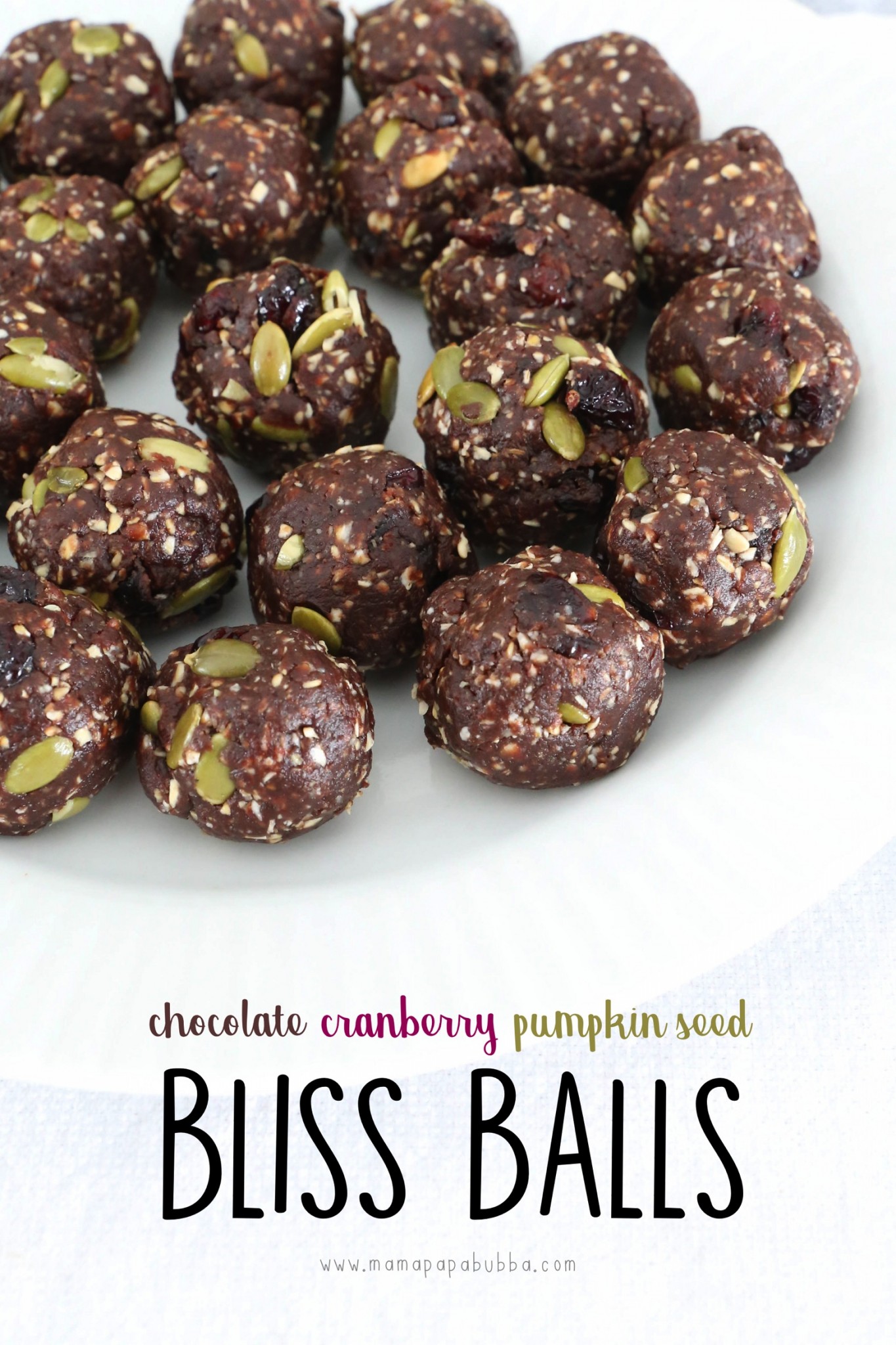 Bliss balls are a staple in our house.  In fact, I’m pretty sure I’ve made a batch a week for the last 4 years or so.  They’re easy to whip up, they’re usually quite nutrient dense, and they’re sweet and dessert-like at the same time. Plus they last well, they’re a hit at play dates, and they’re easy to pop in your purse or diaper bag for whenever a a little pick-me-up is needed.

Now because they’ve been on repeat for so long, I never use a recipe anymore…  I just chuck things into my food processor, add more wet or dry ingredients to make them the perfect consistency, and call it good.  And they always turn out delicious!  But after having a chocolate power ball at a local cafe, I knew we had to try and make something similar and I’m so glad we did because these chocolate cranberry pumpkin seed bliss balls are DELICIOUS. 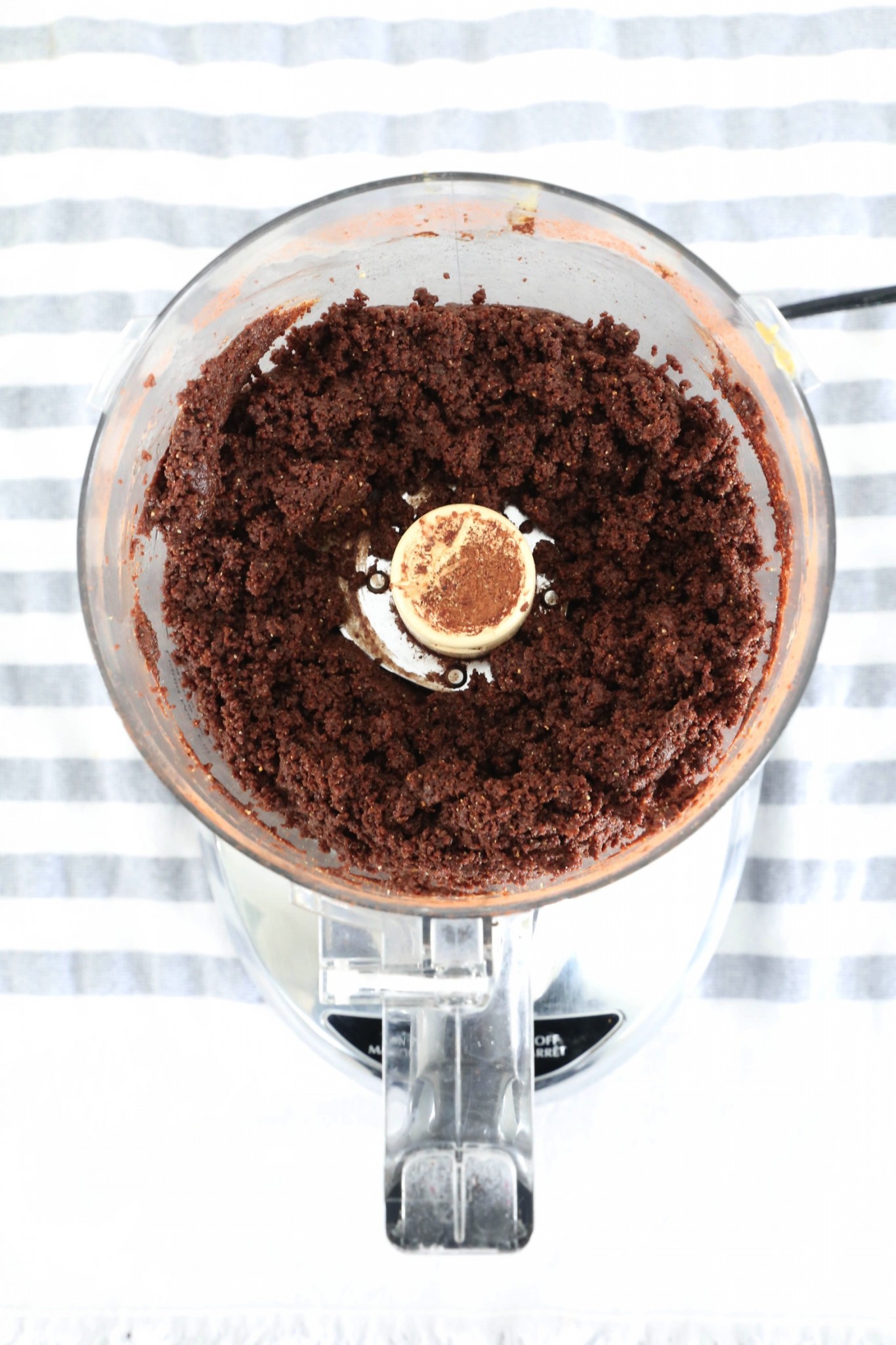 After several run throughs for recipe testing purposes, here’s what my littlest helper and I came up with…

First up, some peanut butter, honey {we used a local maple honey that is just incredible}, cocoa, pure maple syrup, good vanilla, hot water {just a little bit} in the food processor.  Now hear me out on the whole hot water thing because I know that sounds weird and probably slightly unappetizing…  Yes, you could use more peanut butter, honey, or pure maple syrup instead of water.  BUT – the added peanut butter makes the mixture even more peanut buttery (obviously), but to the point of it not really being a good thing.  {You know when you eat a teaspoon of peanut butter and it’s so thick that it’s hard to swallow?  Ya, that.}  And the added honey or maple syrup just makes it too sweet in my opinion.  But the water?  The water makes it come together perfectly without the mixture being at all watery or gross.  So hot water for the win is what I’m saying. 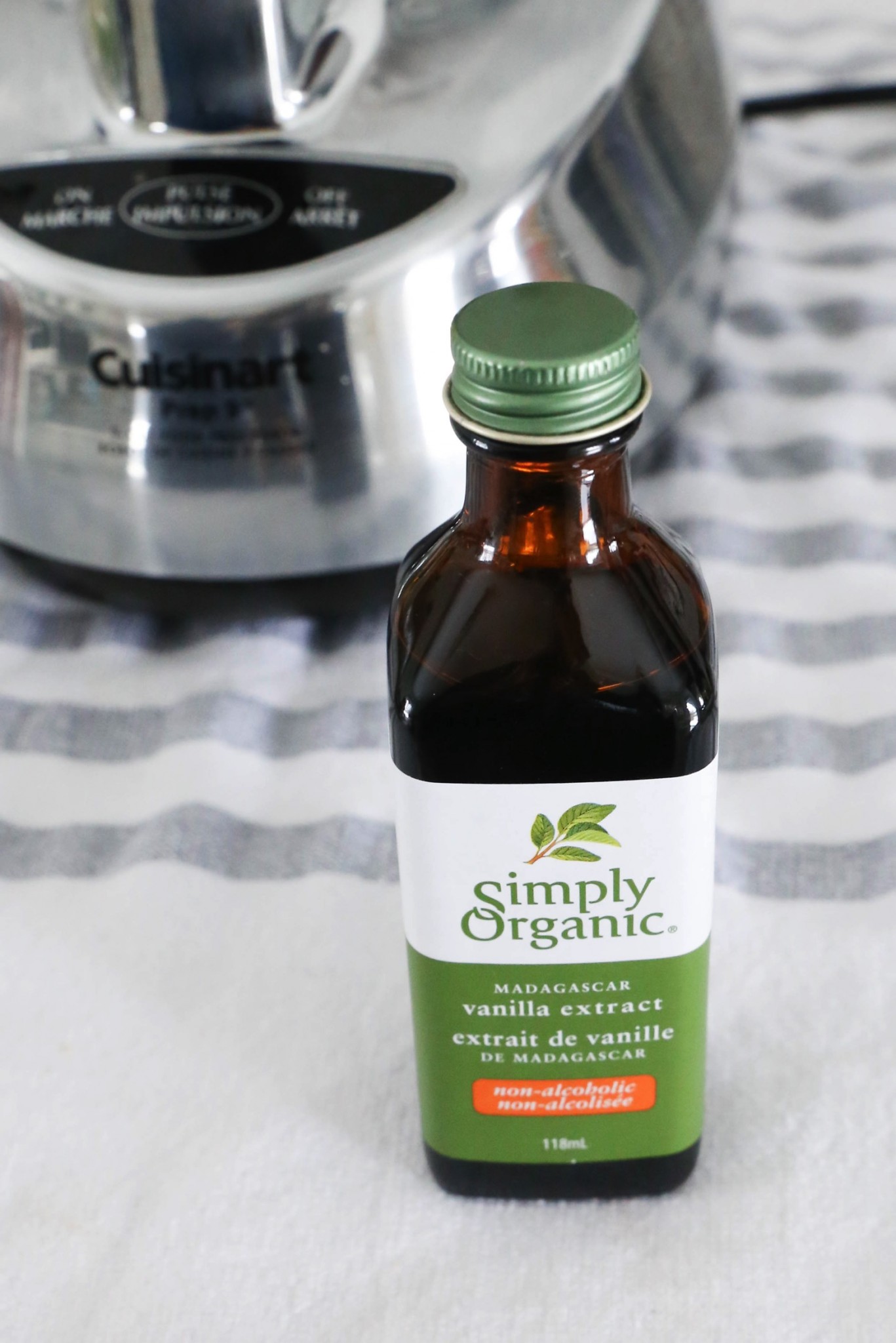 Now a note on the vanilla…  I’ve found in the past that alcohol-based vanillas (even the stuff you pay the big bucks for) sometimes makes bliss balls have a weird alcohol-y smell / flavour – probably because they’re not cooked.  So I prefer to avoid that.  This stuff {CAN} though?  It’s non-alcoholic and it tastes and smells AMAZING.  Highly recommend for no-cook recipes. 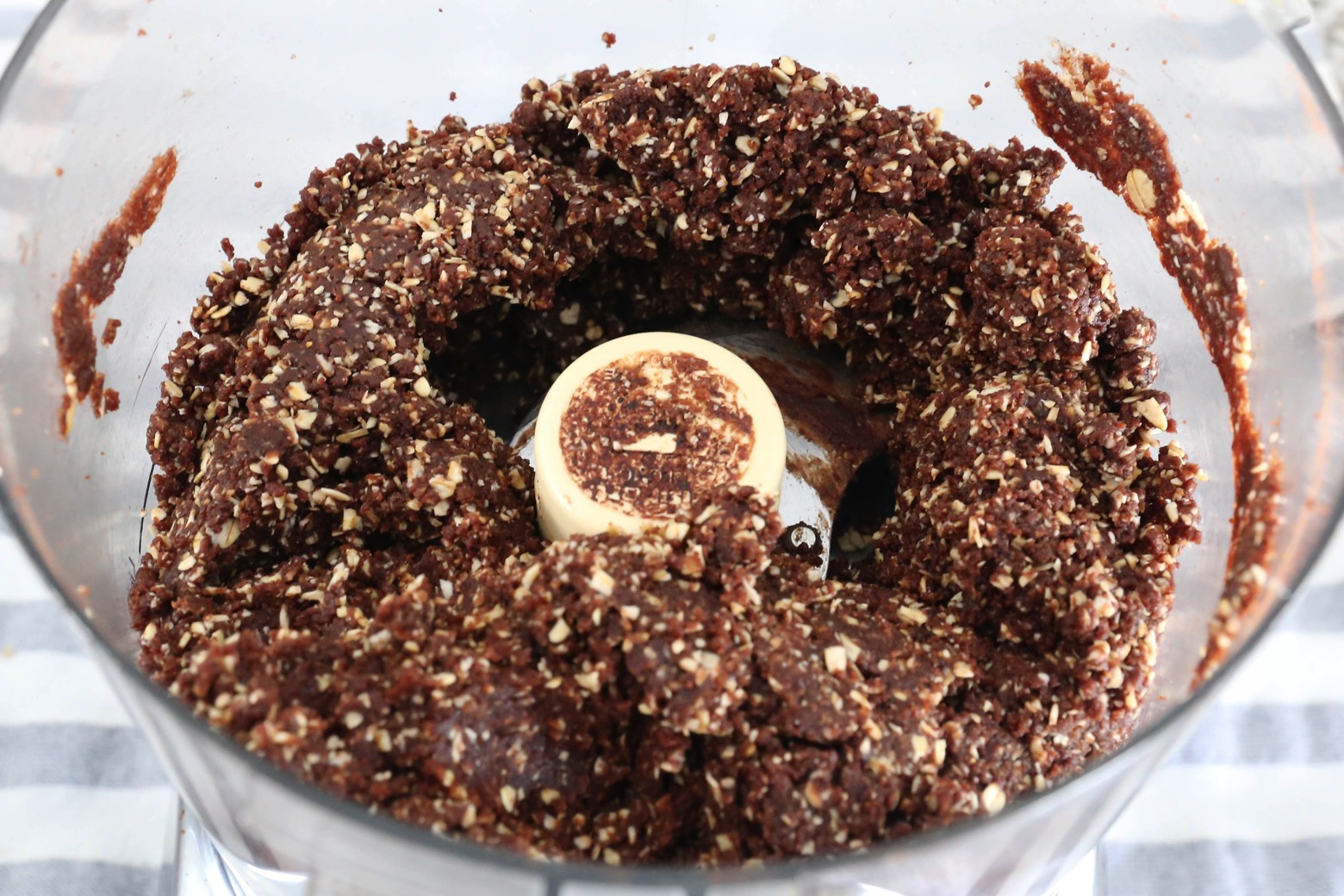 Next up, add in a bunch of old-fashioned oats and process or pulse until the mixture starts coming together {and not for long after that point – some texture is a good thing!} 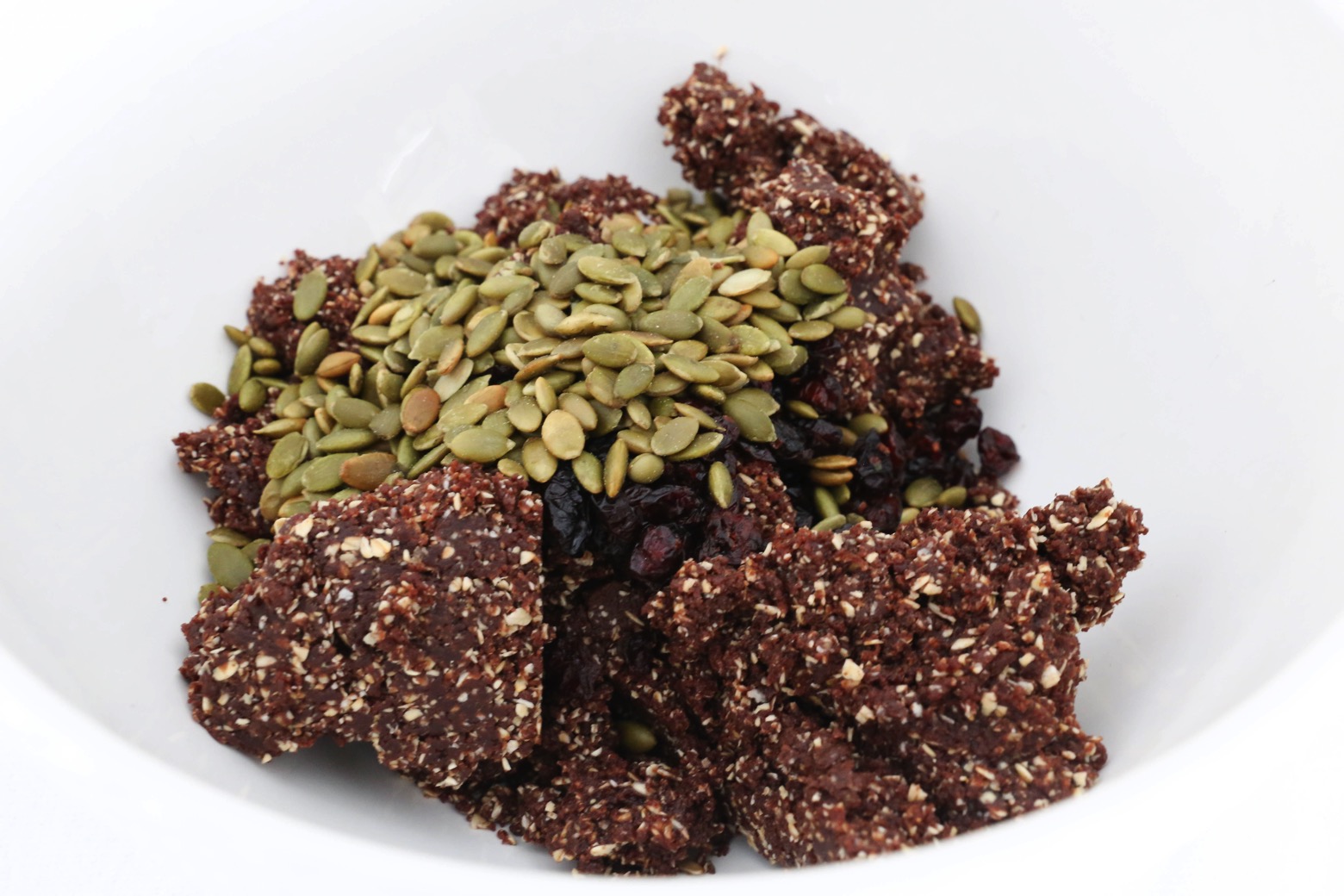 Then stir in some pepitas {or pumpkin seeds} and some fruit juice sweetened cranberries {CAN}. 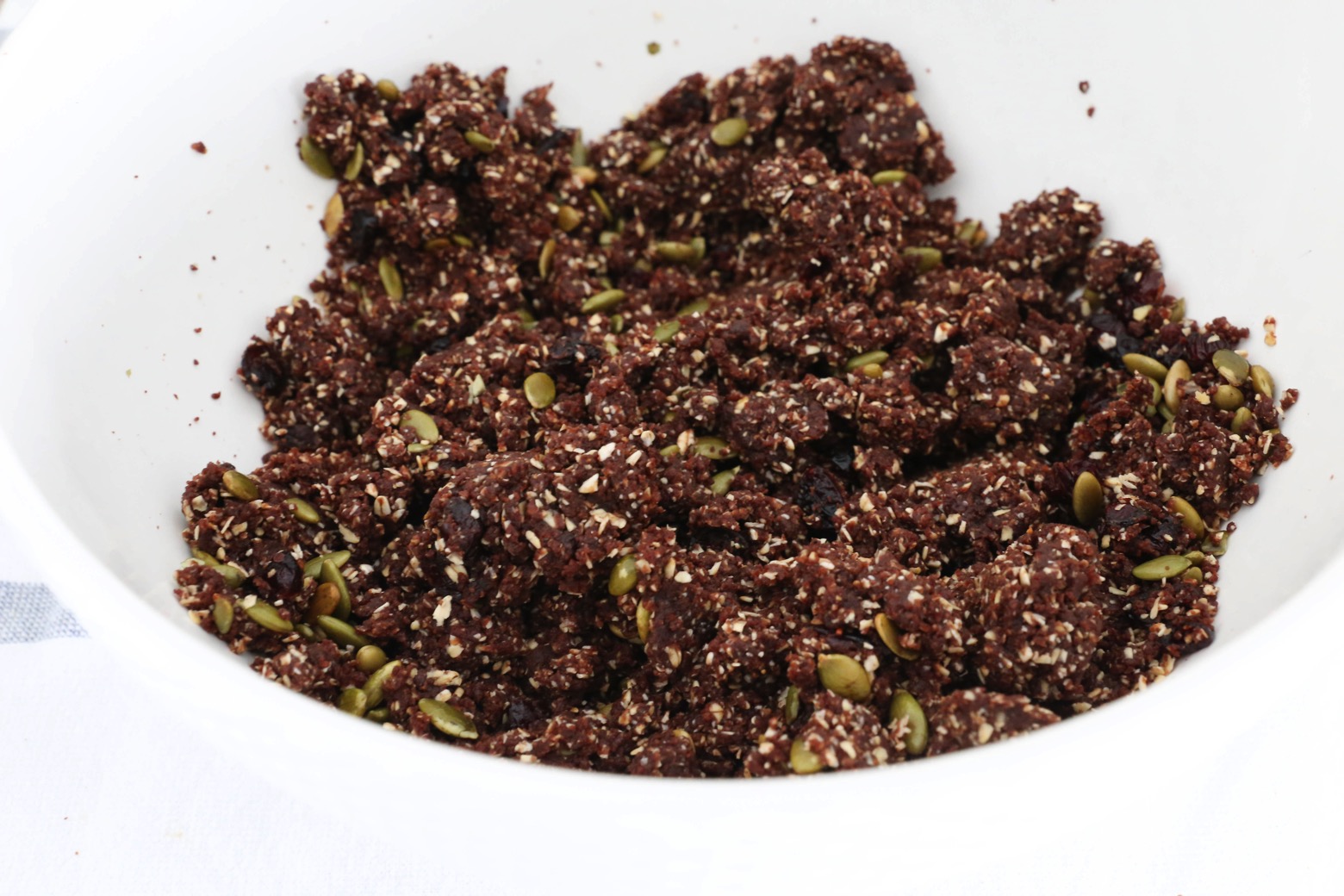 And ta-da!  Your bliss ball mixture is done! 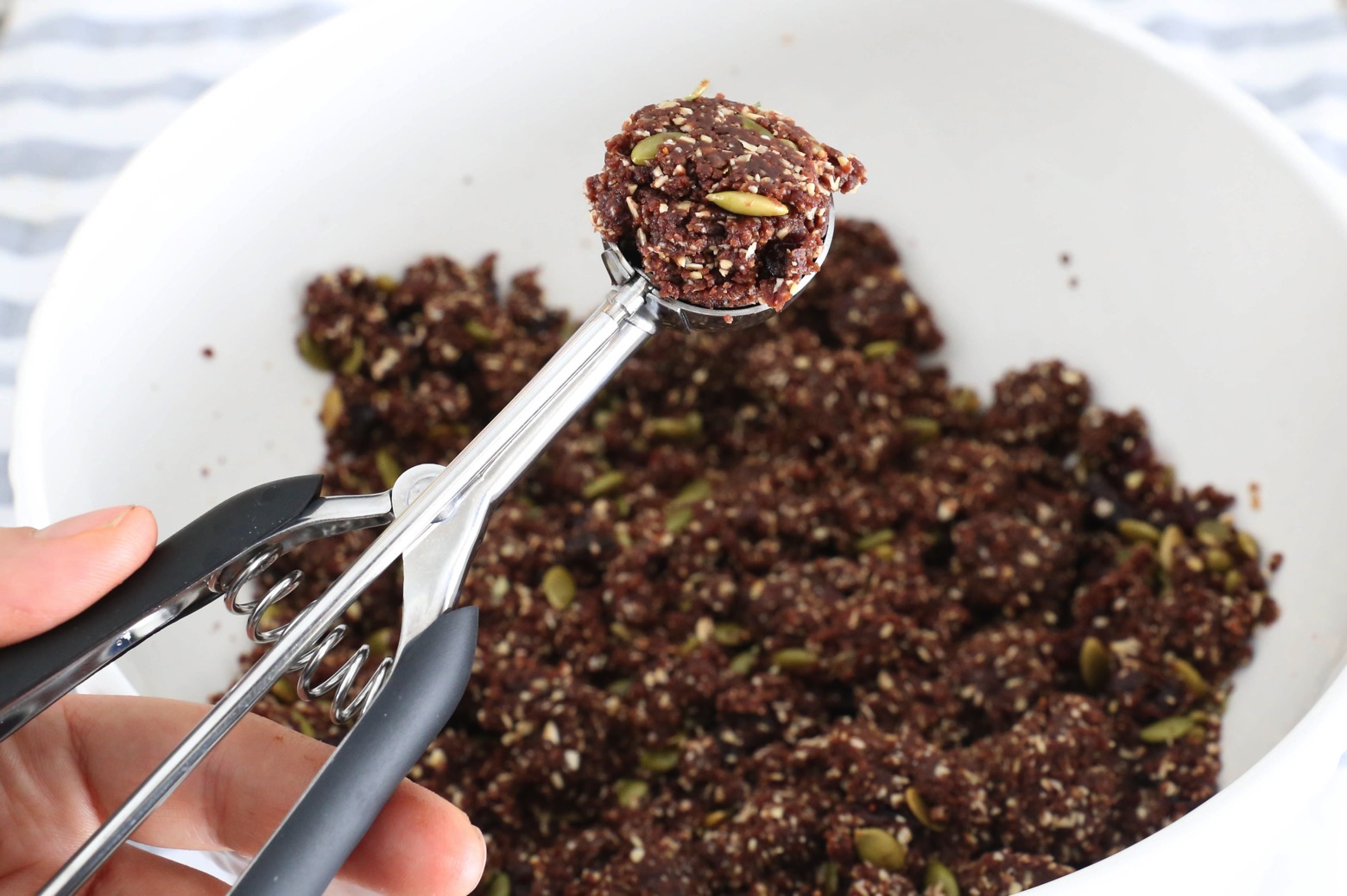 I love using this handy dandy little cookie scoop {CAN} when forming the balls, but if you don’t have one, a tablespoon measure works perfectly too. 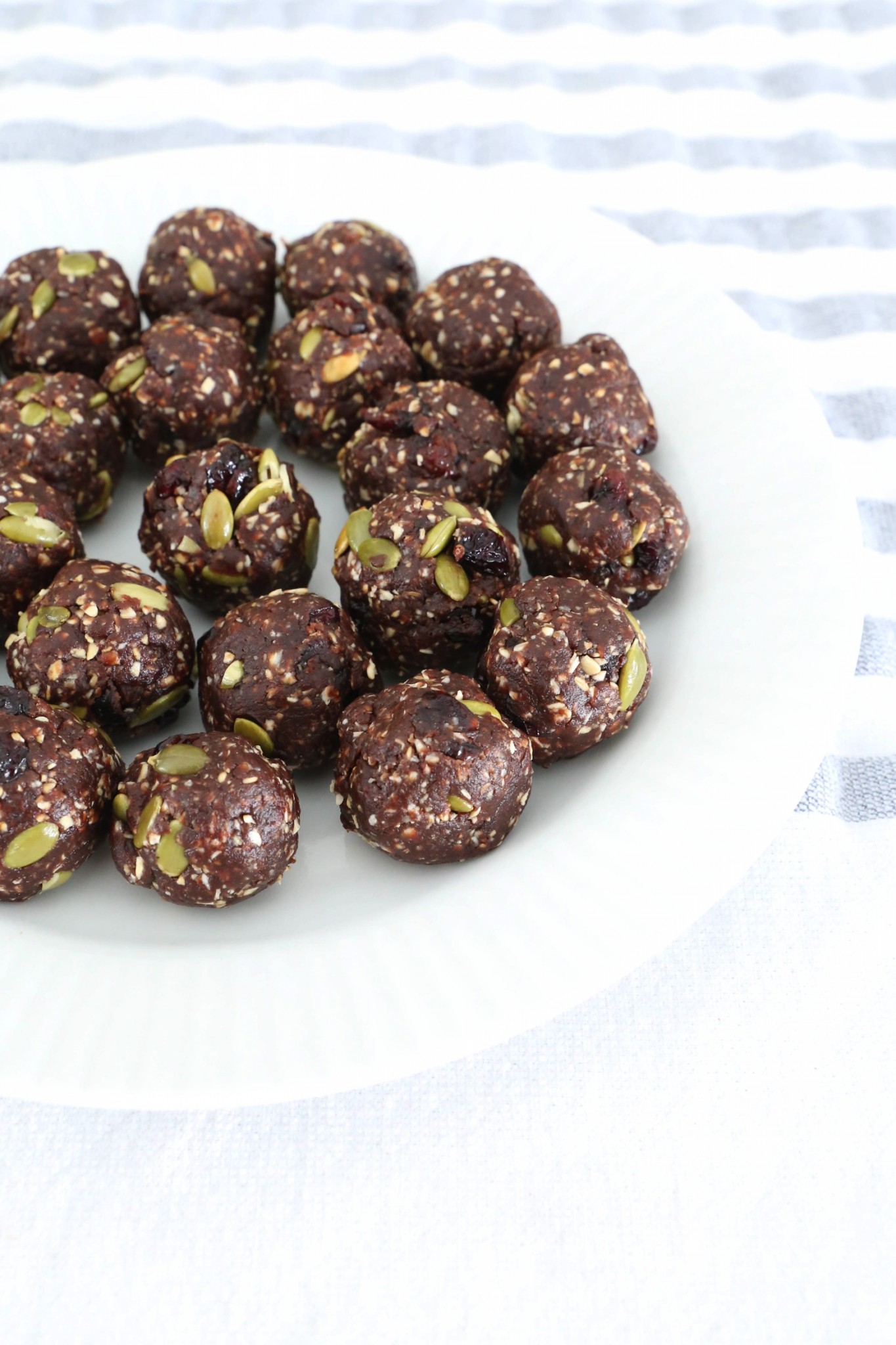 Then when you have your chunk of mixture in your hand, give it a few really good squeezes before gently rolling it into a ball between your palms. 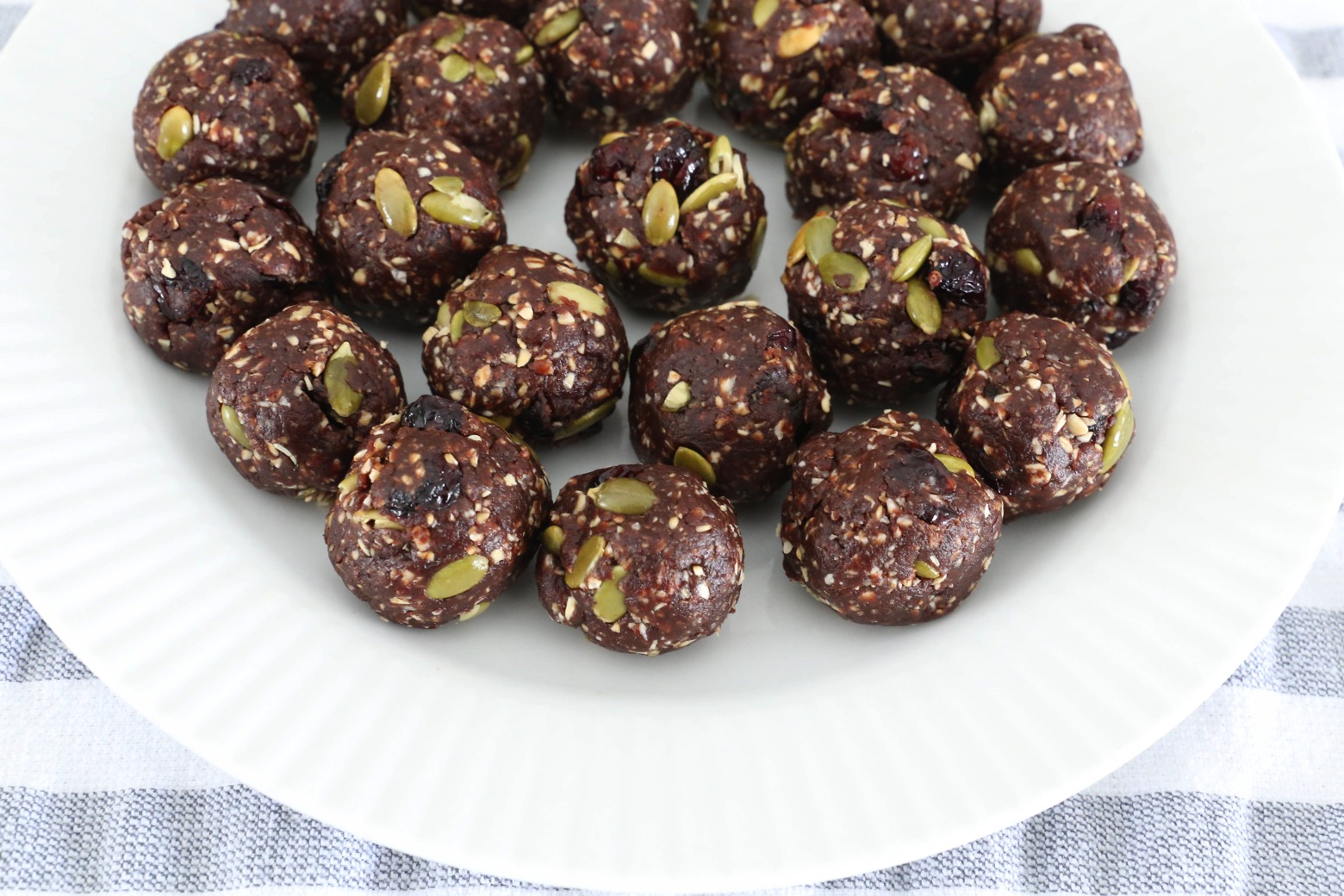 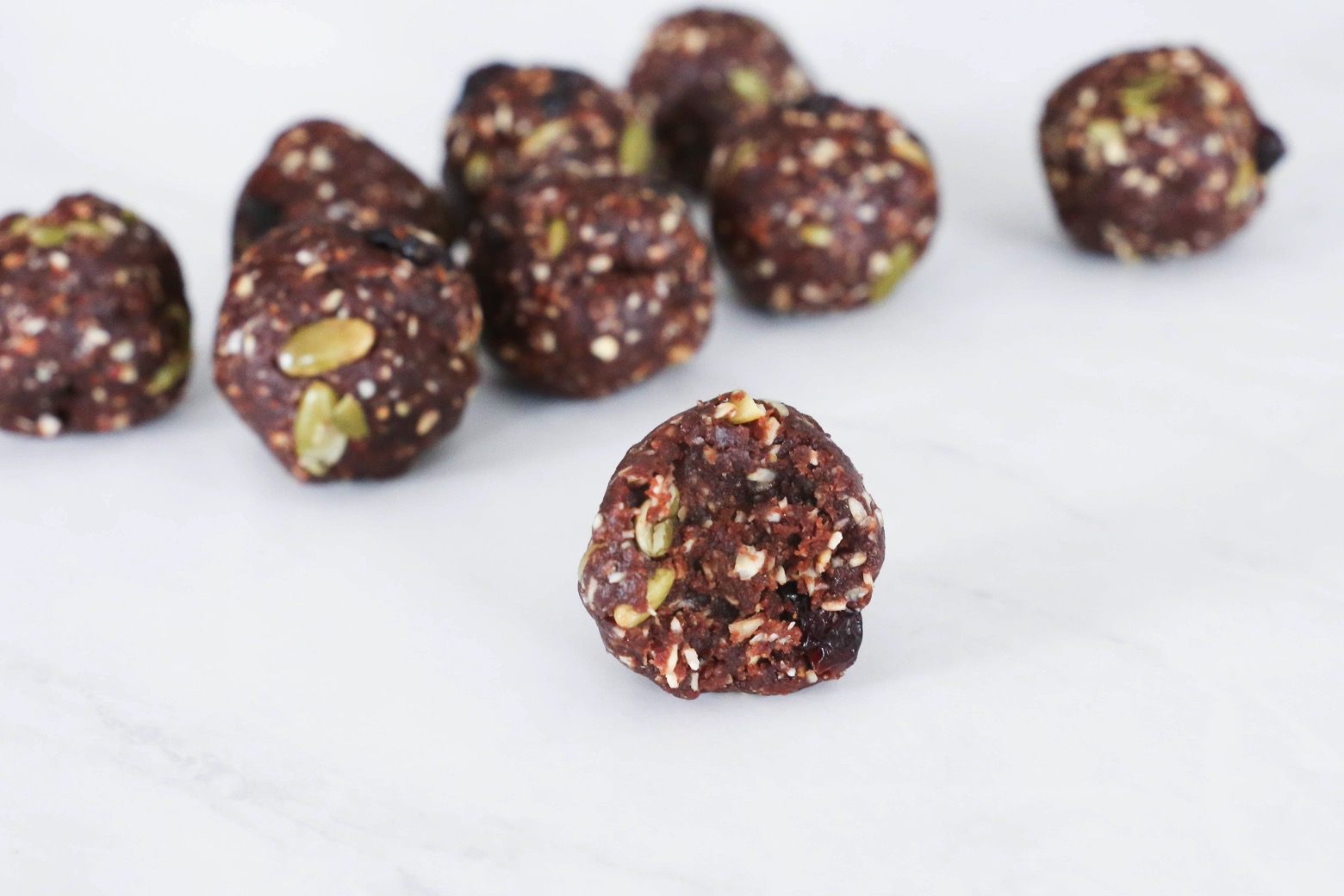 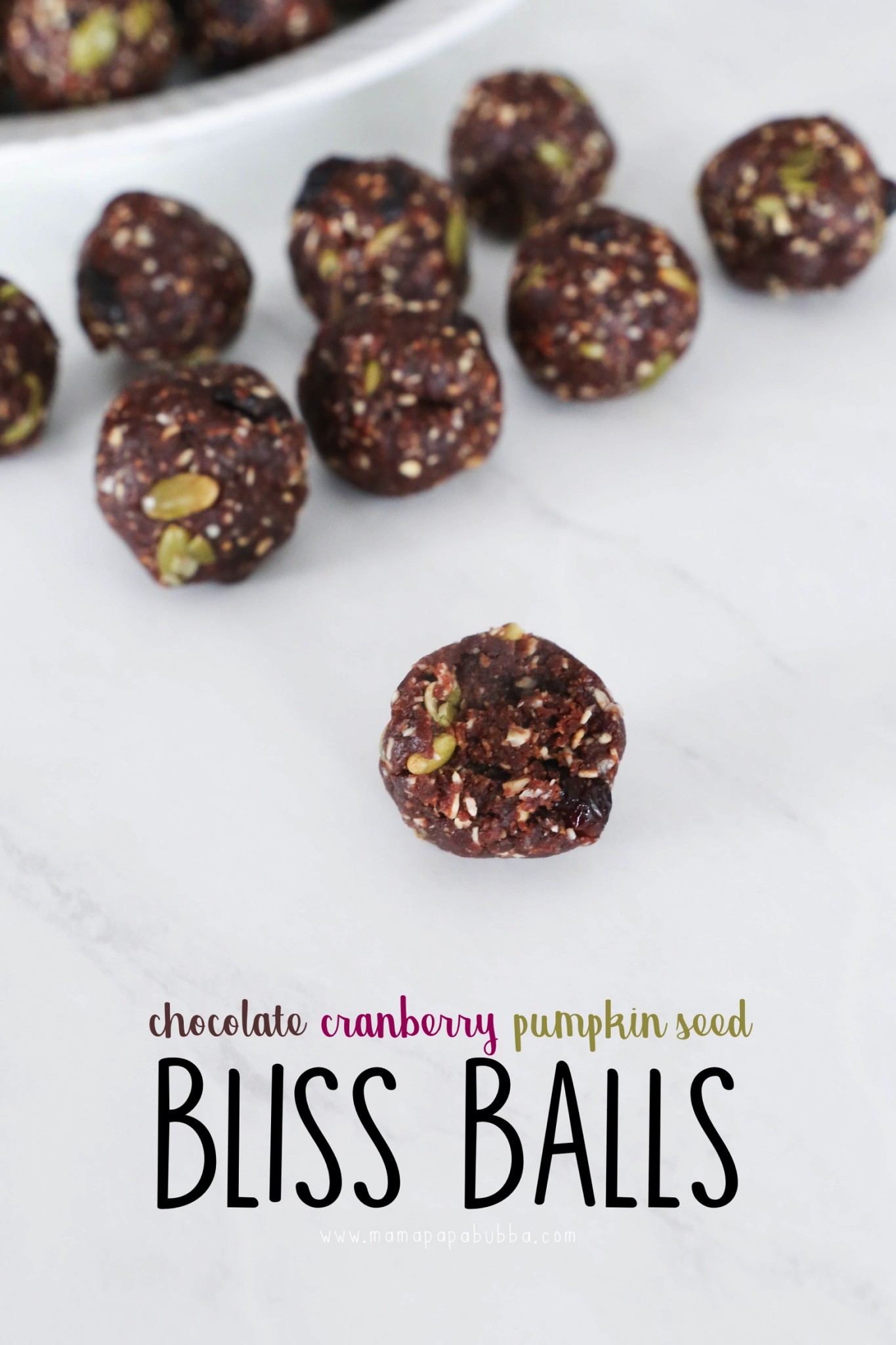 Measure the first set of ingredients into a food processor and process until smooth and uniform.  Add in the old-fashioned oats and process {or pulse} until the mixture starts coming together.  Try not to over process if possible – some texture is good!  Next, mix the cranberries and pepitas into the mixture by hand before scooping out 1 tablespoon chunks, squeezing them in your hand, and rolling them between your palms.