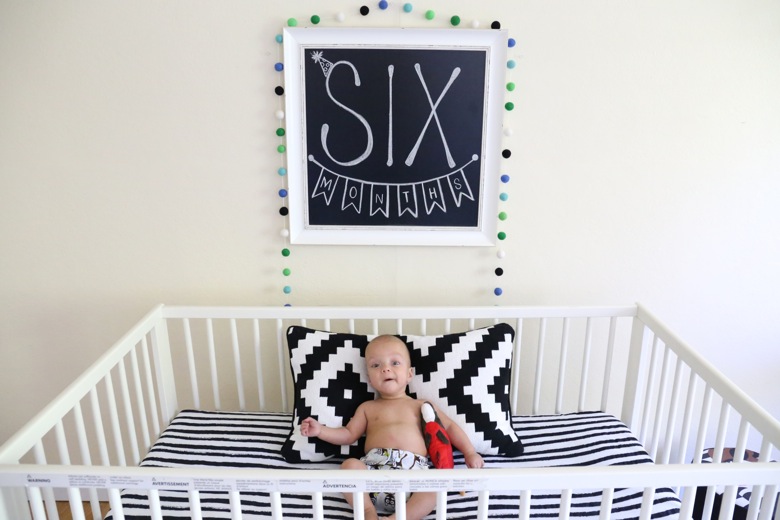 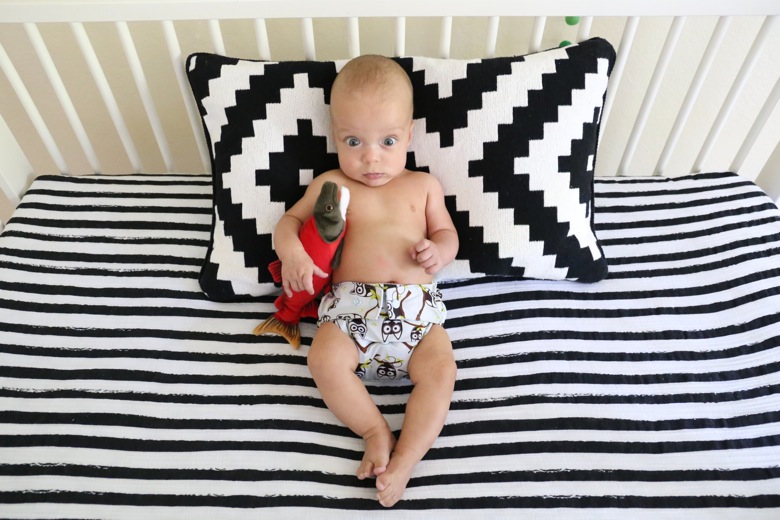 I’m so happy to say that this month has been another good one. Since our rough start and the big shift that happened last month, our boy continues to be a happy and easy to please baby for the most part, which is amazing.  In general, he fusses when he’s hungry or tired, which are both sooooo doable.  Touch wood, but I think our days of crying non-stop are gone, and for that, I’m very thankful. 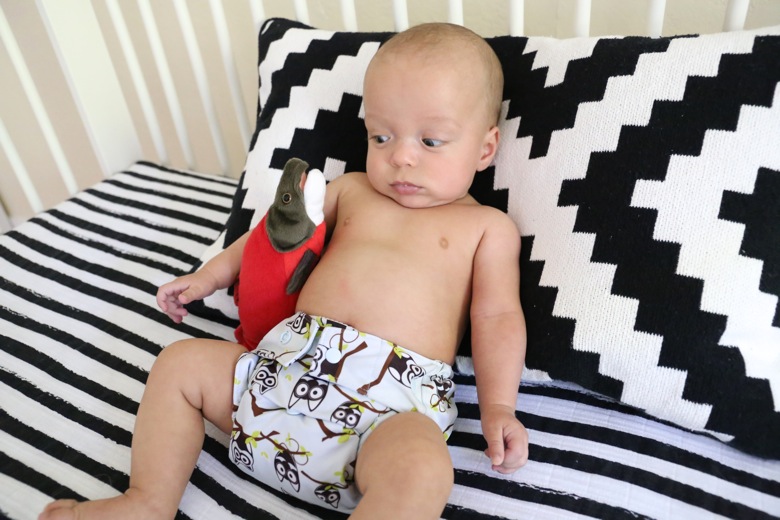 This guy continues to grow at an amazing pace {seriously – you should see his growth chart – the line basically shoots straight upwards instead of following the usual slopped curve} and at this point, that’s a good thing.  Baby boy is making up for lost time and is getting all of the nutrition he needs despite my post-hospitalization supply issues.

Since last month, he’s gained just over a pound, putting him at 13 pounds 9 ounces now.  While it’s not the right way to do it, our GP tracks Sam’s growth on the chart for his chronological age just because it’s what automatically pops up on her computer {his preemie status means that he really should be charted for his corrected age until 30 months}, but the good news is that this month he actually made it onto the charts!  For both his height and weight he’s now in the 3rd percentile {which sounds low but is actually quite fabulous for being charted 3 months ahead} and in the 75th percentile for his head circumference {again, for his chronological age – YIKES}!!  Now while he does come by having a large head quite honestly {you know this if you’ve seen my brother – hi, Gar!}, rapid head growth {and just having a very large head in general} can be a potential cause for concern, so it’s something we’re keeping an eye on.  For now, all looks well and we’re not worried. 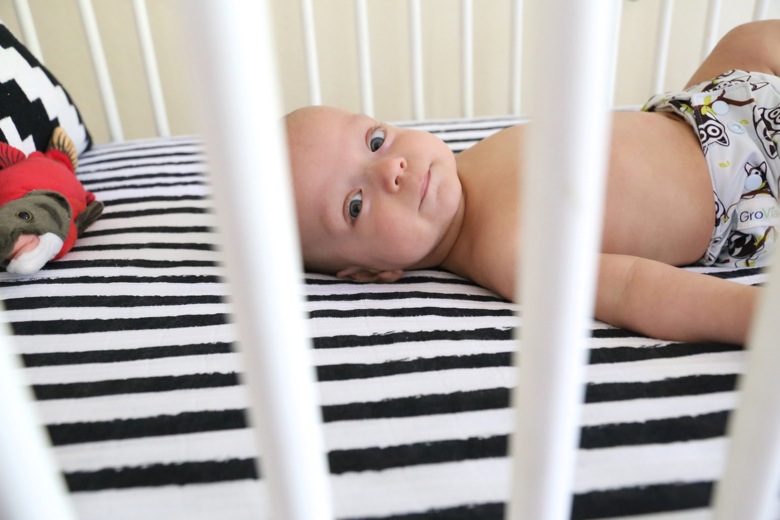 Clothing wise, we’ve officially moved into our stash of 3 to 6 month stuff, and though he does still wear the odd 0 to 3 month item, for the most part they’re too small.  Diaper wise, he’s still in a size medium Happy Baby Cheeks cloth diaper {though we’ve had to switch out his extra small diaper covers for small ones just this week} and if he wears a disposable he’s now in a size 2. 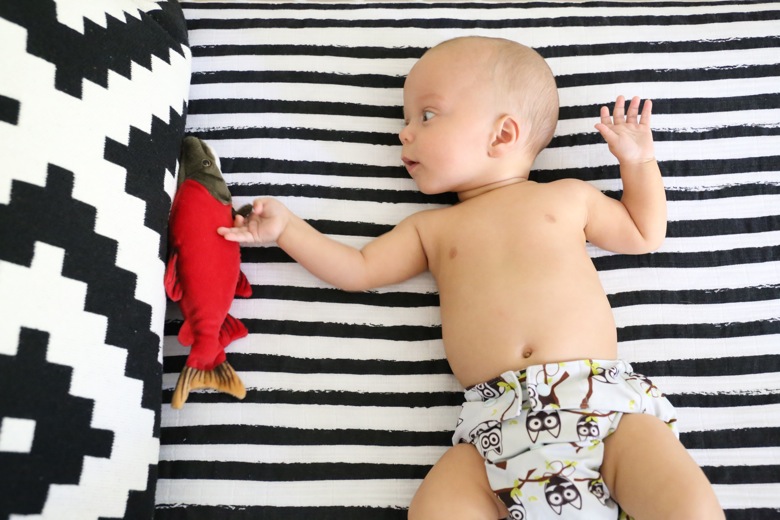 We recently got to visit with our Infant Development Program consultant once again and this time around she actually worked with Sam to see how he’s doing with his milestones.  Because he’s only 3 months corrected {meaning that 3 months have passed since his due date}, we obviously only expect him to be able to do what an average 3 month old can do, and for the most part, he’s doing really well. 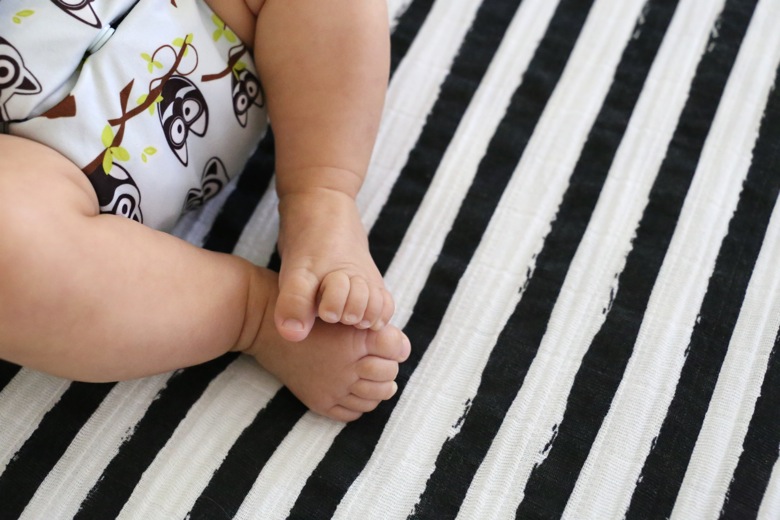 Two things that we already knew {and she confirmed} is that he was very much favouring his right side when it came to both turning his head and grabbing objects, and his neck is still quite floppy {though who can blame him with a body in the 3rd percentile and a head in the 75th?!}  The good news is that with the recommendations she gave us, we saw a huge improvement in both from the time our consultant visited to the time we had our physio assessment later on in the month. 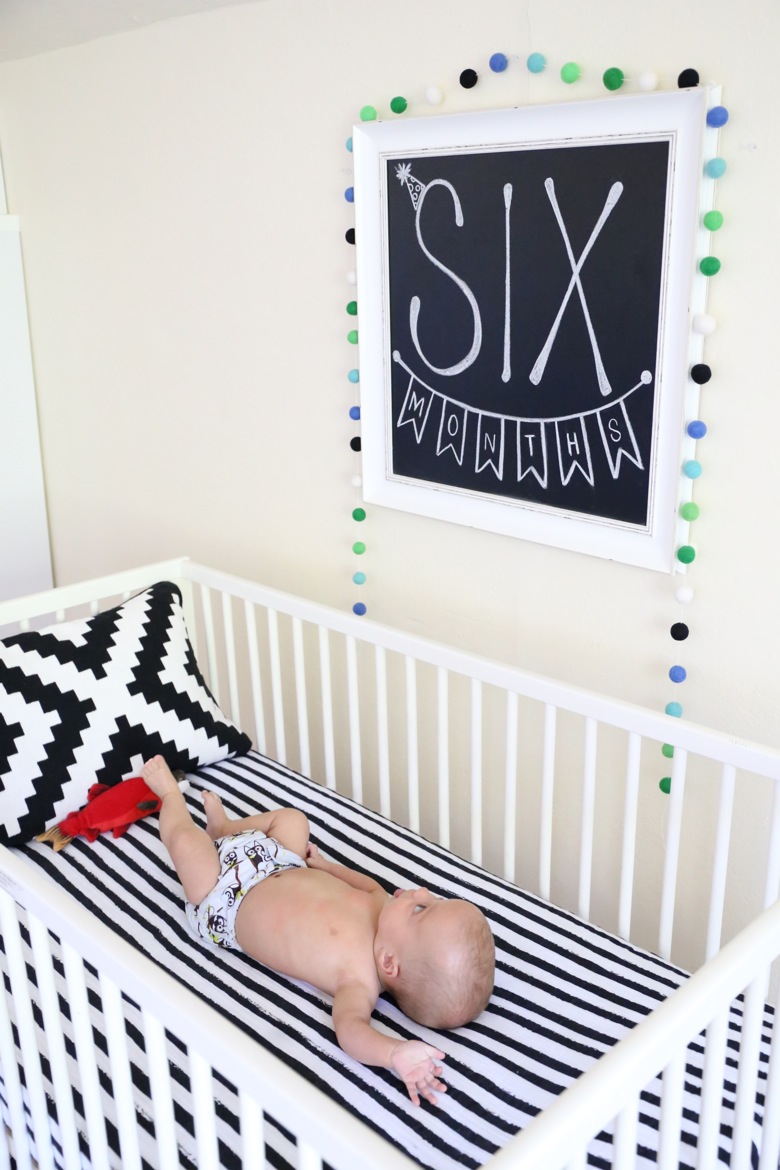 The physiotherapist we saw ruled out torticollis as Sam’s little neck is able to turn 120 degrees on both sides {eek!} and gave us more baby physio exercises to do at home, so we work on those daily for very short periods of time.  The good news is that even though he’s a little behind, he’s definitely getting both stronger and less biased to his right side, which is all we can ask for.  He’ll also be starting physio home visits next month, which should help things along too. 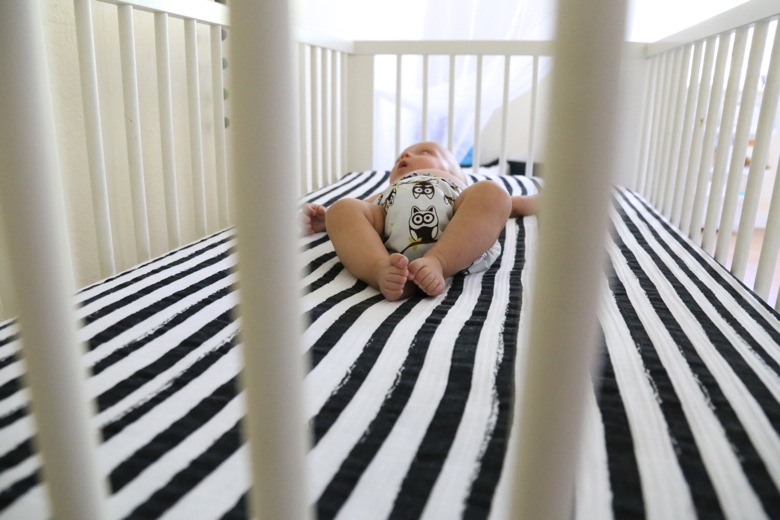 One thing I’ve been asked about quite a lot recently is whether or not we’re starting solids now that he’s 6 months old…  The short answer?  No.  As with most everything else, we’ll only expect him to be ready for solids at 6 months corrected, so we have a few months left yet, though we’ll probably reassess around the 5 month corrected {8 month chronological mark}. 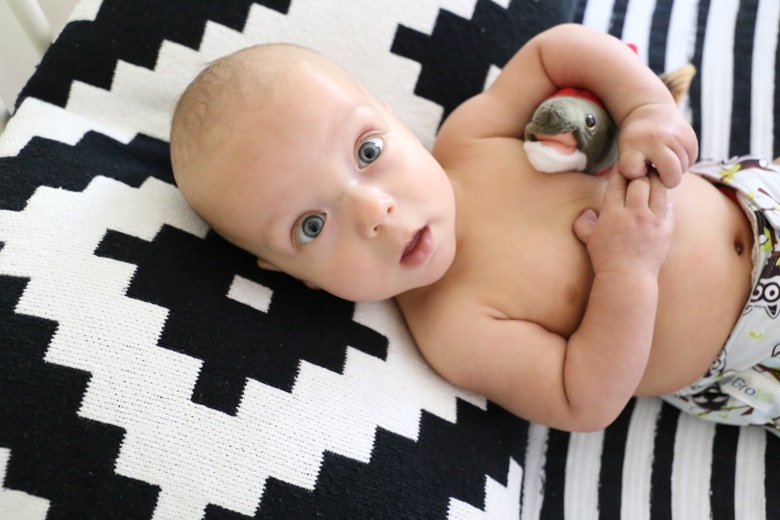 Sleeping wise, and I reeeaaally don’t want to jinx it here, we’ve had our first two ‘sleep through the night’ nights recently!  I know that sleeping through the night means different things to different people, but in both cases we put him down at around 7:00 or 7:30 p.m. and he didn’t wake until 5:30 a.m. – no dream feed or anything!  Of course both times I awoke in a panic and rushed into his room to see if he was still breathing, but hopefully it’ll become regular enough that my full-on panic mode will subside soon.  Daytime sleep remains a bit of a challenge as the times he’s sleepiest tend to perfectly coincide with school drop-off and pick-up, but I do my very best to make sure he gets some sort of sleep around 9:00, noon, and 3:00, and call the day a win if at least one of those is a good, long nap. 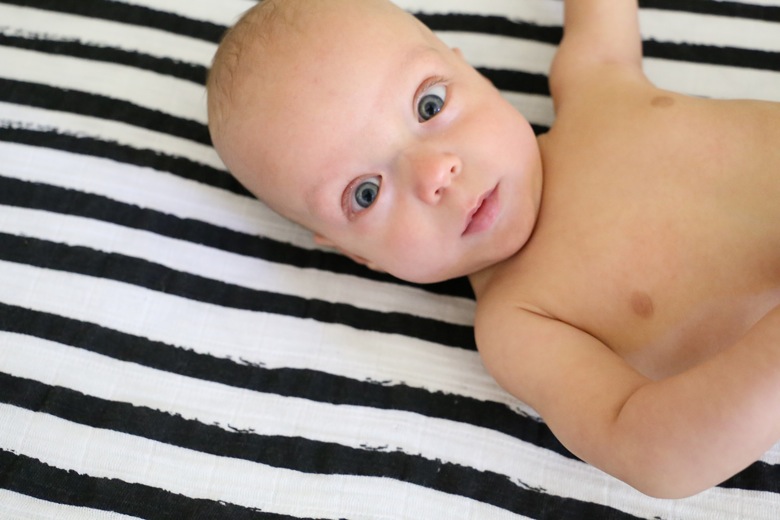 So other than sleeping and growing, what’s this baby boy been up to recently?  First off, smiling!  Lots and lots of smiling.  He loves being chatted to, and if you’re willing to chat with him, he’ll most definitely make it worth your while by flashing you a cheeky grin or two.  Depending on what’s going on around you, he might also chat back to you, which is probably my very favourite thing he does.  When it’s just the two of us alone without a ton of distractions, he’ll chat back and forth with me for a good long while, often making sounds that sound like, ‘hiiiiiii’, ‘okay’, and ‘eh’.  He’s a bit of a charmer. 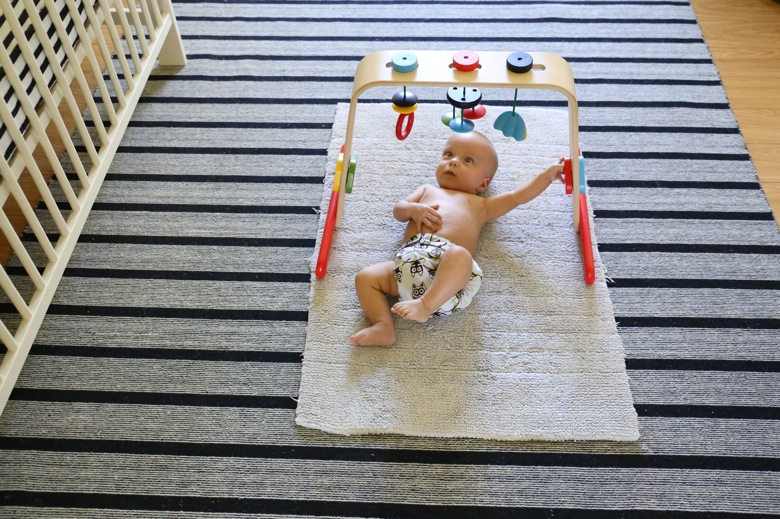 He’s also just starting to get into playing with toys and we spend at least a little bit of time each day playing on the mattress that has now become his play space in the playroom or playing with his little activity gym upstairs.  I try my best to make sure he gets a little bit of ‘independent’ playtime each day {where he entertains himself and I’m nearby but not directly interacting with him} and he really quite enjoys it, actually. 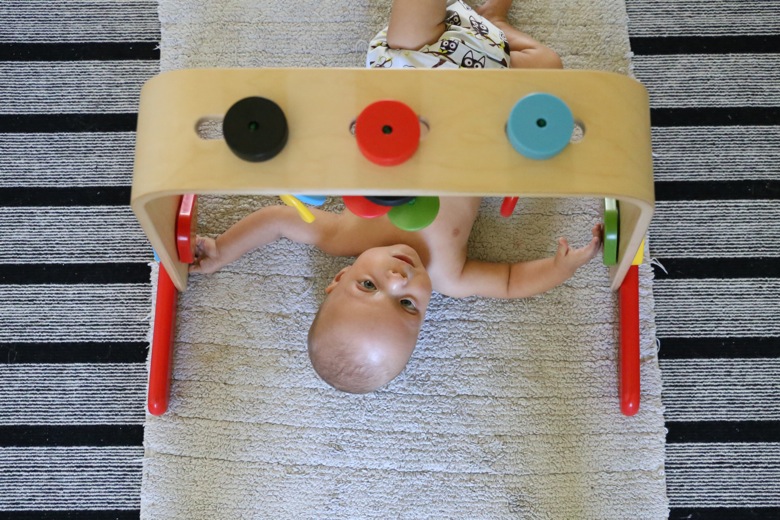 Other things he loves?  Water {sometimes I think he’d like to jump right into the pool while at his big sister’s swimming lessons}, his big sister, his red balloon {which sadly has seen its better days}, his nightly massage, his new chain toy, going for strolls outdoors, and smelling things {I try to let him smell different ingredients while I’m cooking and baking and he had the best reaction when I put the vanilla bottle under his nose the other day – total excitement!}

Things he doesn’t like at the moment?  Sadly, being in his carseat…  I’m not sure what’s changed, but it’s often tears the moment he’s strapped in and while he used to just snooze in the car, now he often cries instead {not fun, so we’ll see how our upcoming trip to the Okanagan goes}. 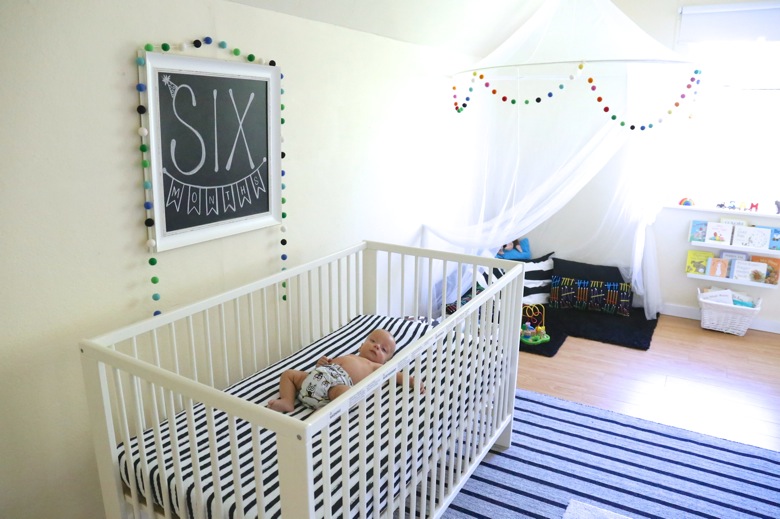