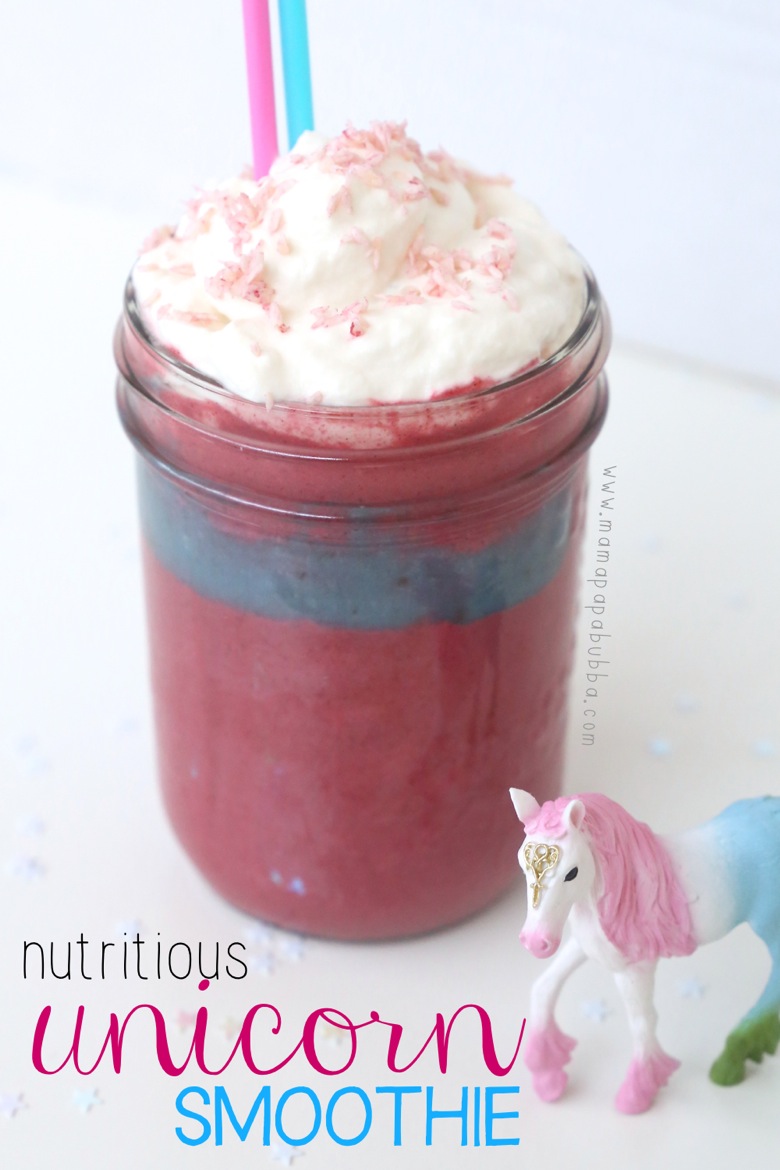 A couple of nights ago I went to my usual nearby Starbucks to plow through a bunch of emails and get some work done, and oh my goodness…  It was total unicorn frappuccino madness!  I was sitting at the back right next to the the drink bar and I’m fairly certain that 75% of the orders made during my 3 and a half hour stay were fluorescent blue and pink fraps.  Even when they ran out of the blue drizzle, whipped cream, and both blue and pink sprinkles, people still ordered them!  Prior to actually seeing them first hand, I think I’d maybe heard mention of unicorn fraps once or twice on social media, but I truly had no idea what a craze they were causing – the entire store was buzzing with unicorn frap excitement.  {Kudos to you for a pretty brilliant marketing campaign, Starbucks!}

It goes without saying that I didn’t try one {not my thing}, but I’ll fully admit – they’re super pretty!  The vibrant pink immediately reminded me of the smoothies Catherine of Weelicious makes on her Insta Stories using PitayaPlus Dragon Fruit Smoothie Packs, which led me to the idea of making our own version…  A  nutritious unicorn smoothie version!

Now I can’t guarantee that our version tastes like the real thing {I’m sure it doesn’t in fact}, but during the unicorn frap madness, I heard that it was super sweet, sour, tangy, made with white chocolate drizzle, and mango flavoured, so I just took that eavesdropped info and ran with it. 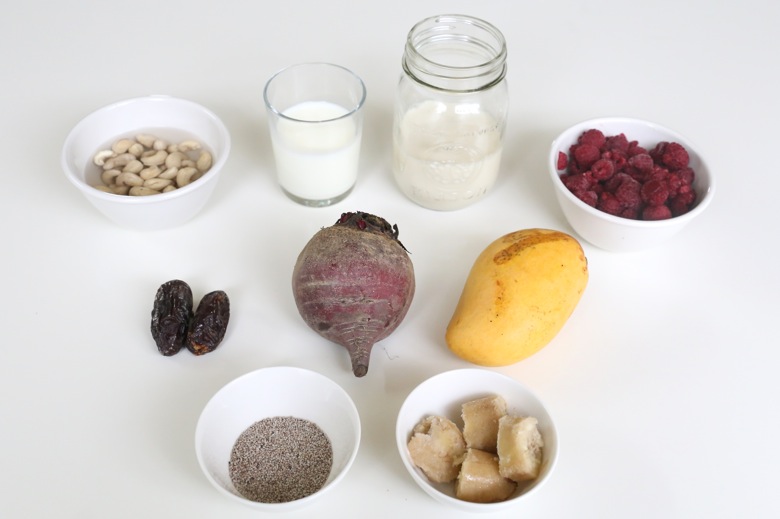 Sadly, Whole Foods didn’t have the dragon fruit packets like I’d hoped they would, but by that point I’d already committed to surprising Miss G with a unicorn smoothie in my mind, so I settled on raspberries and beet instead.  It didn’t turn out the perfect colour I’d imagined, but it did turn out a bold pink and Miss G was thrilled with it, so a win nonetheless.

Besides the raspberries and beet, I used a full {delicious} mango for flavour, a frozen banana for thickness and sweetness, a couple of dates for extra sweetness, some white chia for added nutrition, some soaked raw cashews for protein and creaminess, some kefir for the tanginess and probiotics, and some almond milk to bring it all together. 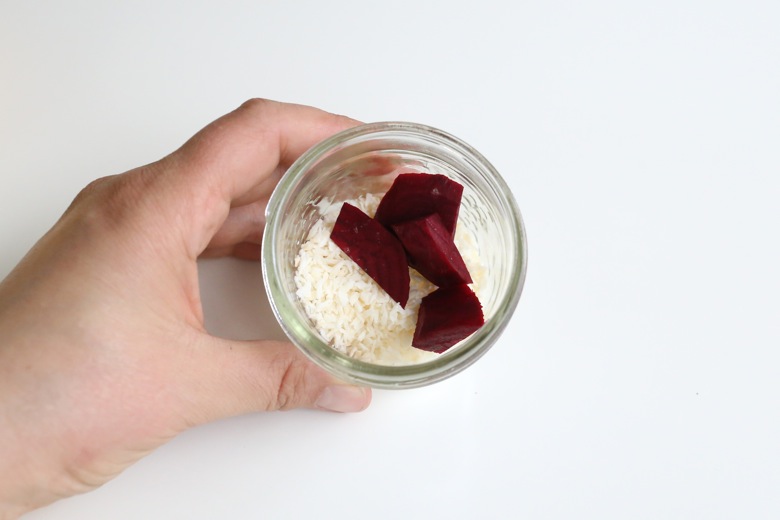 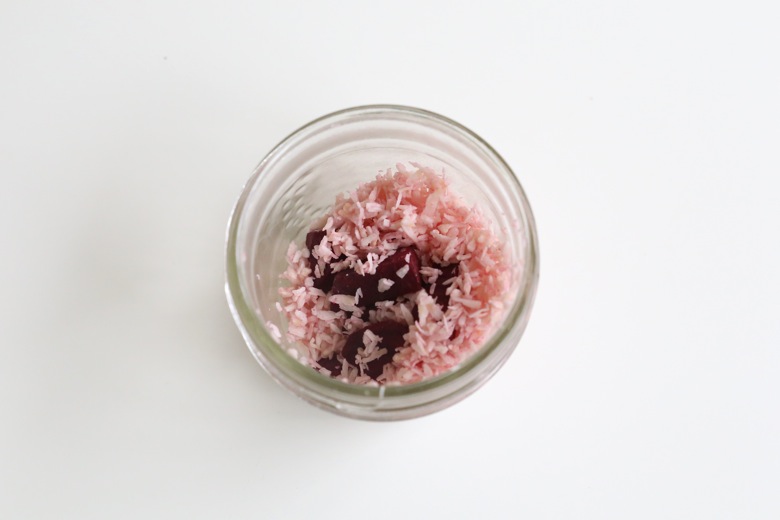 But before actually blending up the smoothie, I wanted to make sure I had all of the parts ready to go first…  My go to sprinkles alternative?  Coconut!  And in this case, I dyed them pink simply by shaking them in a little jar with a few pieces of raw beet. 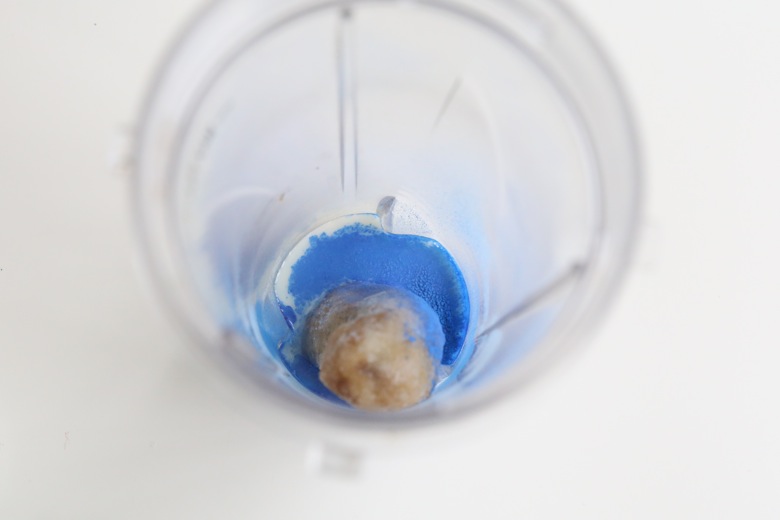 Next up, my blue drizzle.  I’d overheard the barista say that this was just white mocha sauce and blue powder, so I decided I’d make my own version using half of a frozen banana, a tiny splash of almond milk, and some natural blue spirulina colouring I had leftover from the ocean ice cream cups I’d made for Miss G’s birthday last year.  {Had I not had the leftover spirulina stuff, I’d have just tossed a couple of frozen blueberries in with the banana instead.  It definitely would have been more purple, but I don’t think anyone would have minded!} Once it was good and smooth, I popped it into the freezer so it would stay thick until needed. 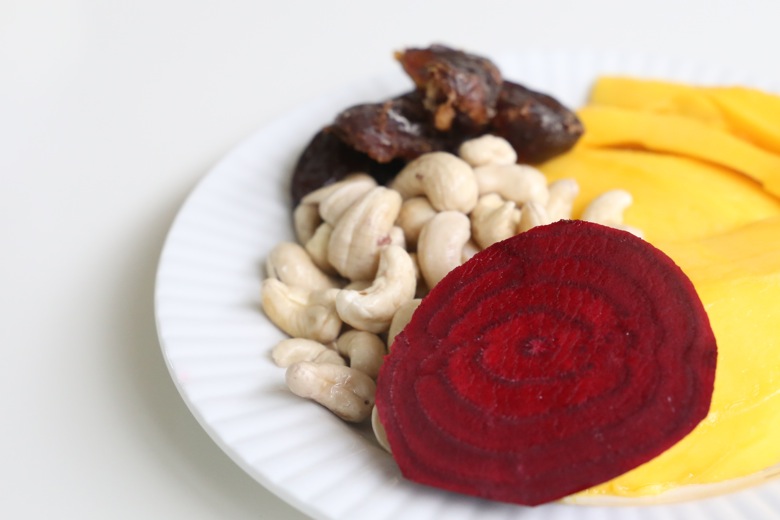 I quickly whipped up some fresh cream {with a little pure maple syrup and good vanilla}, and then it was back to the main smoothie.  I strained my cashews, pitted my dates, peeled my mango and removed the fruit, and chopped off a very thin slice of raw beet (though I probably really only should have used half). 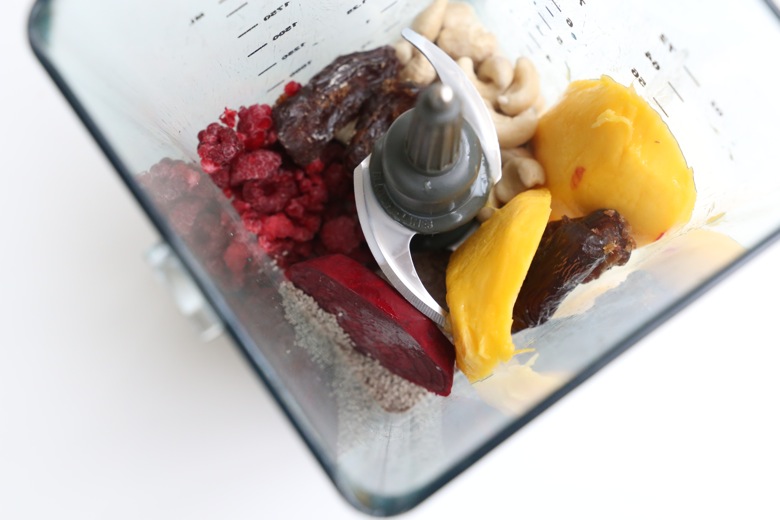 Then everything went into our Ninja! 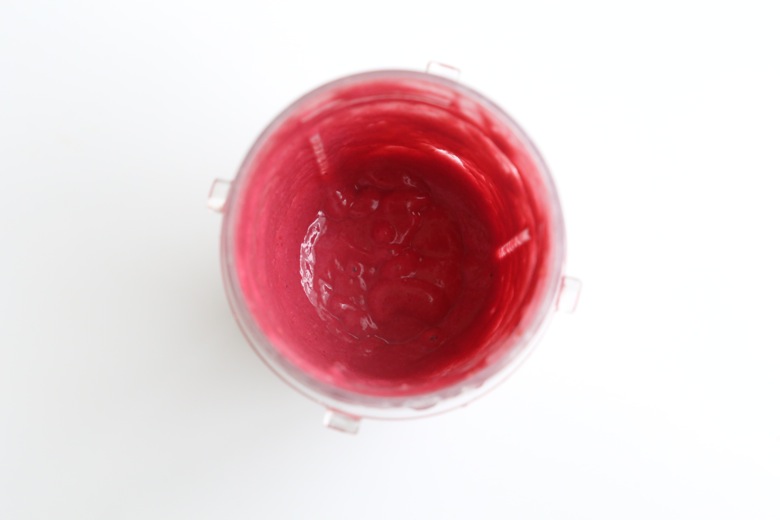 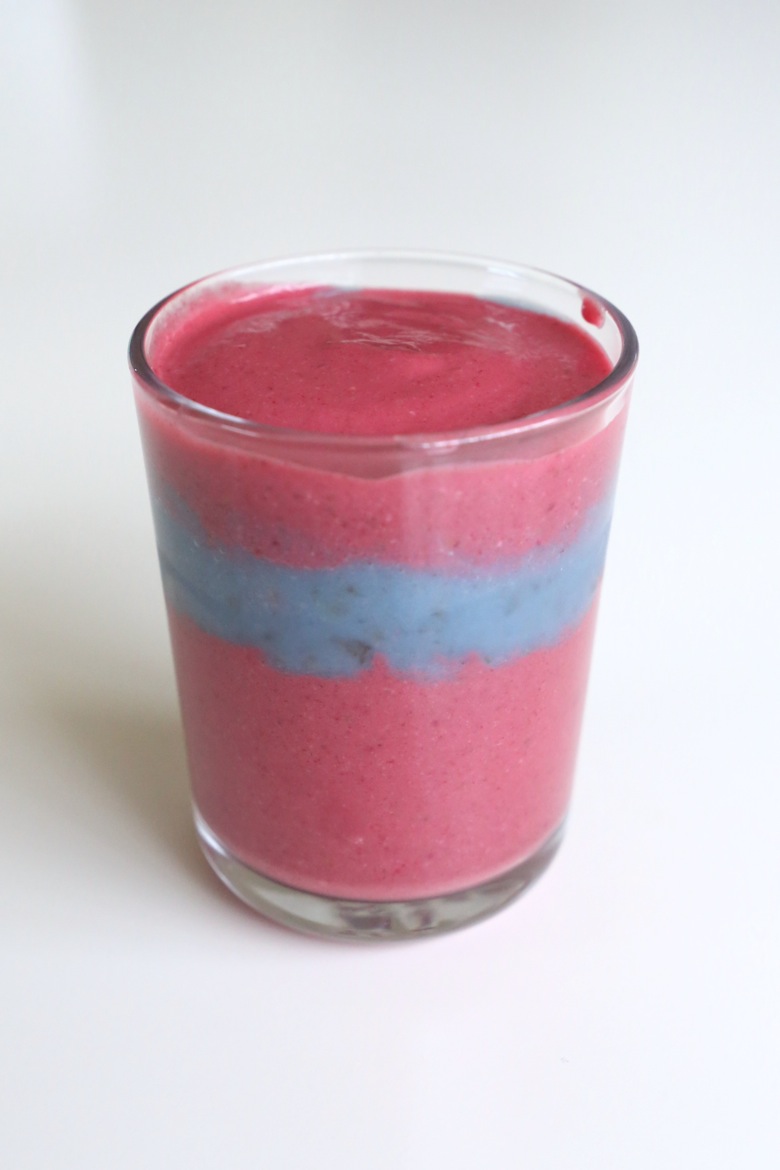 Then it was time to assemble our smoothies…  To do so, I filled the cups about two thirds of the way full with pink smoothie, added the blue drizzle around the inside of the cup using a squeeze bottle {though sadly it didn’t keep its zigzaggy shape}, and then filled the cup the rest of the way with more pink smoothie. 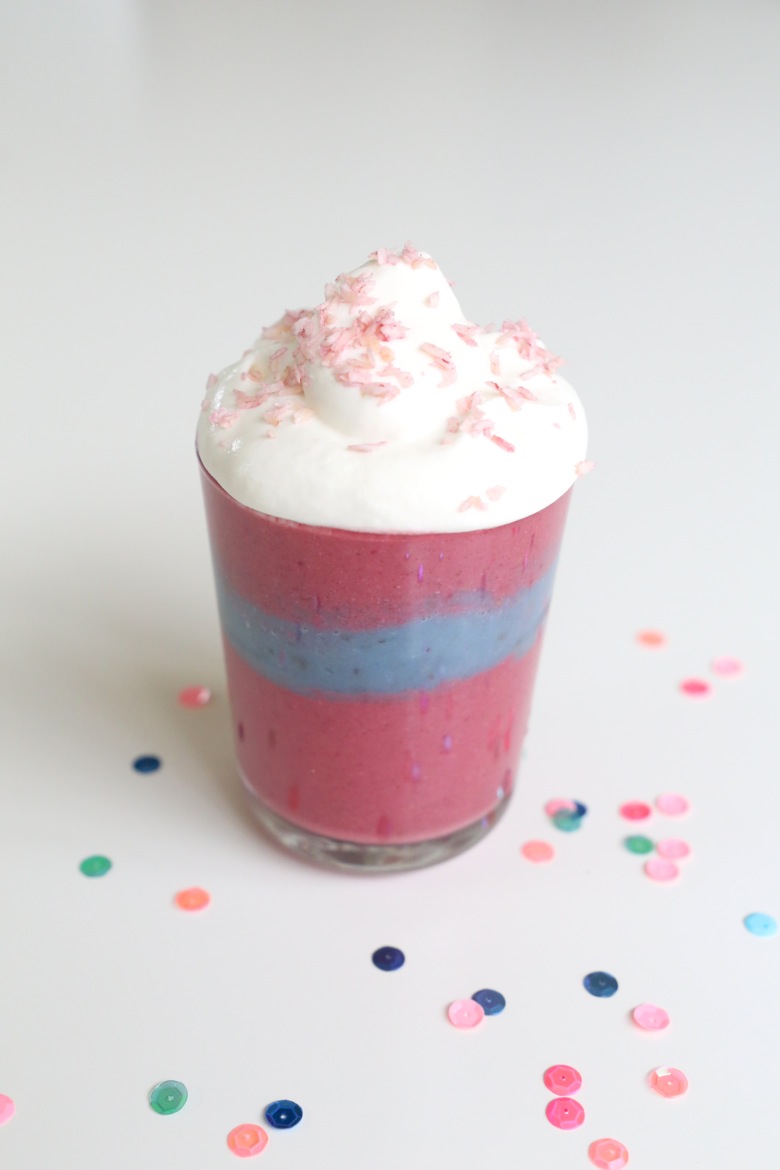 Then it was time for a very generous helping of whipped cream {Miss G’s favourite!} and some pink coconut sprinkles. 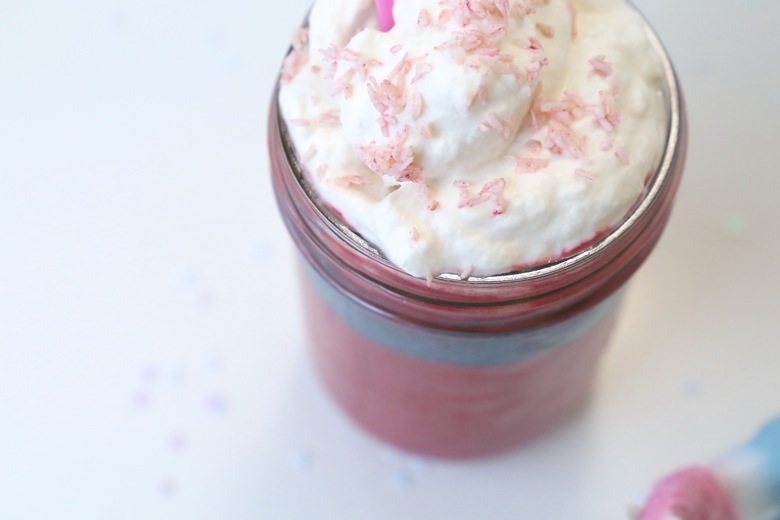 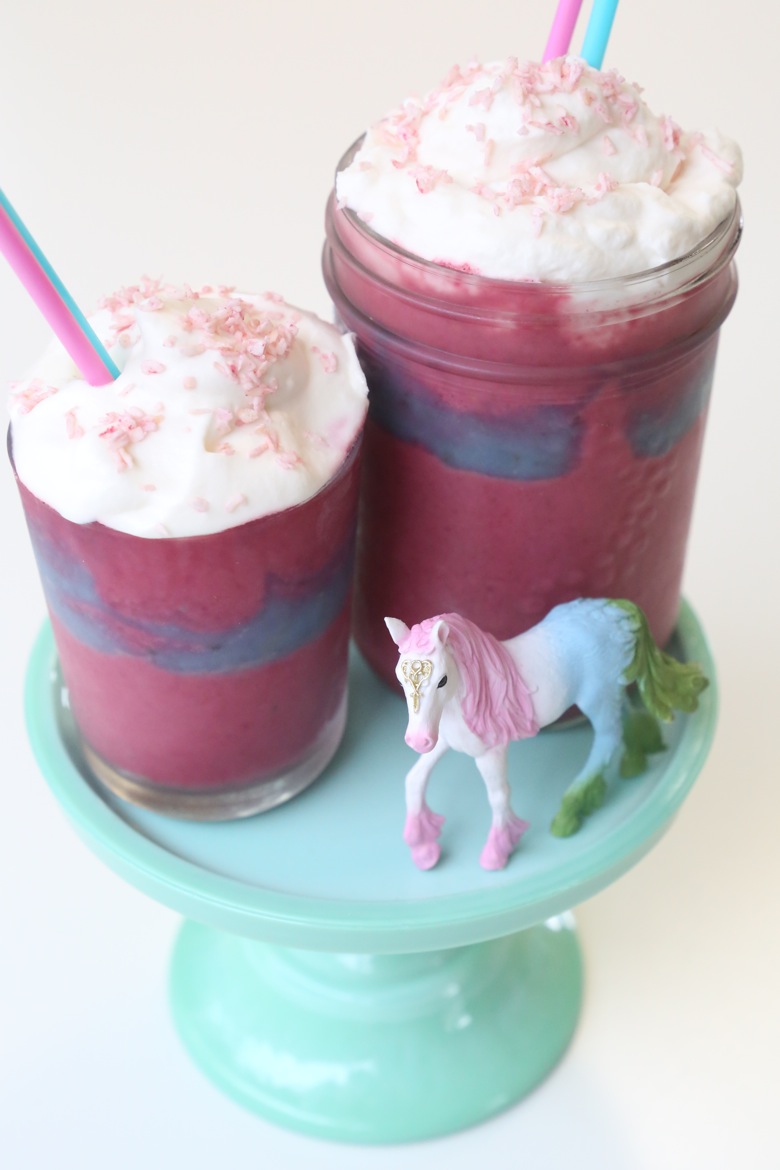 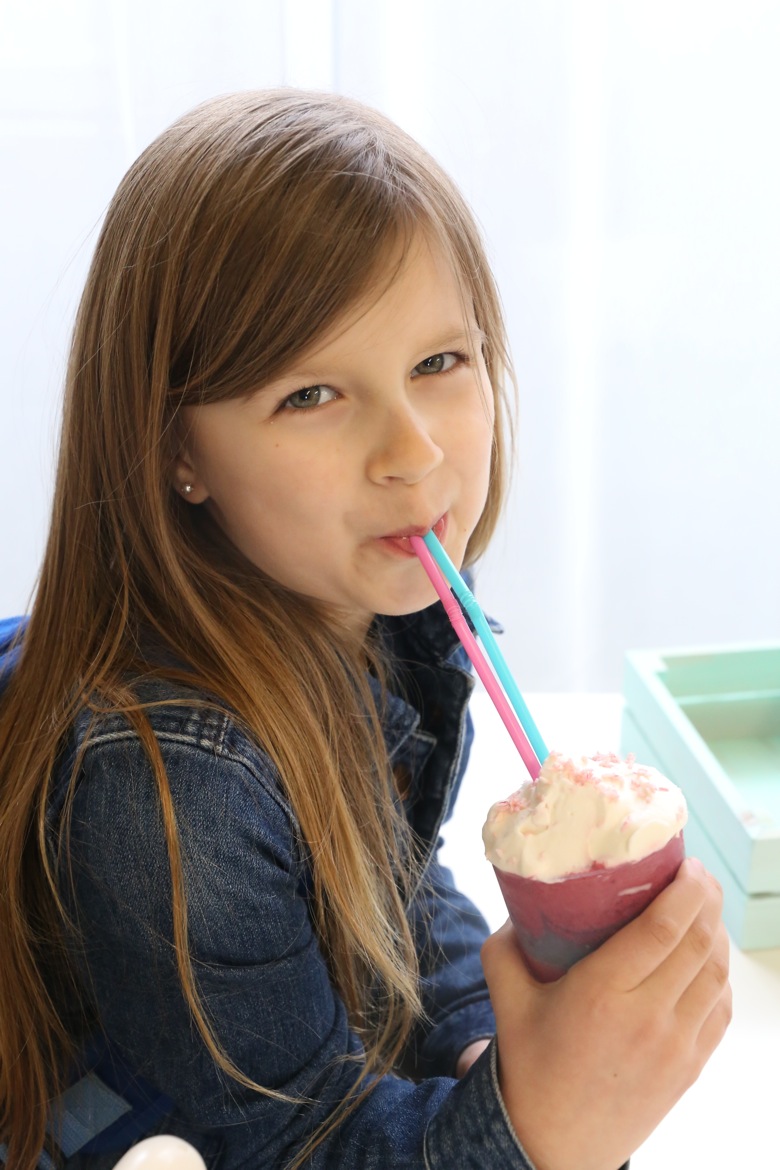 I wish I would have caught Miss G’s expression when she walked in the door and found these waiting for her and her papa… she was so excited! 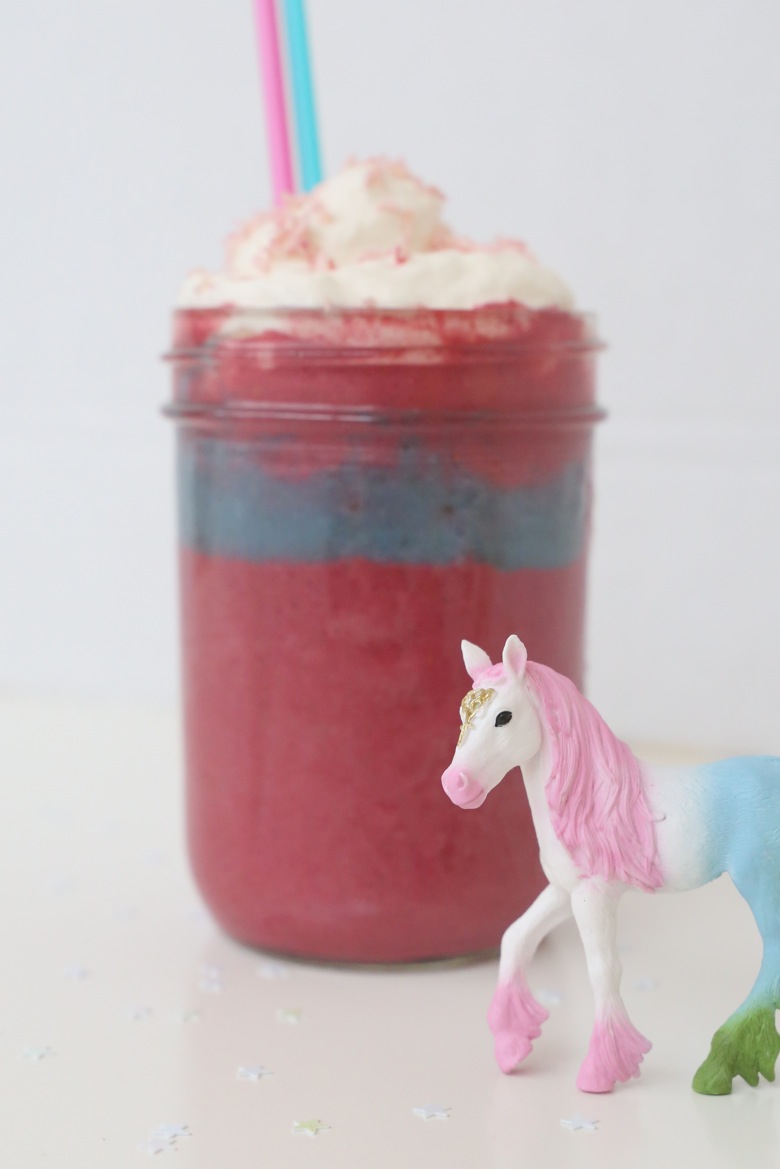 {Like my unicorn smoothie mascot that’s actually a horse?!  Haha!}

For the blue drizzle:

For the coconut sprinkles:

For the whipped topping:

For the pink smoothie:

Place the coconut and chunks of raw beet into a jar and shake vigorously until your desired colour is achieved.  Dump the jar contents out on a plate, remove the beets, and allow the coconut to dry.

Place the frozen 1/2 banana, splash of milk of your choice, and spirulina colouring into a small blender jar and process until smooth.  Transfer into a small squeeze bottle and place in the freezer until ready to use.

Using a hand or stand mixer, whip the cream until thick and fluffy.  Add the vanilla and natural sweetener of your choice to taste and whip for a little longer.  Place in the fridge until ready to use.

Place all of the smoothie ingredients in a blender and blend on high until the mixture is completely smooth.

Fill a glass 2/3 of the way with pink smoothie.  Squeeze the blue drizzle onto the inside of your glass and carefully spoon more pink smoothie on top until the glass is full.  Top with a generous amount of whipped topping and sprinkle pink coconut sprinkles on top.