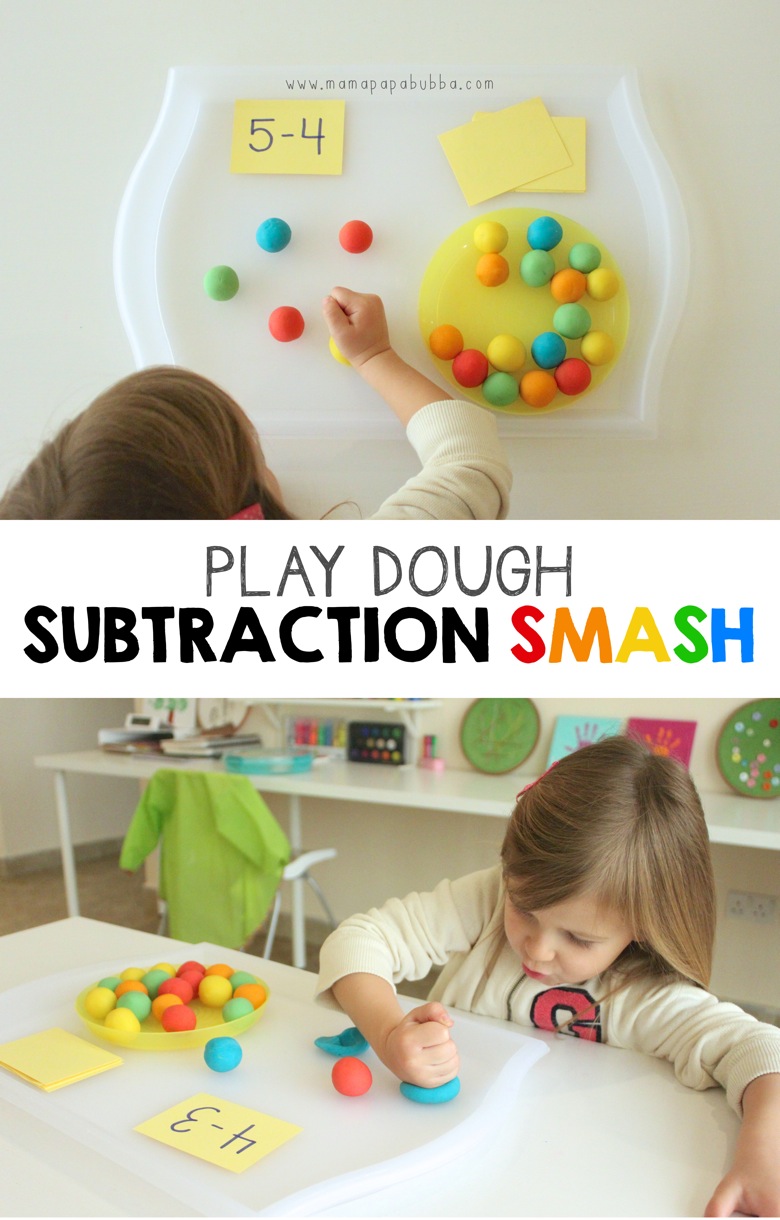 This morning when we woke up to a miserable windy, dusty, trash-floating-through-the-air sort of day, Miss G and I opted to stay in and have a quiet day at home.  We made a big pot of oatmeal, read stacks of books, played some games, built puzzles, and then played this super fun and simple play dough subtraction smash game I came up with a few days ago. 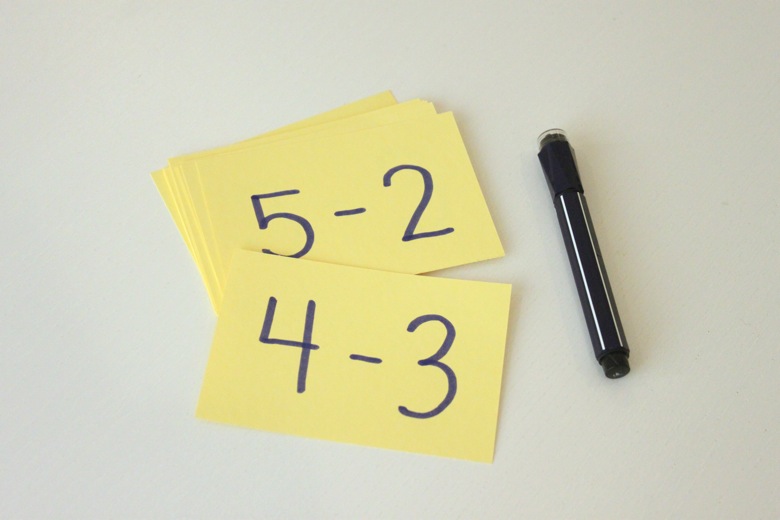 I don’t remember how the idea came to me exactly, but Grae loves play dough and is very interested in ‘doing math’, so I knew she’d enjoy this one.  To start out, I simply took some card stock, chopped it into small rectangles, and wrote out some basic subtraction questions using a marker. 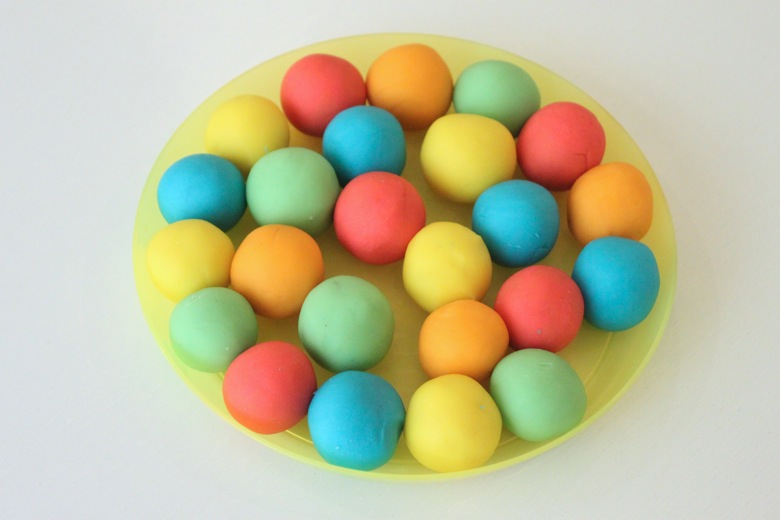 Then, I took our collection of rainbow play dough and made a whole bunch of balls. 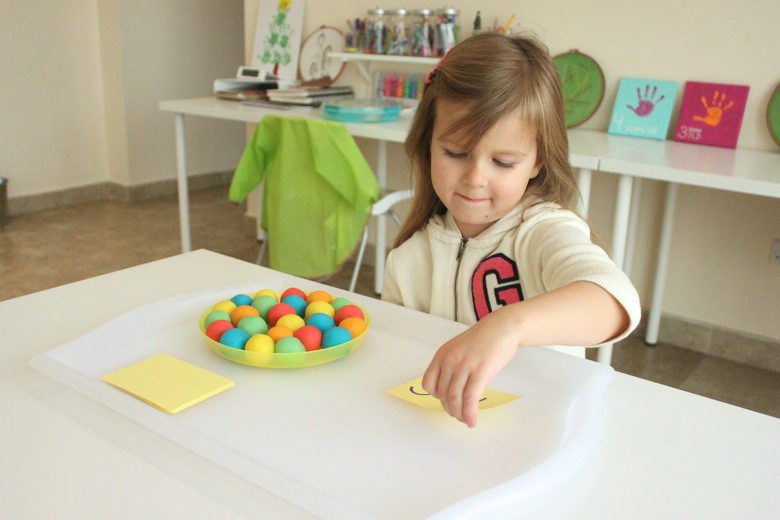 I grabbed one of our many plastic Ikea trays, and then we were ready to play!  {We set up our game so that the subtraction cards were face down on one side of the tray along with the play dough balls, and left the other side open as our game space.}  Playing was super simple.  Grae would flip over a card and read the question for us… 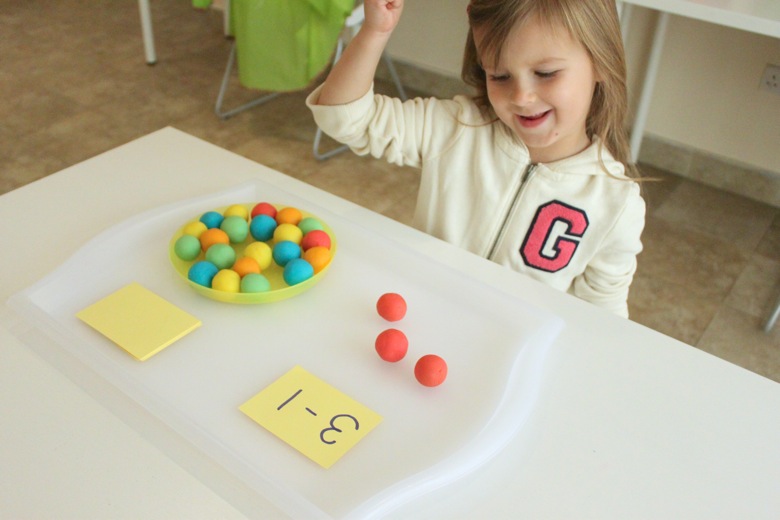 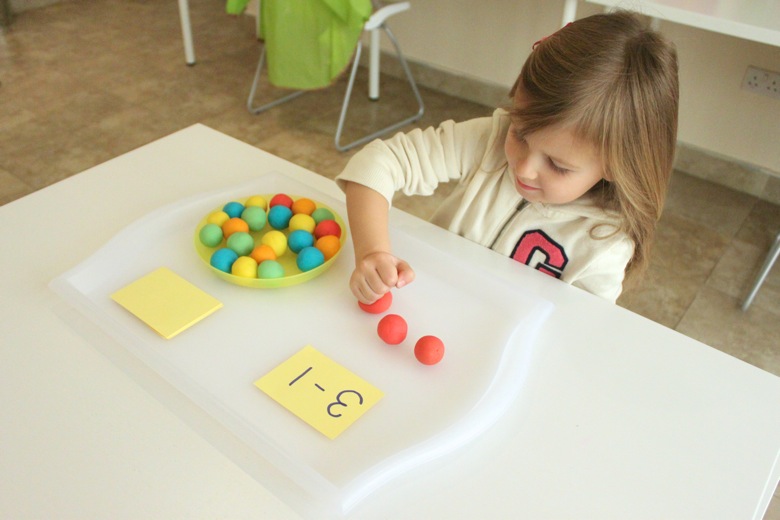 And ‘smash’ the number of balls we needed to take away {which would inevitably cause all sorts of giggles}. 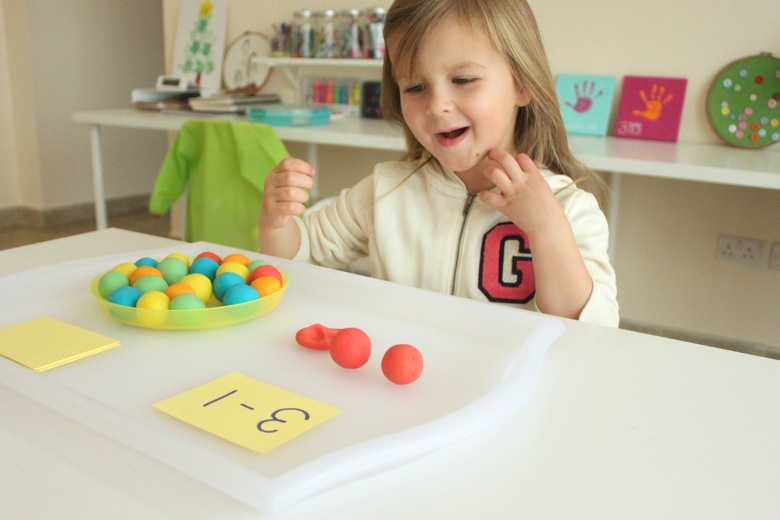 Then she’d announce how many were left, often saying the entire equation aloud {‘three take away one equals two!’} before placing the remaining balls back on the plate and putting the card and the squished balls in our discard area. 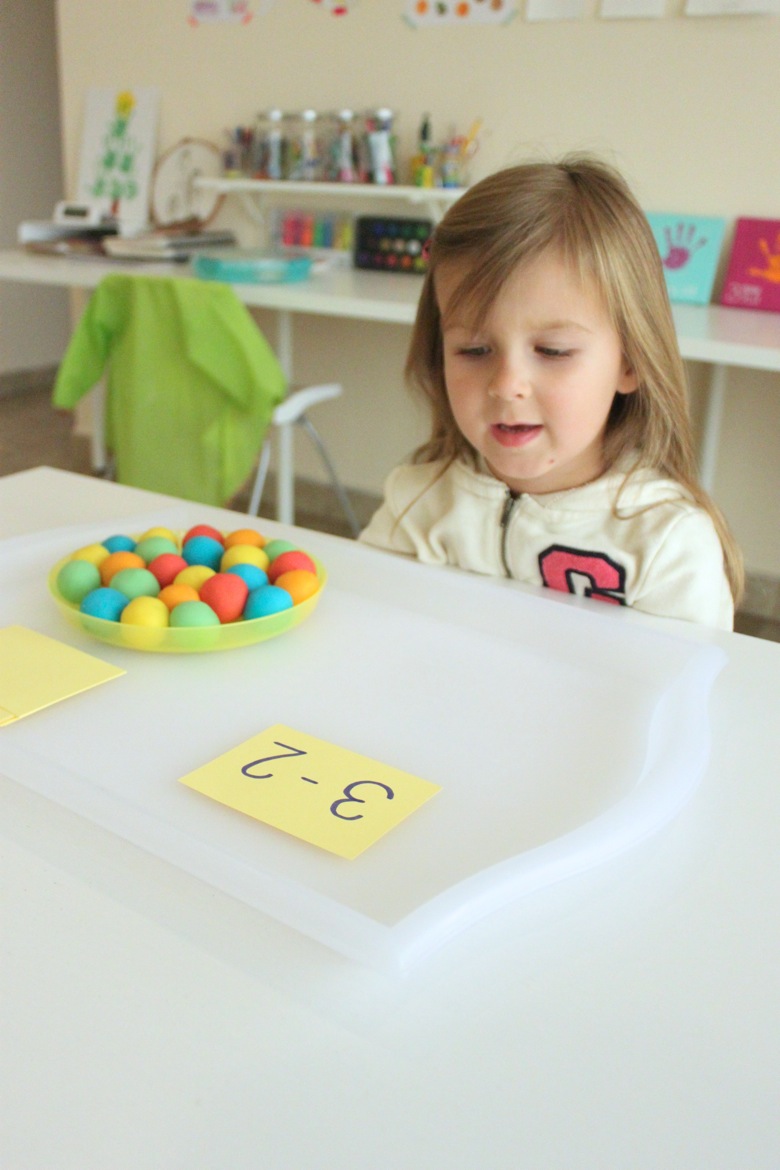 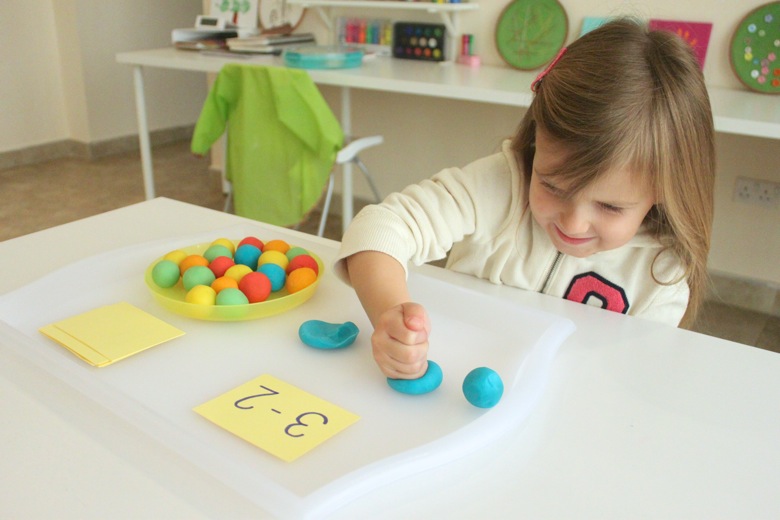 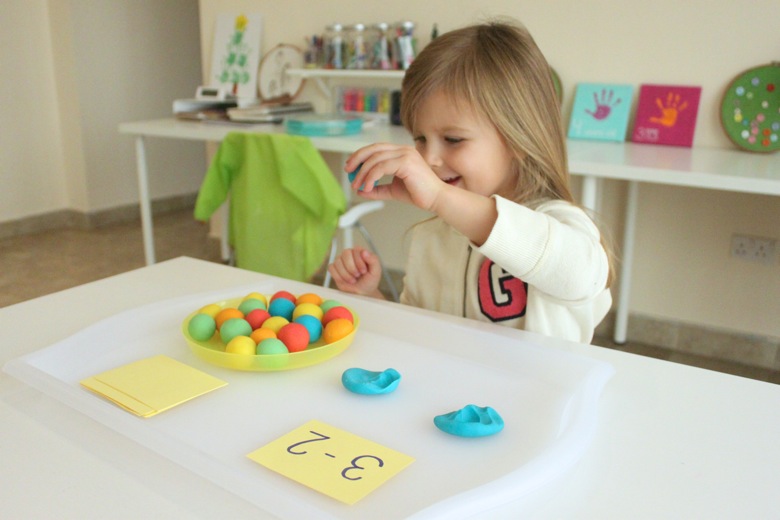 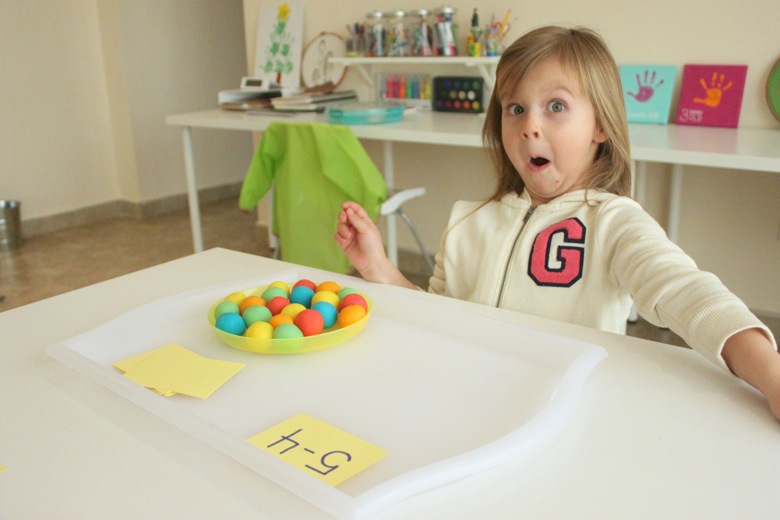 And it remained really fun and exciting each time {as you can see!} 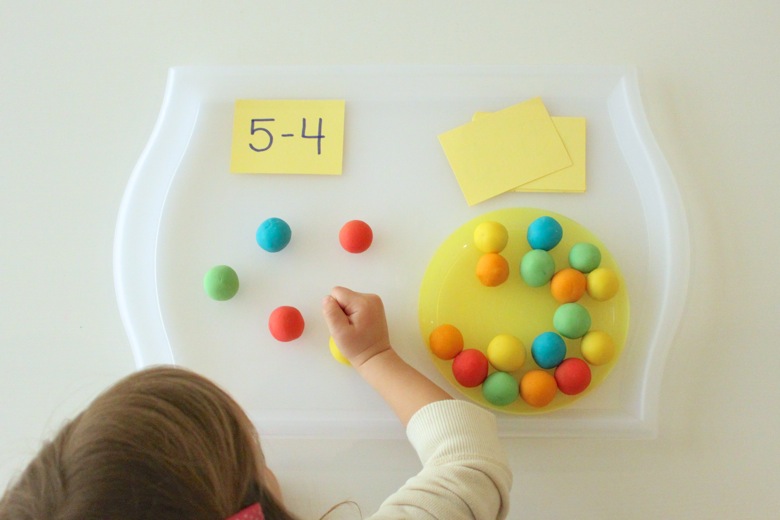 We’ll definitely be playing with this more in the future, so we simply placed our entire plate of play dough balls into a large zip-close bag, put everything neatly on our tray, and left it out on her creative table for the next time she feels like exploring subtraction.  ☺

Here she is in action…  We were being incredibly silly at this point and she wanted to show her Papa what we were up to, so this is the little video I took to send to him.

Looking for some playful addition ideas?  Check out these: